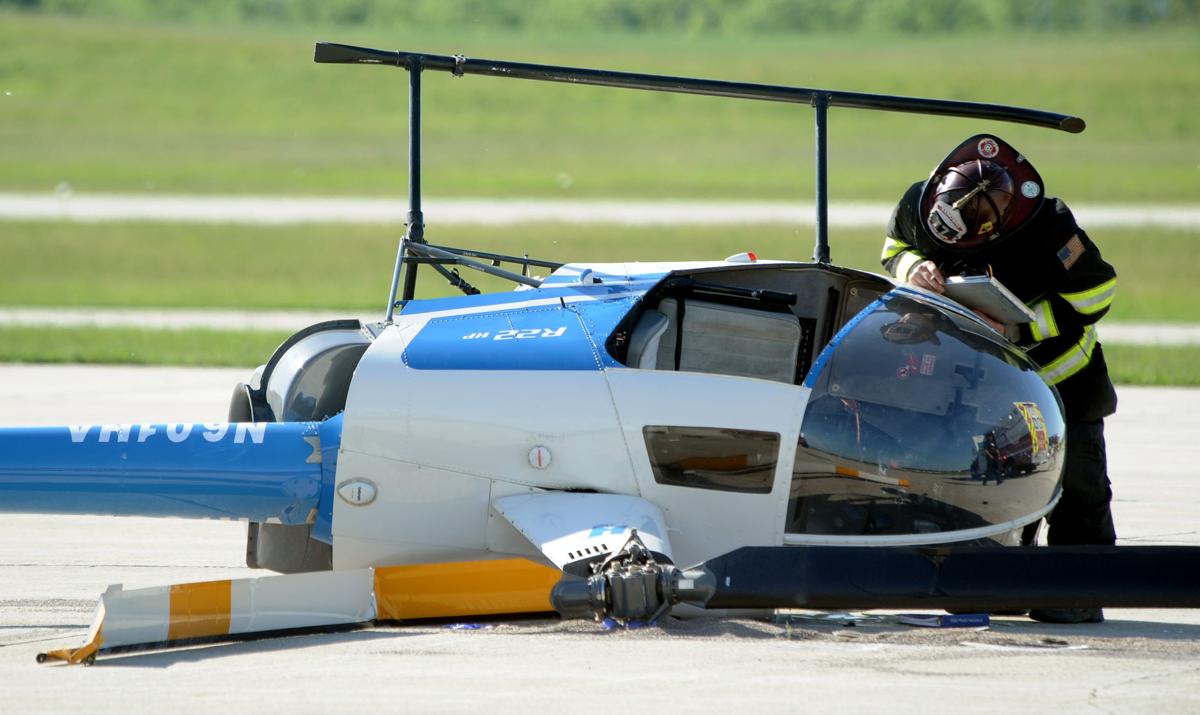 A firefighter gets information from a two-bladed, single-engine utility helicopter that crashed at the Kenosha Regional Airport last month. 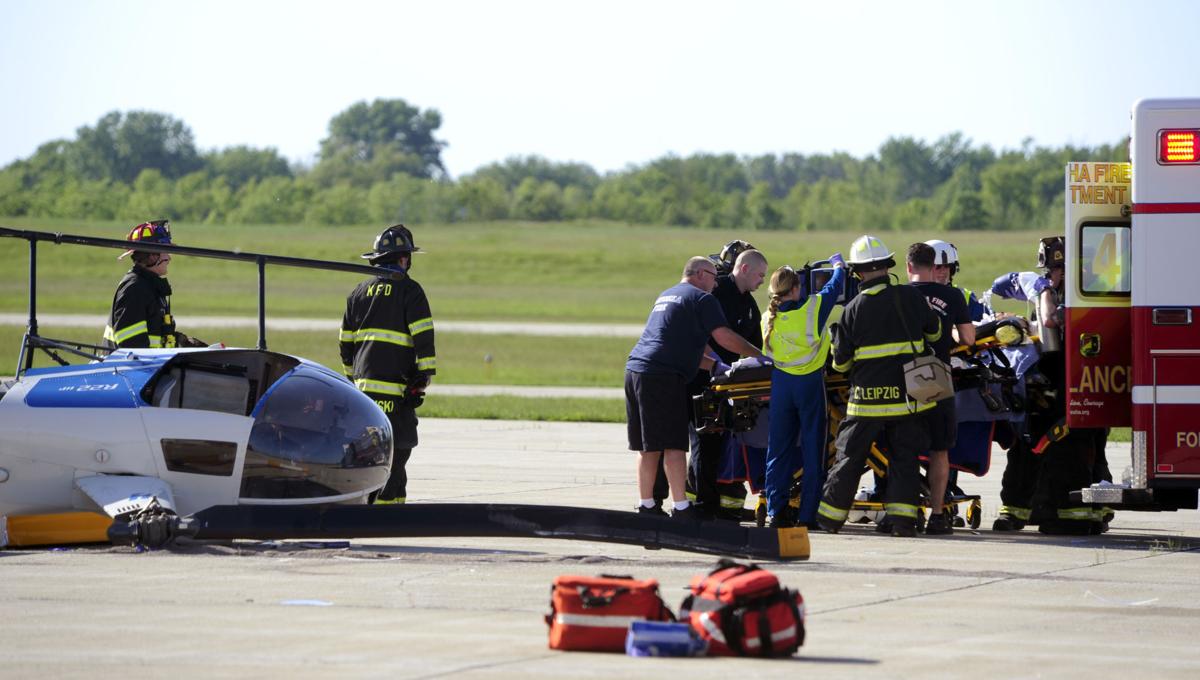 Rescue personal tend to the occupant of an R-22 two-bladed, single-engine light utility helicopter that crashed at the Kenosha Regional Airport Sunday afternoon. 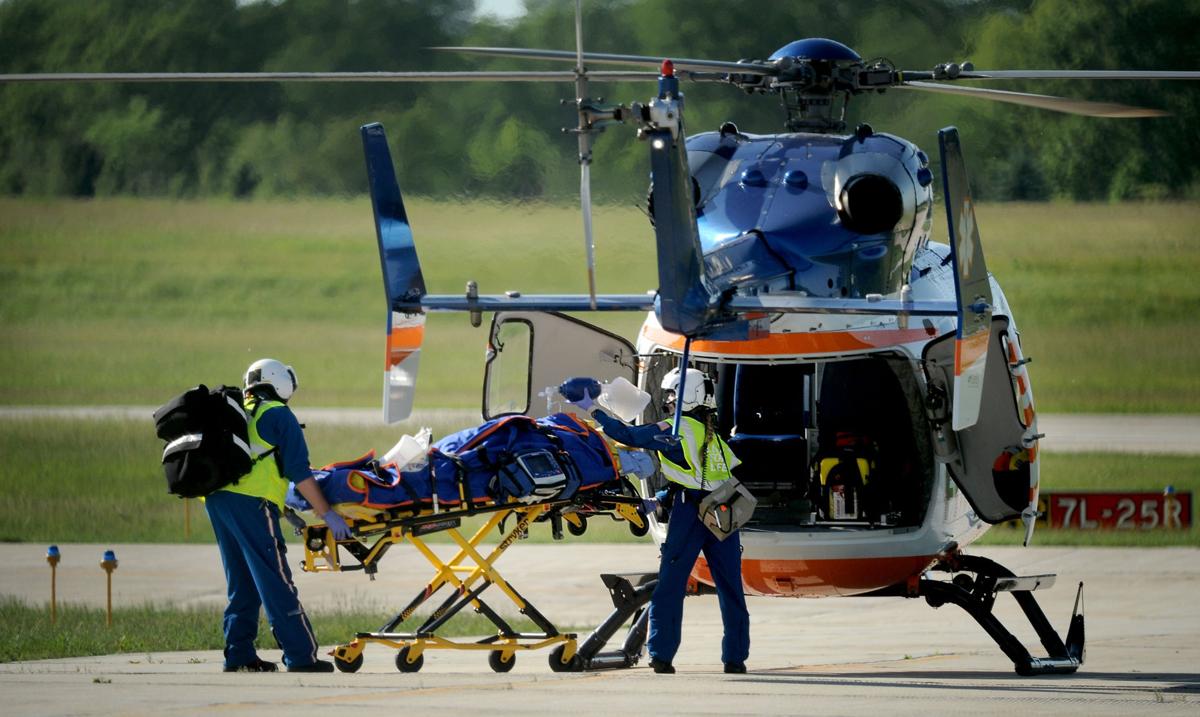 A helicopter pilot suffered critical injuries Sunday after his aircraft crash at about 4:30 p.m. at the Kenosha Regional Airport.

The pilot, an unidentified male, was the only one on board, Kenosha Fire Department Chief Charles Leipzig said. A Flight for Life medical helicopter was called to transport the man, most likely to Froedtert Hospital in Wauwatosa, Leipzig said.

The pilot was coming back from a flight and started to hover and lose control of the aircraft at about 35 feet, Leipzig said.

The pilot was trapped in the helicopter for about two to three minutes after impact, he said.

According to Sgt. Leo Viola with the Kenosha Police Department, a witness saw the helicopter wobble and lose control.

“We had just landed,” Loren Thompson, another pilot in the area, said.

That piece of metal could have been the tail rotor, which is responsible for the stability of the aircraft, Thompson said.

“You look up and there it is,” he said. “Three seconds and it was over.”

No smoke or flames were present during the crash, Thompson added.

The registered owner of the helicopter is A-Z Leasing LLC in Kenosha, according to FAA registry of the craft. It was manufactured with Robinson Helicopter Co. with a certification date of Aug. 24, 2015.

The investigation has been turned over to the Federal Aviation Administration.

A warrant was issued Friday for Justin Hirsch, 28, of Kenosha,who allegedly beat a friend and stole her car.

One person in Racine County, a man in his 70s, has died from complications related to COVID-19. It marks the first death caused by the novel coronavirus in the county, one of more than 35 deaths reported statewide.

On Feb. 29 Patti Fitchett officiated at the funeral of Kenosha resident Patricia Falduto-Miethke.

A firefighter gets information from a two-bladed, single-engine utility helicopter that crashed at the Kenosha Regional Airport last month.

Rescue personal tend to the occupant of an R-22 two-bladed, single-engine light utility helicopter that crashed at the Kenosha Regional Airport Sunday afternoon.