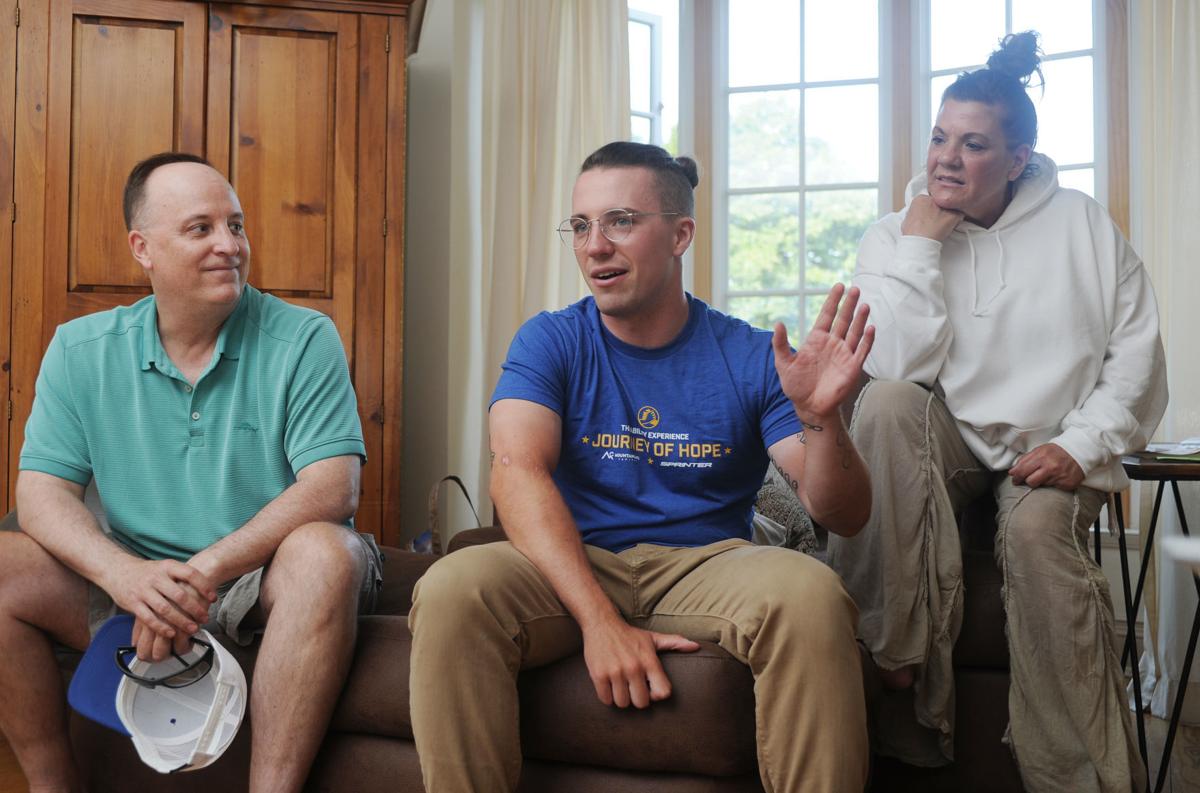 William Pechous, center, talks about his biking experiences as his parents, Charles and Kim, look on. 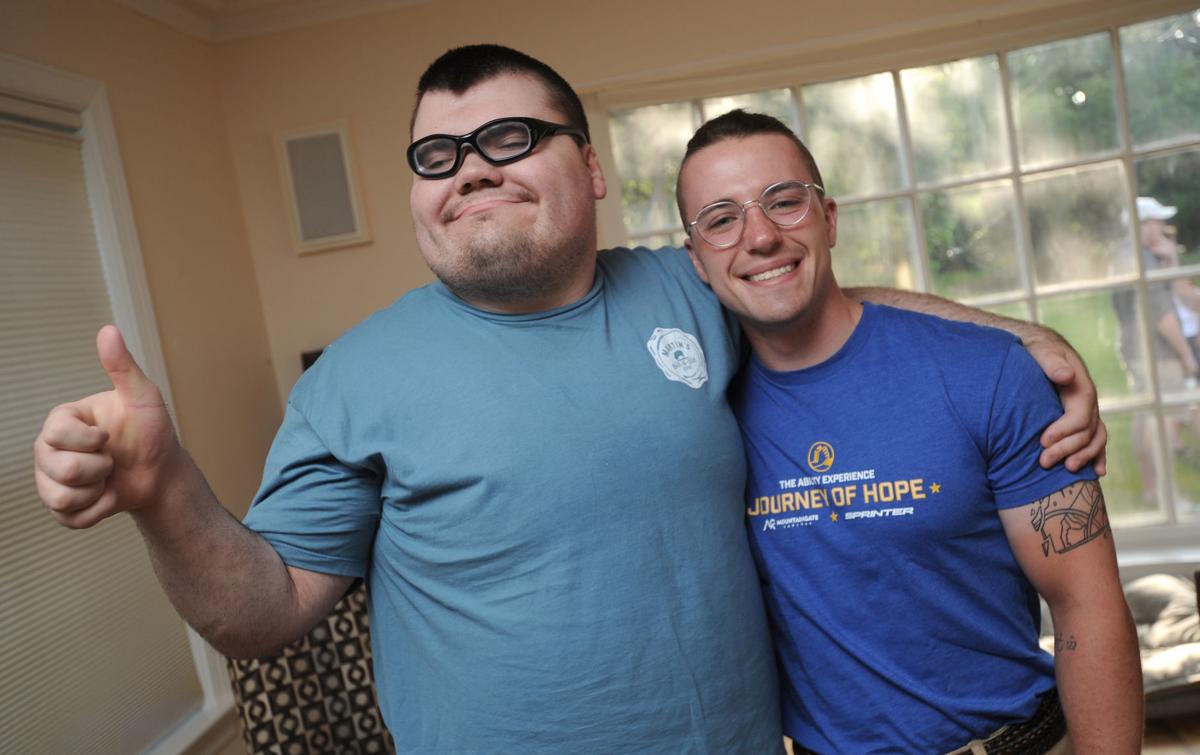 Will Pechous, right, poses with his brother, Sam. 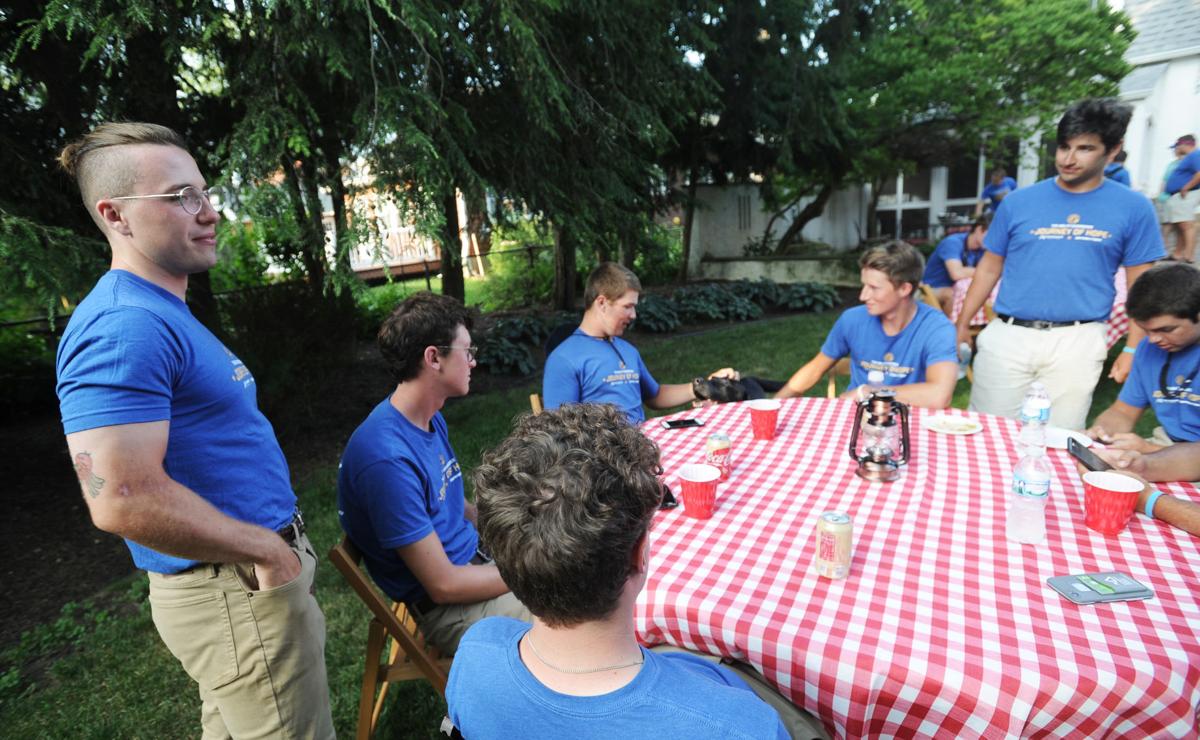 William Pechous, left, relaxes with his biking crew during a stop at his home in Kenosha. 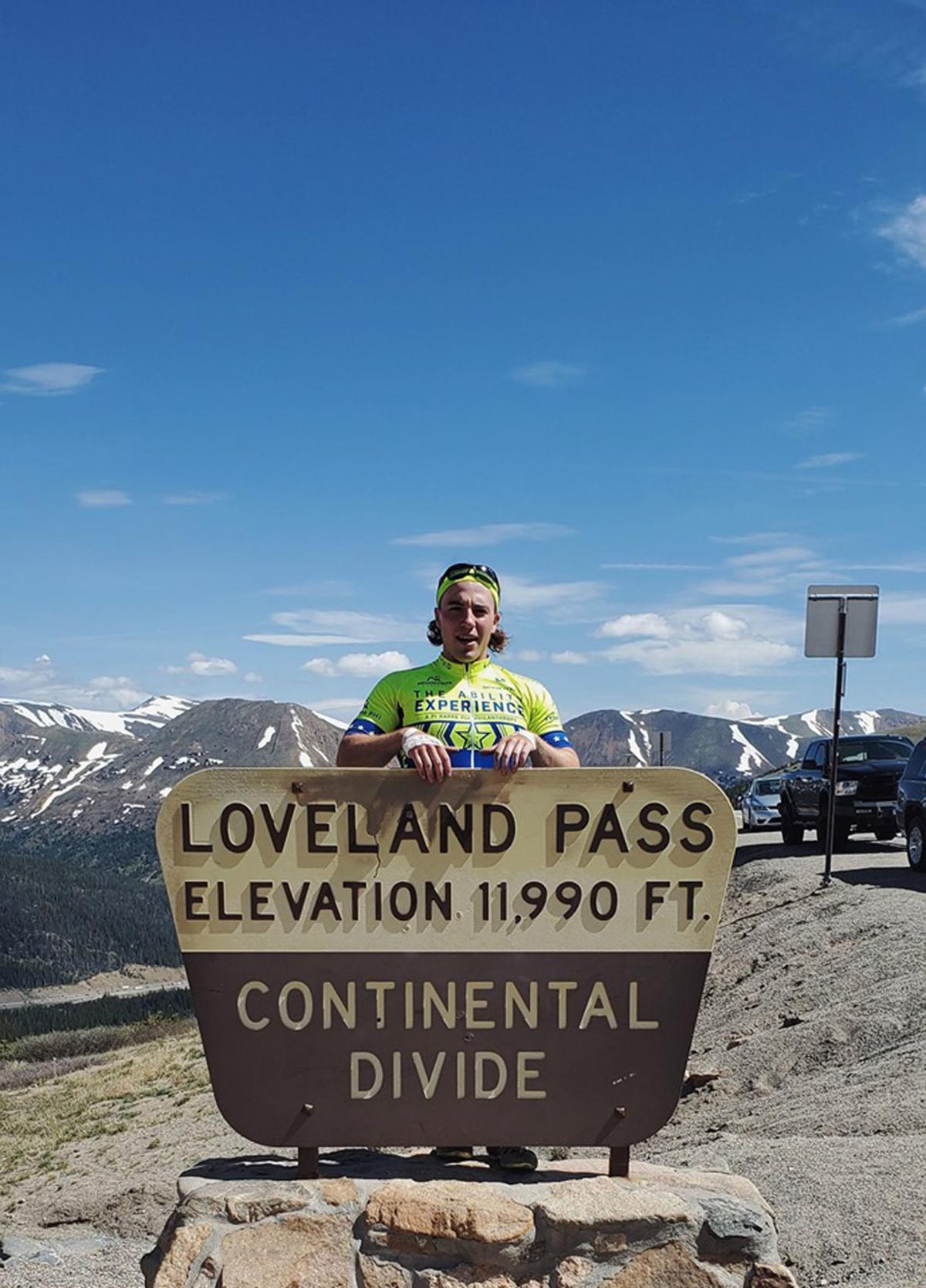 One of the highlights on Will Pechous' ride across America with the Journey of Hope was arriving at Loveland Pass, Colo. 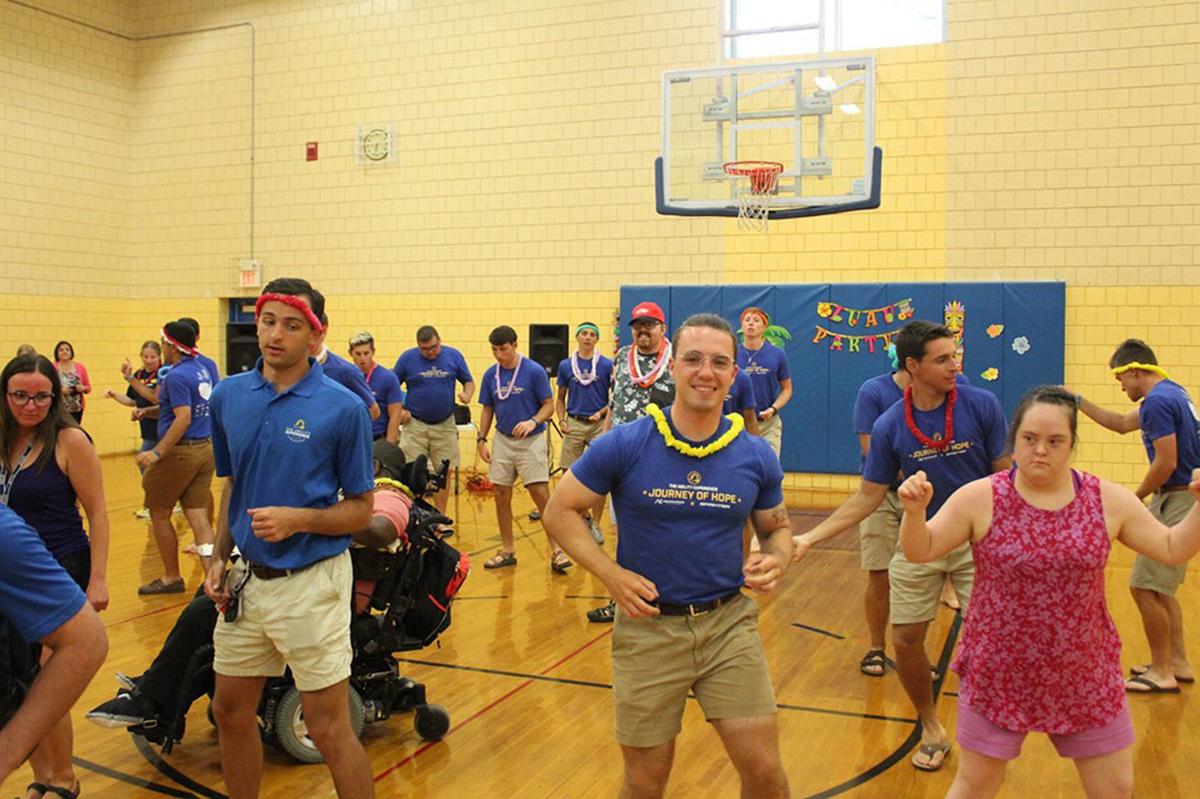 Will Pechous, center, busts a move, at a Hawaiin themed party during a Friendship Visit in Lincoln, Neb. on the Journey of Hope ride across the country. 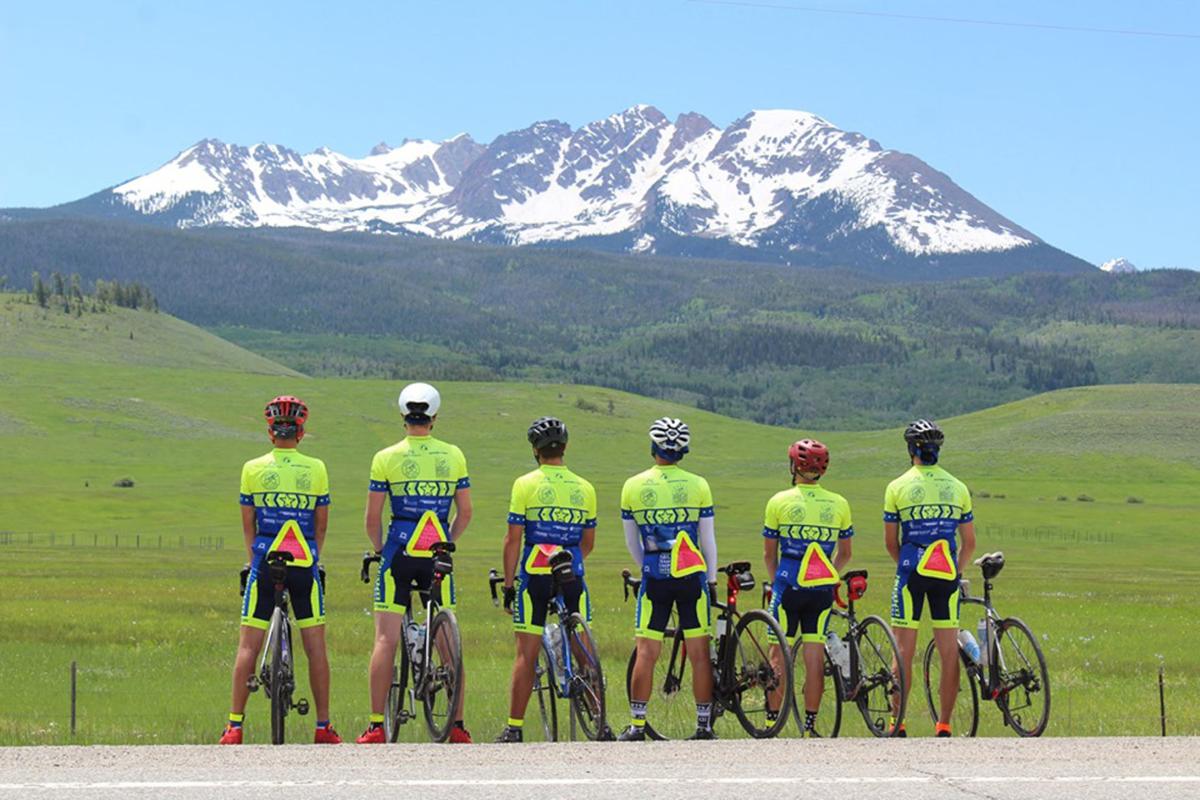 Will Pechous, third from the right, with teammates in Colorado during the Journey for Hope ride. 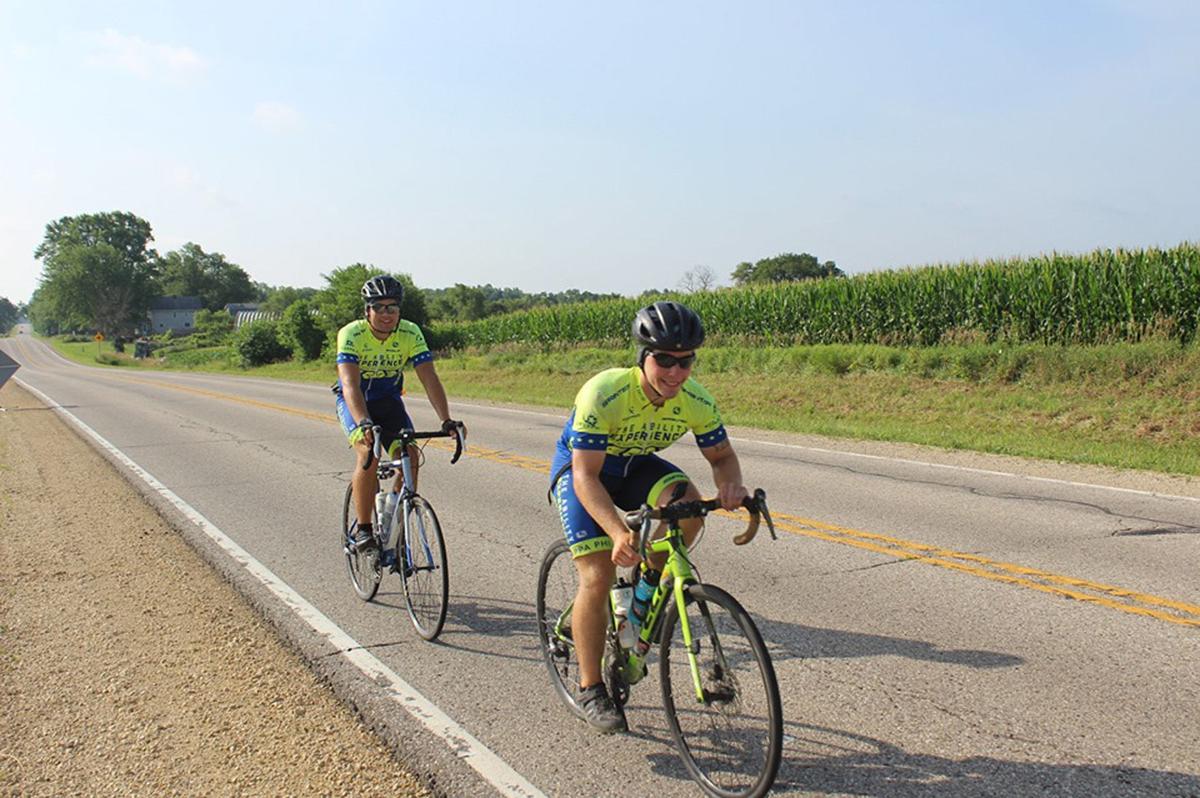 Will Pechous, in front, with fellow rider during the Journey of Hope fundraiser from San Francisco to Washington D.C. 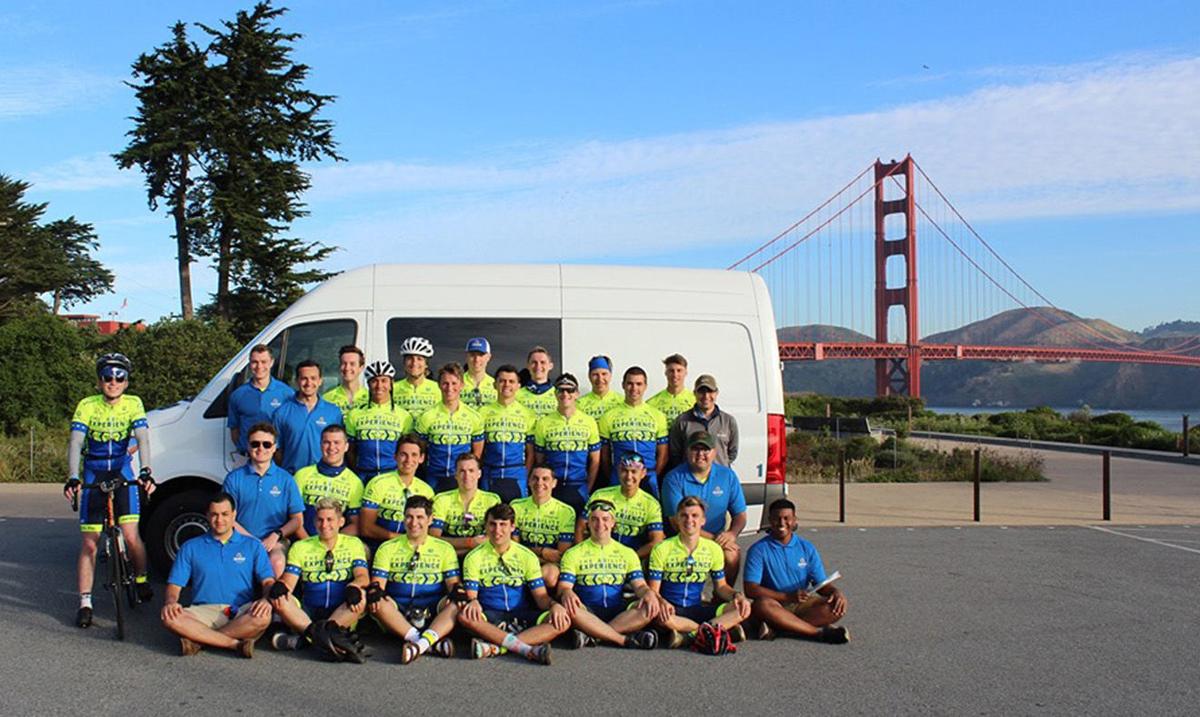 Will Pechous, front row, third from the right, and the Journey of Hope team just before setting out across America from San Francisco.

On Tuesday, William Pechous went to dinner at his parents' Kenosha home.

What would for most college students be a fairly routine family event was a unique homecoming: Pechous, 21, was dropping in on Day 45 of a bicycle ride across the United States.

With him were the 21 other bikers and a host of support personnel.

Pechous and his fellow cyclists are on a fundraising ride that started June 9 in San Francisco and ends Aug. 10 in Washington, D.C.

The ride is called the Journey of Hope, a fundraiser for the Ability Experience, an organization that helps support agencies nationwide working with those with disabilities.

Pechous and his team are on the North Route, and by the time they roll into D.C. they will have ridden nearly 4,000 miles across two mountain ranges and through 13 states.

One of the unique facets of the fundraiser is that it is a philanthropic arm of a national university fraternity, Pi Kappa Phi, organized in 1988. Since then, thousands of dollars have been raised to help those with special needs.

Will, a student at the University of Wisconsin, joined Pi Kappa Phi specifically to become part of this fundraising experience to support his fraternal twin brother, Sam, born with Smith-Magenis syndrome, a developmental disorder.

"My main reason for doing this is my twin brother Sam. Sam is a person with disabilities and has been and continues to be a driving force in my life for all that I do. He is my rock, my hero, and my best friend. Without him, I would not be here today."

The News first caught up with Pechous by phone on Day 35 when the team was resting for the afternoon in Des Moines, Iowa.

"It's been fantastic. This has been a life-changing experience," Pechous said.

He explained that for 63 days, the team rides between 30 and 125 miles, staying at high schools, YMCAs or churches that have been pre-arranged by trip organizers.

When the riders arrive at their daily destination, their next order of business are Friendship Visits with area special needs agencies. During the visits, the riders might go bowling or participate in picnics or dances with agency clients and staff.

Pechous says even after a long ride, the Friendship Visits are very special for all of the riders.

Not only do they like the interaction, but they're aware that the ride is raising money to support these agencies, Pechous said.

"The impact we make lasts a lifetime," he noted.

"There are rest days during the trip, but barely any days we can just hang out and take in a city."

The son of Charles and Kim Pechous, Will is a 2016 graduate of St. Joseph Catholic Academy. He is studying computer science at the University of Wisconsin, where he will be a senior in the fall.

"I joined the frat with the intention of helping start a chapter of Ability Experience. The Madison chapter is the first one in Wisconsin," he said.

In Wisconsin on Day 45, with 18 to go, the team had clocked 2,739 miles, a number Pechous rattled off the top of his head during his visit with his parents.

Interestingly, Pechous said he was riding on the same tires he had during his 900-mile ride through Florida.

"We repaired a few flats but kept the skins," he said.

Among Will's personal highlights for the trip so far has been the day the team climbed 12,000 feet to Loveland Pass, Colo.

"I felt on top of the world," he said. "I called my parents and girlfriend — it was all surreal. I thought, 'I’m actually doing this!' I still get misty-eyed thinking about it."

On Tuesday, the team rode from Menomonee Falls to Northbrook, Ill., for their overnight stay. From there they took the crew support vans to Kenosha for a barbecue picnic with Pechous' family.

"It's surreal to be home; it doesn't feel like I'm on the trip any more," Will Pechous said.

When asked by his father what his toughest day so far has been, Will replied, "The day we rode up to Lake Tahoe. It was Day 4 and we had ridden 90 miles, then had to go two miles straight up."

"What was the scariest day?" Charles asked.

"When I fell and slid on my head and shoulder while going into Craig, Colo.," Will said.

Although he was OK except for some scuffs and scratches, Will's bike was temporarily sidelined for repairs. It was soon fixed, and Will caught up with the team by riding in one of the support vans.

He doesn't regret the miles missed that day, saying, "You only haven't ridden a mile if you quit."

Asked if she was proud of Will's accomplishments, his mother Kim, said, "I'm proud of all my children, but what I love most about what Will is doing is his connection with his brother."

Said Will: "(Sam's) always been the reason I am who I am. I would be more self-centered without him. ... Plain and simple, I am doing this because I want to affect others like my brother has affected me."

The impact of the fundraising is top of mind for Will and his teammates.

"It goes to make the lives of those with disabilities better," he said.

He is also modest about riding a bicycle across the country to do so.

"It’s an ability for me to ride, and I have the ability to make a change in someone’s life," he said. "I have an obligation to live a life I can, because (Sam) can’t.

"You can do extraordinary things if you open yourself up to it. If you go out and search for it, you can be someone’s superhero by just riding a bike."

Will Pechous cites the following as just a few standout moments during his ride across America with the Ability Experience (as of Day 45):

Journey of Hope by the Numbers

$700 to 900K: Amount of money raised annually by Journey of Hope riders

13: States being crossed through by Will Pechous' team.

2: Mountain ranges ridden through (the Rockies and the Appalachian)

Donating to Journey of Hope

For more online information or how to donate to the Journey of Hope:

Here are some photos from the Mayor's Cup Race at the Washington Park Velodrome. The race took place the night of Tuesday, July 16.

The Ability Experience and Journey of Hope

The Journey of Hope Ability Experience fundraiser is unique not just because participants bike ride across America, but because it was founded…

William Pechous, center, talks about his biking experiences as his parents, Charles and Kim, look on.

Will Pechous, right, poses with his brother, Sam.

William Pechous, left, relaxes with his biking crew during a stop at his home in Kenosha.

One of the highlights on Will Pechous' ride across America with the Journey of Hope was arriving at Loveland Pass, Colo.

Will Pechous, center, busts a move, at a Hawaiin themed party during a Friendship Visit in Lincoln, Neb. on the Journey of Hope ride across the country.

Will Pechous, third from the right, with teammates in Colorado during the Journey for Hope ride.

Will Pechous, in front, with fellow rider during the Journey of Hope fundraiser from San Francisco to Washington D.C.

Will Pechous, front row, third from the right, and the Journey of Hope team just before setting out across America from San Francisco.