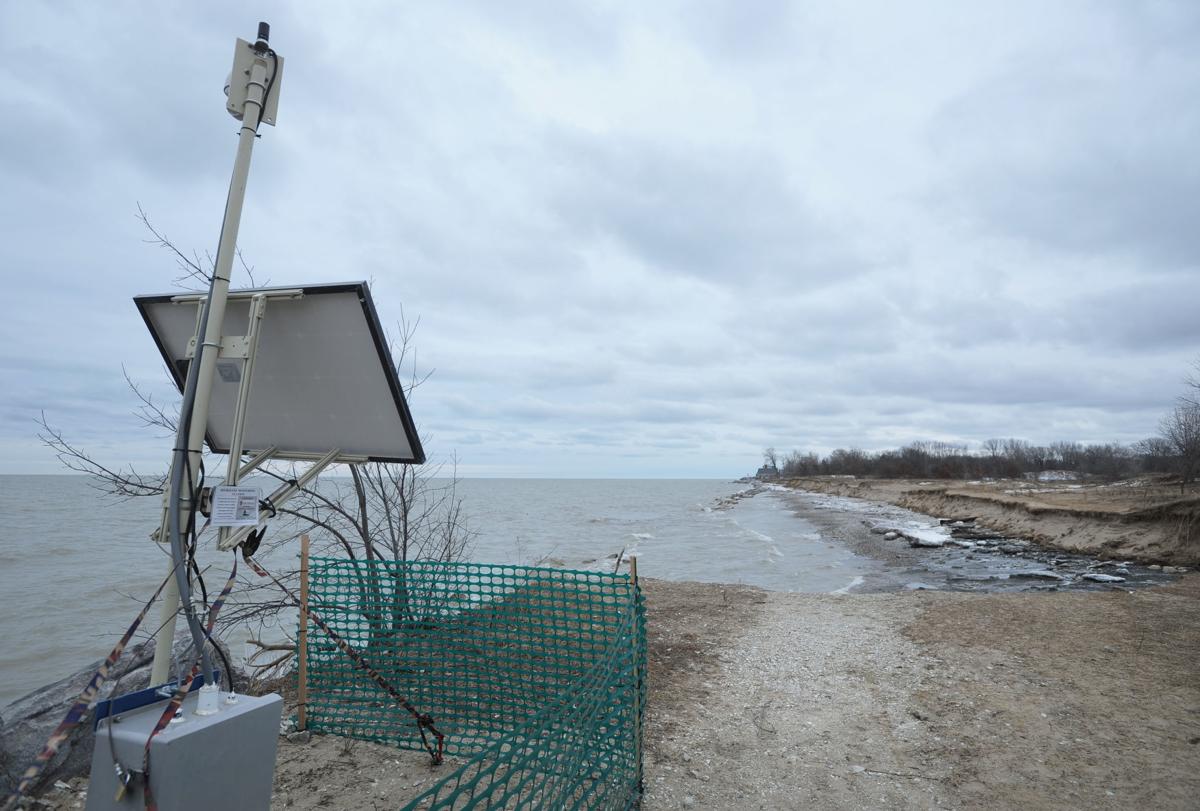 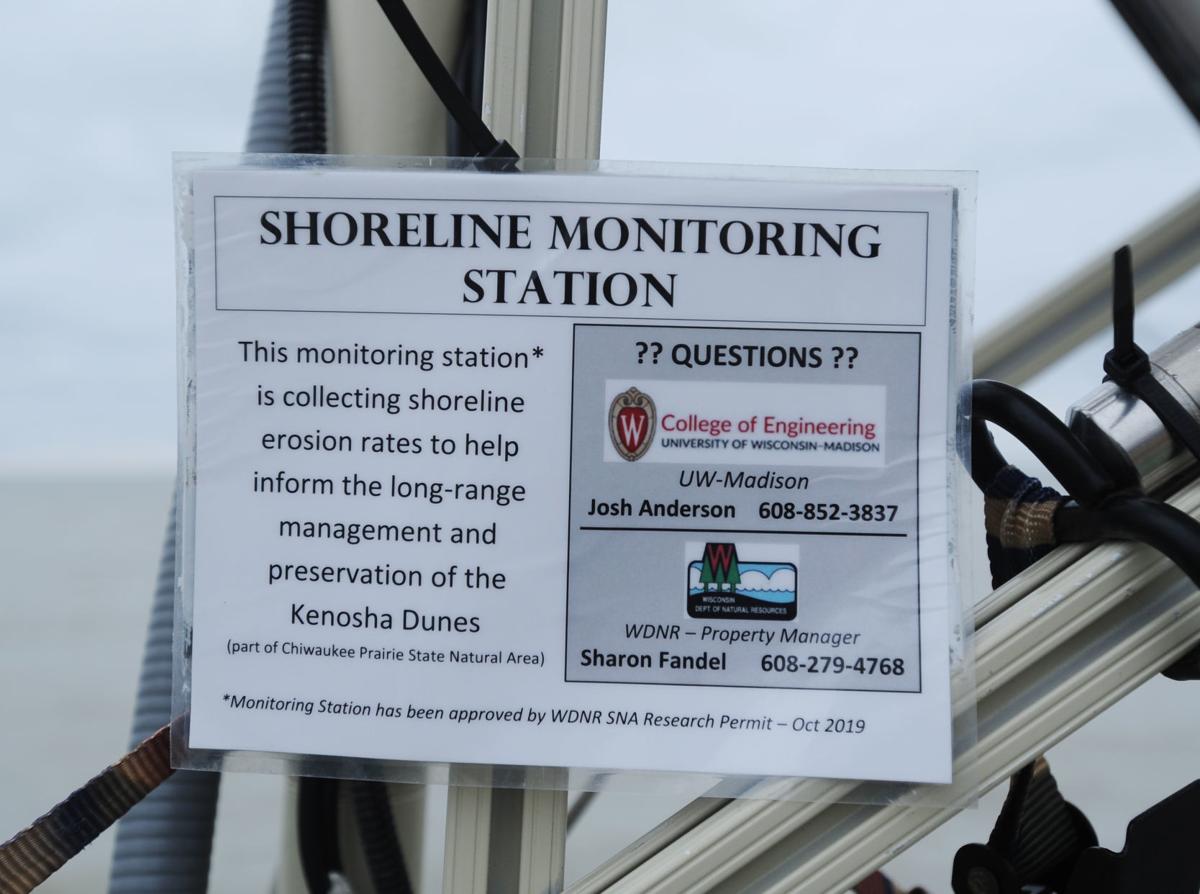 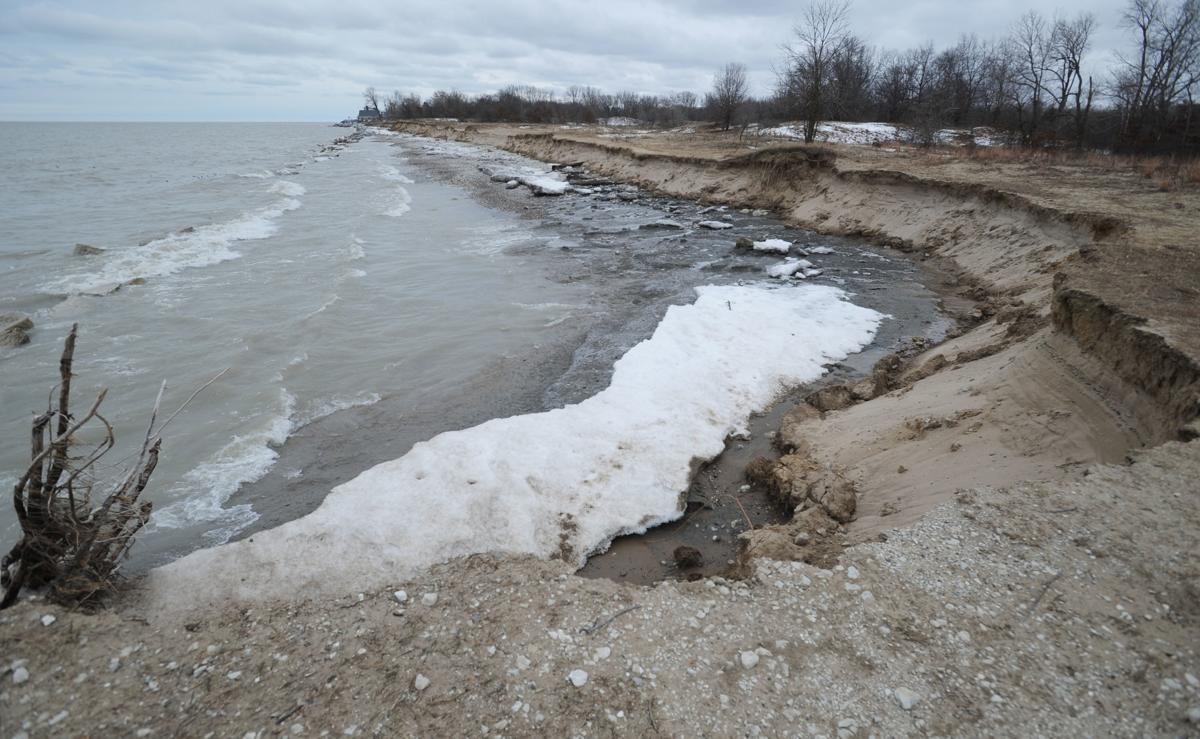 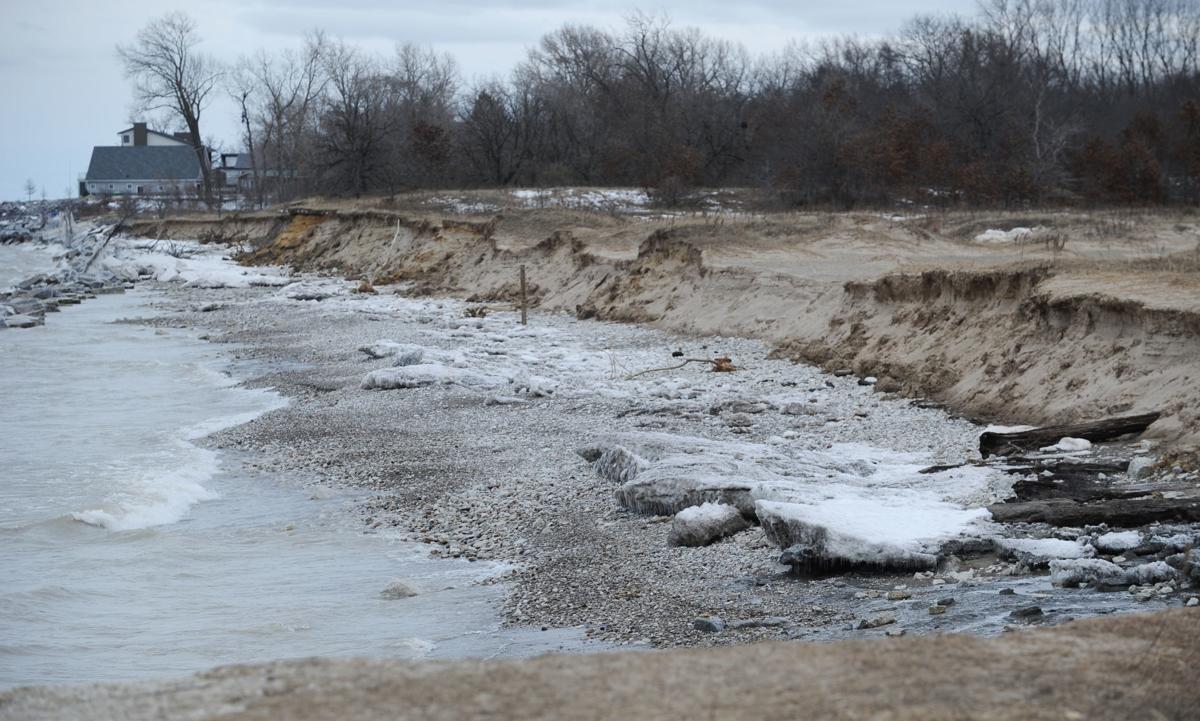 This graphic shows how the submerged sills would function when lake levels are low.

This graphic shows how the submerged sills would function when lake levels are high.

This photo shows the Kenosha Dunes in 2018.

This photos shows the Kenosha Dunes in 2012.

This map shows a system of submerged sills proposed to protect the Kenosha Dunes from future erosion and improve coastal and marine habitats. 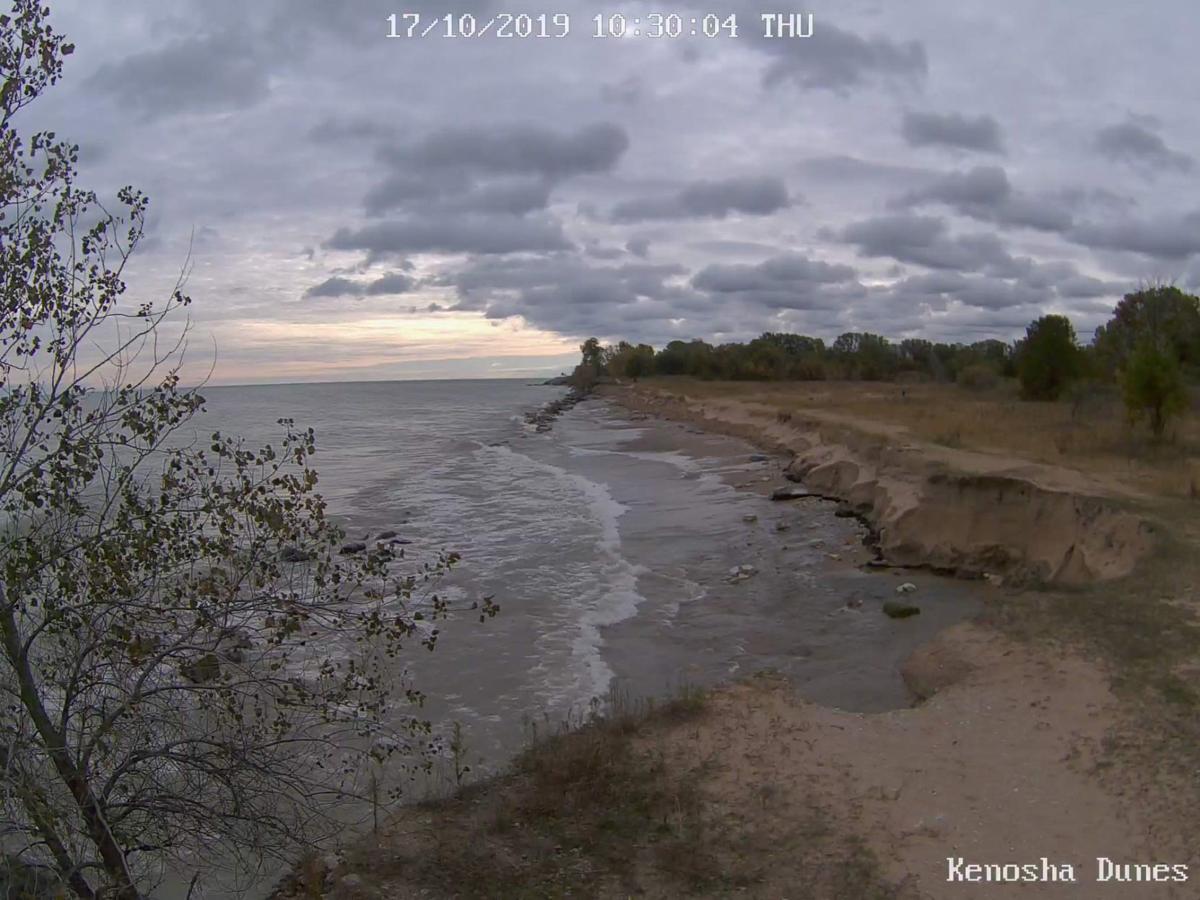 This photo of the Kenosha Dunes was taken Oct. 17. 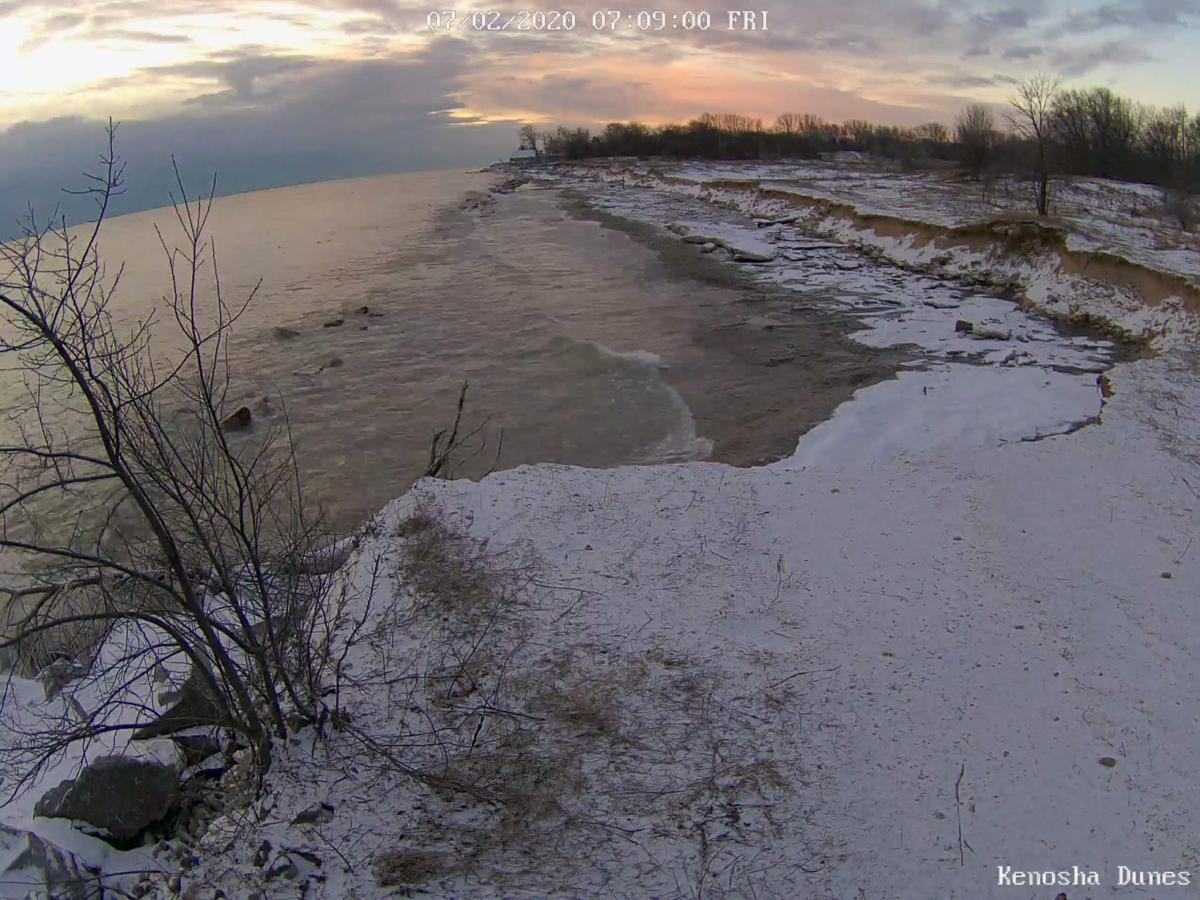 This photo of the Kenosha Dunes was taken Friday.

The Kenosha Dunes adjacent to the Chiwaukee Prairie State Natural Area are disappearing so quickly they will likely disappear within five years if nothing is done to address erosion, according to scientists who have been studying the site.

“It’s staggering, staggering,” said Jim Killian, a water resources management specialist with the Wisconsin Department of Natural Resources, of the speed of the erosion, which has been gone into overdrive with the rise of Lake Michigan water levels over the last five years.

“Assuming water levels stay high — and right now we don’t have any climate indications that the water levels will drop any time soon — I agree (with the estimate) that the dunes will be gone in four to five years.”

Just during the Jan. 11 winter storm that caused damage up and down the lakeshore, the dunes appear to have lost another 20 feet of shoreline.

Hoping to save the area, a number of organizations — including scientists at two universities, state and federal authorities and conservation groups — are working on a plan to build a unique artificial reef structure off the shore that could slow the impact of waves on the shore while still maintaining a natural shoreline that provides habitat for coastal wildlife.

“The challenges we’re facing are the same as everyone is facing around the Great Lakes — cost and time,” Killian said.

The Chiwaukee Prairie is a unique natural area with dunes, coastal wetlands and the largest prairie complexes in the state, and it is home to a host of rare plant and animal species, according to the Wisconsin Department of Natural Resources. It is also considered a critical rest stop for migrating birds.

Unlike active dunes elsewhere on the Great Lakes, where dunes build and retreat based on patterns of winds and waves, the Kenosha Dunes are a stabilized ecosystem left behind by the retreat of glaciers thousands of years ago.

“Our dunes here is a glacial till,” said Dr. Chin Wu. “Once it is eroded, it will not come back. ... Based on my estimation, there will be no Kenosha Dunes in five years if nothing is done.”

Wu has been studying the dunes since 2016, using technology that includes underwater cameras and sensors that measure wave action and a remote camera on the shore that measures retreat of the dunes, taking a photo every 10 minutes during the day.

Since the study began, the dunes have retreated by about 100 feet.

“The dunes are a mess,” said Pam Holy, president of the Chiwaukee Prairie Preservation Fund. The pathway along the bluffs is gone, collapsed into the lake. Even the station for the remote camera had to be moved in the fall after the ground near it began to collapse.

Wu warned that people walking in the area should stay well off the edge of the bluffs, saying the area has become unstable.

Up and down Lake Michigan, the most common way to address erosion has been to pile huge rocks on the shore in an armor of revetment.

While that can be effective, Wu said, it destroys the natural link between the water and the shore that fish, wildlife and plant species depend on.

The stone revetments along the shore also have the effect of concentrating wave power on those areas that are not armored.

At the dunes, there was a stone revetment that began to fail in about 2015. That stone is now visible in the water off what is now the shoreline.

Rather than a typical revetment, the engineering team working on the dunes project hopes to build a series of underwater sills or artificial reefs, using the failed revetment to build the first.

Wu and Killian said the aim of the design is to preserve the shoreline habitat and provide fish habitat while addressing erosion.

He acknowledged it is going to be difficult to get the funding in place in time to save the dunes.

The Natural Resources Foundation of Wisconsin is one of the partners working to try to make that happen. The agency, which works to help secure grants and public and private funds for conservation projects, first secured a grant in 2015 to do a coastal assessment of the region.

When the problem with the Kenosha Dunes was identified, it secured $375,000 in grants from the Fund for Lake Michigan and National Fish and Wildlife Foundation to pay for the engineering for the project.

Camille Zanoni of the Natural Resources Foundation said the organization has made the Chiwaukee Prairie a priority because of its “extraordinarily high biological significance and the fact that it’s public land.”

She said the group also hopes that lessons learned from the project can be applied elsewhere.

Zanoni said the organization will be working on securing grant funding to help cover construction costs.

Building the reef structure, which will still have to go through a permitting process including the Army Corps of Engineers, will be complicated, Killian said.

“You can’t just drive trucks across the dunes,” he said, and construction will have to be done from barges in the water. The cost of stone is also high.

Killian estimated the construction cost for the initial repairs to the failed revetment at $1 million, with $8 million to $10 million for the rest of the off-shore structures.

He said that securing the funds for the project will be difficult, but he’s hopeful they will have something in place in time to save the habitat.

“We are pushing like crazy to get something out there by August or September,” Killian said. “But the money has to line up.”

This graphic shows how the submerged sills would function when lake levels are low.

This graphic shows how the submerged sills would function when lake levels are high.

This photo shows the Kenosha Dunes in 2018.

This photos shows the Kenosha Dunes in 2012.

This map shows a system of submerged sills proposed to protect the Kenosha Dunes from future erosion and improve coastal and marine habitats.

This photo of the Kenosha Dunes was taken Oct. 17.

This photo of the Kenosha Dunes was taken Friday.