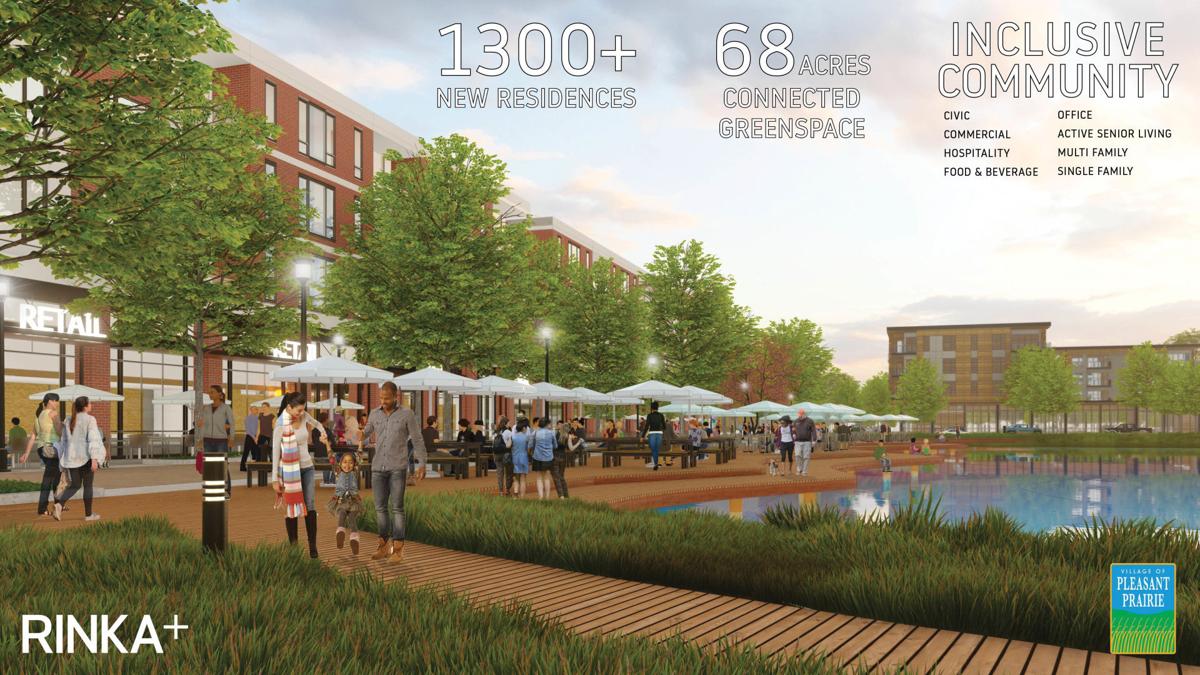 The southern end of the central green space in the Pleasant Prairie Village Green Center is depicted in this rendering. The public had its first view of the plan during an informational meeting held online Thursday night.

PLEASANT PRAIRIE — For the first time, the vision of the Village Green Center is starting to come into focus.

There’s plenty of work ahead to bring it all to fruition, but the opening reviews appear to be quite positive.

More than 130 people tuned in online Thursday night for a public informational meeting hosted by the village and Rinka, a Milwaukee-based architectural firm tasked with creating the vision for the Village Green Center.

The project area covers about 188 acres, including 96 owned by the village, and is centered at the intersection of Highway 165 and 39th Avenue. According to a previous press release issued by the village, about 121 acres of that total are undeveloped, 42 are developed and the remaining 25 represent part of the right-of-way.

Pleasant Prairie purchased 72 of its 96 acres from Mount Pleasant Land and Lakes Development Company for $3.7 million in October 2018.

Village Administrator Nathan Thiel said Pleasant Prairie is “all in” on the project.

“The village is very committed to this project and wants to see it move forward.”

The meeting was more than a year in the making, after conceptual planning was put together with the help of more than 60 community members. The Village Board last October approved a motion to award the $257,500 contract to Rinka, which was one of two firms considered.

“Obviously, the community in Pleasant Prairie here has had wonderful involvement along the way, putting together the concepts and ideas for what you have wanted to see as a community,” Rinka’s Steve Morales said.

Specific to the Village Green Center, the plan identifies a pedestrian street from east to west, an Art Plex to the north and potentially a library and a senior living community to the south.

In the center, a possibility is a pavilion, with an ampitheater to the north and natural landscape to the south.

“The idea here is to really anchor the space with a variety of uses that’s really going to promote (activity) at various times of the day by various groups of users of all ages at all walks of life,” he said.

Morales showed a plan that starts with the Village Green Center, and as developments get further away, it becomes less dense with more neighborhoods. Closer to the site is proposed mixed use (combination of commercial and residential spaces), potential civic use areas, various commercial uses, and eventually more single- and multi-family homes.

The northern half of the Village Green is seen as more “highly programmable,” Morales said, with possible activities as a community movie night on the lawn, small gatherings and possibly concerns.

On the southern half is more of a natural landscape, he said, including a large stormwater pond, Morales said.

Other potential uses could be colder month activities like an ice rink under a potential, family areas and a pedestrian mall, which Morales said could have a dual use.

“It’s a cross between a pedestrian mall and a street,” he said. “If you can imagine the experience, it would be something where vehicles could use the streets during high-traffic times. When there was time to have (activity) there, the street could be converted to a pedestrian mall.”

The plan also calls for a pedestrian street, which is a focus, Morales said, in an effort to keep traffic to a minimum and allow for ease foot access to the center and the businesses in and around it.

“You keep the vehicles away from that area to really allow and promote that pedestrian connectivity,” Morales said. “That allows for you to arrive at the sites or be a neighbor who walks to it, and essentially peruse through the site and stop at many different establishments.”

Natural trails through existing wetlands and woodlands are included in the plan, along with dedicated green roadways.

Morales said 37% of the site, about 68 acres, will remain as green space.

“That accounts for a lot of the green way connections in between neighborhoods, in pockets of neighborhoods, the Village Green itself, the woodlands and wetlands around it, as well as a lot of the courtyard-type planning that’s happening,” he said. “It’s a very well-connected, green-connected type of development.”

Every road in the plan is set up for pedestrian and bicycle traffic in one way or another, Morales said. A pedestrian bridge also is possible that could cross over 39th Avenue, along with a potential transportation hub.

Morales said work already has begun with potential developers who have expressed interest in the project.

Everything that was presented Thursday will serve as a guide to those companies.

“The architecture ultimately will be based on what the developer proposes,” Morales said. “What is important to note is the municipality tasked us with, and we have some experience doing this, was putting together the guidelines for that development. ... Developers will not be able to come in and propose off-the-wall type of development that your community hasn’t already said it’s looking for.”

Density will be the driving force behind the types of developers who may be interested in the project, both Morales and Thiel said.

Thiel said it’s estimated the residential portion will draw about 1,300 “doors” to the center, which translates to about 3,000 people.

“I believe the village is well positioned for the development of this space given that we own the land,” he said. “... Right now, we’re aiming to have this be something the developers are capable are making a return on investment without a ton of public investment.

“All those things will need to be considered as we work with them. A lot will depend partially on how much public amenities we want to incorporate.”

Upgrades to some of the village infrastructure will be necessary as well, Thiel said.

Thiel said a Tax Increment District could be a potential route for the village. In that scenario, the government uses the taxes generated from the development for some of the public infrastructure improvements.

From Rinka’s perspective, there have been some preliminary discussions with potential developers, Morales said.

“They’re looking for density and activity on site,” he said. “This kind of planning sets them up for that. ... Density is really what drives a lot of the potential interest here. ... Developers that we’ve spoken to are very excited for this kind of opportunity.”

Morales, in response to a question from a resident, said the target is for potential commercial space to account for about 35,000-50,000 total square feet, which includes food and beverage, local retail and destinational/recreational retail as well.

Thiel said there are several other milestones ahead before the project will reach the finish line.

The virtual open house Thursday was the first step, Thiel said. Rinka is working with developers its worked with in the past along with potential new developers.

From the village side, a planned development will be completed to come up with the design standards and guidelines, hopefully by the end of the year. Thiel said the plan is to be moving forward in some fashion with developments next spring.

“Clearly, there’s going to be a phased approach,” Thiel said. “It’s not all going to happen overnight.”

Here are recent stories focusing on development in the village of Pleasant Prairie in Kenosha County that have been published online and in the Kenosha News.

Plans in motion for former power plant in Pleasant Prairie

PLEASANT PRAIRIE — The future of the Pleasant Prairie Power Plant that closed in 2018 remains uncertain today.

The village of Pleasant Prairie and the steering committee have partnered with RINKA architects, planners and designers to craft a professiona…

Our view: Votes of confidence for our region stand out during pandemic

Three years from now, May 2020 will likely be remembered for the end of stay-at-home orders in Wisconsin and most other states, the reopening …

The village of Pleasant Prairie dealt with a collection system sanitary sewer overflow on Sunday, May 17.

The lifting of Gov. Tony Evers safer-at-home orders by the Wisconsin State Supreme Court last week put into motion the beginning of communitie…

Plans for a single-family development in the village of Pleasant Prairie that were sidetracked by the recession in 2008 appear to be nearing reality.

PLEASANT PRAIRIE — A construction project is in the works on Bain Station Road in the village of Pleasant Prairie.

PLEASANT PRAIRIE — Most seemed to agree Monday night that a plan to solve storm water issues in the Chateau Eau Plaines Subdivision is needed.

Uline providing 36,000 products daily, owners want America to get back to work

Uline Corp., one of Kenosha County’s largest employers with more than 2,800 employees, is committed to continuing to work through the COVID-19…

PLEASANT PRAIRIE — A shared-use path has been proposed for Highway C in Pleasant Prairie.

Board authorizes closing documents for sale of $9 million, 68-acre property to developer

PLEASANT PRAIRIE — The Village Board has hired an attorney to provide general legal services for the municipality’s day-to-day operations.

PLEASANT PRAIRIE — Two proposed subdivisions in the village are headed to the finish line.

Local manufacturer teams with business alliance on masks at a discount

A Kenosha educator is mourning the loss of her husband who died Jan. 3 from COVID-19 which she said she was exposed to at school and inadverte…

A Kenosha Police officer was killed over the weekend in a snowmobile accident in Iron County in far northeast Wisconsin.

After a nationwide search for a new chief executive, the Boys & Girls Club of Kenosha found the person they were looking for right at home.

The southern end of the central green space in the Pleasant Prairie Village Green Center is depicted in this rendering. The public had its first view of the plan during an informational meeting held online Thursday night.