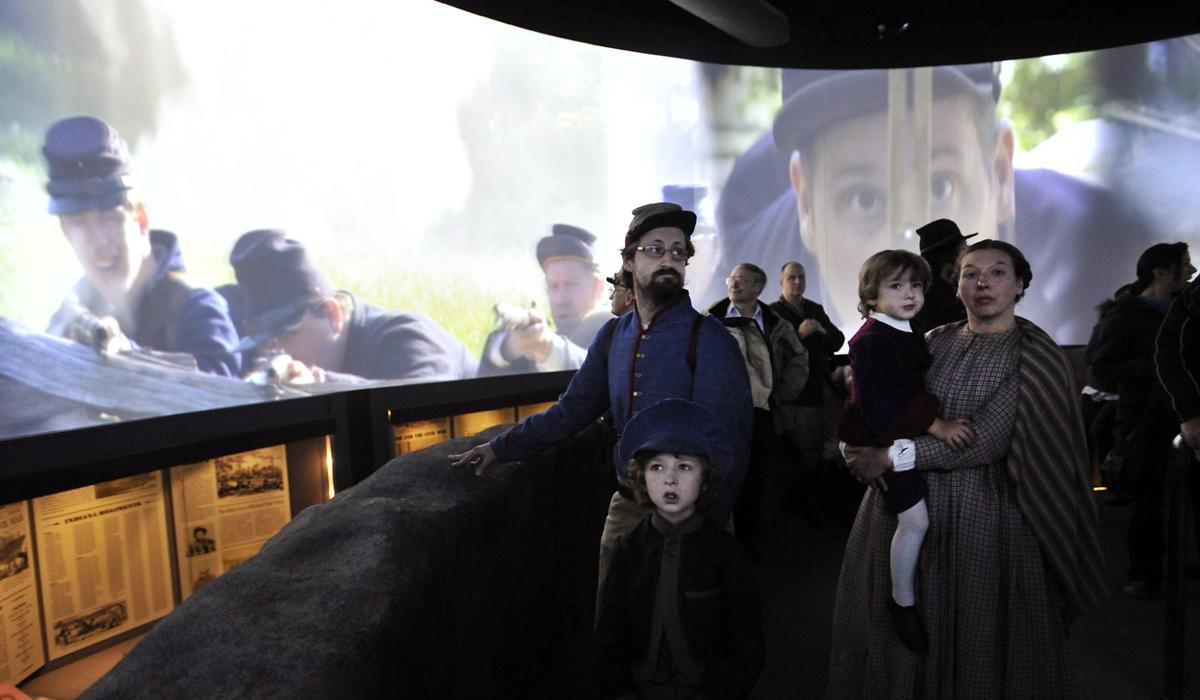 Re-enactors Jason and Stephanie Reinholz watch the Civil War film “Seeing the Elephant” at the Kenosha Civil War Museum. The film will be free on Saturday. 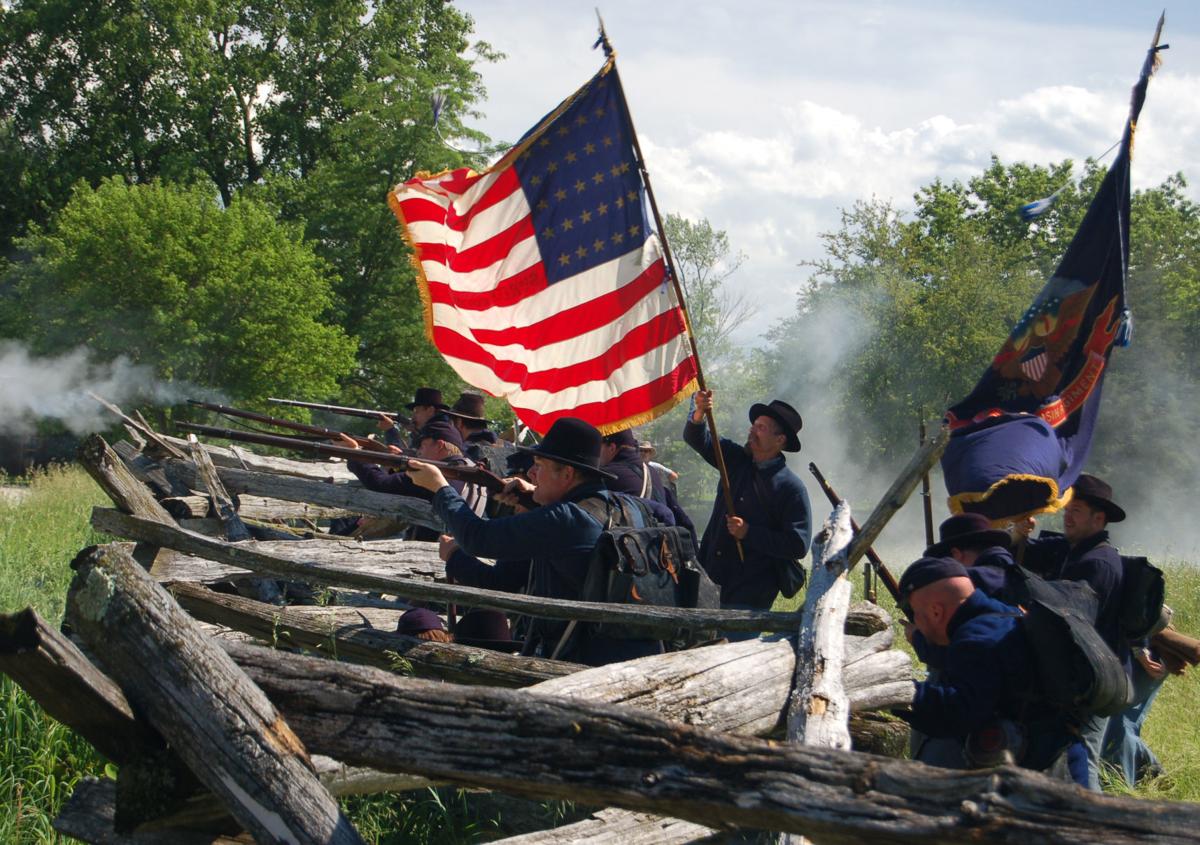 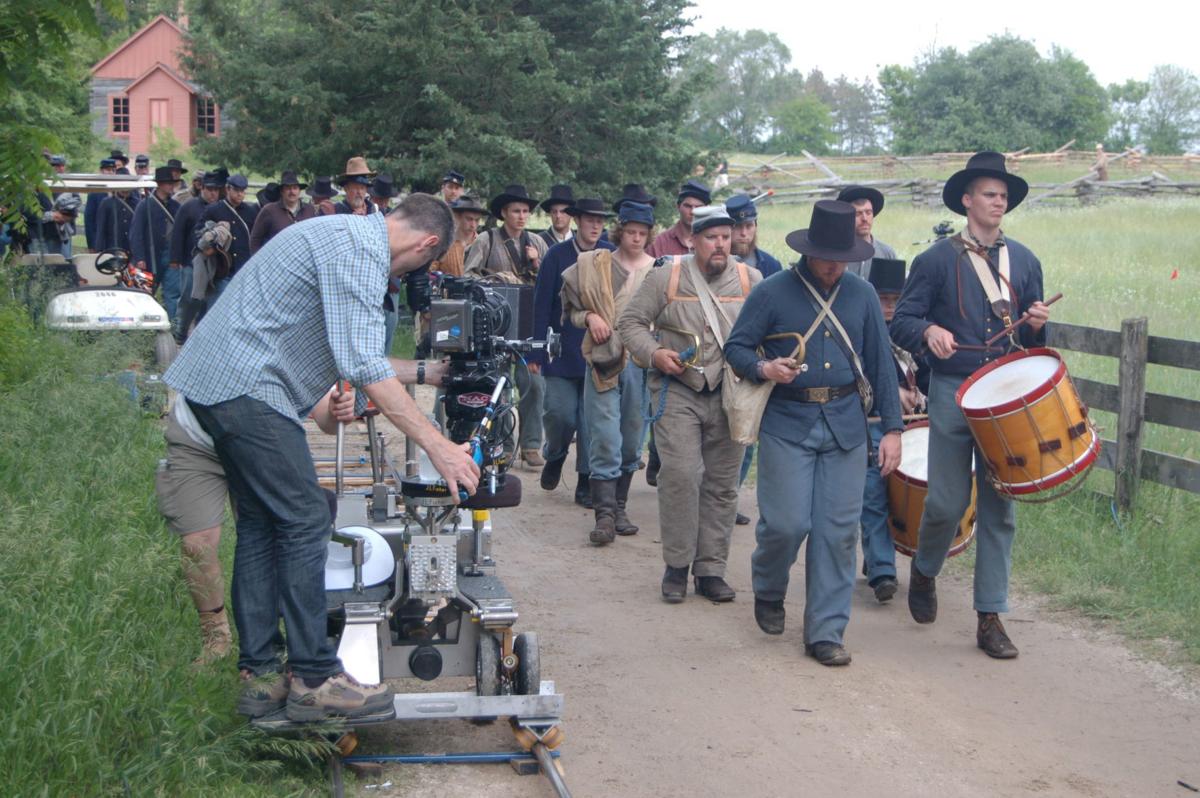 Filming of "Seeing the Elephant" 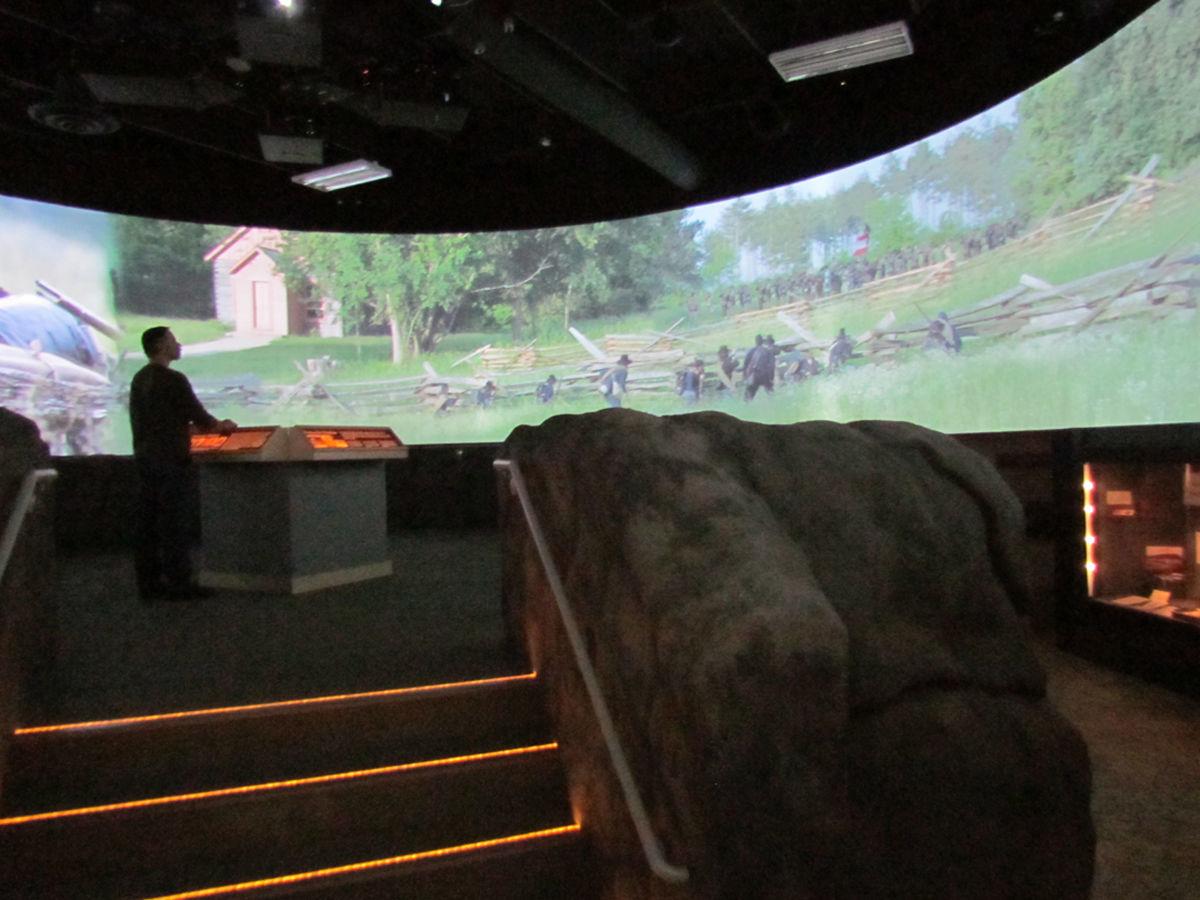 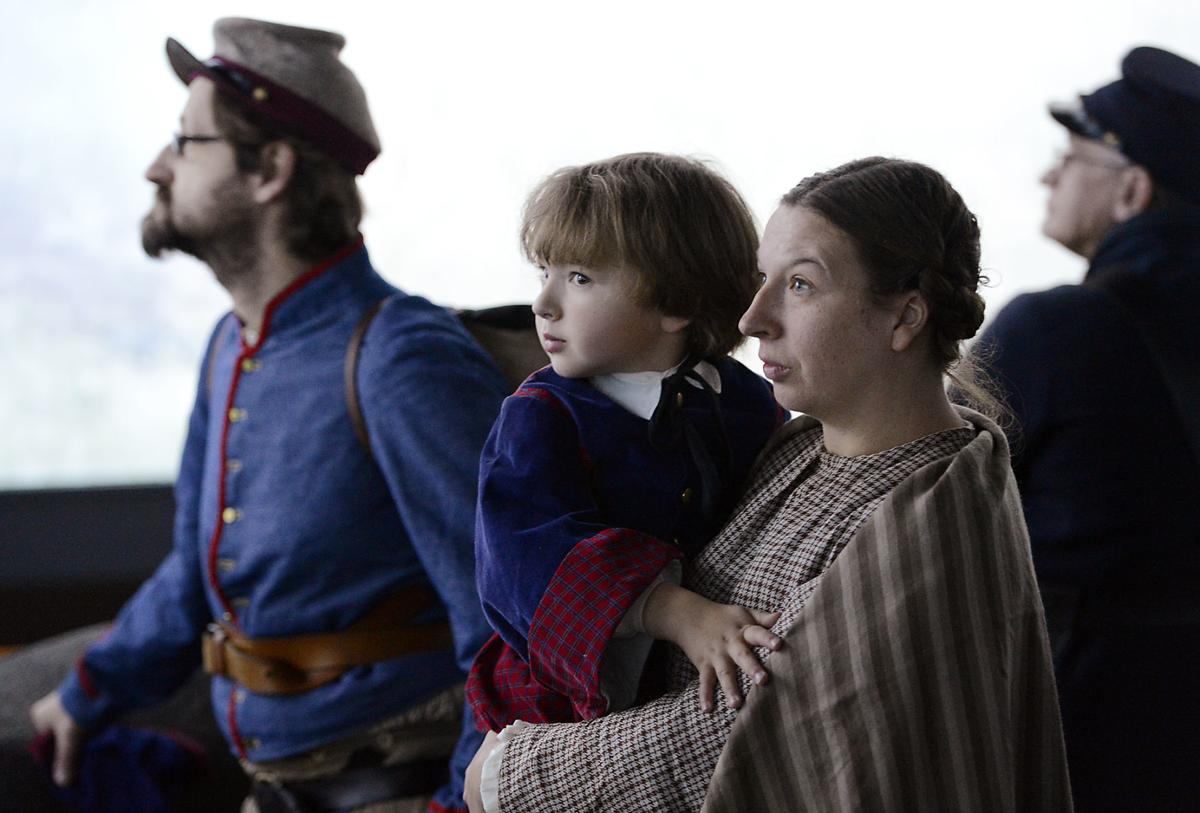 Re-enactors Jason and Stephanie Reinholz watch with their son Wyatt, 4. Debut of the short panoramic film,"Seeing the Elephant" at the Kenosha Civil War Museum Saturday.

The ground rumbles. You can almost smell the gunpowder. The troops surround you.

The 360-degree movie “Seeing the Elephant” at the Kenosha Civil War Museum is so realistic that it offers visitors the chance to almost experience the war for themselves.

The title is drawn from the Civil War-era description for something unknown that had to be seen to be believed.

“We wanted to put people in the middle of the experience to gain empathy,” said Dan Joyce, Kenosha Public Museums director and movie producer. “It’s all encompassing. We had combat veterans say it’s the best (Civil War film) they’ve ever seen and the closest to reality.”

The 10-minute film, which was filmed over five days at Old World Wisconsin and released in January 2014, offers a unique “in the round” experience via a modern digital take on the late 1800s-era cyclorama, a circular painted screen.

It is one of only three 360-degree films in the country, which includes one at Epcot Center in Florida and one at the Kentucky Derby museum.

What makes it a novel experience is instead of the images being above the viewer as in the vintage models, the museum’s version is projected with special equipment and appears around the viewer.

“It’s participatory,” said Doug Dammann, museum educational coordinator. “You have to look and move ahead. It encompasses what the museum is really about. It ties everything together.”

The film features some 200 re-enactors, six major actors, an explosives technician, and, at its height, a crew of 30 during the filming.

At a cost of $1.1 million, the film was made using nine cameras that point up into mirrors, operated by a crew crouching under their nearly 4-foot-height to avoid being in the shots. The film, produced by Boston Productions, required editing of more than 200 images viewed on multiple screens before they were seen together.

The film is shown via eight projectors using special equipment and a computer program that luckily came down in price as technology evolved since the project was first bid in 2007. It would have been unaffordable when they first started talking about the filming when the museum opened 10 years ago, said Joyce.

The film has gotten rave reviews from many of the museum’s 76,000 visitors a year. Based on real life soldiers’ letters housed on site and via other research, the film focuses on the differing viewpoints of an Irish immigrant, a high-ranking official and an abolitionist.

It’s narrated by Bill Kurtis, a Civil War buff who was honored to do the 3½ minutes of narration at no charge.

Joyce said the best part was giving Kurtis a special engraved replica Civil War sword as a thank you at the grand opening.

“He was thrilled,” Joyce said. “He hung it in his office, which is wonderful for us, too.”

Watching it, viewers find it hard not to be touched, as were Jen and Lou Derango of LaSalle, Ill., who were on their first visit to Kenosha.

“It’s wonderful. It brings tears to your eyes,” said Jen.

Seeing visitors take the stories of people from more than 150 years ago to heart is what coordinators hoped the film would accomplish. The Civil War, as evidenced by the conflicting views on statues and Confederate flags, is something that still strongly affects the nation today.

“We wanted to tell stories that were interesting, stories of people of the time,” said Joyce. “This impacted the nation tremendously. ... Twenty, 30, 50 men were killed in one little town.

“The film shows the first glimpse of the combat experience and what these guys went through. We see them as human beings, people who had a life. They’re just like us. The only difference is it’s 150 years ago.”

The film was recognized by the American Association for State and Local History and featured in the book, “Interpreting American Military History at Museums and Historic Sites.”

The film’s success has inspired discussions of the museum possibly developing a new production showing African American experiences in Wisconsin and the Midwest.

“There were two pre-war African American communities in Wisconsin of free blacks,” said Joyce. “There are a lot of stories people don’t know about. When you read a notice about an escaped slave in the Kenosha newspaper, things like that really bring it home.”

Inside the Civil War Museum

It starts — and ends — with a statue.

Re-enactors Jason and Stephanie Reinholz watch the Civil War film “Seeing the Elephant” at the Kenosha Civil War Museum. The film will be free on Saturday.

Filming of "Seeing the Elephant"

Re-enactors Jason and Stephanie Reinholz watch with their son Wyatt, 4. Debut of the short panoramic film,"Seeing the Elephant" at the Kenosha Civil War Museum Saturday.