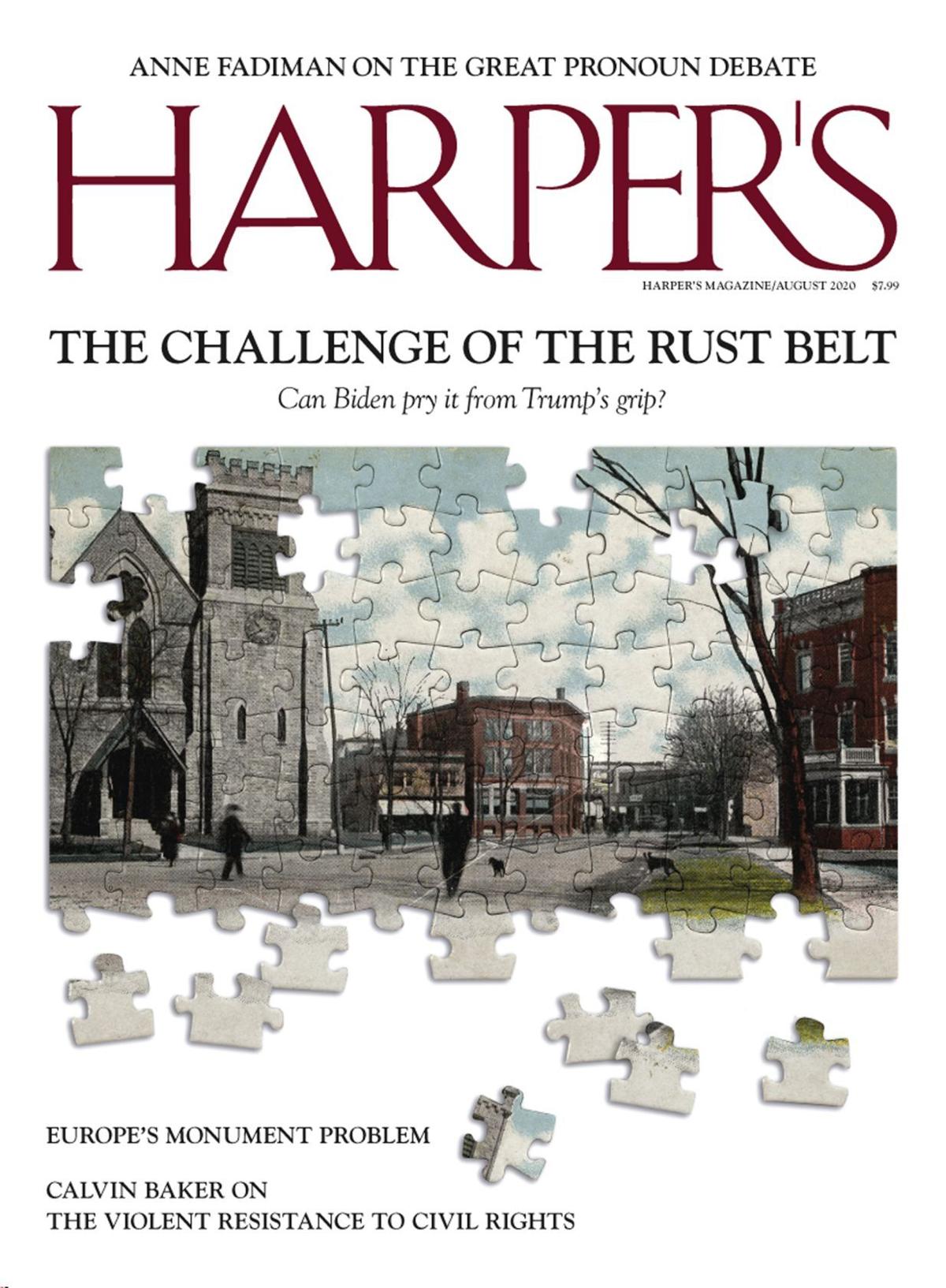 The cover story of Harper’s Magazine’s August issue focuses on Kenosha. The magazine is available at the RK News Hallmark Store on 75th Street. 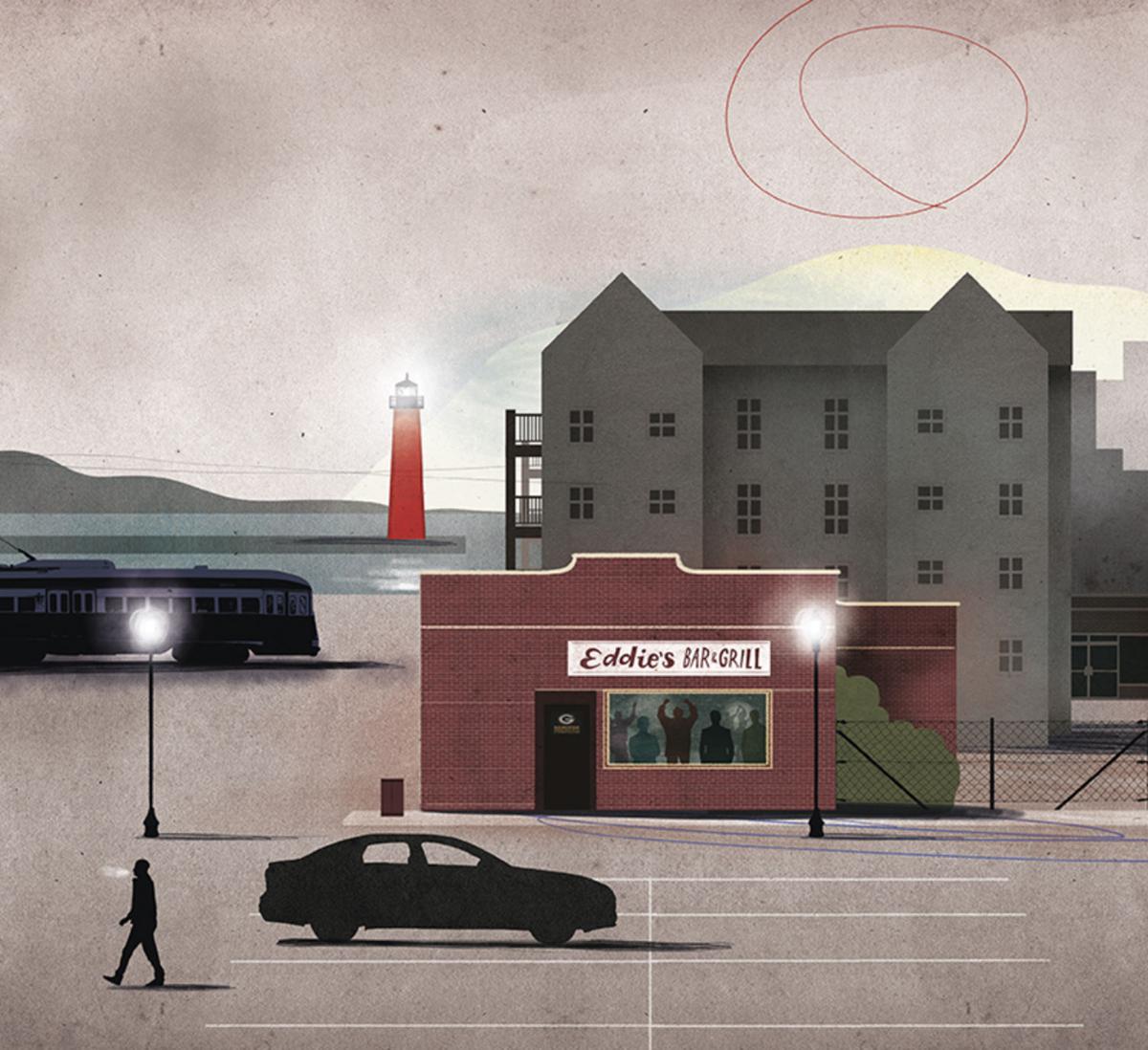 An illustration of Kenosha from the August issue of Harper’s Magazine (note the streetcar, lighthouse and Packers fans in the bar’s window) 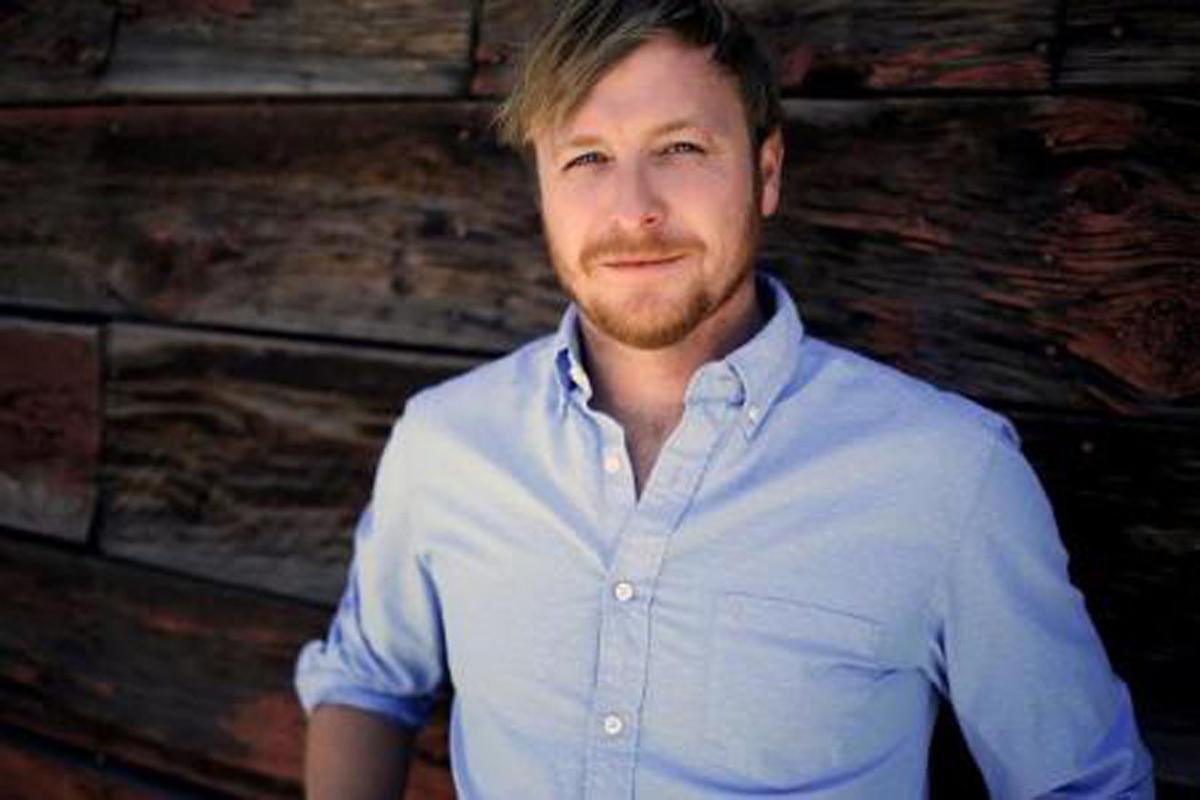 James Pogue stayed in Kenosha for six weeks earlier this year to research his cover story for the August issue of Harper’s Magazine. 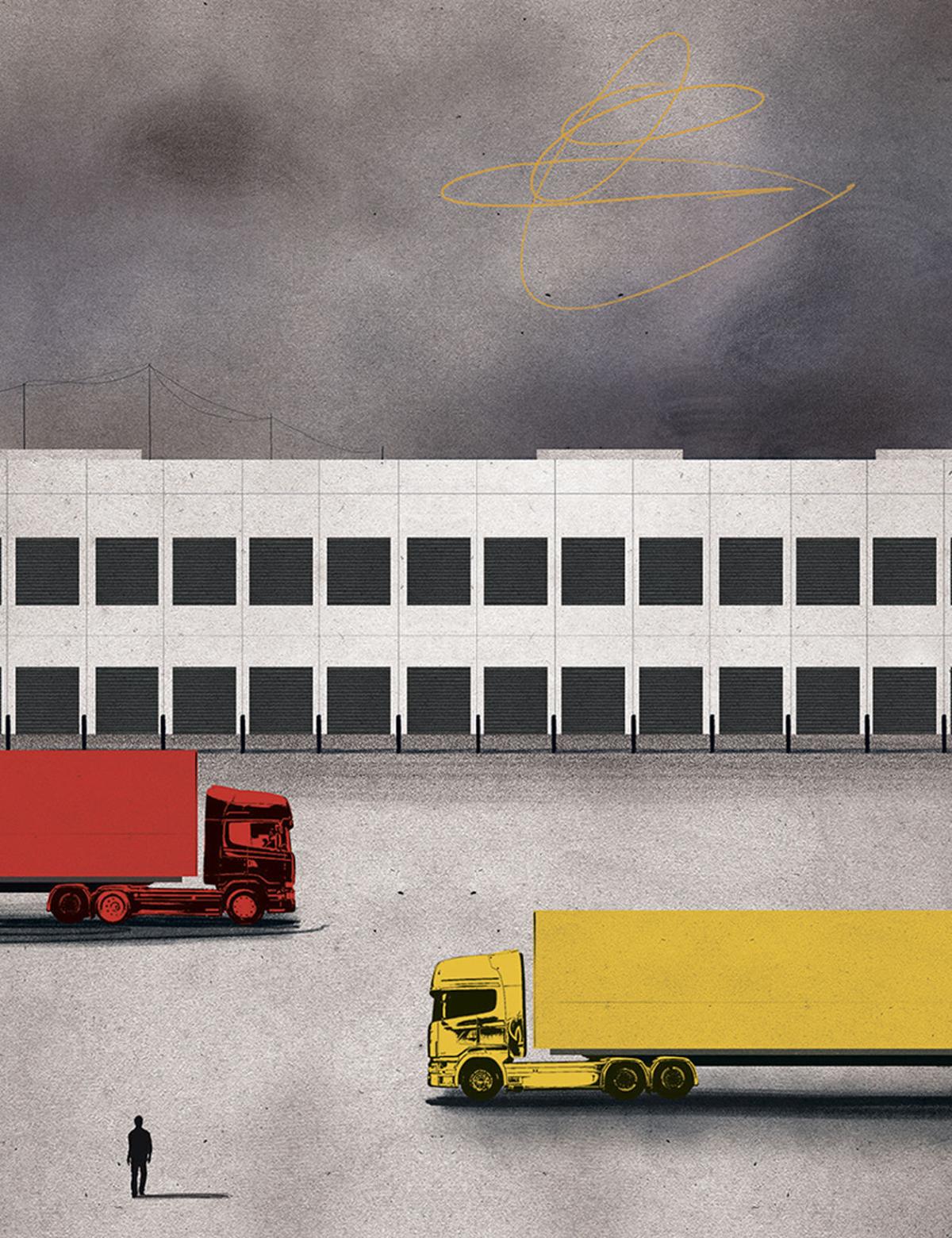 James Pogue had never even heard of Kenosha before he visited our fair city.

And he was coming here for a work assignment.

That explains why he set up temporary residency in February. That’s the worst month in Kenosha, by far, which is why it’s the shortest month.

Pogue — a Los Angeles-based writer — rented a home here for six weeks to get to know the community for a story in Harper’s magazine.

When we spoke on the phone Thursday, I immediately challenged his description of Kenosha as “a gray, exurban strip of Lake Michigan frontage with barely a hundred thousand residents.”

If he came now, I told him, he’d be delighted by how lush and green everything is, and how blue Lake Michigan gets in the summer sun. Also, how are we an “exurban” area? That implies we are a suburb of Chicago or Milwaukee instead of our own, unique Kenosha self.

“In fairness, I did say in the article that you could tell how pleasant it would be in the summer,” he replied, laughing and sharing his excitement over his first cover piece for Harper’s.

Pogue came to Kenosha to examine the political landscape in one of those famous “swing” districts. As he notes in his article: “In 2016, after having supported Democrats in almost every election for almost every office for 44 straight years, Kenosha County broke for Donald Trump. This was by a margin of only 238 votes.”

Once he got here, however, and shook off the February cold, Pogue discovered a community not torn apart by politics.

“Kenosha is interesting as one of the few places that I, as a political reporter, visited where it feels less divided than truly undecided,” he said. “Kenosha felt like a rare example, a throwback to an American politics that was really capable of engaging with the other side and trying to figure out the best options. It felt like a neat example of a place that is still politically open.”

Pogue spent six weeks here in an effort “to get to know people and get an elongated sense of them.”

When he’s working on an article, he said, “I try to spend an extended amount of time in that place, to make personal connections.”

That approach, he said, helps him avoid the trap of lazy first impressions.

“It’s really, really easy to get a mistaken impression of a place, especially in this time of our politics,” he said. “People have preconceived notions of what places are. A journalist friend of mine heard I was going to Idaho, and she said, ‘you’re going up there with the white supremacists’?”

Pogue himself is a native of Hamilton County in southern Ohio, which he calls “a fellow swing state. It’s also a place where people come to look at what happened in the 2016 election. I’ve seen how Ohio has been portrayed as a political entity, and those visions can get overblown.”

After getting to know folks in Kenosha, Pogue’s attitude started to change.

“The truth is, I had expected people to be more angry about the direction of the country or angry about economic forces, things like that,” he said. “Instead, I found people have a sense that politics has simply stopped working. They’re not angry but have just given up on the whole process.

“One of the great lessons of going to Kenosha — and it’s a scary thing — is that while a lot of people really care about making the world a better place, others think that’s not possible at all.”

This was probably not by design — he had never heard of Kenosha — but Pogue managed, in just six weeks, to touch on some areas of my own life.

One of the folks he talked with is Kenosha native Mark Pocan, the 2nd District congressman in Madison. Like me, Pocan is a northside Kenosha kid who graduated from Bradford High School. He’s also a talented magician and, during high school, I was his assistant in the Bradford Talent Show. How’s that for a personal connection?

Pogue also attended the monthly Labor Breakfast, which was one of my first assignments for the Kenosha News way, way back when I was a part-time reporter while attending Carthage College. It’s great to see this local institution — hosted by the late Norm Buchholz for about 50 years — is still thriving.

At that breakfast, Pogue spoke with Mayor John Antaramian, who he describes as a “richly mustachioed figure.”

Pogue said he felt a touch of that special Kenosha feeling of being in a chummy small town of some 100,000 residents.

“I’ve lived in Little Rock and Santa Fe,” he said, “and Kenosha felt much smaller to me. It has a lot to do with the civic participation and the unions and other things that help people connect.”

Those connections, he said, give Pogue some hope for our society in general.

He’s worried that his generation (he’s 33 years old) “has lost our sense of community, and I don’t know if society can survive that. But in Kenosha, people do know their neighbors and do want to do things to improve their community.”

Pogue ends the article by saying of the presidential election: “Democrats picked a candidate who has promised to return the country to normal. That may end up being the most dangerous choice of all.”

“A lot of people have really lost faith in the way the country is going in the last 30 years,” he added. “The idea of returning to normalcy — an imagined normal time before things got crazy — isn’t realistic. We need a new vision to replace what we’ve lost, and politicians need to be responsible for finding that new vision.

“There has to be something more than just getting rid of Trump. This is a real moment of national discord and questioning, and if that new vision doesn’t come, Trump being gone is very small potatoes.”

Speaking of potatoes and other food groups, Pogue did come away from his sojourn in Kenosha with two things: 1) a desire to return in better weather and go fishing (one of his passions) and 2) a greater appreciation for the popularity of breakfast cereals. (From his trivia win at the Swedish-American Club.)

Grew up: In southern Ohio and is now based in Los Angeles.

What he does: He is a journalist and essayist who has written for Harper’s, The New Yorker, The New York Times Magazine, the New Republic, and Vice, among many other publications.

Accolades: He was called a “brilliant young Southern writer” by the Oxford American.

Book it: He's working on a novel, which he plans to finish by the end of 2020. His first book is "Chosen Country: A Rebellion in the West," about the Cliven Bundy family saga, beginning in the immediate aftermath of the 2014 stand-off at the family’s Bunkerville, Nev., ranch and ending with a final 2016 interview with Ammon Bundy in the Portland jail where he was awaiting trial.

What's next: Pogue, who helps run a native plant nursery in Los Angeles, is heading east to earn a forestry degree at Yale University. He plans to write a history of how America developed as a country, told through it's agriculture.

The cover story of Harper’s Magazine’s August issue focuses on Kenosha. The magazine is available at the RK News Hallmark Store on 75th Street.

An illustration of Kenosha from the August issue of Harper’s Magazine (note the streetcar, lighthouse and Packers fans in the bar’s window)

James Pogue stayed in Kenosha for six weeks earlier this year to research his cover story for the August issue of Harper’s Magazine.