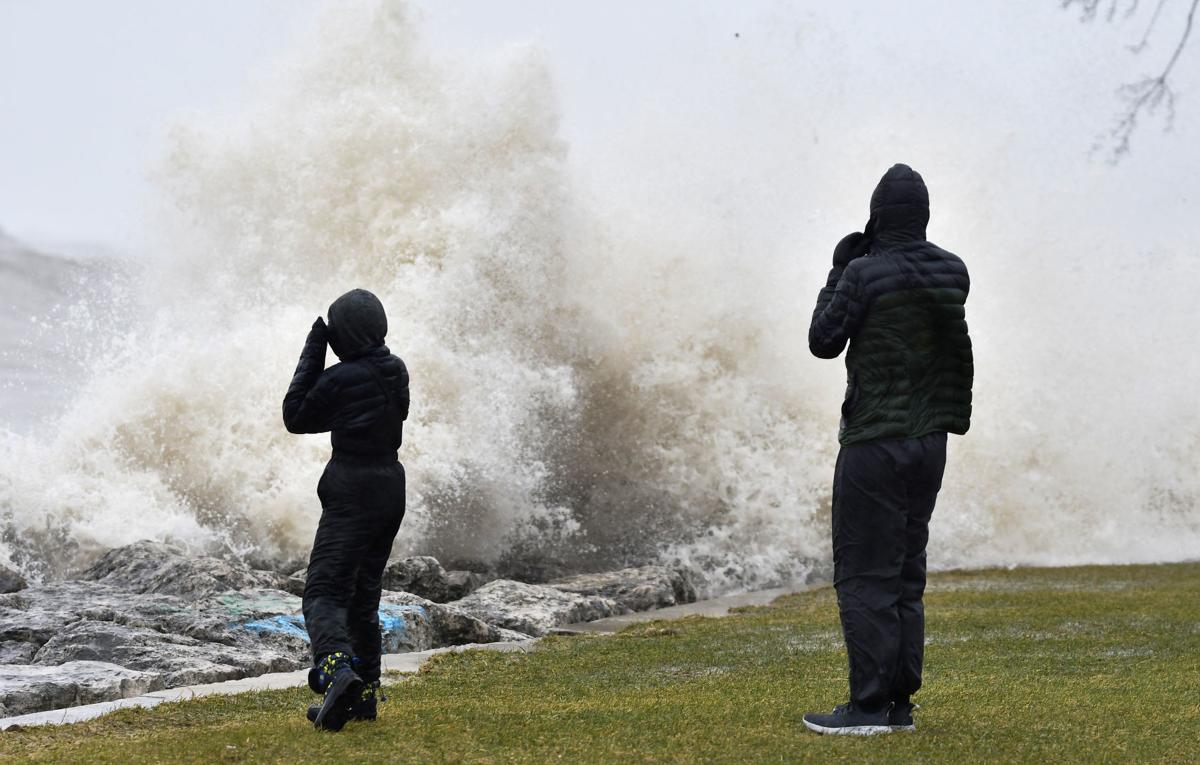 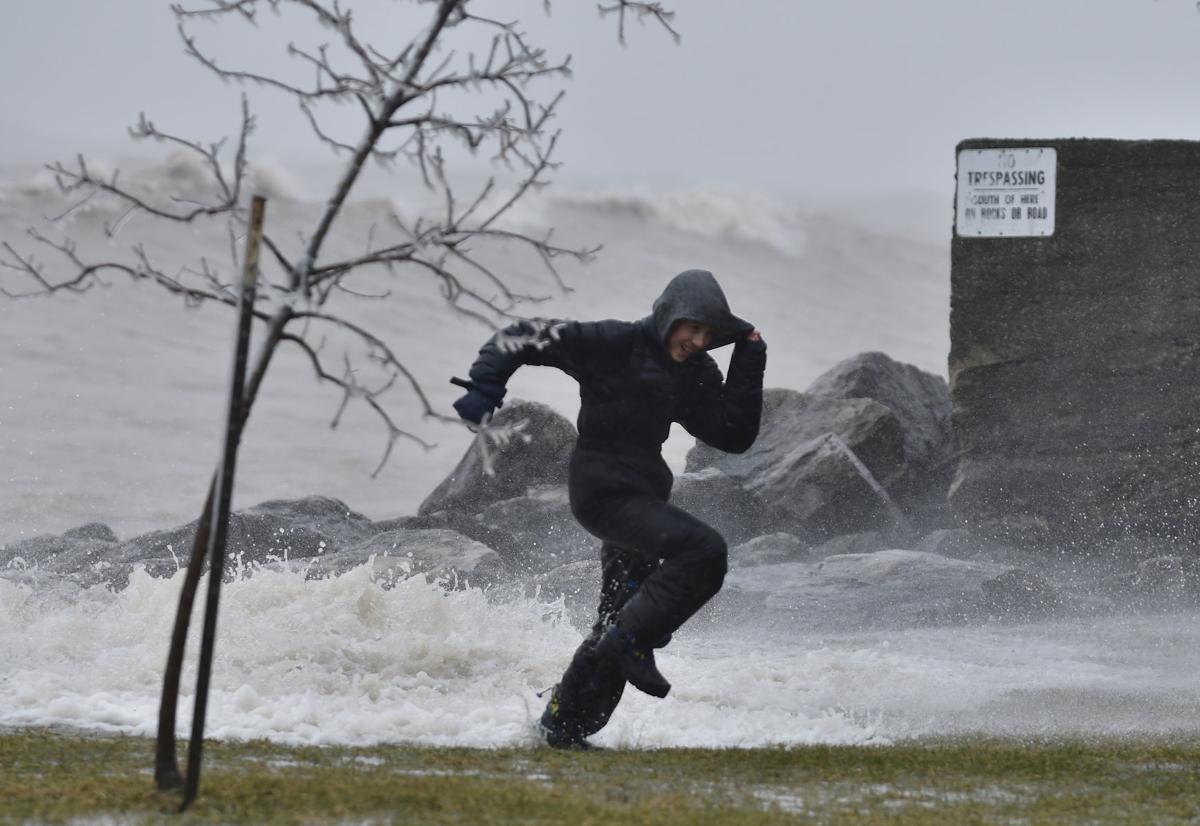 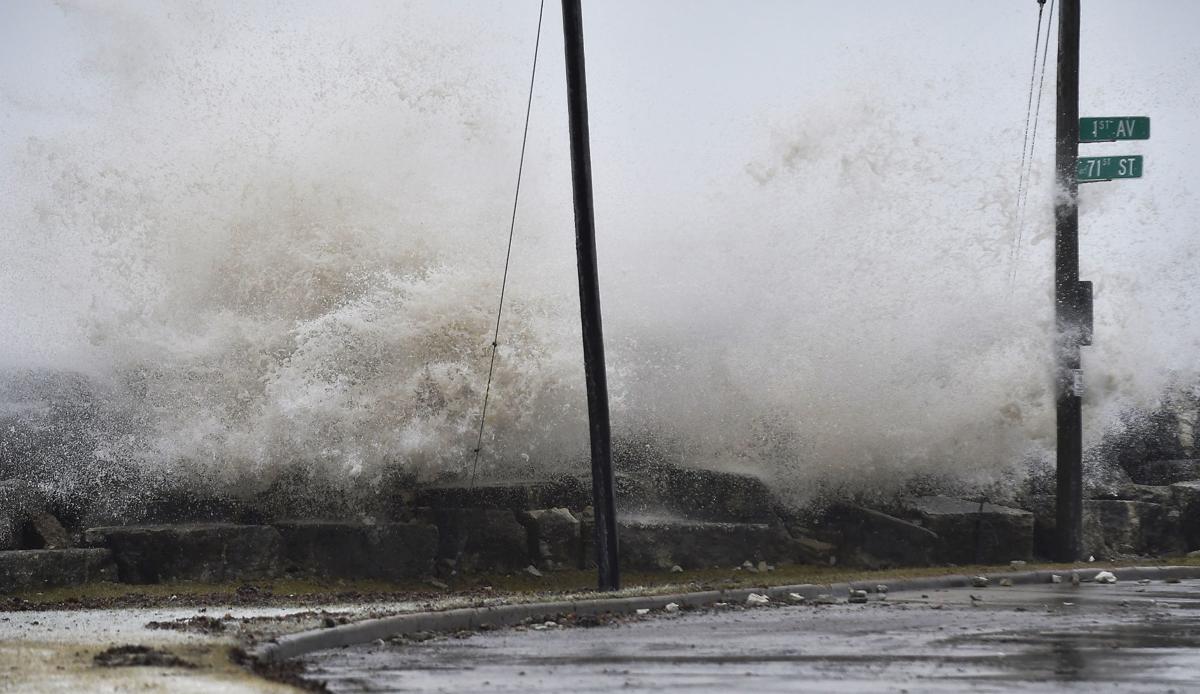 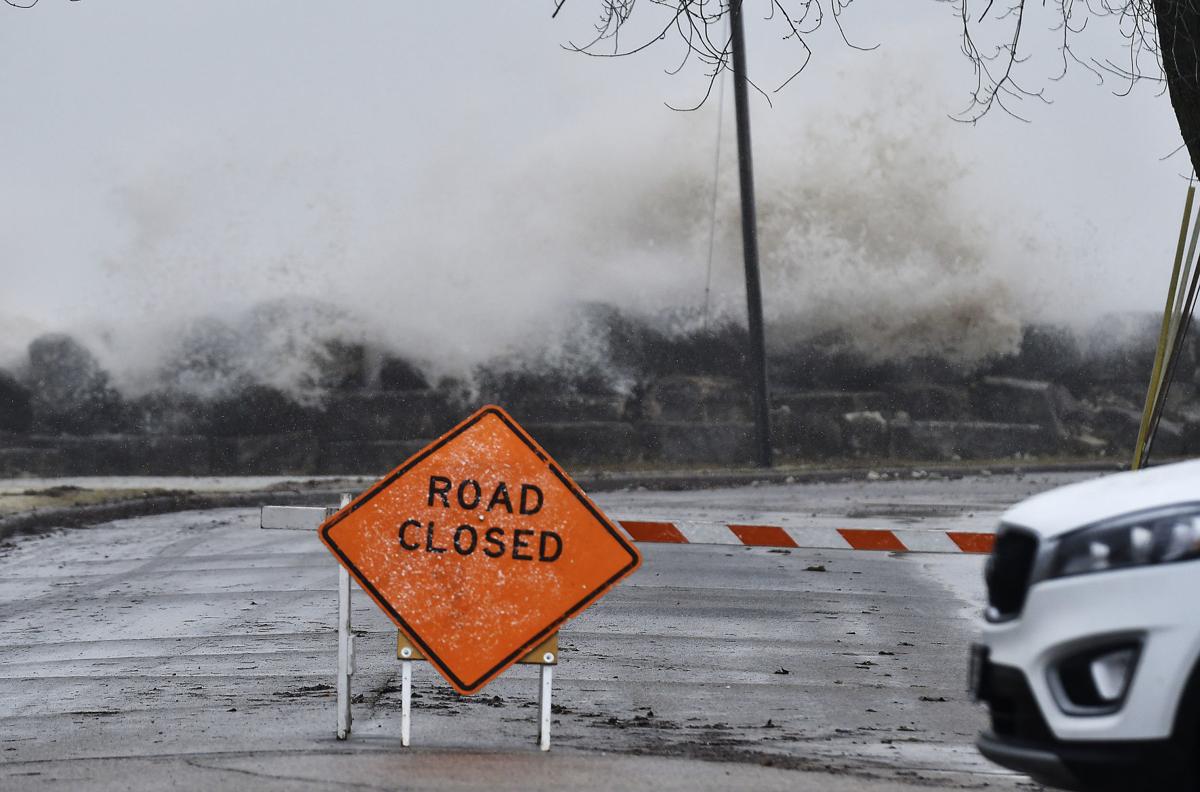 Waves breach the wall in the 7100 block of First Avenue on Saturday. Have a photo you’d like to share? Send it to newsroom@kenoshanews.com.

“This is the worst I’ve seen it in 25 years,” Elliott said, her husband remarking that they could feel the rumble of the waves inside their house. But the couple, who live on 71st Street just west of First Avenue in Allendale in Kenosha, weren’t complaining. “It’s a free show, and it’s an exciting show.”

“It’s kind of spectacular,” Lt. Joe Riesselman of the Kenosha Police Department said. “The waves have been crashing up onto a lot of the streets all morning.”

The National Weather Service issued a lakefront flooding warning from Sheboygan south into Illinois, with 10 to 13 foot waves expected.

With a quarter century living near the lake, Elliott said there have been plenty of times that waves have come over the huge rocks lining the shore along First Avenue to prevent erosion. “But I’ve never seen it so high in my neighbor’s yard,” she said.

At Eichelman Park, the normally placid beach, which is protected by a breakwater, giant waves crashed onto the shore and across a sidewalk.

The breakwater was invisible under the waves, the beach largely underwater.

Greg Marston brought his 7-year-old son Greyson to see the waves. He said they live nearby and swim at the beach every chance they get during the summer. “Not today,” Greyson said.

“I’ve never seen the water come up this far,” Marston said, pointing out to his son where they would normally be on the beach. “I was reminding him that this summer we would be right out there.”

Streets closed due to flooding

Dennis Schmunk, superintendent of the Kenosha Street Department, said several streets near the lake were closed due to flooding from the storm surge, including First Avenue between 71st and 75th streets, 50th Street at Simmons Island, Fourth Avenue at 51st Place and 45th Street near the harbor boat ramp.

“A lot of people are saying they’ve never seen the water this high,” he said.

Lake Michigan is at near record high levels according to the National Weather Service, with unusually wet weather over the last 18 months contributing to the rise. According to the agency, the lake level has climbed by six feet since 2013, when water levels were unusually low.

The high water has contributed to erosion problems along the lakefront. In the most serious case, a Somers home was torn down in November after erosion on the shore left the house dangling precariously on the bluff.

Denny VanCleve, meteorologist with the National Weather Service, said Saturday’s storm produced wind gusts of up to 58 mph. “It really piles up the water between the wind and the lake levels,” he said.

Away from the lake, Kenosha County missed the worst of the predicted winter storm. Rain and sleet mixed with snow overnight Friday and throughout the day Saturday. VanCleve said sleet will turn to snow and continue until until about midnight, predicting as much as five inches of snow could fall in the area before Sunday morning.

City and county street departments began salting roads at about 3 to 4 a.m. Saturday, and police and sheriff department spokesmen reported that roads were in fairly good condition throughout the day, with few serious weather-related crashes.

“Drivers should be careful,” Schmunk said, saying it was likely to get icy as temperatures dropped overnight.

Waves breach the wall in the 7100 block of First Avenue on Saturday. Have a photo you’d like to share? Send it to newsroom@kenoshanews.com.