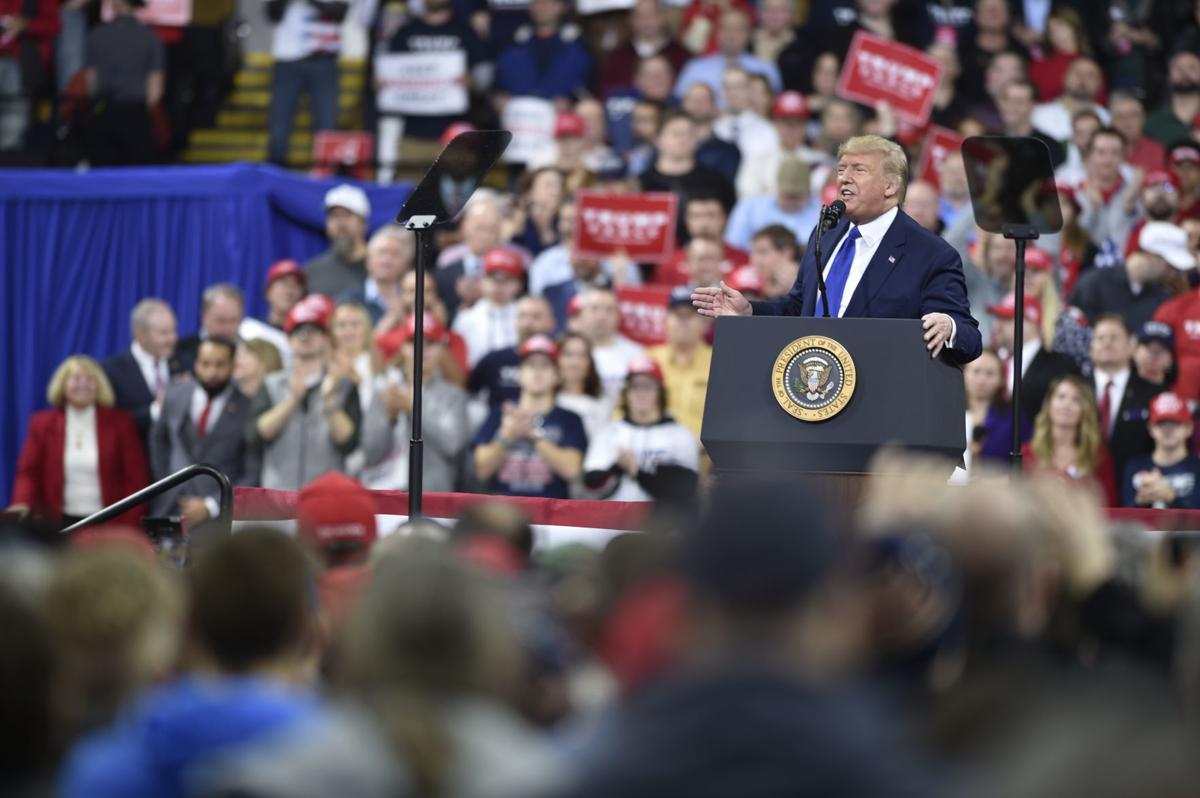 President Donald Trump addresses a packed UW-Milwaukee Panther Arena Tuesday evening, speaking for about 1½ hours about a variety of topics as the 2020 presidential race heats up. 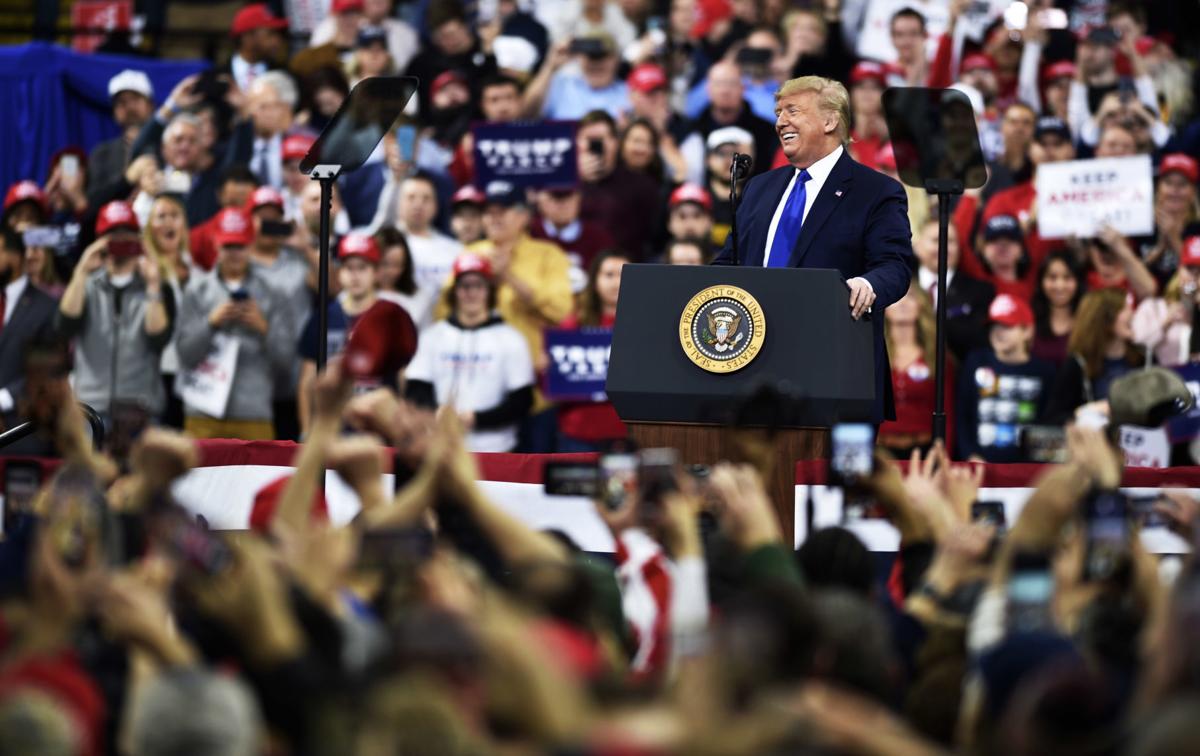 President Donald Trump smiles while addressing the crowd at a rally Tuesday night in Milwaukee.

MILWAUKEE — During President Donald Trump’s rally in Milwaukee Tuesday, he talked about a litany of topics, from the 2012 Benghazi attack to tensions in the Middle East to the Green Bay Packers to dishwashers.

And his supporters loved it, oftentimes drowning out the speech with cheers chants and boos for his opponents.

Cheers were deafening as Trump meandered to the microphone, almost drowning out the song “God Bless the U.S.A.” playing over the loudspeakers.

He started by talking about trade deals, forecasting that the United States-Mexico-Canada Agreement (USMCA) would be finalized soon, replacing the North American Free Trade Agreement (NAFTA), which the president called “one of the worst trade deals in the history of the world.”

Next, he mentioned the Green Bay Packers, getting more cheers from the cheesehead-filled crowd, and then called quarterback Aaron Rodgers “a good guy.”

This was followed by Trump saying that his administration had “fully rebuilt the American military” to be “more lethal and more powerful than ever,” and then talking about the controversial killing of Iranian General Qasem Soleimani, who had been designated as a terrorist by the U.S. long before Trump was elected.

He then claimed that Mexico will still be paying for “The Wall.” He implied that news will come out “soon” about how Mexico would pay for the wall on the U.S. side of the border, but provided no details. “You’ll see that. It’ll come out.”

Later he said the wall “is fully financed now.”

The president said that “violent criminal aliens” were able to enter the U.S., and commit murder and burglary here, because Democrats weren’t strong enough on the border.

Trump also talked about not wanting “another Benghazi,” the 2012 attack on an American compound that left four Americans and seven Libyans dead. The incident has continued being a black spot on Hillary Clinton’s reputation; she was the secretary of state at the time.

Trump said that was why he sent Marines in “very expensive” Apache helicopters to the U.S. Embassy in Iraq when it was attacked.

Sticking with the topic of foreign policy, the president defended his decision to keep troops in Syria after saying he would pull all the American troops out to protect oil fields.

“We have the oil really secure,” he said. “We can help our friends the Kurds because that’s where they’ve got their wealth.”

The president also talked about dishwashers for a few minutes, a topic that’s been on his mind at rallies for at least a month.

He boasted about new regulations his administration is working on that will allow dishwashers to use more water, a change Trump said will help make dishwashers more effective even though it would roll back environmental regulations.

Soon after, he claimed that environmental regulations have apparently forced a dirge of water faucets that don’t work.

He concluded: “We’re getting rid of the restrictors.”

Protesters: At least five opponents of the president were thrown out of the rally by security after they interrupted the speech. The first of them carried a sign that said “No War.” Trump referred to the man as “a very weak voice.”

Abortion: Both Vice President Mike Pence and Trump criticized Democrats for not opposing abortion. The president called the Democratic party “the party of late-term abortions” and followed that up by saying “Republicans believe every child is a sacred gift from God.”

Race: “African-Americans are joining the Republican Party. They love us and we love them.” After the president said that, there were loud cheers from the crowd, which was largely white. Black voters’ support of the president is the highest it’s ever been, 35%, according to an Emerson poll published last month.

Drugs: “We are aggressively combating the opioid epidemic,” Trump said. On fentanyl, “people are dying. We’ve got to do it.” In November, China said it was cracking down on the transportation of fentanyl, which Trump requested.

Education: Trump supports school choice and said he wants to get kids “out of failing government schools.”

Not-so-kind nicknames: Several of the president’s political opponents gunning for the White House were played for laughs by Trump. Among the names he dropped were “Sleepy” Joe Biden, Elizabeth “Pocahontas” Warren, “Crazy” Bernie Sanders and “Nervous” Nancy Pelosi.

Religion: Trump referred to “In God We Trust” as “the great American motto,” getting cheers from his audience. Among the president’s biggest supporters nationwide are evangelical Christians. He also vowed to protect religious freedom.

From doing the wave to stadium rock anthems, Trump rallies feel a lot like sporting events

President Donald Trump addresses a packed UW-Milwaukee Panther Arena Tuesday evening, speaking for about 1½ hours about a variety of topics as the 2020 presidential race heats up.

President Donald Trump smiles while addressing the crowd at a rally Tuesday night in Milwaukee.