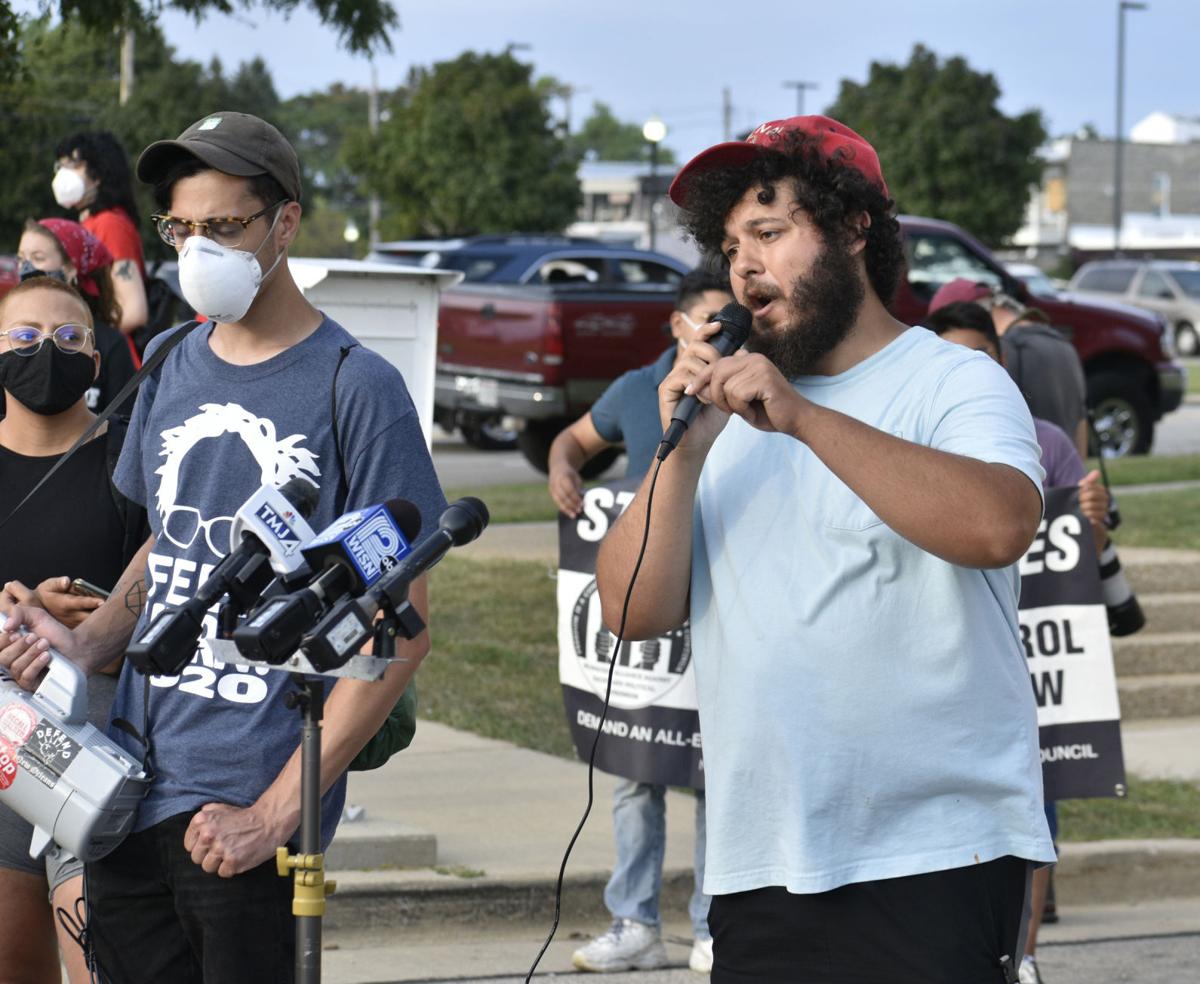 Kenosha resident Victor Garcia, 23, a UW-Parkside student, speaks to the media Friday about his 24-hour stay in jail after a curfew violation Wednesday night. 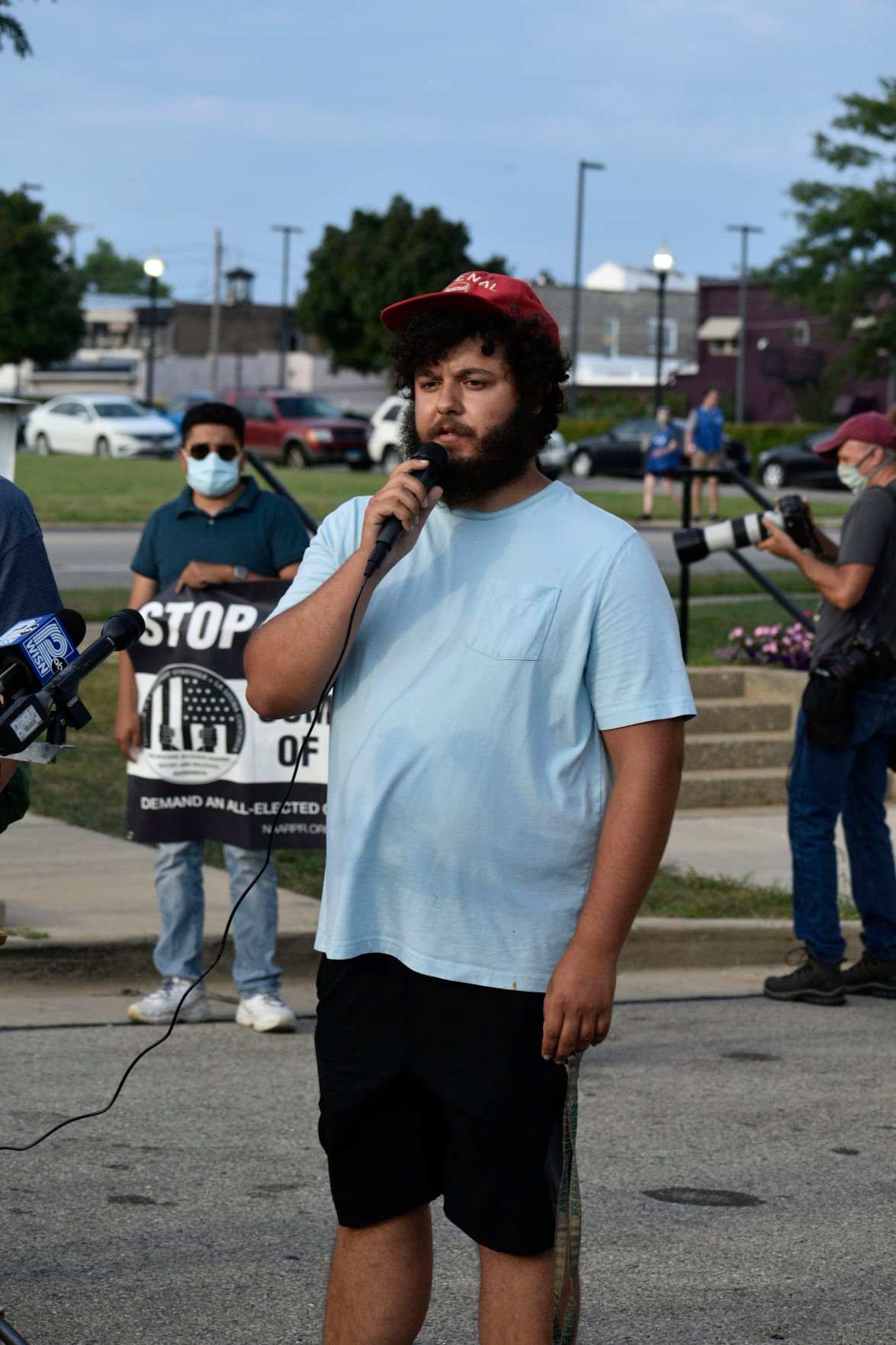 UW-Parkside student Victor Garcia addresses the assembled media during a press conference Friday night in front of the Kenosha Municipal Building. The press conference and a march that followed were hosted by The Milwaukee Alliance Against Racist and Political Repression.

UW-Parkside student Victor Garcia and a group of classmates had every intention of participating in a rally Wednesday night to support Jacob Blake, the 29-year-old man shot by Kenosha police officer Rusten Sheskey.

But the college students never got to their destination, and instead quickly found themselves in a situation they didn’t anticipate with law enforcement.

And what followed, according to Garcia, was a long and difficult 24-plus hours while he waited for answers.

Garcia, a Kenosha resident, recounted his ordeal that had him in custody for what he called a curfew violation and “other possible charges” during a press conference Friday night in front of the Kenosha Municipal Building.

The press conference was hosted by the Milwaukee Alliance Against Racist and Political Repression and included a number of speakers before the group hit the streets for a march in support of Blake.

Garcia, 23, who is a member of the Students for a Democratic Society, said his group initially was stopped by federal agents, who at the time didn’t indicate they were law enforcement.

“They didn’t announce themselves, (had) guns draw, everything like that,” Garcia said in an interview after the press conference. “I was tackled to the ground, I had a gun in my face. From there, I was handcuffed, and it became clear they were law enforcement, and we were swarmed by seven other cars. Then we were all separated, taken and eventually handed over to Kenosha County police.”

With the events of this week, which have ranged from peaceful protests to violent riots and two shooting deaths, Garcia said not knowing exactly who was taking him to the ground led to plenty of instant anxiety about the situation.

“(I felt unaccounted for) almost immediately, when the first fear of (the officers) being white supremacists or these vigilantes that have been parading around our neighborhood,” he said. “It was clear I was a political prisoner at that point. No one read me my rights the entire time.

“Basically from the time I was arrested, I was not legally accounted for, because I was not processed until the following day. Anything could have happened to me.”

Garcia, who said his group was stopped for the curfew violation — which has been in place all week in response to the civil unrest — near Union Park. There were three others in his group, with one who evaded being arrested, and Garcia said they all have a court date in October.

“We’re working with a couple lawyers right now to help get those charges dropped,” he said. “I don’t really see anything wrong with exercising your First Amendment right. We’ll see what happens there.”

As it turns out, the initial arrest was just the start of a difficult 24-plus hours for Garcia.

When he was first arrested at about 8:30 p.m., Garcia said he was taken to the Kenosha County Detention Center, where he was put into a jail cell with 14 other men.

“In a middle of a pandemic with no masks,” he said. “I wasn’t booked until the following morning at 8 a.m. so there was no record of where I was, if I was OK. I had no way of contacting individuals to get me out of there, so basically, I was held captive against my will by local law enforcement and the federal government.”

Garcia said he was taken from KCDC to the downtown facility, where he stayed until his release Thursday night at about 8:30 p.m.

When he was finally able to bond out, Garcia said he was overcome with a range of emotions.

“I just started crying,” he said. “I had spent 24 hours locked in a cell against my will, and I had not committed any crime other than a made-up curfew by the U.S. Government because they don’t want us exercising our First Amendment rights.”

As for what drew him back to the area, the press conference and any potential rallies or protests Friday night?

Garcia said he can’t give up what he believes in, no matter what circumstances he had faced just one day before.

“I felt it was important to strike while the iron was hot,” he said. “I’m scared right now. I was scared (Thursday) night. I’m going to be scared for a long time. It was a traumatic experience, I’m going to be completely honest.

“But I thought it was important to be a leader for this community and let these people know what these unmarked cars are like. We can read about it in Portland and wherever it’s happening, but to actually live through that experience, it’s almost mind boggling that it’s allowed in a country that parades freedom as its finest virtue because mine was stolen from me.”

Perhaps the most disappointing aspect, Garcia said, was that he felt betrayed by a community he grew up in.

“I love this community, and that’s how I was rewarded (for) standing up for people who are being unjustly killed and taken down by law enforcement,” he said. “I was locked in a cage.

“... You’re put in that situation as a caged bird, all because you wanted to go out there and have a voice for people who no don’t have voices. They strip you of your freedom, and you are treated like an animal. I was no longer a free American, I had a number, I had no name, I wasn’t a person.”

Street medics stand at the ready to respond

Crowded Civic Center Park minutes before it is cleared

Holding hands during a protest

Sign says "If you are not angry you're not paying attention"

Drone in the sky

Man, who was asking protesters to "stop throwing" stuff, stands up close to the fence

At right, man scampers back after approaching law enforcement and then being peppered with less-lethal munitions

On a bike, on their phone, during a protest

Holding a sign in the area between the park and police

National Guard behind the fence

Protesters up against the fence

Red white and blue above protesters

National Guardsmen behind the fence

Protesters beside burned out garbage truck

Street medics have a group huddle

Medic station at the ready

Bob Goss pleads for no looting

Listening to the man in the middle

Gloved fist in the air

"Save Kenosha" reads boarded up building

Roller skating during the early protest

Armed individuals outside of gas station chat with BLM demonstrators

Armed individuals outside of gas station chat with BLM demonstrators

Smashed window from night before

Dumpster being pushed toward law enforcement; it ended up serving briefly as a barricade

On fire dumpster rolls down SHeridan

Demonstrators use a blue umbrella to distract law enforcement, who later used less-lethal ammunition to damage umbrella and push back those holding it

WITH VIDEO: Women for Trump Bus tour rolls into Kenosha for a high-energy campaign stop

As part of a two-day blitz, the Women for Trump bus tour made a quick stop in Kenosha on Wednesday morning. A crowd of about 75 sign-waving en…

In Waukesha, Trump gets his biggest crowd of a day of rallies

WAUKESHA — President Donald Trump assured supporters packed shoulder to shoulder at a trio of rallies Saturday that “we’re rounding the turn” on the coronavirus — despite spiking cases — and mocked challenger Joe Biden for raising alarms about the pandemic. Meanwhile, Biden bemoaned to a smaller gathering the need to campaign at a distance but said he understood the public health reasons behind it.

Kenosha resident Victor Garcia, 23, a UW-Parkside student, speaks to the media Friday about his 24-hour stay in jail after a curfew violation Wednesday night.

UW-Parkside student Victor Garcia addresses the assembled media during a press conference Friday night in front of the Kenosha Municipal Building. The press conference and a march that followed were hosted by The Milwaukee Alliance Against Racist and Political Repression.