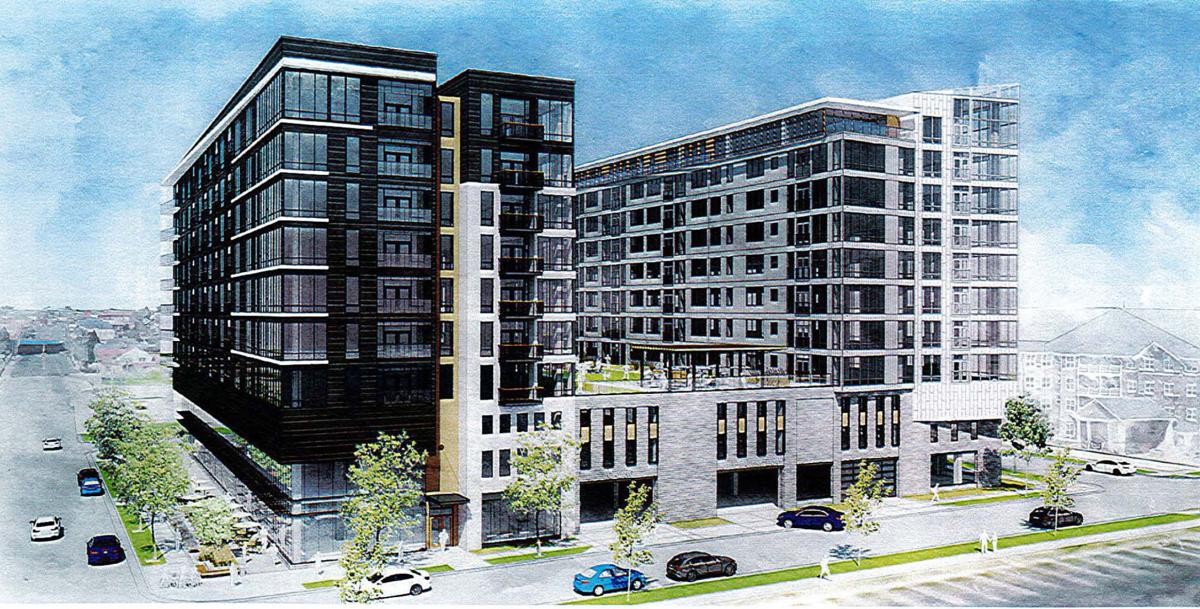 This is an artist’s rendering of the proposed Brindisi Tower, to be located on the north side of 52nd Street between Seventh and Eighth avenues. This view is looking west.

This is an artist’s rendering of the proposed Brindisi Tower. 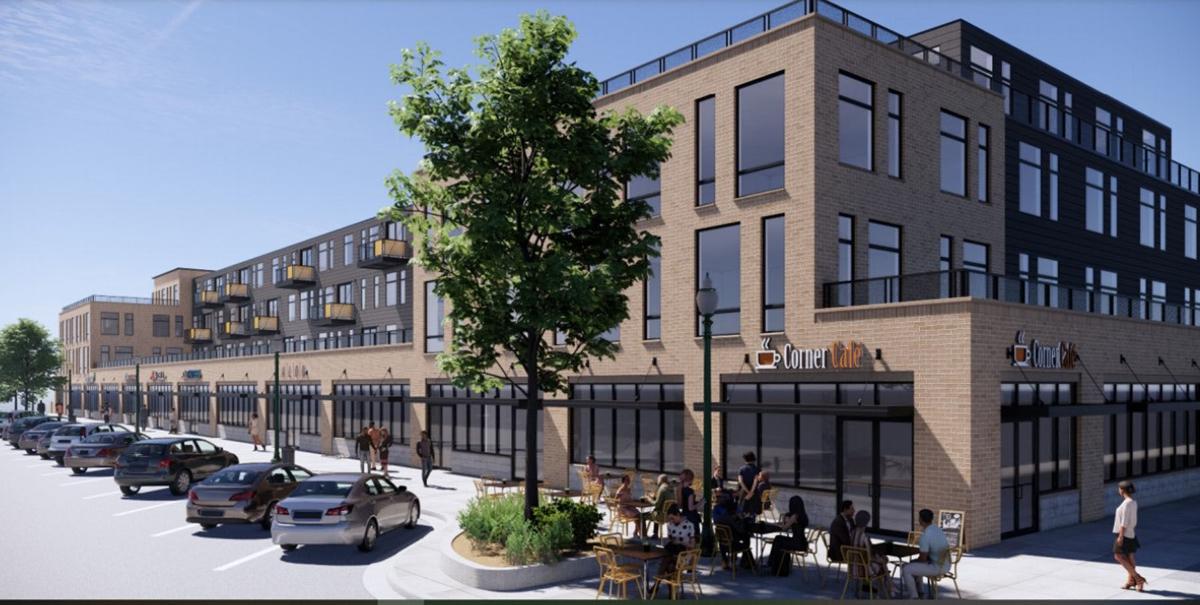 An artist’s rendering shows the proposed “Uptown Lofts” project. The mixed-use retail/residential complex is proposed to be located on either side of the public alley between 22nd and 23rd avenues, south of 61st Street. 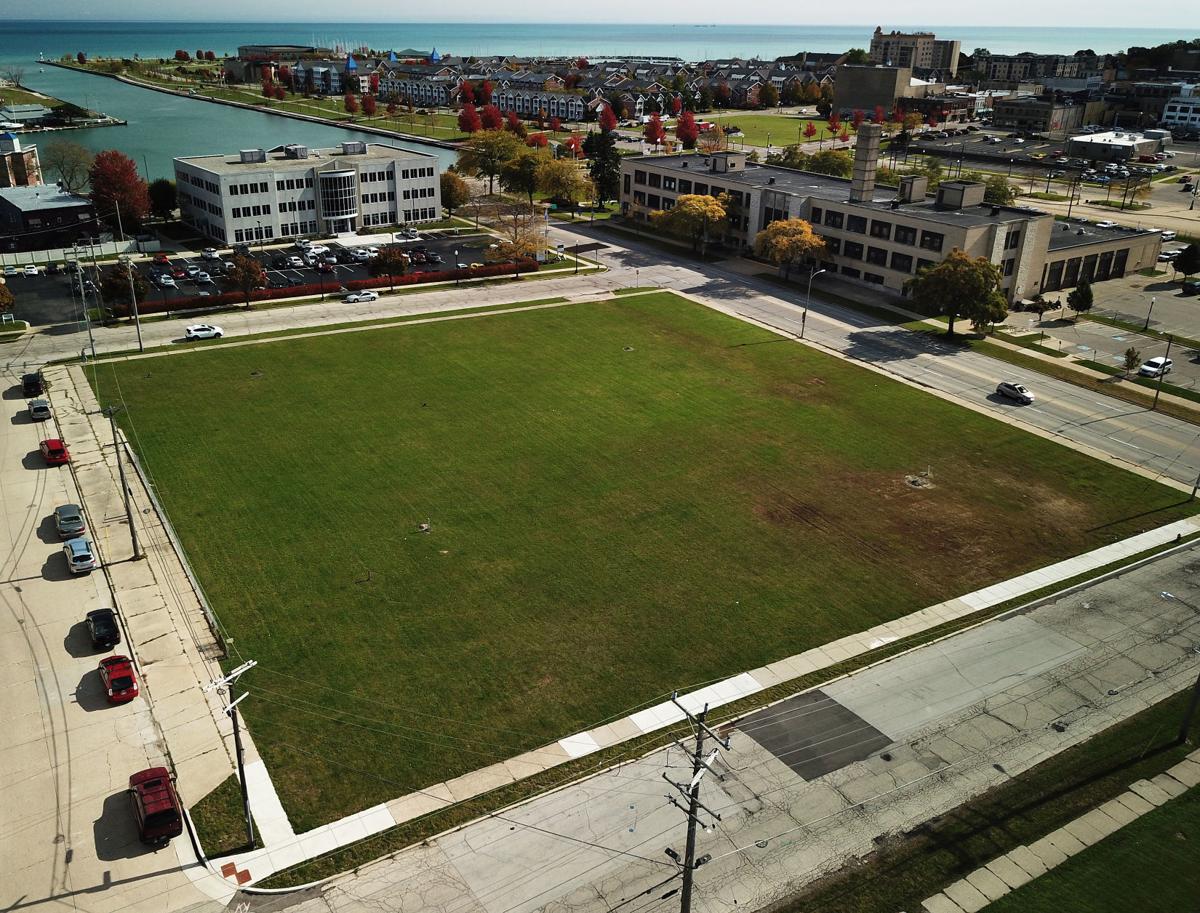 BELOW: This image shows the site of the Brindisi development just north of the Kenosha Municipal Building on 52nd Street between Seventh and Eighth avenues. 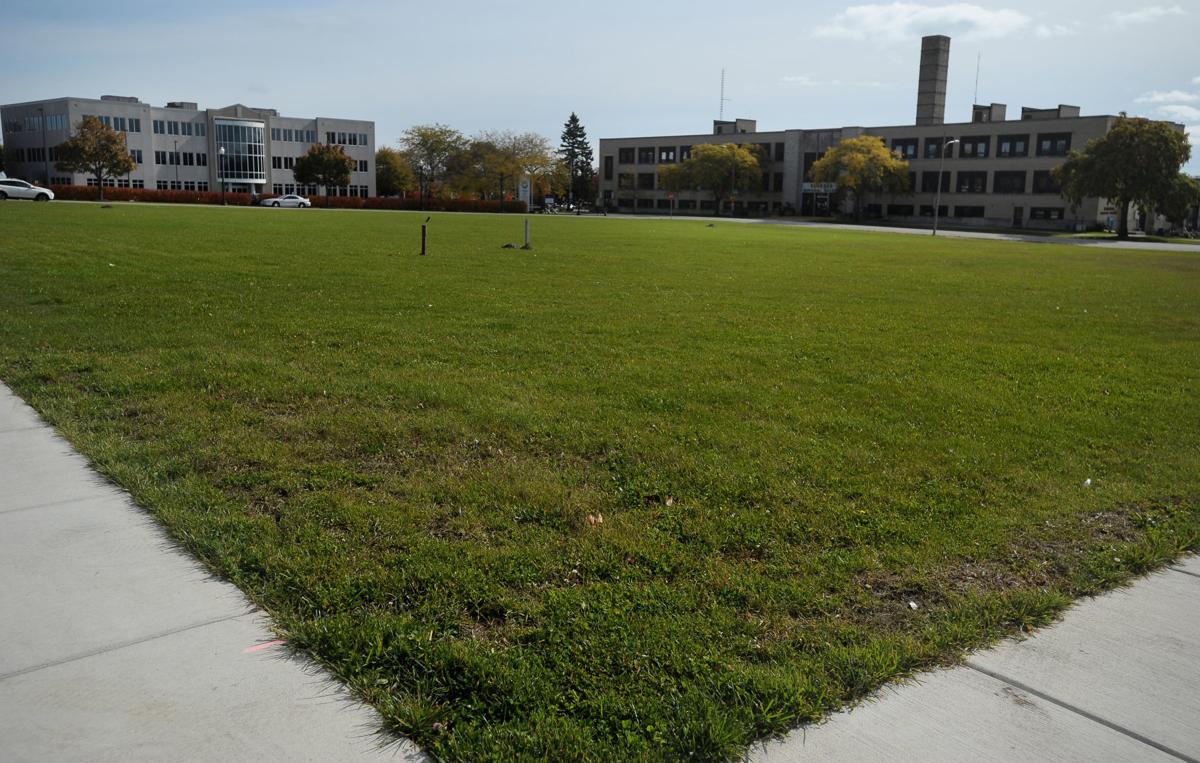 The site of the Brindisi development just north of the Kenosha Municipal Building on 52nd Street between Seventh and Eighth avenues. 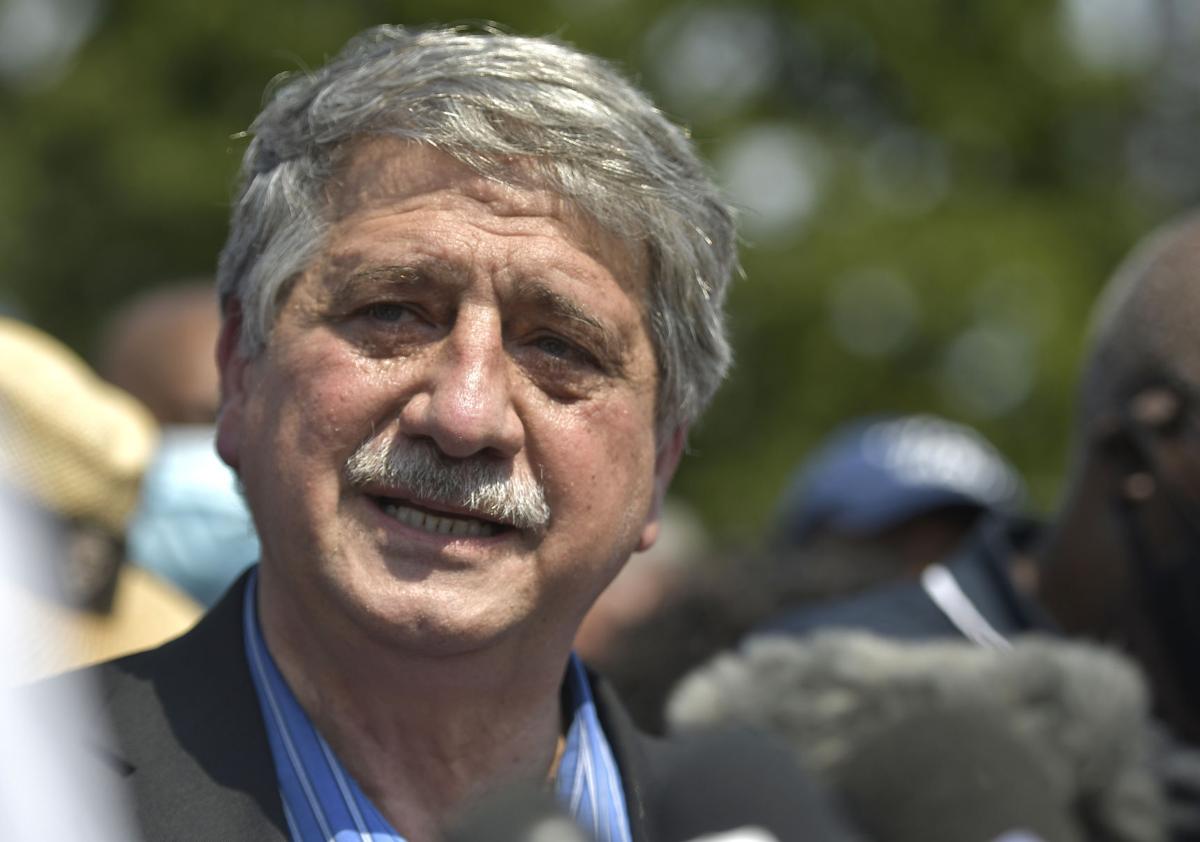 The vision for Kenosha’s $400 million Downtown revitalization project, along with a plan to develop affordable housing in the city’s Uptown district, are moving closer to fruition.

Dubbed the “Downtown Vision”, the eight-block redevelopment initiative includes a brand new City Hall, a performing arts center, and a “yet to be determined” high-end hotel. Things should come into sharper focus as the city administration prepares to present a developer’s agreement to three city panels and the City Council for consideration in December.

The agreement would be presented for review and recommendation to the Public Works, Public Safety and Welfare and Finance committees in the next week or two, before going before the full City Council for final project plan consideration by the end of the year.

Downtown VisionMayor John Antaramian said the long-anticipated Downtown Vision project has been in the works for the last two years. He expressed enthusiasm for what it aims to bring to Downtown.

The plan calls for two 11-story towers, known as the “Brindisi Towers,” featuring luxury apartments and condominiums with restaurant and retail space on the ground floor.

“This is a brand new theater to be built at Sheridan Road and 52nd Street,” he said. Adjoining it would be the hotel. Housing units and first-floor commercial space is also planned, he said.

As part of the Downtown development, City Hall, currently in the Municipal Building at 625 52nd St., would be relocated. The new City Hall is proposed to be built at the northeast corner of 56th Street and Sheridan Road, just north of the post office and east of the courthouse, in a site that was at one time the city’s police station.

Antaramian said the current City Hall is not in good shape and needs to be replaced. The municipal building would be razed and then transformed into a city park.

“This building has long lived past its life cycle,” he said.

According to the plans, the current construction of a new parking ramp at 56th Street and Eighth Avenue will add 356 parking stalls to accommodate the anticipated increase in activity in Downtown.

As part of the developer’s agreement, the city would be responsible for providing parking and the City Hall building would be donated to the city, he said.

“We’re thrilled to be moving forward with some major developments that will benefit Kenosha now and into the future,” he said.

City officials said the future Downtown plans would further complement plans for redevelopment of Uptown, which also bore the brunt of the civil unrest and destruction that took place following the Kenosha police shooting of Jacob Blake. Blake, a Black man, was shot seven times in the back by Rusten Sheskey, a white police officer on Aug. 23. The incident touched off daily protests and late-night rioting and looting that led to an estimated $50 million in damage to businesses in the Uptown and Downtown areas.

Antaramian said the residential units are being designed as affordable housing. The commercial retail space is also intended to include many original tenants of the Uptown district that were recently displaced.

“It’s being done in a way as try to enable those individuals whose buildings were damaged to come back,” he said.

A conditional use permit application for Uptown Lofts is expected to be reviewed before the Plan Commission early next year.

“The Uptown and Downtown projects tie in, in so many different ways,” he said.

Along with the two projects is the city’s development of the Chrysler site, east of 30th Avenue between 52nd and 60th streets, with plans to establish an education/research/technology center focused on jobs of the future.

“When you look at the redevelopment of the neighborhoods, all of that plays a part in the Uptown Area with the Gorman project, the Brown Bank, the Chrysler project and the educational aspects that will go along with it,” he said.

The projects would also become part of the Smart City design. Earlier this year, the city entered into a partnership with SiFi Networks to develop a fiber optic communications network enabling Kenosha’s transition to become a FiberCity.

Ald. Bill Siel, whose district covers Downtown, said the development agreement for the revitalization effort couldn’t have come at a better time.

“It’s coming at the end of a very tumultuous year. But it also signifies that the city is moving forward with what it has been intending to do for a long time now — to transform a former industrial area into a commercial, highly residential area,” he said.

Ald. Jan Michalski, who represents the Uptown area, said he is encouraged at the quick turnound in attracting a developer, such as Gorman, to bring forth a project for affordable housing and commercial space. Gorman also developed the Stella Hotel and Ballroom, 5706 Eighth Ave., which opened in April last year, restoring the century-old former Elks Club in Downtown.

“There is a need for affordable apartments in the Uptown area,” he said.

The tax credits used to develop the Uptown Lofts, would ensure that the majority of the units, about 80 percent, would be subsidized affordable housing, and the remaining offered at market rate, he said.

“They’re also looking for tax credits for the storefronts below. So, there’s going to be an opportunity for the people who can move in there, it’ll be at least as inexpensive as they had before for any business that wants to move back,” he said. “The alternative, of course, is to have a bunch of rubble and empty lots. This is an exciting thing we’re turning around. It’s exciting because this kind of thing could possibly incentivize other people to come in and invest in the area … and that is a good thing.”

With the Kenosha County District Attorney’s decision not to bring criminal charges against the Kenosha Police officer who shot Jacob Blake, lo…

This is an artist’s rendering of the proposed Brindisi Tower, to be located on the north side of 52nd Street between Seventh and Eighth avenues. This view is looking west.

This is an artist’s rendering of the proposed Brindisi Tower.

An artist’s rendering shows the proposed “Uptown Lofts” project. The mixed-use retail/residential complex is proposed to be located on either side of the public alley between 22nd and 23rd avenues, south of 61st Street.

BELOW: This image shows the site of the Brindisi development just north of the Kenosha Municipal Building on 52nd Street between Seventh and Eighth avenues.

The site of the Brindisi development just north of the Kenosha Municipal Building on 52nd Street between Seventh and Eighth avenues.