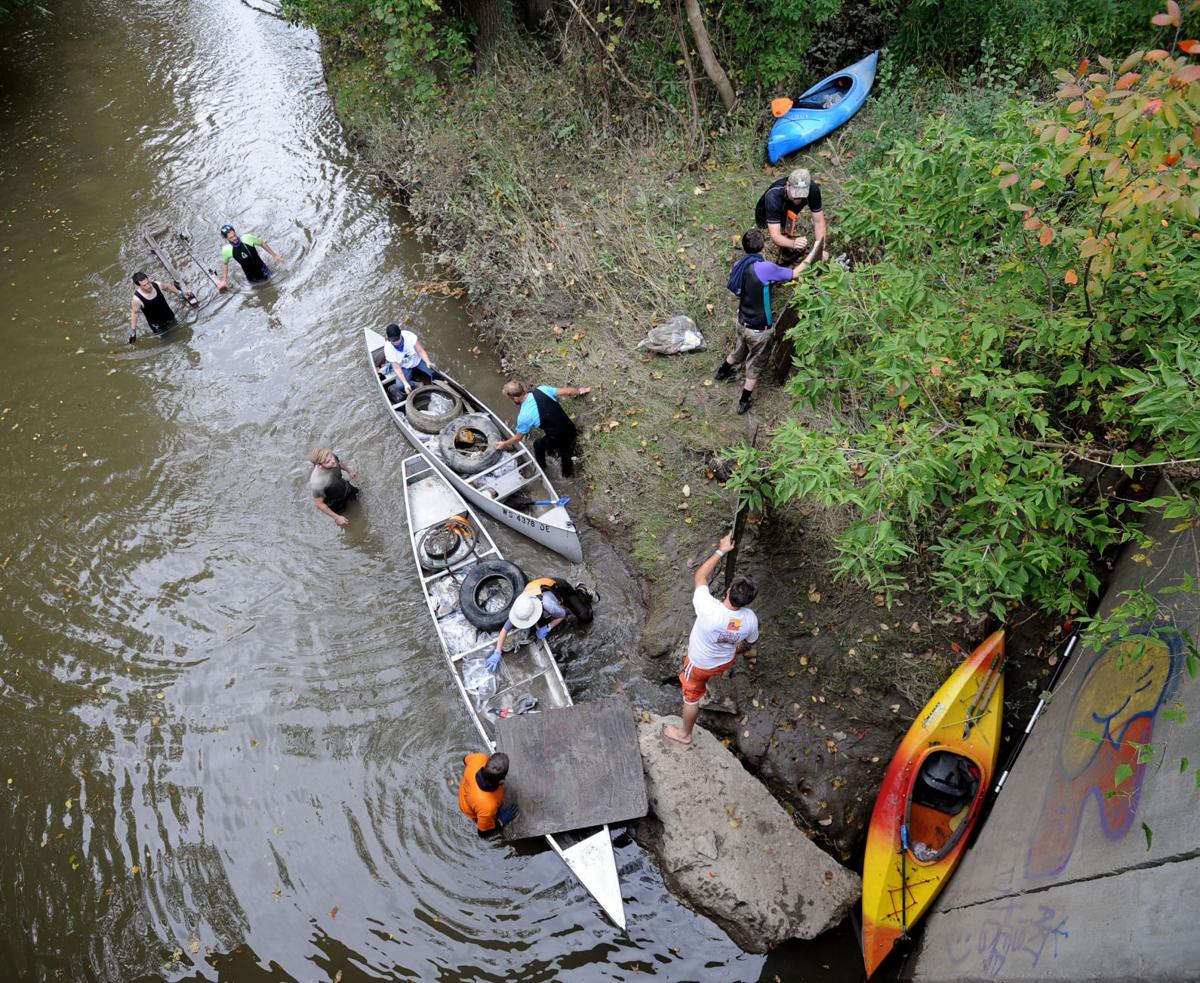 A group hauls garbage from the Pike River near Highway E during the Pike River Cleanup event on Saturday. See more with this story at kenoshanews.com. 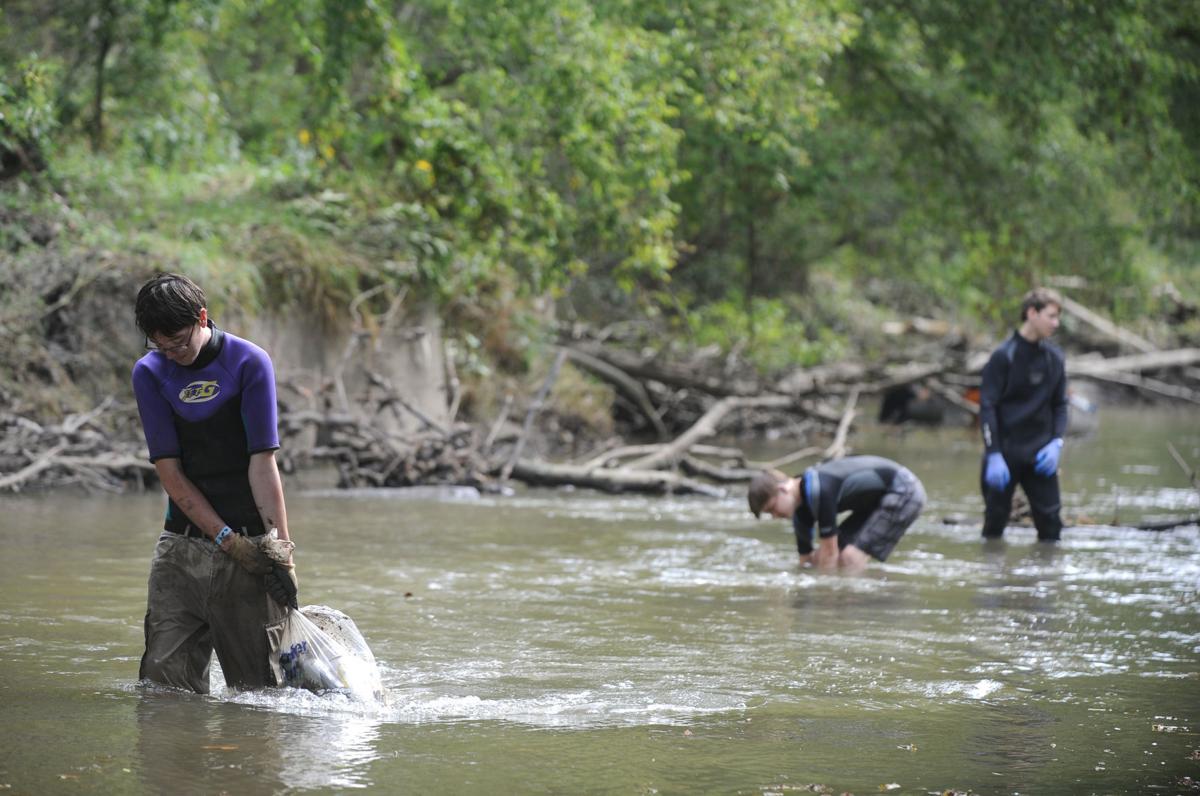 From left, Morgan Mayer, 17, Johan Meyer, 13, and Zach Kozmer, 18, look for garbage during the Pike River Cleanup event on Saturday, Sept. 21, 2019. The Root Pike Watershed Initiative Network is working to ensure that the Foxconn development does not have a negative impact on the Pike River. 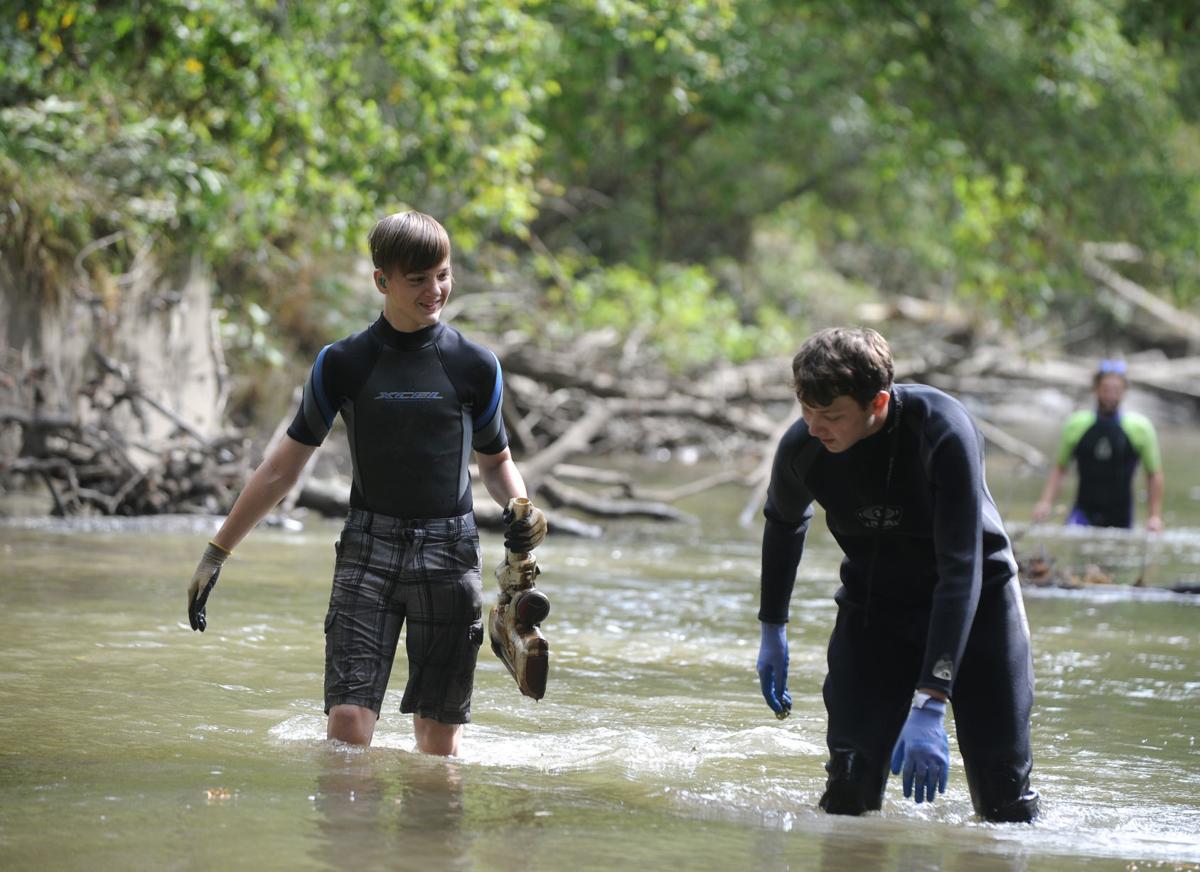 Jonah Meyer, 13, left, carries a piece from a vacuum cleaner he found during the Pike River Cleanup event on Saturday. Working with him is Zach Kozmer. 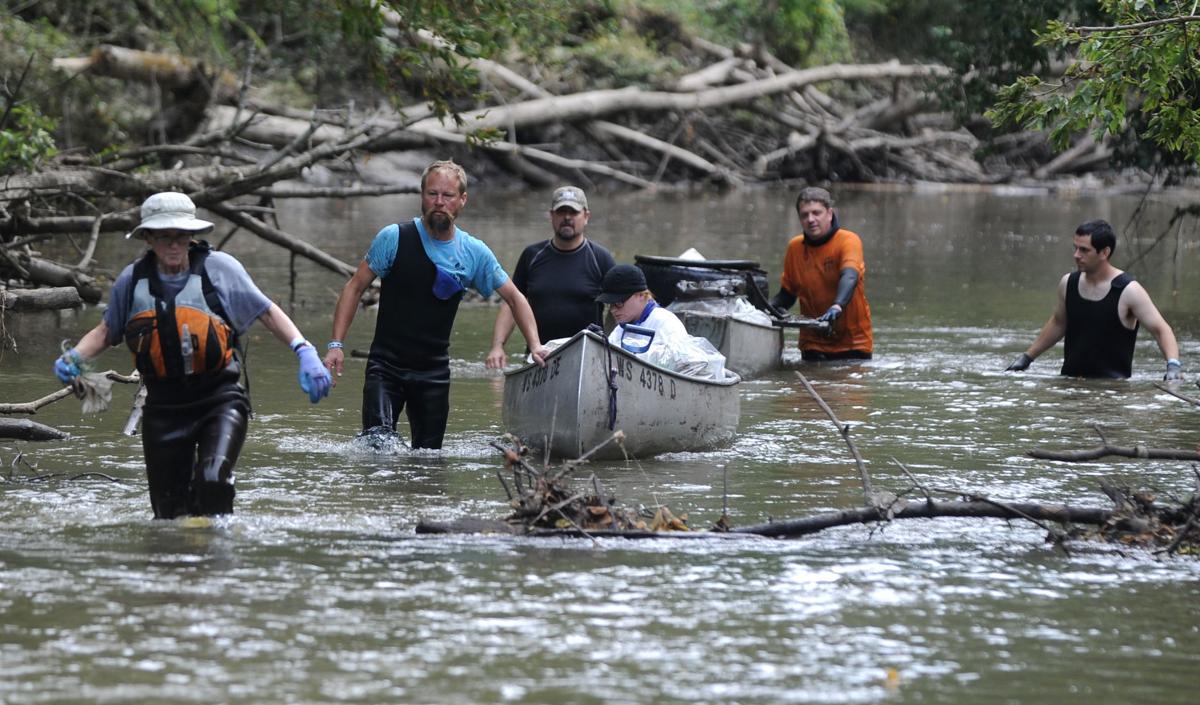 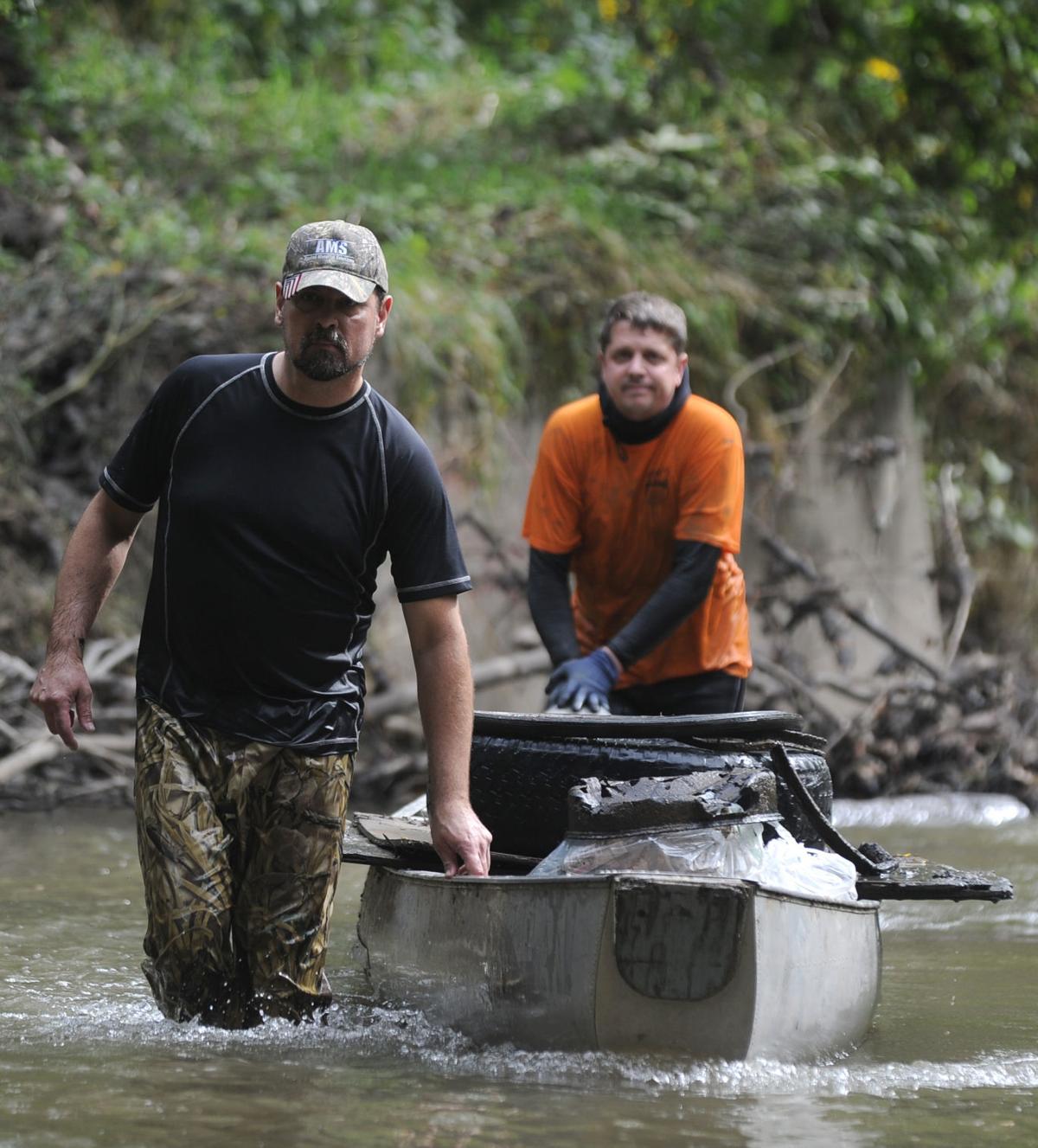 Dave Mayer, left, and Dan Meyer haul garbage with a canoe during the Pike River Cleanup event on Saturday, Sept. 21, 2019. 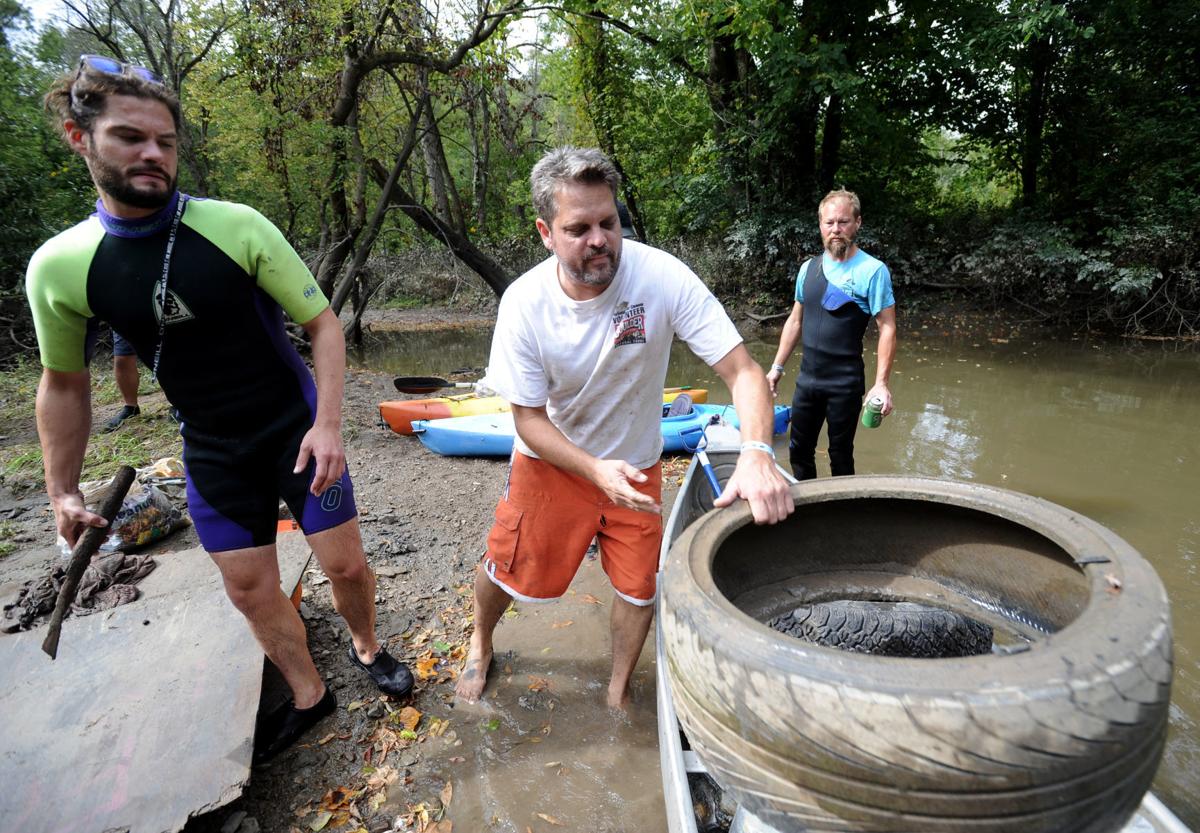 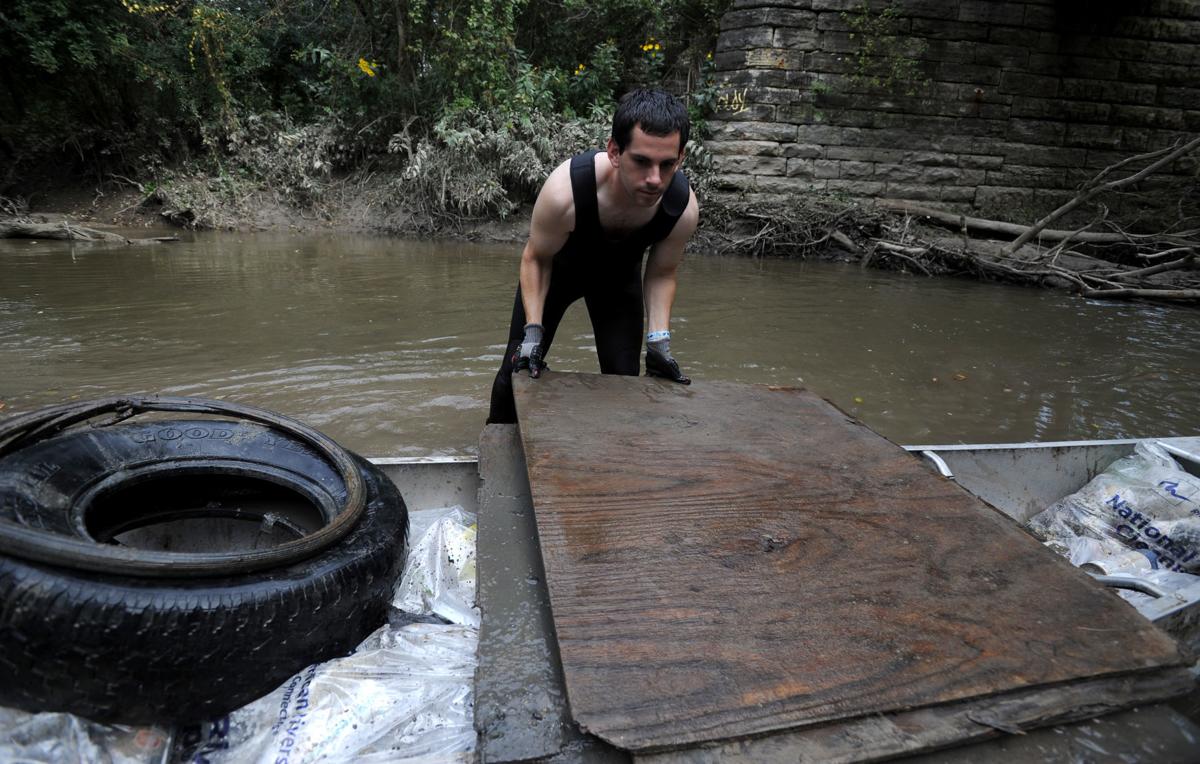 SOMERS — They came so salmon will return to spawn here and “dogs can run around and chase squirrels.”

On Saturday, some 60 community volunteers came out to help clean up the waterways and byways of the Pike River.

Many were from service organizations and sponsoring business; others were families and individuals trying to make a difference in their environment.

The event was the 12th annual Pike River Cleanup, hosted by the Kenosha Sportfishing and Conservation Association in conjunction with Kenosha County Parks, the Wisconsin Department of Natural Resources, the Root-Pike Watershed Initiative Network and American Rivers.

By 8:30 a.m. Saturday dozens of volunteers had assembled at Picnic Shelter No. 4 at Petrifying Springs Park to receive basic information, safety instructions and assignments to an area of the park or the river on which to concentrate their efforts.

The volunteers fanned out in a five-mile radius from the park, along Green Bay Road, highways A and E and east to Carthage College along Sheridan Road.

Some brought kayaks or canoes and took to the waters, other individuals and groups walked roadsides into and near the park, scouring the ditches for debris large and small.

Due to rain, the cleanup ended a bit short of its 2 p.m. anticipated close, but much was accomplished said Jim Zondlak, event team leader.

During the five hours of the event, volunteers collected two dumpsters worth of trash as well and rounded up 10 discarded tires.

It was actually less than in some years, noted Zondlak.”The 5½ inches of rain we had lifted up anything and flowed it out to Lake Michigan so there wasn’t as much debris as usual.”

A majority of Saturday’s volunteers were members of companies and service organizations who helped sponsor the event, said Lynn Davis, president of the Kenosha Sportfishing and Conservation Association.

“Their support was more than financial, they sent people,” she said.

Kenosha County donated use of the picnic shelter and the removal of debris packed into the park’s dumpsters.

People who usually come to the cleanups include members of the Boy Scouts and college students, said Lynn Davis, president of the KSFCA.

“We like helping our environment,” said Patti Molitor, as she held a heavy duty plastic bag for her daughter, Sam to drop in a beer bottle.

Sam, who recently graduated from the University of Minnesota with a degree in ecology, came down from St. Paul, Minn., specifically to join her parents in the cleanup effort.

“Cigarette butts are one of the leading causes of death in seagulls,” she noted. “The birds eat them and they block the birds’ digestive tract.”

“I can’t believe all of the beer bottles; it’s a sad statement about our society,” said her father Lou Molitor as he worked a patch of roadside.

He said he has participated in the cleanup for the past six years. “The Pike River is certainly one of our important waterways; beautiful in some areas and incredibly polluted in others. We want to do our bit to make it nicer.”

Mike is a former Wisconsin DNR employee and Root-Pike Watershed Initiative volunteer board president. Although he and Ann live in Milwaukee’s Shorewood area, they are avid supporters of the Pike River Cleanup.

“The Pike and the other the rivers flow into Lake Michigan and are an important resource to have,” Ann said.

Other volunteers dropped by after the initial wave began making their rounds.

Lisa Conohan of Kenosha brought her children Jake Rakoczy, 11 and Myka Rokoczy, 7, to help out.

Conohan said she and her kids love make use of Petrifying Springs Park. “I take them to the playground and have their birthday parties here,” she said.

“We love wildlife and the outdoors,” she said. I want to teach them about volunteering and helping the environment.”

Asked why she wants to help clean up the park, Myka said, “So dogs can just chase the squirrels.”

The cleanup event was begun in 2009 by a group of kayers, Zondlak said.

A board member of the KSFCA, Zondlak took over the project several years ago.

“One of the objectives of the annual cleanup is to encourage the salmon (raised by the KSFCA in rearing ponds at the mouth of the Pike River) to come back and spawn,” Zondlak said.

“We want to make the waterway good for them as well as clean it up in general,” added Jim Davis, vice president of the KSPCA.

Each year the cleanup usually yields 20 tires. With this year’s count, the total collected since the cleanup began in 2009 is 250. “We also usually find lots of used oil, computers and rumble strips,” Zondlak said.

“One year we had a field’s worth of two-liter soda bottles,” Davis said.

“Clean water is very important to everyone and the event raises awareness of the Pike River as a resource,” said cleanup volunteer and Root-Pike WIN board member Roger Chernik.

Efforts to clean it up have transformed it from basically a deep ditch to what it is today, he said.

Volunteer averages have been around 20 but recent years have seen 50 and better.

“This was a banner year,” Zondlack said. “We had more new sponsors and private donors than ever. “ Even more important was the environmental impact, he said.

“Everyone who did what they did today can be proud.”

Judge declines, for now, to delay trial due to possible COVID-19 travel restrictions

At least for now, a Kenosha County judge has declined to postpone a homicide trial because an expert witness asked for a delay due to COVID-19…

A group hauls garbage from the Pike River near Highway E during the Pike River Cleanup event on Saturday. See more with this story at kenoshanews.com.

From left, Morgan Mayer, 17, Johan Meyer, 13, and Zach Kozmer, 18, look for garbage during the Pike River Cleanup event on Saturday, Sept. 21, 2019. The Root Pike Watershed Initiative Network is working to ensure that the Foxconn development does not have a negative impact on the Pike River.

Jonah Meyer, 13, left, carries a piece from a vacuum cleaner he found during the Pike River Cleanup event on Saturday. Working with him is Zach Kozmer.

Dave Mayer, left, and Dan Meyer haul garbage with a canoe during the Pike River Cleanup event on Saturday, Sept. 21, 2019.