On the Fourth of July authorities recovered a 20-year-old man after he fell off a sand bar and drowned in Lake Michigan off a Gary, Indiana beach.

Over Father’s Day weekend and into that following Monday, four youths were pulled from Lake Michigan and did not survive, three along Wisconsin’s southern shore in Racine and one on Indiana’s south shores in Michigan City.

Another was also pulled from the water along Michigan City's beach that weekend and was last reported on life support.

The unpredictability of a powerful body of water like Lake Michigan — the deadliest of the Great Lakes — is what is blamed for these recent tragedies.

At least 11 people have drowned in Lake Michigan in May and June of this year, bringing Lake Michigan water-safety and education to the forefront of public conversation, according to statistics maintained by the Great Lakes Surf Rescue Project.

So far this year, at least 16 have drowned in Lake Michigan, although that also includes boat crashes and winter incidents.  This was followed by Lake Ontario, Lake Erie and Lake Huron with six drownings each so far this year and none yet in Lake Superior, according to the Rescue Project.

There’s no quick way to treat the pandemic of weak swimmers, according to the experts.

The American Red Cross reports that four out of five Americans claim they can swim, but less than half can actually perform the five basic swimming skills, which include being able to swim 25 yards and treading water for at least 60 seconds.

That’s part of why Racine County’s government in Wisconsin is giving away 950 free memberships to a local aquatic center following the drownings.

But considering panicking people in the water can fatally drown in less than a minute, it can be a steep challenge for rescue crews to respond in time.

And swimming in a Great Lake when lifeguards aren’t on duty only increases the potential danger.

In Racine, lifeguards are stationed from 10 a.m. to 6 p.m. at North Beach, where one of the 2021 drownings occurred.

But the emergency happened about 6:30 p.m., 30 minutes after guards were no longer on duty. The other two Racine drownings happened in unguarded areas.

City leaders say they’re considering the measures, but no action has been immediately taken.

"Any time we have children that die in our community, it really rocks the emotions of all of us, especially when there’s senseless deaths that could have been prevented,” Schmaling said.

In Northwest Indiana, the recent water emergencies off Michigan City beaches have city officials re-evaluating the decision to forgo lifeguards this year and considering the addition of more water safety equipment.

In addition to the drownings over Father's Day weekend, Donald Turner, 28, of Portage, drowned June 13 after helping his girlfriend to safety after she had been struggling in the water at Michigan City's Washington Park Beach, DNR officials said.

A national shortage of qualified lifeguards and budget restraints were factors in not hiring lifeguards at some of the south shore’s most popular beaches, Michigan City Park Superintend Ed Shinn said.

"Our goal is to educate these people," he said.

Shinn said he could not say for sure whether the recent water emergencies off the city's beach could have been avoided had he received enough qualified applications to follow through on plans to hire 17 lifeguards this summer.

"Each incident is different," he said.

Shinn said if the city could hire guards, the focus would be on Washington Park beach, where the recent water emergencies occurred.

The Indiana Dunes National Park in Northwest Indiana has long stretches of Lake Michigan shoreline but it only has lifeguards at West Beach, which is part of the national park footprint, according to Chief Ranger Rich Eshenaur.

Seven guards are on duty this summer along the section of beach immediately in front of the beach’s lakefront pavilion, he said.

"We didn't get a lot of them applying," Eshenaur said. "It is difficult to find lifeguards."

The park has been able to maintain the same level of guards as past years and guards a half mile of its three-mile shoreline, he said.

Northwest Indiana’s city of Whiting managed to hire 13 guards but could have made room for up to five more, Whiting Park Superintendent Adi Cruz said.

The city did not receive many applications and many did not have the necessary certifications, she said.

Wisconsin’s city of Kenosha has about eight miles of Lake Michigan shoreline, which hasn’t had active lifeguards at most of its beaches since 1998 and at Eichelman Park since 2001, said City Administrator John Morrissey.

“It was budgetary, and it was very difficult to find lifeguards,” Kenosha Parks Superintendent Jeff Warnock said.

There’s no public push currently in Kenosha for bringing back lifeguards despite Racine drownings.

In Kenosha, after a rash of drownings in 2018, including that of 17-year-old Indian Trail High School student Donovan Anderson, public concern led to the installation of six life rings at three key locations along the Kenosha shoreline. It also led to improved multilingual signs warning swimmers about potential dangers.

Three life rings can be found along the north pier (the location of the red lighthouse) of the Kenosha Harbor, where Anderson jumped from, one on the south pier and one on either side of the Pike River, where two people also drowned in 2018. According to Ben Andersen, a captain with the Somers Fire and Rescue Department and team leader for the Kenosha County Dive Team, these locations are among Kenosha’s riskiest.

However, Morrissey said that since the 2018 drownings, there’s “greater awareness” within the Kenosha Police Department about the pier, and officers often respond to calls about people jumping off the pier — especially the north one, which traditionally has attracted teens and preteens.

“Even to the point of throwing a basketball or whatever you have, it might be the thing that they are able to hold on to, to maintain enough energy to allow us (the dive team) to get out there,” said Nick Koldeway, Racine County Sheriff's Office Deputy and Dive Team Member.

Additionally, Kenosha Police squad cars are equipped with flotation throw bags, which were used in April to rescue a boy who fell in the harbor.

“That’s a 33% increase over the same date the previous year, and 2020 was the deadliest year on Lake Michigan. The increase in drowning statistics creates a lot of concern we’re heading for another record-breaking year for drownings on Lake Michigan.”

While guarded beaches can significantly reduce the chance of drownings, that is only part of the answer, Benjamin said. He pitches a more encompassing, three-fold approach made up of water safety, swimmer safety and safer responses.

"There is no silver bullet for water safety," Benjamin said.

Safer water and response include not just lifeguards, but also proper signage to clearly identify hazardous situations and conditions, he said. These also involve the availability of rescue equipment and proper training among anyone who may be involved in water rescues.

The safer swimmer element strives to put at least as much emphasis on educating young people about water safety as they are receiving about school shootings, which statistically pose far lesser threats, Benjamin said.

Anyone entering the beach waters should know the “Flip, Float, and Follow” Drowning Survival Strategy, he said. This involves a struggling swimmer flipping onto their back, floating to keep the head above water, keeping calm and conserving energy. It then involves following the safest path to safety and out of the water.

"As long as you are floating, you are alive and buying time for rescue to arrive," Benjamin said.

Like "Stop, Drop, and Roll," a simple fire safety technique taught to children as a component of fire safety week, "Flip, Float and Follow" can be an effective psychological tool to avoid panic in a terrifying situation, he said.

While much focus in recent years has revolved around rip currents in Lake Michigan, the rescue project provides information about other types of currents and water conditions that pose potential threats to swimmers as well.

Racine County has recorded 14 drownings in the past four years. In the first 11, none were attributed to rip currents. But rip currents were a factor in the three Racine beach deaths — of 14-year-old Lily Limbert, of Greendale, 17-year-old Yaadwinder Singh, of Franklin, and 10-year-old Eisha “Nahomy” Figuereo Colon, of Racine, according to a report from the Racine County Medical Examiner’s Office.

Nahomy just had finished fourth grade at Giese Elementary School in Racine and loved drawing, painting, music and playing the keyboard, according to the GoFundMe page set up for her family.

Officials have said it's practically impossible to be prepared for rip currents, which seemingly come out of nowhere.

High winds often strengthen those currents. On Thursday and Friday leading up to the Independence Day weekend, several beaches spanning Lake Michigan’s shores were closed because of predicted high winds that were expected to create life-threatening waves.

A couple weeks before Racine’s three fatal drownings, the area nearly had another. Bystanders were able to pull a struggling victim to safety.

But that is not always the outcome.

“The lake can change in the snap of a finger,” Craig said. “That flip of a switch is hard for people to understand. “If you see someone struggling, the worst thing you can do is go in after them.”

Craig said one of the key ways to reduce Lake Michigan drownings is education.

“When it comes to safety, everyone wants to have a fun summer,” Craig said. “But part of that is knowing the powers of the lake.”

Rip currents: What to do if you get caught and how to help someone who is

Rip currents are channeled currents of water flowing away from shore at surf beaches. If you get caught in one, here's how to break free. 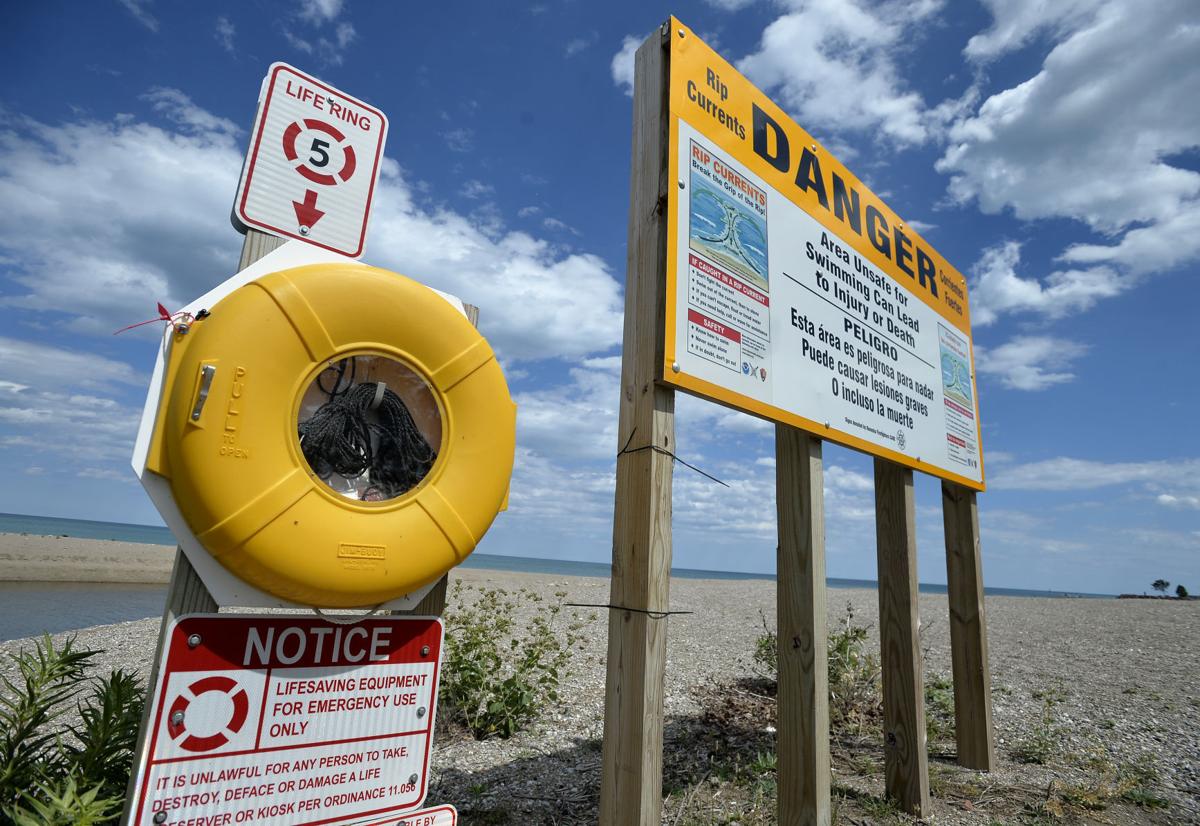 A life ring and sign warn beachgoers about the dangers of the water in Pennoyer Park near the mouth of the Pike River in Kenosha, where drownings and water rescues have occurred. 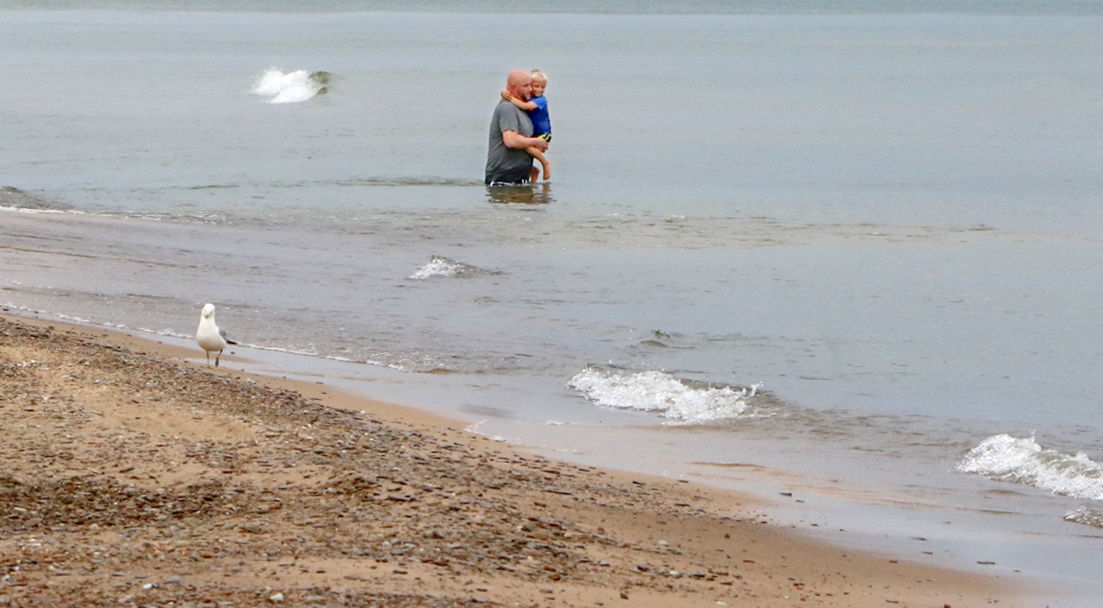 People enjoy the lake at Gary’s West Beach Indiana Dunes National park. The beach has four guards on week days and seven on the weekends. 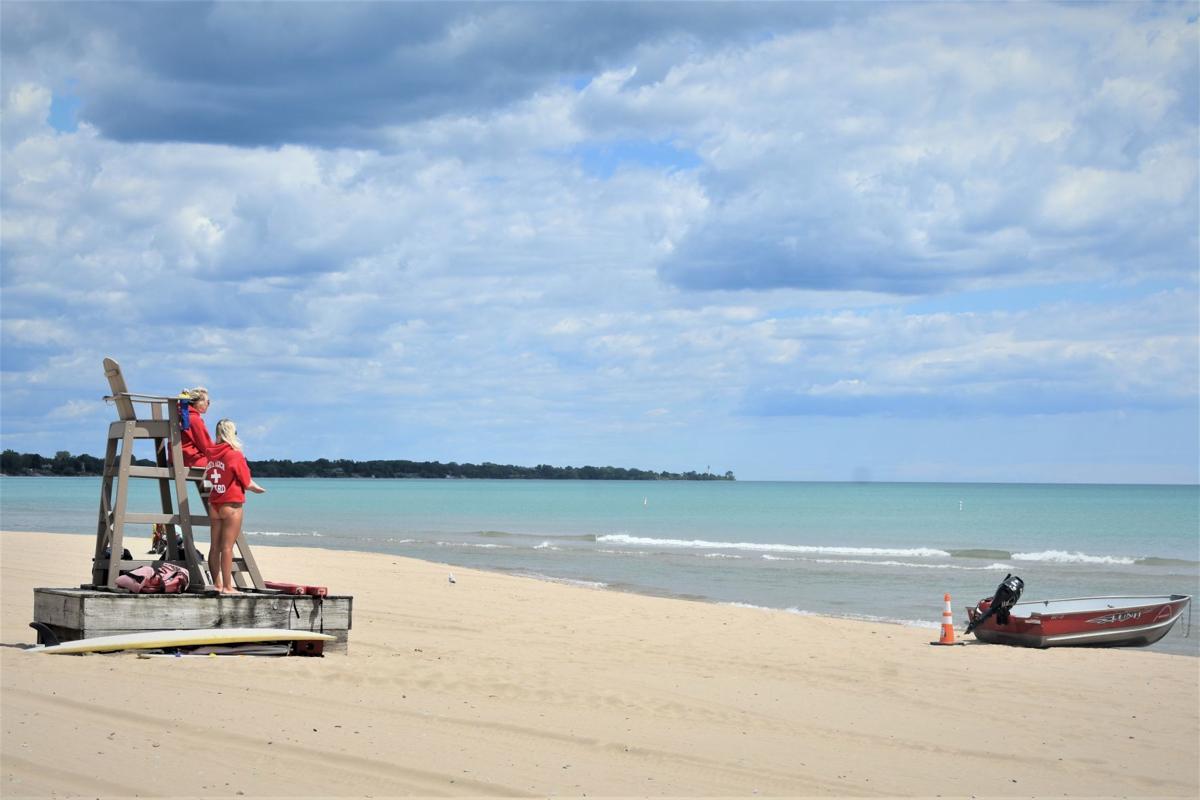 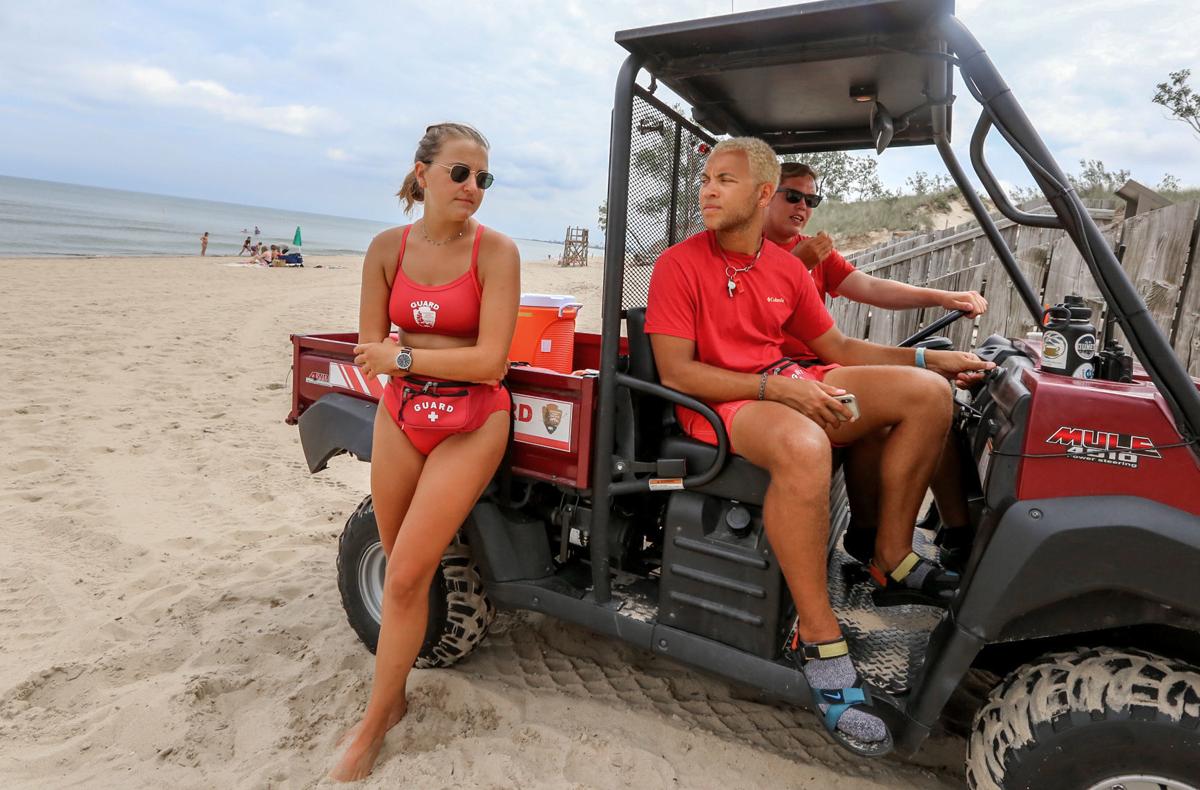 Lifeguards chat before starting their shift at Gary’s West Beach Indiana Dunes National park. The park has four guards during the week and seven on the weekend. 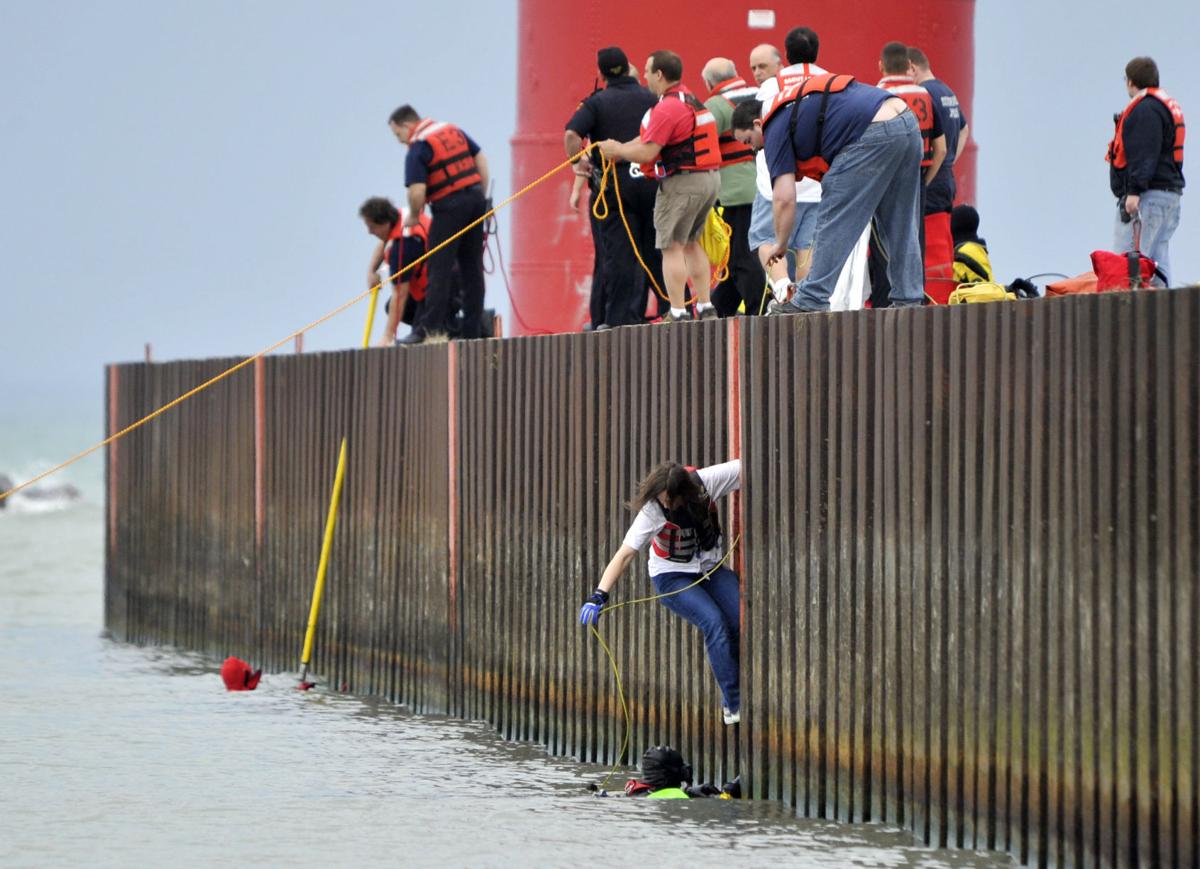 Rescue workers search for a 13-year-old girl who drowned near the North Pier on April 11, 2011. 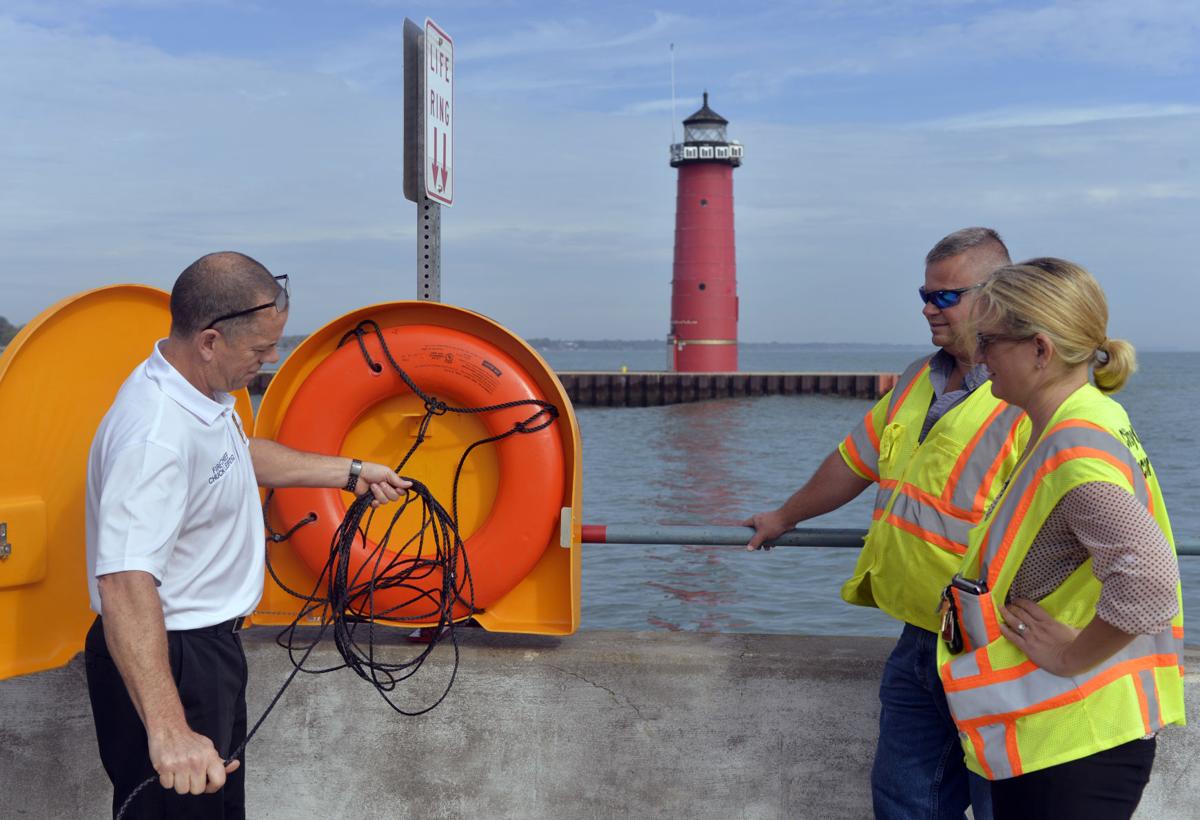 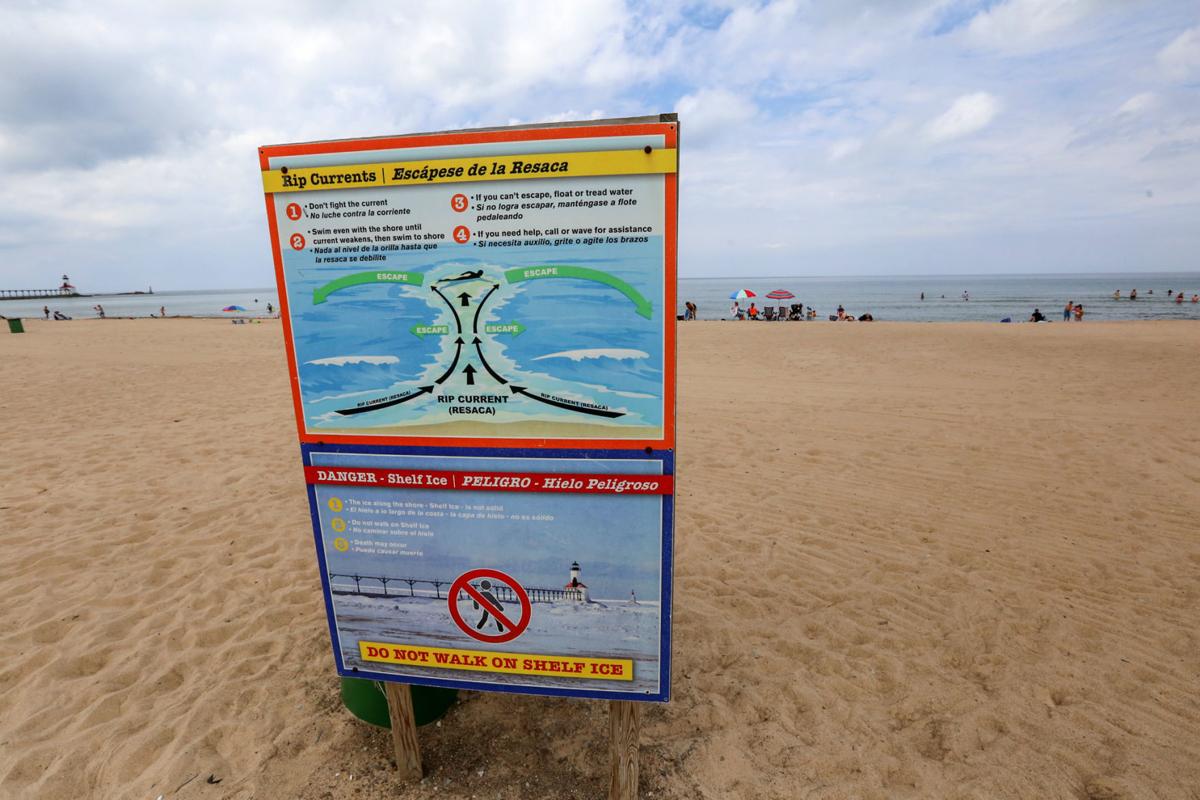 A sign at Michigan City’s Washington Park beach warns of rip currents with instructions for how to escape them. 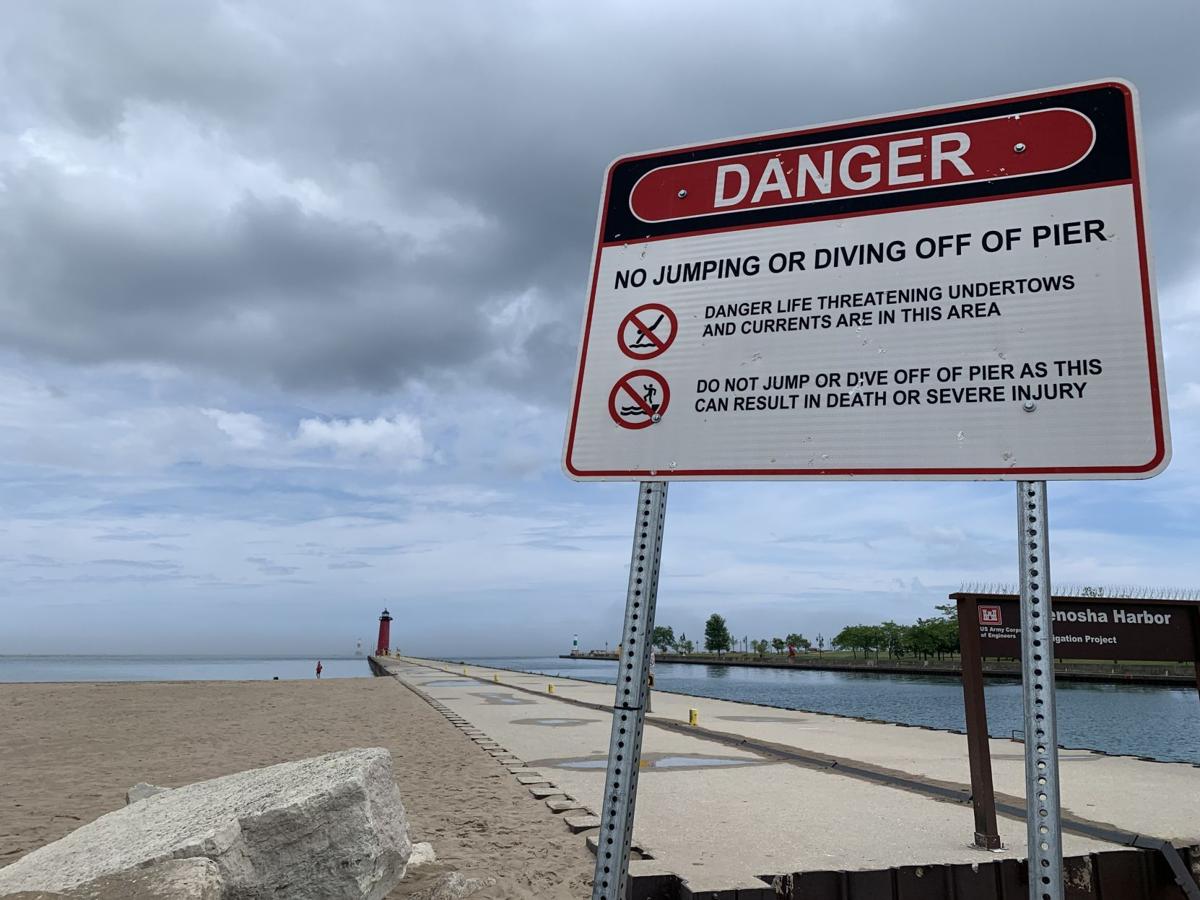 A warning sign at the start of Kenosha's North Pier. In 2018, an Indian Trail student drowned after jumping off the pier. The pier has also been the site of numerous water rescues over the years. Recent drownings in Racine, Wisconsin, and Michigan City, Indiana, have brought lake safety back into the public spotlight. 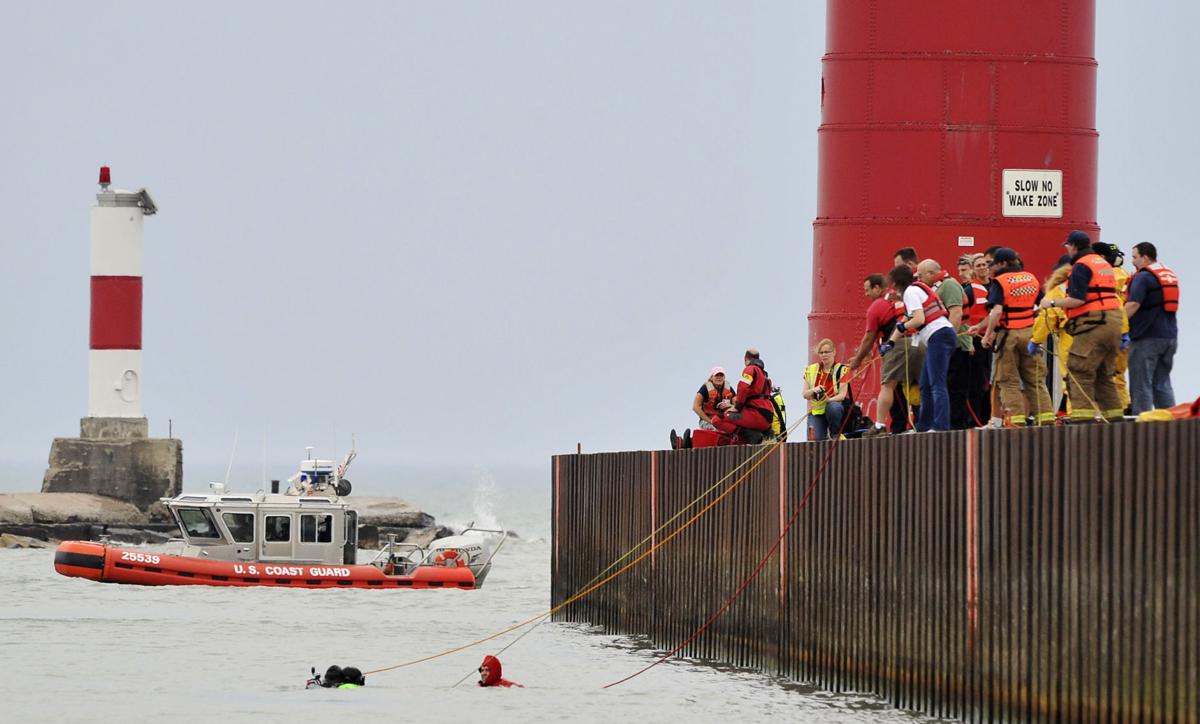 Rescue workers search for a 13-year-old girl who drowned in Lake Michigan near the North Pier in Kenosha on April 11, 2011. Officials say more education is needed after dozens have died this year from drowning in the Great Lakes, including several in Lake Michigan. 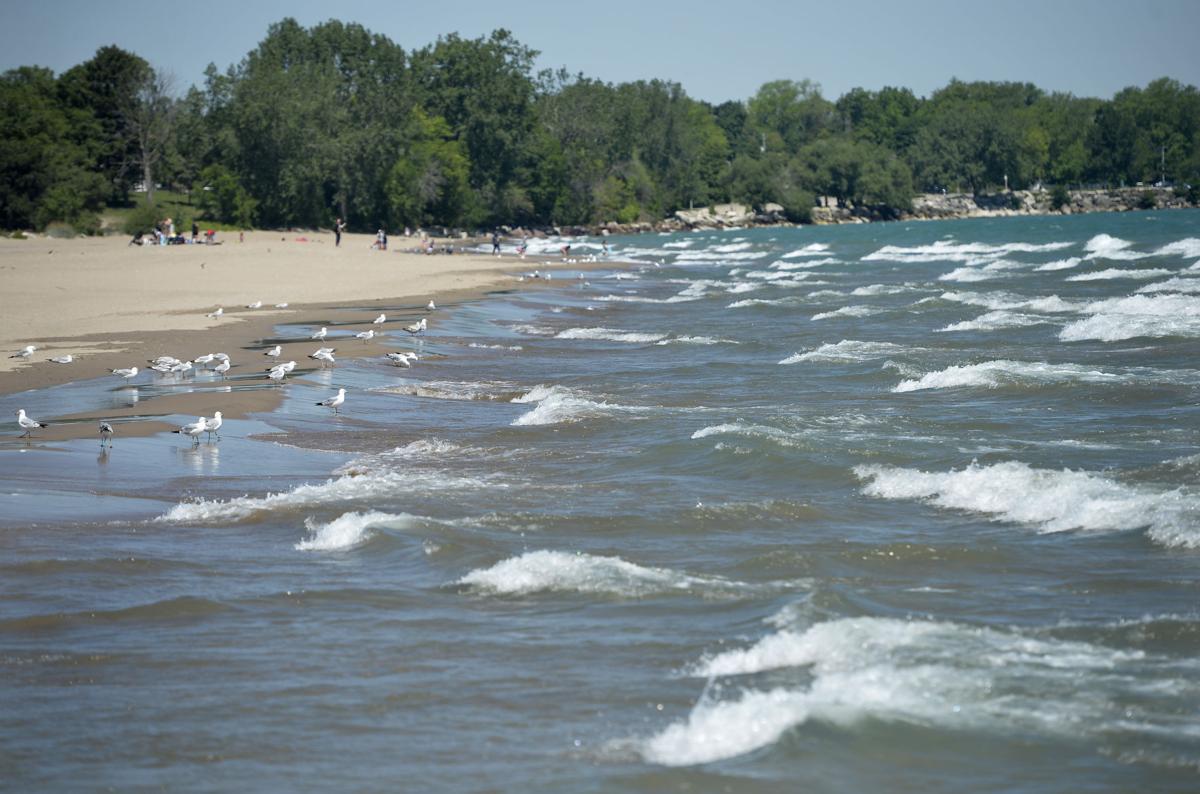 Waves crash against the shoreline on Simmons Island beach on Thursday, July 1, 2021.

Simmons Island on Lake Michigan in Kenosha is a popular stop for beachgoers. 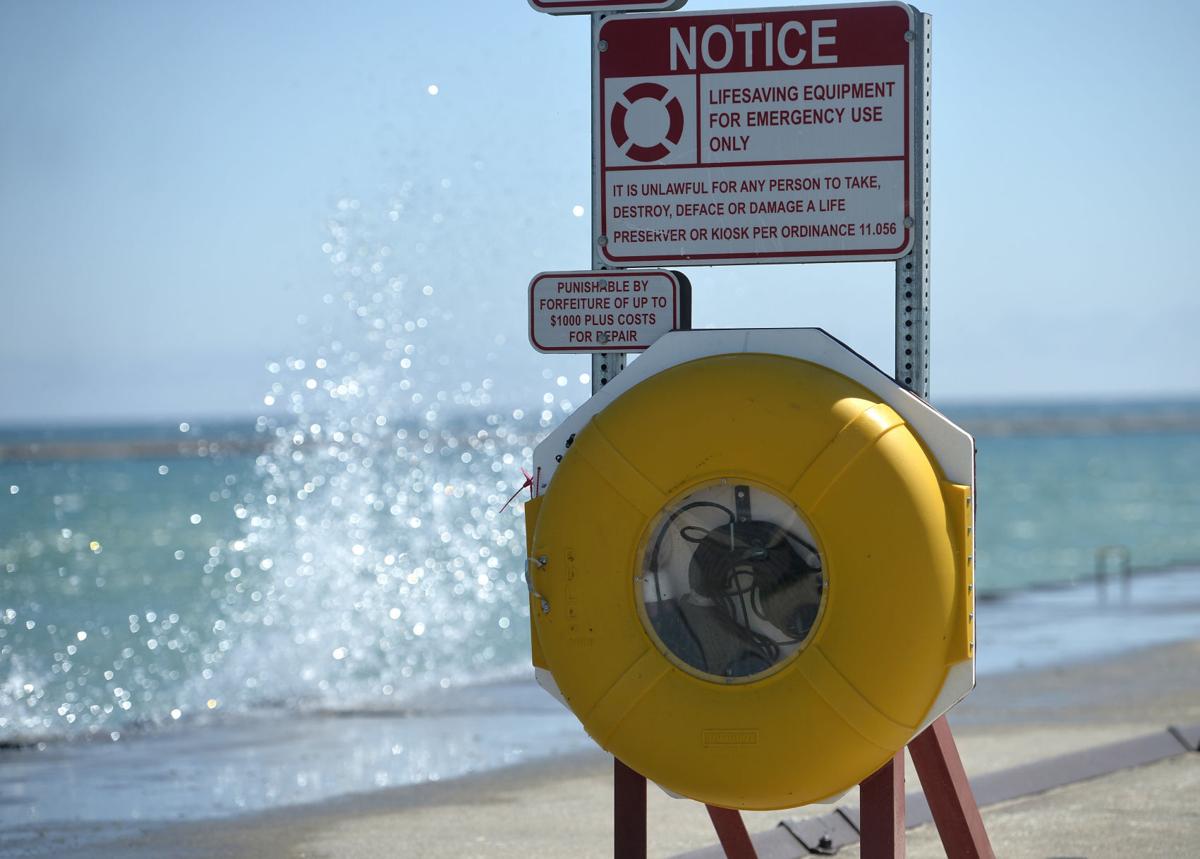 Life rings were installed in 2018 along the north pier along the Kenosha Harbor. 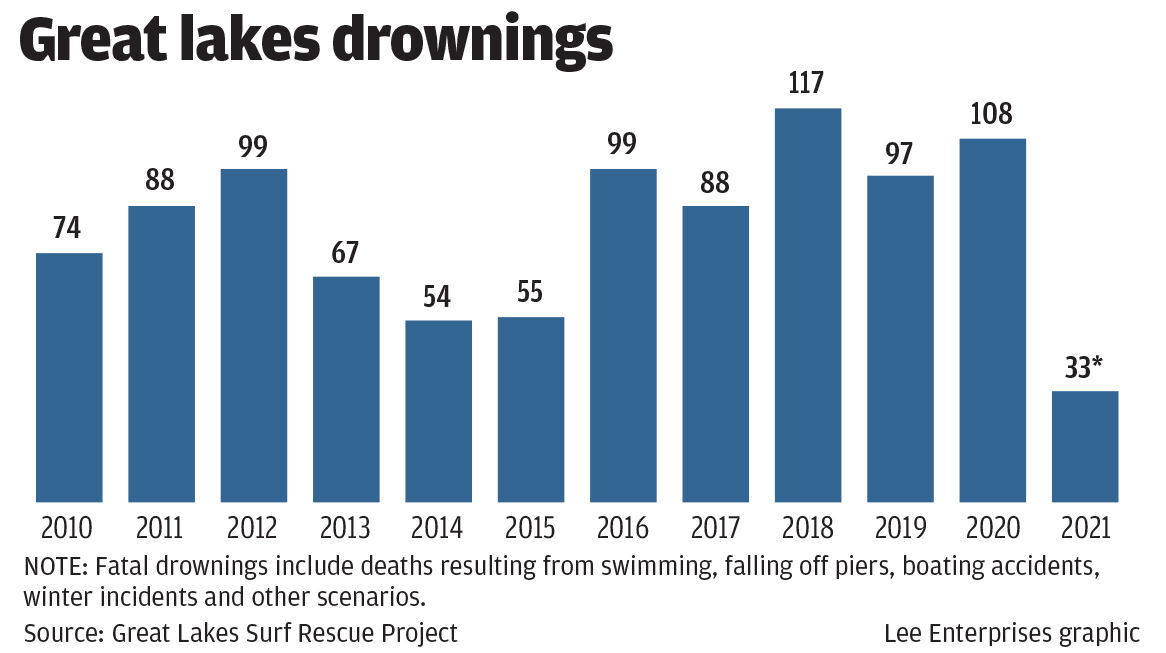 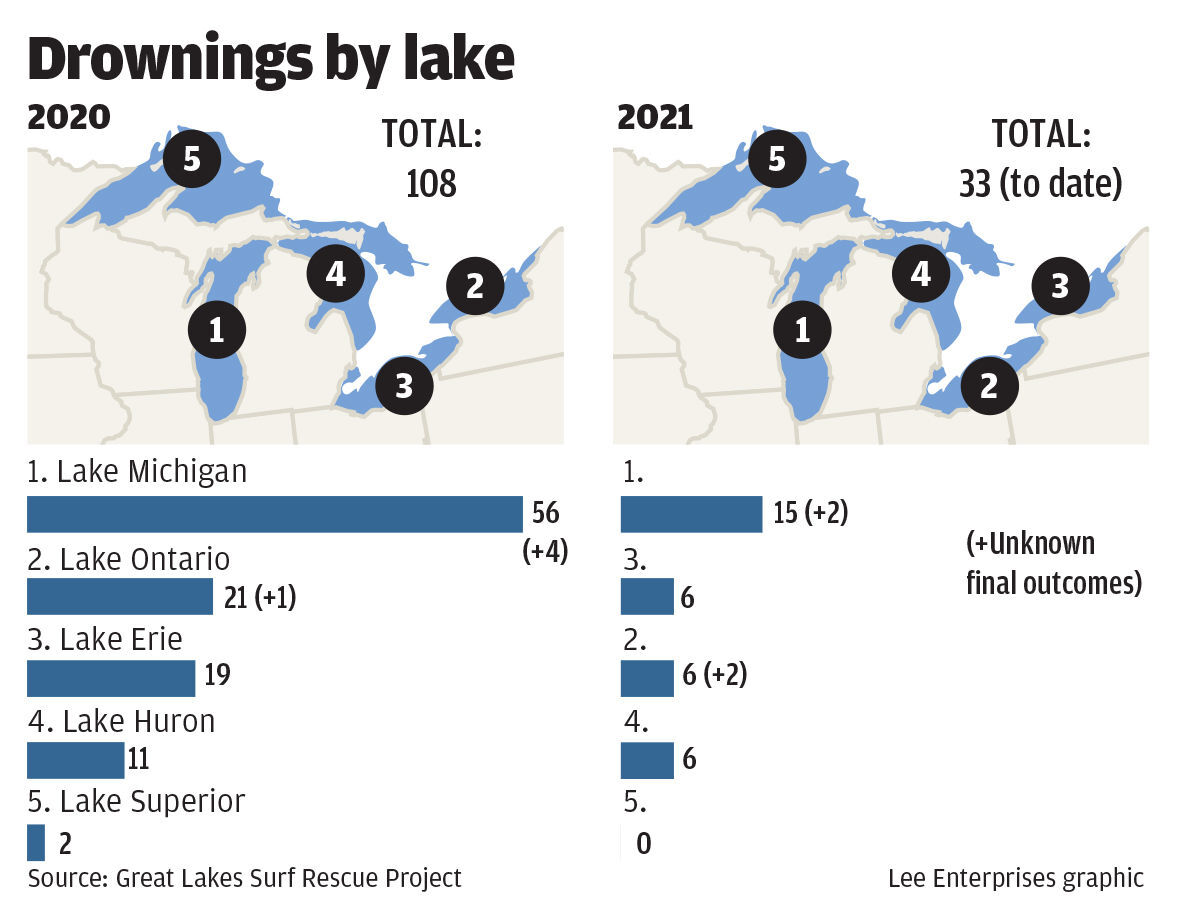 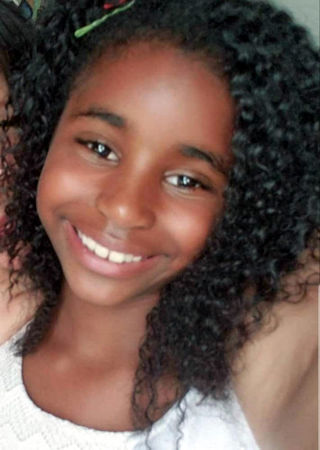 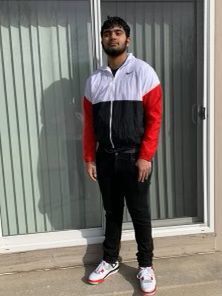 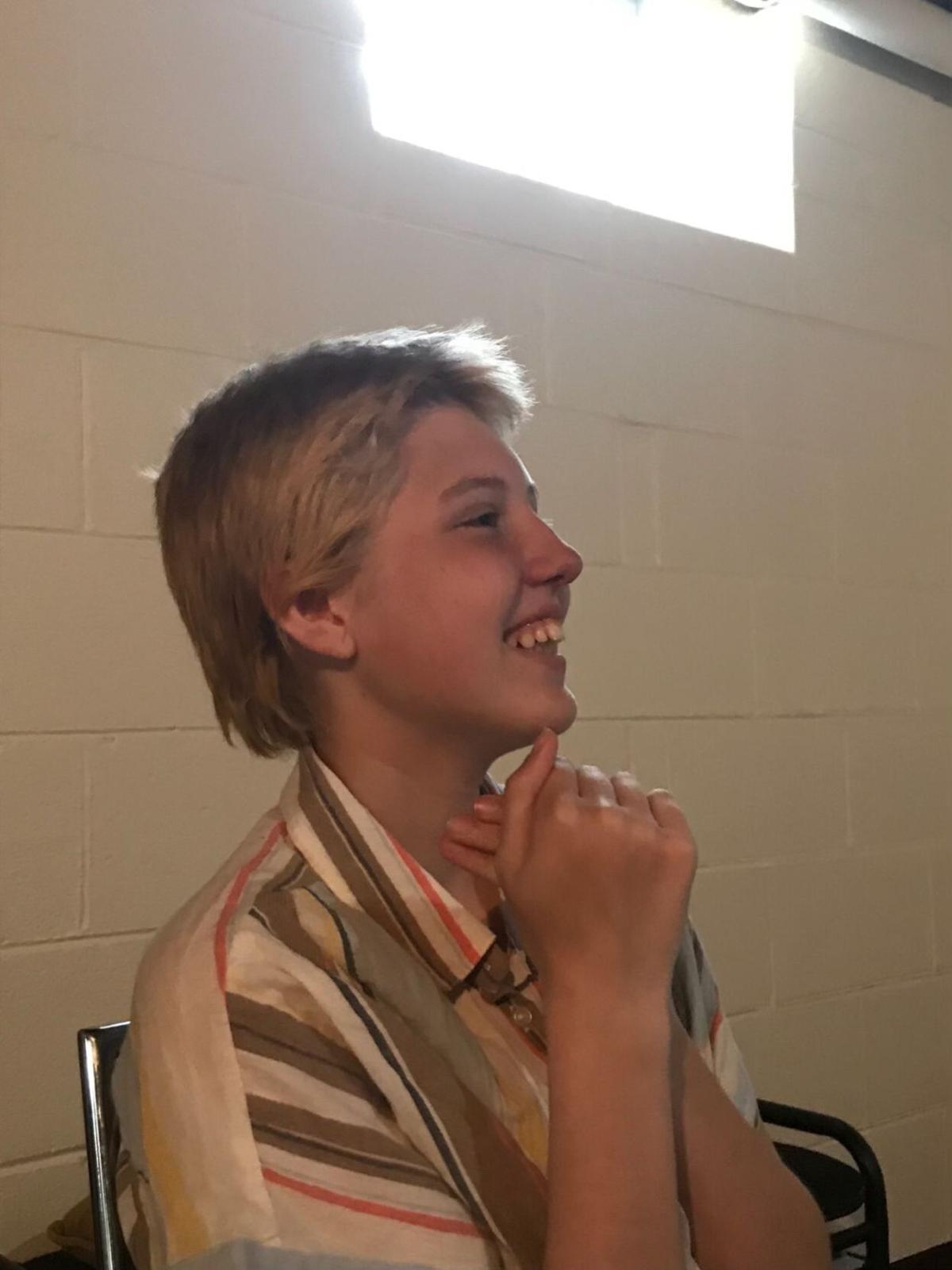