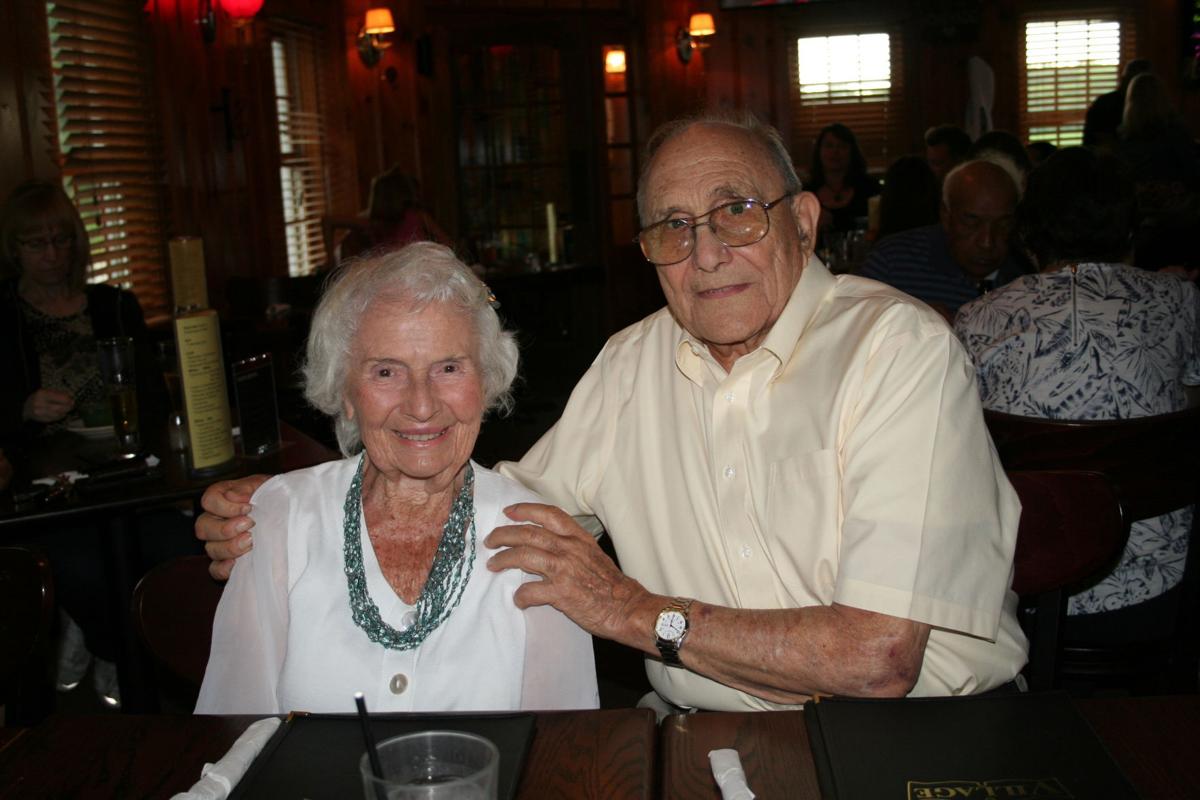 Jettie Rose and Bob Peterson, who celebrated his 96th birthday on July 14 with family at the Village Inn Supper Club in Pleasant Prairie.

Bob Peterson is shown in his workshop, where he builds bird houses. He also makes quilts for his great grandchildren.

CHRISTINE A. VERSTRAETE For The Kenosha News

Pleasant Prairie resident Alyssa Whitmore knows just how fortunate she is. After all, it’s not every day you get to help your grandfather celebrate his 96th birthday.

Speaking of her grandparents, the 35-year-old Whitmore said: “I think the millennial generation is used to an easy lifestyle. I just think their lives are so much more interesting.”

Consider that Bob Peterson has probably lived several lifetimes compared to most people.

He was married 60 years to his first wife, Josephine, and then moved back here after her death and living 25 years in Arizona. He got re-acquainted at church with a girl he knew in junior high school. “She was the most beautiful girl in my class,” he said.

“I thought it was good he came back as all our family was here,” said his wife Jettie Rose. The couple married on New Year’s Day 13 years ago when both were in their 80s. Between them, they now have four grandchildren and two great-grandchildren in Kenosha.

When Peterson grew up in nearby Zion, it was pretty much country living. He had farm animals, crops, and chores, though he didn’t technically live on a farm like his wife did. He worked hard even back then, trying to milk a recalcitrant cow or helping bring in the three city-blocks of crops. In eighth grade, “I used to ride my bike 13 miles to work at the filling station,” he recalled.

He lived through the Great Depression and joined the Navy in 1943 at age 18.

World War II took him on many trips overseas working on a troop transport ship, which he rather enjoyed.

“I expected it,” he said of being called up for the service. “I enjoyed it really. I went to quite a few interesting places. We stopped in England almost every time. That was very interesting. There’s so much history.”

Peterson still remembers much of his service time like his last assignment at the end of the war as part of the USS Monticello.

“We ran the ship back and forth to New York, I think four times,” he said. “They sent us to Germany to confiscate Germany’s best ship, the steamship Europa. I got to stay in Germany a couple months.”

After the war, Peterson established his own carpet business, but he never lost his love of travel: “I was able to take 17 cruises, mostly down the West Coast, but also to Alaska, Rio de Janeiro, and the Panama Canal.”

In later years, he also went on several missions trips to England, Egypt, Israel and South Africa with his church, Christ Community, in Zion. His last trip was in 1980.

That is just part of the older couple’s faith walk that continues to inspire them all, said Andrea Whitmore, Jettie Rose’s daughter and Alyssa’s mother.

“They are both very godly people,” she said. “Watching their walk is very inspiring.”

These days, Peterson is still busy. He continues to drive, and the couple like dining at local supper clubs, especially at some Kenosha County landmarks: House of Gerhard in Kenosha, Hob Nob in Somers and the Village Inn in Pleasant Prairie, where the family gathered to celebrate Bob’s birthday on July 14.

He’s made quilts for family members and is known for what son-in-law Randy Whitmore calls “exquisite” hand-made birdhouses, like the 32-room model built for his church. “They’re like bird hotels,” joked his granddaughter.

Having no one else in his family live so long, Peterson said he doesn’t know what led to his longevity. Maybe, like his wife who is 95, it’s due to how he grew up..

But he doesn’t mind: “It feels wonderful.”

'This is history': See all the memorable photos as fans erupt outside Fiserv Forum after Bucks win title

Jettie Rose and Bob Peterson, who celebrated his 96th birthday on July 14 with family at the Village Inn Supper Club in Pleasant Prairie.

Bob Peterson is shown in his workshop, where he builds bird houses. He also makes quilts for his great grandchildren.