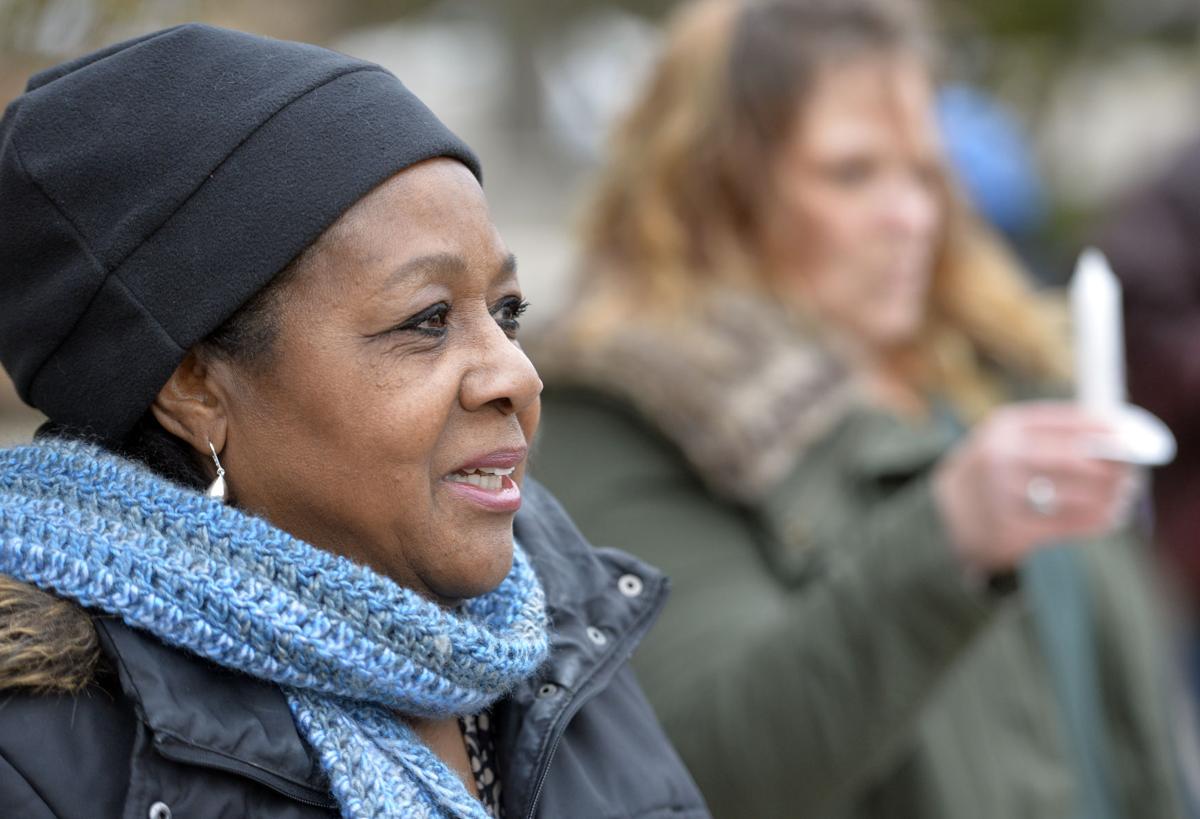 Jo Wynn leads a service for the local homeless community on the steps of the Simmons Library during National Homeless Persons Memorial Day in 2018. For her tireless community efforts Wynn has been recognized as the 2021 Kenosha News Person of the Year. 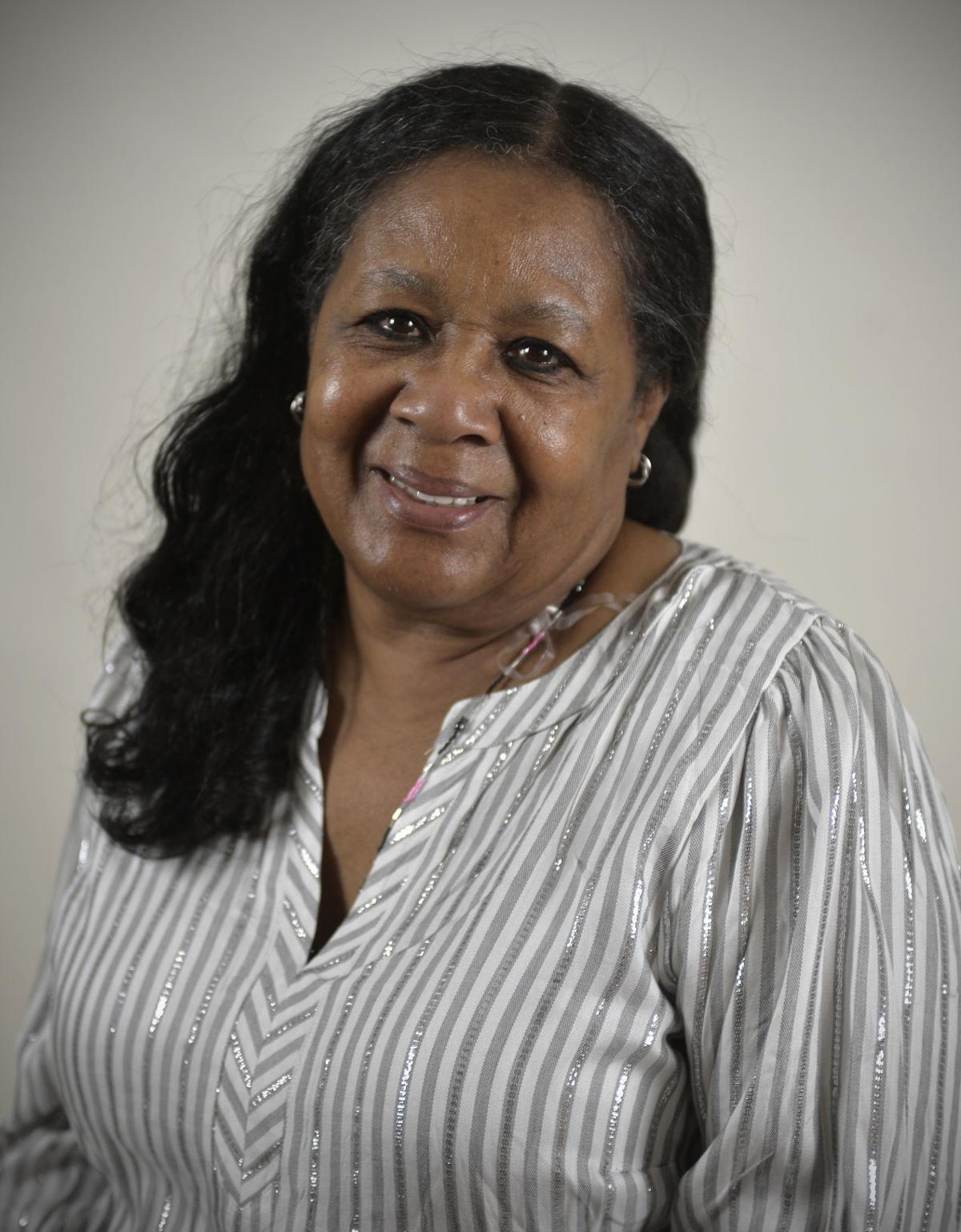 Jo Wynn, the Kenosha News Person of the Year 2021 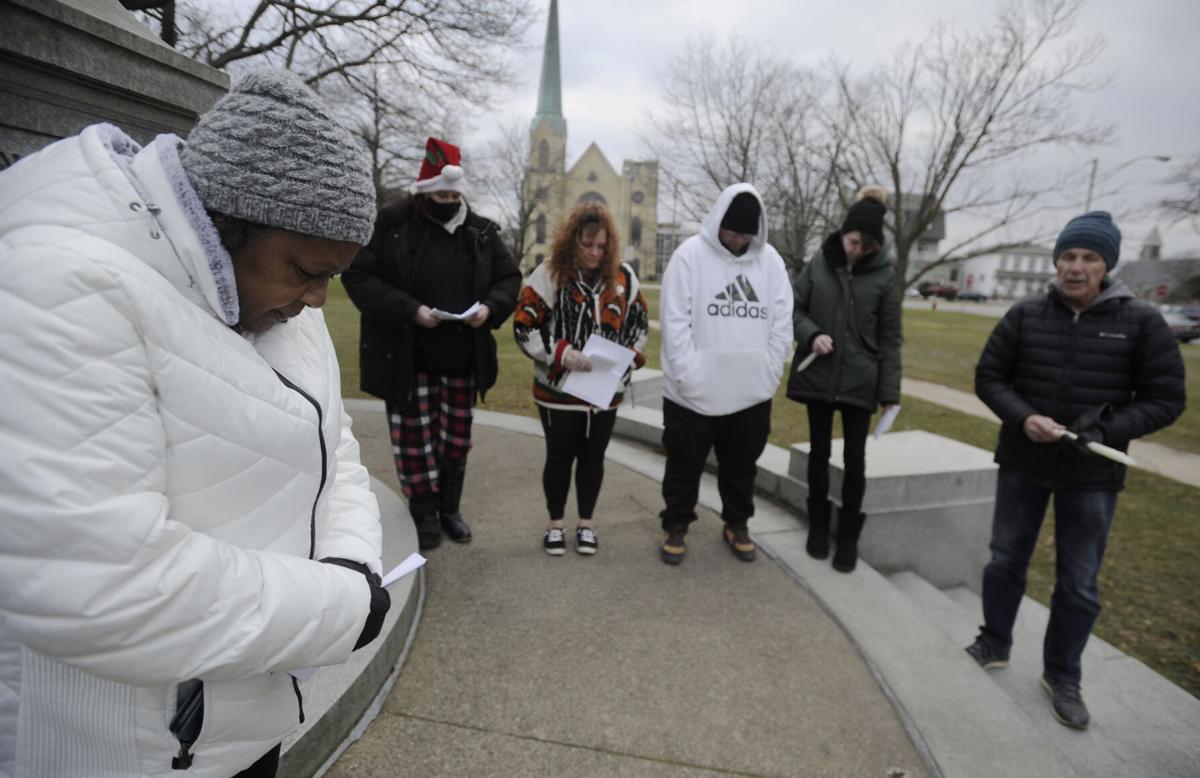 Eighteen years ago Jo Wynn was a 51-year-old woman with a tiny dog who just needed a roof over her head.

With persistence and some help from community leaders, Wynn soon found a home and a new start in Kenosha.

Today she is a champion for the underdogs in our community, from the homeless and veterans to grandparents raising their grandchildren.

In 2005 she founded Walkin’ in My Shoes, a not-for-profit street outreach project for homeless residents of Kenosha. WIMS currently has since established 10 resource programs covering a spectrum of community needs from community gardens to aftercare outreach for inmates.

Wynn also has aided other community helpers, including the founder of God’s Kitchen. “She helped me with getting my website and my name for God’s kitchen of Kenosha Inc.,” Arnetta Griffin said.

For her tireless community efforts Wynn has been recognized as the 2021 Kenosha News Person of the Year.

In the beginningNow 68, Wynn’s work on behalf of others began after she arrived in Kenosha from Arizona in 2003.

She had no cash and no place to sleep.

“I was pointed to the INNS program but didn’t want to sleep on a church basement floor,” she said.

The few offers of shelter she got evaporated when people learned she had a small dog, a toy Maltese named Isaiah. “I was told I could stay but he had to go,” she said.

After living on the streets for three days Wynn went to Mayor Antaramian’s office.

“I told him I was homeless and I had this little dog and couldn’t go anywhere without him,” Wynn said. “(The Mayor) made some calls on my behalf, but everywhere he called there was nothing set up for someone my age.”

Her next stop was to then-Rep. Paul Ryan’s office located in Downtown Kenosha.

There she found that her social security disability funds from Arizona had been inadvertently held up by red tape. That same day his staff helped her secure those funds.

“It made all the difference in the world,” she said.

Wynn used the money to rent a place where her dog would be welcome and began her life in Kenosha.

Dignity in a bag

Using her own experience, Wynn set out to provide outreach to others living on the streets.

She started by handing out backpacks filled with essentials that included a sleeping bag and called it the Survival Backpack Program.

To address the needs of persons in different circumstances, Wynn wrote a booklet of community resources and put that in the bag, too.

The booklet project took her about six months during which she ferreted out community resources specific to the needs of veterans, seniors, youth and people with HIV.

“When I put the program together I thought: ‘What can I do to bring the resources to the people?’ I put everything into that bag; it was the first step, it was dignity.”

Wynn said the Survival Backpack Program was inspired in part by her little dog. “I came up with the duffle bag idea because I had kept him with me in a bag.”

What she thought would be her only street outreach program turned out to be the first of many for Wynn.

As she learned of the stories of those on the streets Wynn discovered that shelter solutions require addressing a wide range of circumstances. These include homeless seniors, youth who have aged out of foster care and those with disabilities.

She filed for 501©3 status for the non-profit organization, and in 2005 Walkin’ in My Shoes was officially launched.

After running programs out of her house for several years, in 2009 she moved WIMS into office space at 2211 50th St.

Today the not-for-profit operation consists of Wynn, a seven-member volunteer board from Illinois and Kenosha, community volunteers, her adult children and grandchildren.

Wynn stresses that the office functions as a place to talk about benefits and resources and is not “a hangout center.”

Unlike other resource agencies, WIMS does not offer services. “The program was never set up for us to get people things,” she said. “It made our outreach a little different because we go out into the community looking for the homeless.”

Standing on their own two feet

Calling herself a “no nonsense” woman, Wynn has expectations of those she serves. “It goes back to that old school of ‘standing on your own two feet.’”

“There is a small percentage of those who just want to be out there, but I would say about 70% just want to start over. They want to get off the street and some just need some direction.”

In addition to formal WIMS programs Wynn goes the extra mile for those she meets.

Continuing to expand her reach and impact in the community, she recently become a paid contractor offering post-incarceration resource assistance to inmates at the Kenosha County Detention Center.

The paid position started with volunteer work bringing Survival Backpacks to inmates identified as homeless and grew to include all inmates.

In her role of Aftercare Specialist, Wynn has one-on-one conversations in which she assesses inmates’ needs upon release. “I always ask them to set goals and connect them with the Job Center.,” she explained.

She also helps facilitate the return of children placed in foster care to their mothers. “This has become my true passion, working with the incarcerated population,” Wynn said.

Wynn has also stepped up to assist veterans encountered during her street outreach.

Her latest project is Bunker’s Coffeehouse for Vets. Slated to open the first Saturday in April, in WIMS office space, the coffeehouse will offer socialization as well as a place for veterans to find assistance resources, Wynn said.

“It was an idea in the works before I became involved,” she said. “It’s about veterans helping veterans. I’ll set it up then step away,” she said.

What makes her effective

“I like to get into the soul of a person. You have to understand an individual before you can help them. So I just provide a listening ear to find out what I can do to help them accomplish their goals,” Wynn explained.

Wynn’s “best day” is when she finds out that someone she’s helped is now in the community helping others.

When contacted about being named Person of the Year, Wynn exclaimed, “Oh my — I thought (the award) was just for entrepreneurs! For 16 years I just worked to help others.”

Programs offered by Walkin in My Shoes

Previous award winners for Kenosha News Person of the Year

WOMAN OF THE YEAR

Quotes from others about Jo Wynn

It is not difficult to find people who will sing the praise of Jo Wynn, including others who have been recognized at Person of the Year by the…

Jo Wynn leads a service for the local homeless community on the steps of the Simmons Library during National Homeless Persons Memorial Day in 2018. For her tireless community efforts Wynn has been recognized as the 2021 Kenosha News Person of the Year.

Jo Wynn, the Kenosha News Person of the Year 2021