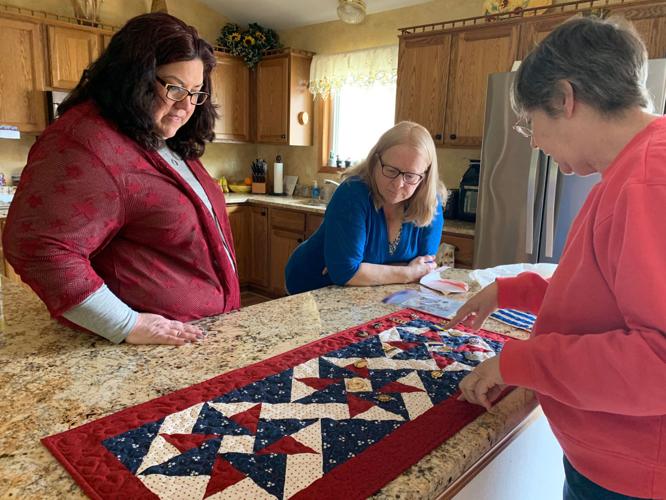 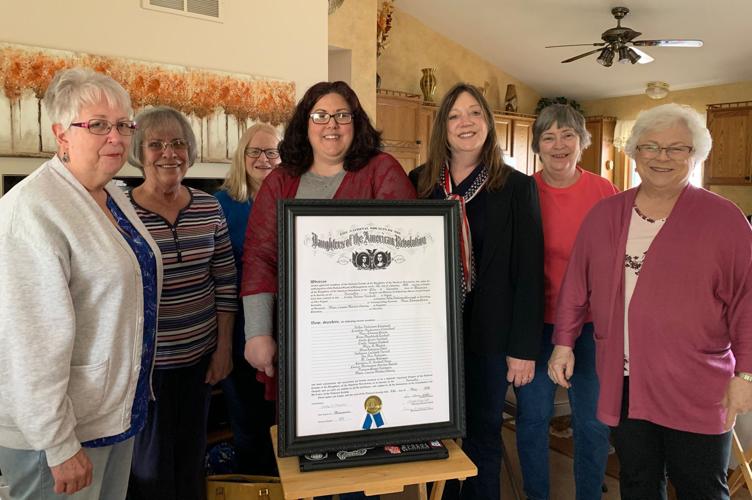 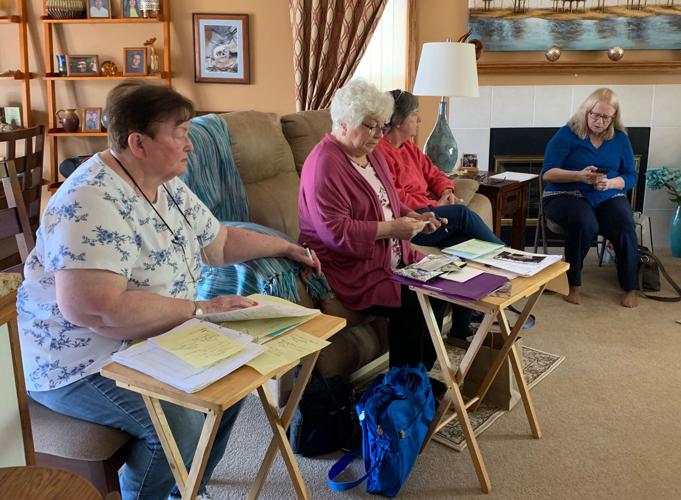 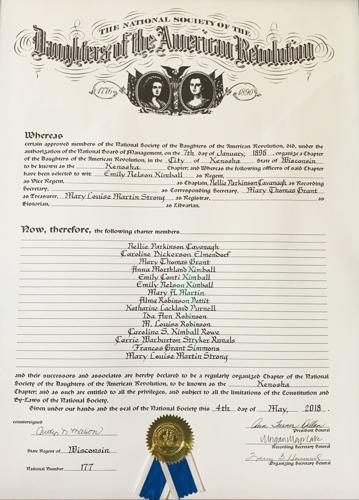 A reproduction of the 1896 charter for the DAR Kenosha Chapter. When the original copy could not be located, member Judy Flood had a new one created through the National Society Daughters of the American Revolution, complete with re-written signatures of the founding members. 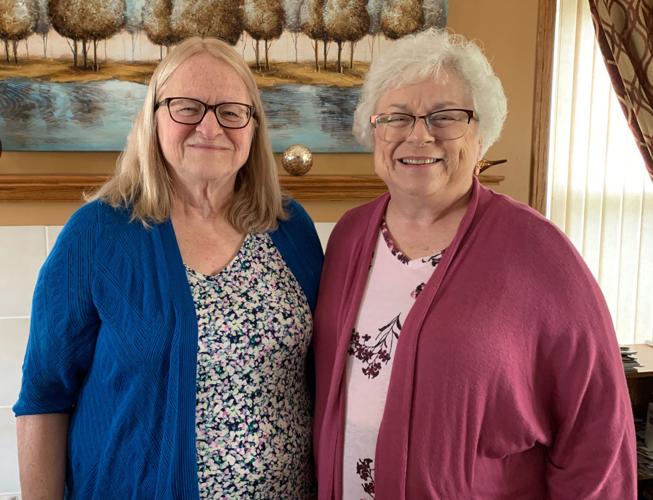 Sisters Barbara West and Sharon Moscicki joined the Kenosha Chapter of the DAR after a cousin of their mother’s traced the family to Revolutionary War patriot Asa Wheeler. 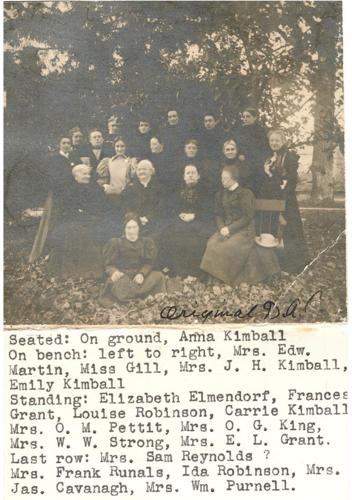 A photo of the original members of the Kenosha DAR appeared in the program for the organization's 125th anniversary.

A little over a decade ago Kenosha resident Debra Ogle Barton tracked her family tree to American Revolution.

There she found distant relative Hugh Montgomery who fought in the Revolutionary War and later in the Battle of King’s Mountain during the War of 1812.

Rosalie Bronson of Salem discovered a patriot ancestor who "navigated major rivers to get to and defend the western front" (modern day Illinois) during the Revolutionary War.

For these women, intriguing puzzles of genealogy have connected them and their families to deciding moments in the history of our country.

Both are members of the Kenosha Chapter of the Daughters of the American Revolution, an organization whose members can trace their family tree to the military confrontation between Britain and its colonies.

Kenosha Chapter Treasurer Sharon Moscicki describes the DAR as “a service organization based on committees from the national to the local level.”

Women seeking DAR status must be able to prove lineage to a patriot who served sometime between the Battle of Lexington (April, 1775) and November 1783 when the British withdrew its troops from New York.

A report from a June 1935 edition of the Kenosha Evening News noted that the Kenosha Chapter of the DAR was organized Jan. 7, 1896. Mrs. J.H. Kimball was the first regent of the organization. In 1935 membership stood at 65.

Currently the Kenosha DAR has 53 members; some residing in Kenosha and the immediate area, others living elsewhere in the country. Until April of last year when its meetings went online, the group gathered monthly at the Kemper Center.

The national and local DARs are not just a clubs for those who can trace their lineage back to soldiers of Revolutionary War, but are groups dedicated to patriotism itself. Regular meetings start with the Pledge of Allegiance, the Preamble to the U.S. Constitution and America’s Creed, Moscicki said.

DAR chapters annually bestow Good Citizenship Awards to high school seniors who demonstrate good citizenship qualities of dependability, service, leadership and patriotism in their homes, schools and communities. These students are selected by their teachers who feel they embody these characteristics.

Other civic-minded endeavors include the placement of commemorative historic markers throughout the community.

To celebrate its 125th anniversary, the Kenosha DAR held an in-person luncheon at the Kemper Center.

In preparation for the celebration, Kenosha DAR regent Rosalie Bronson wrote a booklet with short biographies on some of the chapter’s charter members including Katherine Purnell, Emily Kimball and Mary Louise Strong.

“The amazing thing about doing research on the founding members is that it’s a a ‘Who’s Who’ of prominent families from our area,” Bronson said.

Bronson became a member after tracing family to a relative, David Pagan, from her father’s side. “He had guarded the western front in Illinois because at the time they thought the British might come down from Canada and would attack from the west,” she said.

During a meeting to finalize details for the gala celebration, member Judy Flood presented the group with a reproduction of the Kenosha DAR chapter’s 1896 charter. The original had been lost over time but Flood was able to request a copy from the National Society of the DAR. The document was reconstructed using application papers on file with a professional calligrapher signing their names, Flood said.

Another member, Jacqueline O’Connell, shared a collection of medals and honorary pins given to the Kenosha DAR from the estate of Marilynn Baxter, a 50-year chapter member, who died in 2018. "She was a member extraordinaire," Moscicki said.

For most, DAR membership is a family affair. Once a patriot has been verified through a extensive process of documentation, it is not unusual for several living female family members to join the DAR.

Moscicki and her sister Barbara West became members of the Kenosha DAR after a cousin of their mother’s traced their lineage to a man named Asa Wheeler who fought on Concord Bridge. Since the discovery, Sharon’s daughter and granddaughter have also become DAR members.

Barton said she is the first one in her family to have searched for a Revolutionary War patriot. After finding their ancestor, two of her sisters and some cousins also joined DAR chapters.

Barton says she appreciated the help with tracing her patriot from both the local chapter and National Society of the DAR.

“I saw an ad in the paper announcing a DAR event at the Civil War museum and just showed up. I didn’t know my patriot yet but women there saw my family tree and worked with me.” Her journey took her to DAR headquarters where they help her find her link.

The national DAR can assist with the process by looking up military records,” affirmed Moscicki. “Census records are also very helpful.”

As would be expected by a group committed to history, the history of the Kenosha Chapter of the DAR is well documented. About 10 years ago, the group turned over its collection of original documents, newspaper clippings and memorabilia to the University of Wisconsin-Parkside for professional archiving.

“(Belonging to the DAR) makes history much more interesting,” Moscicki said. “I didn’t care too much about history in high school, but I sure learned a lot by tracing family patriots.”

Barton said she enjoys the “food, fellowship and friendship of the Kenosha DAR. “I love what we do, especially the patriotic things like volunteering to help veterans.”

Out of the past

From the Kenosha Evening News, Dec. 6, 1921: “A display of Revolutionary War heirlooms sparked discussion of the possibility of a ‘permanent exhibit’ at a regular meeting of the (Daughters of the American Revolution) held at the Elks’ Club, Kenosha. At the time a member of the County Board proposed that such as display might be housed in the Court House … It was discussed that Revolutionary War and other war relics might one day grow into ‘an excellent museum.’”

DAR historical markers can be found in several places in Kenosha

As a service organization interested in the preservation of history, during the past 125 years the Kenosha Daughters of the American Revolutio…

White House hits back at inflation criticism from Jeff Bezos

White House hits back at inflation criticism from Jeff Bezos

A reproduction of the 1896 charter for the DAR Kenosha Chapter. When the original copy could not be located, member Judy Flood had a new one created through the National Society Daughters of the American Revolution, complete with re-written signatures of the founding members.

Sisters Barbara West and Sharon Moscicki joined the Kenosha Chapter of the DAR after a cousin of their mother’s traced the family to Revolutionary War patriot Asa Wheeler.

A photo of the original members of the Kenosha DAR appeared in the program for the organization's 125th anniversary. 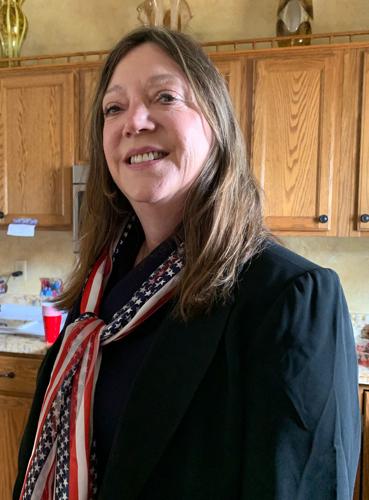