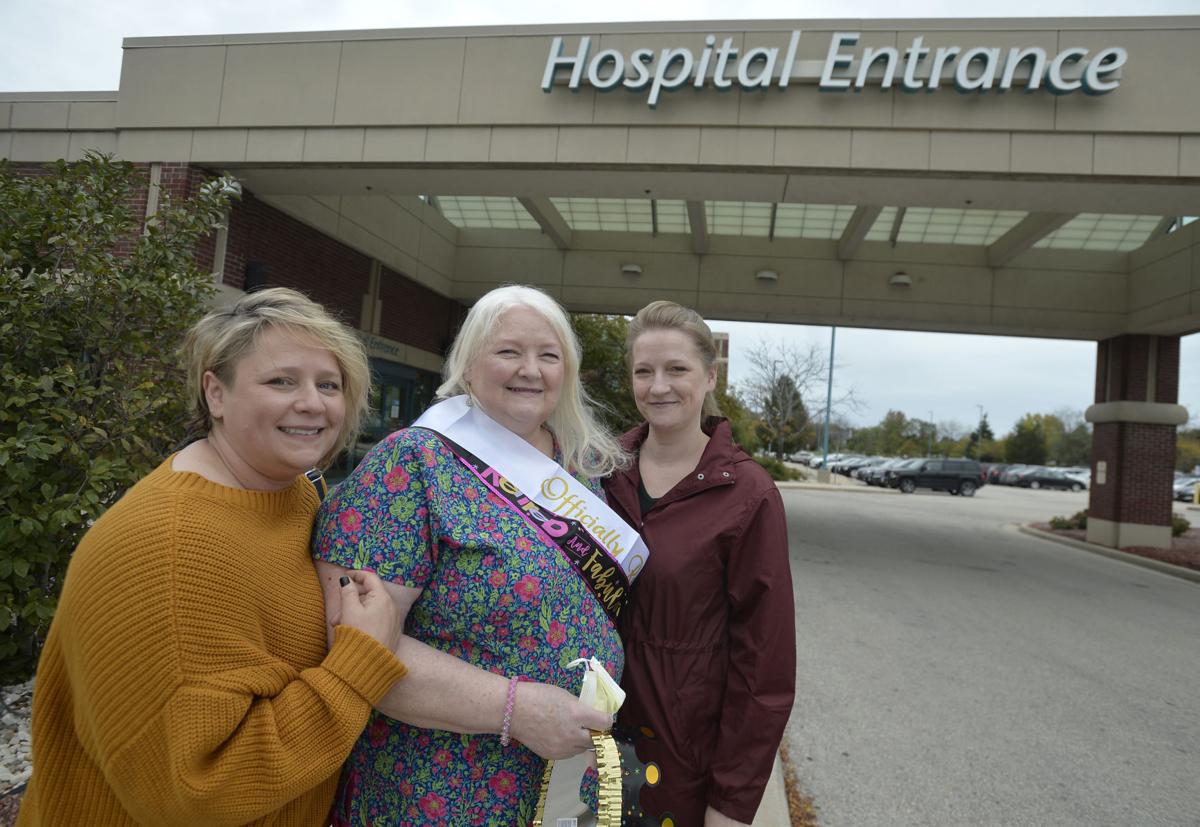 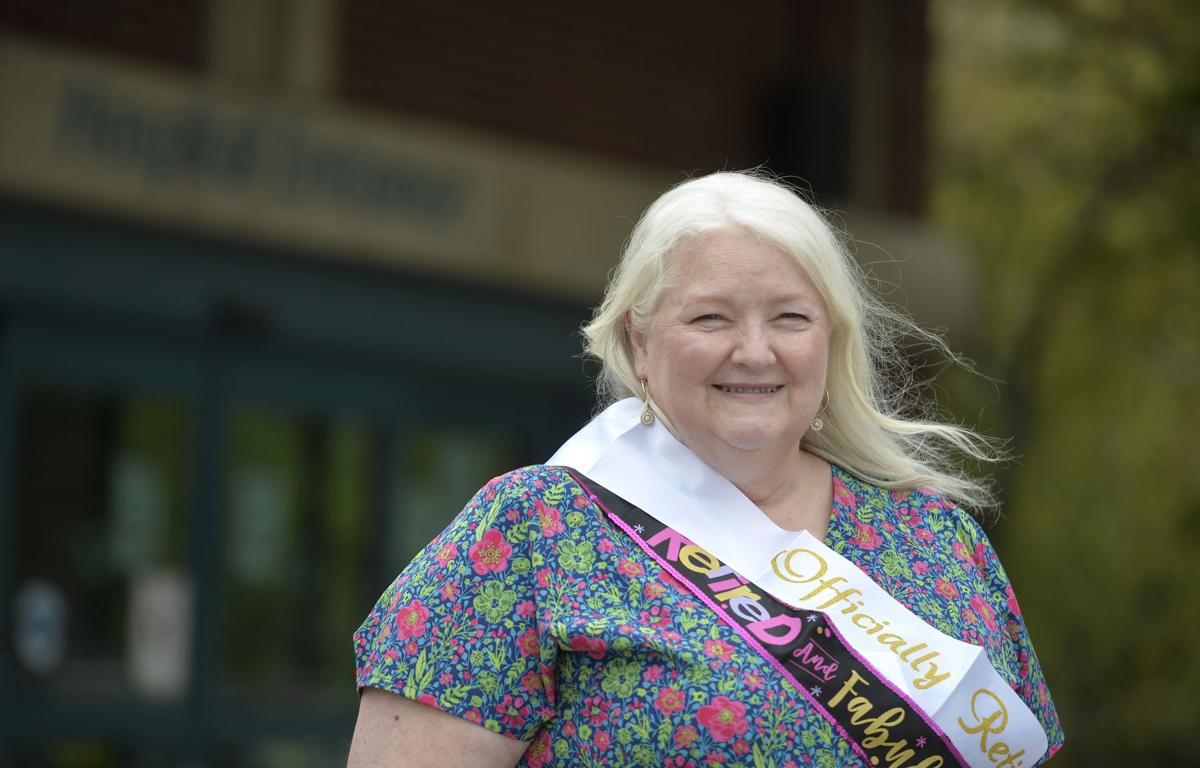 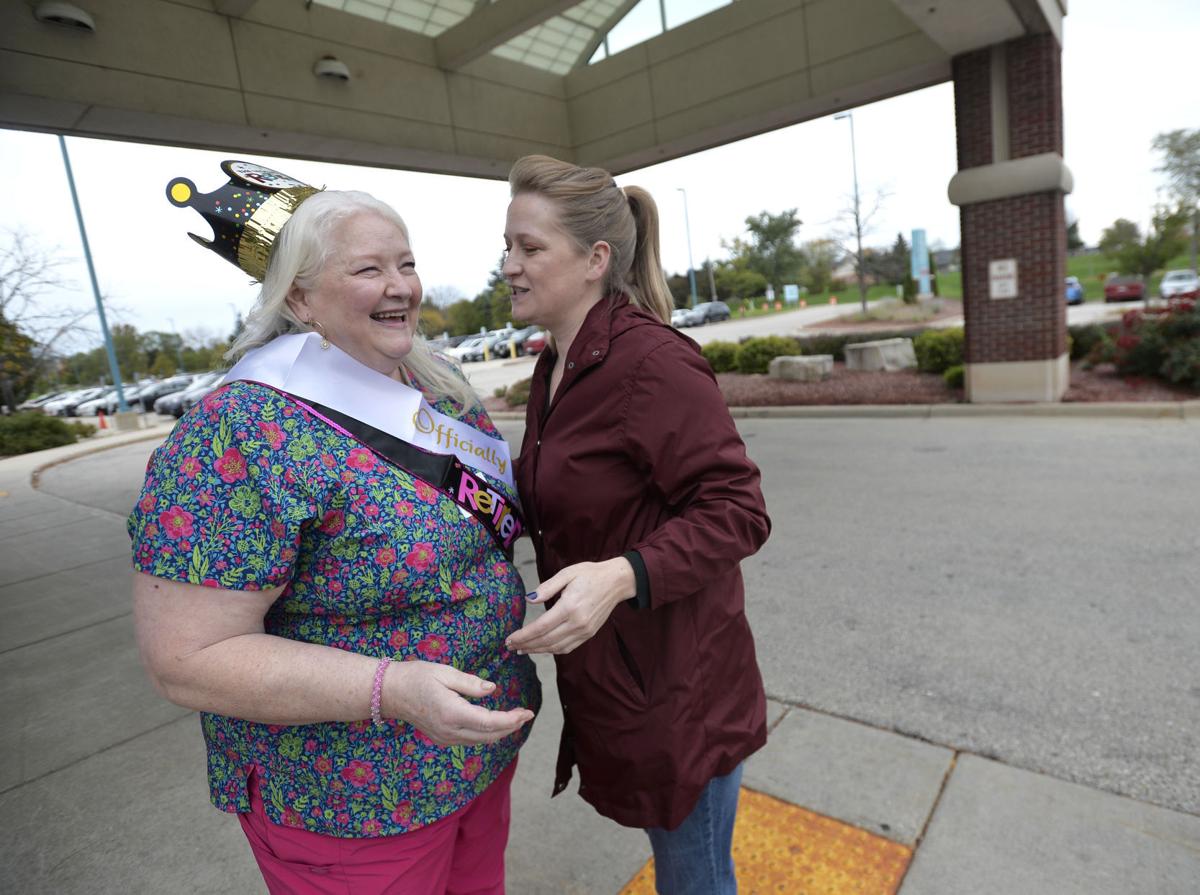 Laurie Channell, left, is greeted by her daughter, Kim, at Aurora Medical Center–Kenosha on her last day working as a nurse on Thursday. Channell is retiring after a nursing career of 48 years.

Nearly 50 years ago when she became a nurse, Laurie Channell’s uniform consisted of a white dress, white hosiery and a little white hat. Her hair had be worn “off the collar.”

Last week she stopped by the Kenosha News office to chat about her long career sporting bright floral-patterned scrubs with a pink ribbon tying back her medium-length hair.

“These are my happy clothes!” she said cheerily.

Channell wrapped up a 48-year career in nursing Thursday, retiring from The Diagnostic Treatment Center at Aurora Medical Center — Kenosha.

Reflecting on her tenure in the field, she said, “I think I’ve always loved (nursing), even though no one in my family was in the medical field.”

Channell’s interest in nursing began when she was in high school in Antioch, Ill., volunteering as a candy striper at the Great Lakes Naval Station.

Finding she liked the field, Channell took courses to become a nursing assistant at Victory Memorial Hospital (now Vista Medical Center) in Waukegan. She then obtained a nurses associate degree from the College of Lake County followed by a bachelor’s degree in nursing from Barat College in Lake Forest, Ill.

“My first job was great. It was in the OB department at Victory Hospital. I was 16, feeding babies and giving them their first baths. I loved that.”

Many of her four-plus-decades in nursing were spent in various departments at Victory. “I’ve been in medical-surgical, infection control, pediatrics and home health.”

For 12 years she worked as an office nurse in a clinic in Zion, Ill.

In 2006 Channell and her husband moved to Kenosha, where she helped set up the outpatient infusion department at Aurora Medical Center.

The Diagnostic Treatment Center administers intravenous medications and blood transfusions. In addition to performing these procedures, Channell has trained new nurses for the department.

“The department has grown a lot,” she said. “When I started it was just a couple of recliners in a corner of the same-day surgery area.”

Of all her nursing assignments, Channell says the Diagnostic Treatment Center has been her favorite.

Asked what she likes best about it, she said, “I just like the skill it takes. Nurses love veins and we really have honed our skills,” she said.

Over the years she says she has seen changes in many areas but particularly in “policy, medications and paperwork.” Reflectively, she added, “But nursing is all about change and how you do things.”

The ban on smoking has been one of the best changes she’s seen. “Back in the day everybody on staff smoked. There were ashtrays everywhere and a blue haze in the air.”

Another positive shift has been the inclusion of nurses in the inner workings of hospitals, notes Channell. “Today nurses have more say. We collaborate with doctors and our superiors really want our input.”

Although she likes her “happy clothes” Channell says she was actually disappointed when they switched from all-white uniforms.

Channell cites “going from paper to computer” as one of the most challenging aspects of her career. “The documentation takes so much time and takes you away from the patient.”

COVID has also presented stressors. “Our department administered monoclonal antibodies to COVID patients. We wore N-95 masks and isolation gowns and it was all very scary.”

Asked what has kept her going she said, “I enjoyed what I was doing and felt I was making an impact on my patients’ lives.”

Channell’s career has also made an impact on her family.

Daughter Kimberly Gonyo is currently a travelling nurse for Froedtert Hospital, Wauwatosa. Daughter Carie Johnson is a nursing instructor at Herzing University. One of Channell’s grand-daughters is currently studying to be a nurse.

“I don’t think I realized how hard my mother worked until I got into nursing myself,” Gonyo said.

“She is compassionate to her patients, devoted to her family and she’s a great friend,” says co-worker Liliana Perez-Rios. “The nursing world will miss her but we are glad to hear she will now focus on herself.”

Asked why she’s retiring now, Channell said, “It just like it was a good time to hang it up.”

The next stage will be anything but boring for this nurse. “I have lots of things to do, from visiting family to getting to tubs of sewing and crafting supplies.”

Channell’s extensive hobby list includes embroidery, quilting, gardening, making apple cider vinegar and grinding her own wheat to make bread. She also dabbles in small carpentry projects. “I love to use a saw and a hammer and pound things,” she said.

“My mom is the original homesteader,” Gonyo said. “I’m ready to see what (her retirement) looks like!”

Outside interests helped offset work stress, Channell said. “Doing these things helped keep my sanity and rejuvenated me. No matter how stressed I got I could always find ways to dissipate that energy.”

And there’s more to come, she said. “I also want to learn watercolor painting and macramé. There’s so much to learn!”

A leaked list of "Dangerous Individuals and Organizations" banned by Facebook includes three that mention Kenosha by name and five that include Wisconsin in their names.

As county jail works to limit spread of COVID, staff member and inmate die of virus on same day

Laurie Channell, left, is greeted by her daughter, Kim, at Aurora Medical Center–Kenosha on her last day working as a nurse on Thursday. Channell is retiring after a nursing career of 48 years.