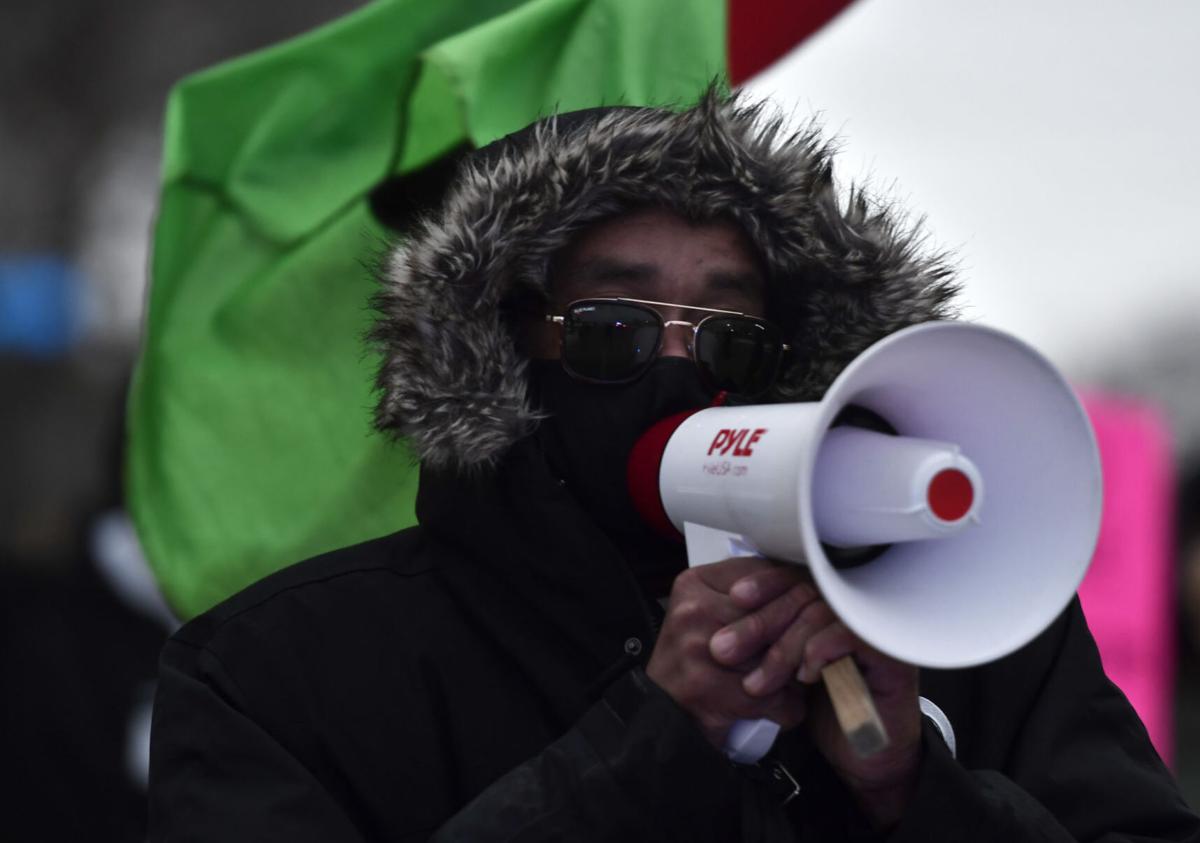 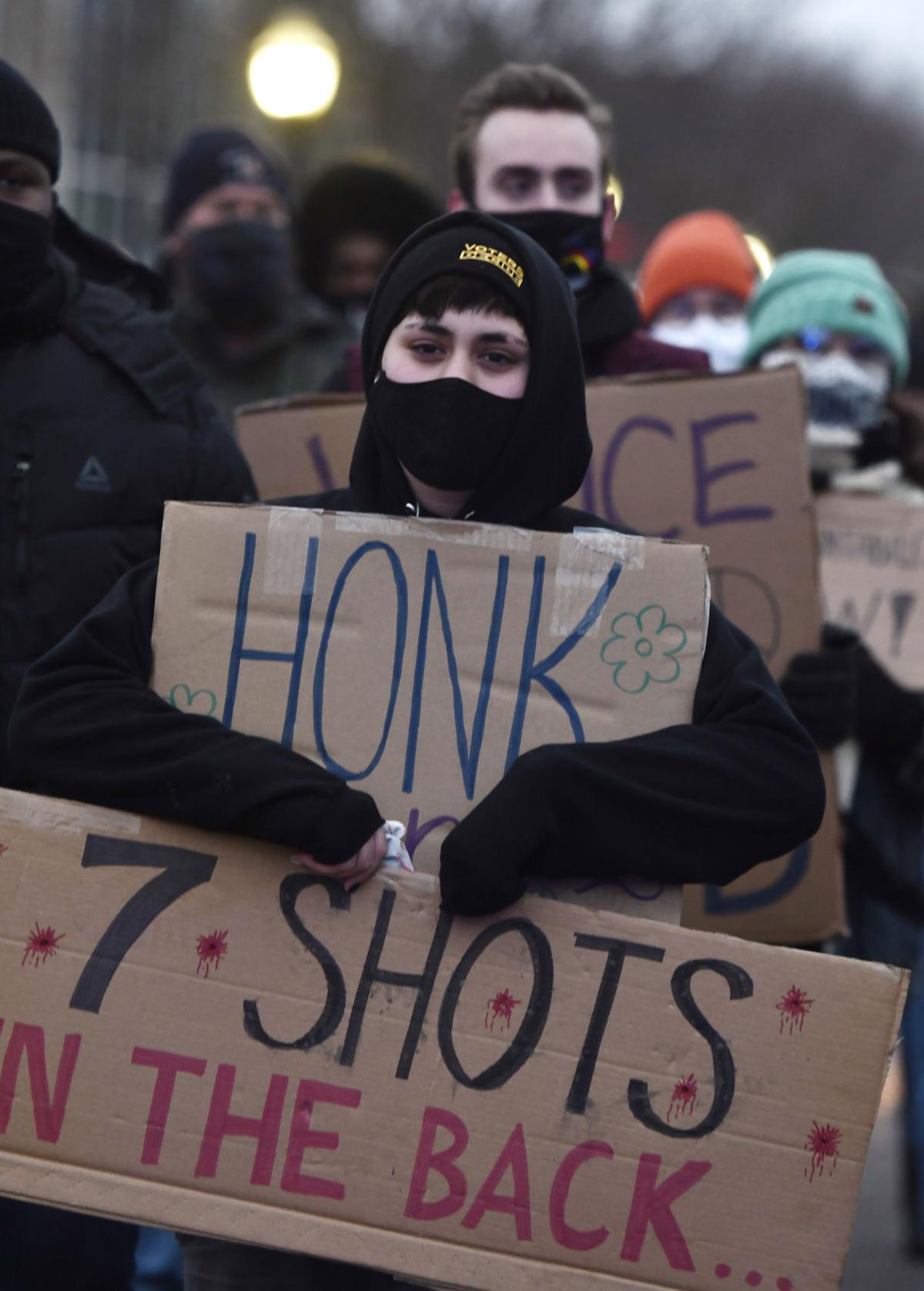 Demonstrators hold signs as they march around the Kenosha Municipal Building on Monday afternoon. The crowd was estimated at about 50 particiapnts. 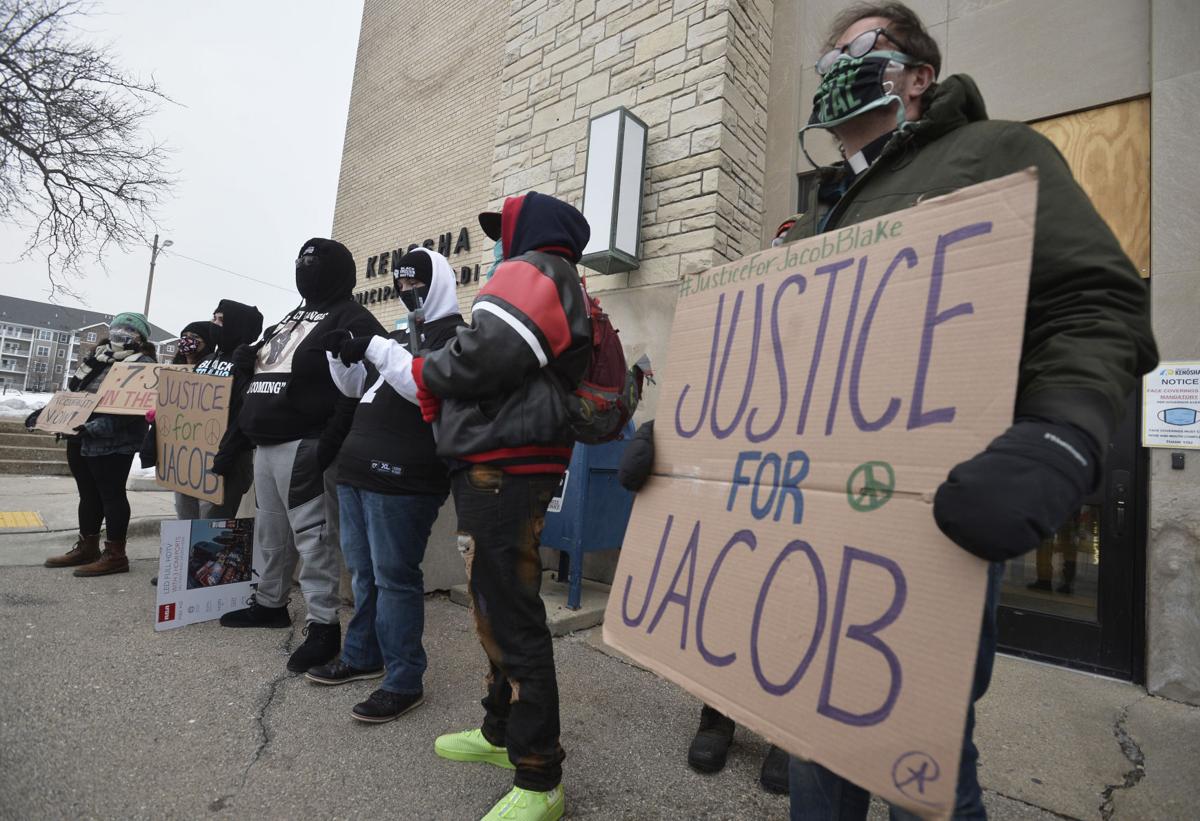 Demonstrators hold signs Monday afternoon in front of the Municipal Building during a protest organized by Leaders of Kenosha demanding that Officer Rusten Sheskey be removed from the Kenosha Police Department. 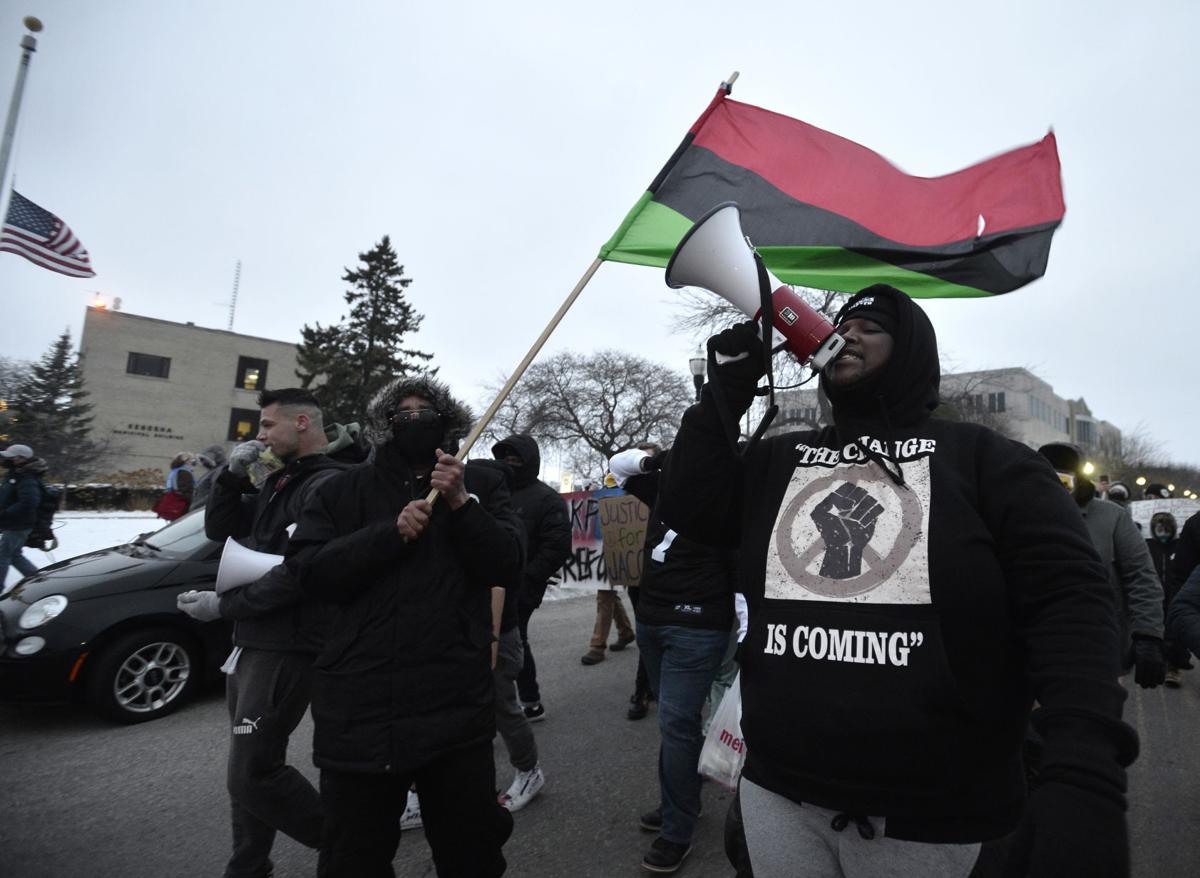 Xavier Simmons of The Change is Coming organization, right, helps to lead a protest Monday organized by Leaders of Kenosha demanding Officer Rusten Sheskey be removed from the Kenosha Police Department.

Family and friends of Jacob Blake, along with other local activists, marched on City Hall on Monday night, demanding the termination of the officer who shot Blake seven times on Aug. 23 and who the Kenosha County District Attorney declined to criminally prosecute a week ago.

Erica Ness, the director of community engagement for Leaders of Kenosha, said the organization and Blake’s family would continue to demand justice for Blake, despite the decision by District Attorney Michael Graveley. During a press conference Monday held outside the Municipal Building, 625 52nd St., they called for Officer Rusten Sheskey to be fired from the Kenosha Police Department.

“We’re here to let the mayor know and to let the Kenosha Police and Fire Commission know that Kenosha’s not safe with Rusten Sheskey continuing to be on the police department,” Ness said. “And, in addition to long-term reform — so we do not have any police officers shooting Black men in the back anymore — we need him gone.

“We’re not going to stop marching until we make sure Kenosha is safe and protected by the police officers, instead of (people) fearing for their lives.”

According to City Administrator John Morrissey, as of Tuesday no complaints have been filed with the City or the Police and Fire Commission against Sheskey or any other officers involved. Morrissey said “any action initiated against a member of the Police Department (or Fire Department) needs to be charges, not simply a complaint. The charges have to detail the specific violations committed by the officer.”

“Normally charges are filed by the Chief of the department, but (they) can be brought by the commission itself after an investigation, or ‘any aggrieved person’ who would need to identify the specific violations alleged against the officer,” Morrissey said. “As the commission is the body who will hear the charges, their authority in bringing charges should be used carefully and as a last resort.

“All formal charges must be in writing, and the officer is entitled to a due process hearing.”

Morrissey said the authority to remove an officer from the department rests with the commission, not the mayor, “and must be for cause.”

Jacob Blake’s uncle, Justin, said the family would “press on to the state level and through the federal level” — including asking President-elect Joe Biden to examine law enforcement reforms. Blake said the family is also scheduled to meet with other elected officials when they travel to Washington, D.C., next week for the presidential inauguration.

“Jacob Sr., my big brother, will be with us as we go to D.C. for the celebration of Martin Luther King’s birthday,” Justin Blake said while surrounded by a media throng Monday. “We’ll stay the next couple of days to be there for the inauguration.

“And we have tentative appointments with the president-elect and the vice-president-elect and (Speaker of the House) Ms. Pelosi, and others that we need them to take a look at national, federal laws that can protect African Americans.”

Blake said African Americans should be able to shop or go to school “without living in terror” of police using excessive force against them.

“It must not and cannot be tolerated,” he said.

Blake said community leaders and residents continue to see “significant” turnouts at protests against his nephew’s shooting. Monday’s press conference and demonstration drew about 50 to 60 people who later took to the streets marching around City Hall, yelling “Fire Sheskey!” repeatedly.

To the beat of a drum, they shouted out the number of times Blake had been shot, saying “that ain’t right.”

“They see this is wrong,” Blake said. “The whole world saw the video. Believe what your eyes told you. This was nothing more than a modern-day lynching. The judge, the jury and the trial was in the seven shots delivered by Officer Sheskey. We’re not gonna rest until he’s fired, indicted, has his day in court, and is convicted.”

According to Blake, without such justice African Americans would continue to be virtually imprisoned and marginalized.

“We will not have the seeds of our community and our family stripped away out of the soil and taking their lives away that they can’t mature and be the world citizens that they can be and have a positive impact on this community.”

Decision not a setback

Graveley’s decision last week not to prosecute Sheskey has not deterred the Blake family from continuing to speak out, Blake said.

“It’s 2021. We aren’t worried about a thing,” he said earlier in the press conference. “We know right is right.”

“I’m here to continue to fight for the Blake family,” he said. “We’re not going to allow anybody to give us lies and innuendos. And just because they hold this title for the City of Kenosha and it comes from a white guy — which usually, African Americans and other people have had to take, whether good, bad or ugly, for the truth — this isn’t the truth. This cannot be happening, and we’re not going to stand for it.

“At no time is it appropriate to shoot a citizen of any city, any town or any state in the United States, in the back.”

After several months of investigation by the Department of Justice and a review of that investigation by an independent use-of-force expert, Graveley announced on Jan. 5 he did not believe criminal charges were warranted in the case.

Graveley said the investigation showed Blake was armed with a knife and had struggled with police attempting to arrest him for a felony warrant. The district attorney said that Blake had fought off other efforts to subdue him, including officers’ use of tasers.

According to Graveley, Sheskey fired seven shots, which struck Blake in the back and side, after he believed it appeared Blake was twisting toward him with the knife while trying to get into a vehicle with his children. According to the district attorney, statements from other witnesses and physical evidence matched that explanation.

Sheskey remains on leave while the Police Department conducts an internal investigation into whether he violated department policies.

Demonstrators hold signs as they march around the Kenosha Municipal Building on Monday afternoon. The crowd was estimated at about 50 particiapnts.

Demonstrators hold signs Monday afternoon in front of the Municipal Building during a protest organized by Leaders of Kenosha demanding that Officer Rusten Sheskey be removed from the Kenosha Police Department.

Xavier Simmons of The Change is Coming organization, right, helps to lead a protest Monday organized by Leaders of Kenosha demanding Officer Rusten Sheskey be removed from the Kenosha Police Department.