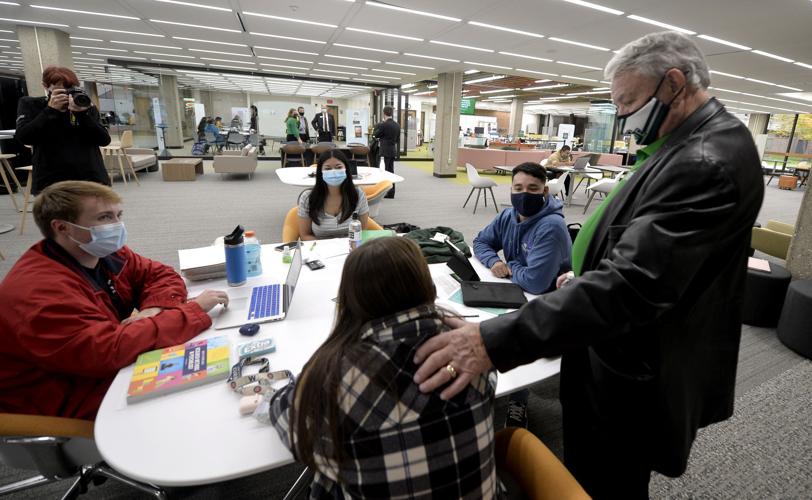 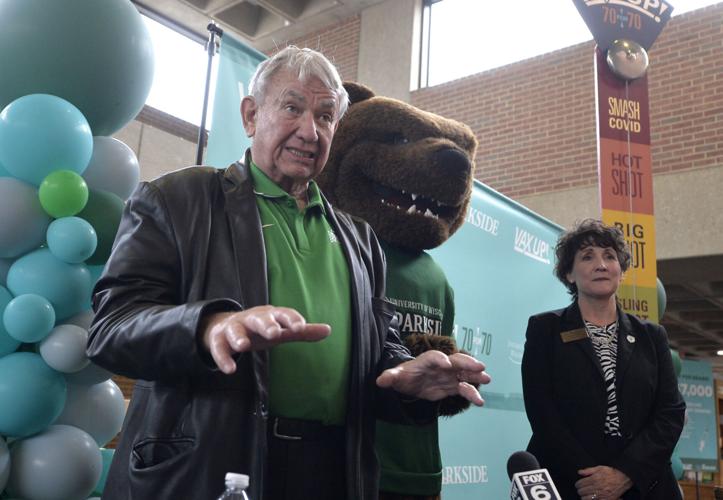 UW System President Tommy Thompson speaks as he stands with mascot Ranger Bear and Chancellor Debbie Ford as he visits UW-Parkside on Oct. 28, 2021, for the 70 for 70 vaccination effort. 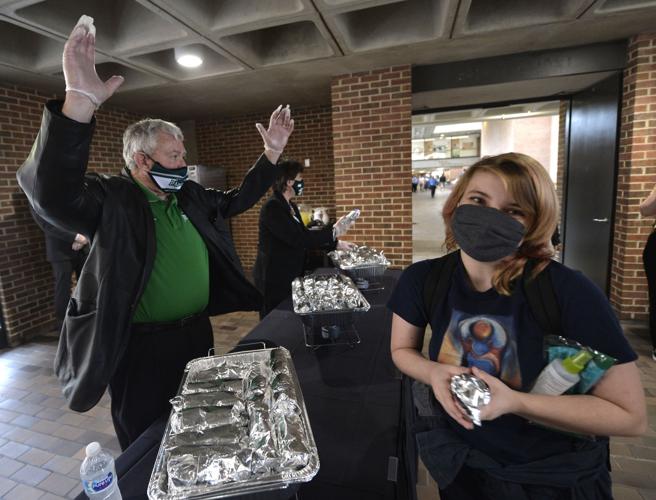 UW System President Tommy Thompson, left, raises his arms announcing food being served by him and Chancellor Debbie Ford during his visit at UW-Parkside for the 70 for 70 vaccination effort on Thursday, Oct. 28, 2021. 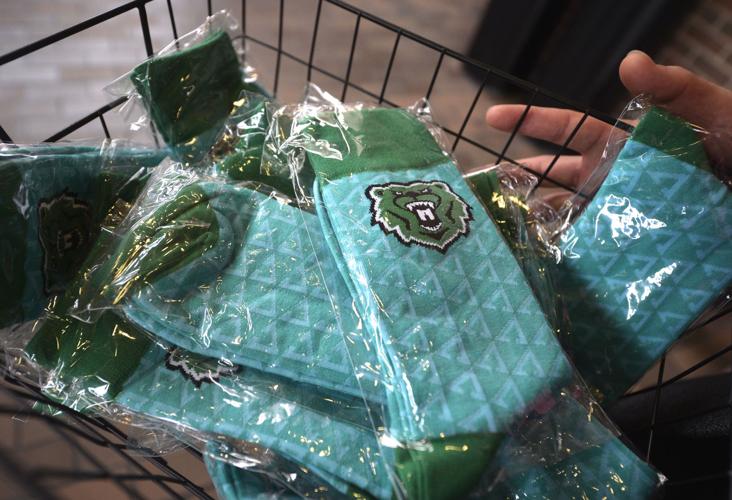 Socks were given to students and visitors while UW System President Tommy Thompson visited UW-Parkside for the 70 for 70 vaccination effort.

SOMERS — The hallway leading to the Molinaro Concourse on the UW-Parkside campus took on the feel of a pep assembly Thursday afternoon, complete with a lunch that would have made any Wisconsin tailgater proud.

And students and staff who made their way through the line at noon were greeted by a special guest server — former governor and current UW System President Tommy Thompson. Thompson was at the campus to celebrate the news that Parkside earlier in the day had reached the 70% COVID-19 vaccination rate.

The school now has a fully vaccinated student population rate of 73%.

Thompson, who sported a green Parkside polo, mingled with the crowd as he and Parkside Chancellor Debbie Ford handed out bratwursts and beverages as part of the school’s “Brats and Socks for Shots” event.

“I’m so thrilled that we have not only reached, but exceeded the ‘70 for 70’ and are at 73%,” Ford said. “I’m so proud of our campus community because it is the one we know we can keep our campus safe. Kudos to our students, faculty and staff and everybody for coming together.”

Parkside was joined Thursday by UW-Superior as the latest school in the system to reach the 70% landmark, which made both locations eligible for one of 70 scholarships valued at $7,000 as part of the UW System’s “Vax Up! 70 for 70” campaign.

Twelve of the 13 UW-System schools now have hit the mark, with just UW-Platteville below the threshold. The most current online information lists Platteville at 54% of students who are fully vaccinated.

The deadline, which was extended by two weeks, is Sunday.

Thompson said the idea for the campaign was first met with skepticism, but he was confident that each of the System schools would push the importance along to the students.

“The chancellors are very, very competitive,” he said. “They don’t like to lose. When we (first) looked at it, Parkside was way down and close to the bottom. She (Ford) is an outstanding chancellor, very dedicated and would never settle for being down in the bottom quartile.

The main goal, Thompson said, is public safety during the ongoing pandemic.

“It’s the right thing to do, and at the same time, it’s an educational tool because we can teach about vaccines and about viruses,” he said. “It’s just a win-win-win situation.”

Just a little more than a month ago, Parkside had the lowest rate among the entire UW System at 38 percent — but Ford said once information was passed from students to the school, that number began to climb.

“As we reached out to our students, they were letting us know that they were vaccinated, many of them were vaccinated earlier this year,” she said. “It was a matter of them telling us and getting that information in our systems here at the university. It was just a full team effort.”

The event Thursday was something Ford said was born from a desire to energize the campus. Along with the lunch and a visit from the school mascot, Ranger D. Bear, staff handed out teal and green socks to mark the occasion.

“The energy on campus could not be better,” she said. “So, we’re thrilled.”

News came out Wednesday that UW System campuses will mandate vaccines for its employees in order to comply with a President Biden order for federal contractors.

Thompson on Thursday said he’s not in favor of mandates, but the UW System stands to take a huge financial hit if it doesn’t comply.

“I don’t like mandates,” Thompson continued. “I like the way we’re doing it here, by voluntary (means). It gives it an excitement and a chance to educate. But I’m not going to jeopardize our federal contracts.”

Thompson said which employees will fall under the mandate is still being decided.

“Everything is still being looked at,” he said. “I’m not going to let this order prevent us from getting these contracts.”

Las Margaritas, the Uptown Kenosha bar that two people were killed outside of earlier this month, has decided to close and has turned in its l…

The Kenosha Police Department officially confirmed the identities of the two deceased victims of the Las Margaritas shooting on Sept. 18 as 33…

The Kenosha Police Department is investigating a stabbing which reportedly occurred Sunday night in a south side mobile home park.

I scream, you scream and everyone at Scoops Ice Cream and Candy shop screamed for ice cream Saturday afternoon as the local shop attempted to …

A Kenosha man died in a single-car crash near Union Grove Sunday night; alcohol may have been a factor in the crash, the Racine County Sheriff's Office reported Monday afternoon.

WATCH NOW: State patrol chase ends just off I-94 with vehicle in the water, suspect in custody

New Carthage College building expected to be completed by May

Study: Be kind, it's actually good for you!

Study: Be kind, it's actually good for you!

'I send money to a lot of people': Herschel Walker responds to check woman claims was for abortion

'I send money to a lot of people': Herschel Walker responds to check woman claims was for abortion

Look to the sky, it's space month! What you can see in the sky during October

Look to the sky, it's space month! What you can see in the sky during October

UW System President Tommy Thompson speaks as he stands with mascot Ranger Bear and Chancellor Debbie Ford as he visits UW-Parkside on Oct. 28, 2021, for the 70 for 70 vaccination effort.

UW System President Tommy Thompson, left, raises his arms announcing food being served by him and Chancellor Debbie Ford during his visit at UW-Parkside for the 70 for 70 vaccination effort on Thursday, Oct. 28, 2021.

Socks were given to students and visitors while UW System President Tommy Thompson visited UW-Parkside for the 70 for 70 vaccination effort.