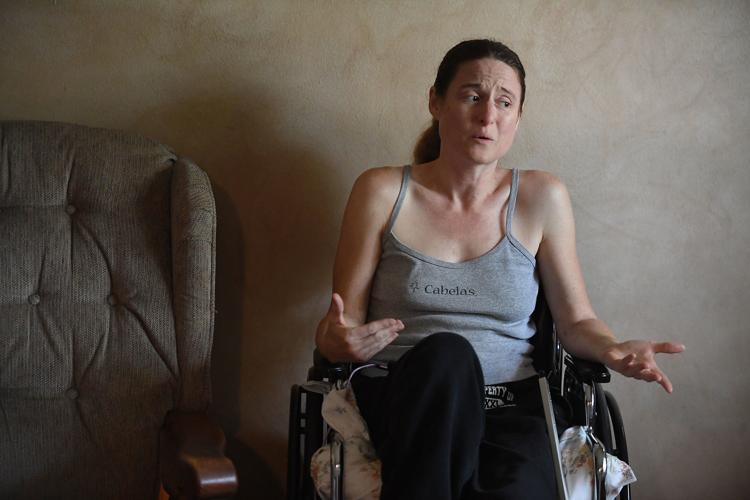 Jennifer Kilburn talks about critical injuries she suffered in an auto accident caused by a drunken driver. After five surgeries, she is wheelchair-bound until she heals enough to begin physical therapy to relearn to walk again. She and her husband plan to lobby for changes to the state’s drunken-driving laws to make it more difficult for offenders to quickly get behind the wheel of a motor vehicle. 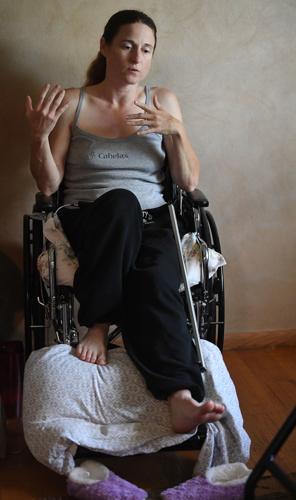 Jennifer Kilburn talks about critical injuries she suffered in an auto accident caused by a drunken driver.

A Kenosha woman who was critically injured when a drunken driver crashed into her car just a half hour after he was released from police custody is working on her recovery and hoping to lobby for tougher drunken-driving laws.

Jennifer Kilburn had just left her home at 4:47 a.m. on Aug. 9 and was headed to work at Aurora Hospital, where she is a nurse who works with patients before and after surgeries.

Three minutes later, a car driven by Jesse Liddell, a 25-year-old Kenosha man, allegedly ran a red light at 75th Street and 60th Avenue, smashing into the side of Kilburn’s car.

The force of the crash shattered Kilburn’s pelvis and ruptured her diaphragm, catapulting her intestines into her chest cavity and causing a lung to collapse. When a witness ran to her car to help her, he found her unconscious, according to a criminal complaint.

The crash was Liddell’s second drunken-driving offense in less than 2½ hours.

Liddell had just been released 30 minutes before the crash from the Pleasant Prairie Police Department. Police had released Liddell — who had been arrested for operating while intoxicated at 2:23 a.m. that same night — to his mother after she signed a responsibility agreement that she would not allow him to operate a vehicle for 12 hours.

After the crash, Kenosha Police reported Liddell smelled of alcohol and failed a field sobriety test, according to a criminal complaint.

After the crash, Kilburn, 40, was taken first to Aurora, then transferred by helicopter to Froedtert Hospital in Wauwatosa where she almost immediately was taken into surgery — the first of five surgeries the first two weeks after the crash. Two surgeries were aimed at repairing her ruptured diaphragm and repairing internal injuries. Three were focused on repairing her pelvis.

She spent days on a ventilator and doesn’t remember the crash or her first days in the hospital.

“They basically had to reconstruct my pelvis,” she said. “There are plates, screws, a whole hardware store in there.”

Kilburn was able to return to her Kenosha home over the weekend in a wheelchair after two weeks in the hospital. Because of the damage to her pelvis, she will remain in the wheelchair for three to four months, doctors saying she will not be able to put any weight on her legs for at least that time.

“After that, I’ll start physical therapy and then I’ll have to learn how to walk again,” she said.

An avid runner and fitness enthusiast, Kilburn said the prospect of being confined to a wheelchair is difficult.

She said her doctors have told her that, because the damage to her hip joints was so extensive, she will likely need a total hip replacement within three years. They are unable to do that now because the bone needs to heal first.

Kilburn said it is also difficult to have to depend on others for help. Her husband, Robert Brown, along with a rotating collection of family, fellow nurses and friends from the Kenosha Running Club, have been helping with everything from cutting the lawn to providing meals and changing her bandages.

“I’m blessed,” she said of all the people turning out to help, but she said the role reversal is tough. “It’s hard to accept help when you are used to being the helper.”

The crash is also taking a financial toll. Liddell — who was not injured in the crash — did not have auto insurance, Robert Brown said, and so the medical bills associated with the surgeries and hospital stay will be billed to Kilburn at the same time she is unable to work for months.

Will lobby for law change

While Kilburn is focused for now on healing, she said she and her husband hope to begin work on lobbying for changes in the way drunk-driving offenses are handled in Wisconsin.

“What I would like to see happen is that people be held longer,” she said.

In Wisconsin, a first-offense drunk driving is not a criminal offense, instead treated like a driving citation.

When Liddell was cited for DUI at 2:23 a.m. on Aug. 9, Pleasant Prairie Police followed state rules in releasing him to a sober adult, who signed a state form called a “responsibility agreement,” agreeing to take responsibility of Liddell and prevent him from driving for at least 12 hours.

Pleasant Prairie Police Chief David Smetana said Liddell’s mother signed the agreement, and said an officer spoke to her and determined that she was sober.

According to the criminal complaint, his mother, Norma, told police after the crash that she drove her son to his car, left her car parked and drove his car home with her son as a passenger. The complaint states that she took his car keys, rolled them up in his pants and left them on a chair.

“She thought the defendant was going to bed,” the complaint states.

Instead, he left and went to a store, according to his statements to police.

Other driver in jail

Since the crash Liddell has been held at Kenosha County Jail for injury by intoxicated use of a vehicle. His bond has been set at $25,000.

Kilburn said she would like to see state laws changed to make sure people arrested for drunken driving cannot get straight back into a car, suggesting that they be held in custody until sober and that their vehicles are impounded for 12 hours.

She said she thinks lawmakers should also create a penalty for those who take responsibility for a person after a drunk-driving arrest and then fail to keep them from driving while still drunk.

“Where is the responsibility?” she asked.

Kilburn’s family has created an online fundraiser to help with her medical expenses. It can be found at www.gofundme.com/jennifer-kilburn-recovery-donation.

"I don't want to ever remember it'

Jennifer Kilburn talks about critical injuries she suffered in an auto accident caused by a drunken driver. After five surgeries, she is wheelchair-bound until she heals enough to begin physical therapy to relearn to walk again. She and her husband plan to lobby for changes to the state’s drunken-driving laws to make it more difficult for offenders to quickly get behind the wheel of a motor vehicle.

Jennifer Kilburn talks about critical injuries she suffered in an auto accident caused by a drunken driver.