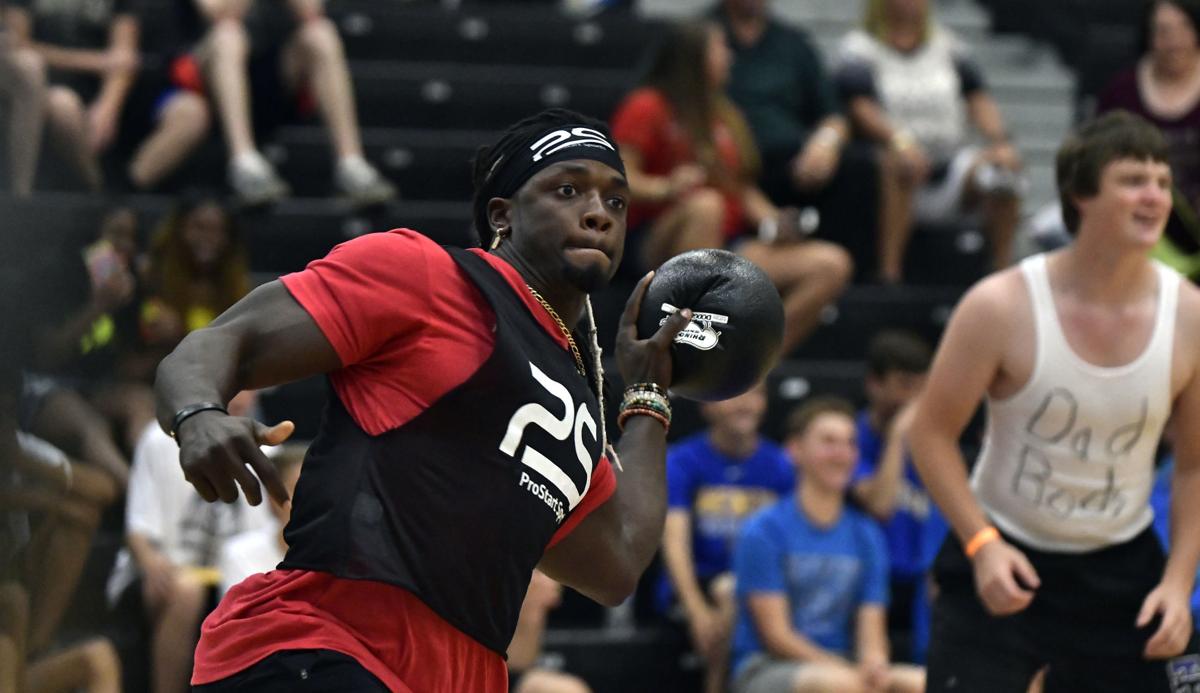 Melvin Gordon gets ready to throw while playing dodgeball Friday at Indian Trail and Academy during a charity benefit. 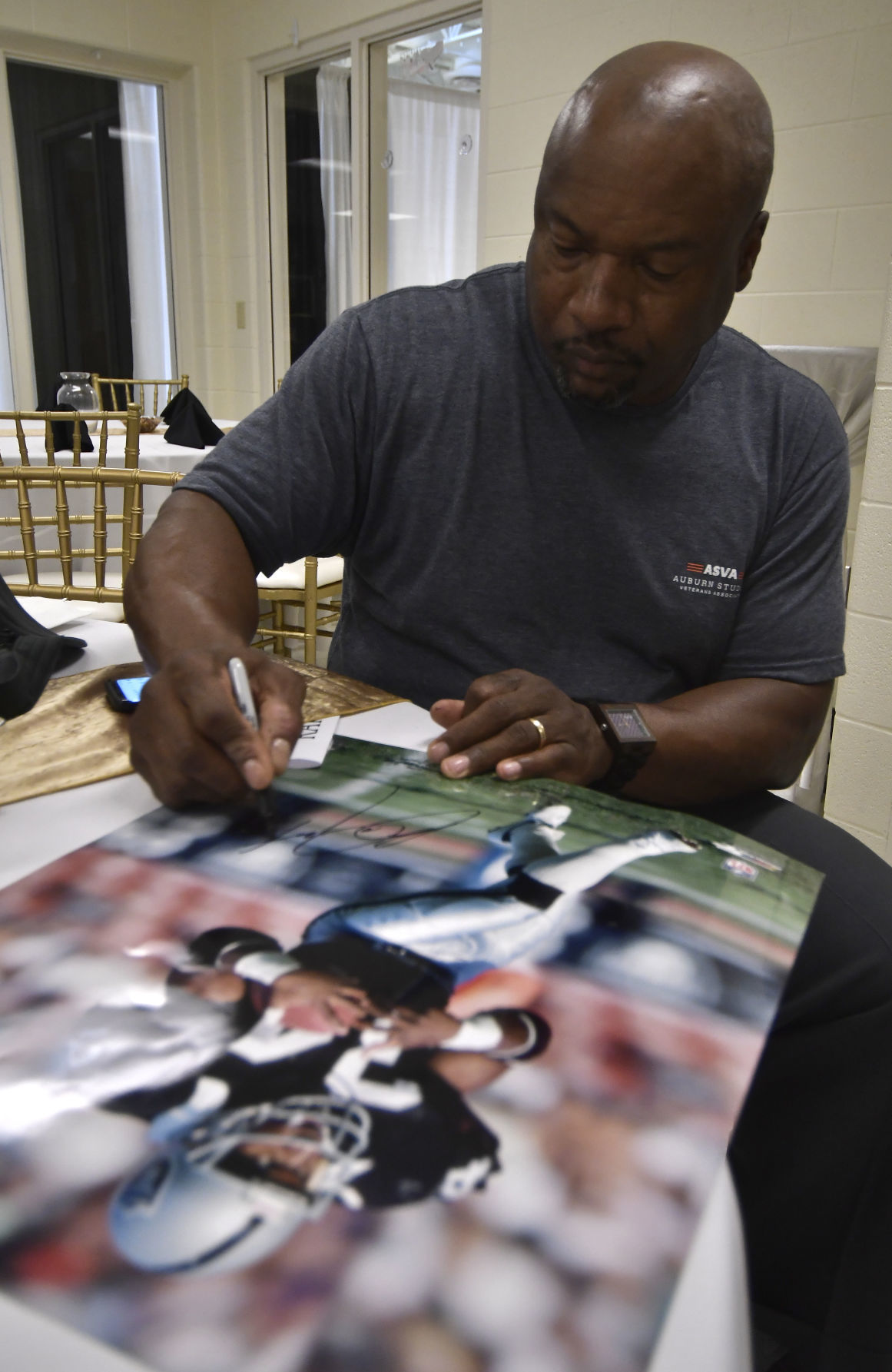 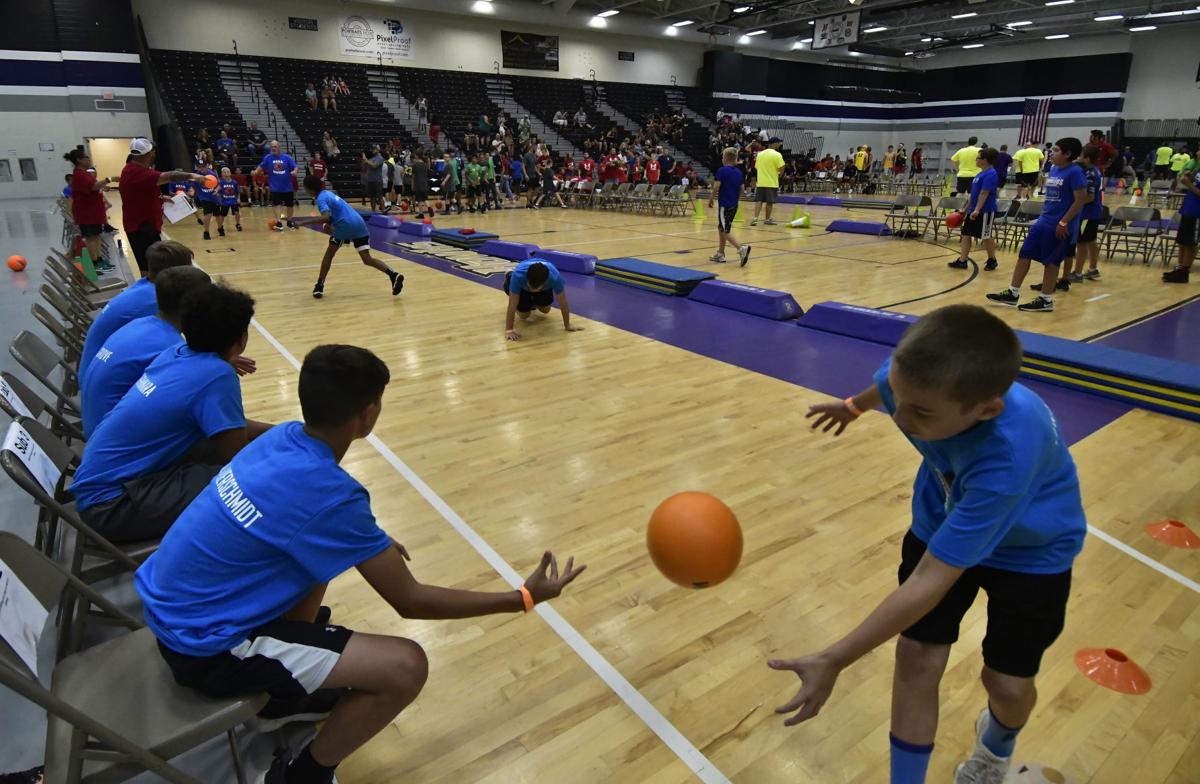 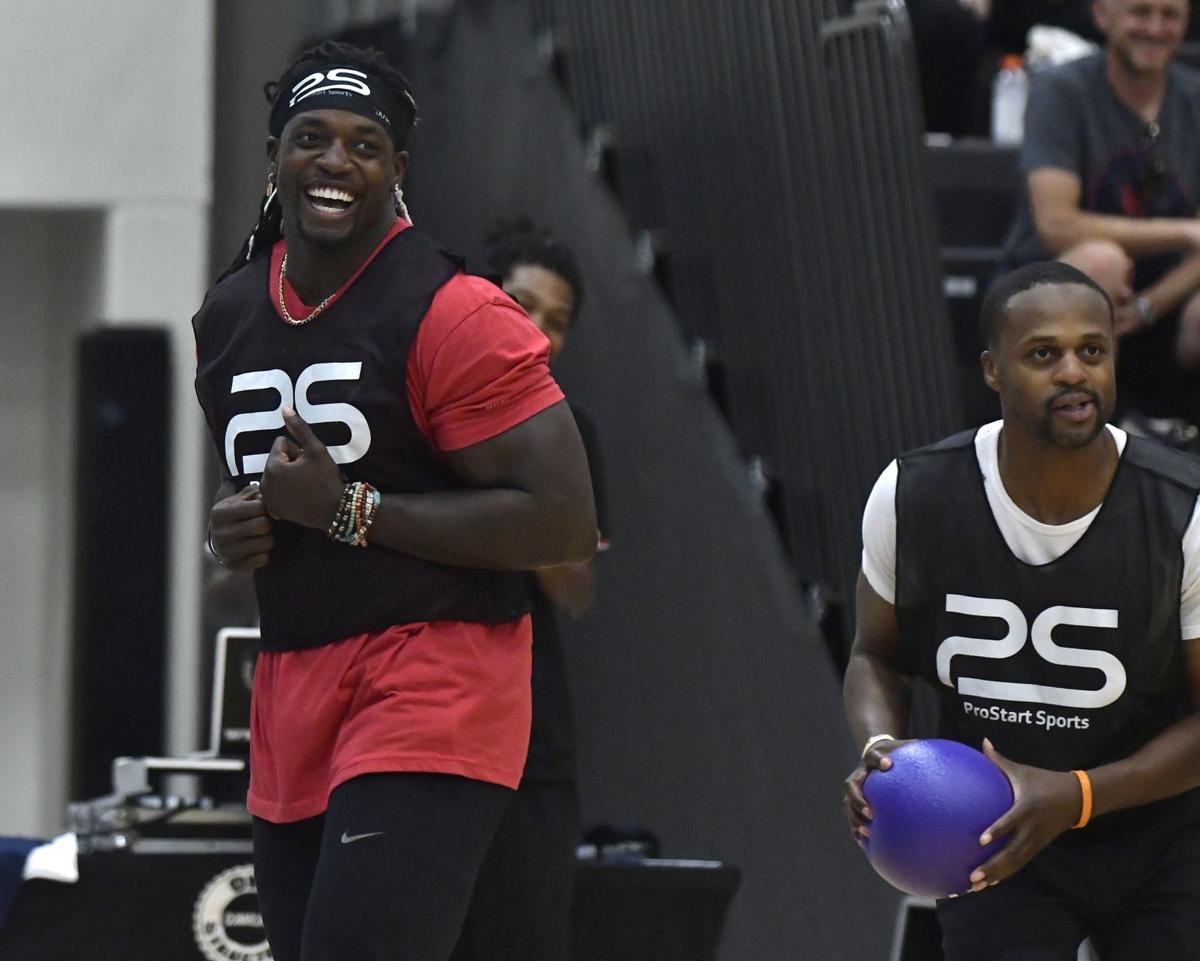 Melvin Gordon, left, laughs as he exits the court after getting hit while playing dodgeball during a fundraiser at Indian Trail on July 19, 2019. 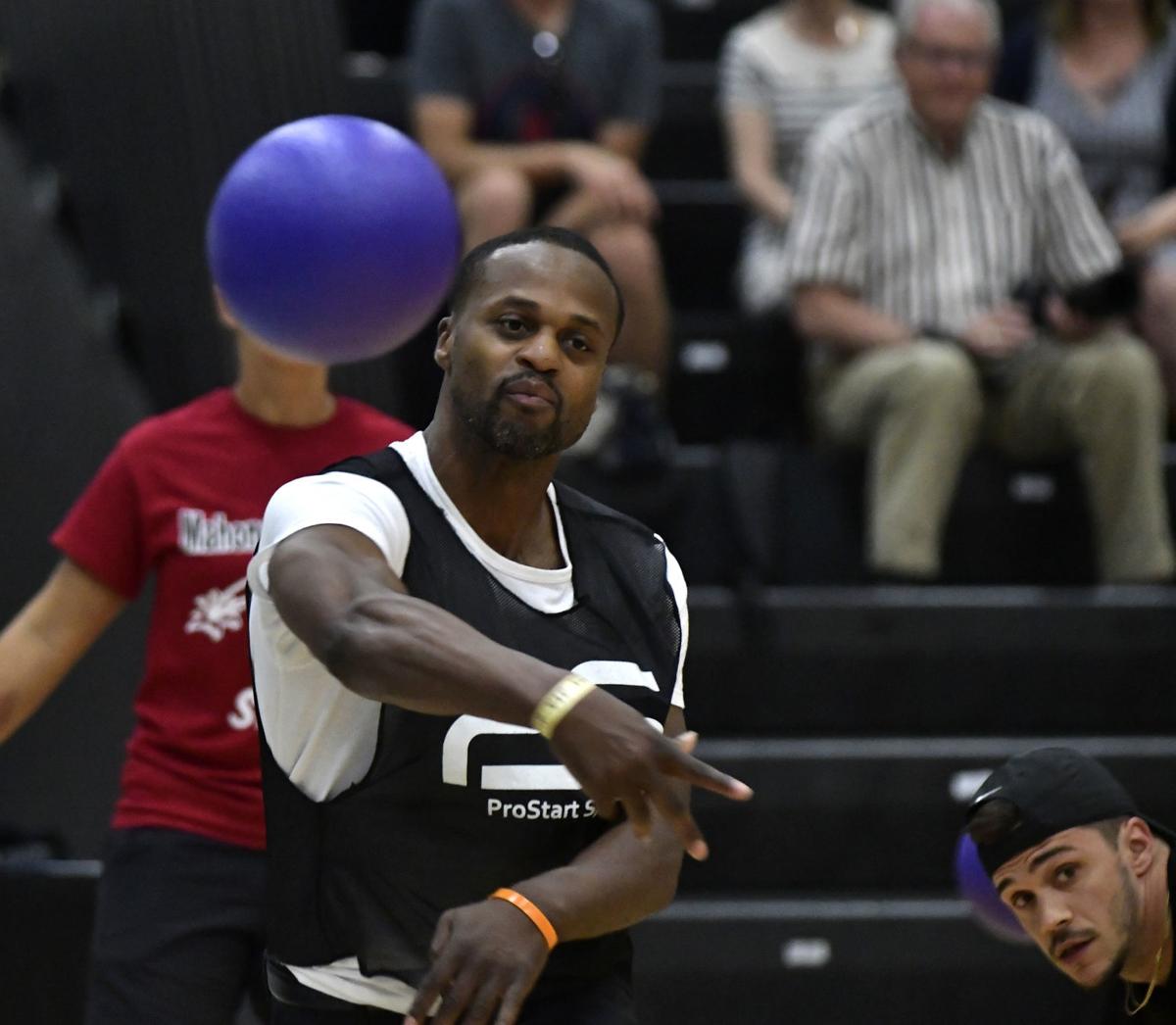 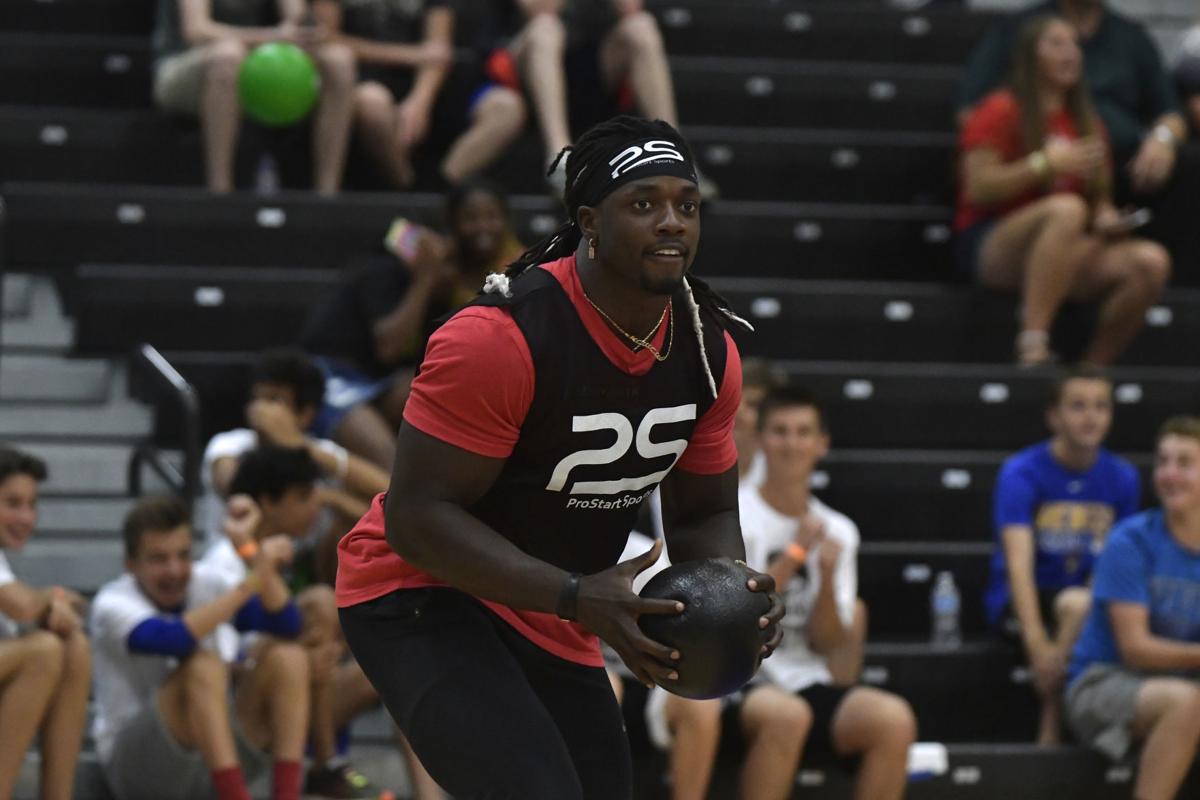 In one of his most incredible athletic achievements — and he had many — Bo Jackson, then playing outfield for the Kansas City Royals, fired an absolute missile from the warning track to home plate to improbably nab the Seattle Mariners’ speedy Harold Reynolds.

It’s a clip that’s popular on YouTube to this day.

So imagine getting pegged by a dodgeball from the arm of Bo Jackson?

Thankfully, nobody at Indian Trail High School and Academy on Friday had to find out.

Jackson — now 56 but remembered as one of the greatest athletes ever for his two-way stardom in both Major League Baseball and as a running back for the Los Angeles Raiders of the National Football League — was in Kenosha on Friday as a special guest for the Dodgeball Night of Fun hosted by Kenosha natives and current NFL players Melvin Gordon and Trae Waynes.

Anyone old enough to remember the iconic “Bo Knows” commercials for Nike can recall the mythology surrounding what a terrific all-around athlete Jackson was in his heyday.

So, was he any good at dodgeball?

“Whenever I played it, the kids never wanted me to be the one throwing the ball,” Jackson said Friday.

Well, nobody at Indian Trail got the business end of a Bo Jackson laser.

In what had to be one of the most unique events in Kenosha sports history, Gordon, Waynes and Jared D’Angelo — a gym teacher at Mahone Middle School and also the head junior varsity football coach and an assistant varsity coach at Indian Trail — co-hosted the dodgeball tournament.

Gordon had an idea

It was the brainchild of Gordon, a running back for the Los Angeles Chargers, and Waynes, a cornerback for the Minnesota Vikings, who starred at Bradford High School together and remain close friends.

Getting Jackson to attend was a huge bonus, even though the former MLB All-Star and NFL Pro Bowler — who now resides in the Chicago suburbs — had to leave before the event was over due to a prior commitment.

So, why was Jackson there in the first place?

“Melvin and his mother (Carmen) support my philanthropic ventures,” he said. “… It’s just only right to be reciprocal to give back. I live an hour and a half down the road from here ... I figured the least that I could do was get in the car to come up here to support him for a couple of hours before I battle the traffic going back south.”

Of course, there’s no mystery why Gordon was there.

He and Waynes, both first-round NFL draft picks in 2015, have always been adamant about giving back to the community. And though Waynes could not be in attendance Friday because he was traveling back from a vacation planned before the dodgeball event, they worked together — with the help of Carmen Gordon and Trae’s parents, Ron and Erin — to coordinate the activities.

“His family, my family, definitely worked hard putting things together,” Gordon said. “… We (were) definitely on phone calls, sitting in and giving input, definitely. But our parents definitely did a tremendous job with helping put this together.”

The turnout didn’t disappoint, even though the tournament had to be moved indoors to the Indian Trail Fieldhouse from Jaskwhich Stadium due to the excessive heat.

According to D’Angelo, 30 teams ranging from kids to high schoolers to adults registered for the tournament. With an average of 10 players on each team, that meant about 300 people participated, and a sizeable throng of spectators paid to watch.

Gordon did an autograph session after the tournament, and Waynes sent pre-autographed photos.

All proceeds were donated to the Mahone Physical Education Activity Fund and the Indian Trail track and field team.

“They love it. I told them … that Bo Jackson might play with them, and Melvin Gordon could play with them, and their eyes just lit up. … Bo knows. … One of the greatest athletes of all time in Kenosha, it’s hard to believe. I almost fell out of my chair when they said that he was coming here.”

Gordon and Waynes hosted a football camp at Bradford High School last July, and on Saturday at Bradford Stadium Gordon hosted his annual 7-on-7 football tournament.

So why did they choose dodgeball for this year’s event?

“(At) Mahone, we used to do this,” Gordon said. “They used to have a big tournament. In high school, we used to put our team together and come to this.

Yet Gordon, who planned to participate at least somewhat in the tournament, admitted he’s never been the greatest dodgeball player.

“I’m not the greatest dodgeball player,” he conceded. “I’ve never been, no matter how athletic I was. But I’ve always found it to be fun.”

Both Gordon and Waynes are entering the fifth and final seasons of their five-year rookie contracts.

But Gordon has been front and center in NFL chatter the last week over his contract dispute with the Chargers.

Last week, Gordon’s agent Fletcher Smith informed the Chargers and multiple media outlets — including the News — that Gordon was going to hold out of the Chargers’ training camp, which begins Thursday, and possibly ask for a trade if the team is not willing to re-negotiate his contract.

Gordon is set to earn $5.6 million this season, but he’s seeking an extension commensurate with contracts given to contemporary running backs. Despite missing four games in 2018 due to injury, Gordon rushed for 885 yards and 10 touchdowns and caught 50 passes for 490 yards and four more touchdowns.

He was named to his second Pro Bowl as he helped the Chargers to a 12-4 record in the AFC West and an appearance in the AFC divisional playoffs.

On Friday, Gordon addressed the fallout over his contract situation.

“It’s been 50-50 (in terms of support),” he said. “Some people dislike me for it, and some people are just hitting me on the shoulder for it and telling me, ‘Good job.’ It’s been up and down. It’s been kind of crazy.

“I’m just trying to stay away from it, just a couple days out of camp, just to let things go. I think people know what’s going to happen, so we’re just sitting here waiting for everything.”

Gordon would hate to miss even one regular-season game, but he’s committed to fighting for what he believes is his value.

“It’s going to kill me, because I’ve busted my butt this summer,” Gordon said. “I’m just not trying to miss any games. I just worked too hard to be sitting out. Obviously, we’ve got some great backs in this league, and you miss one game, you’re (already) behind the 8-ball, let alone two or three.

“I missed four games last year. I was top three in rushing and fell all the way to like eighth or something like that, missing those games. That just shows you how important every game is.

“I’ve been grinding to win a Super Bowl, and I know my teammates would love for me to be out there. But, like I said, we’re just playing it by ear.”

On Friday, though, Gordon had a gleam in his eye as the teams in the dodgeball tournament were being introduced. Whatever happens with his contract situation, Gordon is profoundly aware that he’s fortunate to be a role model to young athletes in Kenosha.

“It’s surreal, man,” he said. “One day, I know when I’m sitting down it’s going to all hit me. Right now, I’m just kind of living in the moment. I’m just kind of happy to be doing something for the community, just trying to do something. My biggest thing is, you never know who the next star is going to be, so you’ve got to give someone an example to follow.

“It might be someone out here, you never know. The next star might be out here, and he sees this, and he’s like, ‘You know what? One day I want to be out there and give back.’

“That’s the goal, to not only start with me and stop with me, but to continue it forever.”

Behind the Lens - Sean

A 23-year-old Gurnee, Ill., man may have been killed in a case of mistaken identity.

After a lack of legislative action last week from the GOP-led Legislature, Democratic Gov. Tony Evers said his administration plans to purchase 10,000 ventilators and 1 million protective face masks to assist with the state’s response to the COVID-19 coronavirus pandemic.

Faced with an oversupply, dairy farmers have to dump milk

Dumping milk is not something Tom Leedle, co-owner of Black Cat Dairy farm in Lake Geneva, said his three-generation farm family has ever had …

Khari Sanford, 18, was arrested Friday in connection to the homicide. UW Police Chief Kristen Roman said the slaying "was calculated, cold-blooded and senseless."

Melvin Gordon gets ready to throw while playing dodgeball Friday at Indian Trail and Academy during a charity benefit.

Melvin Gordon, left, laughs as he exits the court after getting hit while playing dodgeball during a fundraiser at Indian Trail on July 19, 2019.