BURLINGTON — A Burlington High School teacher suspended after complaints that he pushed extreme political views on his students is claiming victory in a school district investigation of his conduct.

Take advantage of this great offer!

Just $1 gives you full access for 6 months to exclusive content from The Journal Times and journaltimes.com. The incredible deal won't last lo…

Burlington Area School District officials said Thursday that teacher Jeff Taff did not violate any law or school district policy and that he will be returned to the classroom next fall.

Taff, however, will participate in “professional development” related to concerns raised in the investigation, BASD said in a statement.

Although a full report on the investigation has not been released, Taff’s attorney issued a statement that Taff has been cleared of any wrongdoing. 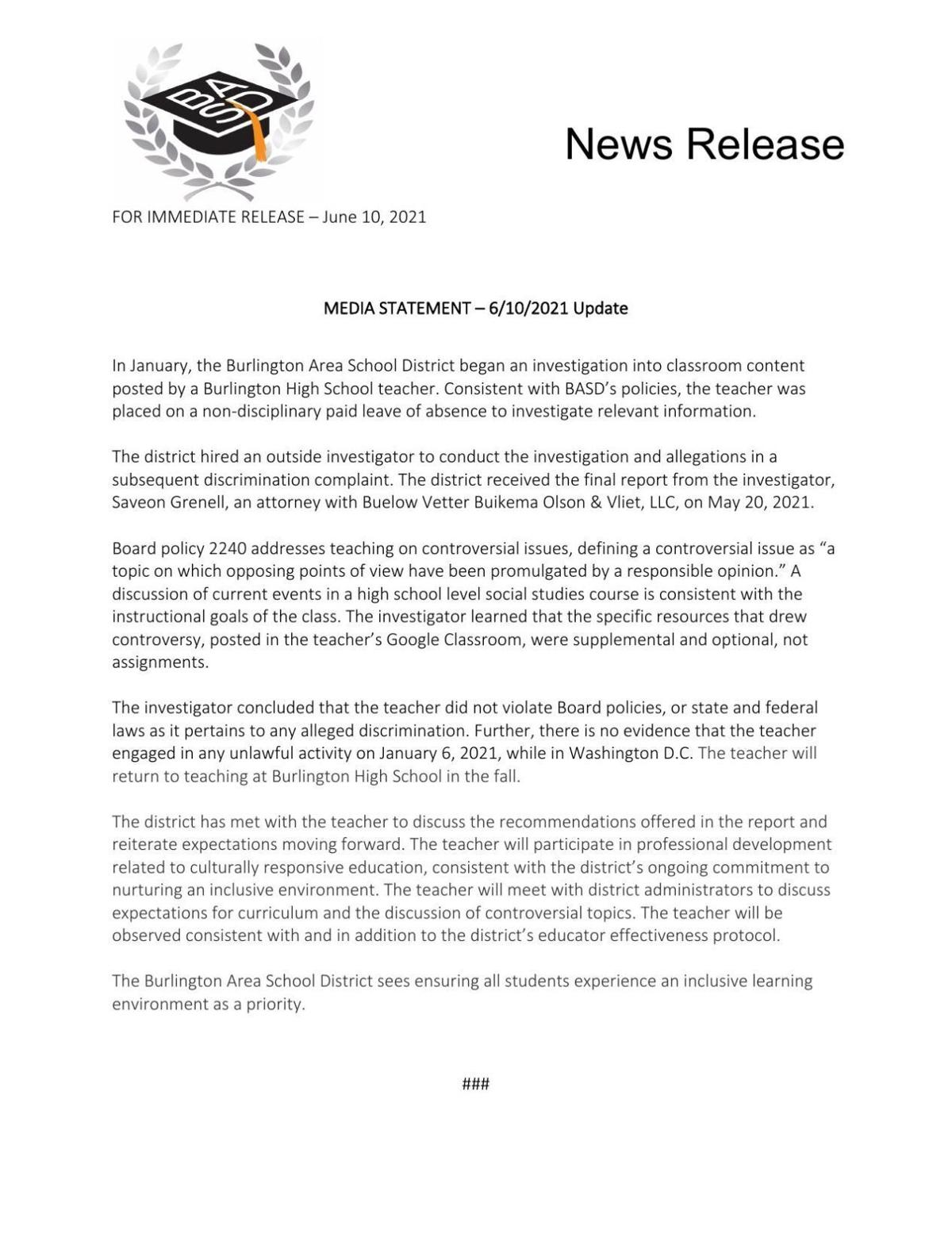 Todd Terry said the school district’s five-month investigation found that his client violated no policy and that complaints against him were unfounded.

“That certainly came as no surprise,” Terry said, “as the complaint was based on a politically motivated cancel culture.”

In an interview, Taff said he looks forward to returning to the classroom and that he will “think twice” about raising certain topics in class, including issues that could offend people of color.

“I’ll definitely keep those perspectives in mind,” he said. “I’m glad to be going back.

“It feels great to be vindicated.”

Laura Bielefeldt, a parent who filed a complaint against Taff, expressed disappointment that school administrators were allowing him back into the classroom.

“Unfortunately, I fully expected the outcome of the investigation,” Bielefeldt said. “Burlington Area School District has a long history of covering up its racism problem.”

Among other things, parents alleged that Taff permitted students to use racial slurs. 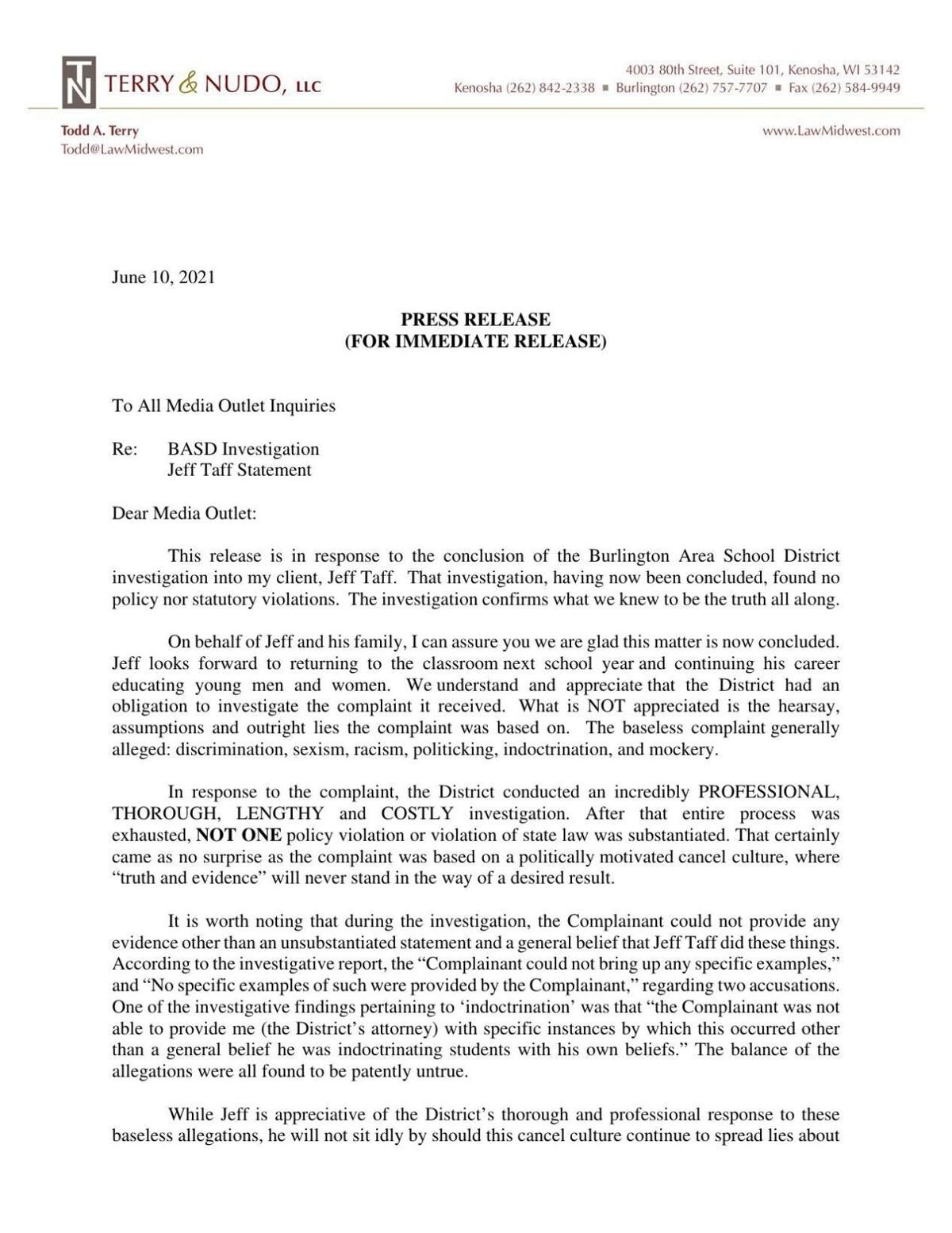 Taff, a social studies teacher in his seventh year at Burlington High School, was suspended in January after he participated in the Jan. 6 protest outside the U.S. Capitol opposing Joe Biden’s election as president over incumbent Donald Trump.

Taff messaged his students that he was “standing up for election integrity.” Parents said he also directed students to watch a video spreading unfounded conspiracy theories that Biden’s election was fraudulent.

Taff says although he participated in the pro-Trump demonstration Jan. 6 in Washington, he did not join rioters in storming the Capitol and engaging in violence that contributed to five deaths. He is not among more than 400 rioters who have been criminally charged in the incident.

BASD records later showed that Taff shared with his students unfounded conspiracy theories surrounding the COVID-19 pandemic. He distributed videos suggesting that the pandemic’s death toll had been inflated and that the public health crisis was manufactured by the Democratic Party.

Other materials he shared with students contained antigovernment and political messages.

Burlington school administrators placed Taff on paid administrative leave on Jan. 7, immediately after receiving a complaint linked to his participation in the U.S. Capitol protest. He continued to collect his $50,000 annual salary while missing virtually the entire spring semester of classes.

The situation divided the Burlington community, with some rallying to Taff’s defense and others calling for his firing.

In his announcement Thursday, Taff’s lawyer said that with Taff being returned to the classroom, the district’s investigation “confirms what we knew to be the truth all along.”

“While Jeff is appreciative of the district’s thorough and professional response to these baseless allegations,” Terry stated, “he will not sit idly by, should this cancel culture continue to spread lies about him.”

Taff said in an interview that he expects to resume teaching history and social studies classes next fall.

Asked Thursday afternoon about the outcome of the 2020 presidential election, Taff declined to say whether he accepts that Trump lost the election to Biden. He called that a personal matter.

But asked whether he would continue to share his beliefs about the election with students, he said: “They are critical thinkers. If they are able to figure that out, good for them.”

Told to take down their pride flag, this Wisconsin couple lit up the neighborhood instead

After a Racine County couple was told their rainbow pride flag violated neighborhood rules, the couple found another, brighter way to share their message.

Ready to break free of the pandemic and travel again this summer? Watch video and read about 10 Midwest adventures from the Indiana Dunes to Iowa's Field of Dreams.

Man allegedly attacks 3 people with an axe, kills 1 of them in Monroe County, Sheriff's Office says

A man allegedly killed a family member with an axe in western Wisconsin and then shot himself with a rifle.

The former Ganser Dance Hall, a family home for the past 20 years, is removed but Dane County officials have begun organizing in an effort to find a solution for the northwestern Dane County lake.

The public health order issued in August had been put on hold by the state Supreme Court in September.

Both the Assembly and Senate also passed legislation to end the extra $300 per week in federal unemployment benefits.

Legislature, Josh Kaul sue each other in pair of lawsuits over lame-duck laws

The lawsuits deal with how DOJ should handle settlements under lame-duck law provisions.

With reelection announced, Tony Evers pushes back against GOP critics

Gov. Tony Evers said his reelection campaign will focus on "unfinished business" from his first term, while also looking to buck Wisconsin's swing state trend of favoring the party not in the White House.

Ready to break free of the pandemic and travel again this summer? Watch video and read about 10 Midwest adventures from the Indiana Dunes to Iowa's Field of Dreams. 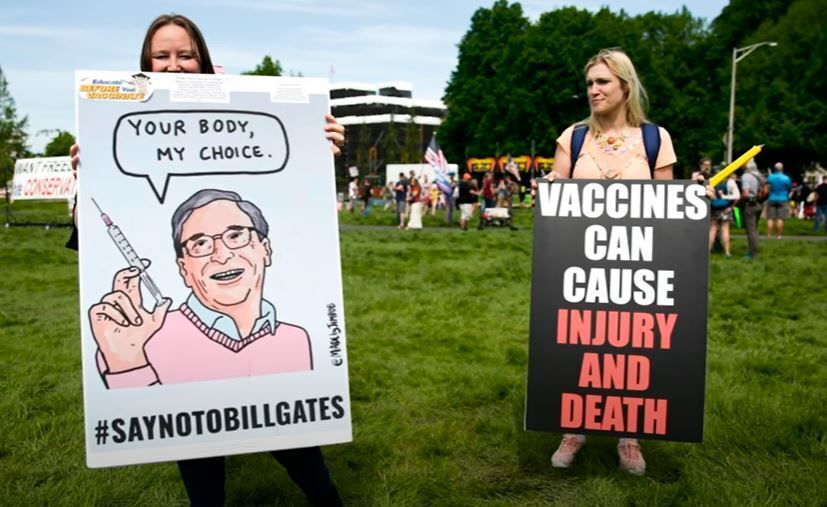 An image is shown from a video that Burlington teacher Jeff Taff shared with students in a Modern World History class, directing the students to consider COVID-19 conspiracy theories. 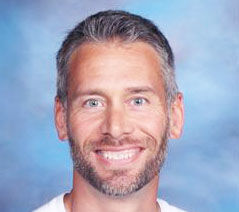