More than a year after they were torn down with chains and dragged through the streets of Madison by protesters, the “Forward” statue and a statue of Civil War hero Col. Hans Christian Heg were restored outside the Wisconsin Capitol Tuesday morning.

“It’s a great relief having him here standing up where he’s supposed to be,” bronze fabricator Jay Jurma said of the Heg statue.

For the past year, the sites of the two statues have stood empty, their bases covered with plywood boxes. Now, the bronze pieces have been repaired and reinstalled — “Forward” at the top of State Street and, on the opposite corner of Capitol Square at the top of King Street, the statue honoring Heg, a Wisconsin abolitionist who died in a Civil War battle.

Giorgio Gikas, owner of Venus Bronze Works, which spent hundreds of hours during the past year making the repairs, buffed the “Forward” statue with a wax mixture as the sun shone down on it through a partly cloudy sky. The statue, one of the state’s multiple “Forward” statues, has come to represent women’s rights and progress.

A soft clanging could be heard in the largely quiet Square as Jurma, also with Venus Bronze Works, gently adjusted a mounting pin with a small hammer.

The sounds were a contrast to the sharp banging that echoed throughout Capitol Square on June 23, 2020, as protesters battered the “Forward” statue. A deep boom followed as the roughly one-ton bronze piece fell to the ground. Hundreds cheered.

Shortly after, protesters tore down the Heg statue, decapitated it and dumped it into Lake Monona. The statue’s leg was also taken off. Heg’s head was never found.

Some of the protesters argued that the toppling of statues was strategic. They said the move was meant to show that the figures were a false representation of the city of Madison because those in power were not taking enough of a stand to support those demonstrating against racism and police brutality after the murder of George Floyd. But some protesters did not know who Heg was.

“Whatever you think of the protests, the riots, to take this down just made no sense,” Downtown resident Peter Dichsen said of last year’s destruction.

The night of unrest was prompted by the arrest of a local Black activist earlier that day after he walked into a restaurant carrying a baseball bat and swore at customers through a bullhorn.

Also that night, some of the protesters started a fire in the City-County Building downtown and assaulted Sen. Tim Carpenter, D-Milwaukee, because he was recording video. The fire was quickly extinguished, but it caused the 911 center to shut down temporarily and put juveniles in the detention center in danger. Many protesters have faced criminal charges for the chaos.

“It was like our city was falling apart,” another Madison resident, Cristi Carlson, said.

Both Dichsen and Carlson had stopped to take photos of the newly returned “Forward” statue Tuesday afternoon.

Dichsen said it was exciting to see the statue again, adding that tearing it down didn’t align with the goals of last year’s demonstrations. Carlson said “Forward” represents the best of Madison.

Department of Administration spokesperson Tatyana Warrick said there’s also “a lot of excitement” about the proposal to put a statue of the late Vel Phillips, Wisconsin’s first Black secretary of state, at the South Hamilton Street entrance to the Capitol, up the street from the Dane County Courthouse.

Phillips was also a leader in the civil rights movement and the first Black woman to graduate from the UW-Madison School of Law, earning her degree in 1951.

The State Capitol and Executive Residence Board, which oversees improvements at the state Capitol, is set to vote in October on the final design and placement of the potential Phillips statue, Warrick said.

The total restoration cost for the Heg and “Forward” statues is estimated at $82,000, Warrick said.

State taxpayers are not expected to pay for the project, which is being funded with $60,000 in grants, $13,000 from a Wisconsin Historical Society fundraising effort and the rest likely covered by insurance, Warrick said. The insurance claim is still being processed.

The “Forward” statue, a replica of the original that is stored in the state archives, suffered abrasion damage from being pulled through the street, and some of the figure’s fingers broke off when the statue initially fell, Jurma said. The replica was also covered in red paint, a challenge to remove.

The Heg statue was “far more severely damaged,” Jurma said. When protesters pulled it down, one of the legs detached from the rest of the statue, the base became twisted and the whole statue became crooked, as if Heg were leaning forward. At some point the statue’s head came off. What remained of the statue was filled with mud from Lake Monona.

Jurma said he had to borrow a Jaws of Life tool — used to extract people from damaged vehicles — from a local fire department to straighten the bronze. Heg’s head also had to be recast.

The repair process was “painstaking,” Jurma said, but he said he was glad to be a part of it.

“It was a shame to see them harmed,” he said. “I’m very glad to play a role in getting them back.”

Photos: So who was Hans Christian Heg? Here's why the Civil War hero had a statue

State property records show that Duffy sold his Wausau home in September, with the former congressman listing New Jersey as his state of residence.

A judge last week all but suggested the lawsuit would be better positioned with the city as a defendant.

At least one of the proposals in the 13-bill package, which would allow Wisconsinites to carry a concealed firearm without a license, is almost certainly headed for a veto by Democratic Gov. Tony Evers.

The new agreement, paired with similar reduced requests to the mayors and city clerks in the state's five largest cities, means all subpoenas have been blunted and all interview requests have been canceled for now.

Gender advisors for the Department of Defense are seeking to better handle domestic abuse, childcare emergencies and the upcoming winter for the 13,000 Afghan refugees still housed at the military base.

The project, announced Wednesday at an event in Sauk City, would create a “recreational, scenic gateway” that would allow users to pedal from the Madison area to Devil’s Lake State Park and beyond.

The Wisconsin Department of Natural Resources policy board plans to vote next week on whether to hire its own attorneys in a pair of lawsuits seeking to block the fall wolf hunt. 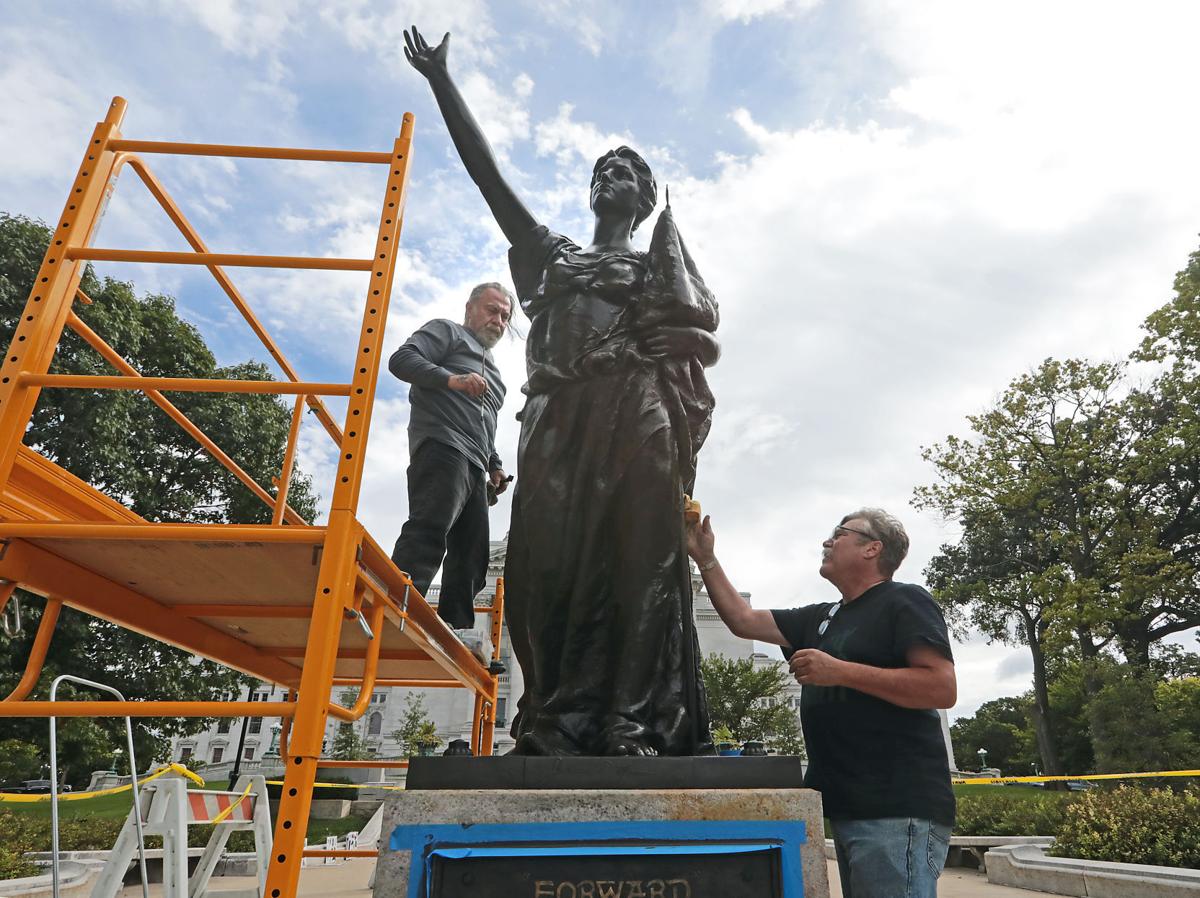 Restored after being damaged during protests last summer, the “Forward” statue was returned to its base Tuesday outside the state Capitol. Venus Bronze Works workers Giorgio Gikas, left, and Jay Jurma buff the refinished piece, a replica of the 1893 original. 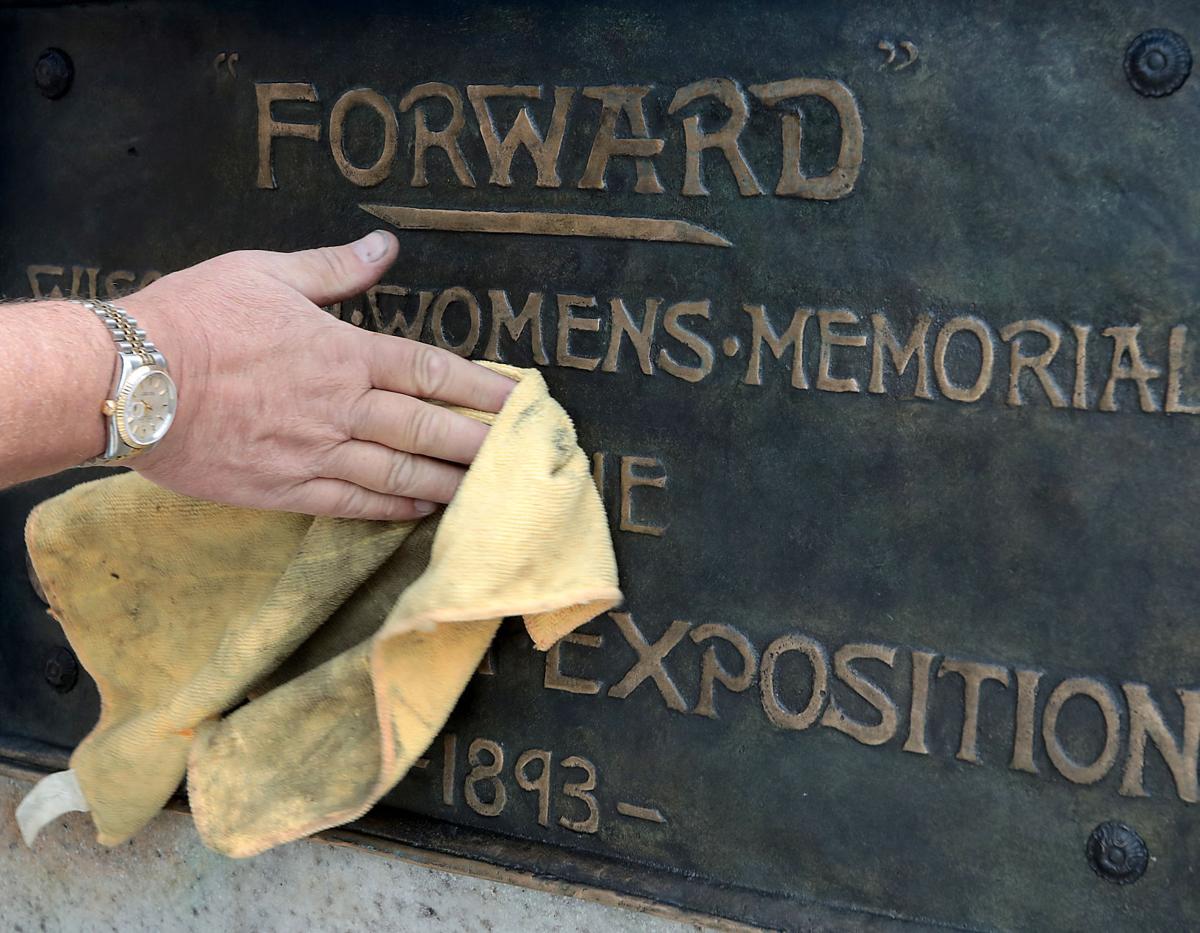 A worker polishes the plaque at the base of the "Forward" statue. The historic statue has come to represent progress and women's rights. 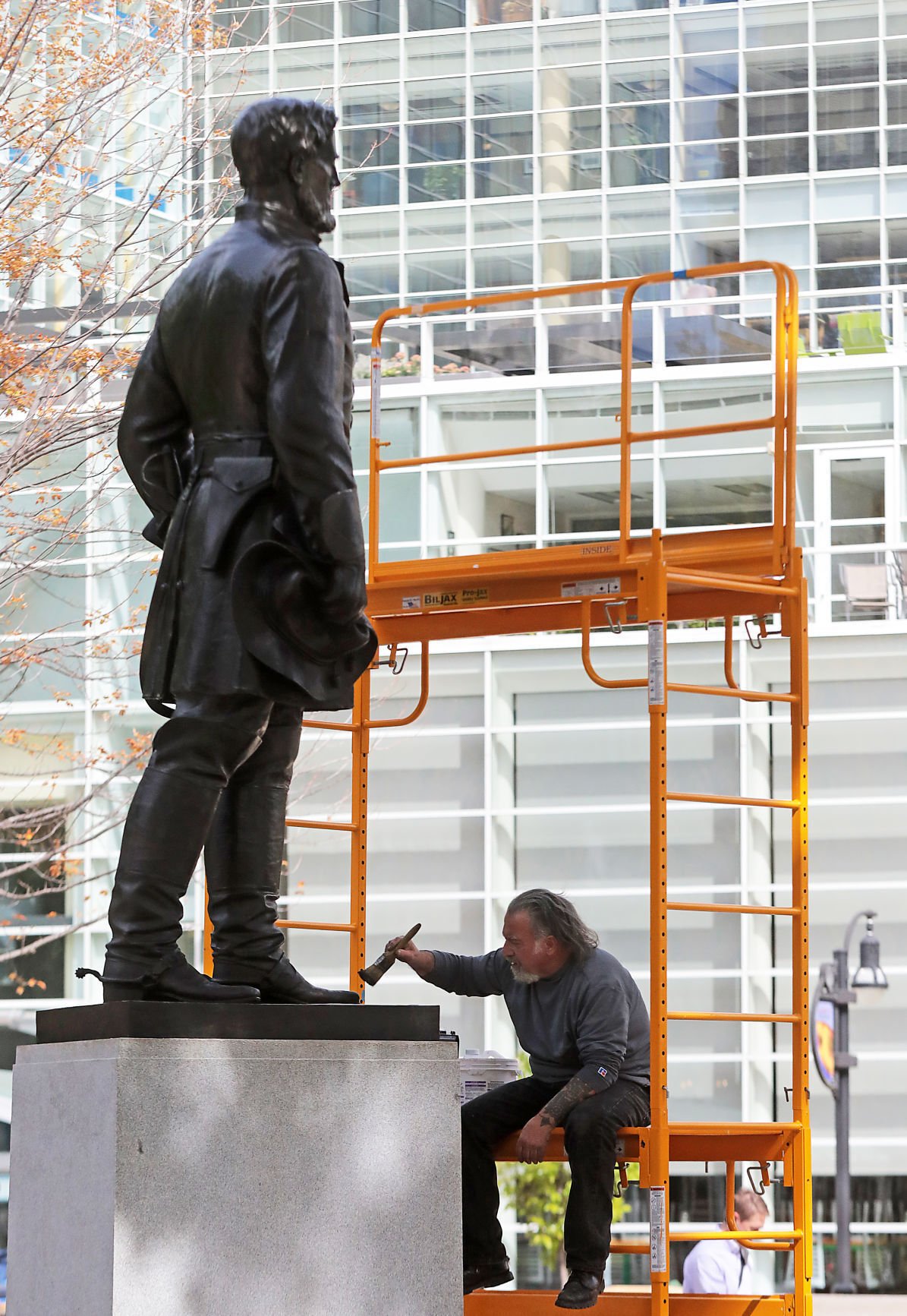 Venus Bronze Works owner Giorgio Gikas touches up the restored statue of Col. Hans Christian Heg on Tuesday. Heg, the highest-ranking Wisconsin officer killed in combat during the Civil War, fought in the Union Army and was mortally wounded on Sept. 19, 1863. 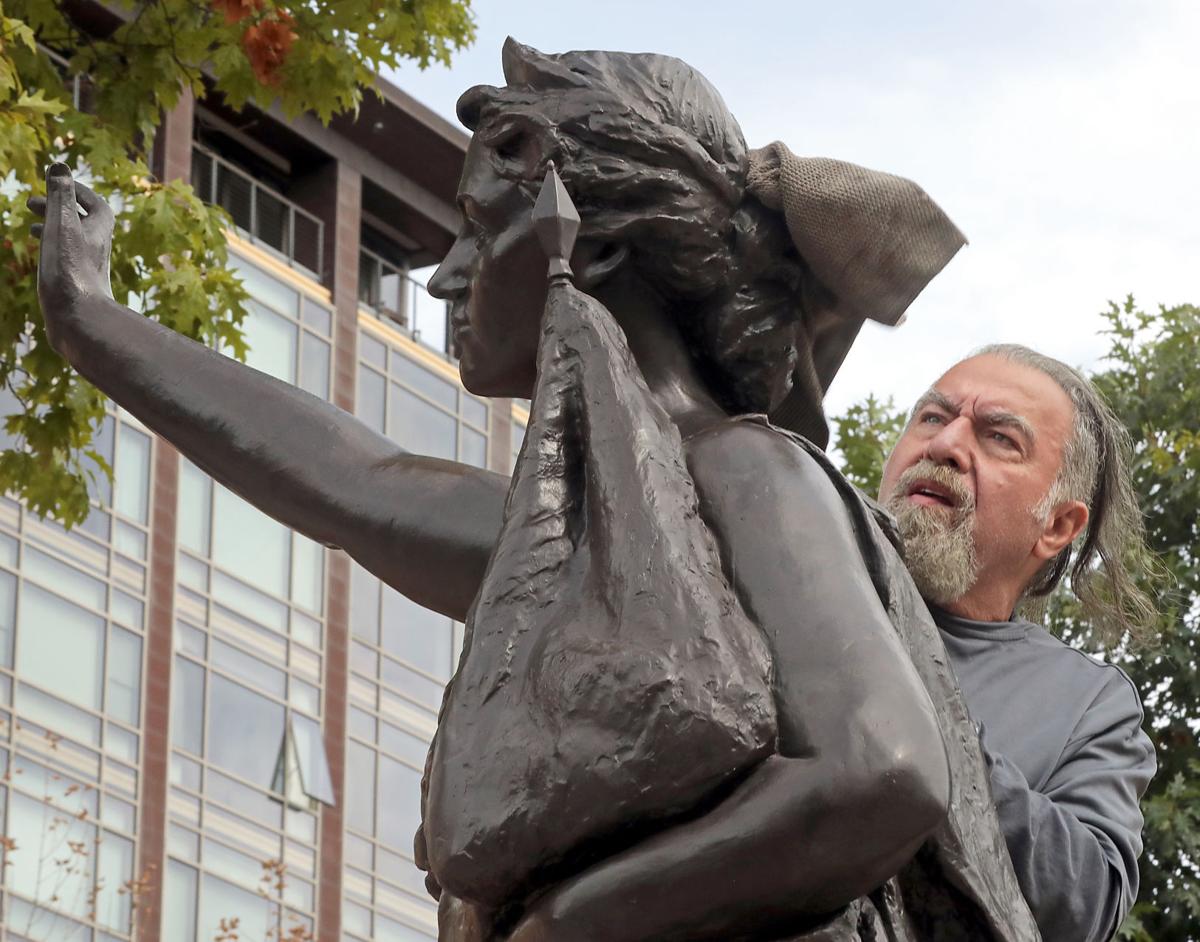 Venus Bronze Works owner Giorgio Gikas buffs the "Forward" statue, back on its pedestal Tuesday, more than a year after it was toppled during protests.