This footage was filmed and produced 20 June 2021. A line of severe thunderstorms moved into the Chicago area Sunday night, June 20. Sirens went off late at night in some areas as a tornado warning was issued in several counties. The National Weather Service announced that a tornado had touc…

At least five people, including a woman who was listed in critical condition, were hospitalized in Naperville, where 16 homes were left “uninhabitable" and dozens of other homes were damaged when a reported tornado touched down after 11 p.m. Sunday, said city spokeswoman Linda LaCloche.

More than 120 other reports of property damage had been received by 5 a.m. Monday in the city about 25 miles west of Chicago and those were expected to grow as residents surveyed the storm damage, she said. About 450 power outages were reported.

“We’re lucky that it wasn’t worse," LaCloche said Monday morning. “We have a lot of utility poles and electrical wires down, and tree damage."

Video showed several large trees downed and damage to homes and vehicles in the path of the storm. Some gas leaks were reported in Naperville, and crews went door to door shutting off lines, she said.

Officials in the nearby village of Woodridge said a tornado touched down late Sunday, damaging at least 75 structures, and a damage assessment was underway. There were no reports of significant injuries in the community, but people were urged to avoid the area due to downed power lines and trees.

The storm destroyed the second floor of Bridget Casey’s Woodridge home. She sat in a lawn chair in the driveway before sunrise Monday. Her son, Nate Casey, 16, said he was watching TV when the storm swept through and he raced to help his mother get his three younger siblings to the basement.

“I just heard a loud crash and I’m thinking, ‘Oh, what are my brothers up to?’ I go look and I see the sky, and then I hear my brothers screaming from the room," he told the Chicago Sun-Times.

Matt Friedlein, a meteorologist with the National Weather Service in Romeoville, Illinois, said a team from the weather service would be surveying storm damage Monday to determine the reported tornado's strength and its path. He said the same storm is believed to have rolled through Naperville, Woodridge and Darien, and may have also caused damage in Burr Ridge, about 20 miles southwest of Chicago,

“If there were no fatalities — and there haven't been any reported to us — that's great news considering the population of the area, the level of damage and the time of day, after 11 p.m. when many people may be asleep," he said.

Radar had also showed storm rotation over several other areas of suburban Chicago, and also in northwestern Indiana in the Hobart and South Haven areas, Friedlein said.

The threat of wind damage remained for a few hours as the line of storms moved over northern Illinois and into northwestern Indiana, forecasters said. The severe threat was declared over at 2 a.m. local time.

Severe storms hit other parts of the Midwest, where a tornado damaged several buildings and knocked down power lines and trees in eastern Iowa on Sunday night. Most of the storm damage was reported in rural areas near the town of Bernard. No injuries were reported.

This footage was filmed and produced 20 June 2021. A line of severe thunderstorms moved into the Chicago area Sunday night, June 20. Sirens we… 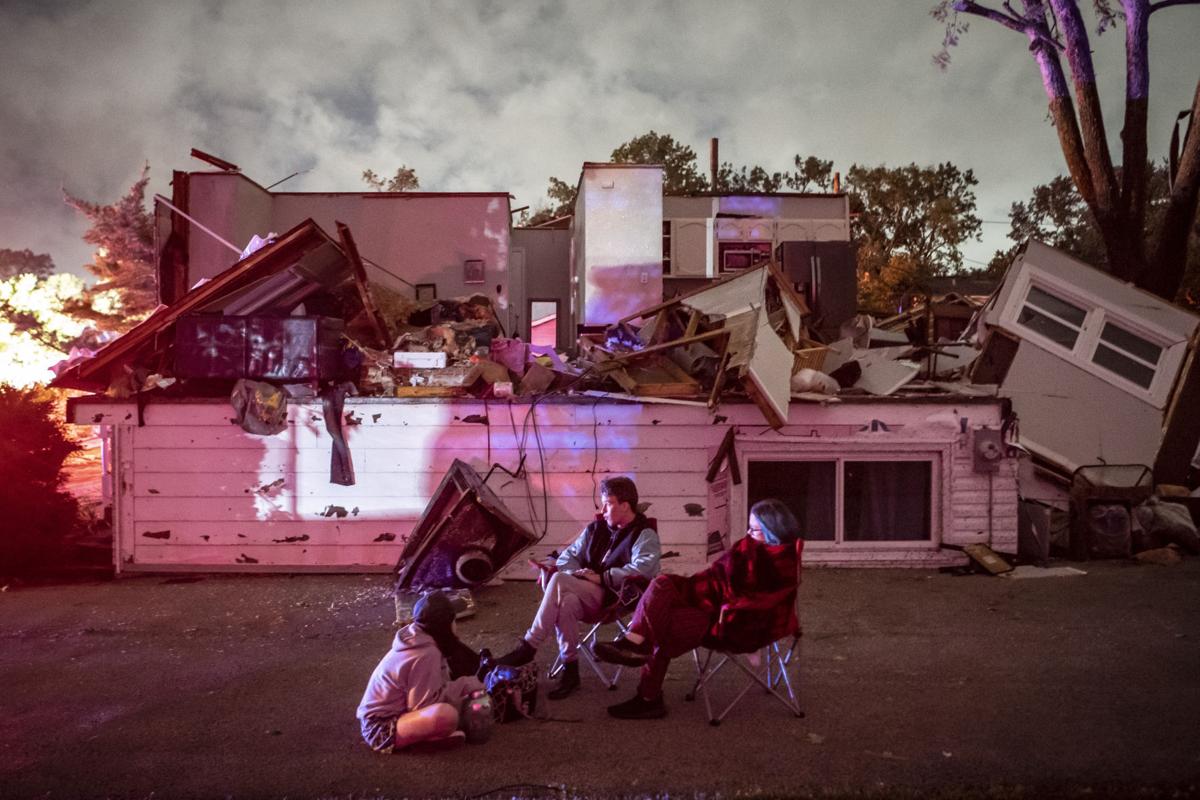 Bridget Casey sits in the driveway of her severely damaged home with her son Nate, 16, and daughter Marion, 14, after a tornado swept through the area in Woodridge, Ill., early Monday morning, June 21, 2021. 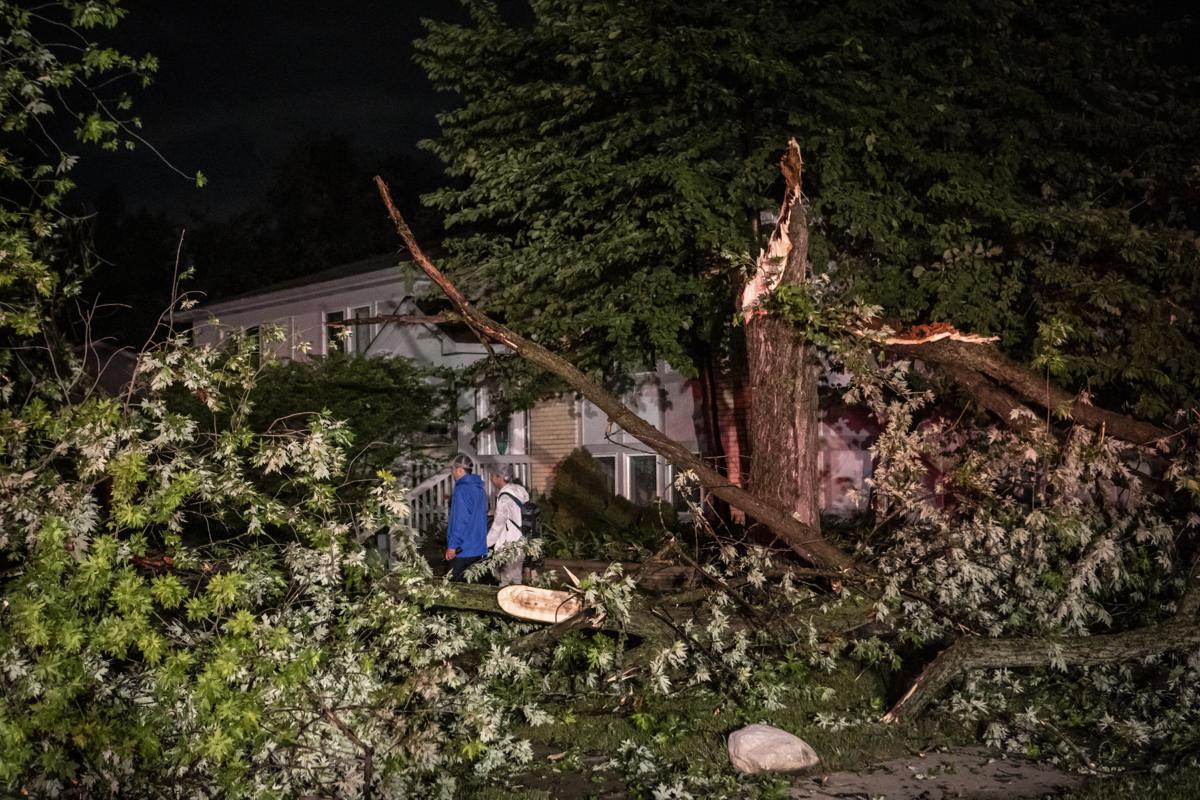 People walk around fallen trees after a tornado swept through the area in Woodridge, Ill., early Monday morning, June 21, 2021. 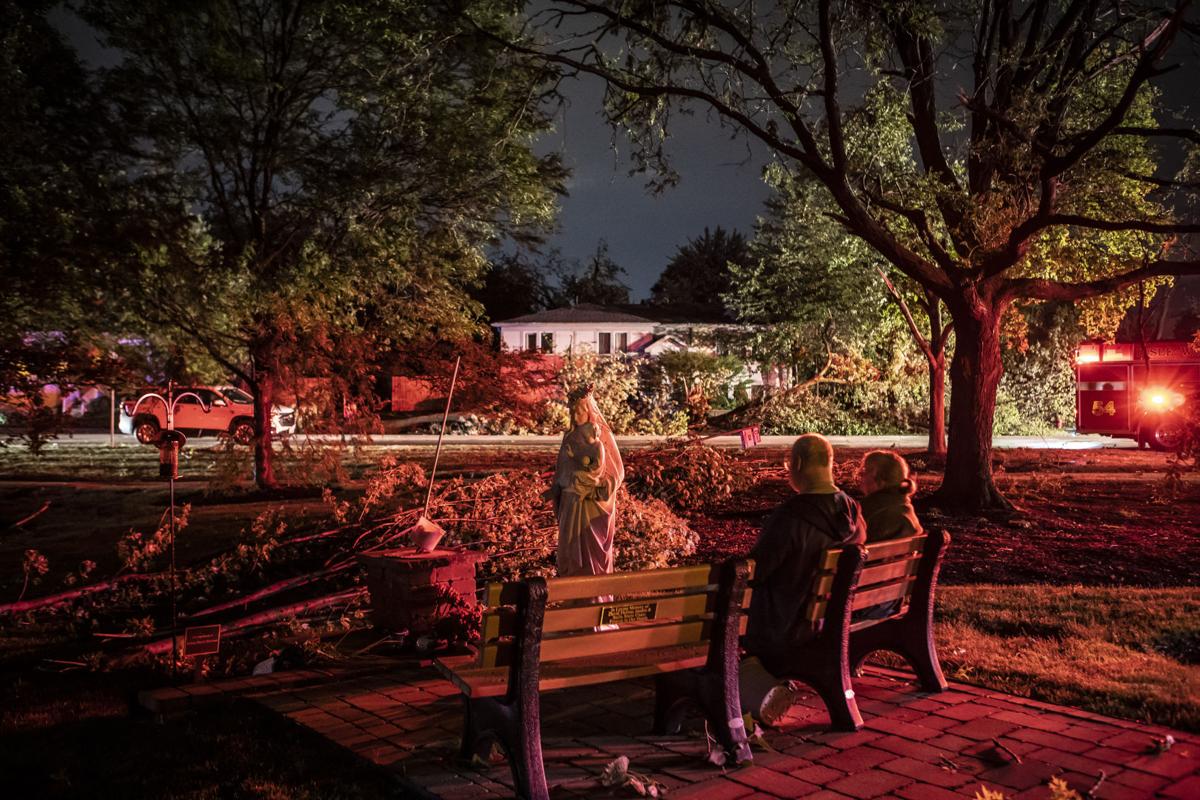 Woodridge residents Tom and Maria Bonifield sit in a park outside St. Scholastica Catholic Church after a tornado ripped through their neighborhood early Monday morning, June 21, 2021, in Woodridge, Ill.