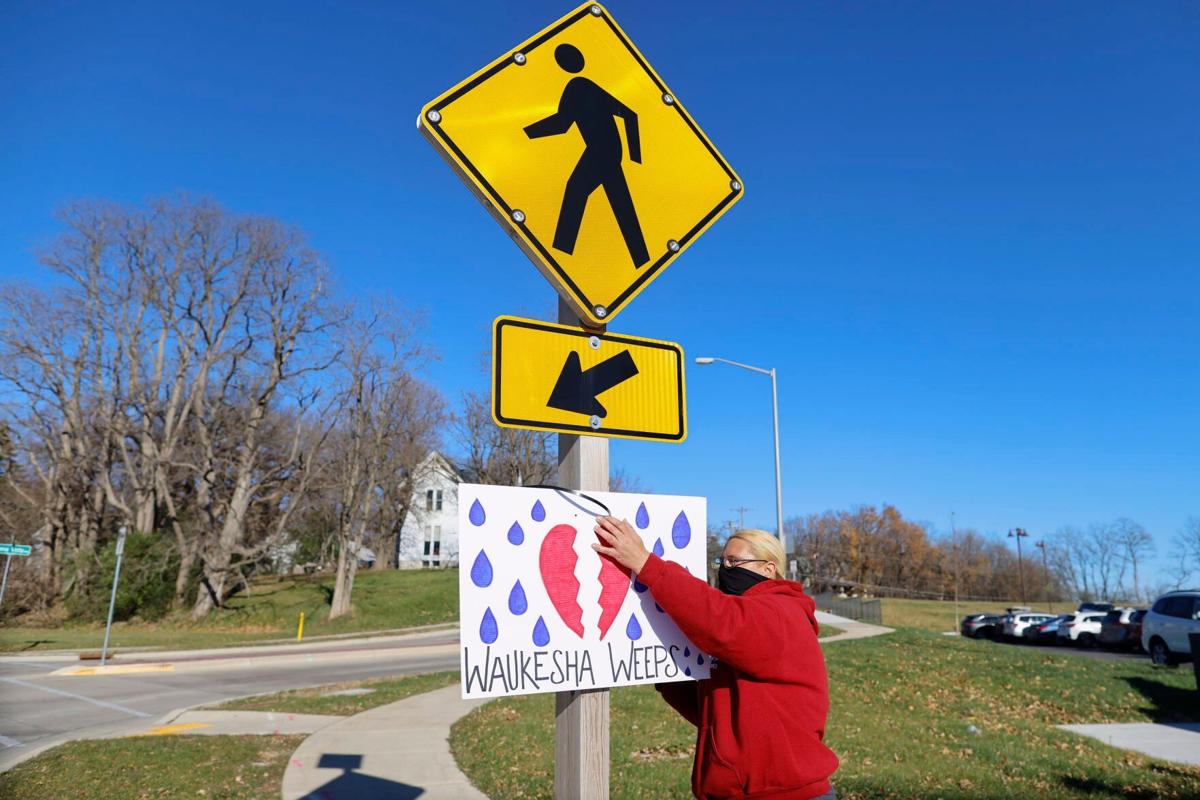 A woman puts up a sign outside City Hall in Waukesha, Monday, a day after an SUV plowed into the city's Christmas parade, killing five and injuring dozens. 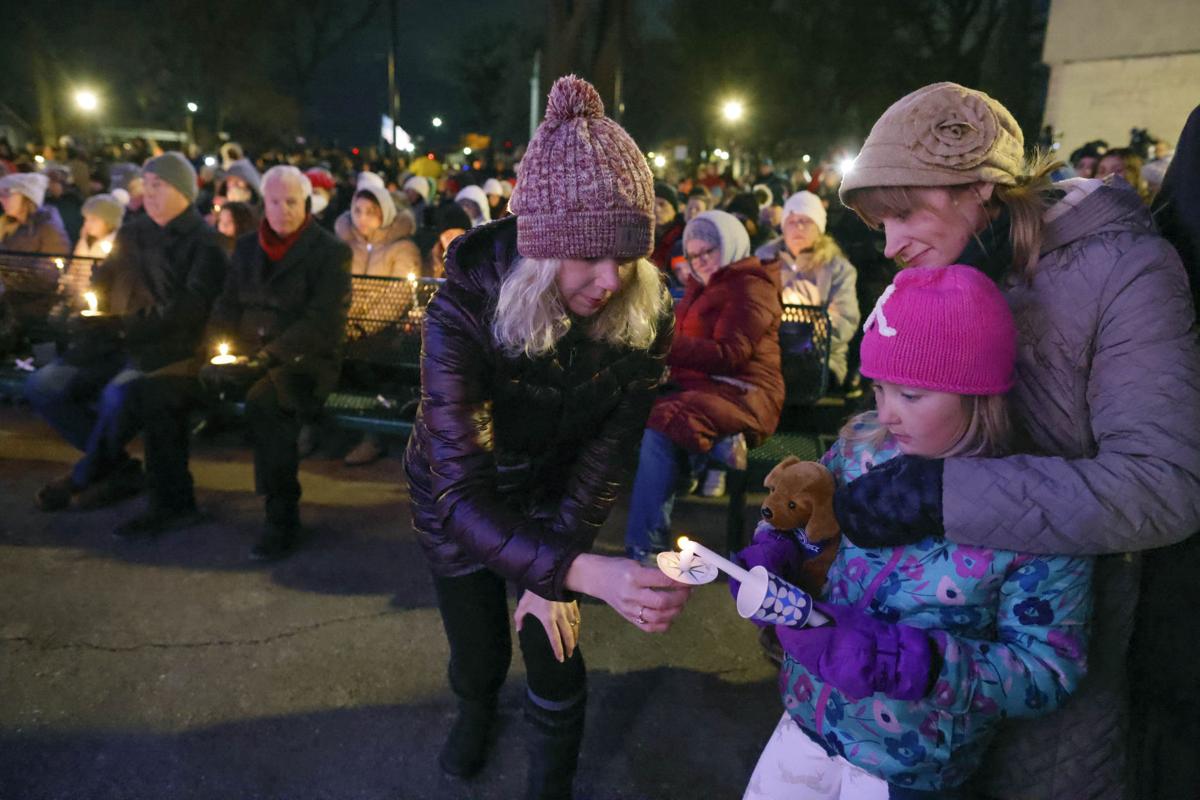 Mourners light one another's candles during a vigil in downtown Waukesha Monday. 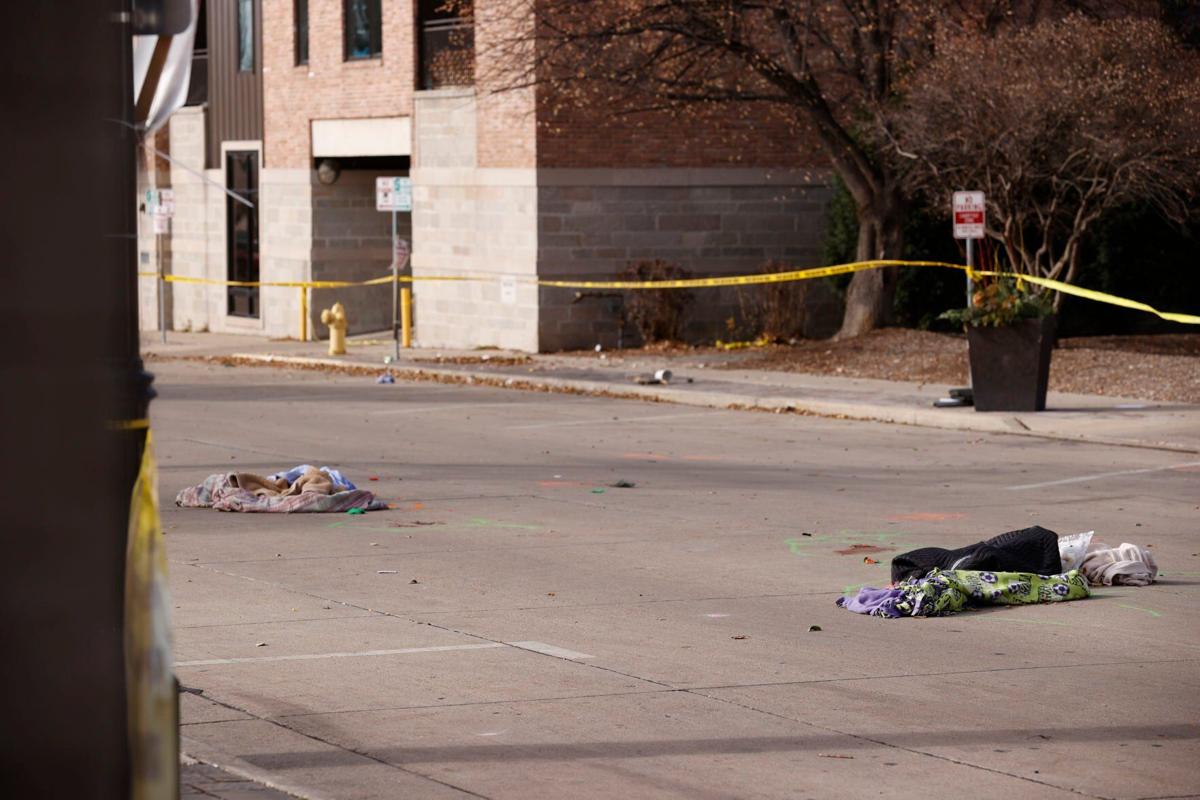 Items lie in the middle of an empty street Monday in Waukesha, where investigations continue after a vehicle slammed into a holiday parade the day before, killing five people and injuring dozens of others.

WAUKESHA — From the window of his bookstore in downtown Waukesha, Norman Bruce looked on in horror as a red SUV drove through the Waukesha South High School marching band during the city’s Christmas Parade Sunday afternoon, sending several young musicians to the hospital.

Amid the pandemonium that followed, with panicked spectators unsure of what was happening and police firing shots in an attempt to stop the vehicle, Bruce made Martha Merrell’s Books a refuge.

“I would say we had over 200 because we had all the people that were upstairs and this was all filled,” he said, motioning to the first floor of the store in the 200 block of West Main Street “Even back into our kitchen there were 15 to 20 people.”

Downtown Waukesha was largely empty Monday, first because police were blocking the area off a day after the SUV’s driver allegedly fled a domestic disturbance and plowed into some 50 people, killing five. Most businesses remained closed after the yellow police tape was gone, however, including the Almont Gallery with its handmade clothing and jewelry, and Mountain Top Coffee, with its homemade soups and breakfast sandwiches.

In place of the usual foot traffic a month before Christmas were dozens of cameras and news anchors using the area as a backdrop to their broadcasts.

Less than a mile away, on the campus of Carroll University, chaplain Elizabeth McCord held a noontime vigil that packed the Presbyterian Church-affiliated school’s Humphrey Memorial Chapel.

Everyone there had a story of where they were Sunday night, she told students and other members of the university and wider communities. They all received the texts from friends and family, she said, watched the news reports and tried to understand what had happened.

“You didn’t have to be downtown to be experiencing this pain,” she said. “Those of you who were with us here locked down on campus … last night, it was a terrible frightening thing to now know what was happening.”

Afterward, Carroll Student Senate President Scottee Hoff, 21, said students were were told to shelter in place from about 5:30 p.m. to 9 p.m., having been told there was a dangerous person on or near campus.

“To see what happened so close to our home, where it’s supposed to be safe, it’s heartbreaking,” she said.

Bruce said someone brought one of the injured band members into his store and watched over him until his mother came.

“They were just people who were on the street, who just jumped in to help out,” he said.

People were showing up, yelling to those inside for their loved ones, he said.

“The people here were very much willing to help,” he said, including one girl who was bringing out bottled water and directing people to the bathroom. “Just saying, ‘I need to step up; here’s what I can do.’”

A woman and a man who were with the marching band’s booster club were downtown Monday trying to find out if store owners had found any of the band’s instruments or other belongings. The woman declined to give her name but explained to Bruce that several of the band members were in the hospital with serious injuries.

People who live or work near the parade route described the suddenness of Sunday’s event and tragic aftermath.

Mark Constable, 44, who lives at the corner of Wisconsin and Maple avenues, was looking down from his apartment window.

“There were people on this street here screaming that somebody had got hit by a car, something about dead bodies,” he said.

After watching some of the parade with a group of family and friends, John Schegonee, 51, who also lives nearby, walked down to Main and saw people gathered around the injured lying in the street, waiting for ambulances to take them away.

“We saw people just strewn on the ground,” he said, with three or four on one block, six on another. “It was really hard to witness,” he said.

Thousands of people came together later Monday to hear from city and school officials and religious leaders during a candlelight vigil at the city’s Cutler Park, where volunteers passed out bottled water, hot cider and cookies, and therapy dogs were on hand to comfort those in need of it.

Pastor Kris Androsky, of the Brookfield-Elm Grove Interfaith Network, said that while most of the network’s congregations are not in Waukesha, “tonight we are all Waukesha. Tonight we lament with you the trauma and the pain inflicted upon our community.”

Bruce said there will be a “lot of healing that needs to take place,” but “Waukesha on the whole has the ability to do that.”

Three days after Kyle Rittenhouse was found not guilty in the killing of two people and the wounding of a third in Kenosha in a case that’s exposed sharp divisions among Americans on vigilantism, race and other hot-button political issues, Bruce said, “I just think that we need to be kinder to one another.

“We really do,” he said. “I saw some comments on Facebook that want to take this politically in all the wrong directions,” he said of Sunday’s events downtown.

A compilation of some of the bystander videos posted to social media late Sunday after an SUV plowed through the Waukesha Christmas parade.

Republican state Rep. Cindi Duchow said she was reintroducing a constitutional amendment that would change the bail process in Wisconsin to allow judges to consider a defendant’s danger to the community when setting bail.

Prosecutors have charged Darrell Brooks Jr. with intentional homicide in the deaths of five people who were killed when an SUV was driven into a Christmas parade.

This is a developing story that will be updated.

"We've had a lot of people calling in asking if their emotions are normal ... whether that's completely shutting down and not wanting to get out of bed or feeling really numb about it."

Darrell Brooks Jr. faces 77 charges in all, including six counts of homicide and multiple counts of reckless endangerment.

A woman puts up a sign outside City Hall in Waukesha, Monday, a day after an SUV plowed into the city's Christmas parade, killing five and injuring dozens.

Mourners light one another's candles during a vigil in downtown Waukesha Monday. 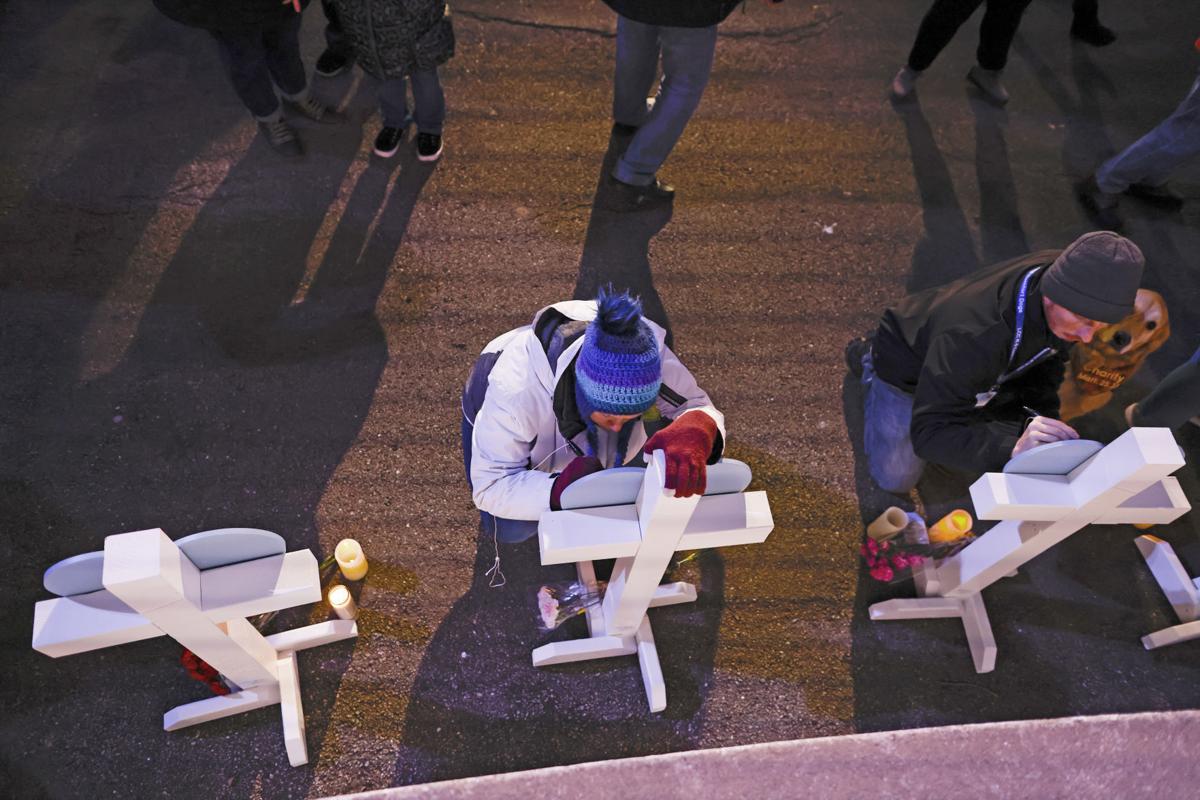 People write messages on crosses before a vigil in downtown Waukesha for those killed and injured Sunday after an SUV plowed into the city's Christmas parade, killing five and injuring dozens.

Items lie in the middle of an empty street Monday in Waukesha, where investigations continue after a vehicle slammed into a holiday parade the day before, killing five people and injuring dozens of others. 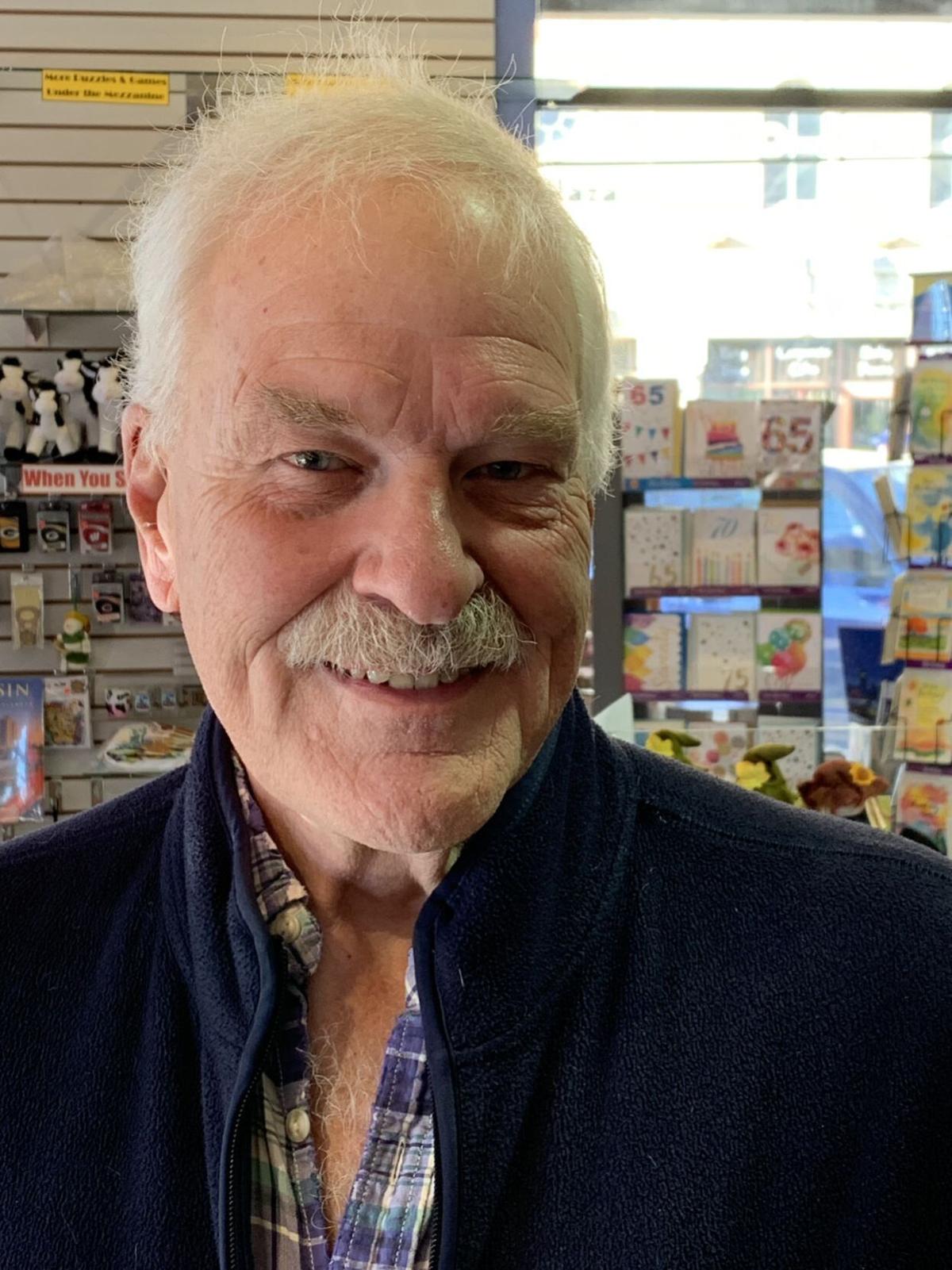