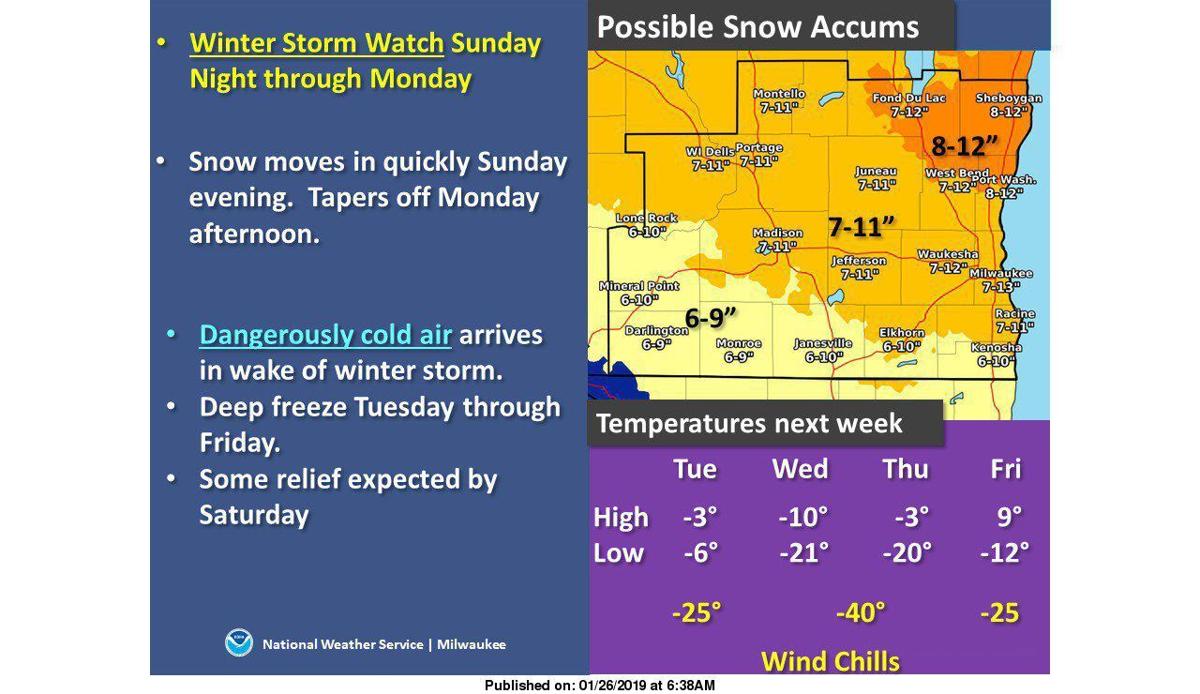 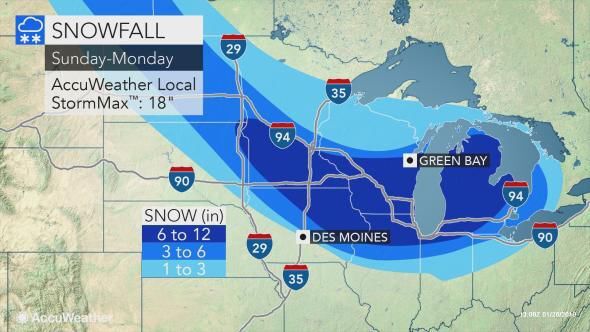 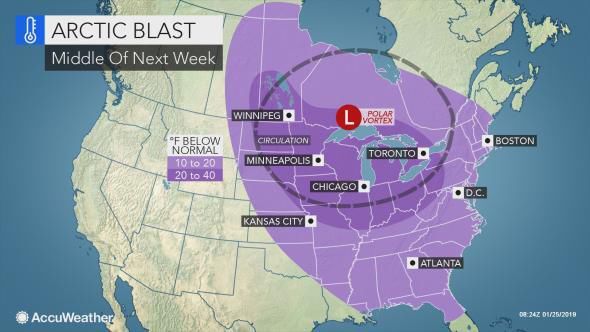 If you’re someone who hates snow and cold, get on a plane or start driving south now.

Southern Wisconsin will see its third big snowstorm of the past couple of weeks Sunday night into Monday, before another “polar vortex” brings the coldest weather in years, according to forecasters.

We’re talking life-threatening cold, with lows dropping colder than 20 below and gusty winds producing wind chill values that could threaten Madison’s all-time coldest wind chill of 54.3 below on Jan. 20, 1985. The coldest actual temperature in Madison was 37 below on Jan. 30, 1951.

Once the temperature dips below zero on Tuesday, it may not get back above zero until Friday, which would be rare for Madison: In records dating back to 1869 there have been just 13 times that Madison went three straight days staying below zero, according to data from the Midwestern Regional Climate Center. The last time was 1996.

"We're going to be feeling it big time," Jeff Masters, meteorology director at the private Weather Underground, told the Associated Press. "It's going to be the coldest air in five years."

Masters said the cold snap is due to the polar vortex — the gigantic circular upper air weather pattern in the Arctic region enveloping the North Pole — splitting into three pieces in late December because of an occasional weather condition called "sudden stratospheric warming."

One chunk of that trapped cold air went to Siberia, another to Scandinavia, and the third piece is heading through Canada. On Wednesday, it will be over northern Michigan, he said.

The polar vortex rarely plunges as far south as the U.S., with the last big plunge on Jan 6, 2014, when Chicago's temperature dipped to minus-16.

But the region first must deal with another snowstorm.

The Alberta Clipper storm will begin dumping snow over parts of the Northern Plains on Saturday afternoon, with the system moving east and south across southern Wisconsin and northern Illinois before heading to the East Coast. The Northeast could see disruptive snow Tuesday and Wednesday, and even the South may see accumulating snow.

"The potential exists for the storm to drop a swath of 6 inches or more, potentially along the corridor from Fargo, North Dakota, to Minneapolis; Green Bay, Madison and Milwaukee, Wisconsin; Chicago and Grand Rapids, Michigan," AccuWeather senior meteorologist Kristina Pydynowski said in a news release. “There can be a dramatic difference between heavy snowfall and then little to no snow and temperatures climbing above freezing over a span of about 50 to 100 miles. The exact track of the storm will determine which areas are hit by or escape the snowstorm."

"The snow north of the storm's track will be powdery, which will help ease the hardships of shoveling amid the frigid conditions," though that also means more blowing and drifting, Pydynowski said.

That would include south-central Wisconsin, which is under a winter storm watch from 6 p.m. Sunday through 6 p.m. Monday, with possible snow totals of 7 to 12 inches, the Weather Service said, adding that the highest totals will be north of Milwaukee, and the lowest southwest of Madison.

Roads could remain in poor winter driving condition because road salt will not work in the bitterly cold temperatures that will follow the storm for several days.

Officially, it was 21 below at 6:53 a.m. Saturday in Madison, as measured at the Dane County Regional Airport. Fortunately, winds were calm.

On Saturday in Madison, there’s a chance for flurries from 2 p.m. through 4 p.m. and snow showers from 4 p.m. through 8 p.m., with increasing clouds, a high near 7 and southwest winds at 5 to 10 miles per hour producing wind chill values of 15 below to 25 below.

Overnight, the low should fall to around 7 below with southwest winds around 10 mph turning out of the northwest after midnight and producing wind chill values of 15 below to 25 below.

The high should be near 10 Sunday, with increasing clouds, and northwest winds at 5 to 10 mph producing wind chill values of 15 below to 25 below.

The Weather Service said snow should fall mainly after 7 p.m. Sunday and before noon Monday in Madison, with possible totals of 4 to 7 inches overnight and an inch Monday

Once the storm exits, no more snow is in the forecast, with skies expected to be mostly sunny Tuesday, Thursday and Friday and partly sunny Thursday.

The Weather Service forecasts highs of near 2 below Tuesday, 9 below Wednesday, 3 below Thursday, before finally rising back above zero to 10 on Friday.

Brown said quiet but bitterly cold weather will follow until the cold snap breaks with a high near 37 next Saturday!

Weather.com isn’t quite as optimistic, but it has the high in Madison near 17 next Saturday and then highs reaching the mid-20s in the following days.

Brown said skies over Madison should be partly sunny to mostly cloudy Saturday and Sunday, cloudy Monday, partly sunny Tuesday and Wednesday, increasingly cloudy Thursday, and partly sunny Friday and next Saturday, with highs near 8, 9. 21, 3 below, 15 below, 1, 12 and 37, and overnight lows around 5 below, 13, 5 below, 23 below, 25 below, 5 below, 17 and 21.

To deal with the bitter cold, local facilities in Madison that accommodate the homeless are staying open longer and are suspending occupancy limits so more people can be taken care of. Availability may be limited, and it is best to call ahead to verify hours and availability.