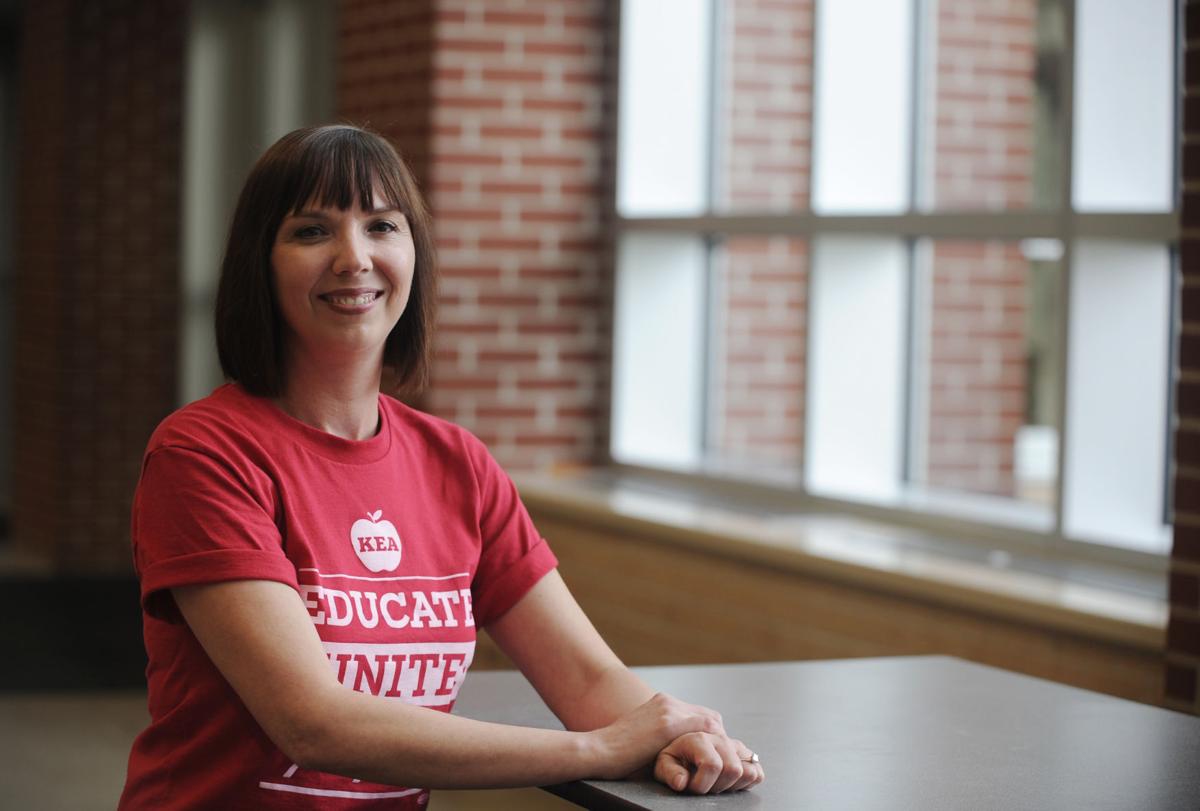 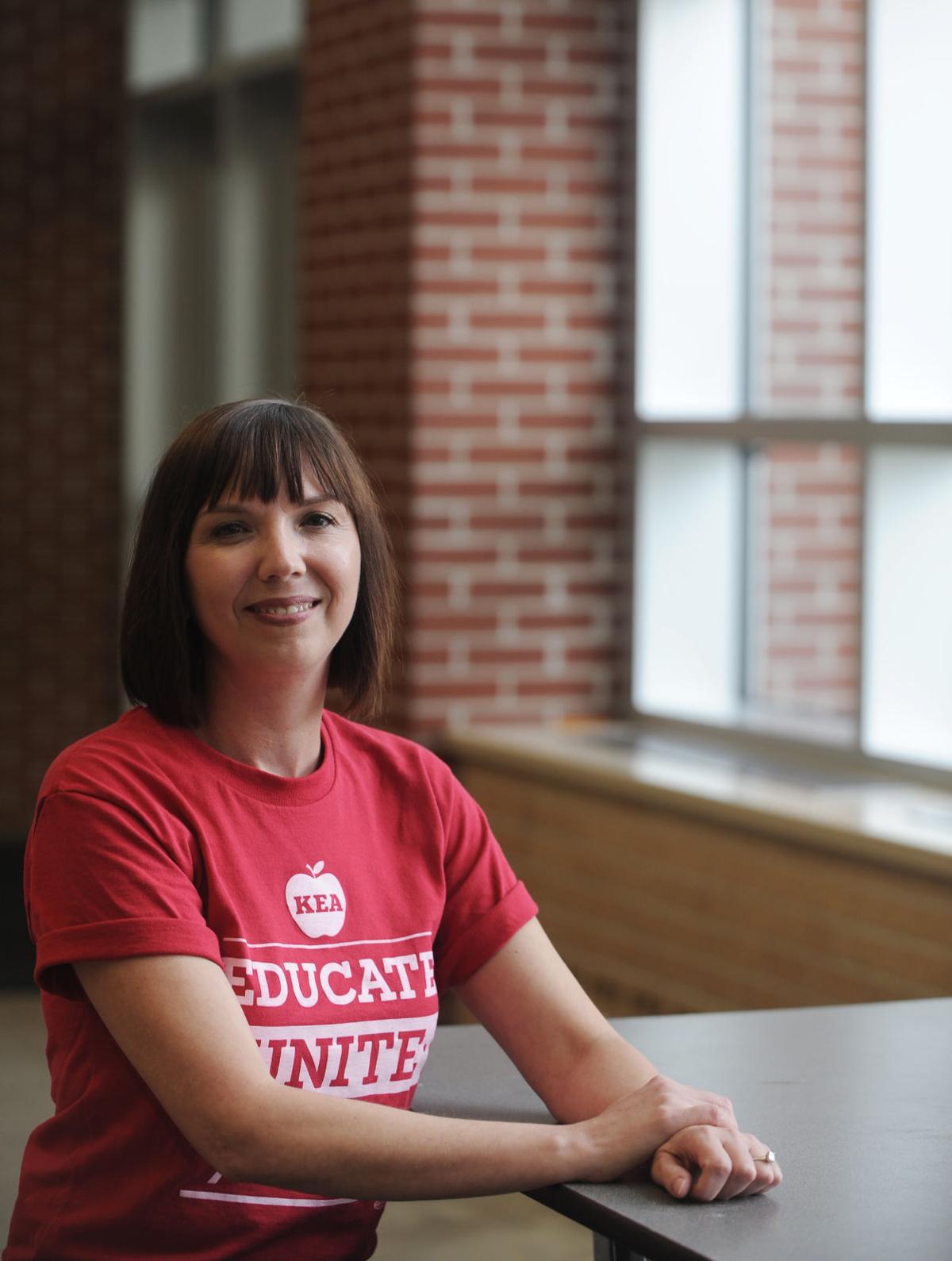 Teachers’ union leaders in Wisconsin’s five largest urban school districts, including Kenosha, are calling on the state to allow schools to re-open this fall with classes taking place in the virtual learning environment instead of buildings. 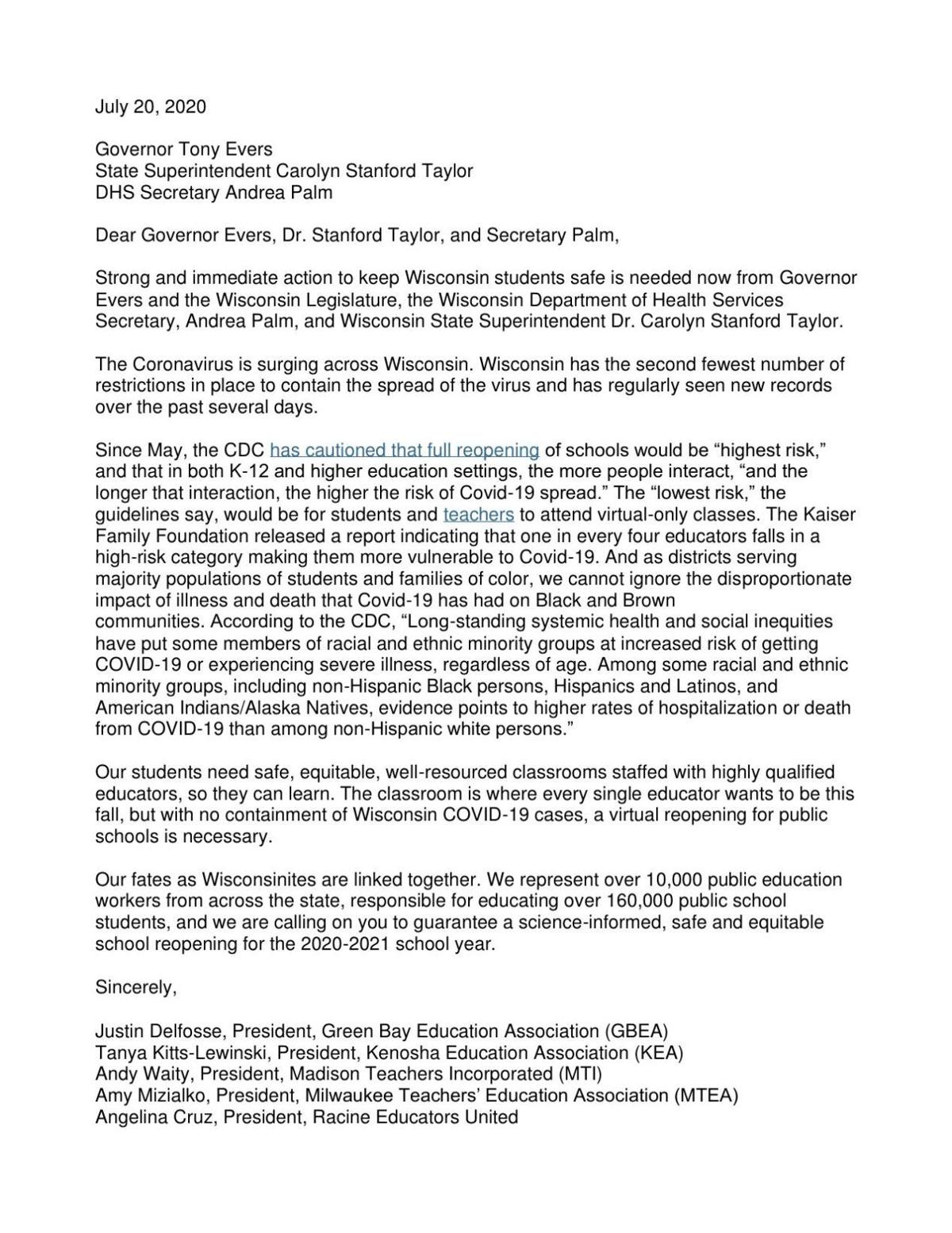 Together the teachers’ unions represent more than 10,000 public education workers from across the state, responsible for educating over 160,000 public school students.

Teachers’ union leaders cited caution from the U.S. Centers for Disease Control and Prevention that reopening schools would be “highest risk,” and that, in both K-12 and higher education settings, the more people interact “and the longer that interaction, the higher the risk of COVID-19 spread.”

The “lowest risk,” the guidelines say, would be for students and teachers to attend virtual-only classes, they said.

The unions deferred to a Kaiser Family Foundation report indicating that one in every four educators falls in a high-risk category, making them more vulnerable to COVID-19 along with the disproportionate effects of illness and death on students of color and their families.

They pointed to the “long-standing systemic health and social inequities” that have influenced higher risk of coronavirus infections or severe illness among those in racial and ethnic minority groups, regardless of their age.

Among some racial and ethnic minority groups, such as non-Hispanic Black persons, Hispanics and Latinos and American Indians/Alaska Natives, evidence points to higher rates of hospitalization or death from COVID-19 than among non-Hispanic white persons, according to the CDC.

In Kenosha Unified, a district survey of parents received 8,674 responses, with 72% preferring in-person learning to virtual learning. At a presentation last Thursday, district teams planning for the re-start of school in September made the recommendation that students in elementary and middle schools be allowed a choice of either starting school in-person or in a virtual environment, but not a combination. They would also have to make a yearlong commitment to their preferred learning environment, according to the plans.

At the high school level, according to the proposal, students starting the year in-person would go to school in their respective buildings four days a week with one day of virtual learning on Friday. High school students choosing the virtual option would learn online five days a week. Like the middle and elementary schools, they also would be required to make a yearlong commitment to either virtual or in-person education.

In addition, the district expects to require masks be worn by all students, staff and anyone who enters a Unified property, and “non-essential” visitors would be limited at those locations. The district’s re-opening plans are expected to be finalized and go before the KUSD School Board for consideration July 28.

Superintendent Sue Savaglio-Jarvis has said the district continues to monitor COVID-19 surveillance data and the latest information of local, state and national health officials and that nothing in the plan would preclude the district closing buildings again and, without hesitation, reverting to all virtual learning for students if the need arose.

Tanya Kitts-Lewinski, president, Kenosha Education Association, sent in this statement this morning on behalf of KEA:

"President Duncan and Members of the Board. My name is Tanya Kitts-Lewinski and I am a Special Education Teacher and President of the Kenosha Education Association. As the elected representative for educators in KUSD, the KEA is calling for a full virtual beginning to the 2020-21 school year with a phased reopening following CDC guidelines. We would love nothing more than to be back in school as normal with our beloved students, but we cannot risk the lives of children, their families, or education workers when it is not safe. As of today, Covid-19 continues to surge in Wisconsin and in Kenosha.

"Elected officials have failed at every turn to contain this virus and now educators are faced with unacceptable choices. Without a massive investment in our public schools at the federal level, our districts are unprepared to support a physical reopening. Our schools have been underfunded for years, and it is educators who fill the gaps. We do more with less. We purchase supplies out of our pockets. We teach without adequate prep time. We go years without a raise. We practice active shooter drills and imagine how we might keep our students alive.

"Now we are being sent into the classroom while a pandemic is surging. Our staff cannot properly address the increased academic, social, and emotional needs of our students upon our return if we are in a constant state of fear because we don’t have the most basic, universal protections in place for educators. When educators are asking questions like: How do I console a crying child or tie their shoes from 6 ft away? Are the schools prepared to have enough support staff available when and if an educator or student dies? What if I test positive and recover but my own child or a student doesn’t survive? How do I live with that? Should I write a living will this summer? What about the risk to the grandparents and great grandparents who are raising our students? These are all real questions posed by KUSD educators.

"And to those who say this is fear-mongering, I point out that at least 74 educators died in New York City from Covid 19- 30 teachers, 28 ESPs, 2 counselors, 2 facilities workers, and 2 administrators. This virus is real and our schools are not equipped to protect us. Which of us are you willing to sacrifice?, The acceptable number of student deaths is zero. The acceptable number of staff deaths is zero.

"It does not bode well for our return, when I have already had to intervene to get staff working in schools this summer basic PPE like masks, hand sanitizer, and wipes. And it doesn’t bode well that our request for a face covering requirement for students and staff has not been incorporated. Our educators are not ok with a middle of the road stance that masks will be highly recommended and not required. That is a political stance, not a stance based in science and public health. The current Center for Disease Control recommendation states: “To reduce the spread of COVID-19, CDC recommends that people wear cloth face coverings in public settings when around people outside of their household, especially when other social distancing measures are difficult to maintain.”

"And now, the message seems to be we will hold school in person this fall at any cost. We will not be pitted against our families and the communities we serve because make no mistake this is about them too. As a district serving a majority population of students and families of color, we cannot ignore the disproportionate impact of illness and death that Covid-19 has had on black and brown communities. When making decisions, we must consider who will be most impacted and protect those most vulnerable among us. To do anything less is negligent.

"In closing, I implore you to begin the school year virtually for all. Allow educators to put aside worry and focus on preparing for high quality online instruction. When it is safe, according to CDC guidelines, return educators and students to the classroom with a face covering requirement and a plan to meet social distancing requirements. The decisions you make now may be a matter of  life and death."

COLLECTION: The road to reopening at KUSD: full school board coverage

COLLECTION: Virtual learning in the Kenosha area during COVID-19

Since COVID-19 hit the United States with its first major outbreak in mid-March, discussions have focused on the level of safety in having stu…