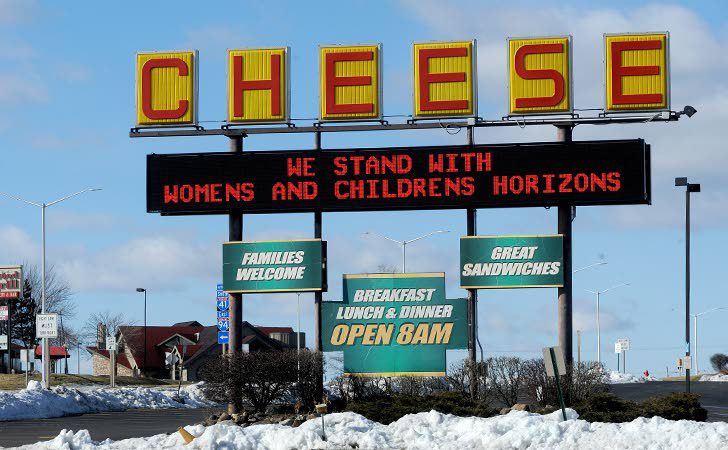 The Brat Stop marquee addresses the pro-rape group that was scheduled to meet in the business\' parking lot on Saturday. This and other gatherings worldwide have been canceled. 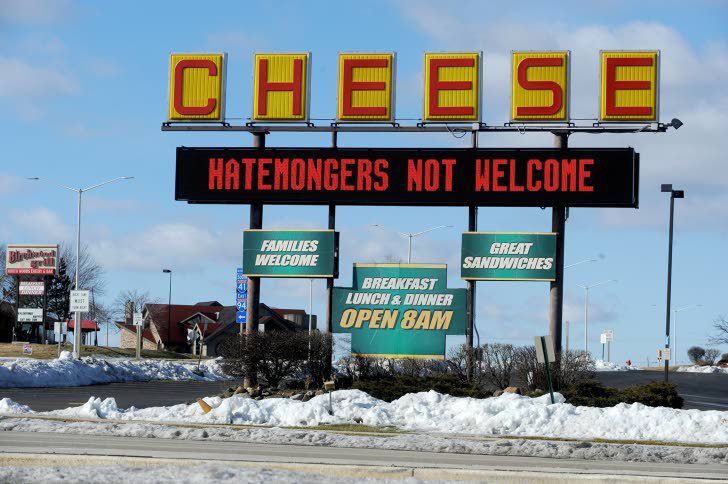 The Brat Stop marquee addresses the rape group that was supposed to meet on the property.

The Brat Stop’s sign makes it clear just who should come through the door.

And this week, it also told certain people to stay away. “HATEMONGERS NOT WELCOME,” said the scrolling, glowing marquee. And “WE STAND WITH WOMEN AND CHILDREN’S HORIZONS.”

The recent addition came after restaurant management heard that followers of the Return of Kings neomasculinity blog planed to use the Kenosha business’s parking lot on Saturday as a collecting point to gather interested men — so long as they were heterosexual and at least 21 years old — and direct them to the real, secret hangout spot.

Return of Kings supports and advocates beliefs including:

— Men will opt out of monogamy and reproduction without incentives to engage them.

— The elimination of “traditional sex roles and the promotion of unlimited mating choice in women unleashes their promiscuity and other negative behaviors that block family formation.”

Brat Stop, community responseRon McGill, operations manager of the Brat Stop, told the Kenosha News that as soon as they were made aware of the meetup location, they got to work trying to stop it.

“We certainly do not condone their behavior of beliefs,” McGill said.

The restaurant was not hosting the meetup, he said, or supporting the group’s use of its parking lot.

And people were happy to see the Brat Stop take a stand.

“I was thrilled to see how the owners and managers stepped up and said ‘Not in this town,’” said Women and Children’s Horizons Executive Director Beth Ballo. “That was really reinforcing to us that he was so quick to say no to that situation.”

Ballo said she finds the Return of Kings agenda despicable.

“It’s so degrading to women, and the effect this has on the women, men and families in the community is just huge,” she said. “It’s counterintuitive to everything the community is asking people to do.”

When Women and Children’s Horizons started 40 years ago, no one talked about domestic violence and sexual assault, she said.

“Communities have come together and said this is our problem,” she said.

A group like this, with a public event, she said, goes against that.

“For a group to bring that to a community is insulting and degrading,” she said. “Their mission statement in a sense is just counter to community belief and a community’s moral compass.”

The sign change Wednesday night was one highly visible way to make it clear to anyone who may have tried coming Saturday night, that they should just stay away.

The Kenosha meeting was listed on a Return of Kings page, one of 165 meetings in 43 countries. At each location, a host was going to be available from 8 to 8:20 p.m., to answer a coded question — “Do you know where I can find a pet shop?” — with the location for the meeting.

Meetings canceledValizadeh published the locations of all the meetings on Return of Kings, and as soon as people learned what was happening, they got to work to stop it. People organized counter-protests and contacted police agencies, and the private businesses that were listed — like the Brat Stop — to try to get the events canceled.

And on Wednesday night, Valizadeh changed course. He canceled all the meetups, saying he “can no longer guarantee the safety or privacy of the men who want to attend on Feb. 6, especially since most of the meetups can not be made private in time.”

The Brat Stop’s sign makes it clear just who should come through the door.

The Brat Stop marquee addresses the pro-rape group that was scheduled to meet in the business\' parking lot on Saturday. This and other gatherings worldwide have been canceled.

The Brat Stop marquee addresses the rape group that was supposed to meet on the property.