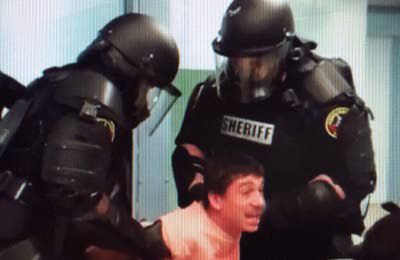 A jail video screen shot shows members of the Kenosha County Sheriff\'s Correctional Emergency Response Team carrying inmate Sean Bialas out of his cell early on the morning of Nov. 7. Newly released video shows how the events unfolded in the incident that left Bialas a quadriplegic. 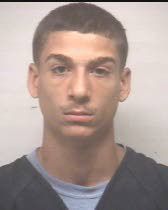 Bialas, 21, suffered multiple fractures of his fifth vertebra during an early-morning cell extraction conducted by the Kenosha County Sheriff’s Correctional Emergency Response Team on Nov. 7 at the Kenosha County Detention Center. He is now a quadriplegic and living in a rehabilitation facility.

A lengthy outside investigation conducted by the Racine County Sheriff’s Office ruled the incident an “unintended consequence” and cleared the Kenosha County department of any wrongdoing.

The moments leading up to the 4:12 a.m. extraction — the team’s second extraction of Bialas in seven hours — were captured on video and released to the Kenosha News by the Racine County Sheriff’s Office this week. The News also obtained key components of the investigation, including hours of interrogation involving jail staff and inmates.

Shortly before the second extraction, Kenosha County Sheriff’s Cpl. Dirk MacDonald placed the facility on lockdown and notified the Correctional Emergency Response Team, known as CERT. According to the investigation, Bialas was on suicide watch in a high-security cell and refused to return to a restraint chair following a routine break.

During the video footage, MacDonald warned Bialas of the dangers involved in cell extractions and offered numerous chances to avoid the operation. The 6-foot-1, 135-pound Bialas refused orders, prompting MacDonald to order an extraction.

MacDonald, a 16-year corrections veteran, requested hand-held video to be used during the operation, in addition to the numerous wall-mounted surveillance cameras.

“I had a sneaking feeling it wasn’t going to go well,” said MacDonald during the investigation. “I’d like to think (Bialas) is going to be reasonable, and he basically told me to go have sex with myself. I backed out, put the building on lockdown and assembled the team.”

The six-member extraction team was outfitted in full body armor. Each member is assigned a specific duty and focuses on containing an area of the inmate’s body. Two front members enter with large pads, followed by the team leader, two members assigned to the legs and a weapons member.

Bialas was pepper sprayed through a food slot shortly before the team burst into the cell. Officer Thomas Larson was the first to enter the cell and performed a “vertical stun” on Bialas, pinning him against the back wall and taking him to the ground.

According to the investigation, Larson said it was his first CERT extraction and the first time he’d ever executed a vertical stun. Larson has worked at the detention center since 2007.

“I did what I thought I was trained to do,” said Larsen, during the investigation. “We’re trained to go in 100 percent because we don't know what he's going to do. I waited for my partner next to me and went forward.”

“All I heard was boom, boom, boom,” said Braithwaite, who is serving a life sentence for murder. “Everybody that went in there was big as hell. Larson is like 300 pounds. They come and use excessive force on people all the time. I’ve been here two years and four months. I'

Barn collapsed the day after being installed on property, killing Iowa father and son

“What everybody needs to know is that Andy was so overly cautious with anything with his kids,” a neighbor said. “There’s no way if there was any danger that Andy saw that he would have had his kids anywhere near it.”

PLEASANT PRAIRIE — A new roundabout soon will be coming to a village street near you.

Man gets lifetime ban from driving, prison time for latest in series of OWI convictions

At his sentencing this week, the judge told Michael Hess it did not appear that he was able to learn from his mistakes.

An effort to ease parking woes along Kenosha’s lakefront, especially at Simmons Island, appears to be working. Thanks to a creative solution, …

A jail video screen shot shows members of the Kenosha County Sheriff\'s Correctional Emergency Response Team carrying inmate Sean Bialas out of his cell early on the morning of Nov. 7. Newly released video shows how the events unfolded in the incident that left Bialas a quadriplegic.