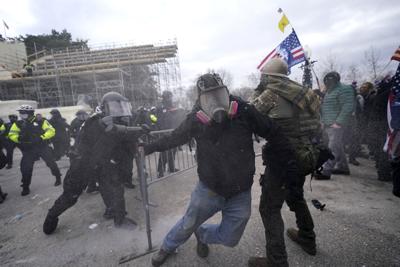 As violent rioters stormed the Capitol building, trying to stop the ceremonial counting of electoral votes that will make Joe Biden the next president, Gallagher posted a video on social media while sheltering in his Capitol office. The Secret Service had evacuated Vice President Mike Pence from the Senate chambers. A woman was shot inside the Capitol and later died. Capitol police were in armed standoffs and struggled to control the pro-Trump rioters for hours.

He was absolutely right. Wednesday’s chaos — incited by Trump at a rally that preceded the Capitol melee — was an embarrassment and disgrace for our country.

Trump subsequently released a video urging his supporters to be peaceful and disperse — but not before repeating his false claims that the election was stolen from him.

No, it wasn’t. And it doesn’t matter how many times Trump says he won, he definitively lost — fair and square.

Even Senate Majority Leader Mitch McConnell, R-Ky., long a Trump apologist, finally had enough of his own Republican president’s rantings about fraud. Before Trump’s mob arrived, McConnell declared on the Senate floor that the race for president wasn’t “unusually close” and that Biden had prevailed.

“If this election were overturned by mere allegations from the losing side, our democracy would enter a death spiral,” McConnell said.

Gallagher was sharper in correctly faulting those in his party who continued to play along with Trump’s dangerous ruse. Though Gallagher didn’t mention them by name, U.S. Sen. Ron Johnson, R-Oshkosh, and U.S. Rep. Tom Tiffany, R-Minocqua, were part of the reckless band of congressmen who initially planned to object to certifying Biden’s win Wednesday.

Gallagher said the objectors had assured him nothing bad would happen by debating the legitimacy of the election. They were wrong, as Wednesday’s deadly tumult showed.

“This is the cost of countenancing an effort, by Congress, to overturn the election and telling thousands of people that there is a legitimate shot of overturning the election today — even though you know that is not true,” Gallagher said to the objectors.

He was absolutely right again. The madness must end.

Kenosha News editorial: Ryan and Pence help the cause of democracy

While there has been ample press and commentary in recent days and weeks about who is skipping tomorrow’s inauguration, we thought it notewort…

Kenosha News Editorial: Kenoshans line up to show love their for Oliver's Bakery

It’s a story that could probably only happen in the era of social media and a global pandemic. And in Kenosha.

Every now and then when we read about a piece of proposed legislation our immediate reaction is: “Oh, no — oh, hell no!”

WHAT OTHERS SAY: Legal weed a booming business

The people of Illinois may be suffering from a coronavirus hangover that just won’t go away, but sellers of legal marijuana appear to be thriving.

Kenosha News editorial: Honoring the Republicans who stood up

Reassuring as condemnations might be from the likes of Missouri Gov. Mike Parson, Sen. Roy Blunt and Rep. Ann Wagner, they are much too little…

In many circles, the choice of Janet Yellen to lead the Treasury Department under the administration of President-elect Joe Biden was met with…