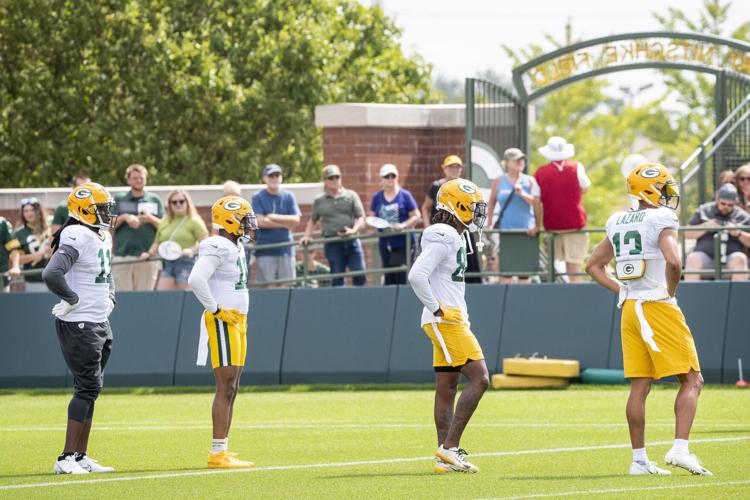 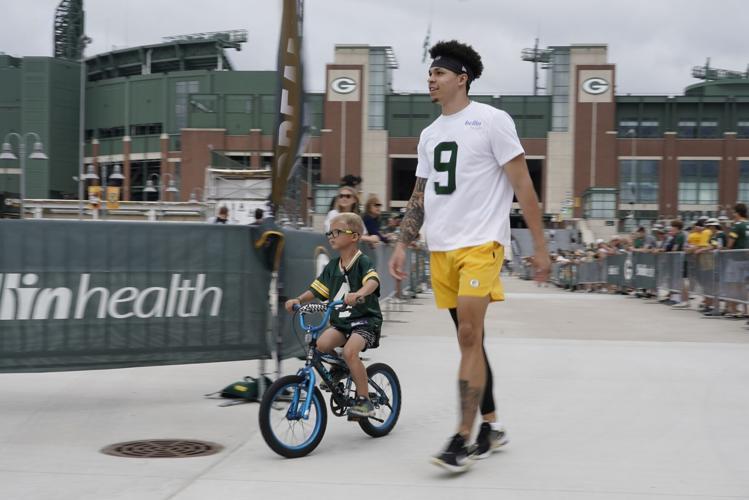 GREEN BAY — While Aaron Rodgers has never been one to shy away from a challenge, that doesn’t mean the four-time NFL MVP quarterback wouldn’t rather avoid them if possible.

Like, say, when the Green Bay Packers’ wide receiving corps goes from boasting arguably the best in the business in Davante Adams to having a largely unproven and youthful group.

And so, when Rodgers was asked on the first day of training camp whether he enjoys the challenge presented by the new dynamic at the position — and the lack of a proven No. 1 target — his answer was … unambiguous.

“Um … no, to honestly answer your question. The answer is no,” Rodgers replied as he spoke to the gaggle of reporters surrounding his locker. “When you walk in the locker room for so many years and you see Jordy Nelson’s locker over there, you see Davante Adams’, it gives you a different feel. You just know you’ve got that guy.

“We have some opportunity for some guys to kind of step into that role. Obviously (Adams) as a rookie wasn’t what he was when he left. Jordy Nelson as a rookie was returning kicks and I think he had two (receiving) touchdowns. … Most guys kind of worked into what they became.”

“With Christian and Doubs, I think we’ve got to have patience with them,” Rodgers continued. “But who I don’t think we need any patience with is Allen. I really think Allen is ready to make a jump and be a No. 1 receiver, and I’m excited about the opportunity to work with him,

“There’s a lot of question marks, and we’ll try and answer those in the next five weeks.”

As the Packers kick off Week 3 of training camp in advance of Friday night’s preseason opener at San Francisco, here’s a snapshot of where Rodgers’ search for answers at receiver stands:

After setting career highs in every statistical category a year ago (40 receptions, 513 yards, eight touchdowns), Lazard is poised to inherit a significant number of the departed Adams’ 169 targets from last season and be the first read for Rodgers on far more plays than in the past.

If Lazard — after going undrafted coming out of Iowa State, spending 2018 on the Jacksonville Jaguars’ practice squad and getting cut at the end of training camp in 2019 by the Packers — is feeling the pressure, he’s not showing it and has had a strong camp thus far.

“My biggest urgency was 2018 when I first came out. I was undrafted. I was on the p-squad. I wasn’t sure if I was going to have a job tomorrow,” Lazard said. “When I compare it to that, I don’t say I have (more) urgency now. I understand with the time I’ve been putting in, it will eventually come back and be worth it.”

The rookie fourth-round pick from Nevada has been the story of camp so far on the offensive side of the ball, making at least one “Wow play” (Rodgers’ words) each day. He had another nice play on a deep ball from Jordan Love during Family Night, but he’s not infallible, as he showed when he dropped an on-the-mark deep ball from No. 3 quarterback Danny Etling. Still, he will be among the must-watch players against the 49ers.

Asked what has stood out to him about Doubs, Love replied, “Just the way he’s catching the ball. He’s making those contested catches and those tough plays, and he’s making it look easy. And it’s not easy to do.”

After starting camp on the non-football injury list because of some discomfort in his hamstring, Watkins’ workload has gradually increased. While he’s still getting acclimated to the offense, he’s looked more comfortable of late. He had one of the No. 1 offense’s few highlight plays on Family Night, reeling in a 26-yard pass from Rodgers against Eric Stokes, setting up a 2-yard AJ Dillon touchdown run.

“You see a lot of young guys out there making plays, running around, you see guys stepping up,” Watkins said. “My job is on the line. I’ve got to go out there and compete and get better.”

Now in the second year of his second stint with the team, Cobb, who turns 32 later this month, clearly knows how to pace himself heading into a 17-game regular season. He was playing his best ball of the year when he underwent surgery to repair a core muscle injury last December, and when healthy, he is Rodgers’ security blanket on third down.

“Every year is different, and you’ve got guys who step up in different ways,” Cobb said. “I’m competing to play, too. I’m not just out here to be here. I’ve still got aspirations and things I want to do this season.”

Admittedly disappointed in his rookie season, when he caught only four passes and was inconsistent as a returner, Rodgers rededicated himself in the offseason to being in better shape and is down 15 pounds. While big plays have been few and far between, he had some good reps in 1-on-1 cornerback/receiver drills last week and seems to be trending in the right direction.

“He did a great job this offseason getting into a different kind of shape,” general manager Brian Gutekunst said. “I never thought he was not in shape, but he was a bigger, had more weight on him last year. With Amari, I just think it’s opportunity. The more opportunities he gets, the more you’re going to see him kind of come out of his shell and really produce.”

While comparing him to Adams would be unfair — not to mention unrealistic — Winfree moves like Adams and is similarly built. (Both are 6-foot-1, and Adams is 5 pounds heavier than the 210-pound Winfree.) But there’s a canyon between looking like someone and playing like him, and Winfree, after a nice catch from Rodgers on a sideline ball on the first day of camp, is aiming to make more plays to improve his roster resume.

“I see a big chance and opportunity for myself,” said Winfree, who has played in 12 games in three years, spending most of his time on the practice squad. “Just being here and already being in the system, learning what the expectations, I feel that there’s a lot of room for opportunity. This team’s eager to find new playmakers and guys that are going to step up and show they’re ready. And I just want to be one of those guys.”

The rookie seventh-round pick spent the first two weeks in Doubs’ shadow, but his 54-yard touchdown catch on a deep ball from Love during Family Night got everyone’s attention. Now, it must serve as a springboard to more playmaking.

The ex-University of Wisconsin standout has been the definition of quietly having a good camp. An undrafted free agent, he’s unfazed about going up against three fellow rookies who were draft picks, and both the starting quarterback and the head coach have pointed out his steady improvement.

The first wide receiver the Packers picked in the draft will be the last one on the field, having undergone arthroscopic right knee surgery following the offseason program. No timetable has been given for his return to practice, so it’s possible that he’ll stay on the physically unable to perform list and perhaps even start the regular season there.

“It’s definitely frustrating, but I’ve tried not to let that affect me too much,” Watson said. “So I try to look at positives and kind of stay away from the negatives. But obviously it’s frustrating not being able to be out there and have those opportunities to obviously create that connection with ‘12.’”