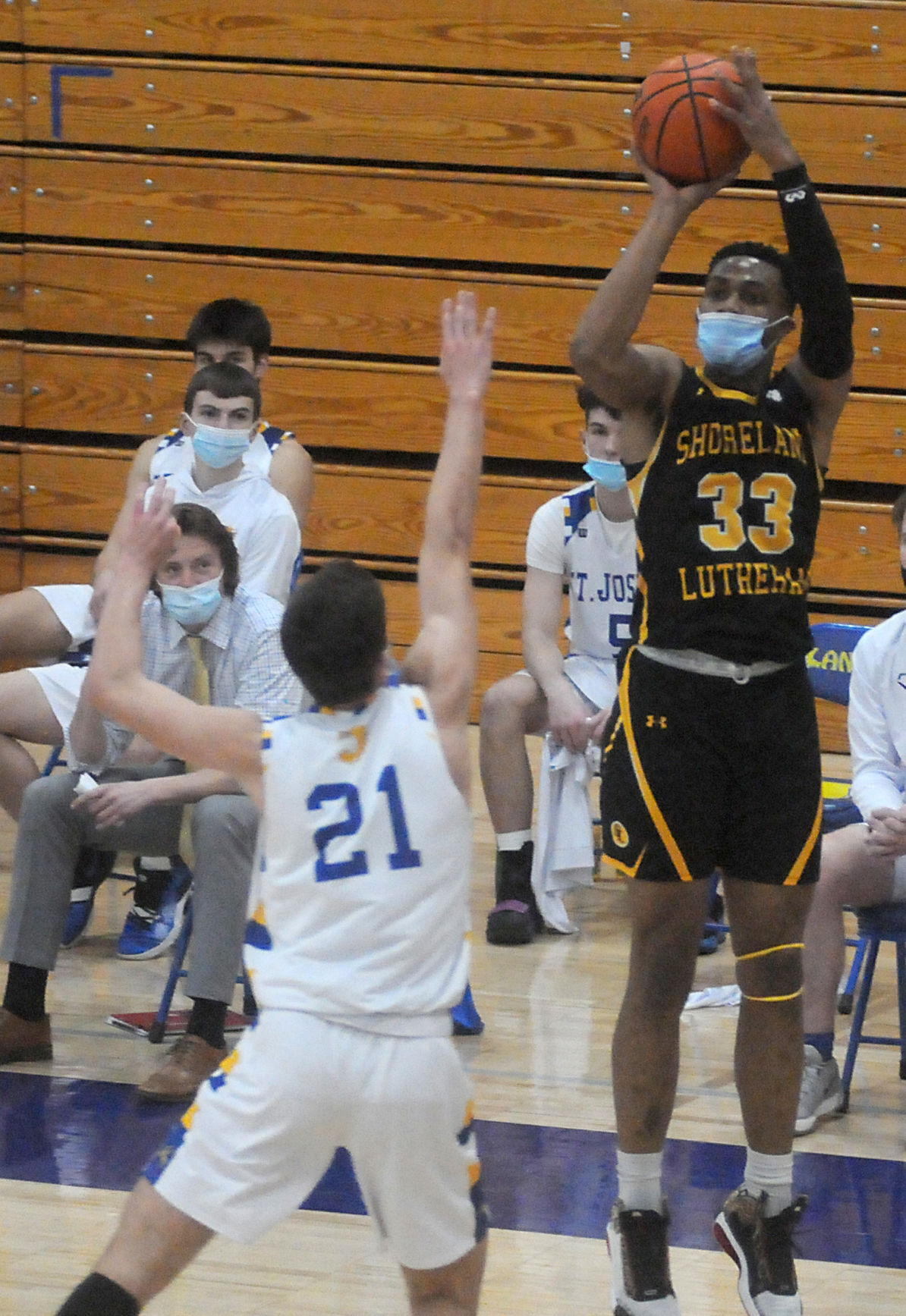 Shoreland Lutheran senior forward Quentin Bolton shoots over St. Joseph junior wing Andrew Alia during a Metro Classic Conference game this season. Bolton and Alia both reached the 1,000-point mark for their careers during the season, and both were named to the first team of the 57th annual Kenosha News All-County Boys Basketball Team. 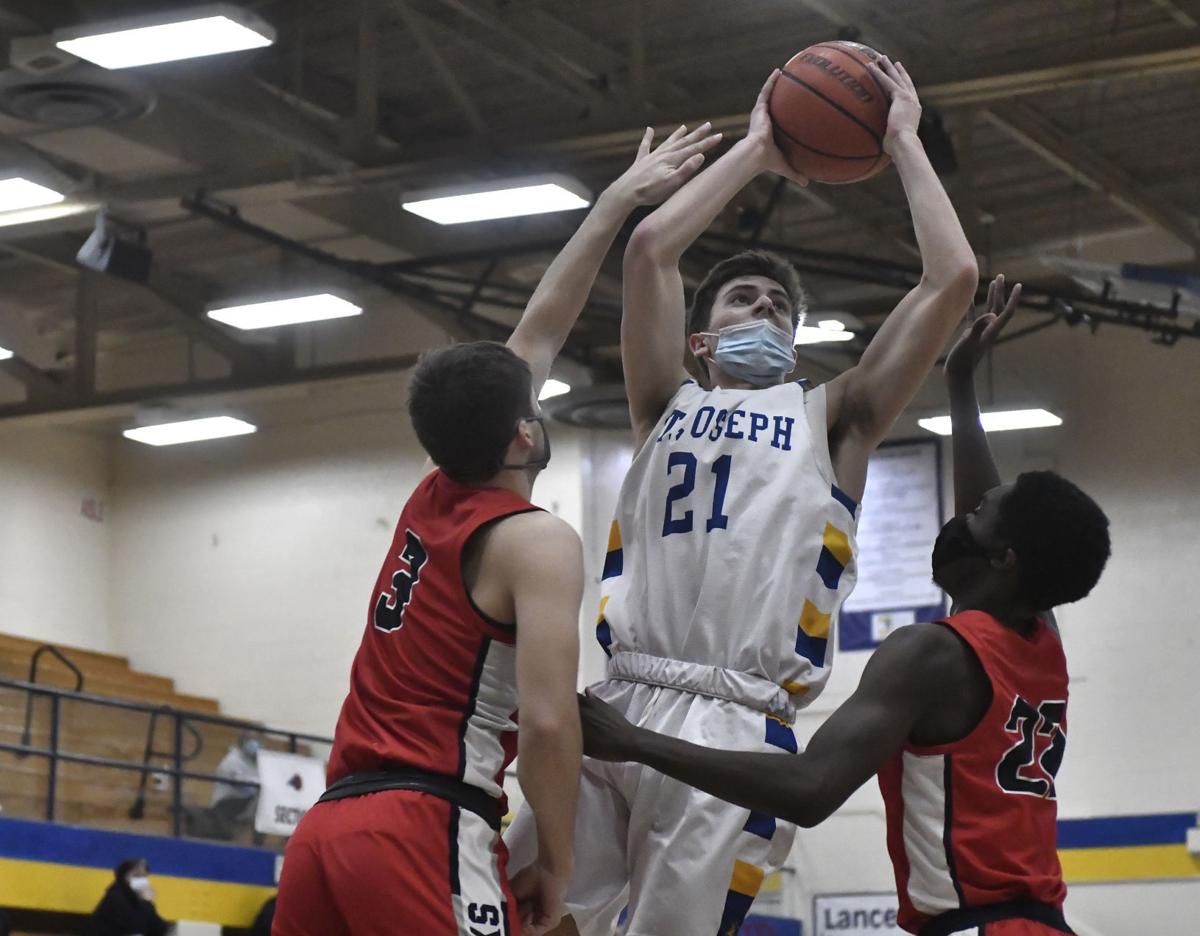 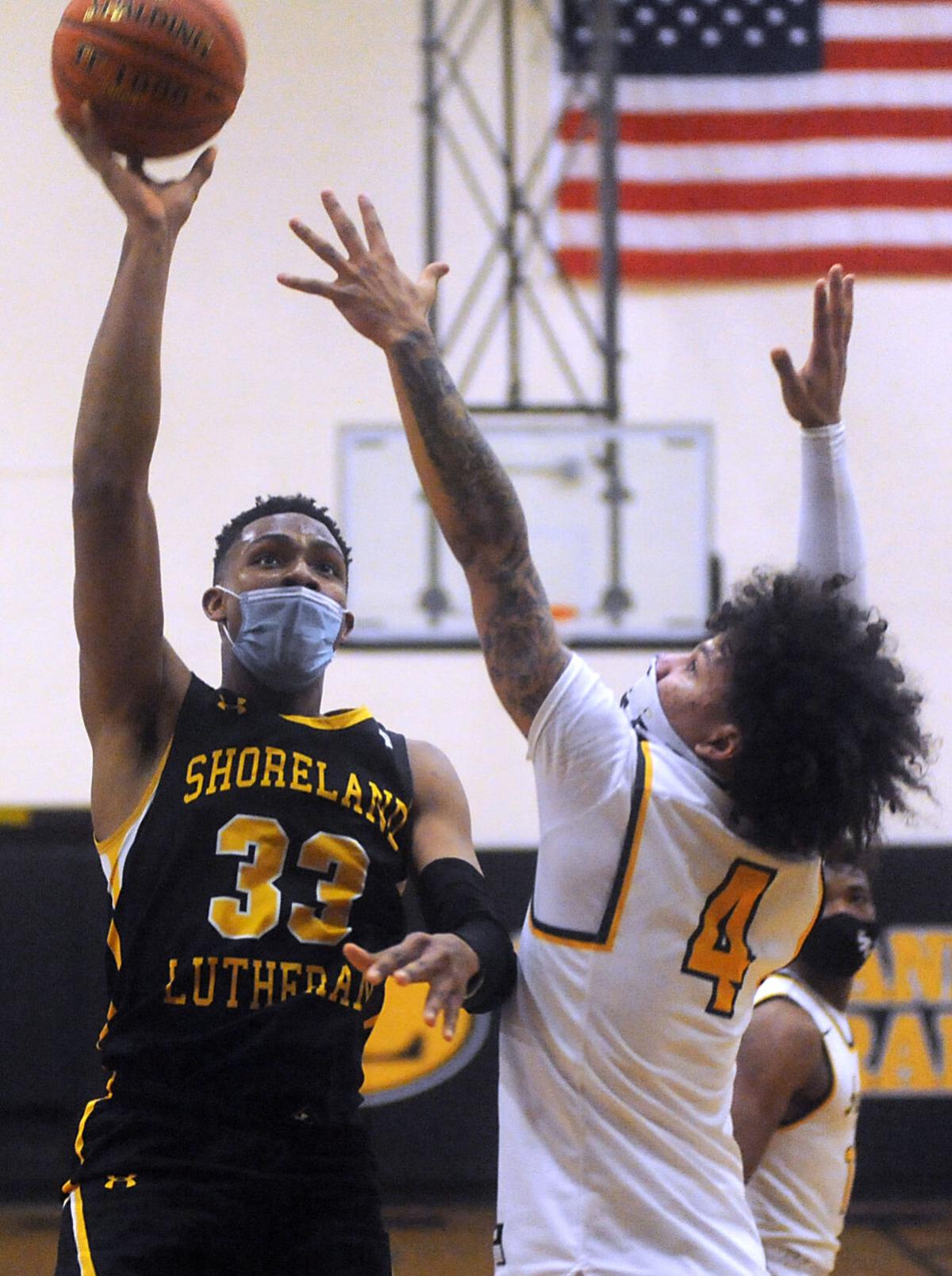 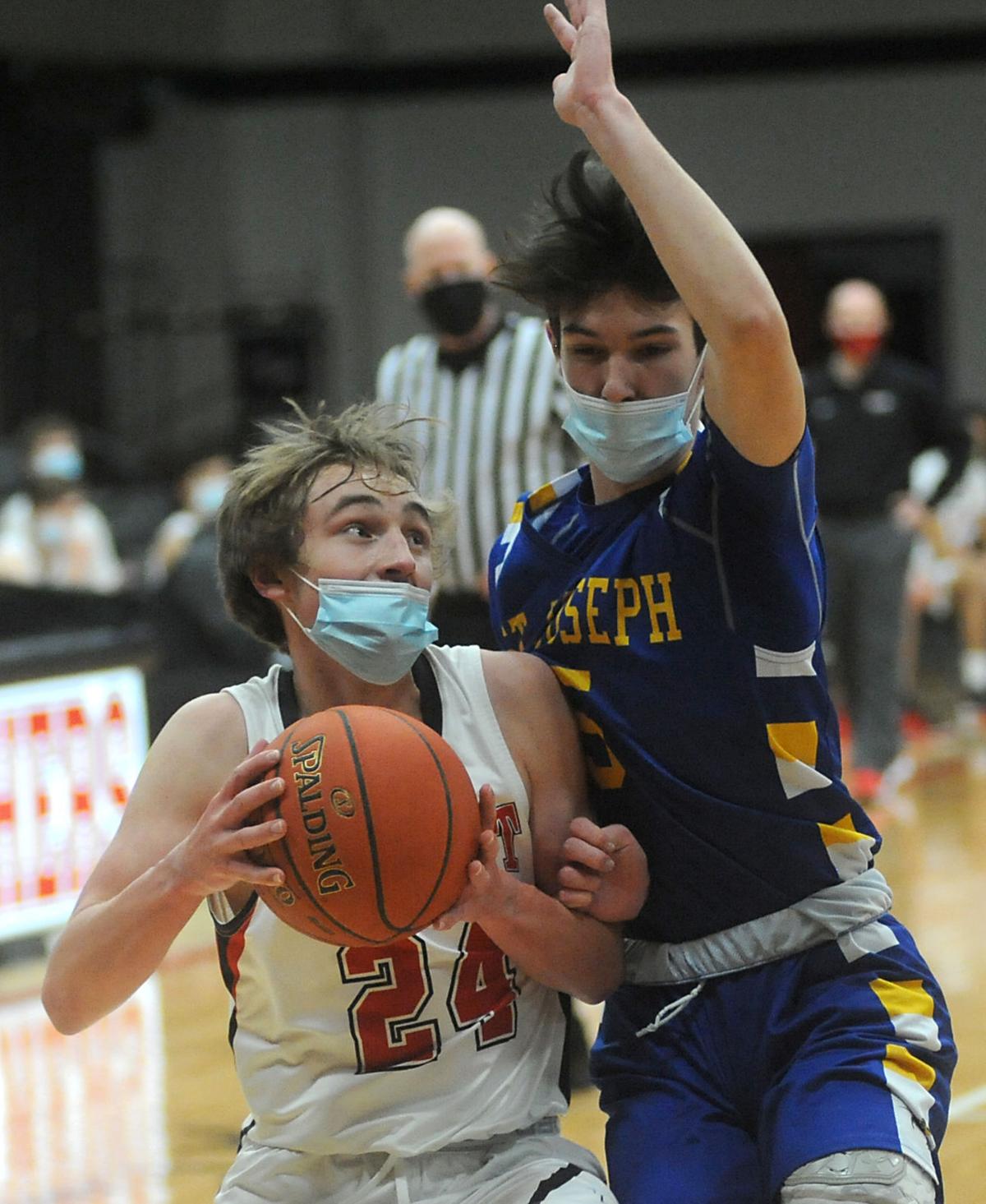 Wilmot’s Kevin Sandman drives to the basket against St. Joseph's Jacob Ashmus during a non-conference boys basketball game this season at Wilmot.

That proved to be true this season for Shoreland Lutheran senior Quentin Bolton and St. Joseph junior Andrew Alia.

Bolton, Alia, Rose and Sandman all surpassed the 1,000-point mark for their careers this season.

Bolton, a 6-foot-7 forward, put up monstrous numbers, especially during the latter portion of the season. He finished second in the Metro Classic with 20.7 points per game and first with 11 rebounds per game.

He had a 30-point, 20-rebound game against Racine Lutheran on Jan. 30 and a 41-point, 17-rebound performance against St. Thomas More on Feb. 2. Over the Pacers’ final 10 games, Bolton averaged 26.2 points and 13.5 rebounds per contest and also became the program’s all-time leading rebounder.

“The biggest growth with Quentin has been, he really has worked on his game and his outside shooting,” Shoreland coach Paul Strutz told the News this season. “For a big guy, he shoots the ball exceptionally well. But now, combining that with also going to the basket and knowing when to do each. If a guy plays off him, he’s going to stick the jumper. A guy’s up on him, he can go to the basket.

Alia, meanwhile, averaged 19.3 points per game in his third full varsity season for the Lancers, which ranked fifth in the Metro Classic. A 6-3 wing player, Alia was a consistent scorer this season, as he scored at least 16 points in all but two games, one of which he left early with an injury.

Alia’s season-high was a 29-point effort against Palmyra-Eagle on Jan. 9, the game in which he reached 1,000 career points.

“He’s a great kid,” St. Joseph coach Jose Garcia told the News a night prior to that game. “He’s a hard worker, and he’s one of our best offensive players. So we run things through him when teams play man. We try to get him open looks.

“... He makes good decisions. He’s a great scorer, and we use him to our advantage every night.”

Alia was named first-team All-Metro Classic and Bolton was named to the second team when the All-Conference teams were announced.

Rose and Sandman, meanwhile, were both named first-team All-Southern Lakes Conference in addition to their All-State honorable mention selections.

Rose, a 6-4 guard who presents matchup problems for opponents, finished third in the SLC with 21 points per game. He scored 20 or more points 10 times this season for Central and had two games of 30 or more, including a season-high 33 against Milton on Feb. 2.

According to WisSports.net, Rose already has scholarship offers from NCAA Division I UW-Milwaukee, SIU-Edwardsville and Toledo as he goes into the offseason before his senior year.

“We know teams are going to focus on Jack,” Central coach James Hyllberg told the News after an early-season win over Wilmot. “But he’s smart. He has good court vision, and he’s very unselfish.”

Sandman doesn’t match Rose’s size as a 5-10 guard, but you don’t often find a more prolific shooter and pure scorer.

Sandman averaged 23.9 points per game for Wilmot, second in the SLC to only Elkhorn senior Jordan Johnson’s 28.1. Sandman had 12 games of 20 or more points and five of 30 or more. He scored 35 twice, on Jan. 29 against Lake Geneva Badger and on Feb. 16 in a WIAA Division-2 regional quarterfinal win at Waukesha Catholic Memorial.

“I am so very happy and proud of Kevin,” Wilmot coach Jake Erbentraut said after Sandman reached the 1,000-point mark for his career. “He has worked very hard to get to this point and has become a tremendous scorer for us this season.”

Also earning All-SLC commendation among boys in addition to Rose and Sandman were Wilmot senior London Glass and Central junior Kenny Garth, who were both selected to the second team.

Glass also reached the 1,000-point mark for his career this season and finished sixth in the conference with 18.2 points per game, while Garth ranked 10th with 13.1 points per game.

Burlington senior Joey Berezowitz, who became the Demons’ all-time leading scorer this season, was named the SLC Player of the Year.

IN PHOTOS: Images from a St. Joseph vs. Shoreland Lutheran boys basketball thriller

The security guard went on the court during the confrontation and put his hands on Milwaukee's P.J. Tucker.

Central junior Bryan Topercer had quite a day Tuesday in the Southern Lakes Conference Track and Field Meet.

The Tremper baseball team left absolutely no doubt that it would finish off its first regular season in two years with a conference title in hand.

You need to prepare for the heat at this time if you plan to fish during the midday hours.

Unlike Aaron Rodgers and Packers, Russell Wilson and Seahawks have moved past offseason drama

The quiet, mundane nature of Russell Wilson's appearance this week at Seahawks' OTAs is welcome news when contrasted with the cacophony of the quarterback's offseason.

After an apparent computer glitch cost Milton a chance to be in a playoff with Mukwonago for a state golf berth, the WIAA changed its decision Wednesday to allow the playoff.

The Tremper baseball team will play for a share of the Southeast Conference title today.

Shoreland Lutheran senior forward Quentin Bolton shoots over St. Joseph junior wing Andrew Alia during a Metro Classic Conference game this season. Bolton and Alia both reached the 1,000-point mark for their careers during the season, and both were named to the first team of the 57th annual Kenosha News All-County Boys Basketball Team.

Wilmot’s Kevin Sandman drives to the basket against St. Joseph's Jacob Ashmus during a non-conference boys basketball game this season at Wilmot. 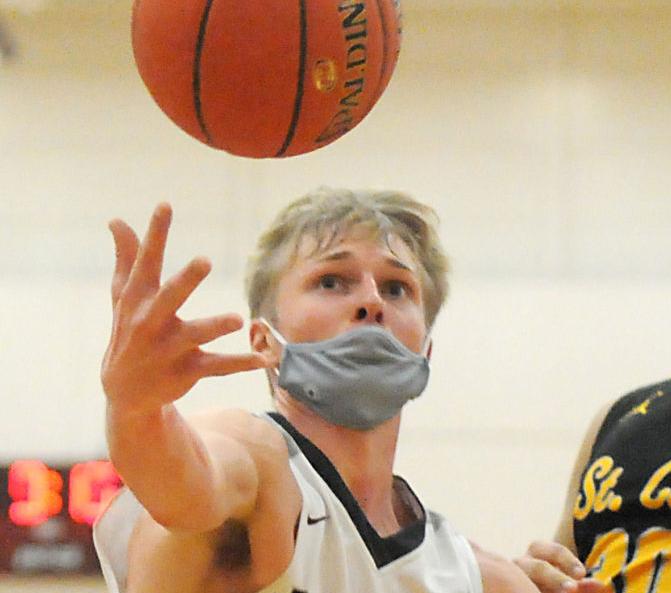