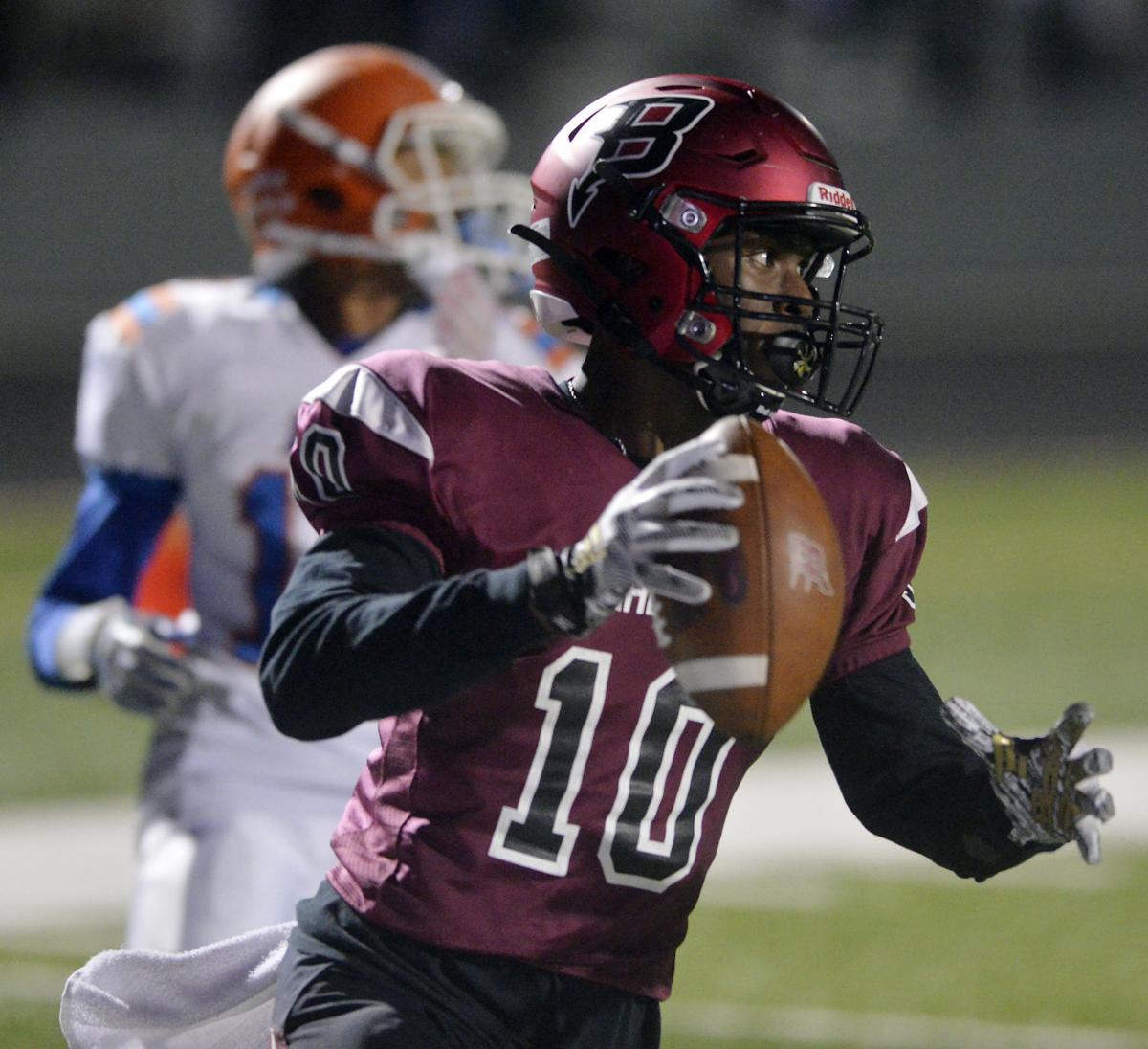 Bradford’s Damarion Williams catches a pass for a touchdown during the first quarter of a Southeast Conference game against Racine Park on Friday night at Bradford Stadium. Williams finished the first half with four catches for 103 yards in the Red Devils’ playoff-clinching victory. 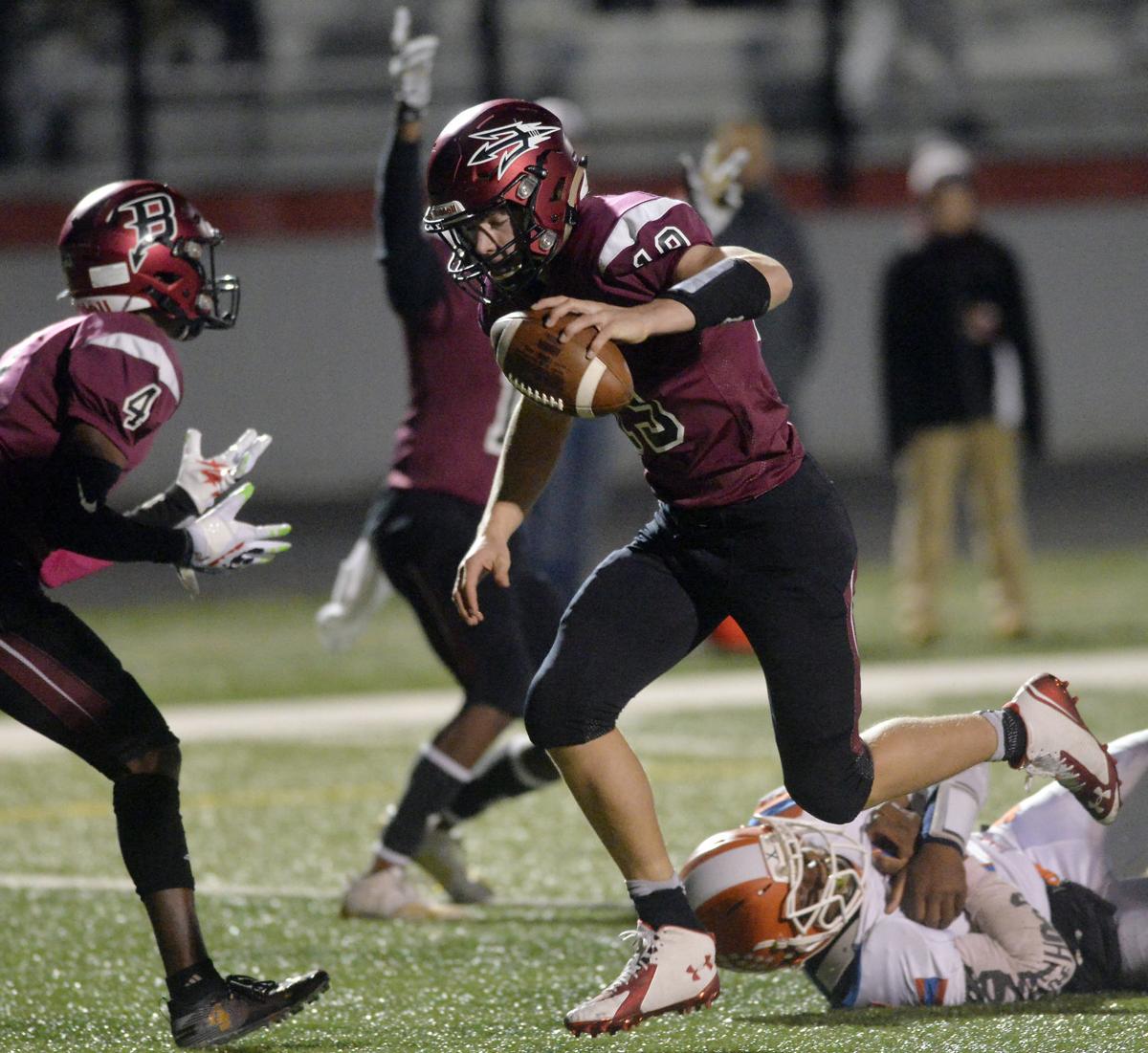 Bradford quarterback Nate Olson runs for a touchdown during the second quarter of the Red Devils’ 37-14 Southeast Conference victory over Racine Park on Friday night at Bradford Stadium. 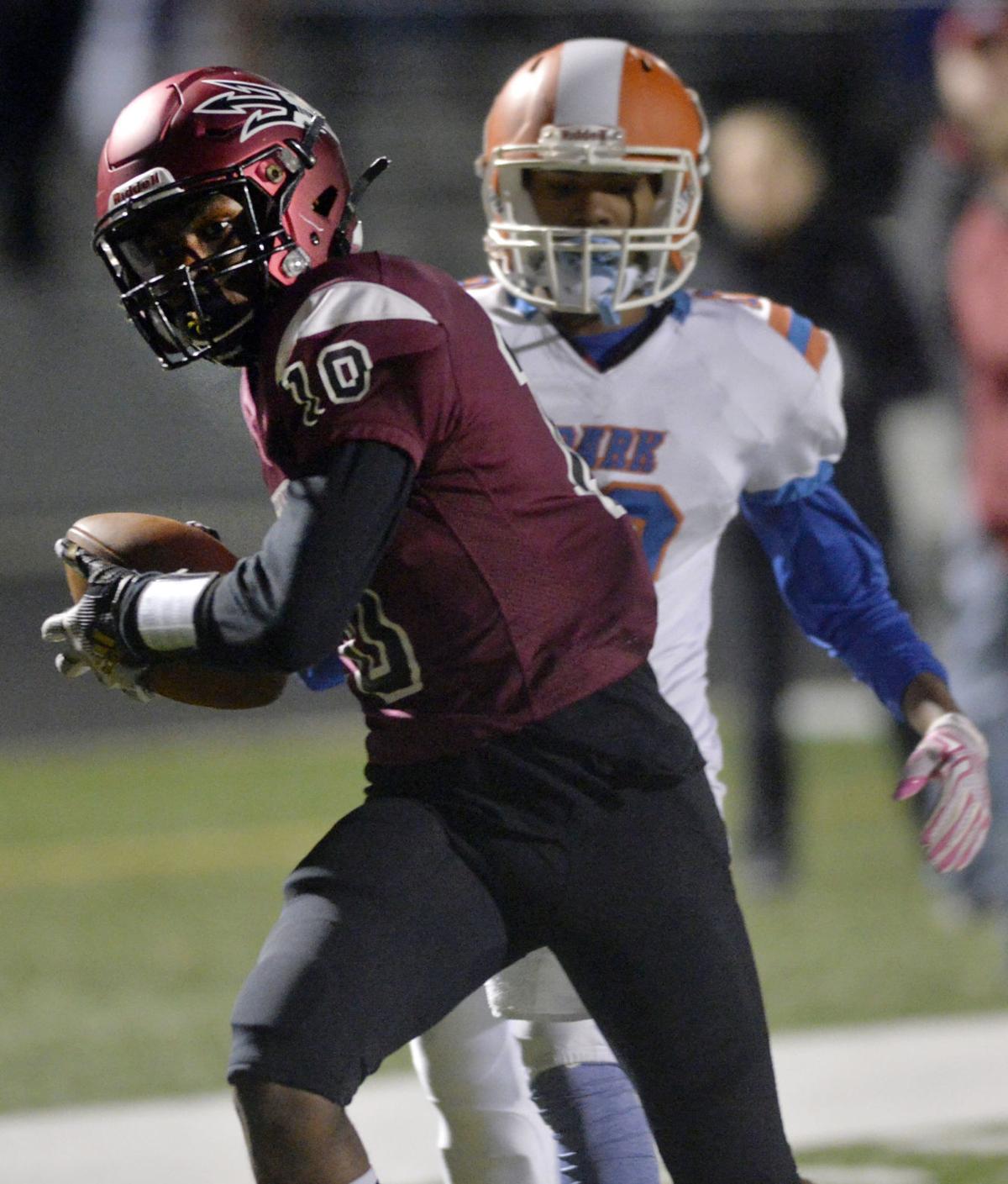 Bradford’s Damarion Williams gets behind the defense for a first-quarter touchdown. 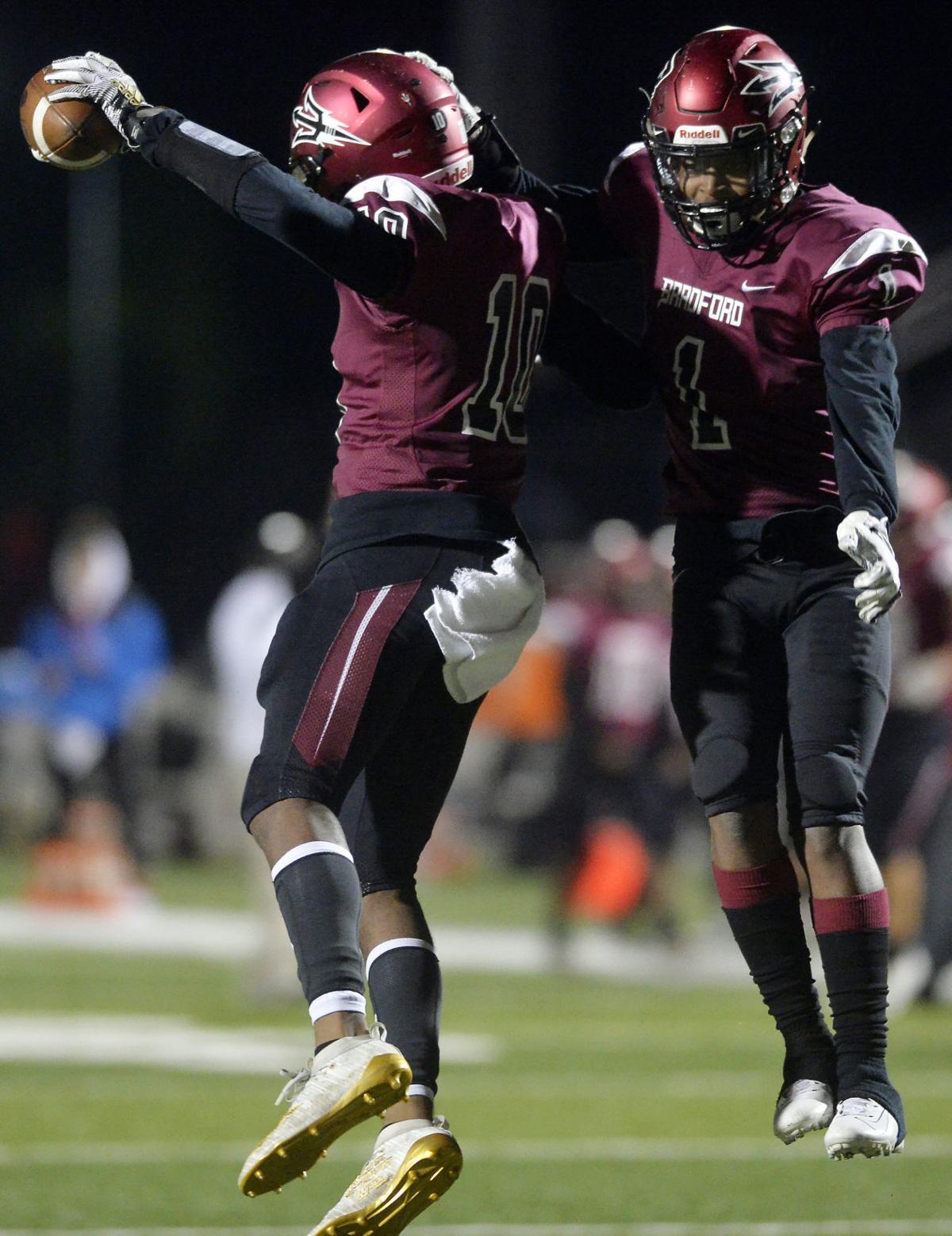 For the first eight weeks of the season, the Bradford football team relied on its defense to keep it in games.

Well, in a regular-season finale with a chance at a postseason berth on the line, the Red Devils finally got the offense they’d been hoping for all season.

Yes, one touchdown came via the defense, but Bradford’s offense put up 30 points en route to an impressive 37-14 Southeast Conference win over Racine Park on Friday night at Bradford Stadium.

The Red Devils hadn’t eclipsed 14 points in any of their first eight games and were averaging just 8.5 points per contest before breaking loose against the Panthers.

“We finally scored some points,” Bradford coach Troy Bowe said. “I think it goes back to our playmakers made some plays, especially early that got us going. (Junior receiver) Damarion (Williams) catches a deep ball, and we kind of started feeding him.

“… And that’s important for us. Our playmakers (have) got to make plays, and we’ve had them all year. We’ve just missed them. … Tonight, it kind of came together a little bit. It’s good for our kids, because it shows them what they’re capable of doing.

The Red Devils will have at least one more game to prove that theory.

Bradford and Park both finished the regular season 3-6 overall, but they each entered Friday’s game with a 2-4 mark in the SEC. It takes four conference wins to guarantee automatic postseason eligibility, but the winner of Friday’s game would at least put itself on the bubble with a third SEC victory.

The WIAA playoff field is comprised of 224 teams over seven divisions, and when the dust settled Friday night there weren’t enough teams with winning conference records to fill out the brackets. Due to a series of tiebreakers, mainly involving the quality of conference victories, Bradford met the criteria to get into the Division-1 postseason field.

It marks the Red Devils’ fourth consecutive playoff berth. Seventh-seeded Bradford will take on host Franklin, a No. 2 seed, at 7 p.m. Friday. The winner will play either No. 3 Indian Trail or sixth-seeded Racine Case.

“I am pretty happy with the win, but I’m not satisfied,” said Bradford senior defensive back Sayge Terrell, who set up a field goal with a 69-yard kickoff return to open the second half Friday and returned an interception 55 yards for a score with 9 minutes, 40 seconds left in the game.

“I want to go to the playoffs, and I want to make a run for it. I believe we’re capable of it. Every game’s different, and I’m ready for it.”

Bowe has admitted he’s not fond of teams with losing records making the playoffs, but that didn’t diminish how proud he was of his players, especially considering the Red Devils were only a few plays away from having four or five conference wins.

“Our seniors get another game, and our young kids get another week of practice,” Bowe said. “You always want to make it. … With everything we’ve been through this year and all the injuries and all the attrition we’ve had, and everything that’s gone on behind the scenes, it’s amazing that these kids have put themselves in that position.

“They’ve done a great job of just sticking with it, and the last two weeks hung in there, hung in there, and then finally tonight I think played like they’re capable.”

One player who did so Friday was Williams, who had four catches for 103 yards, all in the first half. Sophomore quarterback Nate Olson found Williams for a 33-yard score behind the defense with 3:59 left in the first quarter to give Bradford a 7-0 lead.

It was Williams’ first touchdown this season.

“I’ve been waiting for that all season, man,” he said. “It’s a blessing to finally get in there. I was excited.”

With 9:40 to go in the fourth, Terrell plucked a floating pass to the left side from Park senior quarterback Ricky Canady out of the air and raced 55 yards for a score and a 30-0 lead.

“I (saw) him scrambling,” Terrell said. “I knew he was kind of eyeing that out, because it was wide open. I just tried to bait him into throwing it, which he did, and (then) just take it to the crib.”

The Panthers gained 139 of their 225 yards in the fourth quarter, and Canady’s 8-yard scoring pass to Kelley with 4:55 left broke a Bradford shutout streak that lasted seven-plus quarters and overtime going back to last week’s 6-0 overtime victory at Tremper.

It was a bittersweet season for the Panthers, who had a much-improved campaign after going 3-46 in SEC play from 2012-18. Park coach Danny Hernandez — a former St. Joseph standout — was frustrated that his team lost several close games this season and ended on a three-game losing streak, which ultimately kept the Panthers out of the postseason.

“We did,” Hernandez, who praised his seniors, said when suggested his team put other SEC programs on notice. “But it’s a horseshoe-hand grenade sport. Close doesn’t count. You’ve got to find ways to finish. When you play enough of those close games and you lose, I think that does something to you, too.

“… To come up short in those close games obviously hurts. I truly believe good coaching wins close games, so we’ve got to get better in that regard.”

Bradford’s Damarion Williams catches a pass for a touchdown during the first quarter of a Southeast Conference game against Racine Park on Friday night at Bradford Stadium. Williams finished the first half with four catches for 103 yards in the Red Devils’ playoff-clinching victory.

Bradford quarterback Nate Olson runs for a touchdown during the second quarter of the Red Devils’ 37-14 Southeast Conference victory over Racine Park on Friday night at Bradford Stadium.

Bradford’s Damarion Williams gets behind the defense for a first-quarter touchdown.