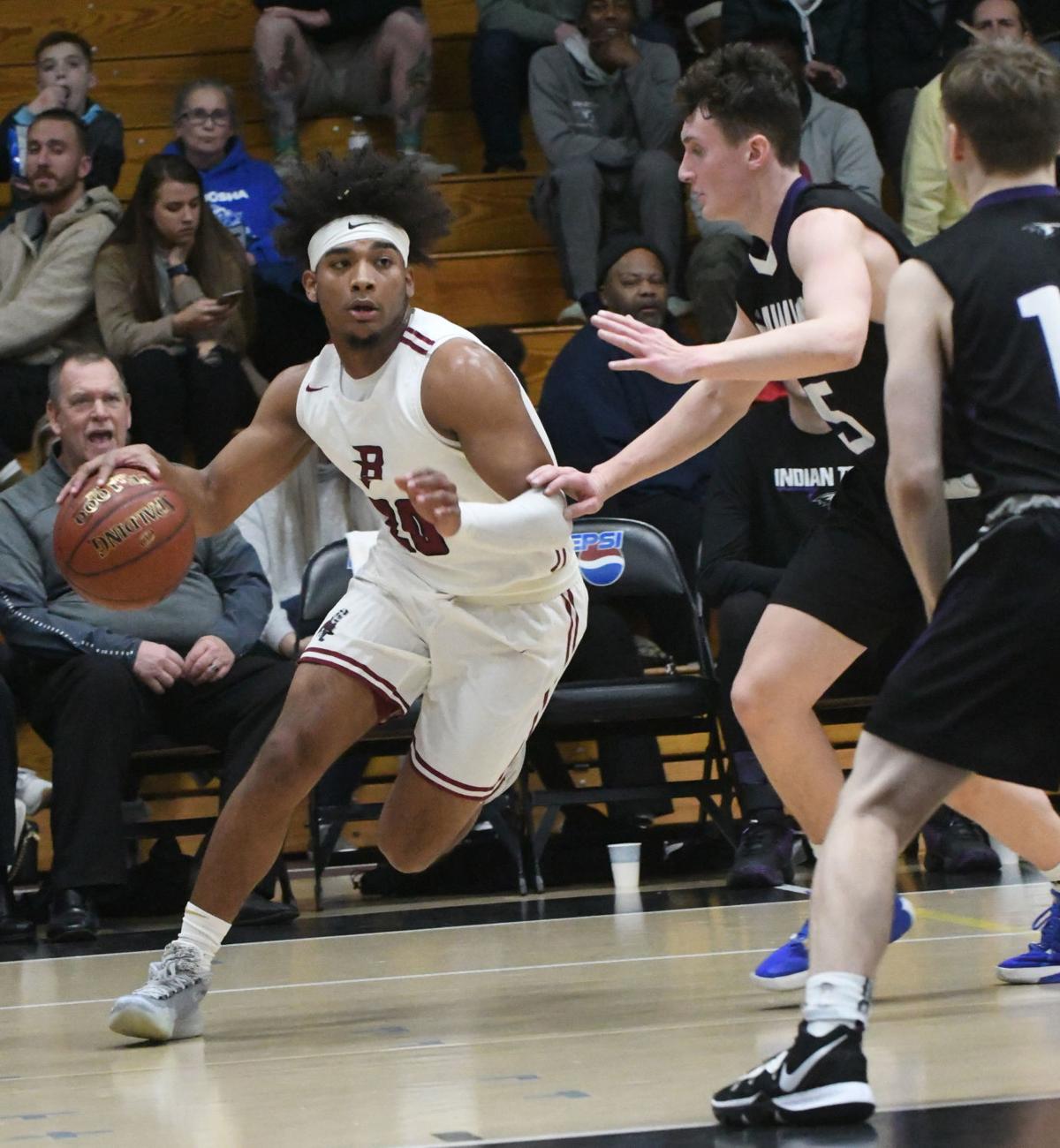 Bradford’s Will Darden, left, drives past Indian Trail’s Matt Felber and Kyle Andrews during a game earlier this season. 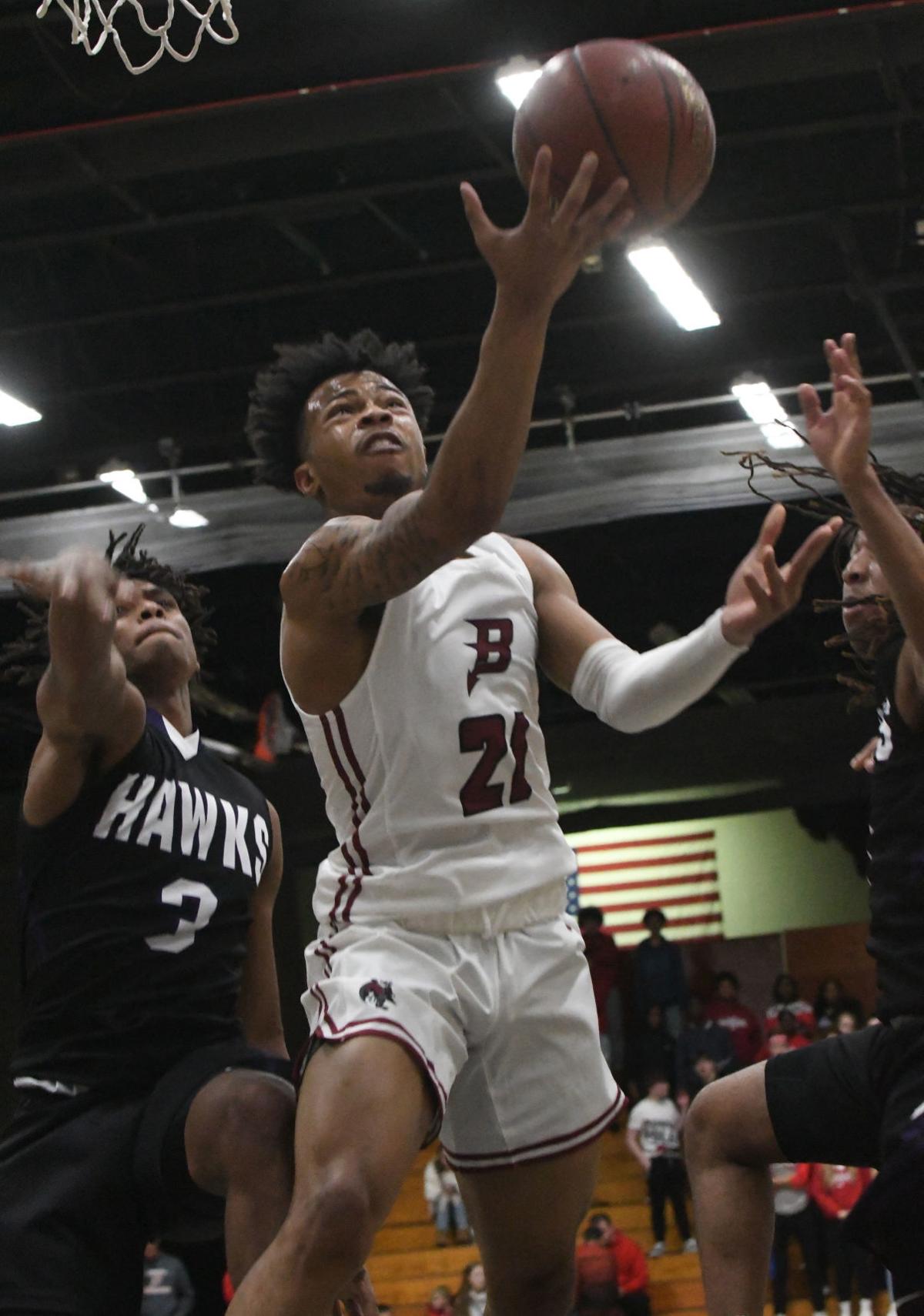 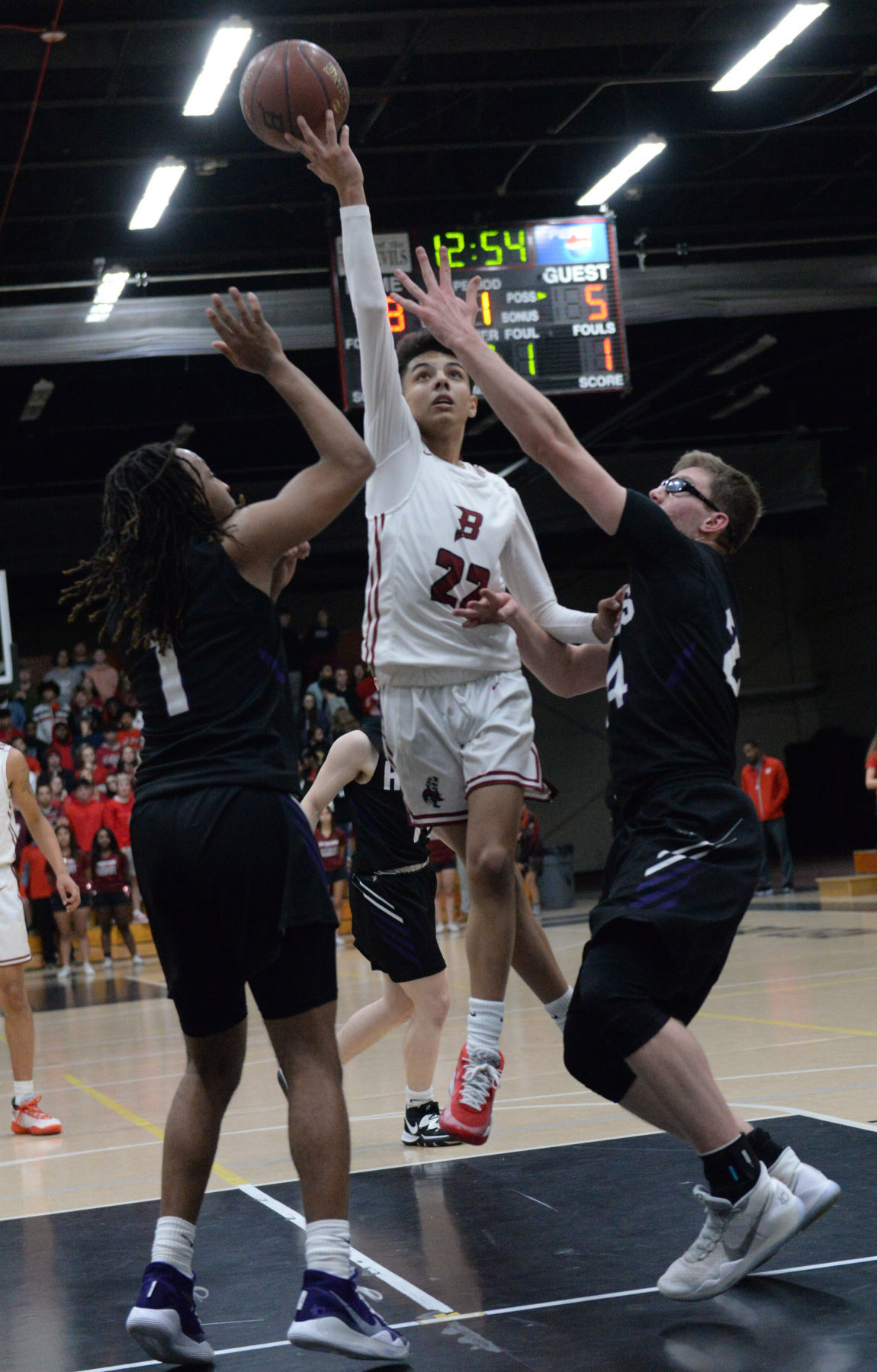 Bradford's Jalen Carlino, middle, splits the defense of the Indian Trail duo of Jeremiah Suber, left, and Anthony Bernero earlier this season. The Red Devils and Hawks will both be part of the eighth annual Doctors of Physical Therapy Holiday Classic at Carthage's Tarble Arena, which begins today. 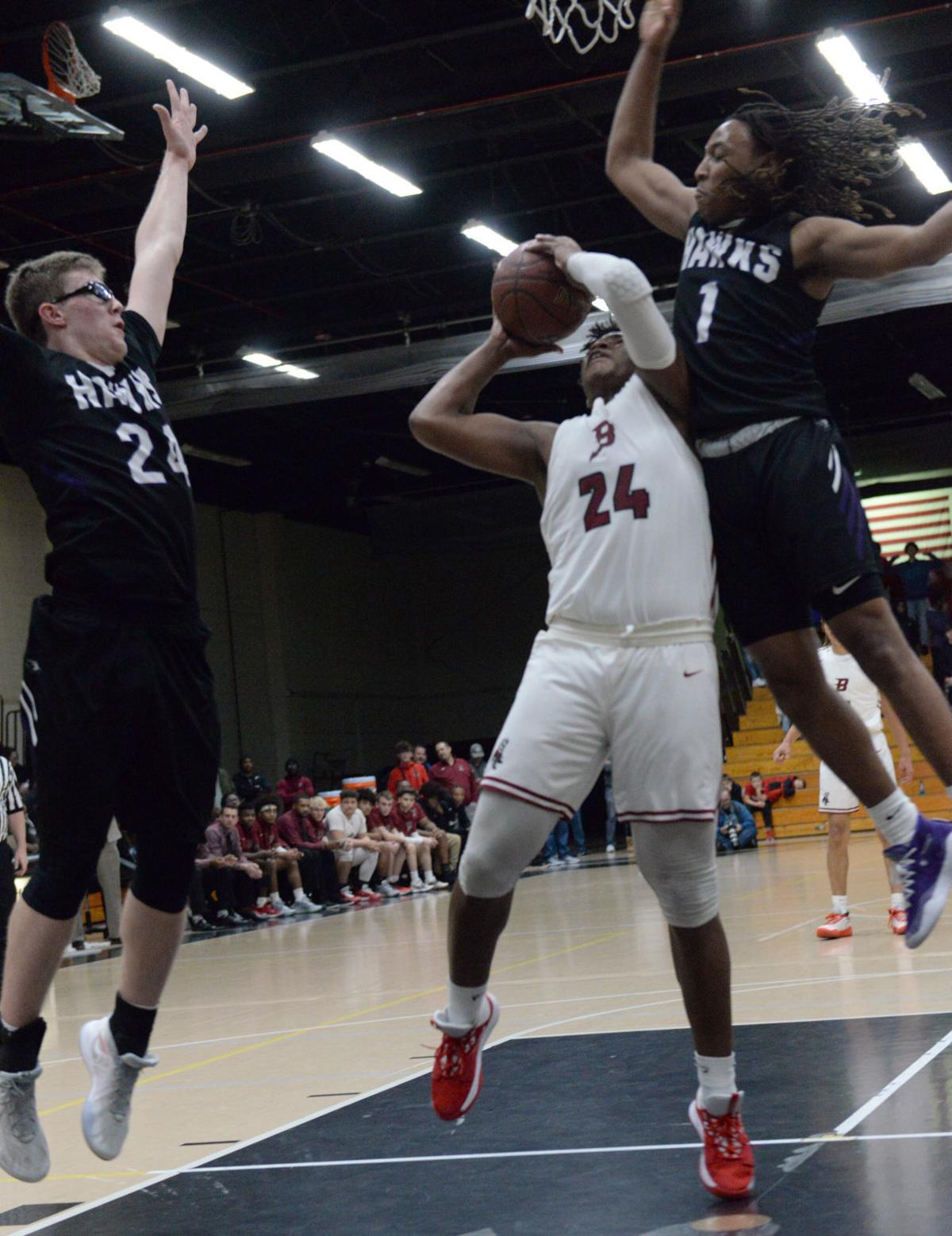 At the top of the list was the athleticism visiting Indian Trail would bring to the Bradford Fieldhouse.

Needless to say, Leech was more than pleasantly surprised by what transpired by the time the final buzzer had sounded.

The Red Devils withstood a 14-0 scoring run that covered the end of the first half and the start of the second and eventually pulled away for an 84-73 victory to improve to 3-0 overall and 1-0 in conference play.

“We saw energy tonight from our group that we hadn’t seen all year,” Leech said. “To be completely honest, coming into this game I was very nervous about our ability to defend against their quickness.

“The kids had tremendous effort, fundamentally they were strong on help side with penetration and closing out defensive possessions with rebounds. That was really big.”

Indian Trail, which trailed 38-32 at the intermission, came out firing to start the second half with four straight points on inside baskets by junior Ezra Stargell (six points, four steals, three assists) and Clayton Bishop (seven points) to pull within four points.

For Indian Trail coach Al Anderson, whose team is 2-1 overall and 0-1 in the SEC, there was plenty to be pleased with heading into the break.

“We got it to within six, which was outstanding,” he said. “We were down 16 at one point and got it to six. I just wanted to take that momentum into early in the second half, and they went on an early run. That kind of took a little bit of wind out of our sails, but there was still a ton of time left.”

But Bradford answered right back on a basket by senior Jashon Lee (15 points, seven rebounds, three steals) and a 3-pointer by sophomore Jalen Carlino (nine points).

For the next several minutes, the teams traded baskets to keep the issue still in doubt — but an 8-0 Bradford run answered that.

Glass missed most of the first half after he picked up two offensive fouls, but when he returned the Red Devils’ inside game certainly picked up.

“In the locker room (at halftime), we committed to going inside,” Leech said. “We thought we had an advantage there. We got some easy buckets. ... That high-low game was key, kind of settled us down, and we just kind of went on from there.”

A 3-pointer by Indian Trail senior Anthony Bernero (18 points, five rebounds) at the top of the key pulled the Hawks within 12 points with 2:04 left, but besides a flurry of Hawks’ points in the last minute, the Red Devils weren’t in danger the rest of the way.

Bernero continues to pose a threat for the opposition to be concerned with, Anderson said.

“I thought he did an excellent job,” he said. “He had an outstanding game. His footwork is incredible out there, his basketball IQ is pretty high, and he’s a very competitive kid. That’s a great combination.”

For most of the first half, the Red Devils’ lead hovered around double digits, as they threatened to put the game out of reach early.

A 10-0 scoring run that ended on a 3-pointer by junior Damarion Williams off an assist by junior Tre’Vion Gordon (21 points, five assists, three rebounds) pushed the lead to 22-9 with 8:05 left before the intermission.

And after a deep jumper by Gordon with 2:22 remaining, Bradford held what appeared to be a commanding 16-point lead at 38-22.

But the last two minutes belonged to the Hawks and brought them right back.

Senior Jeremiah Suber (24 points, four rebounds) started a 10-0 burst with a 3-pointer, followed by two straight baskets by junior Kameron Lee (six points), before Suber closed the half with another trey just before the horn sounded to pull Indian Trail within six points at 38-32.

“We had good ball movement, we were running our sets when we came back, and we were hitting some shots,” Anderson said. “The defense was a lot better, (but overall), defensively we have to get a lot better. We’re just giving up way too many points every game.

“You can’t do that when you’re playing an athletic team with a bunch of guys who can play on one team. You have to get better defensively.”

Leech certainly left the gym pleased with what he saw, but he knows the 2019-20 journey is only just beginning.

“I want to kind of temper the excitement a little bit, because coming into this game, from what I saw in practice the first two-and-a-half weeks and first two games, this was unexpected,” he said.

“But if we can capture this and have this type of energy the entire season, defensively, and play offensively in rhythm and not force things, I think we can do a lot of nice things.”

Bradford’s Will Darden, left, drives past Indian Trail’s Matt Felber and Kyle Andrews during a game earlier this season.

Bradford's Jalen Carlino, middle, splits the defense of the Indian Trail duo of Jeremiah Suber, left, and Anthony Bernero earlier this season. The Red Devils and Hawks will both be part of the eighth annual Doctors of Physical Therapy Holiday Classic at Carthage's Tarble Arena, which begins today.