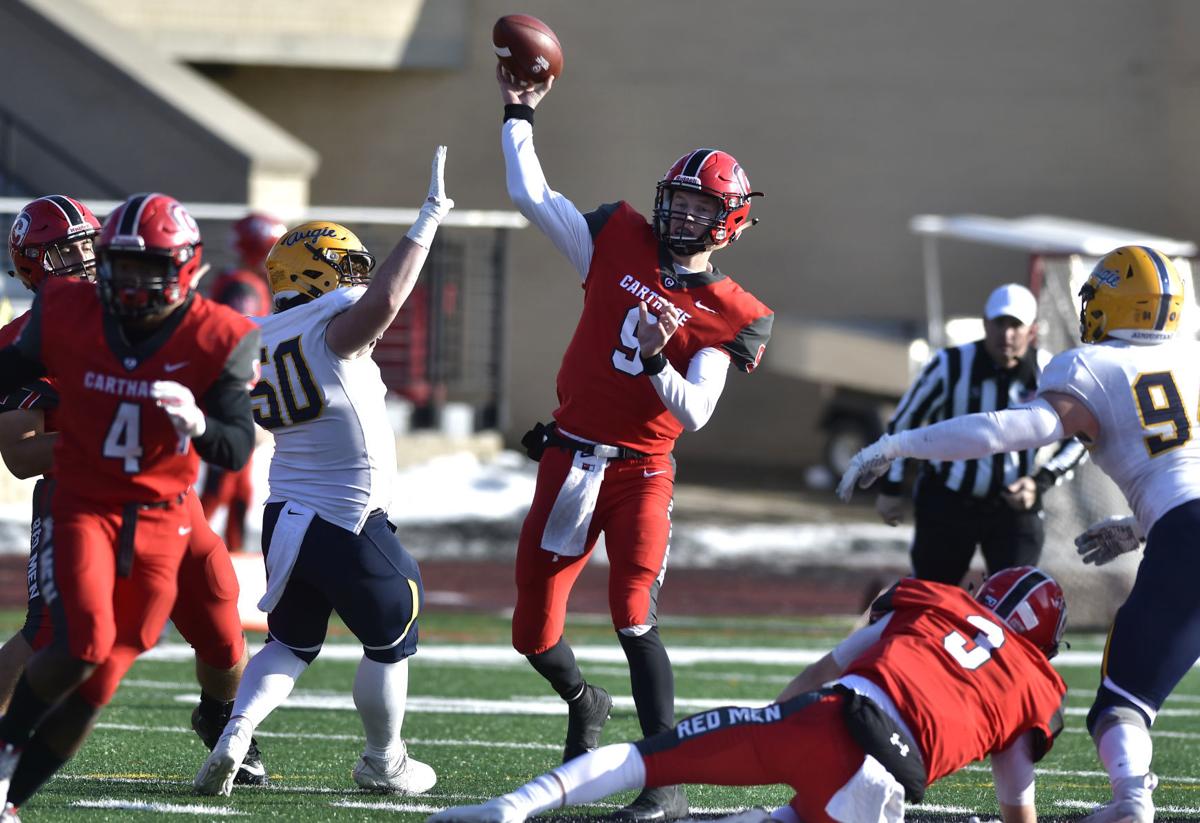 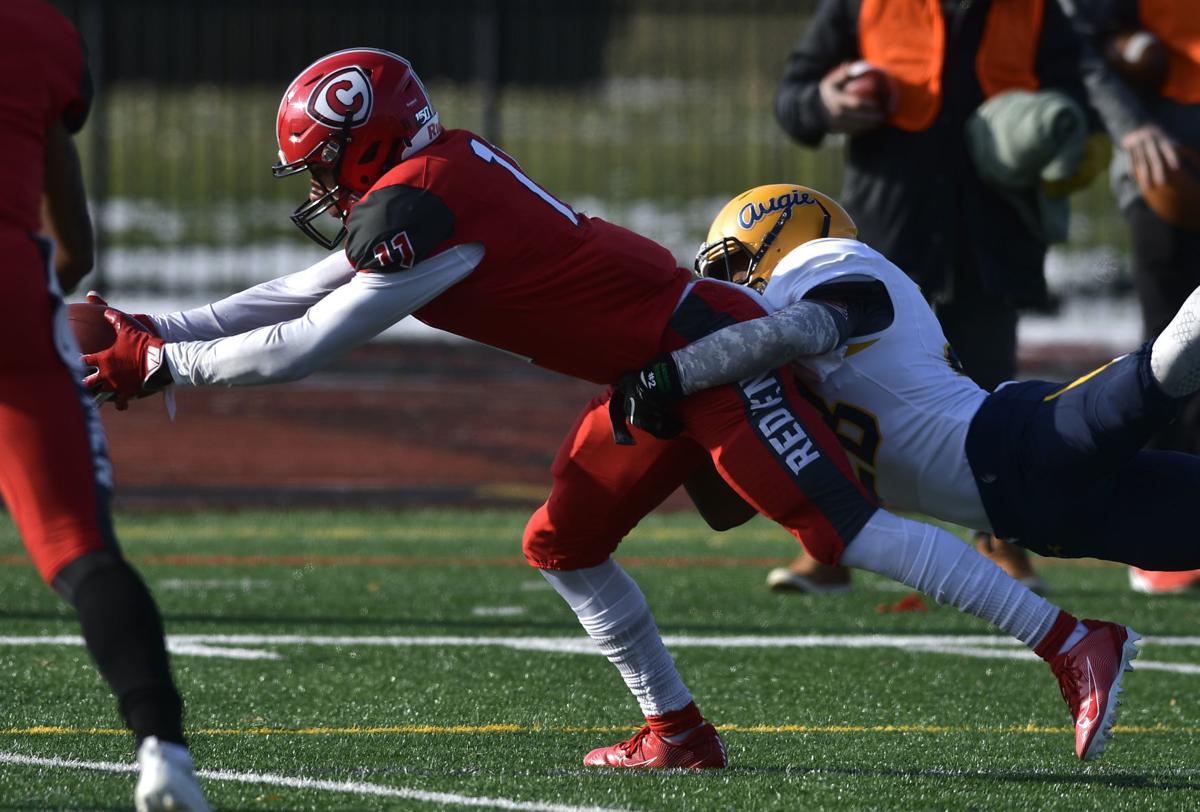 Senior receiver Jovone Stricker reaches for a touchdown for the Carthage football team after a reception Saturday against Augustana. Stricker led the Red Men with 70 catches for 856 yards and 10 touchdowns and on Wednesday was named first-team All-College Conference of Illinois and Wisconsin. 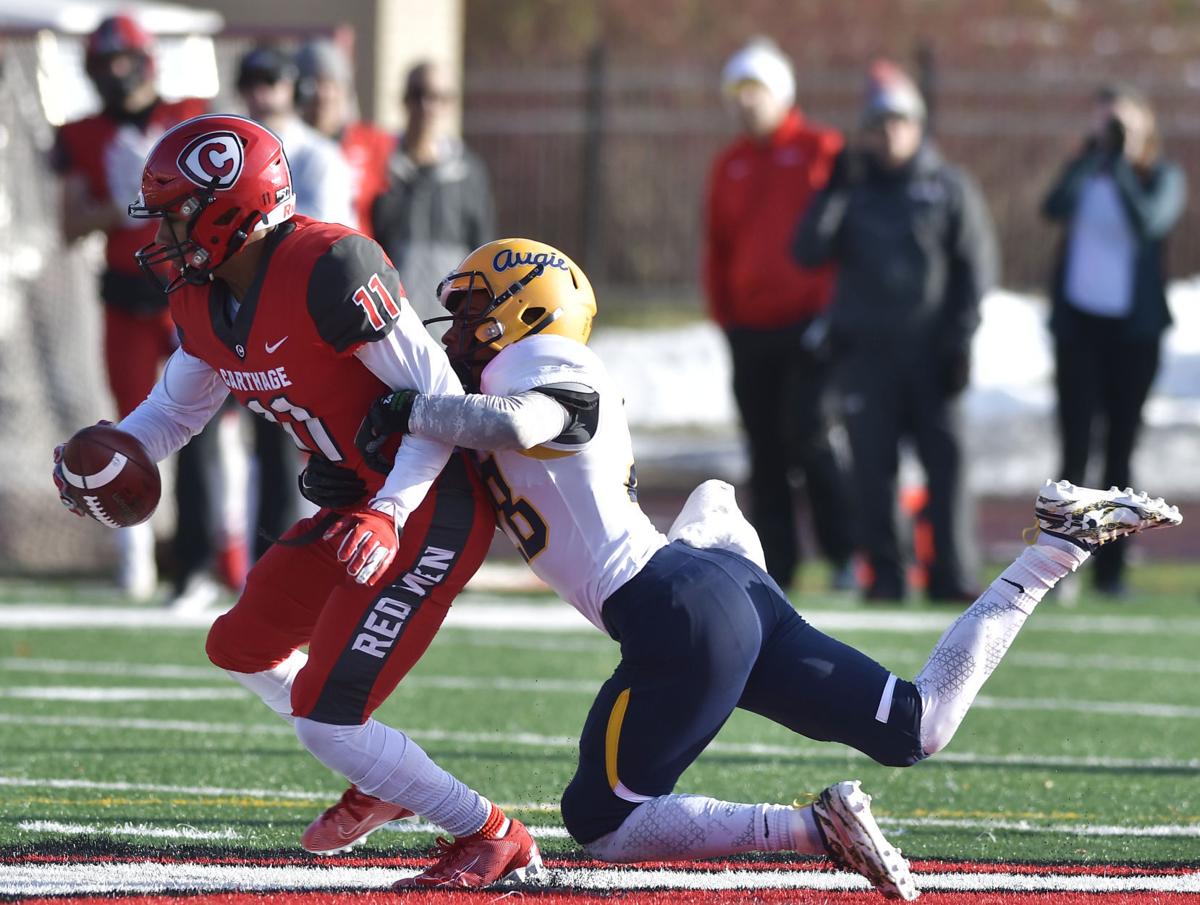 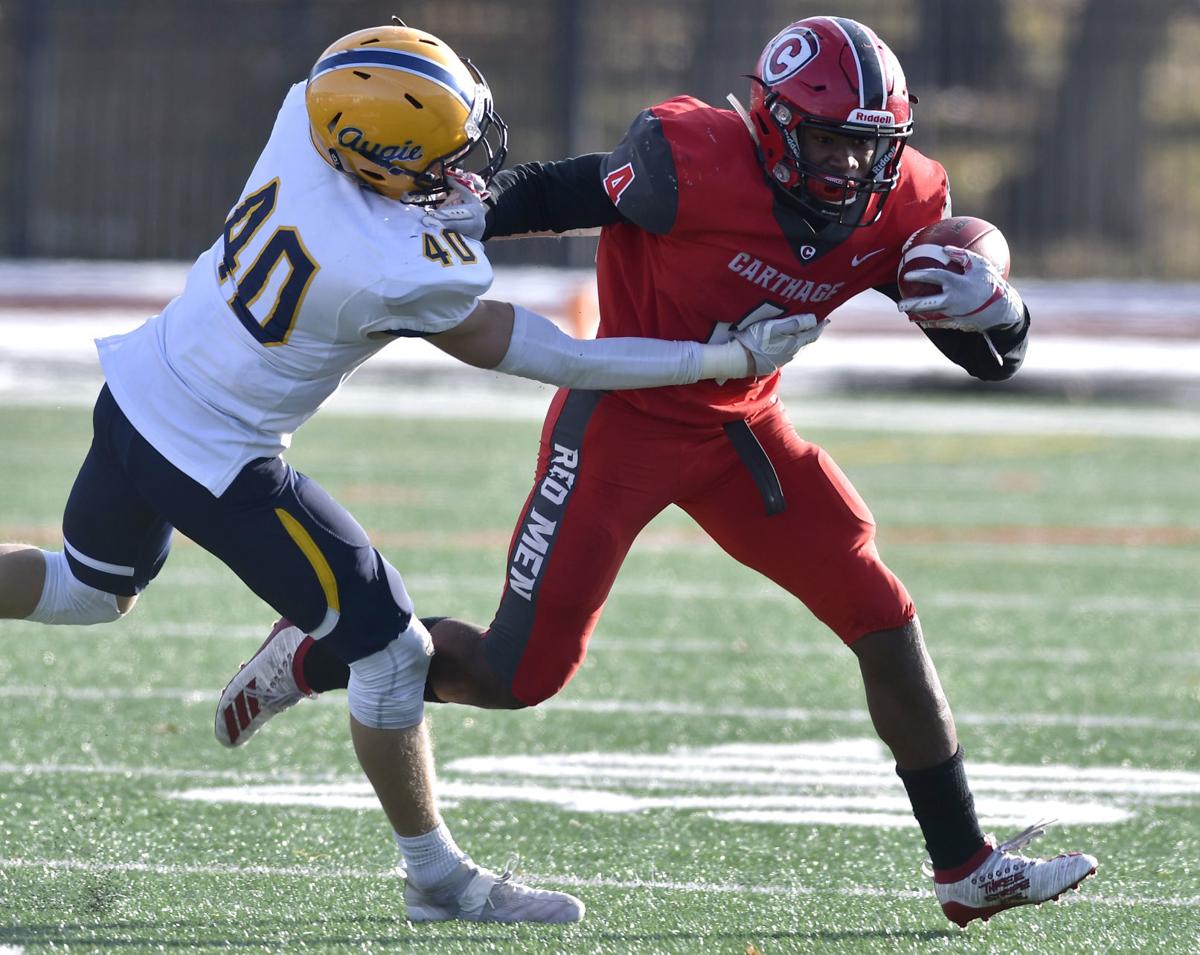 For a brief moment Saturday afternoon, it looked like the worst-case scenario for the Carthage football team would be a one-point deficit early in the fourth quarter.

Trailing by eight points to visiting Augustana, the Red Men were sitting on the Vikings’ front door with first and goal from the 4-yard line.

But in a blink, everything changed — and not in Carthage’s favor.

What appeared to be a touchdown pass from quarterback Colton Klein to Jovone Stricker turned into a game-changing, and controversial, interception by Augustana’s Zach Stewart that the Vikings turned into points of their own en route to a 51-36 College Conference of Illinois and Wisconsin victory.

Carthage coach Dustin Hass was at a loss to explain how the critical play unfolded.

“(The officials) couldn’t tell me what happened,” he said. “It was pretty obvious from my vantage point that Jovone caught the ball. He obviously got his feet down. The guy reached in, grabbed it and took it away. For some reason, they said it was an interception.

“Stricker gets about five feet down before that guy gets his hands on the ball, and they still count it as an interception. I don’t know you blow an obvious call like that. It’s tough. We tell our guys all the time that you have to control the controllables. It was just tough.”

And just like that, the momentum had permanently turned in the Vikings’ favor.

“It’s a 14-point swing,” Hass said. “We were going to go for two (if they had scored), but regardless if we get that or not, it’s tied or we’re down, but now they go down and score. It’s hard to come back from.”

After a 2-yard touchdown run by Augustana’s Antonio Cannon, Indian Trail graduate Alex Jarvis, a freshman, accounted for Carthage’s final points of the season with an electrifying 83-yard kickoff return to paydirt with a little more than five minutes left.

Leading up to the game’s key sequence, the teams traded points throughout the second half.

Klein hit Stricker on a 6-yard scoring play with 12 minutes, 4 seconds left in the third, and after a 40-yard field goal by Augustana’s Owen Ennis, connected on a 4-yard pass to Jalen Dennis that pulled the Red Men within eight points at 30-22.

The back and forth continued from there, as Augustana’s Alex Jacobs scored on a 20-yard touchdown run, followed by another Klein to Stricker in the right corner of the end zone that again made the game a one-score affair at 37-29.

The teams traded early field goals — Carthage’s David Collins struck first with a 36 yarder, followed by a 19-yard kick by Ennis — before Klein and Sticker connected on a 12-yard touchdown pass on the final play of the first quarter.

Klein, who made his return to the field from a torn foot ligament, was 19-of-33 for 313 yards and four touchdowns, including three to Stricker (nine catches, 120 yards).

“(Klein) is an unbelievably tough kid,” Hass said. “I don’t think you can discredit the amount of toughness he has to play with torn ligaments in his foot, and then play very, very well. He got hit a couple times, you could see him in pain, and he fought through it.

“He made a lot of football plays for us. He’s a tough kid. He’s a competitor. I can’t say enough about him.”

That was the final lead of the day for Carthage, however, as Augustana stormed back.

The Vikings moved ahead, 10-9, on a 34-yard scoring strike from Zachary Fuller (221 yards passing) to Tom Dollis, then pushed their advantage to eight points on a blocked punt by Jarosz, who recovered the football in the end zone.

Augustana added one more touchdown before the half on a 3-yard quarterback keeper by Alek Jacobs, before a little more bad luck cost the Red Men three points on final play before the intermission.

The Red Men blocked a 33-yard field goal attempt, but Augustana was flagged for a false start — after the kick — and on the retry from 38 yards, Ennis nailed it to extend the Vikings’ lead to 27-9 at halftime.

“A false start stops the play, and they didn’t stop the play,” Hass said. “They let it go, we blocked the kick, and then they blew it dead. I’ve never seen that before. Then he makes the field goal. Sometimes, the oblong ball doesn’t bounce in your favor.”

Despite the tough ending, Hass was proud of his group, which played without a number of starters against an experienced and senior-laden Augustana squad.

“Our kids care, they’re invested, they’re bought in,” Hass said. “They competed their butts off. You look at the amount of starters who were out this week and the guys below them who just stepped up.

“There was no drop off in fight or competitiveness. Those guys just threw it all in there. I don’t think you can say enough about our kids.”

Here are some photos from the events that took place locally during the weekend of Nov. 8 through Nov. 10, 2019.

Senior receiver Jovone Stricker reaches for a touchdown for the Carthage football team after a reception Saturday against Augustana. Stricker led the Red Men with 70 catches for 856 yards and 10 touchdowns and on Wednesday was named first-team All-College Conference of Illinois and Wisconsin.