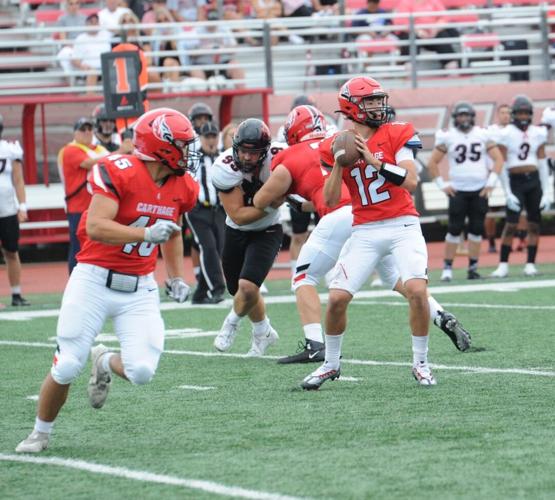 Carthage quarterback Christian Beltran (12) looks downfield for receivers as Nathan Lee (45) flairs out to the right during Carthage's 59-7 loss to North Central earlier this season. 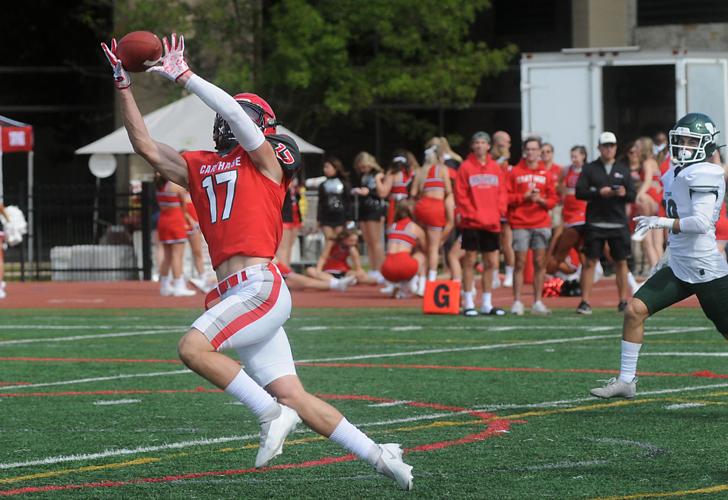 A pick-six is extremely rare in football.

He threw a pick-6 Sunday in the Packers' win over the New England Patriots, and it was only the fourth, yes, fourth, in his 17-year career.

On Saturday, the Carthage football team picked off three passes and returned them for touchdowns in one game.

That usually leads to good results.

The ball-hawking defense flew all over the field, and quarterback Christian Beltran had a career day as the Firebirds cruised to this season's first win, 57-21, at Elmhurst, Ill. in a College Conference of Illinois and Wisconsin matchup.

The Firebirds were coming off two straight blowout losses at home, including a 45-16 loss to Washington University of St. Louis for Homecoming Sept. 24.

Garrett Warner returned his interception for a touchdown 60 yards to give the Firebirds a 14-7 lead, and Evan Mutterer's 92-yard pick-six and Tre Mitchell's 44-yarder helped Carthage run away from Elmhurst late in the game.

Elmhurst turned the ball over six times, compared to three for Carthage.

Beltran dazzled through the air, throwing for a career-high 254 yards on 17-for-30 passing and four touchdowns.

"This is the first time since I've been here that we have had three pick-sixes on defense," Hass added. "Our defense did a great job today, which is what we stressed in practice this past week. Christian Beltran showed what he can do today when he has time to throw the football. Beltran did a good job distributing the ball today, going through his reads and progressions. He had time, which led to good throws. Though we still have some work to do, this win was a good step in the right direction."

"College football wins are hard. Any win is a good win."

After Elmhurst scored first, Carthage marched down the field and scored on a one-yard run from Rey Guajardo to tie it at 7-7. Warner's pick-six made it 14-7 to end the first, then Beltran took over.

He threw three touchdowns in a row late in the second quarter to give the Firebirds a comfortable 41-14 cushion at the half.

With Elmhurst in catch-up mode in the second half, Carthage added the two interception returns for touchdowns, plus a 22-yard field goal from Sebastian Haske to end the scoring.

On the ground, Ian McGee rushed for 84 yards, and Guajardo provided his first rushing touchdown of the season.

"I think we can carry the momentum over," Hass said. "We just need to focus on improving every day."

Fans attending Wisconsin's game against Wake Forest were asked to shelter in place following the conclusion of the game out of precaution.

The UW Board of Regents gave short notice for a Sunday afternoon meeting to consider contracts for the new Badgers coach.

Wisconsin’s three games were settled by five points. The Badgers return home at 5-1. Here’s what we learned from their trip to the Bahamas.

The Badgers could still make the Big Ten Championship Game and extend their 20-year bowl streak in the process. Here's their path to Indianapolis.

Chucky Hepburn struggled shooting and taking care of the ball to start the Badgers' season. He broke out with a career high on Friday.

What to know about Wisconsin men’s basketball game vs. Wake Forest

TV information, potential starting lineups and things to know about the Demon Deacons to prepare you for the men’s basketball team's game against Wake Forest.

Wisconsin has its next leader, and Luke Fickell needs to upgrade the roster, among several things he needs to prioritize.

Luke Fickell and Chris McIntosh revealed the first time they met and why the Fickell family decided to become Badgers.

Badgers coach Luke Fickell expected to bring coaches on both sides of the ball and key members of the support staff to Madison.

Wisconsin men's hockey has to go on the attack against Michigan

Rookie of Month Christian Watson on Touchdown vs. Eagles

Rookie of Month Christian Watson on Touchdown vs. Eagles

What Should The Packers Do At QB?

What Should The Packers Do At QB?

Carthage quarterback Christian Beltran (12) looks downfield for receivers as Nathan Lee (45) flairs out to the right during Carthage's 59-7 loss to North Central earlier this season.