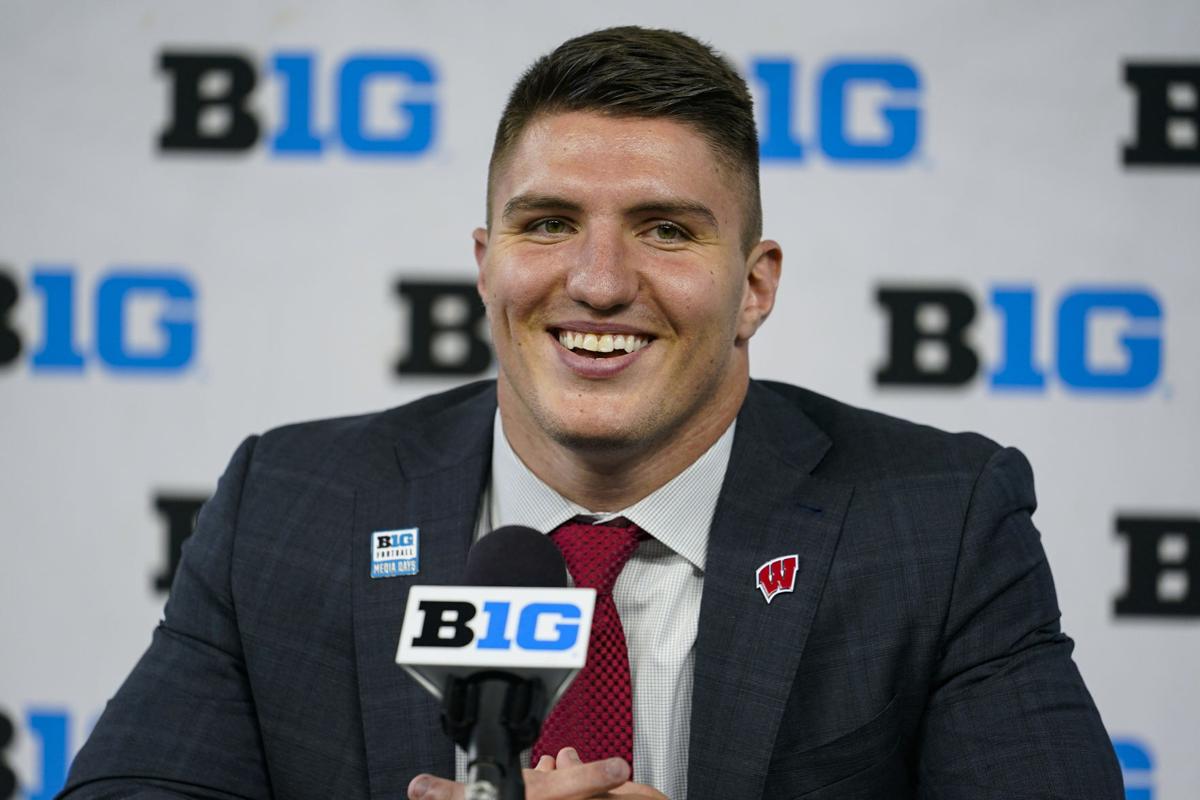 Wisconsin linebacker Jack Sanborn talks to reporters Friday during Big Ten media days. Sanborn and the Badgers' other representatives hope it won't be their last trip to Lucas Oil Stadium this season. 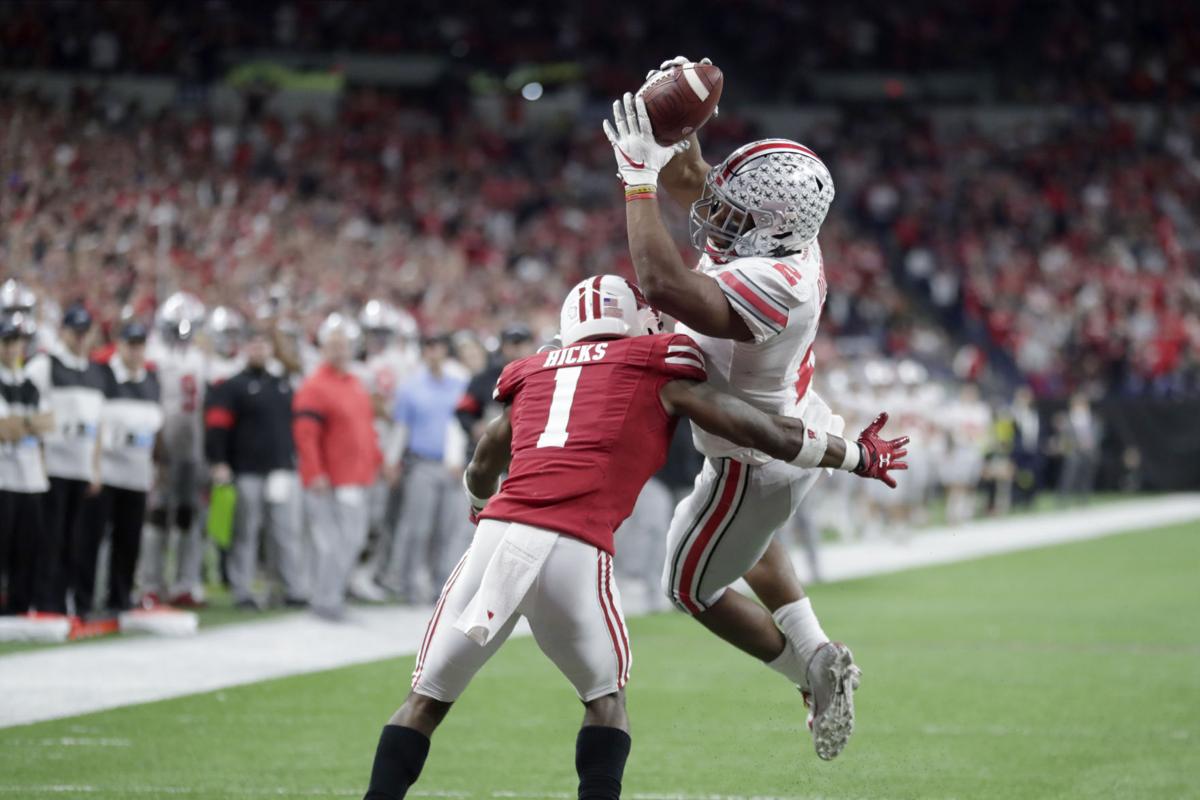 Ohio State running back J.K. Dobbins scores a touchdown against UW cornerback Faion Hicks during the first half of the Big Ten Championship Game in 2019.

INDIANAPOLIS — The turf they stood on holds some painful memories for the trio of University of Wisconsin football players representing the program Friday at Big Ten Conference Football Media Days.

Lucas Oil Stadium was the site of two of the most difficult losses for the Badgers under coach Paul Chryst, a pair of Big Ten title game defeats against Ohio State in both 2017 and 2019.

All three Badgers seniors at media days — tight end Jake Ferguson, cornerback Faion Hicks and linebacker Jack Sanborn — played in the 2019 game, and they were invested in the 2017 game in their own ways.

But if UW reaches the heights it wants to this season, namely a Big Ten championship and the College Football Playoff title, they’ll have to exorcize their demons in Indianapolis. Lucas Oil Stadium hosts both events this winter.

Ferguson and Hicks were redshirt freshmen watching in dorm rooms as the undefeated, fourth-ranked Badgers fell behind the eighth-ranked Buckeyes 21-7 in the first half of the 2017 contest. UW fought back into the game after halftime and, after Chris James’ 1-yard touchdown run and a two-point conversion pass to Troy Fumagalli, the Badgers were behind 24-21 early in the fourth quarter.

The Buckeyes’ defense held firm from that point, allowing 37 yards on 14 plays and picking off an Alex Hornibrook pass on UW’s last possession.

As he watched, Hicks said he could barely contain himself.

“It was tough,” he said. “It was just kind of like being anxious, ‘Like, man, I can’t wait to be on that stage with those guys.’ Really just thinking when I get my opportunity, I want to make the most of it.”

Sanborn, already orally committed to UW as a four-star recruit, was at home watching his future team lose a heartbreaker.

When they got their chance to play Ohio State for a conference championship in 2019, they helped 10th-ranked UW engineer a 21-7 halftime lead and put a scare into the No. 2 Buckeyes. But a 17-point third quarter gave Ohio State a lead it didn’t relinquish and UW fell 34-21.

That game left a lasting impression.

“I always think about how it was kind of a tale of two halves,” Sanborn said. “I mean, the first half, I thought we played really good football and second half, not so much.

“I thought that we were a different team in the fourth quarter, and they were the same team that they were in the first quarter — fourth quarter, first quarter, they’re the same team. That was the difference. So we know that, we understand that. And that’s where we’re getting to. That doesn’t just happen in that game, that happens now, in the summer and spring ball. So I think everyone understands that. So it’s about what we do now so then when we get back here, we can finish the job.”

Ferguson let out a long sigh when asked of his memories of that night.

“We had a great mentality that year, we had a great message that we were putting out to guys, people were bought in. But it just kind of shows that we’ve got to do that much more to be able to complete something that we want to do,” Ferguson said.

This season will likely be the last chance for this trio to win a Big Ten title, something the Badgers haven’t done since 2012. All three decided to stay at UW instead of trying their hands at a pro career, and it’s unlikely they’ll do so again.

Hicks believes this opportunity was a reason this group, along with other seniors like receivers Danny Davis and Kendric Pryor, chose to play for the Badgers for another year.

“We had it in our hands and it was just gone, just like that,” Hicks said. “The window of opportunity is very small. It ain’t easy making it here, so when you do man, you’ve got to go all out and give it your all.

“Seeing the older guys being so disappointed not being able to take this ‘W’ home and how much this means to our program … it adds fuel to the fire, it kind of motivates me. All of our leaders right now are motivated by that. Right now it’s about coming back and proving everybody wrong.”

Get to know the Wisconsin Badgers' 2022 football recruiting class

Myles Burkett became the Badgers’ first Class of 2022 recruit when he announced his decision in January.

The 6-foot-1, 200-pounder from Franklin is a three-star recruit per 247Sports and Rivals, and showed great mobility and arm strength in his junior season. He battled back from a knee injury as a sophomore to throw for 1,236 and 11 touchdowns and rush for 180 yards and a score in a pandemic-shortened season.

He’s the first in-state quarterback to earn a scholarship out of high school since 2011.

As his recruiting stock started to rise, the Badgers were able to secure a commitment from Fall Rivers’ Barrett Nelson in late June.

The offensive tackle was 6-foot-6 and 255 pounds after his junior season, and his quickness off the ball has made him a load on both the offensive and defensive lines. Nelson is a three-star recruit per 247Sports and a two-star on Rivals.

He had offers from Iowa State, Northwestern, Nebraska, Purdue and others before choosing UW.

Seagreaves is an intriguing prospect for the Badgers — at 6-foot-6 and 220 pounds, he has the physical frame to grow into an imposing tight end, and he possesses sprinter speeds. He’s averaged more than 21 yards per catch each of the past two seasons and was starting to gain more Power Five conference interested when he committed to UW.

Seagreaves is a three-star recruit per 247Sports and a two-star according to Rivals.

Excited to announce I am officially a Wisconsin Badger!🔴⚪️ @BadgerFootball #Committed pic.twitter.com/AotFjncvN3

In multiple trips to UW’s campus in June, Cade Yacamelli was called “a football player” by UW coaches rather than locking him into a position. He earned a scholarship offer after an impressive camp workout and accepted it in late June.

The consensus three-star athlete was starting to earn more recruiting attention from Power Five schools when he accepted the Badgers’ offer. UW was the first Power Five offer for the 6-foot, 200-pounder. He’s played receiver, running back and defensive back in high school, but likely projects as a receiver or defensive back in college.

The Penn Trafford High School product has good quickness and change-of-direction that make him dangerous with the ball in his hands.

When A’Khoury Lyde accepted a UW scholarship offer in late June, he became the first player on the defensive side of the ball to commit in the 2022 class.

Lyde (5-foot-11, 170 pounds), a consensus three-star recruit, has strong ball skills and a willingness to hit that separates him from other cornerbacks.

The Wayne, New Jersey, native is the eighth-ranked player in his state, per Rivals.

The DeWitt, Michigan, native stands 6-foot-5 and weighs 200 pounds. He uses his body to shield off defenders at the point of the catch and does well catching the ball away from his body. His Hudl page lists a 4.47-second 40-yard dash time, and he has breakaway speed when he gets in the open field and can use his long strides.

Neal — a 6-foot-2, 310-pounder — had more than 25 scholarship offers, and reportedly was deciding between UW and Ohio State at the end of his recruiting process. Neal is a product of William Amos Hough High School in Cornelius, North Carolina, where the Badgers found receiver Devin Chandler in last year’s cycle.

Neal, with his size and strength, likely fits best as a nose tackle in the Badgers’ 3-4 scheme.

Thank you mamma. Now dry your eyes, you made a man of I❤️ pic.twitter.com/vNj7Smipek

Jim Leonhard may have found another rangy, smart cornerback to add to his secondary in Avyonne Jones, who committed in to UW in late June.

Jones — who hails from Southlake, Texas — was on campus the weekend of June 18 for an official visit and had narrowed an extensive offer list to UW and California. The 5-foot-11, 180-pound defensive back was previously committed to Oklahoma State, but retracted that commitment in late May.

With good recovery speed and a good feel for getting his hands between a receiver’s at the point of the catch, the consensus three-star prospect is a good fit for what UW cornerbacks coach Hank Poteat said he wants from his position group.

The Badgers landed the top-ranked player in Wisconsin for the sixth consecutive recruiting class when Joe Brunner committed the last week of June.

Brunner — a 6-foot-6, 300-pound prospect from Milwaukee who attends Whitefish Bay High School — is a consensus four-star recruit and a top-10 offensive tackle in the nation.

He held at least 16 Power Five scholarship offers, including ones from a majority of the Big Ten Conference, LSU, Notre Dame, Oregon and Tennessee.

Possessing a good burst of speed and long arms that extend his catch radius, the 6-foot-1, 170-pound Anthony has a chance to play across the formation as a receiver.

Austin Brown — who hails from Johnston City, Illinois, a small town outside of Carbondale — was considering offers from Boston College, Illinois, Michigan and Northwestern before choosing UW. The consensus three-star prospect had 21 known scholarship offers.

Brown committed to UW on the Fourth of July.

At 6-foot-1 and 195 pounds, he has a good frame already and his high school film shows a willingness to lay big hits and attack blockers. He also plays quarterback for Johnston City.

Breaking down the Wisconsin Badgers 2021 recruiting class by position

National Signing Day saw the University of Wisconsin football team bring in its highest-rated class in the internet rankings era.

Stories, videos and podcasts covered all the action and news from UW football spring practices.

A collection of the most interesting quotes and thoughts from Badgers players and coaches during spring practices.

Wisconsin linebacker Jack Sanborn talks to reporters Friday during Big Ten media days. Sanborn and the Badgers' other representatives hope it won't be their last trip to Lucas Oil Stadium this season.

Ohio State running back J.K. Dobbins scores a touchdown against UW cornerback Faion Hicks during the first half of the Big Ten Championship Game in 2019.