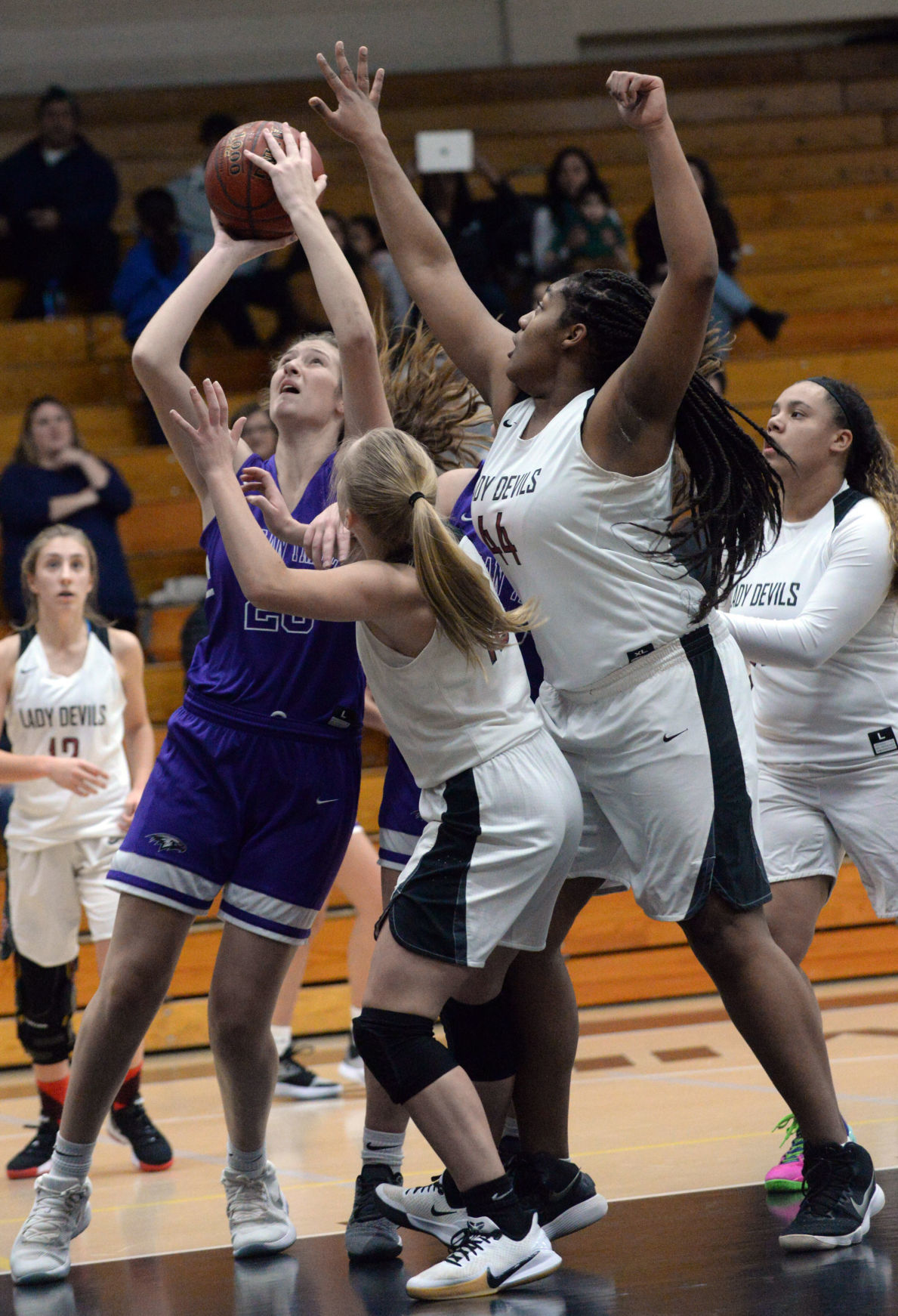 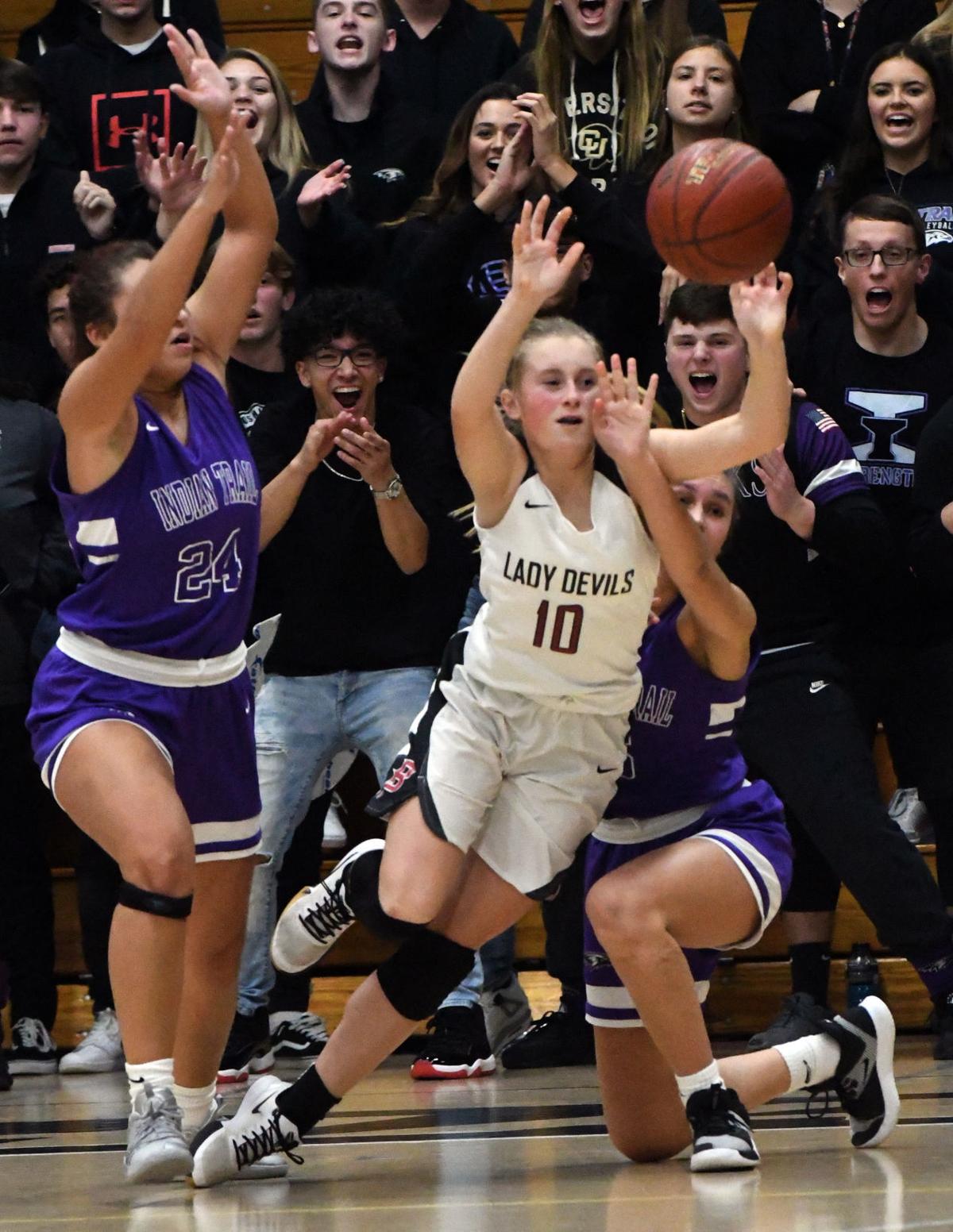 Bradford’s Haley Christianson, middle, fights through the double team of Indian Trail’s Jasani Williams, left, and Kalina Winslow, right, earlier this season at the Bradford Fieldhouse. In the rematch Tuesday night at Indian Trail, Winslow scored a team-high 18 points to lead the Hawks to a 44-40 Southeast Conference win. 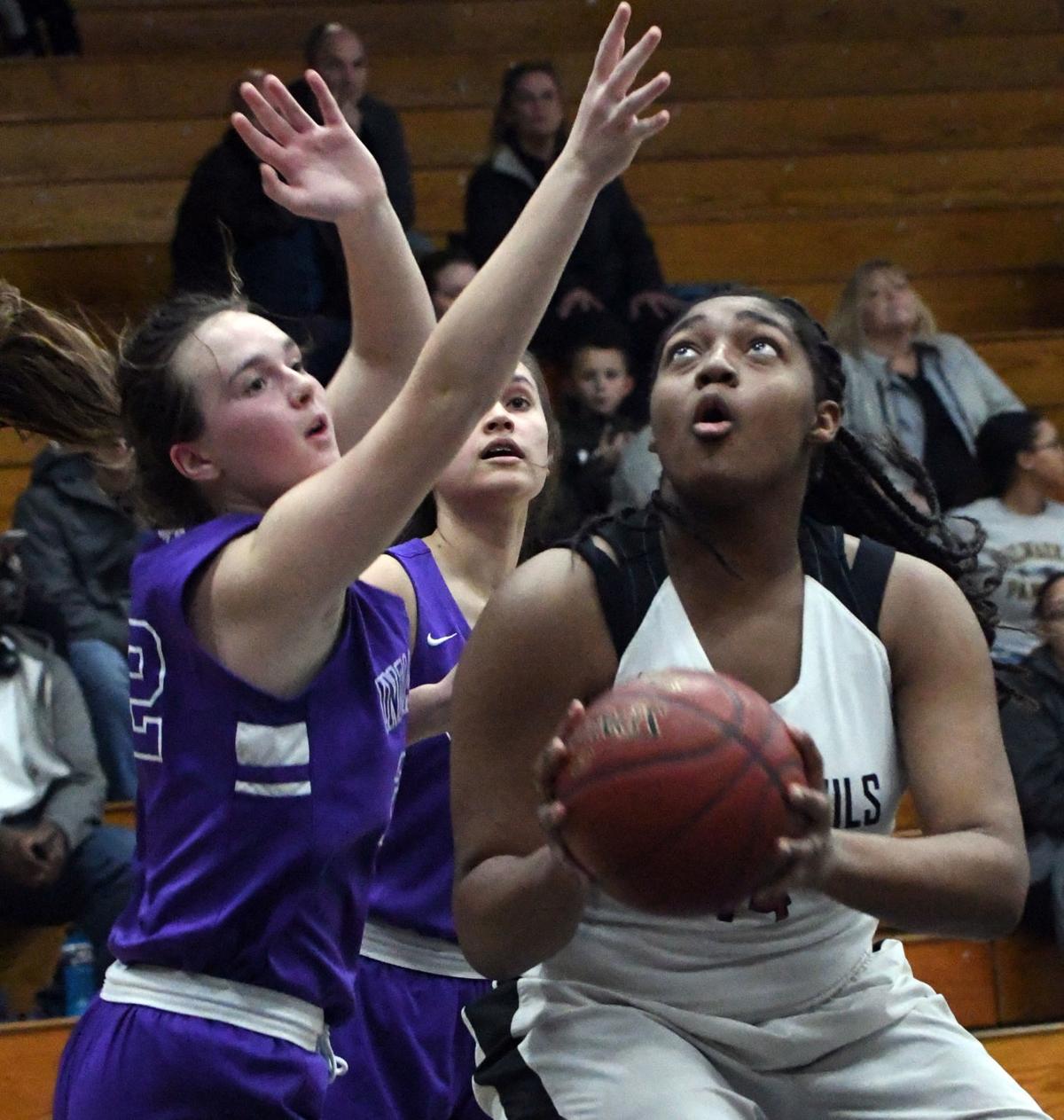 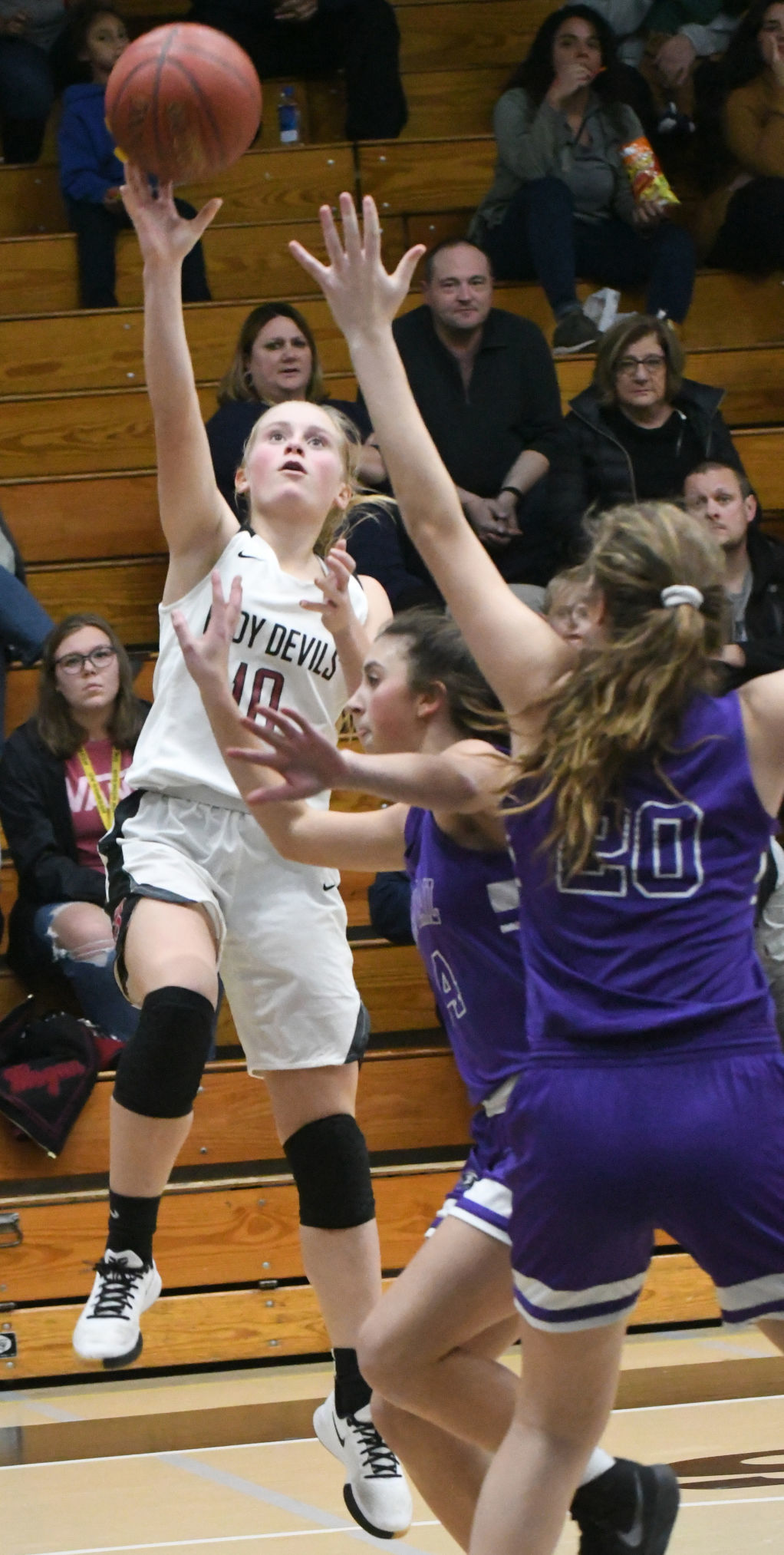 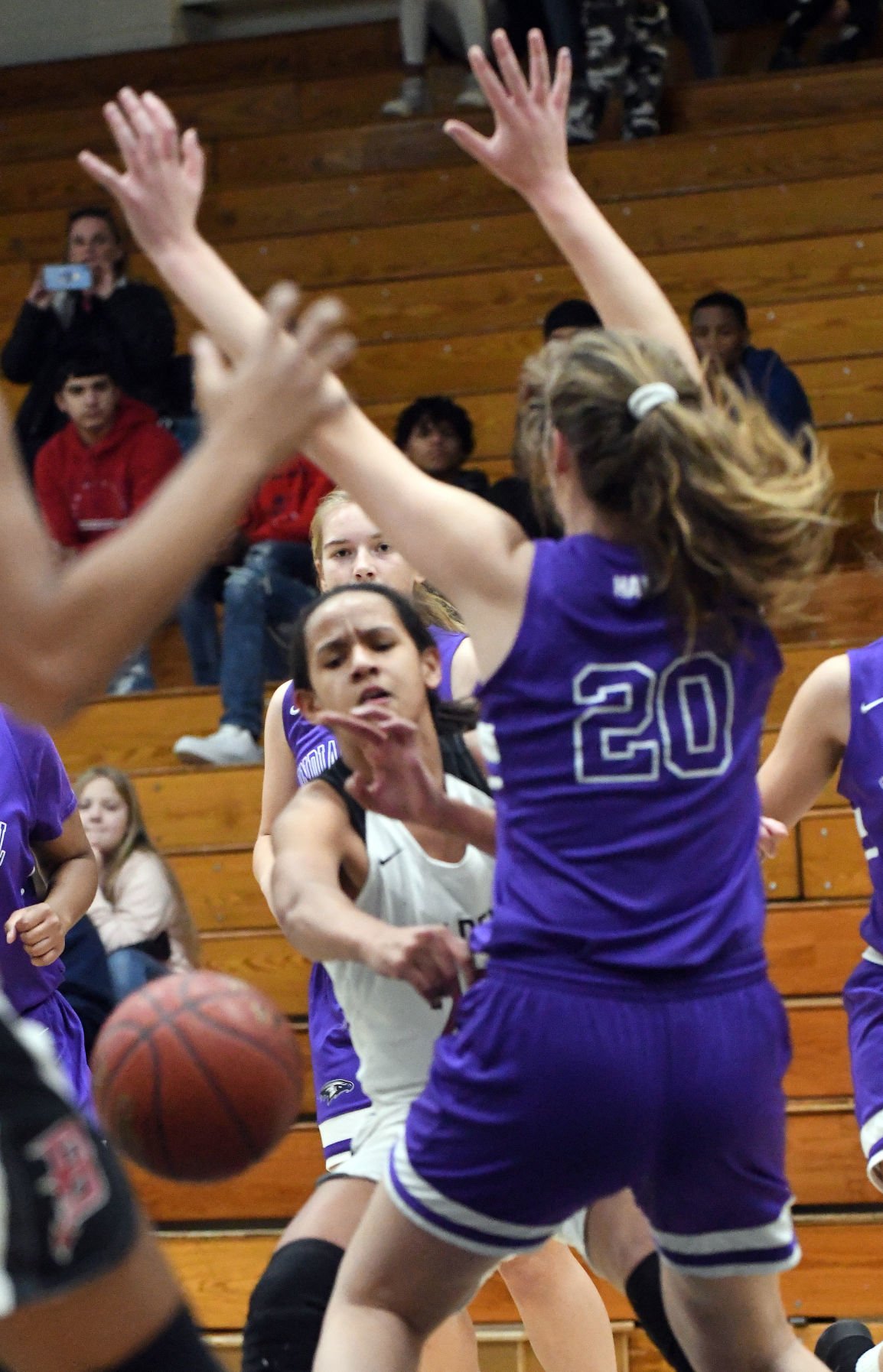 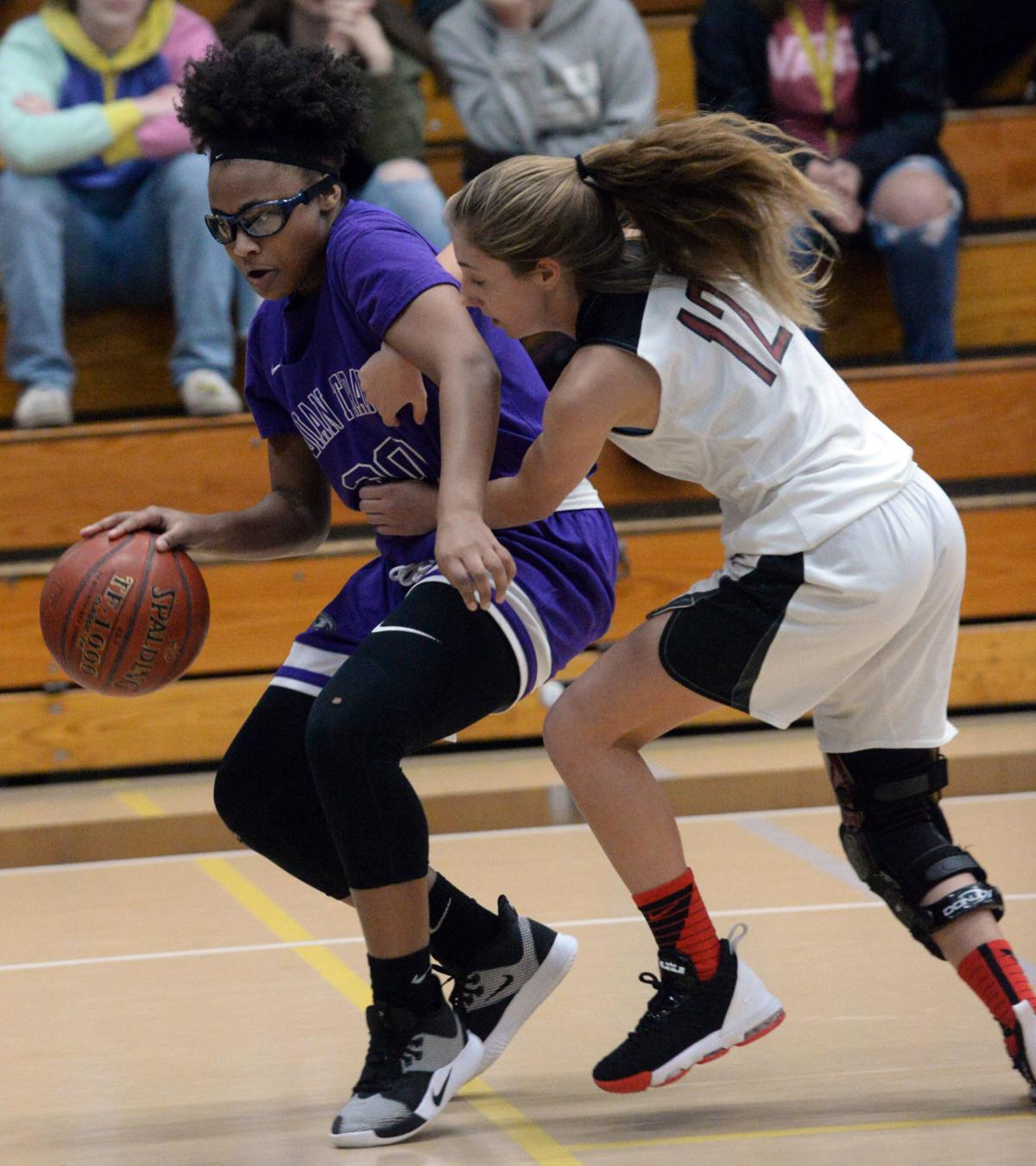 With the youth on its roster, there’s little doubt the Bradford girls basketball team is going to have some growing pains this season.

And at times Friday night, especially in the second half, the Red Devils looked the part with Southeast Conference rival Indian Trail breathing down their necks.

But Bradford withstood that late charge and emerged still perfect in the young conference season.

The Red Devils held a 19-point halftime lead but saw that dwindle to just a five-point edge in the final two minute before they held off the Hawks for a 54-47 win in the first game of a girls-boys doubleheader between the two schools at Bradford.

“It’s a huge win for our program, for our girls,” she said. “They came out with intensity and did everything we asked them to do. We were picked to come in last in the conference, and we’re 2-0 (3-2 overall) right now.

“We hope we can continue with this and continue working hard and winning basketball games.”

The positive for Indian Trail coach Rob VanDyke, whose team dropped to 2-3 overall and 1-1 in the SEC, was that the Hawks refused to quit even in the face of what seemed to be an insurmountable deficit at halftime.

“Our girls have a lot of fight,” he said. “We just have to have that fight from the first possession. I thought Bradford did a good job getting out on us early and stretching the lead. They got some easy buckets because we didn’t get back in transition.

“We just talked about at halftime that we had to just go play, get after it and do what we do. We’ve been making strides. We have to continue to get better.”

The game hung in the balance with just 1 minute, 1 second left when the Red Devils put together perhaps the most critical sequence of the night.

By the time the dust had cleared, the Red Devils had an eight-point lead they wouldn’t give back.

Ervin was a rebounding machine with 20 to go with her 13 points.

“We’ve been focusing on rebounding and really stressing rebounding,” Ferrille said. “Unfortunately, we weren’t knocking down our free throws tonight, but they made up for it in other ways.”

Indian Trail, which trailed 28-9 at halftime, used a stifling pressure defense to get back within range.

A reverse layup by Indian Trail junior Kalina Winslow (eight points) and a 3-pointer by senior Kelsey Cornell (nine points) cut the lead to 48-42 with 2:40 left. A baseline drive and a basket by Winslow and a rebound basket by senior Jasani Williams (11 points, five rebounds) pulled the Hawks within five points twice to set up the final minute.

“We were able to do some things extending the floor, pressuring them a little bit and getting some easy buckets ourselves in the second half,” VanDyke said. “That was obviously a positive.”

The pressure defense applied by Indian Trail certainly made an impact, Ferrille said.

“We’re young,” she said. “I’m playing a lot of freshmen. It’s easy for them to just get flustered and throw the ball. I think their composure against that press was fantastic. I couldn’t ask for anything more.”

For most of the first half, it looked like it would be a Bradford runaway.

A three-point play by Williams with 6:03 left before intermission cut the Red Devils’ lead to 14-9 — but that was the end of the offense in the first half for the Hawks, as Bradford ripped off the next 14 points.

Christiansen led the way during the run with a pair of 3-pointers to spark the late scoring burst.

“Credit their defense,” VanDyke said. “They’re long and lanky. I thought we were a little hesitant in the beginning. We got some good shots. We just couldn’t find the rim and the basket. We had a couple offensive opportunities at putbacks that we just didn’t get.”

From St. Joseph to NCAA Division I Illinois State, Kate Del Fava has traveled quite the path in her soccer career.

The long-speculated name American Family Field was confirmed as the new name for Miller Park on Tuesday night, nearly a year to the day that the Brewers and American Family Insurance announced a 15-year naming rights partnership for the stadium.

Packers coach Matt LaFleur — who was irked by his players' lack of urgency in Sunday's loss to the 49ers in the NFC title game — met with Mike Pettine on Wednesday and told the defensive coordinator he will return next season.

Max Glass almost got away with it without his coach knowing.

PADDOCK LAKE — Through the first four minutes of the third quarter Friday night, it looked like a typical Central-Wilmot boys basketball clash.

WILMOT — When it comes to dominating pitchers in recent memory around these parts, no list worth its salt can start without former Wilmot star…

The team will have 15 unrestricted free agents, a group that includes three of the four players remaining from the 2010 team that won Super Bowl XLV: right tackle Bryan Bulaga, kicker Mason Crosby and cornerback Tramon Williams.

Bradford’s Haley Christianson, middle, fights through the double team of Indian Trail’s Jasani Williams, left, and Kalina Winslow, right, earlier this season at the Bradford Fieldhouse. In the rematch Tuesday night at Indian Trail, Winslow scored a team-high 18 points to lead the Hawks to a 44-40 Southeast Conference win.