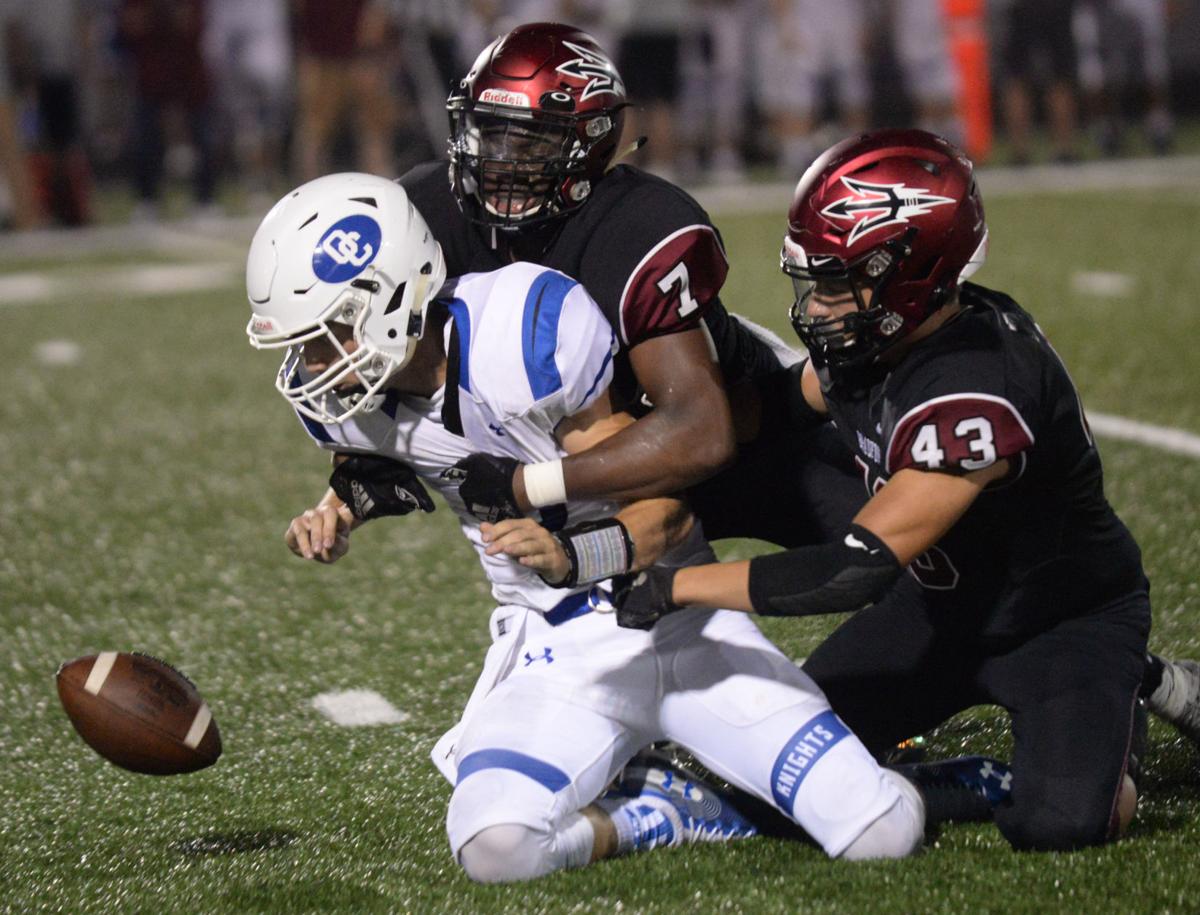 Bradford teammates Mylan Smith (7) and Ethan Pergande (43) combine to force a fumble during a Southeast Conference contest against Oak Creek on Sept. 20. The Red Devils will hit the road tonight for the first round of the WIAA playoffs. 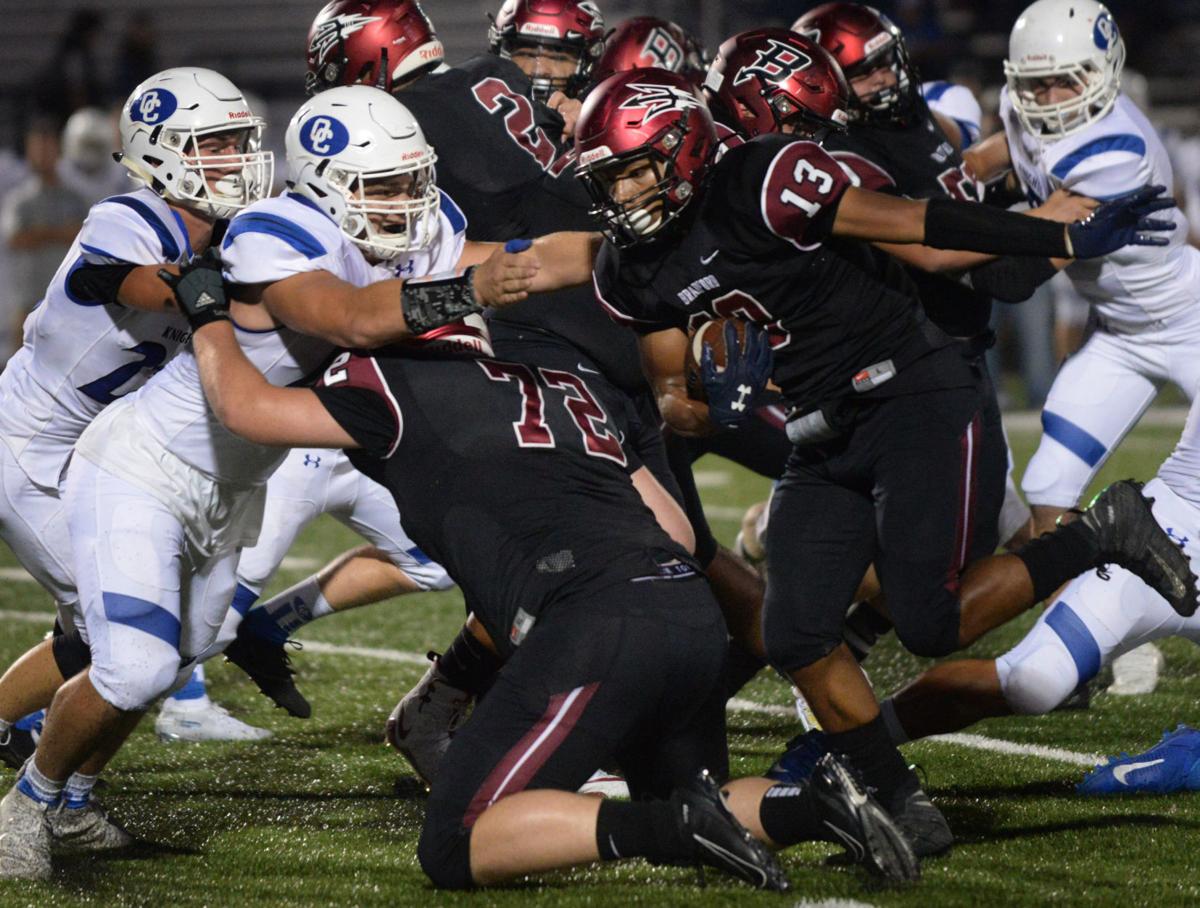 Bradford’s Will Darden (13) runs off a block by Jake Sykora (72) on Friday night. 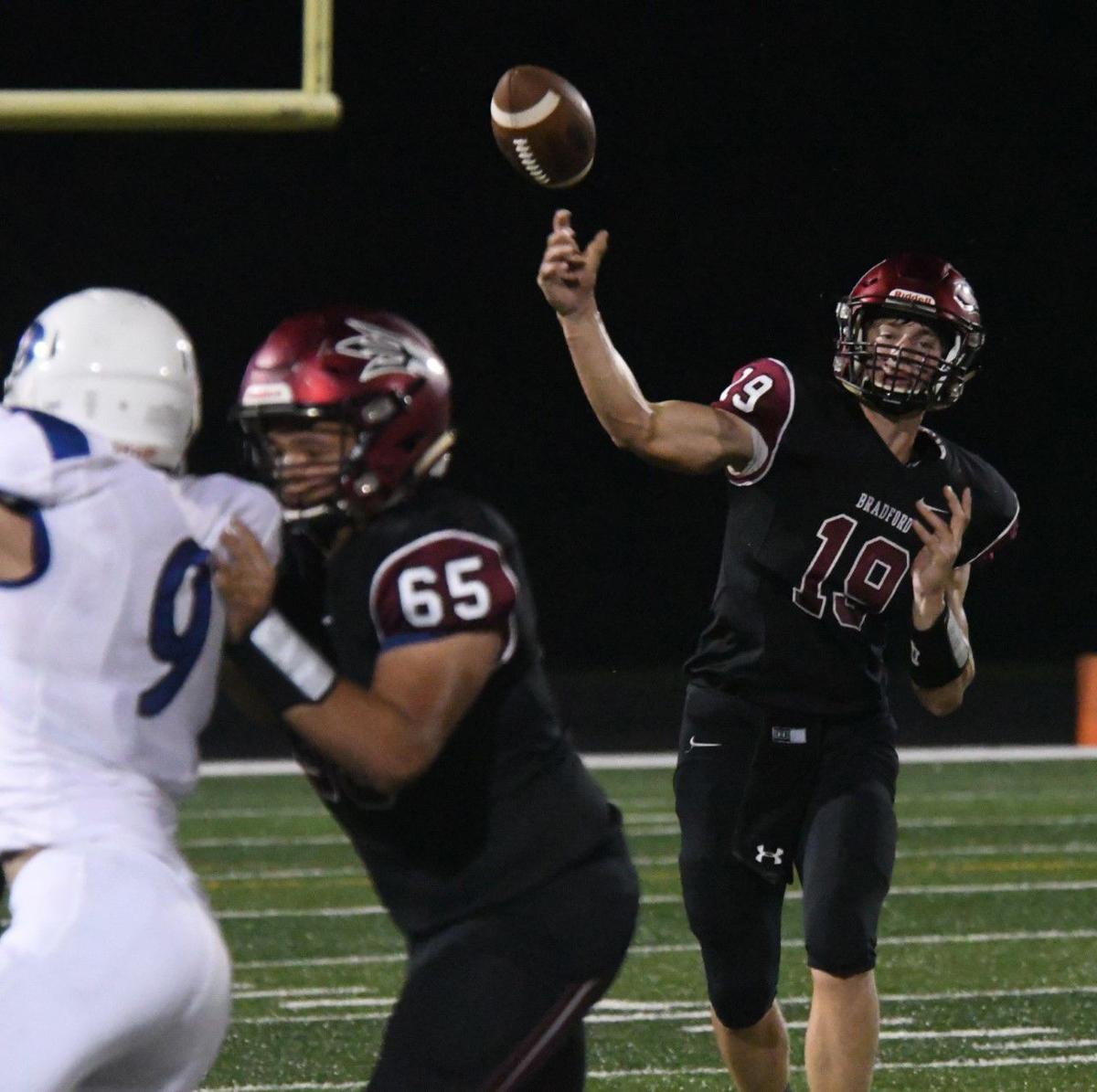 Finding some offensive consistency has not been an easy proposition in recent times for the Bradford football team.

Bradford held a slim 7-6 lead over visiting Oak Creek at halftime, but the Knights scored 22 unanswered points in the third and fourth quarters en route to a 28-7 Southeast Conference victory.

Coming into the contest, the Red Devils (1-4, 1-2 SEC) had averaged just 10 points a game in their last three.

Everything on that side of the football came down to execution, Bradford coach Troy Bowe said.

“We don’t execute,” he said. “We have two or three kids on every play who do the wrong thing, and that’s on us as coaches. We have to do a better job coaching them so there is no question that they do the right thing. You have to block. It’s hard to play offense if you don’t block anybody.”

Momentum swung to the Knights (3-2, 2-1) almost immediately after it looked like it might belong to the Red Devils midway through the third quarter.

With Oak Creek driving, Bradford sophomore defensive lineman Jared Barden stepped in front of a screen pass at the Red Devils’ 35-yard line and returned it to the Knights’ 20.

For a moment, it looked like Barden may take it all the way back to the end zone, but he was caught after a 45-yard return.

“It was some sort of screen, and it looked like to me they just threw it right to him,” Bowe said. “Jared runs real well for a d-lineman. Unfortunately, he cut back and got caught. At that point, that may have been the only way we were going to score.”

Oak Creek cashed in five players later on a slant pass from quarterback Ryan Hock to Nathan Gladney, who out-ran the Bradford defense for a 70-yard touchdown. Hock added the two-point conversion to give the Knights their first lead of the night at 14-7.

The fourth quarter was all Knights.

Oak Creek completed an 11-play, 90-yard scoring drive with a 6-yard touchdown by Hock on a quarterback draw, followed by a 7-yard run by Lucas Gallett to close out the scoring.

A Bradford fumble recovery by Ricky Calero with 3 minutes, 44 seconds left in the first quarter led to the first points of the night.

Senior running back Will Darden broke several tackles and applied a nicely placed stiff arm for a 22-yard gain on the first play of the drive, which ended two plays later on a 1-yard touchdown run by Olson.

Two field goals by Oak Creek senior kicker Dragan Kesich, including a booming 45 yarder, followed by another from 26 yards out, cut the Bradford lead to just a point at the intermission.

Seven of Bradford’s offensive possessions ended with a punt. The Red Devils finished the night with just 21 yards rushing on 25 carries (including yards lost by sack).

Olson completed 17-of-31 passes for 224 yards, including five for 59 yards to Michael DeLuca and four for 45 to Darden.

Darden led the rushing attack with 11 carries for 29 yards.

Figuring out a way to get the entire offensive unit on the same page continues to be a focus, Bowe said.

“We have to execute way better,” he said. “That’s the theme all year. We don’t execute. ... On offense, if you don’t have 11 guys executing, plays don’t work. We have to get better at executing plays.”

Hock did most of his damage with straight quarterback draws or on the option, which didn’t come as a surprise, Bowe said.

“We knew with (him) in there that they were going to run the ball all the time,” he said. “If we could get them passing, that was to our advantage.

“Our offense has to do a better job executing to keep our defense off the field. Those poor kids just played too much. ... They kept us in the game. They just played way too many snaps.”

Bradford teammates Mylan Smith (7) and Ethan Pergande (43) combine to force a fumble during a Southeast Conference contest against Oak Creek on Sept. 20. The Red Devils will hit the road tonight for the first round of the WIAA playoffs.

Bradford’s Will Darden (13) runs off a block by Jake Sykora (72) on Friday night.