Become a Member
Read Today's E-edition
Share This
After NFC title game ‘failures,’ Packers’ Kevin King stays put, ready to ‘uphold my side of the bargain’
0 Comments
Share this
JASON WILDE For the State Journal

GREEN BAY — Kevin King could have left. And in the opinion of some of the more emotional, angry members of the Green Bay Packers’ passionate fan base, should have left.

That would have been the easier route, right? Get a fresh start somewhere else. Escape any reminders of his costly NFC Championship Game mistakes. Perhaps shake the rotten injury luck he’s had for most of his NFL career. Leave the state where the mere mention of his name reminds fans they could have had a homegrown pass-rushing hero — former University of Wisconsin linebacker T.J. Watt — instead.

“No. No. No,” the Packers fifth-year cornerback said during a Q&A session with reporters after Tuesday’s practice, the first time he’s spoken with the media since theseason-ending 31-26 loss to the Tampa Bay Buccaneers on Jan. 24.

“Look, I’m not the type of guy that just tries to sweep (expletive) under the rug. ‘All right, let me get a fresh start somewhere.’ No. No. I want to finish this with my guys — the guys who’ve believed in me and the guys who continue to believe in me. And I’m going to do my part to uphold my side of the bargain, but … we’re here to win a Super Bowl. I just want to do my 1/11th on defense, and that’s what I’m here to do.

Instead, he returned to a team that, after re-signing him to a one-year, $5 million deal, used its first-round draft pick on another cornerback — Eric Stokes, who took most of the snaps with the No. 1 defense while King started training camp on the non-football injury list because of a hamstring injury.

The Packers activated King on Aug. 12, and he’s worked with the starters since his return to full participation in practice. Defensive backs coach/defensive passing-game coordinator Jerry Gray said earlier in camp he doesn’t believe players should lose their starting jobs because of injury, and based on coach Matt LaFleur’s praise for King on Tuesday morning, he figures to be the starter opposite Jaire Alexander in the Sept. 12 regular-season opener at New Orleans.

“He’s a guy I have a lot of faith, a lot of confidence in,” LaFleur said. “I think when he’s healthy, he’s really tough to deal with. He was a guy I was super-excited to get back. He’s a resilient guy. He’s a smart guy. I think our value (of him) within our building is much higher maybe than public perception is out there.“

But that three-word caveat — “when he’s healthy” — is one that has been uttered all too often about the 26-year-old King.

In his first four seasons, the 2017 second-round pick played in only 41 of a possible 64 regular-season games because of various injuries, including missing five games last season with a quadriceps injury. He actually missed more games during his first two seasons (17) than he played in (15).

In 2019, when he took a more professional approach to his offseason conditioning and lifestyle, it altered the trajectory of his career. He wound up having his healthiest and best season, playing in a career-high 15 games (14 starts) and leading the Packers in interceptions with five.

“Of course we’re all human; we’re going to go through those ebbs and flows of emotions,” King said. “But that’s how you know you’re doing something worthwhile — because it’s not going to be easy. It shouldn’t be easy. You know? Guys are dealing with injuries all type of ways, and guys have gotten through it. If anybody can get through it, I can.”

Mentally, King had to get through the disappointment of being part of two game-changing plays that left the Packers on the doorstep of a Super Bowl for the second straight year. He said he worked with Dr. Chris Carr, the Packers’ on-staff sports psychologist (official title is director of performance psychology and team behavioral health clinician) this offseason, and from the tenor of King’s session with reporters — he repeatedly spoke of being “the best version of Kevin” he can be and focusing on routines and processes instead of results and outcomes — it has had an effect.“If I’m doing my part, then the results, they’ll come,” King said. “And (through) those ups and downs, I just keep doing my part. Eventually, I’ll get to where I need to be.”

King did speak Tuesday about the two game-changing mistakes he made against the Buccaneers: Misplaying a Tom Brady pass to Scotty Miller that went for a 39-yard touchdown and gave Tampa Bay a 21-10 halftime lead, and a fourth-quarter, third-down pass interference penalty on an incomplete pass to Bucs receiver Tyler Johnson that resulted in an automatic first down and allowed Brady to run out the clock.

LaFleur admitted in the days after the loss the Miller touchdown was in part because of a sideline miscommunication with him and then-defensive coordinator Mike Pettine — “Unfortunately, (the blame) doesn’t rest solely on him; that’s the responsibility of myself and our coaching staff,” LaFleur reiterated Tuesday — but King declined to get into specifics of what the miscommunication might have been.

And while he opted for a little gallows humor when asked about the penalty — “I might have gotten a little bit of his shirt,” he said — it’s clear the loss still haunts him.

“Get over it? Things like that, I don’t know if you ever necessarily get over,” King admitted. “But it’s a learning experience.” You listen to all these guys who have the greatest success stories, they’ve all used those quote-unquote ‘failures’ as turning points. I’ve challenged myself all offseason and continue to challenge myself to come out better from that situation so quote-unquote ‘failure,’ that’s just a word.

And now, with Stokes challenging him for his starting job, he’ll have to keep that attitude. King had a nice pass break-up during Tuesday’s practice on an Aaron Rodgers pass to Marquez Valdes-Scantling on an out route, but he’ll still have to stay consistent — and healthy — to stay in the lineup for a team he believes is headed to Super Bowl LVI.

“I really didn’t want to be nowhere else, to be honest,” King said. “I feel like we have the pieces to get over that hump. I just want to do my part in that, so I’m excited and I’m ready to go.” 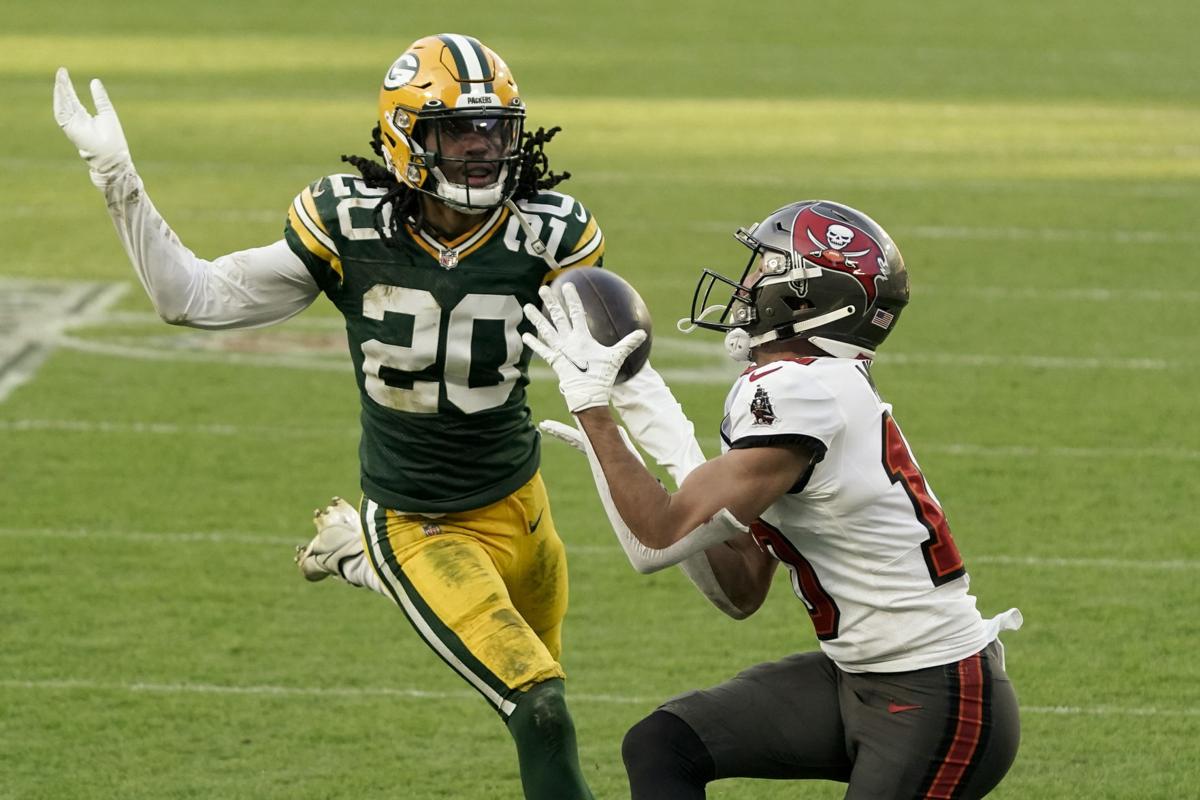 Buccaneers' Scott Miller catches a 39-yard touchdown pass against Packers' Kevin King during the first half of the NFC Championship Game. 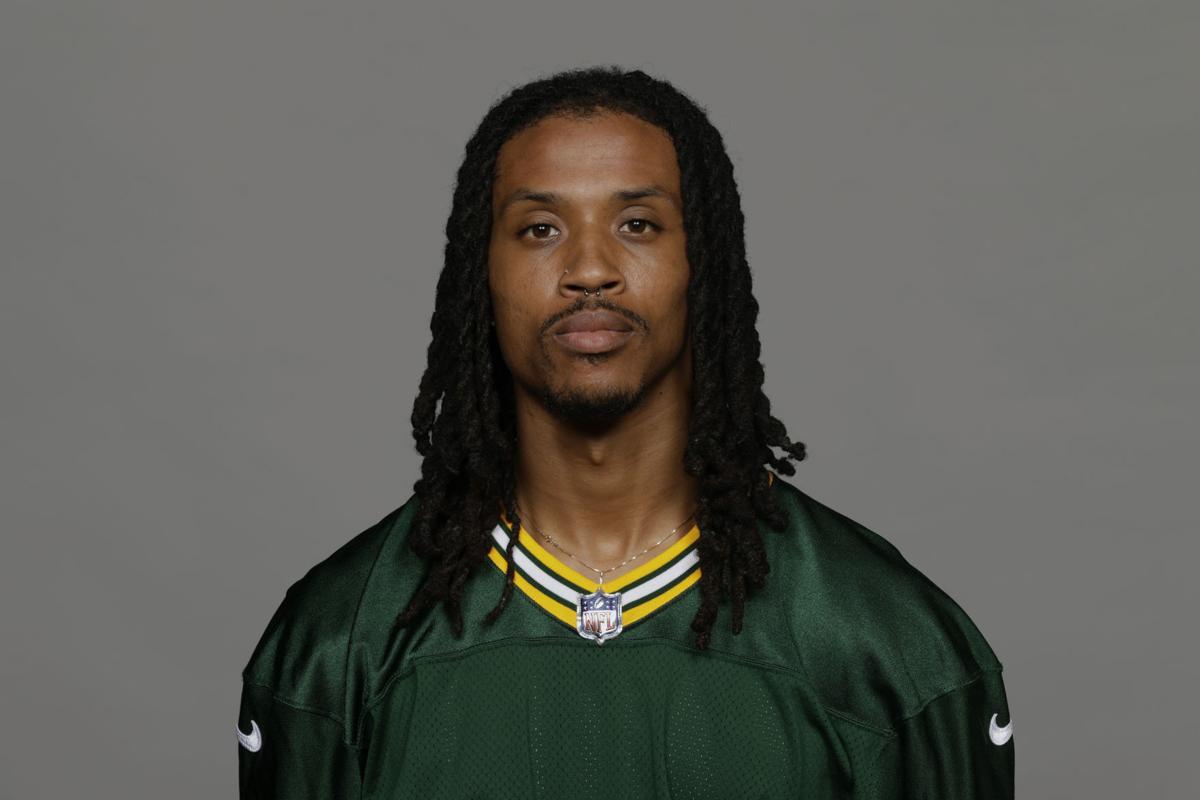