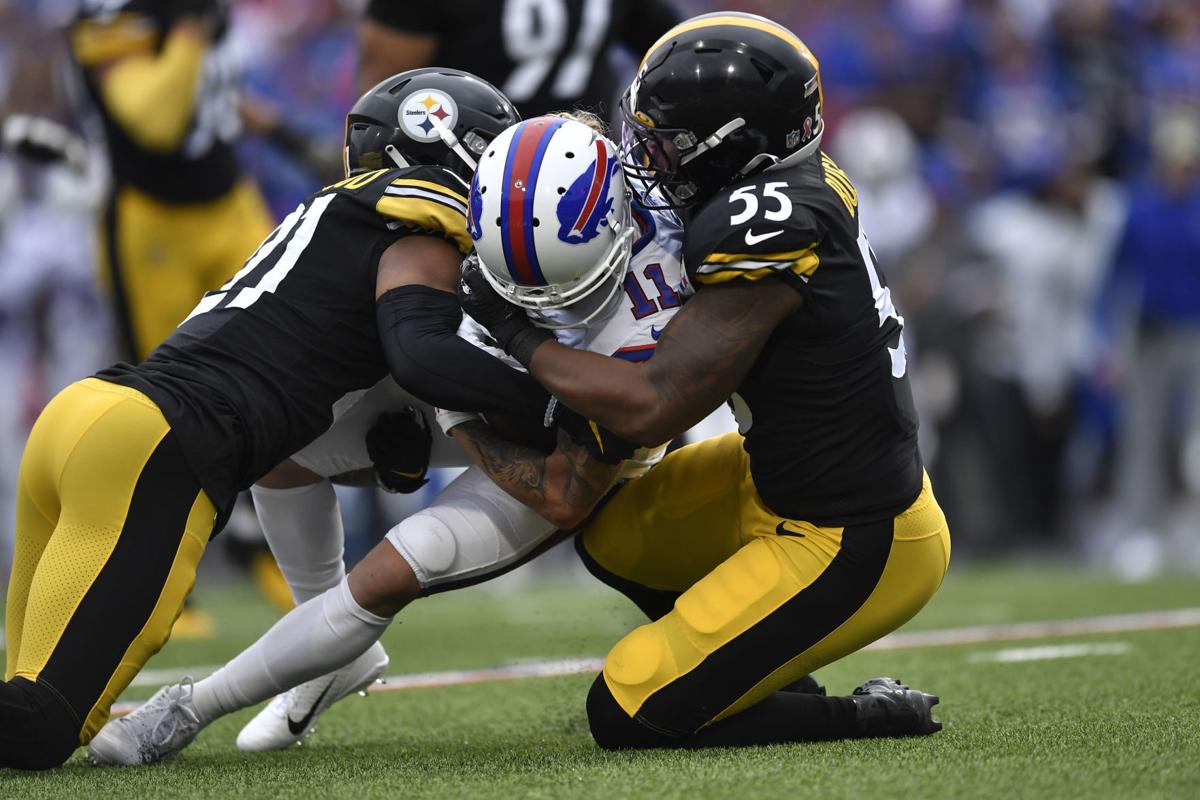 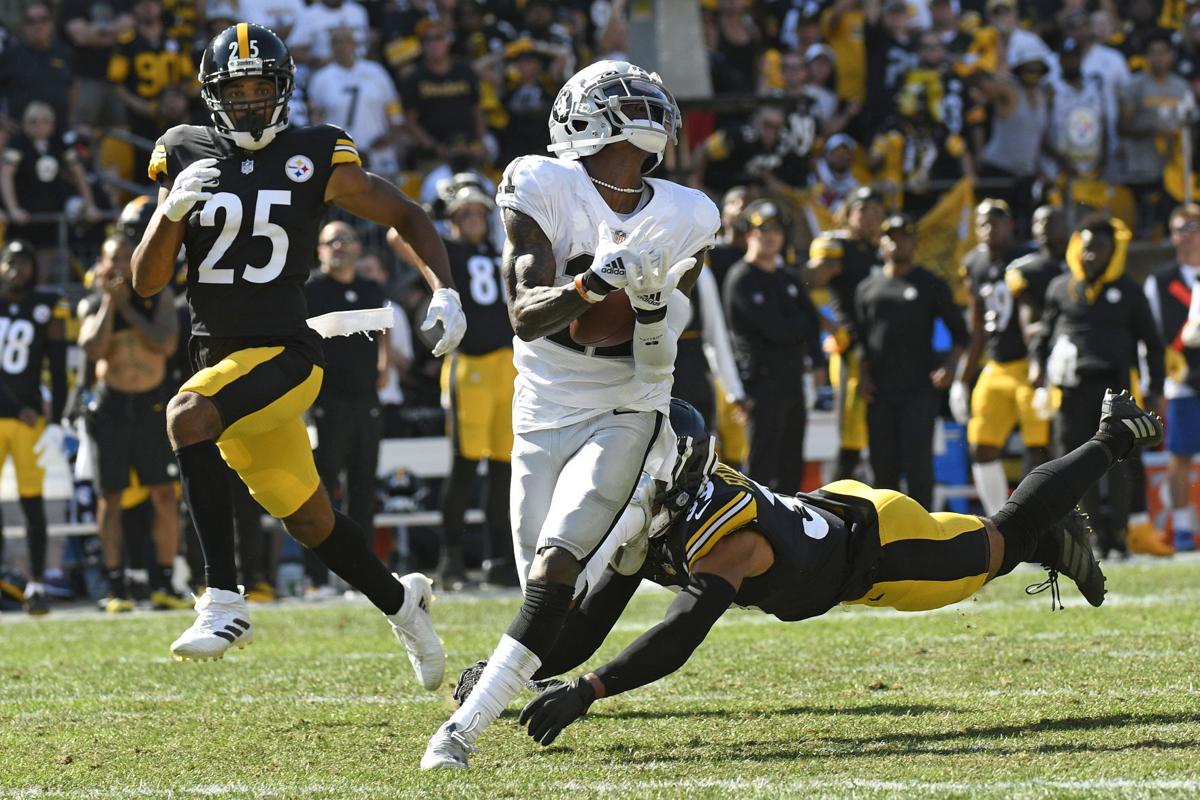 Las Vegas Raiders wide receiver Henry Ruggs III (11) hauls in a pass from quarterback Derek Carr between defenders Pittsburgh Steelers free safety Minkah Fitzpatrick (39) and cornerback Ahkello Witherspoon (25) and takes it for a touchdown during the second half of an NFL football game in Pittsburgh, Sunday, Sept. 19, 2021. The Raiders won 26-17. (AP Photo/Don Wright) 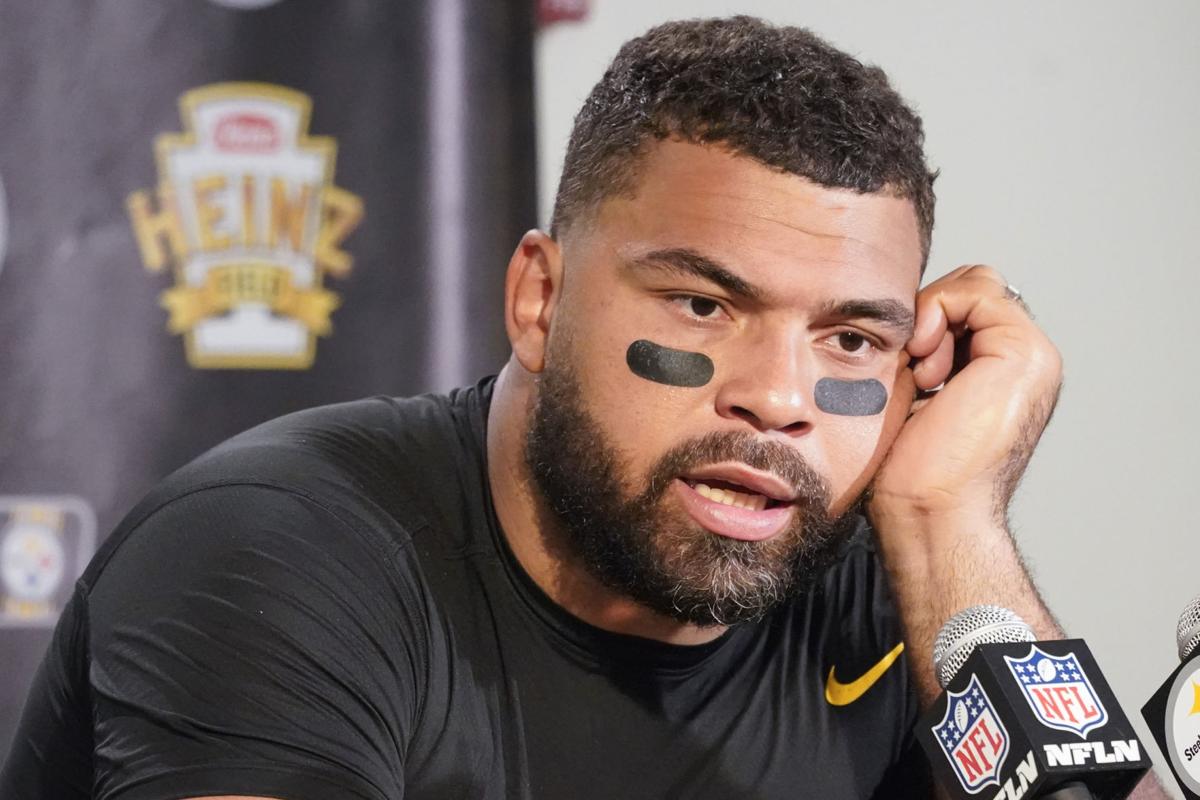 PITTSBURGH — Cam Heyward is tired of listening to critics pile on Ben Roethlisberger and the rest of the Pittsburgh Steelers offense.

Last time the longtime defensive end checked, the entire team was 1-2. That includes a defense that failed to get a sack for the first time in more than four years in a 24-10 home loss to Cincinnati last Sunday.

Yes, starting outside linebackers T.J. Watt and Alex Highsmith sat out with a groin injury. Yes, they were replaced by a rotation that included veteran Melvin Ingram — signed in July — and relative unknowns Jamir Jones and Derrek Tuszka. Yes, the defensive line is missing injured starters Tyson Alualu and Stephon Tuitt.

In a place where “the standard is the standard” might as well be taped over every locker, Heyward allows it's not fair to expect Jones — a rookie who was waived on Monday — to replace an All-Pro such as Watt.

“It is fair to win the game,” Heyward said Thursday. “It's fair to be the best person you can be on Sunday. We're not asking anybody to replicate what someone else does. But we're asking them to just help us get a ‘W.’”

Something that's happened just once through three weeks, with a visit to Green Bay to take on Aaron Rodgers and the Packers (2-1) looming on Sunday.

While Roethlisberger and an offense featuring four rookie starters as well as a first-year offensive coordinator are all in the midst of some very public growing pains, the defense has lost a bit of the swagger that's become its signature under longtime defensive coordinator Keith Butler.

Not only did the Steelers fail to take down Burrow, they also failed to get a single hit on the second-year quarterback. His white No. 9 jersey was as pristine when he took the final snap as it was when he took the first. In between, Burrow lit up Pittsburgh for three touchdown passes.

The absence of Watt and Highsmith on the edge forced Butler to alter his game plan a bit and take fewer chances by design. The Steelers are also calling fewer blitzes than they have in recent years.

They didn't have to in the season opener when Watt and Heyward harassed Buffalo star Josh Allen all afternoon in what became a 23-16 upset that is running the risk of looking like an anomaly. They didn't against the Bengals perhaps because they didn't want to expose a secondary that's still in a bit of flux with second-year man James Pierre taking over on the outside for veteran Steven Nelson, who was cut in the spring in a salary-cap move.

Given time to throw and a running game that kept Pittsburgh off-balance, Burrow completed 14 of 18 passes and connected with rookie Ja'Marr Chase for a pair of touchdowns, including a 34-yard rainbow late in the second quarter in which he sprinted past Pierre into the end zone for a score that turned the game's momentum for good.

Getting their hands on the ball a little more often would help. Pittsburgh has just one interception through three games, a first-half pick of Burrow by Terrell Edmunds in which Burrow's pass smacked off Steelers safety Minkah Fitzpatrick's helmet and fluttered into Edmunds' hands.

Otherwise, quarterbacks have proven plenty capable when Pittsburgh's rush fails to get to them. In the six quarters since Watt tweaked his groin just before halftime of a loss to Las Vegas on Sept. 19, Burrow and Raiders QB Derek Carr combined to complete 76% of their passes for 433 yards with five touchdowns and just one interception.

Pittsburgh is hopeful both Watt and Highsmith will return on Sunday. Regardless, with the offense still scrambling to find an identity, the defense can't afford to be ordinary, something it's been each of the past two weeks. Pittsburgh is 12th in points allowed and 13th in yards allowed after being third in both categories while winning the AFC North last winter.

To get back to that level, the younger players need to learn quickly. Butler said the ability to avoid the same mistake twice is what helps players not just earn a roster spot in the NFL but stick around for a while. It's quickly becoming that time for Pierre, third-year linebacker Devin Bush and others to start taking that step forward.

“I'll just say we were all young, we were all just kids at one time, even Ben was a kid at one time," the 32-year-old Heyward said of the 39-year-old Roethlisberger. “Just because you're young doesn't mean you can't be good in this league. It comes down to your preparation, your execution and then just doing it on Sunday.”

Green Bay bound: Get to know all 9 players picked by Packers in 2021 NFL Draft

With news of the rift between Aaron Rodgers and the Packers breaking just before the 2021 NFL Draft kicked off, Green Bay fans can be forgiven…

Defining moments: Packers’ 5 most consequential trades since the team’s renaissance began in 1992

Las Vegas Raiders wide receiver Henry Ruggs III (11) hauls in a pass from quarterback Derek Carr between defenders Pittsburgh Steelers free safety Minkah Fitzpatrick (39) and cornerback Ahkello Witherspoon (25) and takes it for a touchdown during the second half of an NFL football game in Pittsburgh, Sunday, Sept. 19, 2021. The Raiders won 26-17. (AP Photo/Don Wright)