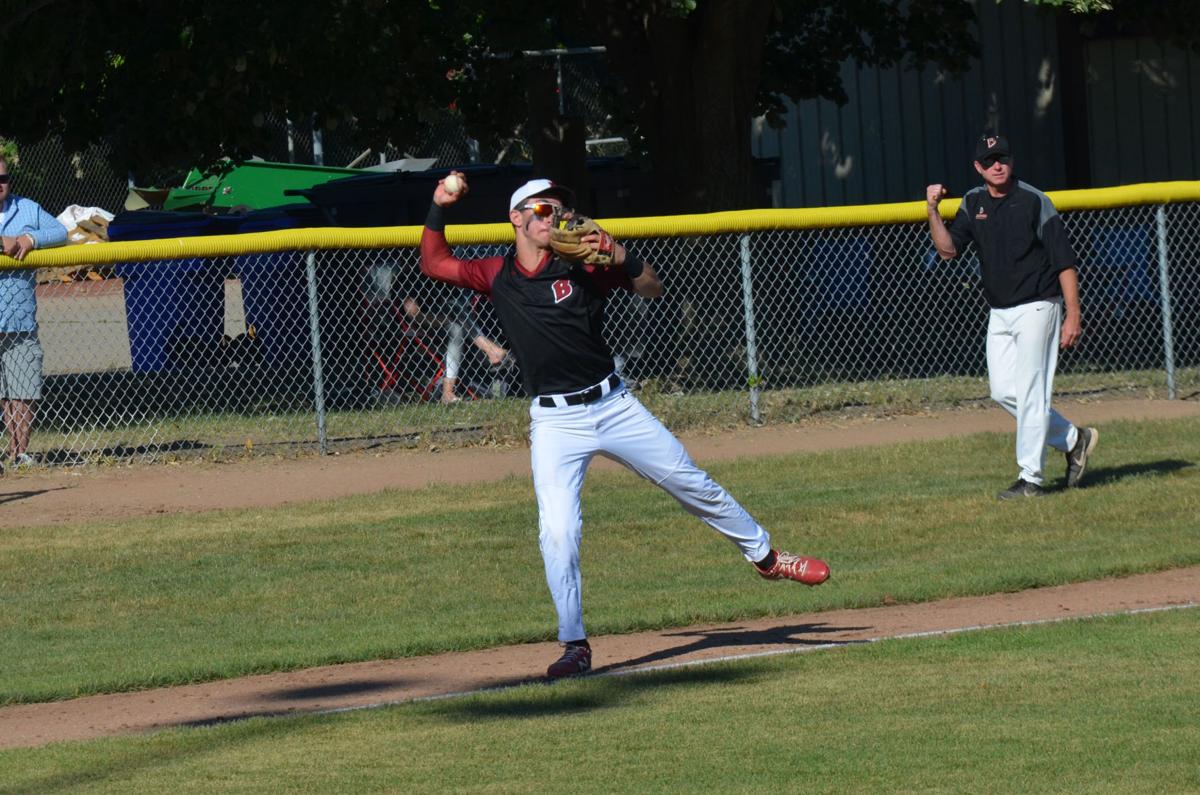 Badger third baseman Crete Slattery throws off-balance after charging a bunt during the team’s playoff game against Burlington on June 15. 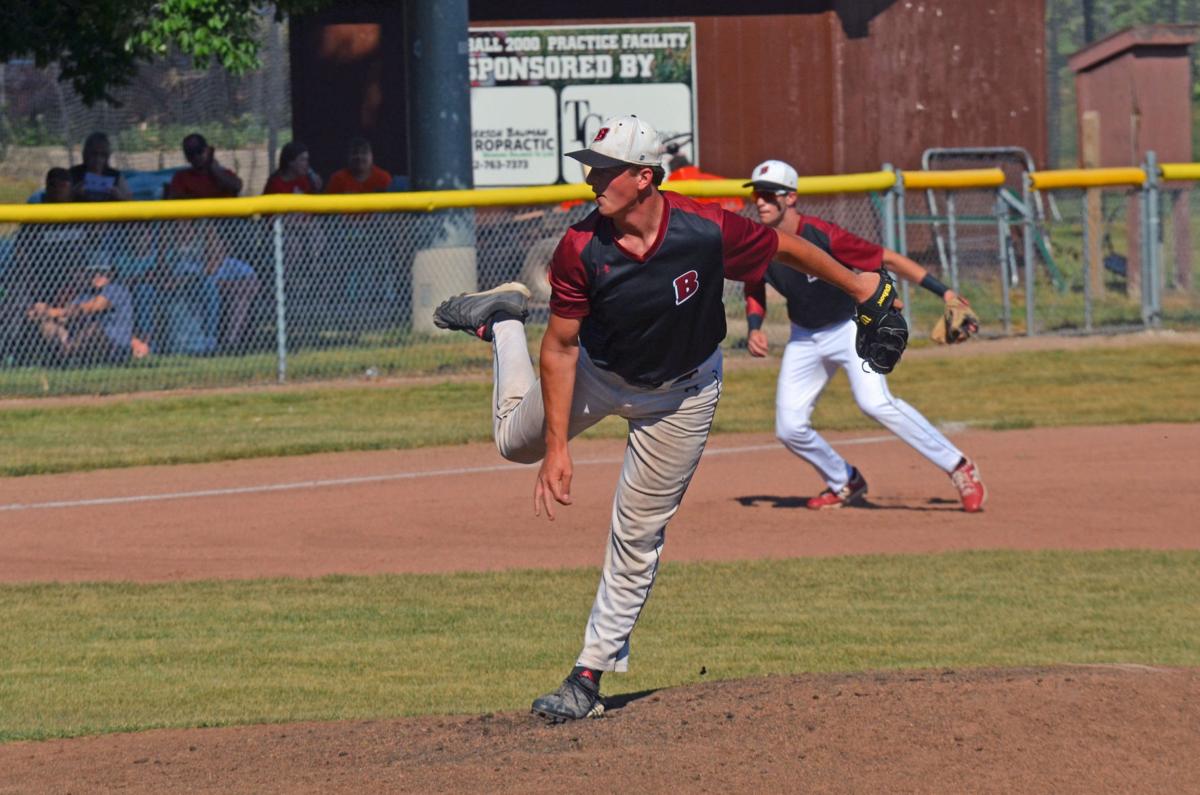 Badger starting pitcher Zach Lindbloom follows through on a pitch during the team’s 5-0 playoff loss to Burlington on June 15. 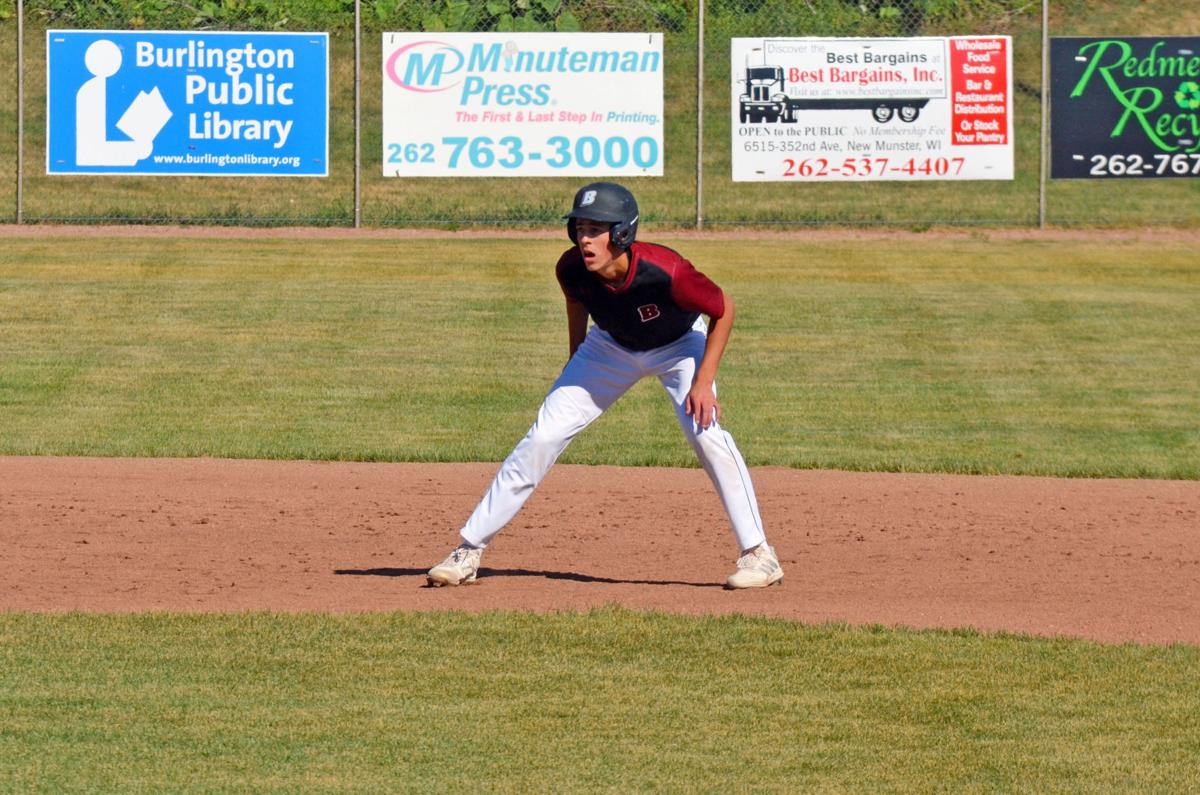 Badger junior Mason Parent takes a lead off second base during the team’s playoff loss in Burlington on June 15.

BURLINGTON — Heading into their first playoff game, the Badger baseball players and coaches knew they would have their hands full.

The team was set to travel to face Southern Lakes Conference rival Burlington in the opening round on June 15, and considering the Demons defeated the Badgers by 4-0 and 9-4 scores in the regular season, it would take a major improvement for Badger to pull off a victory.

Even so, the team had a positive attitude heading into the contest.

“We knew it was an uphill battle, but we also believe in these guys,” co-head coach Beau Roddy said.

Burlington played as well as they did in the regular season, though, ending the Badgers’ 2021 campaign with a 5-0 shutout.

This is far from the first time the Demons have seen postseason success, as Burlington won a state championship in 2016 and advanced to the state tournament four-straight seasons from 2016 to 2019.

Things did not get off to a great start for Badger, as a pair of defensive errors in the first inning led to two Burlington runs, and one more mistake in the second led to another Demons run for a 3-0 deficit after two innings.

It has been a common thread all year for the team to squander solid pitching performances and putting extra pressure on the offense with avoidable mistakes.

“That’s kind of been the story of our season so far, a couple errors early leads to some runs and then we’re playing catch-up,” co-head coach Mike Ploch said.

Catching up was a tall task against Burlington’s senior pitcher Kale Dietz, who had six strikeouts in the first two innings and struck out a total of nine batters in his 5 and 1/3 innings of scoreless work.

It was a season-defining performance by the senior, who responded to the pressure-packed situation by efficiently confounding the Badger batters and likely could have thrown a complete game shutout if not for statewide pitch count rules.

“I thought he pitched probably his best game of the season,” Demons coach Scott Staude said. “He was keeping them off-balance with his curve ball and he did a really nice job of not getting deep in the counts. We had to get him out because of the 100-pitch count, but he did an excellent job.”

Badger’s pitchers did not have a perfect day, but they did not perform terribly. Senior Zach Lindbloom started the game and threw 3 and 1/3 innings, allowing four runs and striking out three batters. Junior Mason Parent threw 2 and 2/3 innings with only one run allowed and three strikeouts.

While the Badgers had a young squad, with a number of freshmen and sophomores playing significant roles, the program’s quartet of seniors saw their careers come to an end. Although Roddy and Ploch hope their contributions will live on in spirit.

“The leadership and the hard work that they put in will carry on into next year. The young guys were able to see their leadership and it goes on to the next generation,” Roddy said.

As for the young players that are returning, including the team’s ace pitcher Tyler Deleskieiwicz and the top four hitters in the lineup, the loss starts the beginning of a much more normal offseason than last summer in which they can hone their craft with the lessons they learned.

The Big Foot baseball team also saw its season come to a close on June 15, losing a 13-3 road game against Jefferson.

In Photos: 10 pictures from the Big Foot vs Badger baseball scrimmage

The senior catcher/pitcher had a .438 batting average with eight homers and 49 RBIs for the Division 1 state champion Cardinals.

Badger third baseman Crete Slattery throws off-balance after charging a bunt during the team’s playoff game against Burlington on June 15.

Badger starting pitcher Zach Lindbloom follows through on a pitch during the team’s 5-0 playoff loss to Burlington on June 15.

Badger junior Mason Parent takes a lead off second base during the team’s playoff loss in Burlington on June 15.