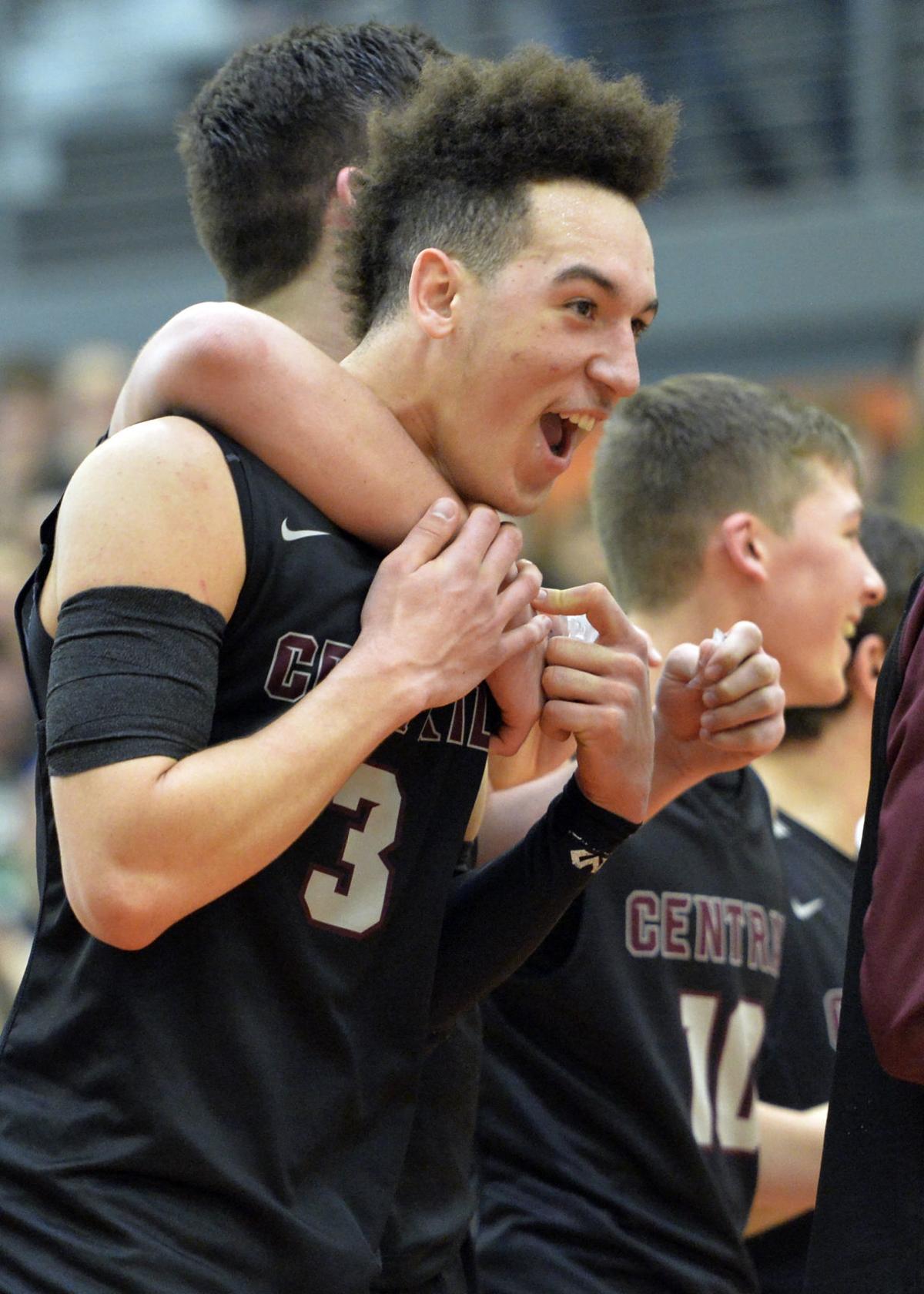 Central's Jaeden Zackery celebrates with teammates after the Falcons defeated Monona Grove in a WIAA Division-2 sectional final on March 10, 2018, to earn the first State Tournament berth in program history. Zackery was named the Kenosha News Boys Basketball Player of the Decade. 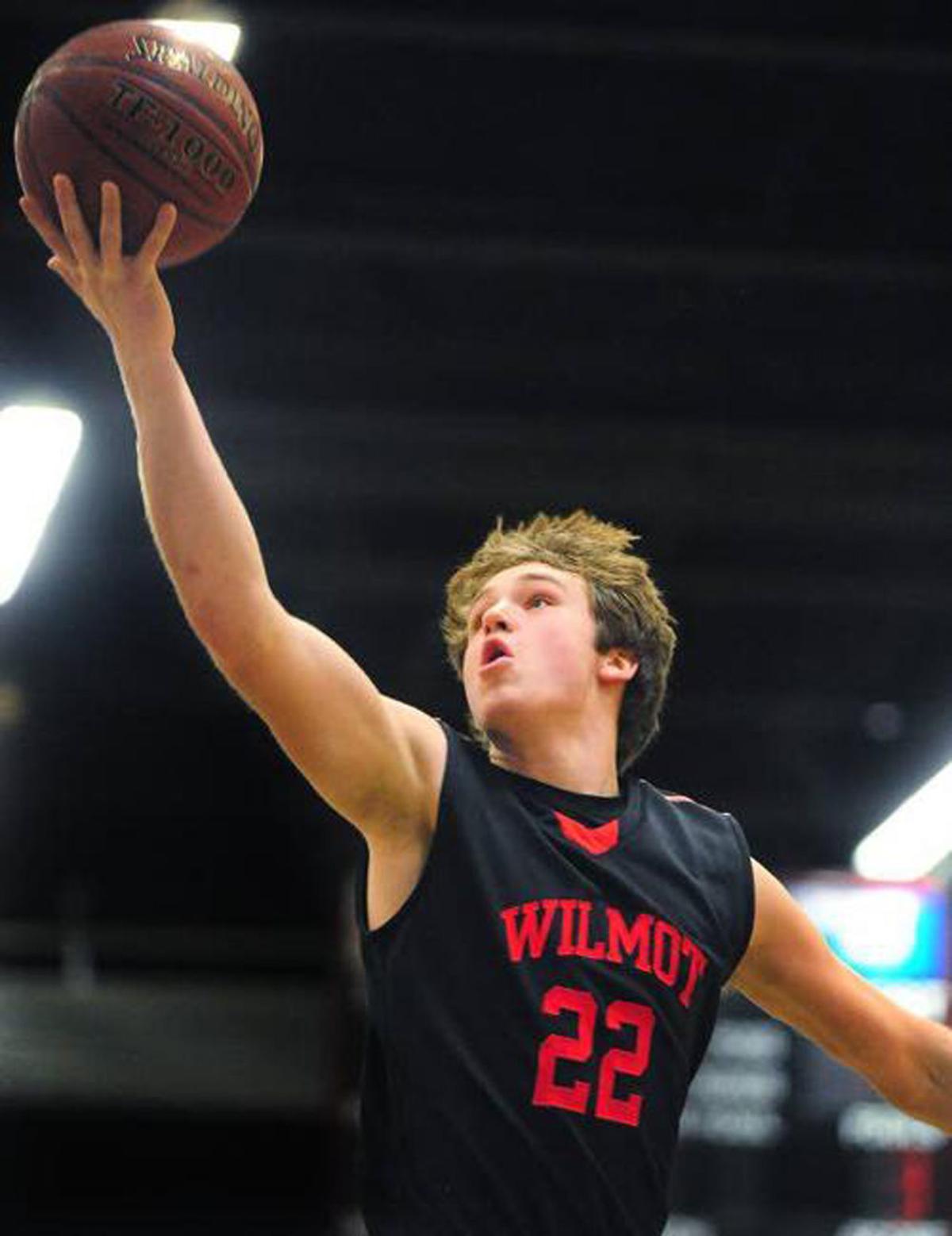 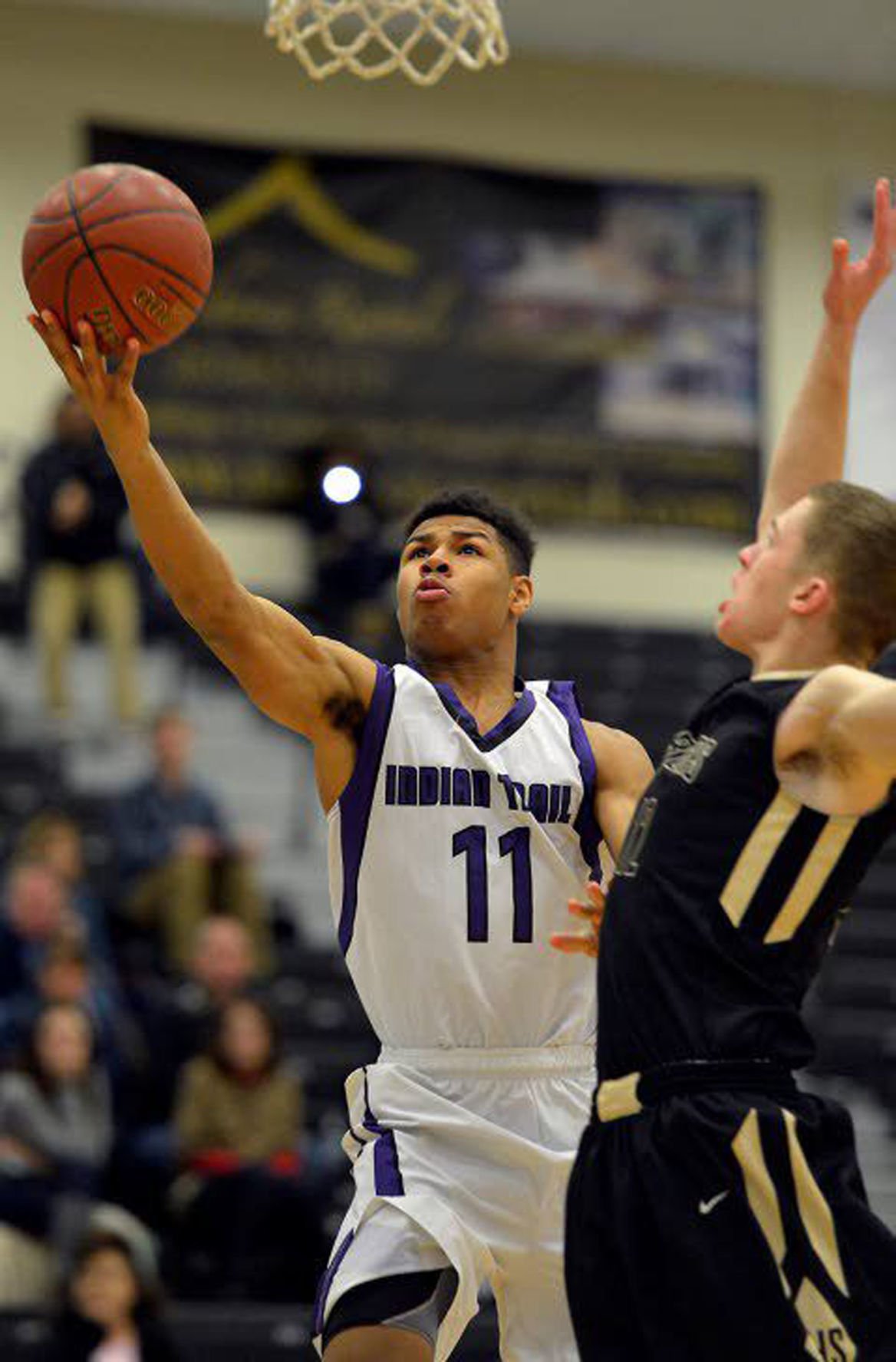 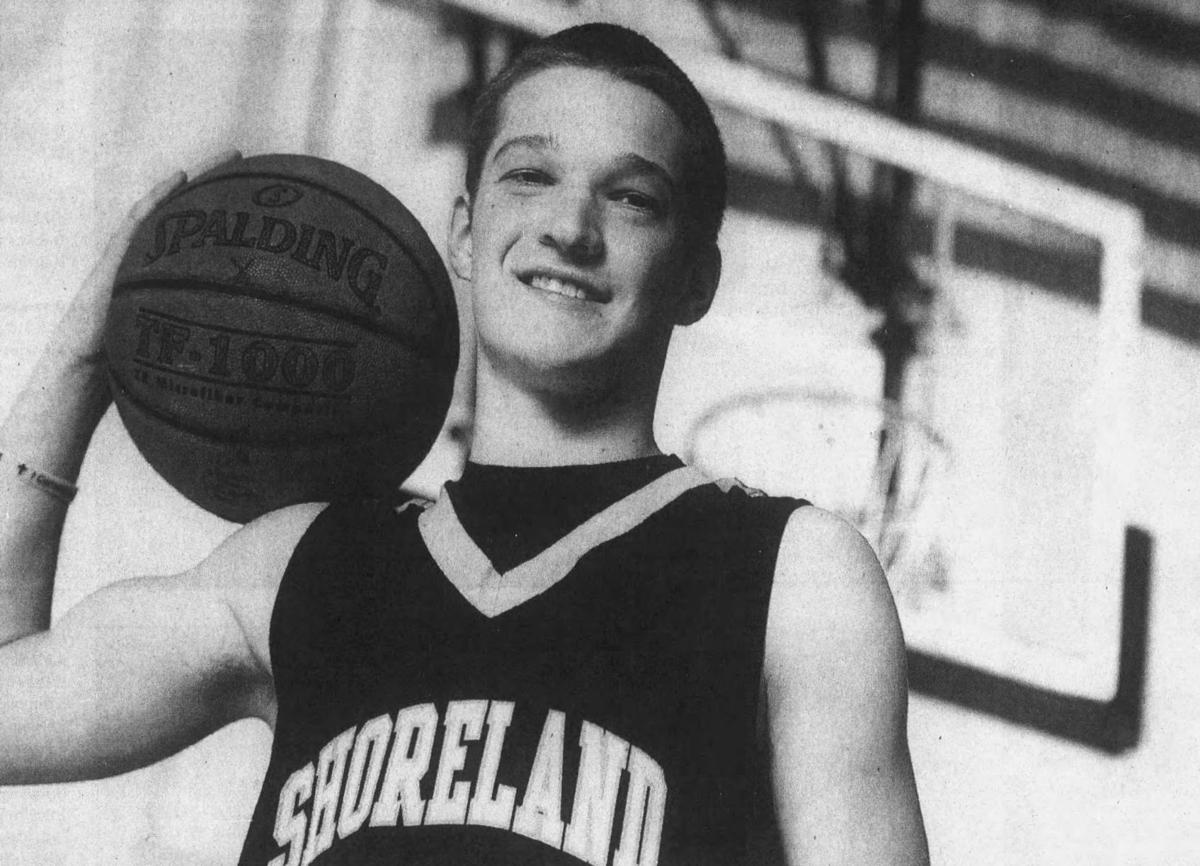 Adam Freitag is the only boys basketball player in Shoreland Lutheran history to be named first-team All-County in consecutive seasons, achieving the honor in 2011-12 and 2012-13. 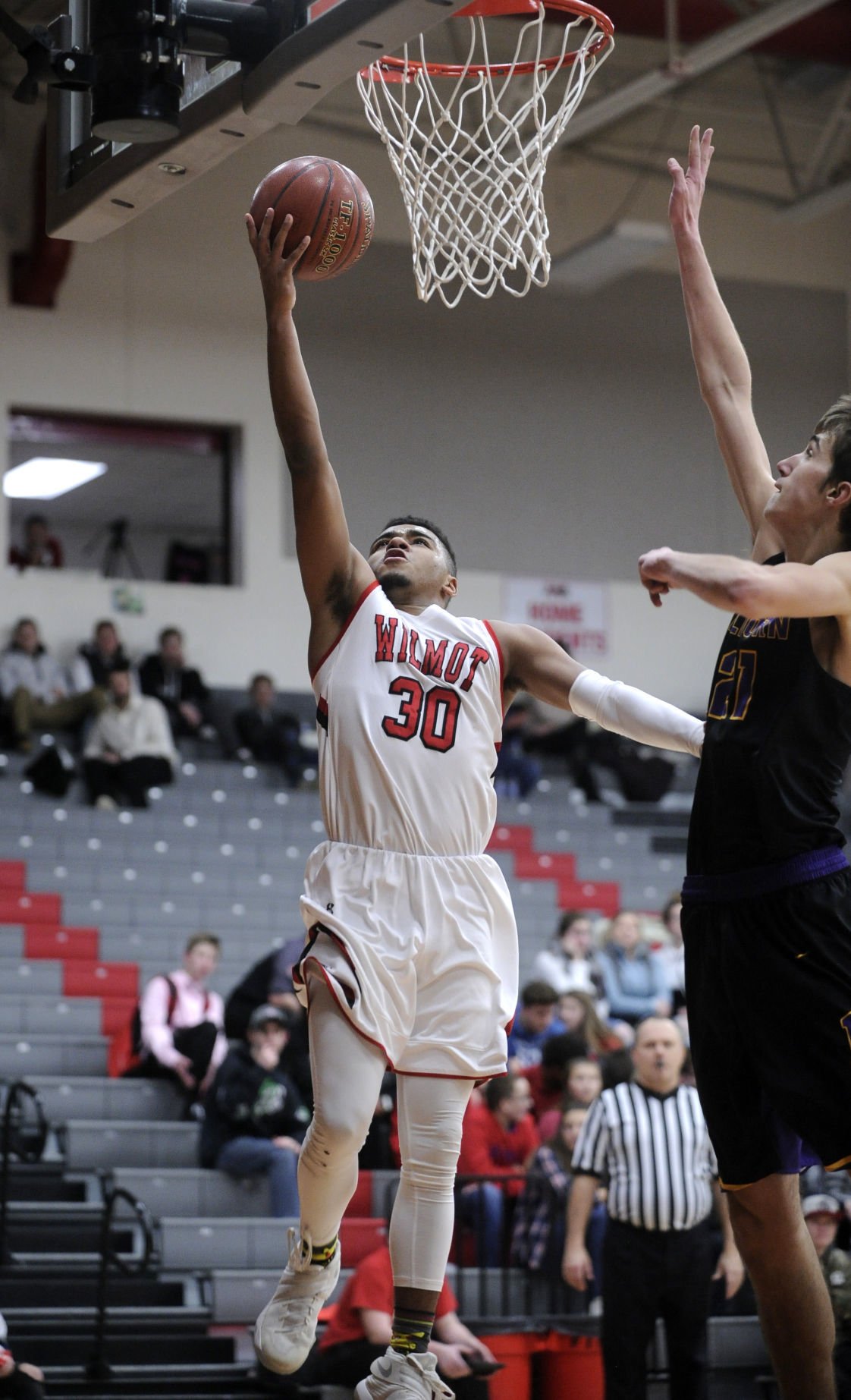 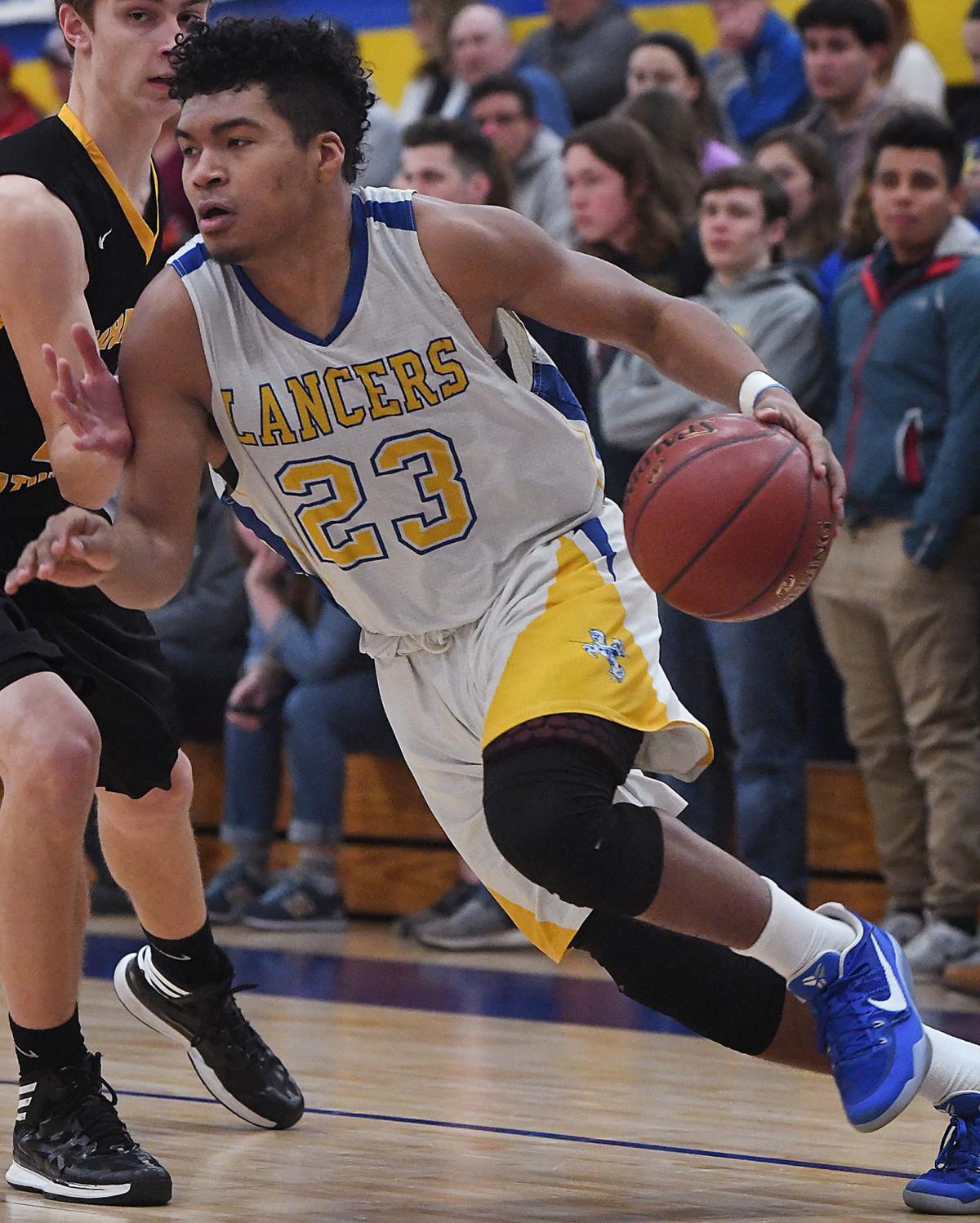 The 2010s were full of memorable moments for Kenosha County boys basketball.

In 2016, DeAndre Johns broke the great Nick Van Exel's St. Joseph career scoring record and Wilmot's Latrell Glass dazzled Delavan-Darien with a 49-point game. Wilmot's Bobby Brenner averaged 25.5 points per game and scored a staggering 1,248 points in just two seasons from 2014-16, and Bradford's De'Monte Nelson averaged 28.7 points per game in 2017-18 and with 1,641 points broke the school's career scoring mark of Jeff Cohen, which had stood since 1957.

The decade ended on a memorable note, too, for different reasons.

The 2019-20 Tremper squad streaked to the sectional finals and was a victory away from the program's first State Tournament berth since 2001, but the COVID-19 pandemic put a painful halt to the Trojans' remarkable run before they could finish it.

That's a lot of memories for a decade, but there's one that stands above the rest.

Really, could there be another choice?

In 2017-18, Central rode the sterling starting five of Jaeden Zackery, Adam Simmons, Dylan Anderson, Cooper Brinkman and Nic Frederick to the WIAA Division-2 State Tournament, the first state berth for the county since St. Joseph in 2003 — Tremper and St. Joseph both went in 2001 — and the only state appearance of the 2010s for a county team.

It's hard to imagine a county team playing more beautiful basketball than the Falcons did on March 10, 2018, when they dismantled Monona Grove, 76-55, in a sectional final at Oregon for the first State Tournament berth in program history.

The ride came to an end the next weekend in a hard-fought 75-63 state semifinal loss to Kaukauna, but that season came in the middle of a stupendous three-year run from 2016-19 in which Central went 65-13, won two Southern Lakes Conference titles and reached sectionals three times.

At the center of that was Zackery, the talented guard who controlled games on both ends of the floor and was a key cog for the Falcons all three of those seasons.

For that, Zackery has been named the Kenosha News County Player of the Decade for boys basketball. The 10-player All-Decade team was selected by Kenosha News sports editor Mike Johnson.

Capsules on the first five players, in alphabetical order, are below. Capsules on the other five players will appear in Monday's edition of the News. Each player's senior year is in parentheses. Available statistics are provided and were compiled via records from the News and WisSports.net.

Lowdown: Brenner played just two varsity seasons, but in those two seasons he became one of the most prolific pure scorers in county annals, pouring in a remarkable 1,248 points and averaging 25.5 points per game. ... The 679 points he scored during his senior season of 2015-16 are believed to be the most during a single season in county history since former St. Joseph star and future NBA All-Star Nick Van Exel scored 772 in 1988-89. ... Scored 20 or more points 42 times in 49 games, including in all 24 games of his senior season. ... Also had 10 games of 30 or more points in his career. ... Scored a career-high 39 against Central on 12-15-15. ... In the Panthers' run to the WIAA Division-2 sectional semifinals during his junior season, Brenner scored 20 points against Union Grove in a regional semifinal on 3-6-15, 22 against Central in a regional final on 3-7-15 and 23 against Monona Grove in a sectional semifinal on 3-12-15. ... Appeared in 16 games for NCAA Division III UW-Whitewater over two seasons from 2016-18.

Quotable: "He had an outstanding year, meeting the challenge of everyone else's best defense and still (managing) to score for us. It was an honor to coach him." Wilmot coach Jake Erbentraut, after Brenner was named first-team All-County his senior year.

Lowdown: Perhaps Brown didn't have the overall varsity career that the others on this list had, but his senior season was one of the most productive in county history. Brown led the Hawks to a three-way tie atop the Southeast Conference standings and the WIAA Division-1 sectional finals and was named first-team All-County, the SEC Player of the Year, WBCA Division-1 first-team All-State and AP second-team All-State in the process. ... He scored 20 or more points 12 times that season, 30 or more four times and 40 or more once, and his 20.7 points per game led the SEC. ... His 45 points during the season opener on 12-2-14 against Central tied for the 10th-most in a game that season by a state player. ... Also scored 38 on 1-24-15 against Lake Geneva Badger and 34 on 2-26-15 against Racine Case. ... Had a stellar four-year career at NCAA Division III UW-Whitewater, collecting All-Wisconsin Intercollegiate Athletic Conference first-team honors in 2017-18 and honorable mention accolades in 2018-19. Finished eighth in Warhawks history in free throws attempted, 10th in free throws made, 12th in steals, 14th in assists and 17th in field goal attempts. His 1,152 points also ranked 20th in program annals.

Memorable: Brown poured in a game-high 34 points on 2-26-15 at Racine Case as Indian Trail clinched a share of the Southeast Conference title in its regular-season finale.

Quotable: "I'm just so proud of everybody. I was listening to a podcast for our sectional and we weren't even mentioned. That motivated me, and when you're not getting a lot of respect, you earn it." Andre Brown, after he scored 34 points at Racine Case and Indian Trail clinched a share of the SEC title during his senior season.

Lowdown: The sharp-shooting Freitag is the only player in Shoreland boys basketball history to be named first-team All-County in consecutive seasons. ... In Freitag's three varsity seasons, the Pacers went 45-27 (.625 winning percentage) and reached the WIAA Division-4 regional finals twice. ... In his senior season, Freitag scored in double figures in all 23 of the Pacers' games and averaged 18.3 points per game. ... For his career, Freitag scored 20 or more points seven times and 30 or more once. ... He scored 29 points against St. Joseph on 12-11-12 and a career-high 31 in his final high school game, a loss to Milwaukee Young Coggs Prep in a regional semifinal on 2-22-13. ... Also played varsity soccer for four years and helped the Pacers to three regional titles. ... Played four years of basketball at NCAA Division III Edgewood College and led the team in 3-pointers made, 3-pointers attempted and free-throw percentage and finished second in scoring during his senior year of 2016-17.

Quotable: "I hung up the cleats. I'm playing basketball." Adam Freitag, on his decision to play basketball instead of soccer at Edgewood College.

Lowdown: The high scorer played varsity for four seasons, averaging 17.4 points per game as a junior and 19.0 per game as a senior. ... Scored 20 or more points 22 times in his career, 30 or more twice and 40 or more once. ... Played on two teams that reached the WIAA Division-2 sectional semifinals and scored 26 points to lead the Panthers to a regional final upset of Burlington on 3-4-17 during his junior year. ... Two highest scoring games came as a junior when he made nine 3s and poured in 49 against Delavan-Darien on 12-13-16 and made six 3s and scored 35 against Racine Park on 1-31-17.

Memorable: Glass put on one of the most electrifying performances in county history on 12-13-16. In an 89-84 Southern Lakes Conference overtime loss at Delavan-Darien, Glass set the Panthers' single-game record with 49 points, topping the 45 scored by Brandon Schattner on 1-17-14. Glass canned nine 3-pointers and went 8-of-8 from the free-throw line in finishing just a point shy of the 50-point mark.

Quotable: “The kid was unconscious. It was fun to watch — and he was on the other team. I found myself watching the kid. It’s not like we weren’t guarding him. We had a hand up in the face … you could see he was feeling it. It was incredible.” Delavan-Darien athletic director Guy Otte after Glass' 49-point game against the Comets.

Memorable: Gave county hoops fans something to remember during the Doctors of PT Holiday Classic at Carthage's Tarble Arena during his senior year, scoring 32 points against Indian Trail on 12-29-16 and 33 against Tremper on 12-30-16.

Quotable: "I'm pretty blessed to even be able to have a chance to break it. I guess you could say records are made to be broken. It's just a pleasure to be able to be put into the same category as an NBA All-Star, as (Van Exel) was." DeAndre Johns, on breaking Nick Van Exel's St. Joseph career scoring record during his senior year.

With a new decade upon us (and time on his hands due to the COVID-19 pandemic), Kenosha News Sports Editor Mike Johnson figured there'd never …

Central's Jaeden Zackery celebrates with teammates after the Falcons defeated Monona Grove in a WIAA Division-2 sectional final on March 10, 2018, to earn the first State Tournament berth in program history. Zackery was named the Kenosha News Boys Basketball Player of the Decade.

Adam Freitag is the only boys basketball player in Shoreland Lutheran history to be named first-team All-County in consecutive seasons, achieving the honor in 2011-12 and 2012-13.