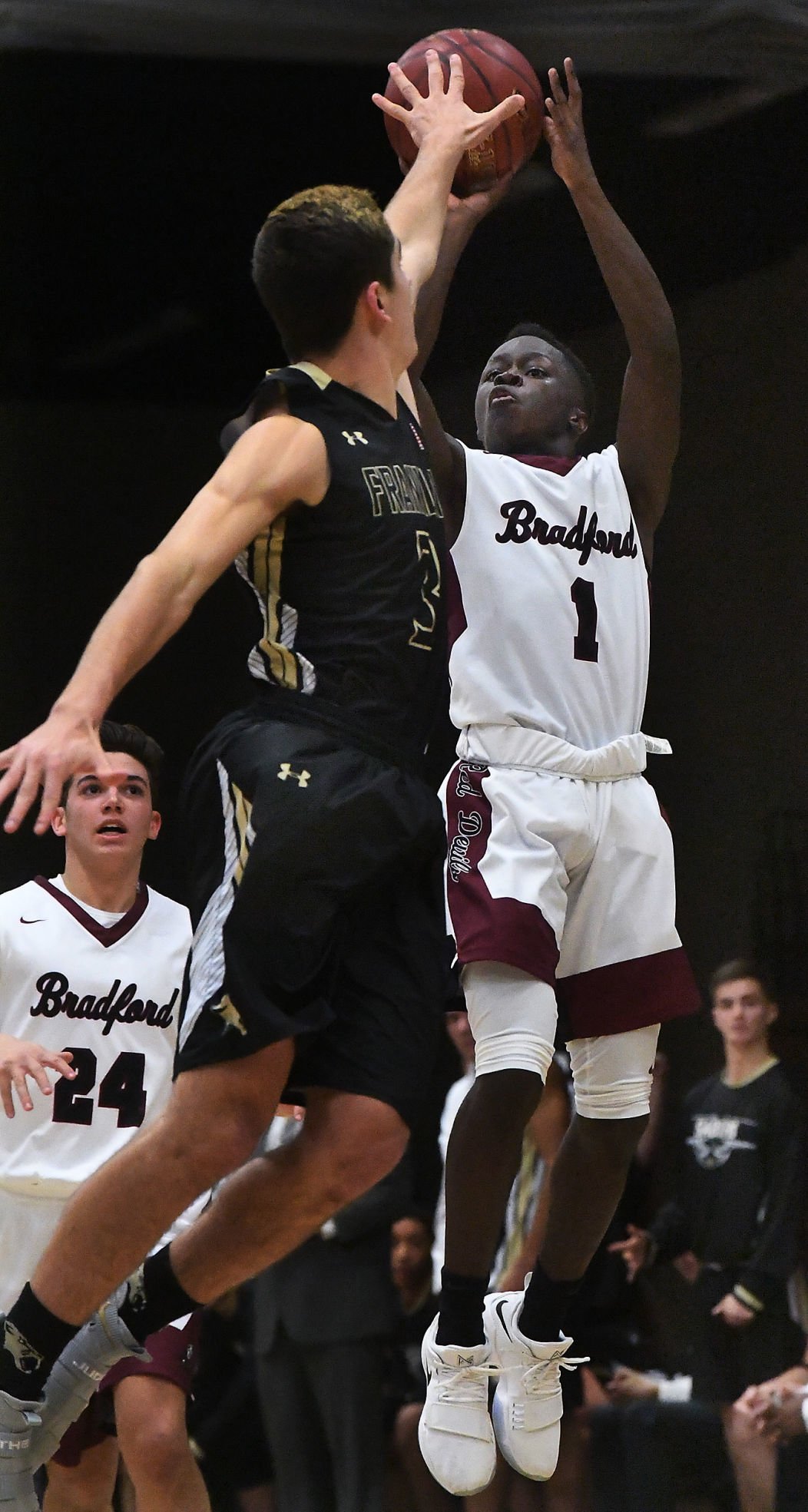 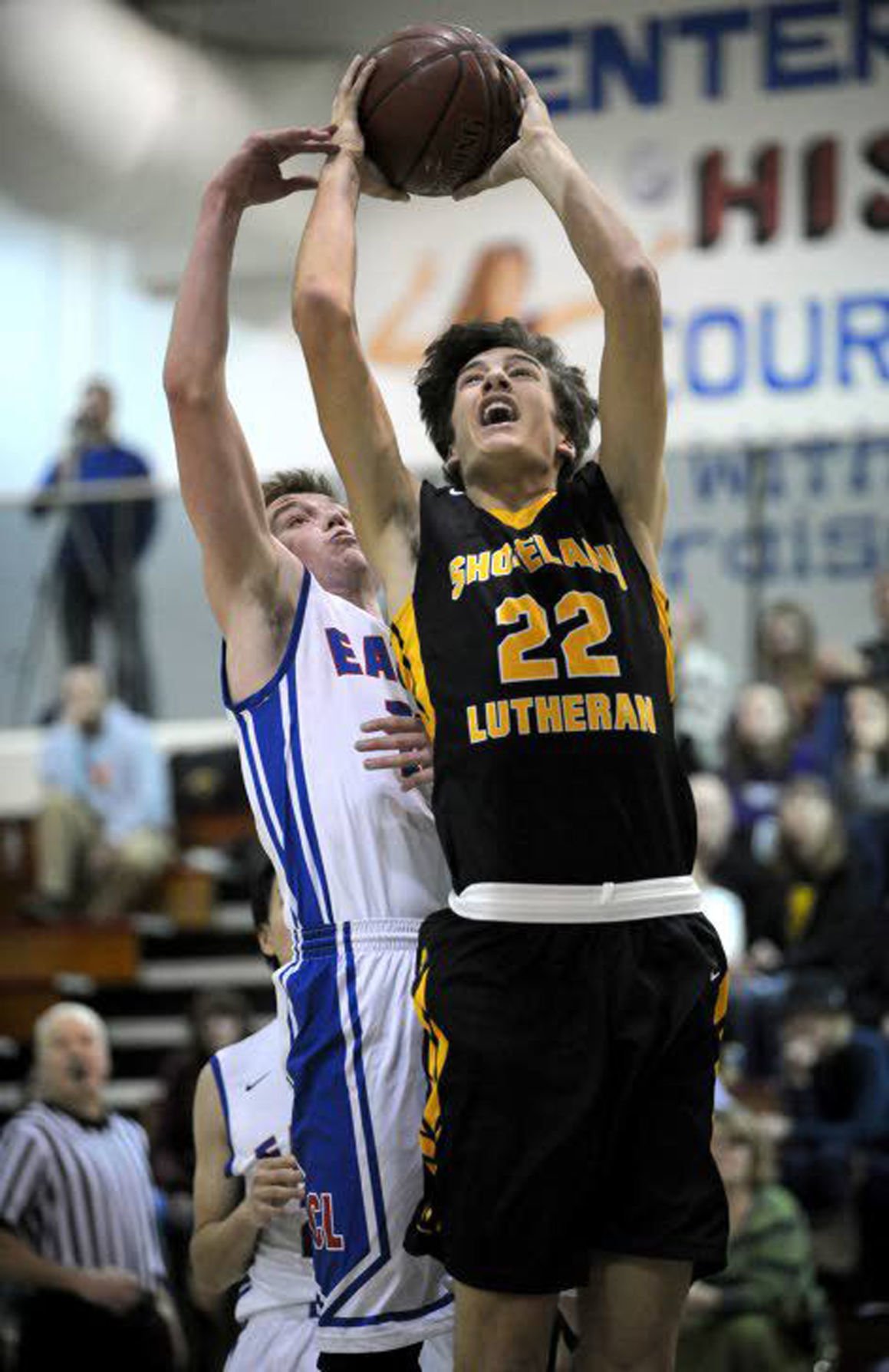 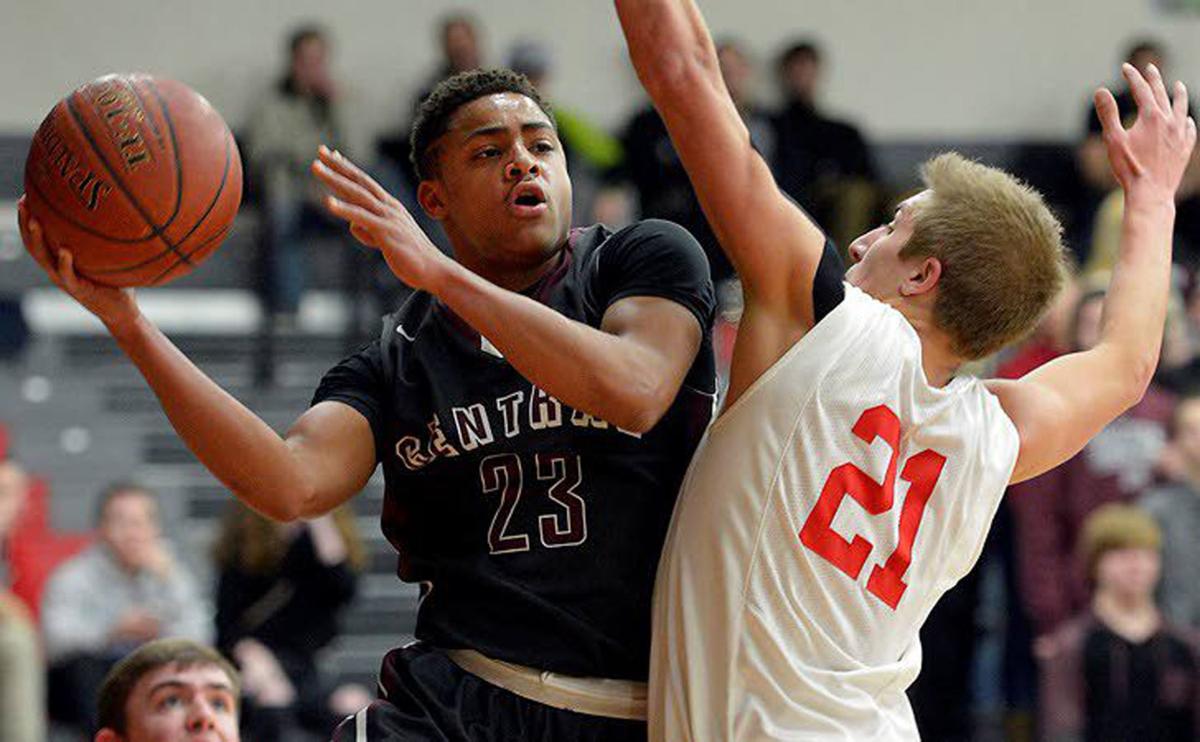 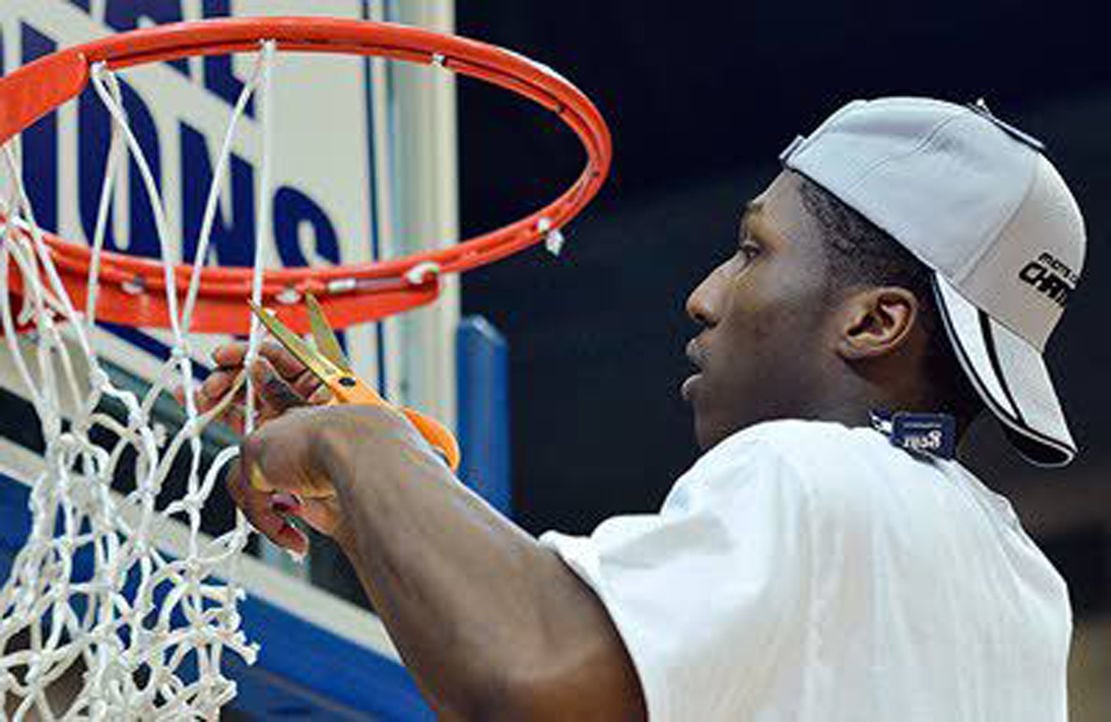 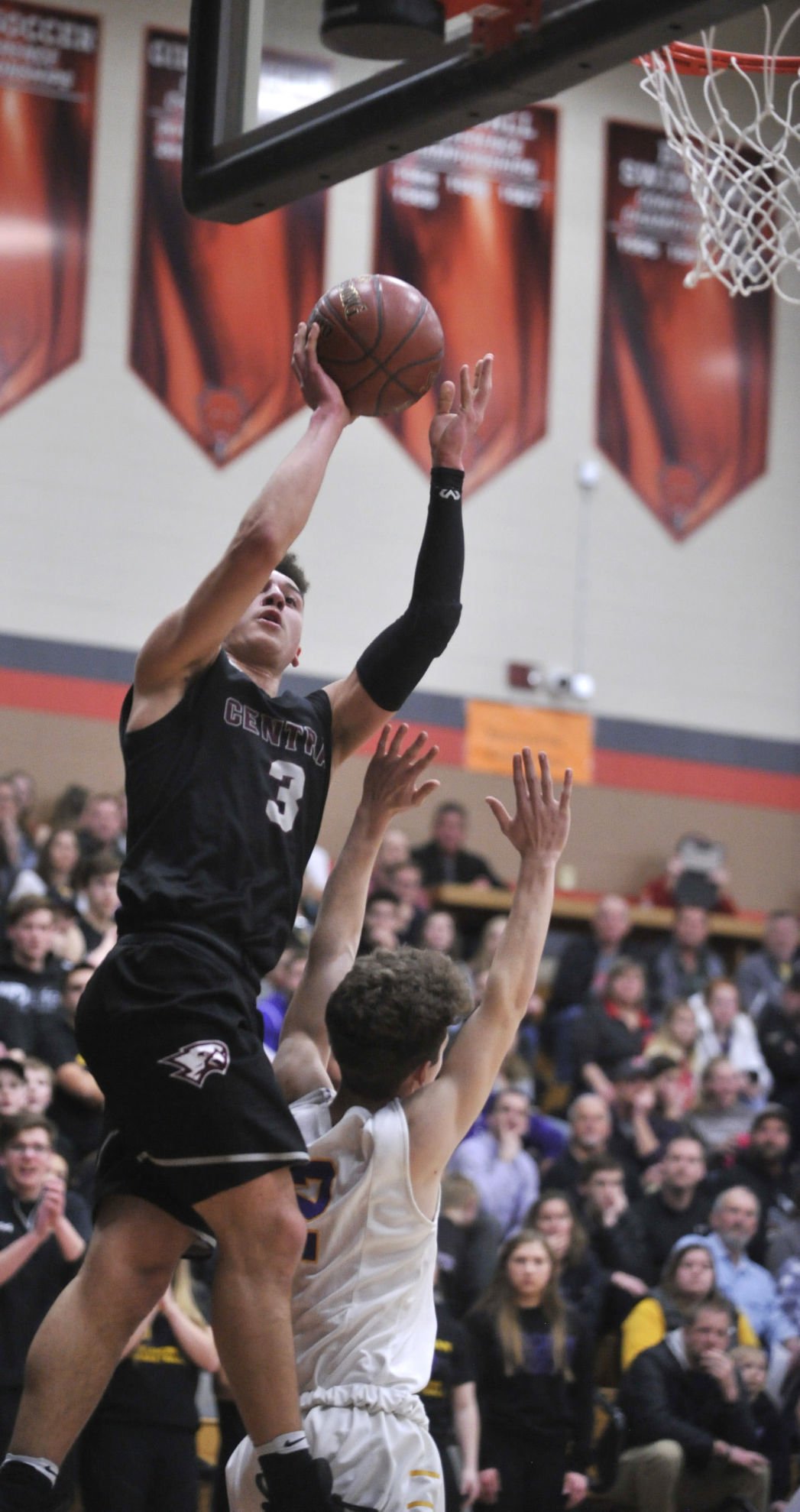 Central’s Jaeden Zackery shoots against Elkhorn during a WIAA Division-2 sectional semifinal in 2018. Zackery led the Falcons to their first State Tournament appearance in program history that season and was named the Kenosha News Boys Basketball Player of the Decade.

The 2010s were full of memorable moments for Kenosha County boys basketball.

In 2016, DeAndre Johns broke the great Nick Van Exel's St. Joseph career scoring record and Wilmot's Latrell Glass dazzled Delavan-Darien with a 49-point game. Wilmot's Bobby Brenner averaged 25.5 points per game and scored a staggering 1,248 points in just two seasons from 2014-16, and Bradford's De'Monte Nelson averaged 28.7 points per game in 2017-18 and with 1,641 points broke the school's career scoring mark of Jeff Cohen, which had stood since 1957.

The decade ended on a memorable note, too, for different reasons.

The 2019-20 Tremper squad streaked to the sectional finals and was a victory away from the program's first State Tournament berth since 2001, but the COVID-19 pandemic put a painful halt to the Trojans' remarkable run before they could finish it.

That's a lot of memories for a decade, but there's one that stands above the rest.

Really, could there be another choice?

In 2017-18, Central rode the sterling starting five of Jaeden Zackery, Adam Simmons, Dylan Anderson, Cooper Brinkman and Nic Frederick to the WIAA Division-2 State Tournament, the first state berth for the county since St. Joseph in 2003 — Tremper and St. Joseph both went in 2001 — and the only state appearance of the 2010s for a county team.

It's hard to imagine a county team playing more beautiful basketball than the Falcons did on March 10, 2018, when they dismantled Monona Grove, 76-55, in a sectional final at Oregon for the first State Tournament berth in program history.

The ride came to an end the next weekend in a hard-fought 75-63 state semifinal loss to Kaukauna, but that season came in the middle of a stupendous three-year run from 2016-19 in which Central went 65-13, won two Southern Lakes Conference titles and and reached sectionals three times.

At the center of that was Zackery, the talented guard who controlled games on both ends of the floor and was a key cog for the Falcons all three of those seasons.

For that, Zackery has been named the Kenosha News County Player of the Decade for boys basketball. The 10-player All-Decade team was selected by Kenosha News sports editor Mike Johnson.

Capsules on the second five players, in alphabetical order, are below. Capsules on the first five players appeared in Sunday's edition of the News. Each player's senior year is in parentheses. Available statistics are provided and were compiled via records from the News and WisSports.net.

Memorable: Prior to a Southeast Conference game against Franklin at the Bradford Fieldhouse on 12-15-17, Nelson was honored with a commemorative ball for surpassing the 1,000-point mark for his career. He then went out and scored 21 points in the first half and 28 overall and banked in a 3-pointer from just inside halfcourt at the buzzer in the Red Devils' 74-71 victory.

Quotable: “I was looking forward to playing JC. Earlier in the year, he told me he’s the only one that can guard me. He made that a tweet on Twitter, so I was looking forward to playing against him. We always have friendly 'convos.' Me and him, he’s like like my best friend. It was fun, kind of getting the crowd into it and watching almost the NBA All-Star Game, or whatever. You see the guys play one-on-one, or bucket for bucket. He’s a great player, and I’m a great offensive superstar. It’s always fun with me and him playing against each other.” De'Monte Nelson, after scoring a game-high 36 points and battling head-to-head with Racine Prairie star JC Butler in the 2018 MARK Your Moment Showcase Kenosha County vs. Racine County All-Star Game.

Lowdown: The talented Wendt almost certainly would've reached 1,000 career points but was limited to just 11 games during his senior season due to a broken thumb. Still, he scored 809 points and averaged 15.3 points per game for his career. ... Was named both first-team All-County and All-Metro Classic Conference as a junior and — despite the injury — was named second-team All-Metro Classic and honorable mention All-County after averaging 12.3 points over 11 games as a senior. ... Had 19 games of 20 or more points for his career, three of 30 or more and one of 40 or more. ... Scored 33 against Racine Prairie on 12-19-14 and a career-high 41 against Reuther on 2-22-16. ... Played one season at NCAA Division II Bemidji State (Minn.), averaging 7.2 points over 24 games as a freshman in 2016-17.

Memorable: After initially being told his senior season was over after just three games, Wendt made it back and returned with a bang. He scored 28 points in his first game back against Saint Thomas More on 2-9-16 and 32 in his third game back against St. Joseph on 2-16-16, as the Pacers notched a 77-68 home win over their county rivals.

Quotable: “Obviously I was happy for him. I’ve had some kids get hurt via other sports and not be able to play, a few of my own kids included. It’s tough for a high school kid who looks forward to something like that. In Lucas’ case, basketball is his thing.” Shoreland coach Paul Strutz, on Wendt returning from injury late in his senior season.

Lowdown: Williams was a key figure during Central's turnaround over the decade, as the Falcons went 47-28 (.623 winning percentage) with two Southern Lakes Conference titles, three WIAA Division-2 regional final appearances and one WIAA Division-2 sectional final appearance over Williams' three varsity seasons. ... Scored 20 or more points 20 times in his career and 30 or more twice. ... Scored a career-high 34 against Wilmot on 12-15-15. ... Averaged 16.5 points in four postseason games during the Falcons' run to their first sectional final appearance in program history during his senior season, including 22 in a sectional semifinal victory over Wilmot on 3-9-17. ... Appeared in seven games as a freshman at NCAA Division III UW-Whitewater in 2017-18.

Memorable: Williams scored 22 points to lead Central to a 74-43 win over county rival Wilmot on 3-8-17 in a WIAA Division-2 sectional semifinal at Burlington, as the Falcons earned their first sectional final berth in program history.

Quotable: "Making history is just a great feeling. We all are so excited. It's a humbling achievement. We get to move on, and we're not done yet." Tre' Williams, after scoring 22 points as Central beat Wilmot on 3-9-17 to advance to the first WIAA Division-2 sectional final in program history.

Lowdown: Young was the consummate pass-first point guard and led the Red Devils to back-to-back WIAA Division-1 sectional final appearances in 2010 and 2011, including a school-record 20 wins in 2010-11. ... During his junior of 2009-10, Bradford won its first conference title since 1978-79, notched its first season sweep of Tremper since 1990-91 and reached its first sectional final since 1989. ... Could score when he needed to, totaling 934 points over three varsity seasons, including 16 games of at least 20 points between his junior and senior years. ... Matched his career high of 26 in back-to-back games during his junior year, against Racine Case on 2-16-10 and against Franklin on 2-19-10. ... His career numbers were remarkably balanced, as he averaged 12.8 points, 4.5 rebounds, 3.2 assists and 2.0 steals. ... Went on to a stellar career at UW-Whitewater, earning first-team All-Wisconsin Intercollegiate Athletic Association honors following his junior and senior years, as well as first-team All-American honors and the Central Region Player of the Year award by D3hoops.com following his senior year. He helped the Warhawks win NCAA Division III national titles in 2012 and 2014.

Memorable: Technically, this moment didn't occur in high school, but how can you leave out a national championship-winning shot? On 3-22-14 in the D-III national title game against Williams College in Salem, Va., Young sliced through defenders down three-quarters of the court and delivered a do-or-die layup, was fouled and made the free throw with 0.9 seconds left to give Whitewater a 75-73 win and the title.

Quotable: "I saw him his junior year in high school, and I loved him there. We recruited him all last year. We just feel very fortunate to get him. He's a great kid. He works hard, he wants to get better, he's a great athlete." UW-Whitewater men's basketball coach Pat Miller, on Young during his freshman season with the Warhawks, in which they won the NCAA Division III national title.

Player of the Decade

Lowdown: The Falcons reached unprecedented heights during Zackery's three-year varsity tenure, compiling a 65-13 overall record (.833 winning percentage) and a 37-5 record in the Southern Lakes Conference (.881 winning percentage). They reached the WIAA Division-2 sectionals all three seasons after never reaching them before and won two SLC titles. Zackery led Central to its first State Tournament appearance during his junior year of 2017-18, the only state appearance for a county team during the decade. ... Zackery's 1,250 career points rank second in school history, just 15 behind 1989 graduate Tim Cates. ... Reached his career high of 34 points twice, on 1-13-18 against Bradford and on 2-8-19 against Waukesha West. ... Between his junior and senior seasons had 25 games of 20 points or more. ... Didn't go to a college program after leaving Central, instead opting to play a season at Scotland Campus Prep School in Pennsylvania. He's drawing interest from NCAA Division I programs.

Memorable: Zackery's defining performance came in the Falcons' 76-55 dismantling of Monona Grove in a sectional final on 3-10-18, as he notched 20 points, three rebounds, three assists and a whopping eight steals to lead Central to state. He then led all scorers with 21 points and added 11 rebounds, two assists and four steals in Central's 75-63 loss to Kaukauna in the state semifinals.

Quotable: “He was upset from the Elkhorn (sectional semifinal) game when he didn’t score (a first-half field goal). I looked at him in the locker room. He didn’t look (back). Usually he says something, or looks at me or winks. He didn’t give me a look. I was like, ‘All right, he’s ready.’” Central assistant coach Marcus Zackery, Jaeden's dad, on Jaeden's performance against Monona Grove in the 2018 sectional finals.

With a new decade upon us (and time on his hands due to the COVID-19 pandemic), Kenosha News Sports Editor Mike Johnson figured there'd never …

Central’s Jaeden Zackery shoots against Elkhorn during a WIAA Division-2 sectional semifinal in 2018. Zackery led the Falcons to their first State Tournament appearance in program history that season and was named the Kenosha News Boys Basketball Player of the Decade.