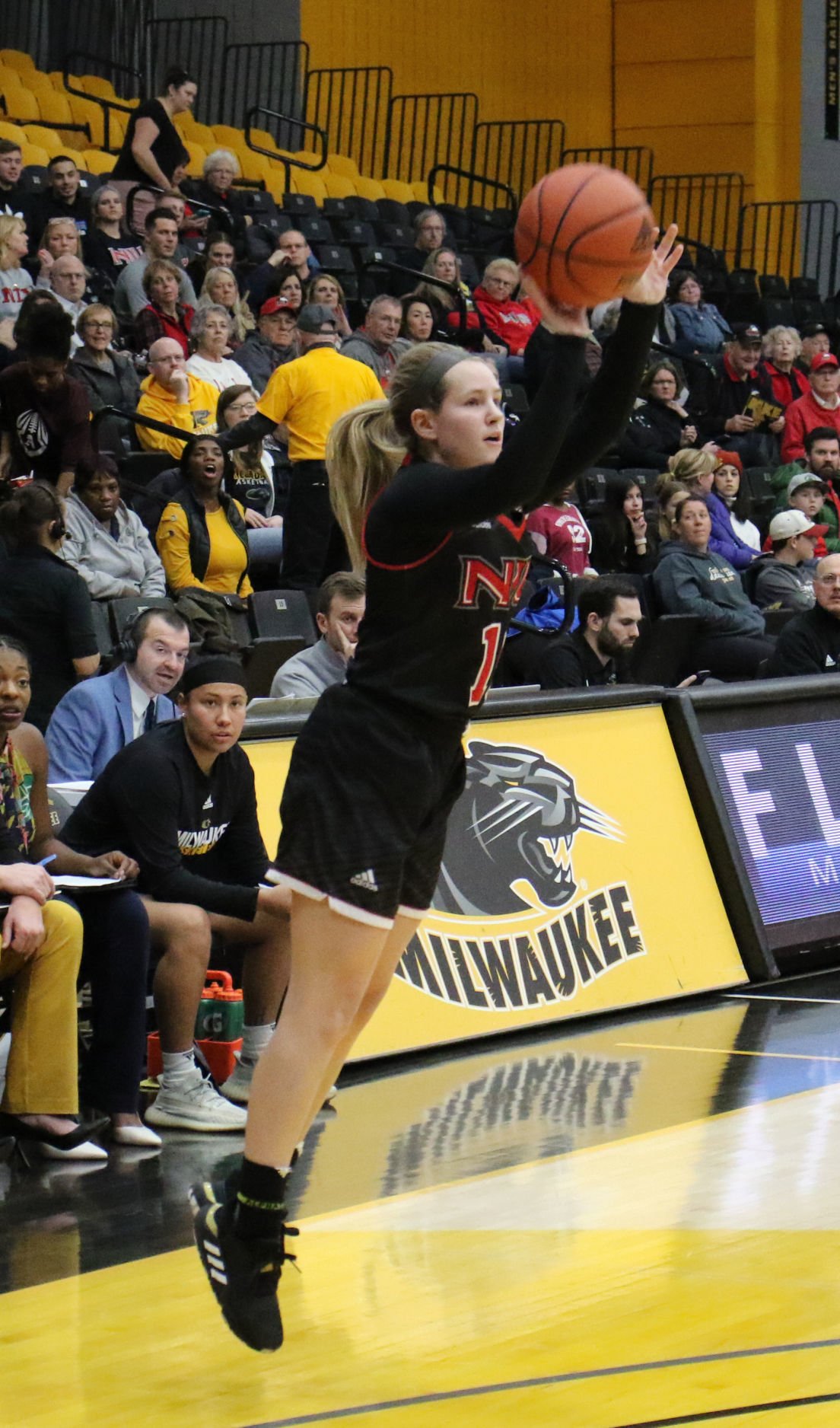 Former Shoreland Lutheran standout Chelby Koker knocks down one of her two 3-pointers Thursday night at UW-Milwaukee. Koker, now a freshman at NCAA Division I Northern Illinois, had six points for the Huskies, both on 3-pointers. Koker is Kenosha County’s all-time leading high school girls scorer. 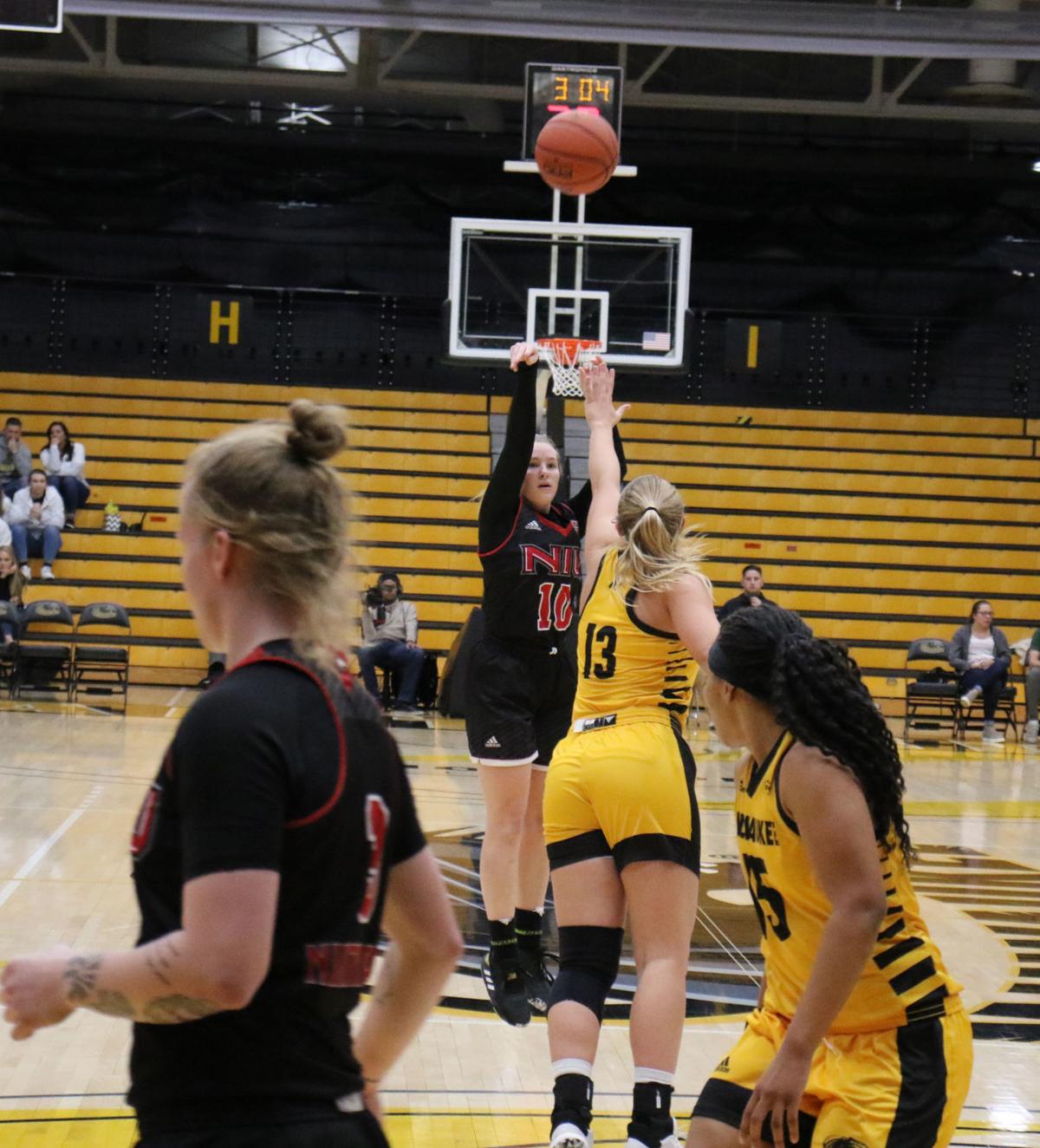 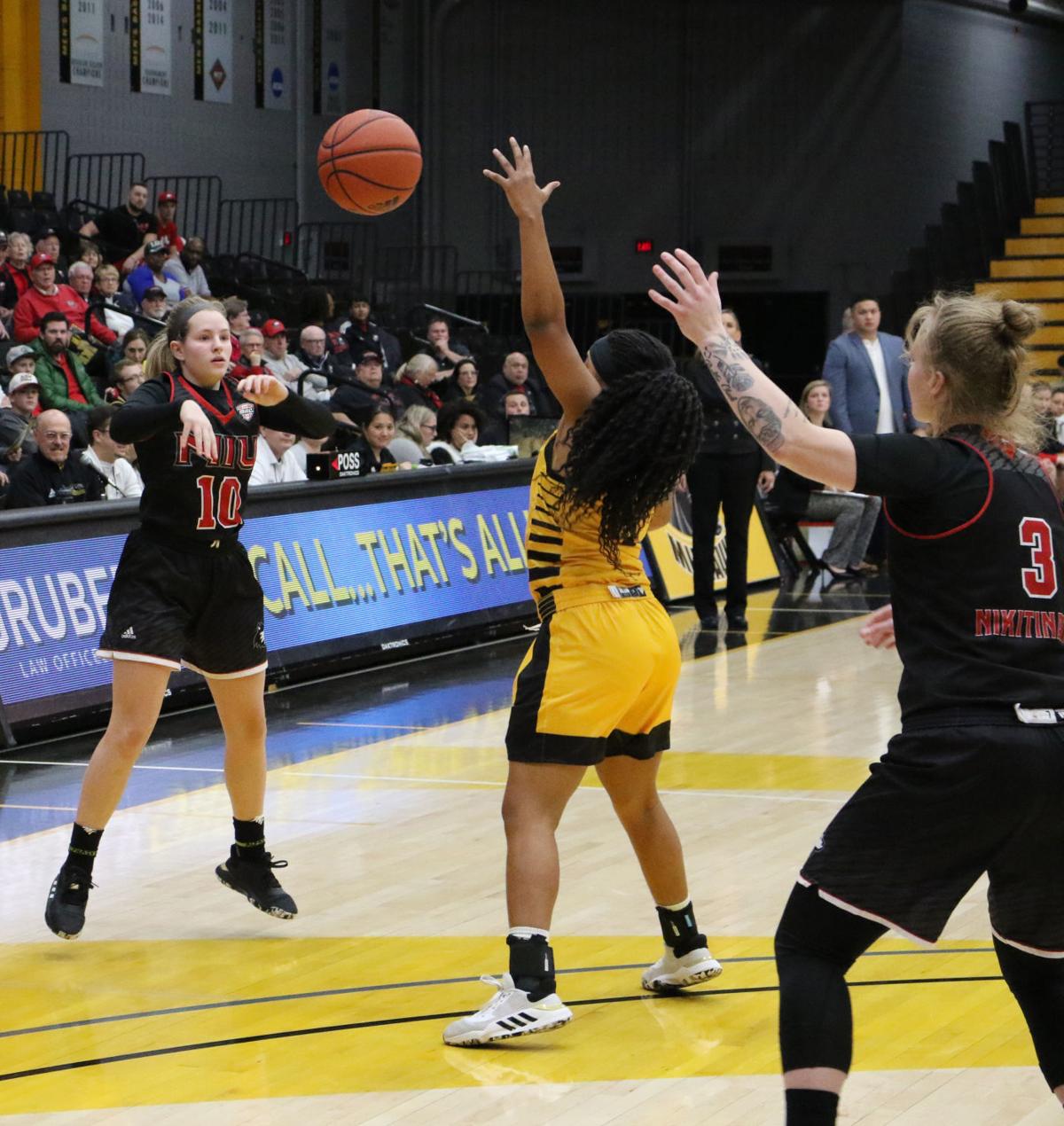 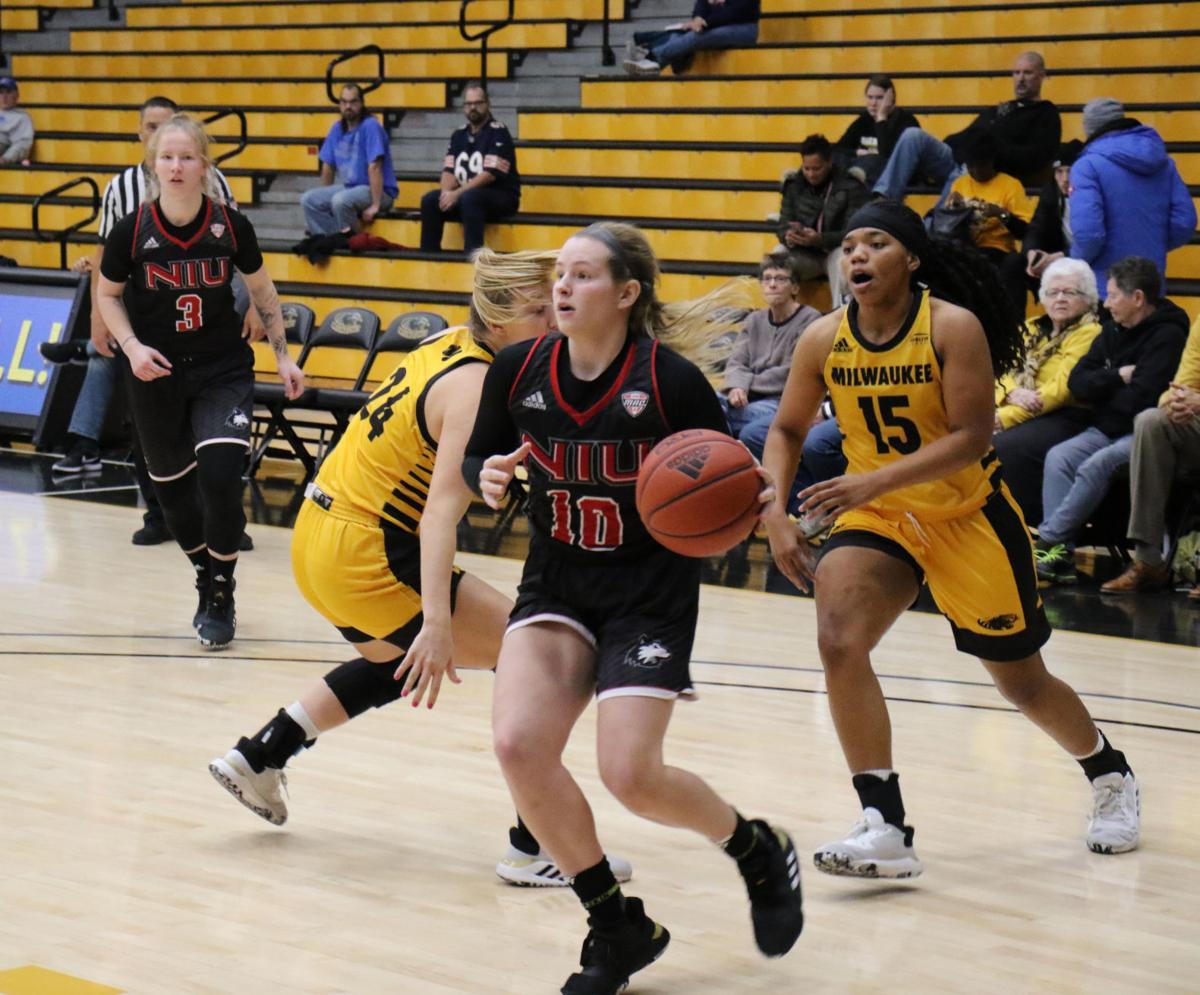 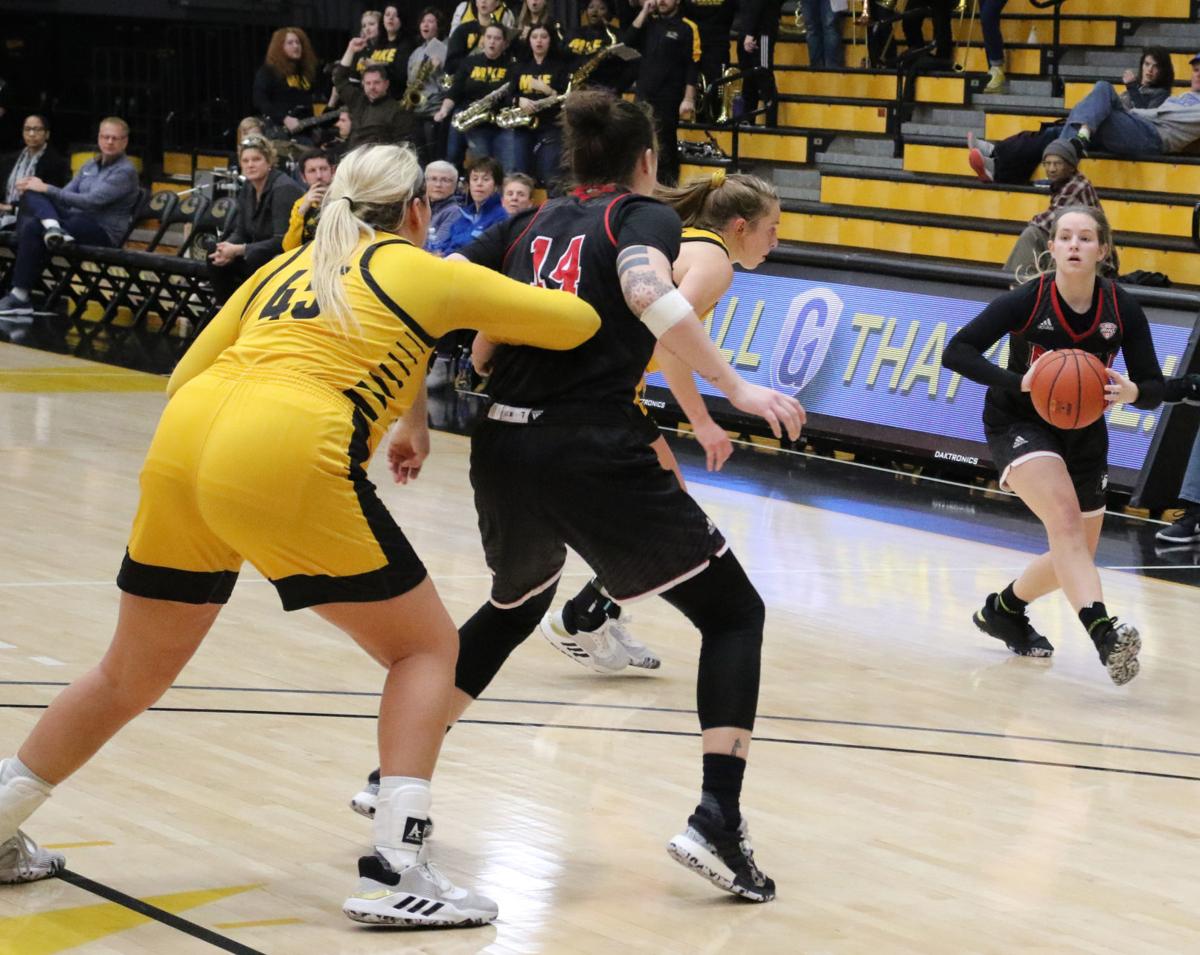 Northern Illinois freshman Chelby Koker, right, looks to make a pass to a teammate Thursday night at UW-Milwaukee. The former Shoreland Lutheran standout finished the night with six points, both on 3-pointers. 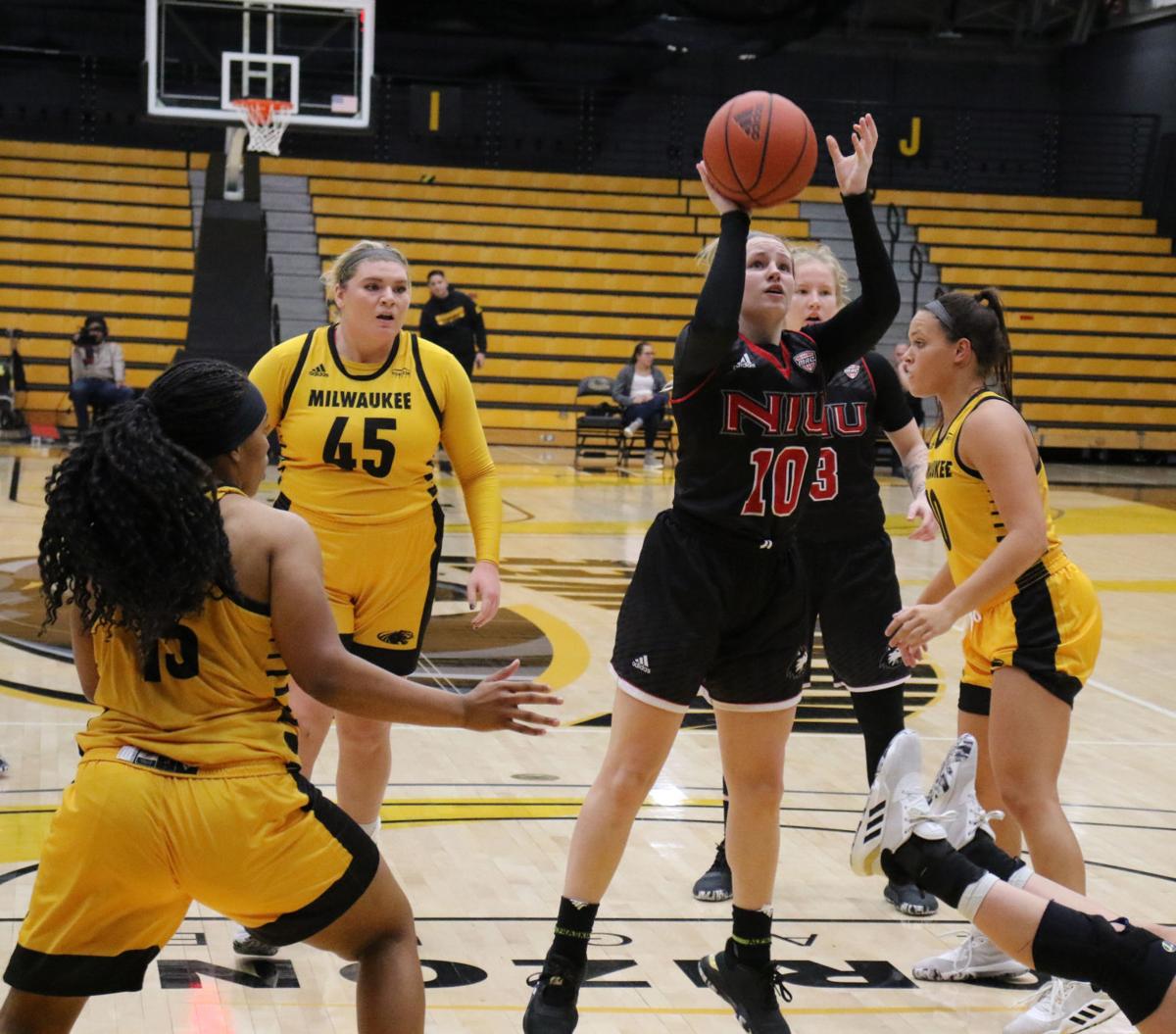 Former Shoreland Lutheran standout Chelby Koker puts up a shot in traffic Thursday night at UW-Milwaukee. Koker is a freshman at NCAA Division I Northern Illinois.

It wasn’t quite home Thursday night, but judging by the enthusiastic crew of friends and family in attendance at UW-Milwauke’s Klotsche Center, it was pretty darn close.

Koker, who ended her high school career as Kenosha County’s all-time leading scorer — boys or girls — made her only return to the state with her new team, NCAA Division I Northern Illinois, in a non-conference matchup with the Panthers.

And while Northern Illinois fell, 78-65, Koker enjoyed her brief trip back to familiar territory.

“It definitely makes me feel good that my family and friends still support me and came out to my game,” Koker said. “It was like playing at home. It felt really comfortable.”

The transition from high school to NCAA Division I has been smooth, Koker said.

“My teammates made it really easy to step into the college life, especially in the summer, getting adjusted,” she said. “They’ve done so well taking all the freshmen under their wing, making us feel comfortable.

“My teammates and coaches have done a good job believing in me, and that’s helped me have confidence in my shot.”

And comfortable she has been.

Through the first eight games, Koker has compiled 69 points, good for an 8.9 per-game average, to go with 14 3-pointers, a 9-for-9 effort from the free-throw line, 29 rebounds, 13 assists and seven steals.

On Thursday, Koker, who has played in all eight of the Huskies’ games, saw 20 minutes of action. She knocked down two 3-pointers and finished with six points, three rebounds and two assists.

Koker’s first made trey came with 3 minutes, 33 seconds left in the first half when she came off a screen at the top of the key. Her second came with time winding down at the end of the third quarter that, at the time, gave the Huskies a two-point lead heading into the last 10 minutes.

Northern Illinois coach Lisa Carlsen has been more than pleased with what Koker has brought to the table.

“She fits in great,” Carlsen said. “She’s a great kid to coach. She’s going to give you everything she has all the time. She wants to score the basketball. She’s very confident for a freshman. We love that about her.

“She continues to grow in all those other areas that area a little bit more difficult sometimes at the collegiate level. She’s an extremely hard worker, so she’s going to continue to grow in all areas on the court.”

Carlsen said she doesn’t hesitate to have Koker on the floor at any point in the game — regardless of her youth and inexperience.

She’s already proven she belongs whenever the situation warrants it. Koker started the fourth quarter Thursday and played the first five minutes before she was subbed out.

“Chelby is one of those kids who just has a great basketball IQ,” Carlsen said. “She understands time and situation. In those situations, I don’t think of her as a freshman. I think a lot of times, she’s our best option out there as far as the five that we have on the floor in tight situations.

“Pretty much, all but one game that we’ve played has been a tight situation, so she’s already been in some of those situations. She understands what we expect and what we’re trying to accomplish.”

Carlsen added she obviously knew the caliber of player that Koker was prior to her arrival on campus, but until the games began she wasn’t certain if those big-game situations would be something she could handle so soon.

Any of those fears were quickly put to rest.

“I knew that we were getting a player like that,” Carlsen said. “I didn’t know if, on the big stage, the lights would be a little too bright. Clearly, the lights aren’t too bright. She plays basketball on the court just like she has the last several years. I don’t think she thinks twice about that, which is great.”

Prior to arriving in Milwaukee to face the Panthers, Koker and the Huskies spent last weekend at the South Point Shootout in Las Vegas.

And while her collegiate career is still just in its infancy, Koker certainly enjoyed her visit to the desert.

After she had a then-career-high 14 points in a victory over Tennessee Tech, Koker followed that effort with a season-high five 3-pointers en route to 17 points against South Dakota. She was named the Sixth Woman of the Tournament.

“My shot happened to be going in,” Koker said. “My coaches told me to keep shooting it, so that was what I did.”

While her on-the-court efforts have been fairly seamless, Koker said she’s still working through adjusting to everything that goes into being a Division I athlete.

And that’s not just basketball-only activities, either.

In short, there’s plenty to fill every day.

“The amount of workouts, school and everything that we have (to do) is at the next level,” Koker said. “That was a big change.”

Another change has been the time on the road, and the Huskies already have logged plenty of miles through eight games.

Northern Illinois began its season with a home game Nov. 5, but prior to Thursday had played road games at North Dakota State, Colorado State, Illinois State, Purdue and two in Las Vegas.

But for Koker, life on the road actually isn’t all that bad — and comes with a built-in positive.

“I like traveling,” she said. “I didn’t have to go to class today, so that was a plus.”

When it comes to class and school work, however, Koker and her teammates certainly have to keep their focus when they’re not involved in basketball-related activities.

It’s all just another piece to the Division I puzzle for Koker, who plans to major in pre-physical therapy.

“We have to turn everything in before we leave and talk to our professors,” she said. “It’s been good.”

The physical part of the game takes some getting used to for the 5-foot-6 Koker, who found herself matched up with bigger opponents on defensive switches Thursday night.

And that included a hard, illegal screen she absorbed midway through the fourth quarter.

But it’s all part of it, she said.

“Obviously, I wasn’t blessed with being super tall,” she said. “One of the big things for me and the other guards is getting in front. That’s a lot different, because in high school, everyone isn’t six-foot.”

Koker shrugged off the jolt she took on the screen from Milwaukee’s 6-3 Emma Wittmershaus.

As for moving forward from here?

Koker, ever the team player, knows her inaugural collegiate season will continue to be a learning process.

“I’m just willing to do anything,” she said. “When I get subbed in, I’m ready to go. I think that’s part of my role, when I get in there, to play my role, do what I’m supposed to do, shoot the ball or whatnot.”

Carlsen sees Koker’s role growing and growing from here — and she also now has the benefit of learning from the Huskies’ senior starting point guard, Myia Starks.

Starks has done a great job helping Koker along as she prepares to pass the torch after this season, Carlsen said.

“Our expectation for Chelby is to be that point guard the next three years. She’s put herself in that position where I don’t want her to just be on the floor at the point because Miya is going to play a lot of minutes, and that’s a credit to her work since she stepped on campus.

“Chelby is a point guard, and that’s where she’s most comfortable. I think she’s going to have a great opportunity during her career to be an integral part of what we’re going to do.”

Former Shoreland Lutheran standout Chelby Koker knocks down one of her two 3-pointers Thursday night at UW-Milwaukee. Koker, now a freshman at NCAA Division I Northern Illinois, had six points for the Huskies, both on 3-pointers. Koker is Kenosha County’s all-time leading high school girls scorer.

Northern Illinois freshman Chelby Koker, right, looks to make a pass to a teammate Thursday night at UW-Milwaukee. The former Shoreland Lutheran standout finished the night with six points, both on 3-pointers.

Former Shoreland Lutheran standout Chelby Koker puts up a shot in traffic Thursday night at UW-Milwaukee. Koker is a freshman at NCAA Division I Northern Illinois.