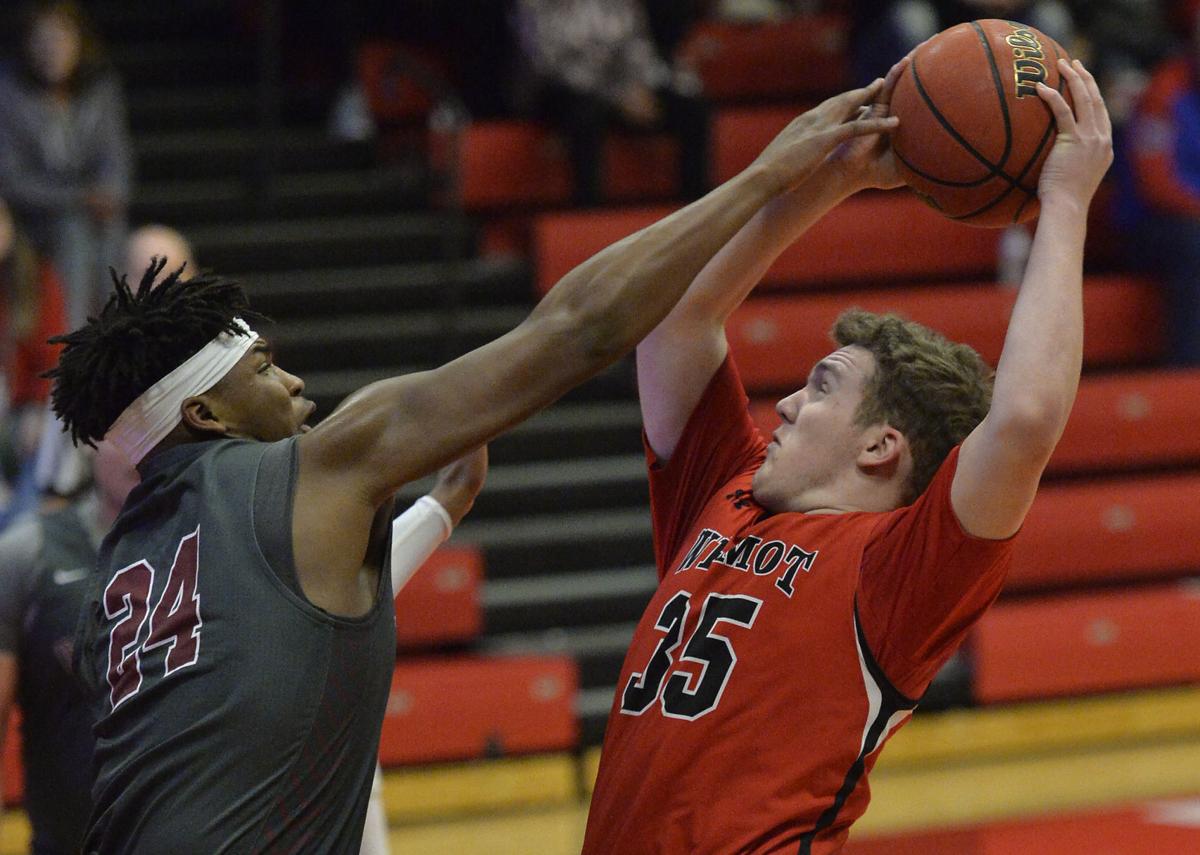 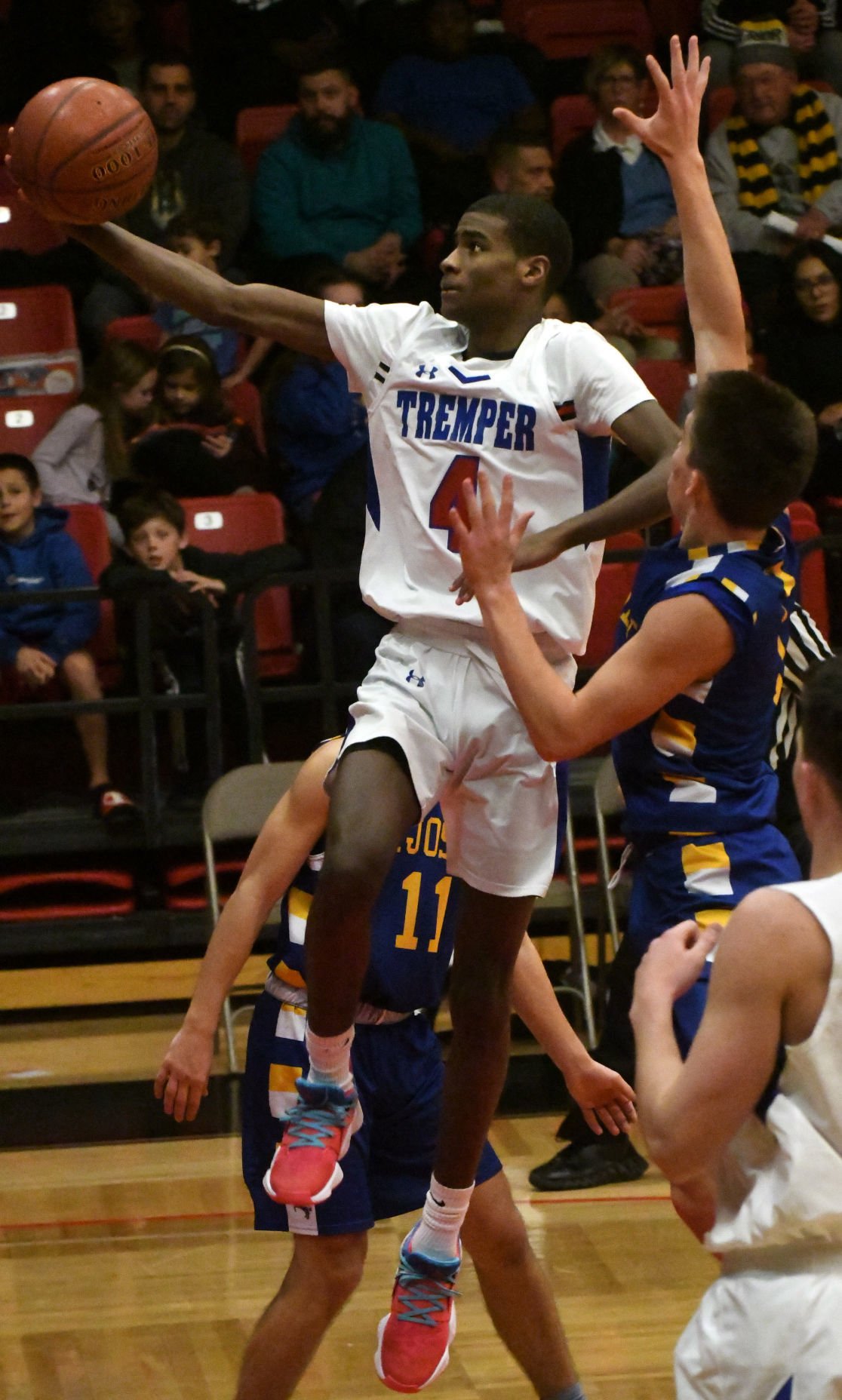 Tremper’s Jyon Young goes up for a shot against St. Joseph this season. Young led the Southeast Conference with 21.4 points per game and was named first-team All-SEC and Wisconsin Basketball Coaches Association All-State honorable mention. 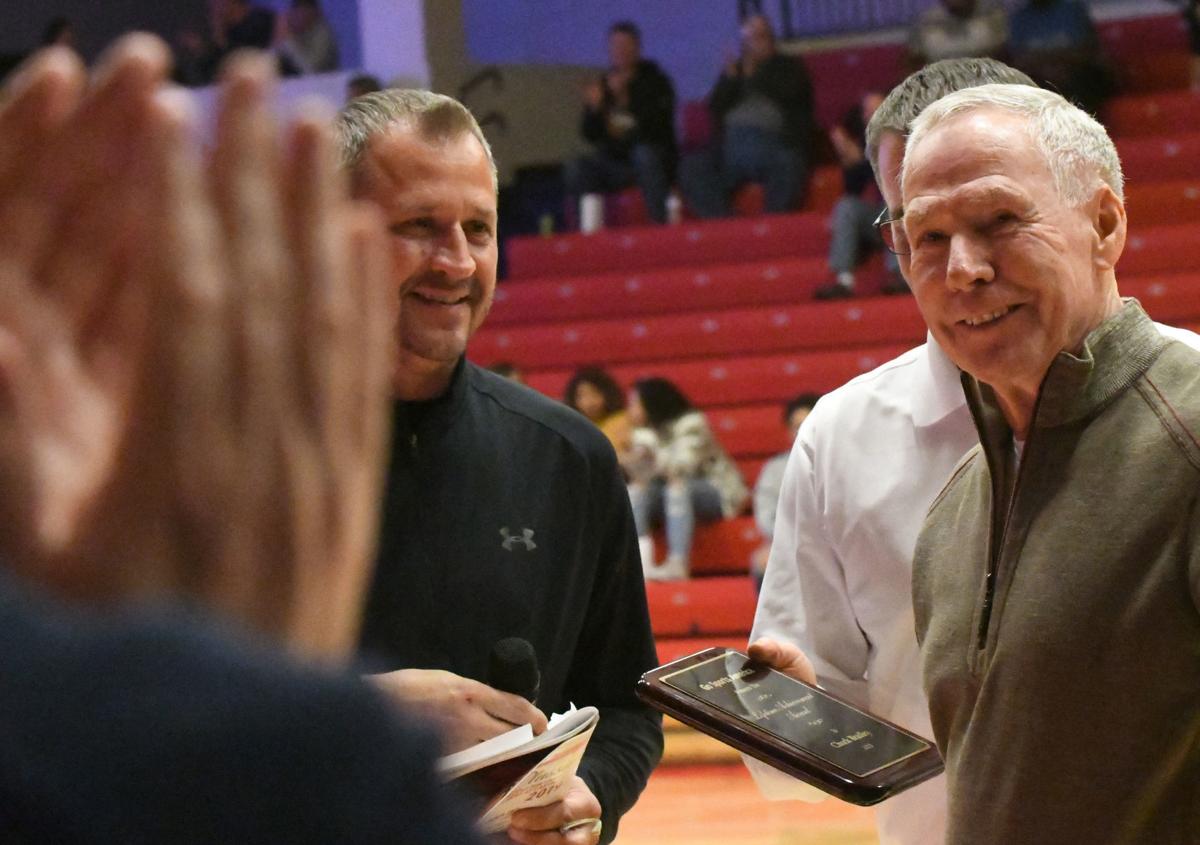 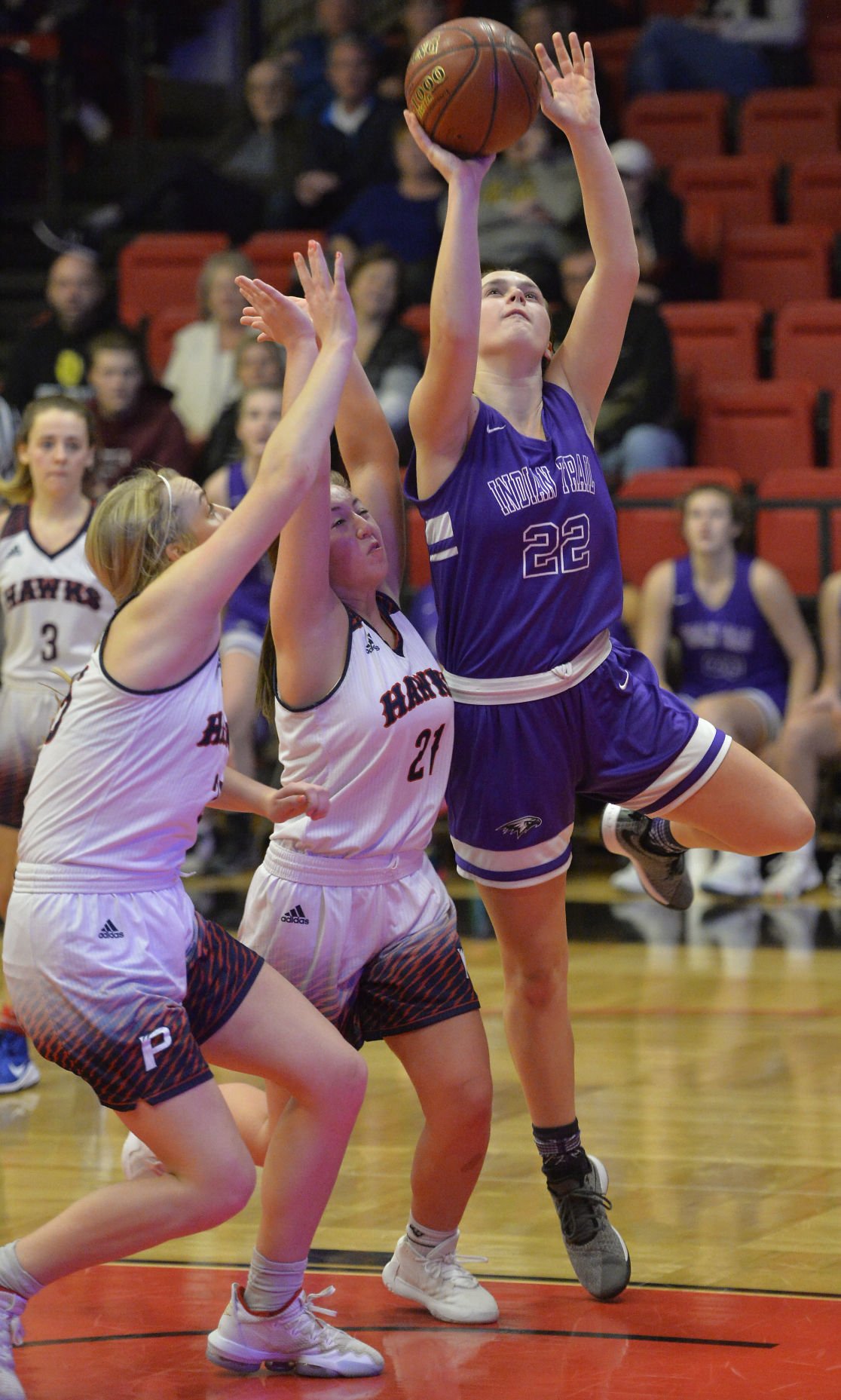 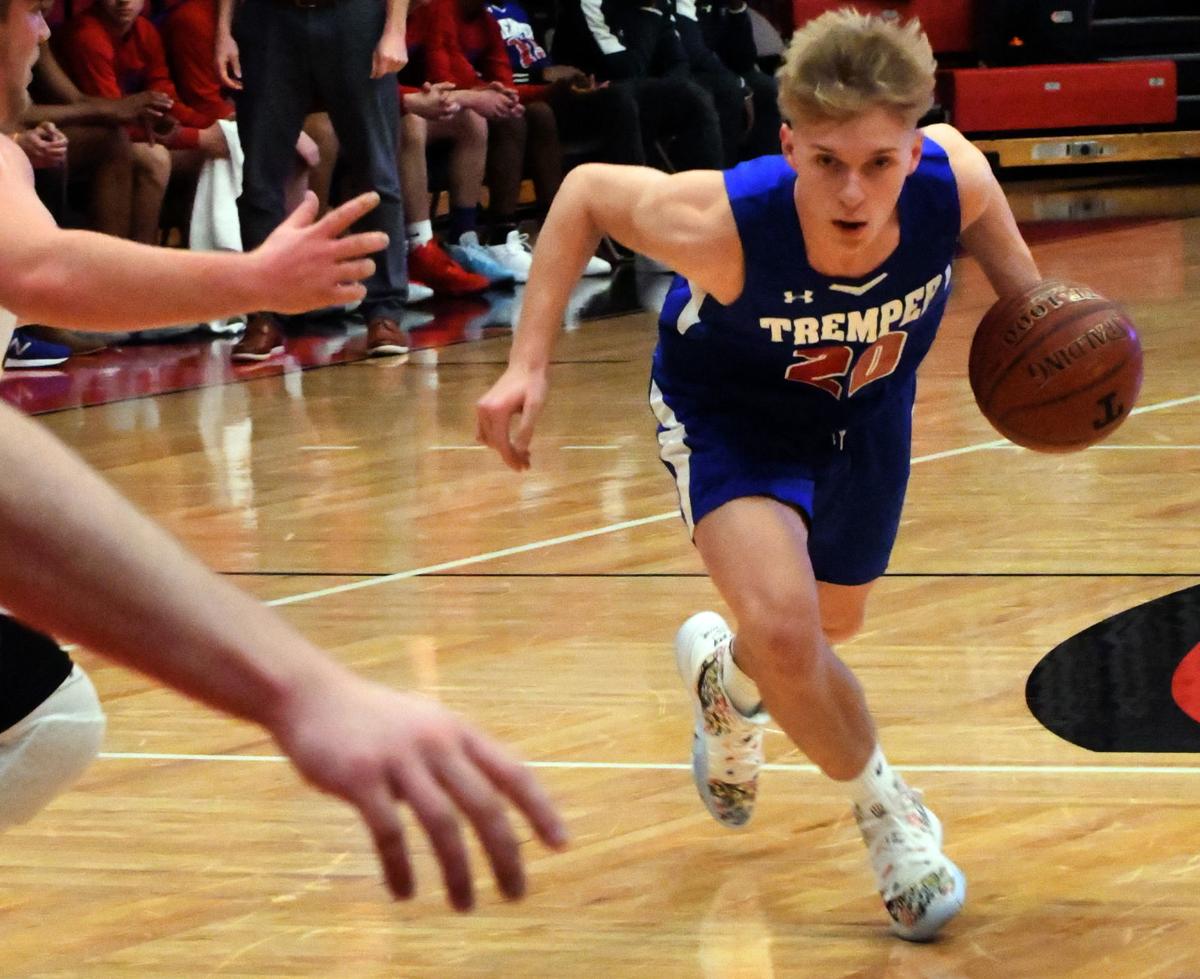 Tremper's Blake Hoffman drives during the Trojans' 97-63 win over Racine Lutheran on Thursday night in the Doctors of Physical Therapy Holiday Classic at Carthage's Tarble Arena.

So to see Carthage’s Tarble Arena ringed with fans this weekend had to be a wonderful sight for Lynn and everyone else who helped put the three-day, 15-game event — which was played Thursday, Friday and Saturday — together.

On Friday night, with spectators occupying all four sides of Tarble Arena for the boys game between St. Joseph and Central, Lynn could take a moment to admire the hard work done by himself, tournament co-director Jon Palmen and plenty of others.

“This is driven by the community and the surrounding communities and just basketball as a whole, with people supporting basketball,” Lynn said. “You’ve got to love basketball this time of year.”

This was the eighth annual Doctors of Physical Therapy Holiday Classic, and local interest seems to keep getting stronger. For players, fans and coaches, it’s a great opportunity to showcase local talent and for teams and players that don’t ordinarily play each other to match up.

“I actually hear that year-round, ‘Who’s playing who?’” Lynn said. “I just love to create excitement for the kids, myself and Jon Palmen, and just the vibe it creates. What better time than after Christmas to celebrate hoops? That’s what I look forward to.”

The participants would agree.

“This tournament’s awesome,” Indian Trail coach Al Anderson said. It’s incredible for the community, like I’ve said in the past. Everyone comes back. Alumni come back from all the different schools to watch their teams play. I saw (Jaeden) Zackery from Central up there watching. We had guys from our school that came back to watch.

“Just a great thing for the community, and I love playing in it.”

Of course, Lynn is certainly happy to spend some time relaxing after it’s over.

“Well, I wanted to throw my phone out the car about 10 times today,” he said with a laugh Friday. “It takes a lot to handle this, and it’s driven by a few people, and it’s created by the schools’ administrations basically agreeing to do something like this.”

Here’s a look back at the weekend:

More than anything, this event is designed to create matchups that would never happen in conference play or during the postseason.

The Falcons are classified as Division-2 and the Lancers as Division-4, but the teams have one thing in common: They’re both heavily reliant on sophomores, and those sophomores have a lot of talent.

St. Joseph led by three points at halftime, but Central surged early in the second half and won, 67-44.

Second-year St. Joseph coach Brandon Morris, a former standout for the Lancers trying to build the program at his alma mater, said playing an opponent like Central can only help.

The Lancers are 1-6 but have played a tough schedule, something they can’t avoid anyway in the Metro Classic Conference.

“That’s specifically why I wanted this type of schedule — not just in the holiday tournament, but all our non-conference games are against bigger schools,” Morris said. “We’re at the Division-4 level, but the teams in our conference are some of the best Division-2 and Division-3 teams in the state. This just gets them ready for what we’re going to be playing against the whole season long.

This is Hyllberg’s fifth season leading the Falcons and the first time he’s played St. Joseph. Hyllberg has led his program to three Southern Lakes Conference titles, three WIAA Division-2 sectional berths and one State Tournament appearance, so he knows what Morris is trying to build.

“Brandon has done a great job at St. Joe’s,” Hyllberg said. “I have a lot of respect for him and his program. It’s fun to play teams we wouldn’t normally see.

“The kids love it. They do a great job of putting this on for us.”

The Falcons are extremely young, but their talent is tantalizing.

It’s way too early to make predictions, but it’s not hard to imagine what looked to be a rebuilding season turning into a contending one.

Central has no starters left from the team that went to state two seasons ago and only sophomore forward Jack Rose was a member of last year’s rotation.

But with the 6-foot-4 Rose and 6-7 Bradley Bell in the frontcourt and Kenny Garth and Devin Griffin in the backcourt, the Falcons start a quartet of sophomores that could push the program right back to its recent lofty standards.

After losing its first two games this season to teams from Illinois, Central has won five straight, four of those by 15 points or more. The Falcons defeated Indian Trail, 66-49, on Saturday after Friday’s win over St. Joseph.

“We’re still learning every single day,” Hyllberg said following Friday’s game. “There’s going to be a lot of mistakes we have to correct, a learning curve for these guys, because they’re going to face guys bigger, stronger, faster.

“Make them play hard on defense, play under control, don’t turn the ball over and good things can happen.”

Saturday’s game between the Tremper and St. Joseph girls teams had a lot of connections.

First-year Tremper coach Lynell Collins coached the St. Joseph boys for three seasons and the St. Joseph girls for six after stepping down in 2018 and taking a year off.

On Saturday, Collins pitted his young Tremper squad against St. Joseph, and the Lancers emerged with a 68-56 victory.

“I was at St. Joseph for a long time, so I do have something in my heart for them,” Collins said. “But on the flip side, I’m coaching Tremper now, and we’re trying to do big things at Tremper.

“It was another game as far as that. I tried to make sure my girls understood that.”

Meanwhile, second-year St. Joseph coach Jason Coker has his squad off to a 6-2 start. Coker’s daughter, Haylei, was a senior at Tremper last year and played for the Trojans.

So Coker is familiar with many of Tremper’s players, as well as with Collins.

“There was definitely a lot mixed in there,” Coker said. “I’m happy for him. He has some girls who can play. A lot of the girls over there, I already know and some I coached. Same for him.

“I have girls on my team that he’s coached. That’s what makes the holiday tournament so special.”

In addition to the matchups, one thing players might enjoy about the event is playing at Tarble Arena.

College courts are 94 feet long, 10 feet longer than high school courts, so for three days players got to experience playing on a bigger court.

That experience can help anyone being recruited to play in college, like 6-7 West Allis Central senior forward Shilo Bowles, a college prospect who had 26 points and 13 rebounds in his team’s 79-65 win over Indian Trail on Friday.

“It’s real good,” Bowles said of playing at Tarble. “I’m a senior, so this is my last year. I’ve got to get the feel of playing on the longer length of court, so it’s a good feeling.”

Among the 10 boys teams participating, Tremper and Central were the only to finish 2-0 on the weekend.

Among the seven girls teams, Bradford and Janesville Parker went 2-0.

For a photo gallery of the 2019 Doctors of Physical Therapy Holiday Classic, go to kenoshanews.com/sports.

Spring Valley Country Club in Salem will be the site of the fourth annual U.S. Speedgolf Championships, scheduled for Oct. 10-11.

Tyrone White died in a crash in Florida on Sunday that left his wife and James' mother Lisa White in critical condition.

After the state events were ruled out at University of Wisconsin facilities in a decision last week, new sites were set for girls golf, girls tennis and girls swimming and diving this fall.

Waiting game over for Franz at Central

The Kenosha Kingfish have hired Steve Malliet to take over the day-to-day operations of the franchise as team president.

Tremper’s Jyon Young goes up for a shot against St. Joseph this season. Young led the Southeast Conference with 21.4 points per game and was named first-team All-SEC and Wisconsin Basketball Coaches Association All-State honorable mention.

Tremper's Blake Hoffman drives during the Trojans' 97-63 win over Racine Lutheran on Thursday night in the Doctors of Physical Therapy Holiday Classic at Carthage's Tarble Arena.