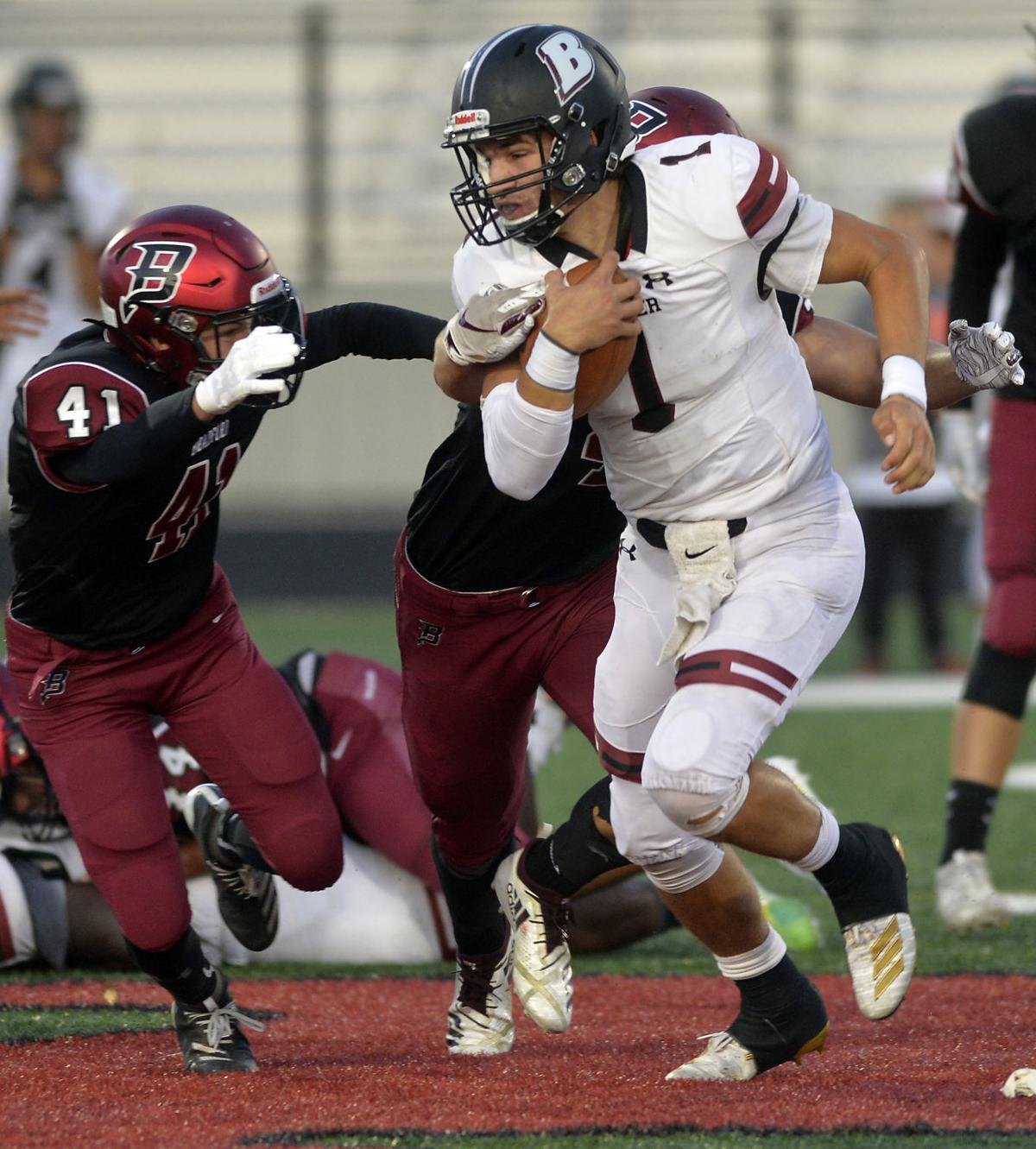 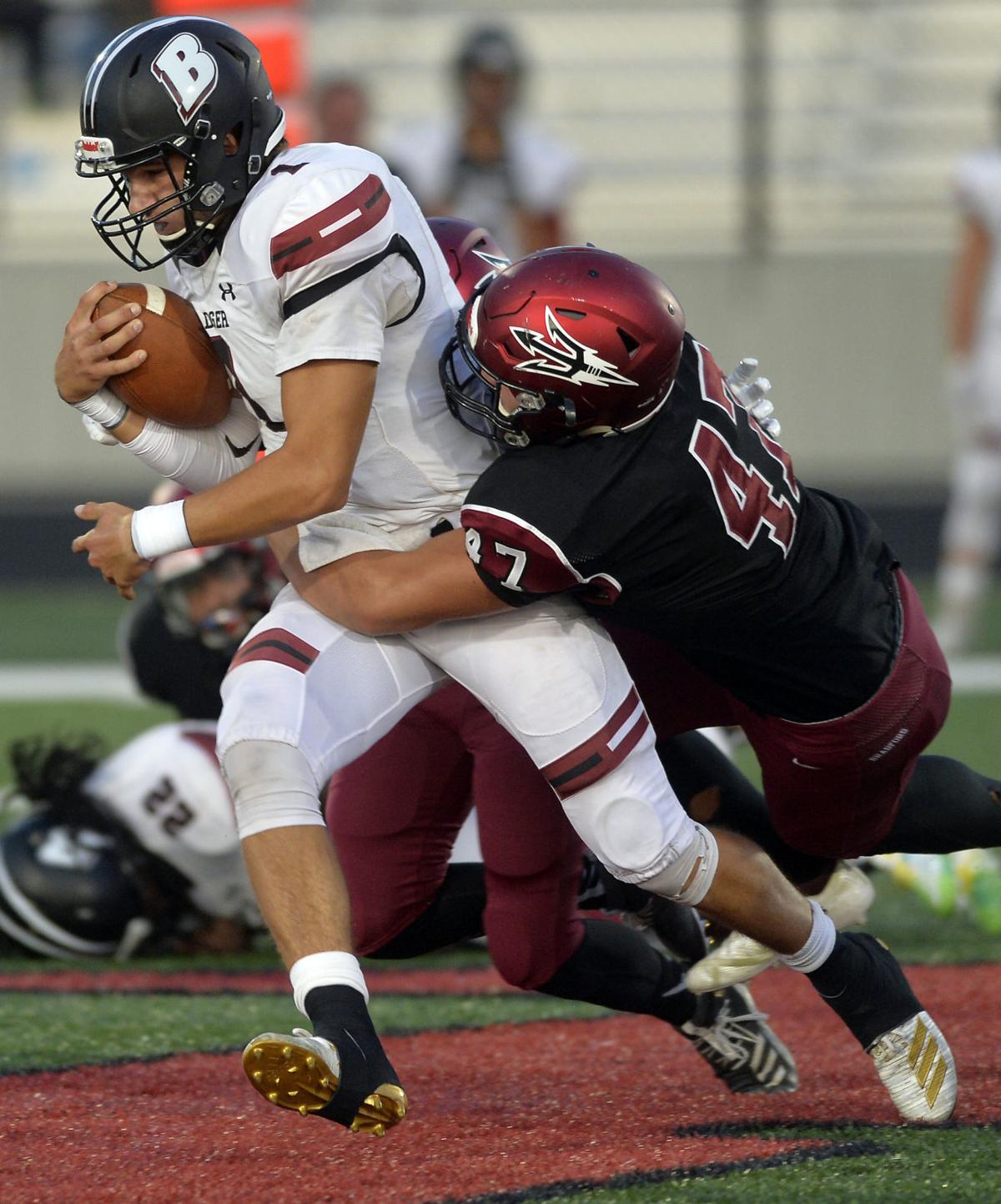 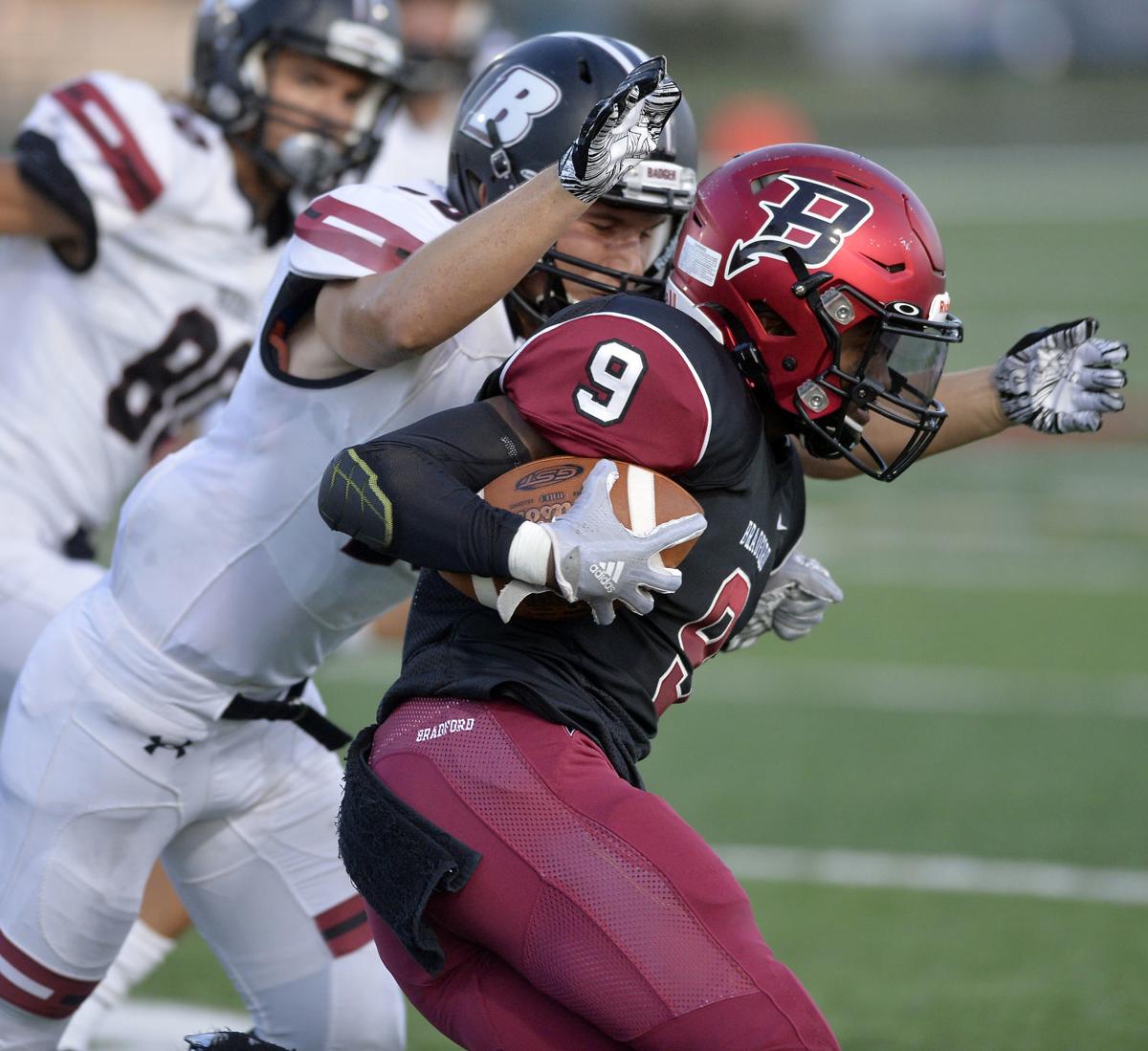 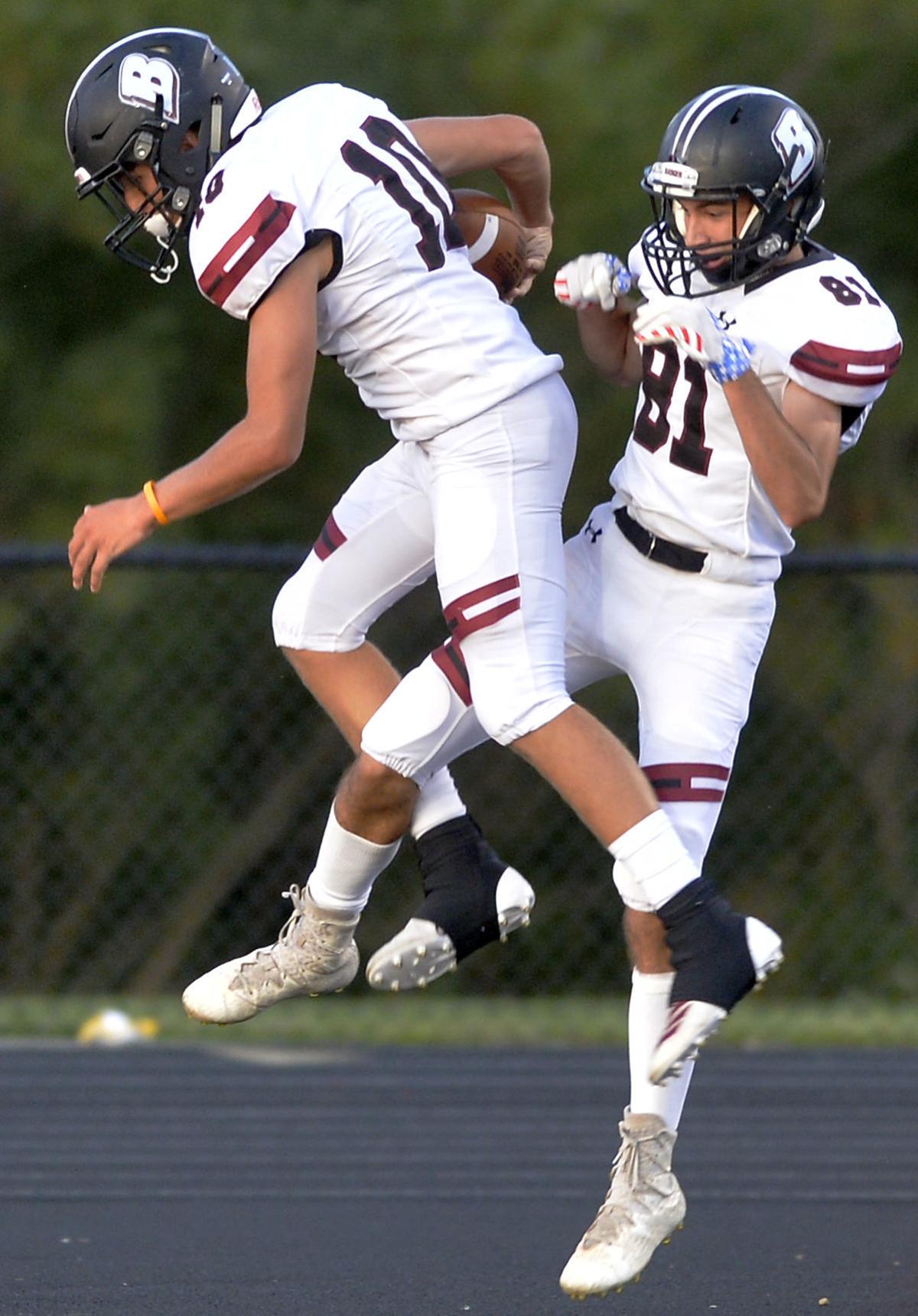 Lake Geneva Badger's Tannor Garrels, left, and Kerry Gleiter get a bit tangled up celebrating Garrels’ touchdown run in the first half. 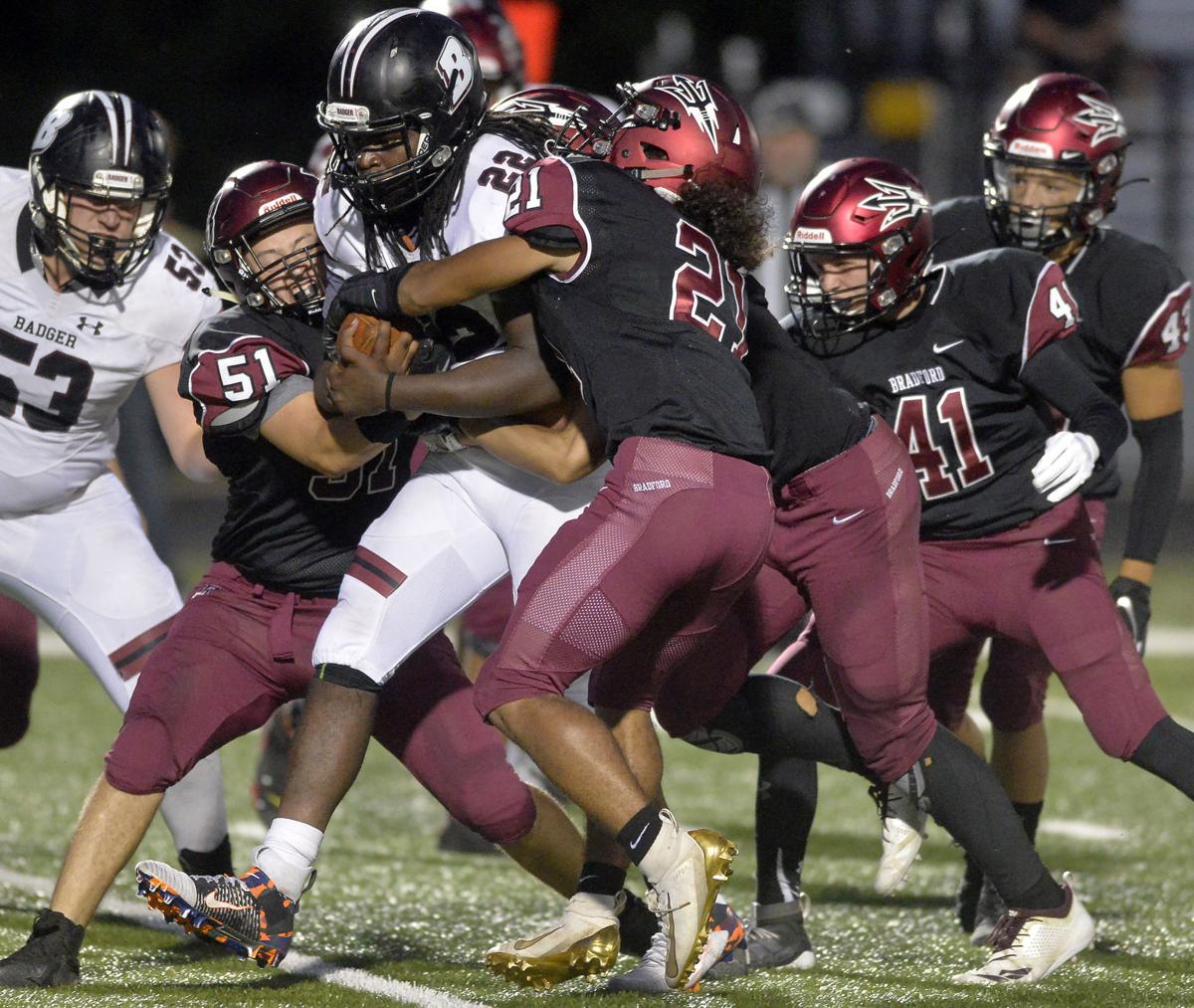 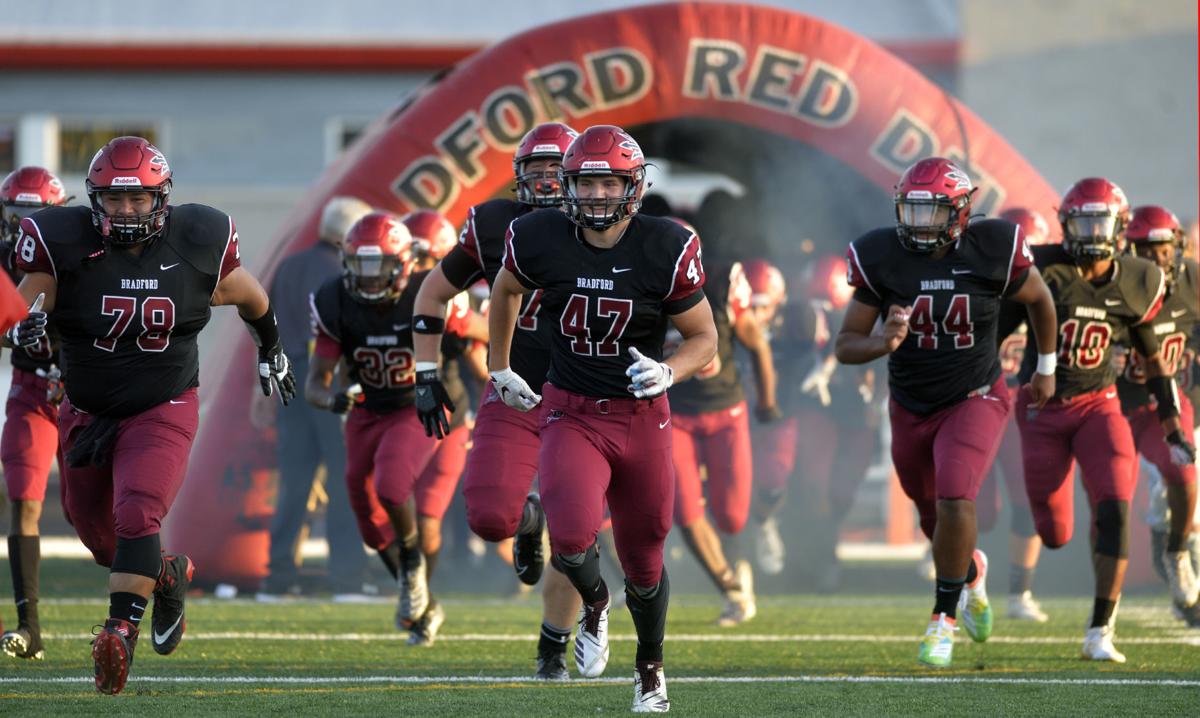 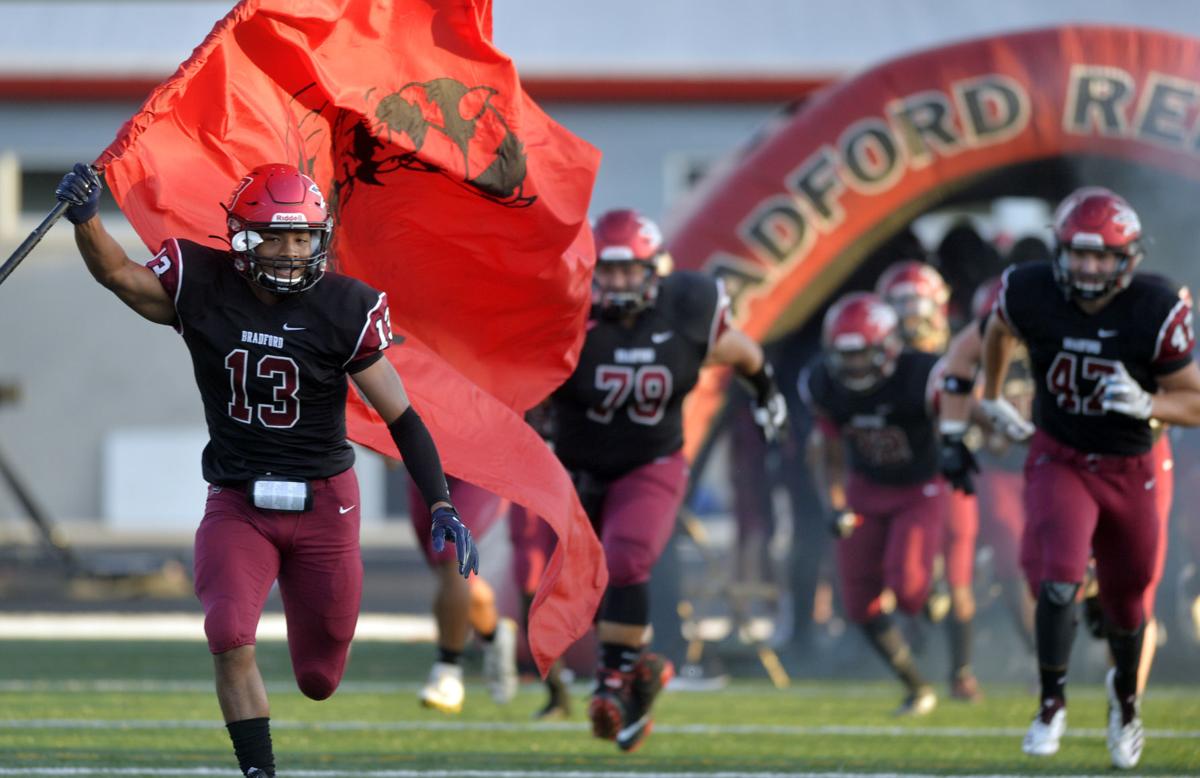 Bradford's Will Darden, left, lead the the onto the field. 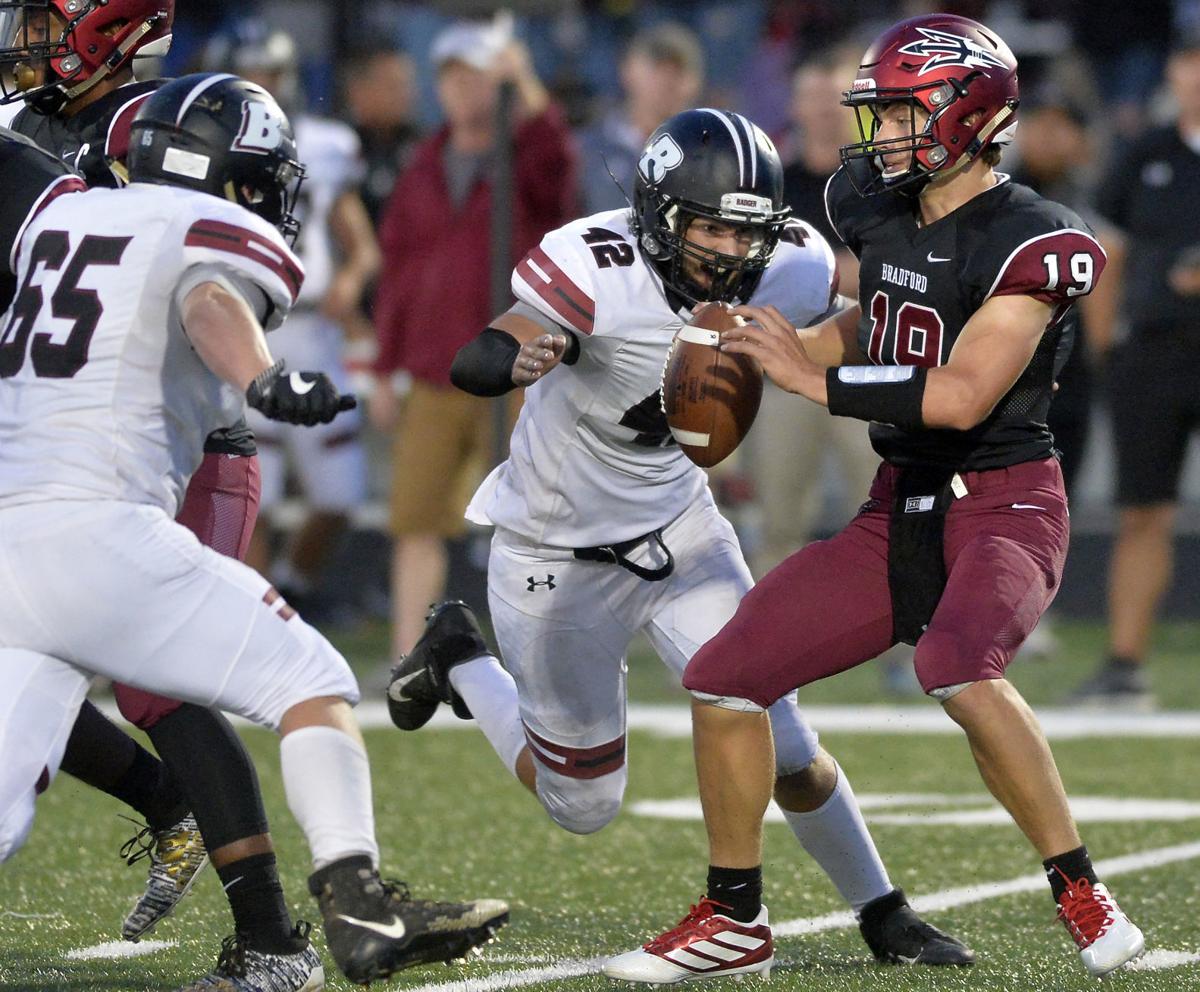 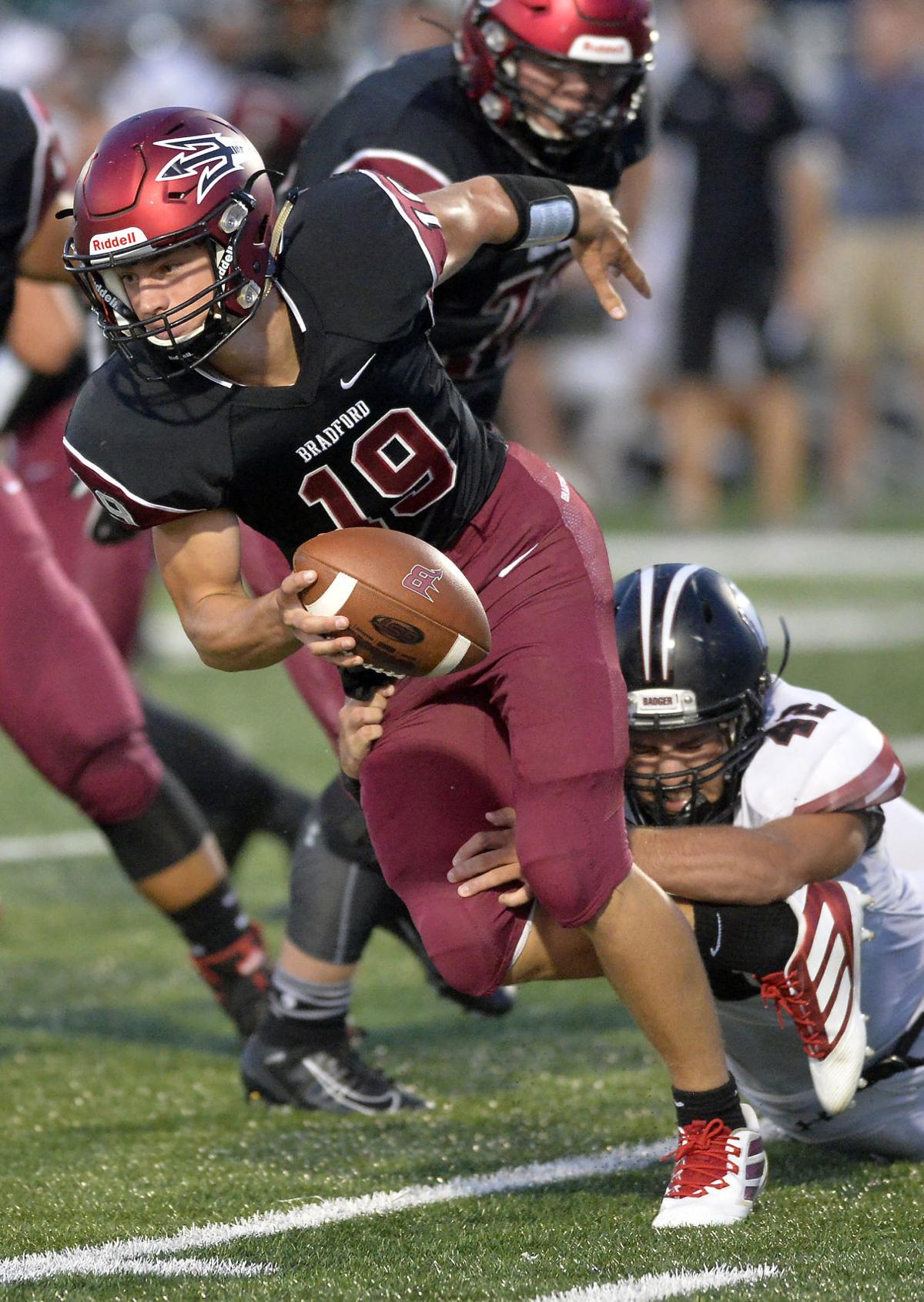 Whatever preparations the Bradford football team made for an experienced, efficient Lake Geneva Badger squad were laid to waste quickly Friday night.

The Red Devils were shredded by the Badgers' flexbone offense, and Bradford's offense fared little better on the other side of the ball as Badger dominated thoroughly for a 42-14 non-conference win at Bradford Stadium.

Badger (2-0) threw the ball just once, because they had no need to. The Badgers racked up 453 yards on 45 rushing attempts, an average of 10.1 yards per carry.

Senior fullback Cole Gabor-Pullen ran for 188 yards and two touchdowns on 14 carries, senior wingback Drew Laskowski had 106 yards and a score on eight attempts, junior wingback Tannor Garrels had 82 yards and a touchdown on just five carries and senior quarterback Grant DuMez — the one reading the defense — added 55 yards and two scores on 11 attempts.

"When you have a lot of young kids, they tend to freak out a little bit," Bradford coach Troy Bowe said. "They don't execute the plan and don't execute what they've been taught to do. When it's happening fast and you don't simulate that in practice, that's what happens."

Bradford (0-2) gained just 85 yards in falling behind 21-0 at halftime, but the Red Devils finally put some points on the board this season.

Including a 15-0 shutout loss at Waterford in Week 1, Bradford had gone six quarters without a point until senior running back Will Darden took a swing pass from sophomore quarterback Nate Olson, made a nifty move and scored from 36 yards out with 5 minutes, 27 seconds left in the third quarter.

The host Hawks scored 31 unanswered points, including 24 straight in the second quarter, to take a commanding lead en route to the non-conference win.

Trailing 6-0 in the first quarter, Indian Trail's Nijae King gave the Hawks the lead for good when he recovered a fumble in the end zone — which began the scoring blitz.

Quarterback Argjent Ismaili connected on touchdown passes of  17 and eight yards to Fred Ferati and Kameron Lee, Amariyon Lynch-Gordon ripped off a 64-yard touchdown run and kicker Payton Metzger connected on field goals of 23 and 24 yards to build the lead to 34-6.

Zion-Benton (0-1) scored 28 second-half points to make the score seem closer than it was, as the Hawks never were in danger of losing control of the game the rest of the way.

"You're always happy with a win," Indian Trail coach Paul Hoffman said. "We talked all week long that we just need to keep maturing and fixing the little mistakes and just have great discipline. This week, the discipline got better.

"... We're just striving to play our best game. Points happen and points don't happen sometimes. The kids came out and rebounded well (from last week's loss) and reacted well. We just have to keep improving every week. That's our goal."

Sophomore Xavier McWhorter led the Hawks with 134 yards rushing on 21 carries and two touchdowns, while Lee, a junior, caught five passes for 87 yards and a score.

Indian Trail rushed for 293 yards on 33 carries and held Zion-Benton to just 11 yards on 30 attempts. The teams combined for 30 penalties for 219 yards, including 19 for 143 yards for the Zee-Bees.

Senior Joseph Tanski scored two touchdowns, one on each side of the ball, during a big second quarter as the visiting Panthers improved to 2-0 with a non-conference win at Hammes Field in Racine.

Trailing 13-7 after the first quarter, the Panthers outscored the Eagles 21-0 in the second for a 28-13 halftime lead.

After neither team scored in the third, Wilmot extended its lead to 35-13 on junior Caden Mulhollon's 11-yard touchdown run.

Mullhollon led the Panthers with 50 rushing yards on nine carries, Watson went 7-of-12 through the air for 140 yards with two touchdowns and two interceptions and junior Leo Falletti caught two passes for 74 yards.

"I think we wanted to just continue getting after them on defense, keep giving them pressure and make them drive the ball. And then, offensively, we were able to make some big plays in the passing game."

Ben Brawner finished 14-of-27 for 175 with two touchdowns and two interceptions for the Eagles (1-1), while Nick Fugiasco caught four passes for 102 yards and two scores.

The visiting Eagles improved to 2-0 in the non-conference game, making them spotless in two games in their return to varsity action after a three-year hiatus.

McDaniel's 5-yard run and Eifert's 50-yard interception return put the Eagles ahead 12-0 with 5:22 left in the first quarter.

The visiting Falcons dropped to 0-2 with the non-conference defeat in Illinois.

It was the season opener for Woodstock, a member of Illinois' Kishwauke River Conference.

No other details were available to the News by late Friday night.

For more on all of Friday's action, pick up Sunday's print edition of the News.

County wrestlers advance to sectional round

There certainly will be no shortage of a Kenosha County feel to next weekend's WIAA sectional wrestling tournaments.

Wirch headed back to state swim

Milwaukee Brewers' reliever Josh Hader will earn $4.1 million this season rather than the $6.4 million he requested.

WIAA Division 3 state champion DeForest has Trey Schroeder, Cole Yocum and Colby Hartig among those selected for the Large Schools game on July 18 at UW-Oshkosh.

The Spartans are hiring Mel Tucker, who played defensive back for UW in the 1990s, away from Colorado, with the first report by Bruce Feldman of The Athletic.

Giannis Antetokounmpo is being marketed to overtake LeBron James as face of NBA, but he's focused on 'essence' of basketball

Therein lies the conundrum for those pushing Giannis Antetokounmpo to overtake LeBron James as the sport's most famous player: What if he doesn't want to be the face of the NBA? Or he's simply ambivalent?

Kenosha gearing up for Wisconsin Marathon

The Wisconsin Marathon will return to Kenosha on May 2.

There wasn’t a playbook to follow as a small group within the UW men’s basketball program tried to navigate the aftermath of Erik Helland using a racial epithet in front of players last month.

Lake Geneva Badger's Tannor Garrels, left, and Kerry Gleiter get a bit tangled up celebrating Garrels’ touchdown run in the first half.

Bradford's Will Darden, left, lead the the onto the field.