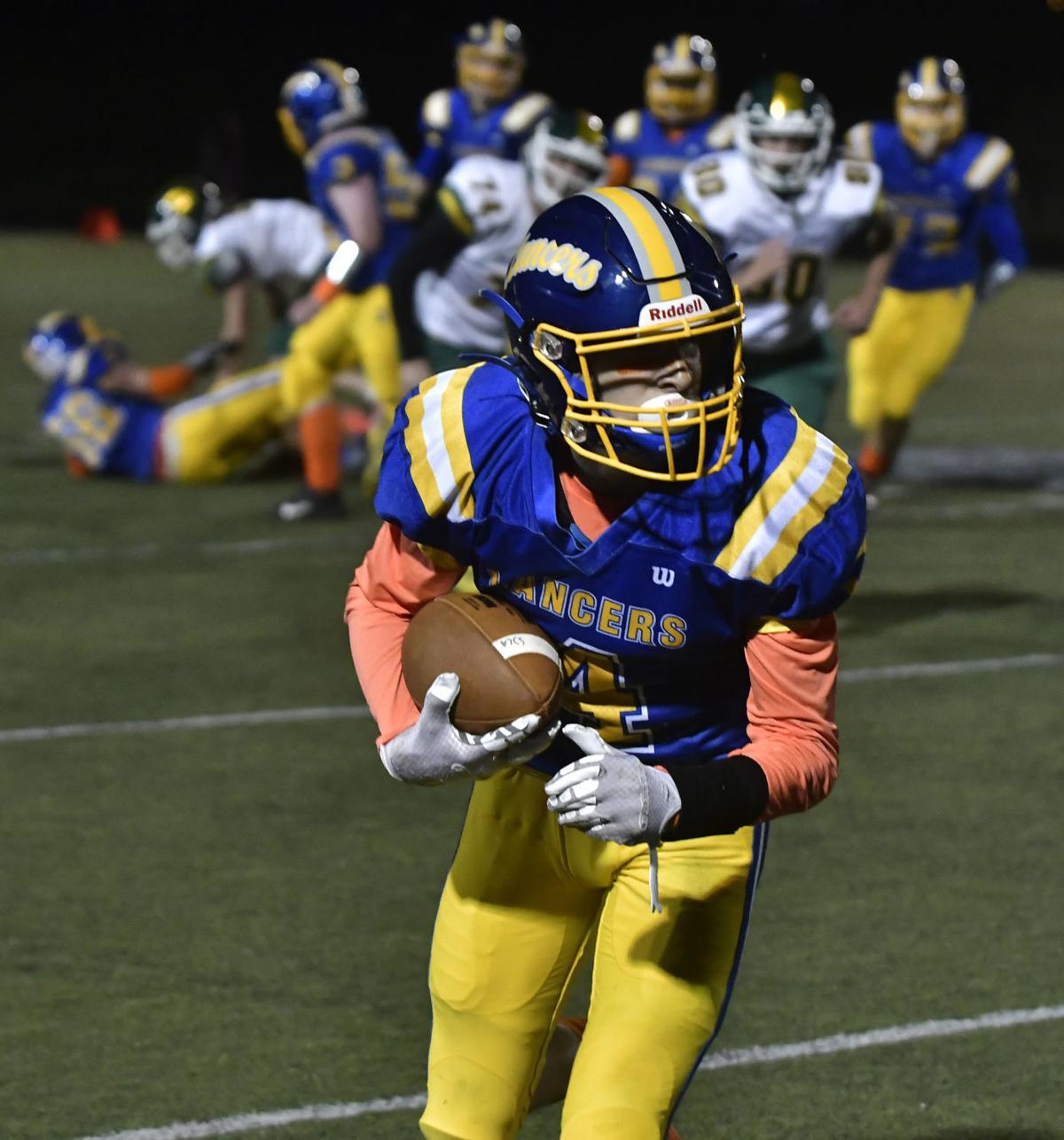 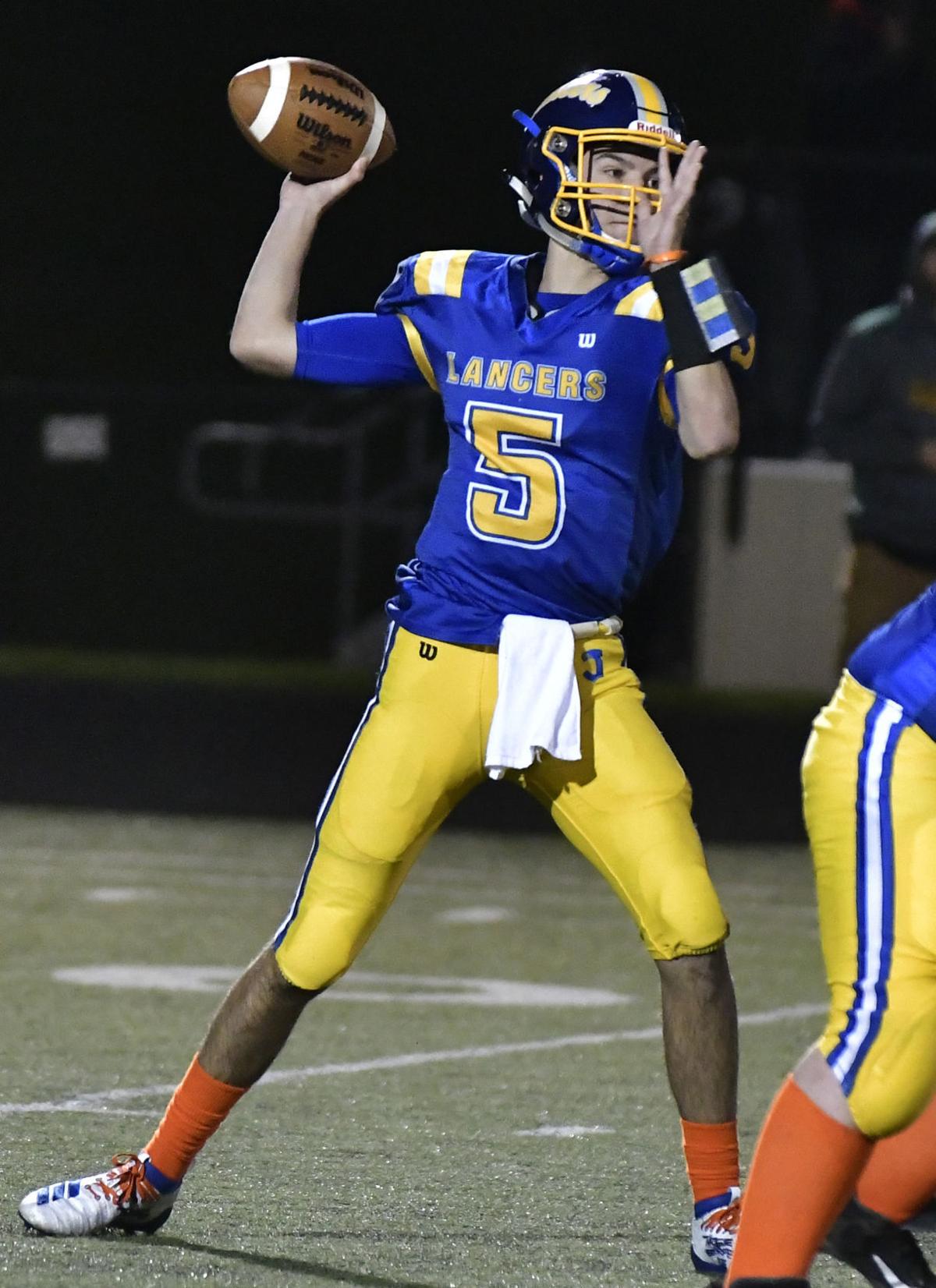 St. Joseph quarterback Jacob Ashmus looks to pass during a game last season. Ashmus started under center as a sophomore and will lead the Lancers’ offense again in 2020.

BURLINGTON — Senior quarterback Zack Watson found senior receiver Joey Tanski just inside the back line of the end zone on a fourth-and-goal play from the 3-yard line with 17 seconds left, and sophomore Blake Weaver drilled the ensuing extra point to lift the Wilmot football team to a thrilling 35-34 victory over Burlington in a Southern Lakes Conference thriller at Don Dalton Stadium on Friday night.

"The play call was to have Joey run all the way across the field, because we saw something earlier in the game," Watson said. "... But there were guys on the left, and Joey made a great, great play, just stopping right there, and I just threw it to him.

"I have so much trust in Joey. He's been my receiver since eighth grade. Him and I have great chemistry."

Watson's touchdown pass to Tanski capped an epic 16-play, 65-yard drive that lasted 6:52 and drained nearly the entire clock after the Demons had taken a 34-28 lead with 7:15 remaining on senior quarterback Dalton Damon's 1-yard sneak.

But senior Skyler Danielson, Burlington's backup kicker, missed his only extra point in five attempts Friday to keep the lead at six points.

The victory pushed Wilmot (6-1 overall) to 4-1 in the SLC, assuring the Panthers of postseason eligibility for the 10th consecutive season.

"It says a lot for our kids and our program," Wilmot coach Keiya Square said. "We've had three different head coaches (during the postseason streak), and we've been able to kind of keep the train rolling from what Mike Greinke put in place and then when (Erick) Kaiser was going.

"I give these kids a lot of credit. We've lost some big-profile seniors the last two years, and these kids continue to grind and continue to work and pick each other up. It's a real family."

Burlington (6-1 overall) was knocked from the ranks of the unbeaten and is now tied with Wilmot for second place in the conference at 4-1, a game behind 5-0 Waterford, which defeated Delavan-Darien 41-6 on Friday.

But the Demons get a chance to pull right back into a tie with the Wolverines when they host them next week.

Wilmot rushed for 341 yards on 53 attempts, with Watson going for 167 yards and a score on 29 carries and junior burner Leo Falletti rushing for 110 yards and a touchdown on nine attempts.

Watson went 6-of-10 passing for 81 yards threw touchdowns of 4 yards to Falletti and 5 yards to freshman Asher Schroeder in addition to the game-winner to Tanski.

The Panthers had three scoring drives of at least 10 plays, going 6-for-6 on fourth downs during those marches.

The Demons countered with quick strikes, including second-half touchdown runs of 72 and 76 yards by junior Zach Wallace, who finished with 213 yards on only 11 carries for an average of 19.4 yards per carry.

The host Lancers put an early scare into the state's fourth-ranked Division-4 squad at Jaskwhich Stadium.

Eventually, however, the Spartans showed why they deserve such accolades.

The fast start played out exactly as planned, according to St. Joseph coach Matt Rizzo.

"Our game plan was to stay on the field offensively and pick up first downs, which I thought we did in the first half pretty well," he said. "We shot ourselves in the foot a few times on a couple drives, but we were moving the ball, picking up first downs and chipping away at them."

The game seemed to turn late in the second quarter.

Martin Luther recovered a St. Joseph fumble and turned that miscue into a 25-yard touchdown pass from quarterback Brady Hoppert to Sylvere Campbell with 48 seconds left before halftime.

St. Joseph (5-2, 3-2) added a pair of fourth-quarter touchdowns to close things out. Sophomore quarterback Jacob Ashmus connected on a 4-yard pass to junior Max McCarville, followed by a 3-yard run from Gessert.

McCarville caught nine passes for 117 yards, while Gessert had 20 carries for 95 yards. Ashmus completed 14-of-20 passes for 129 yards.

The game was delayed for several minutes late in the fourth quarter when Martin Luther senior Michael Strohmeyer suffered what appeared to be a head or neck injury. Strohmeyer was taken off the field on a stretcher by rescue personnel, but Rizzo said he thought it was just precautionary.

RACINE — The shouts of joy you may have heard emanating from about 13 miles to the north at about 9:30 p.m. were those of the Indian Trail football team.

After all, it isn’t every day that the Hawks achieve what they did on Friday at Horlick Field when they turned back the host Rebels in a key Southeast Conference game to secure a WIAA Division-1 playoff berth for the sixth time in their eight seasons as a varsity program.

"The victory means a lot," said senior wideout Amariyon Lynch-Gordon, who reeled in nine of his 13 targets for 114 yards and a touchdown and added four carries for 59 yards and another score.

"We haven’t beat them ever on this field, so coming out here and winning by a big (margin) … we’re going to go party in the locker room.”

Indeed, there’s cause for celebration when you haven’t beaten a team since 2014 and the opponent has racked up 405.3 rushing yards per game in the process.

Indian Trail coach Paul Hoffman, in his third year at the helm, said that his team decided to meet power with power.

This time, the visiting Hawks were the aggressors from the start, punctuating a seven-play, 52-yard opening march on junior quarterback Argjent Ismaili’s 10-yard sprint up the middle to paydirt.

After Horlick, determined to use the game as a springboard back into the playoff hunt, scored on its first two possessions to claim a 14-7 lead, Indian Trail responded in lightning fashion.

The Hawks would subsequently score on a 1-yard run by sophomore Xavier McWhorter and a 34-yard field goal by junior Payton Metzger on the final, untimed play of the half after consecutive Horlick penalties to take a 24-14 lead into the locker room.

After the intermission, the Hawks resumed their attack when Lynch-Gordon hauled in an underthrown pass from Ismaili (13-of-21, 176 yards, two TDs) for a 33-yard touchdown with 7:51 left in the third quarter.

The Hawks put the game well out of reach on their next two possessions, with junior Clayton Bishop snaring a short toss from Ismaili and rambling 52 yards past several defenders with 2:01 left in the third stanza and Lynch-Gordon taking the handoff on a fourth-and-5 play and racing untouched to paydirt from 34 yards away with 4:25 left in the game.

Trailing 10-0 at halftime, Bradford took a 13-10 lead on sophomore Michael DeLuca's 19-yard fumble return for a score in the third quarter and sophomore quarterback Nate Olson's 2-yard scoring run in the fourth.

Olson finished 11-of-23 passing for 113 yards and two interceptions.

In consecutive weeks against Indian Trail, Bradford and Tremper in SEC competition, the Sabers didn't allow a single point.

Franklin's third consecutive shutout and fourth in five games came at the expense of the host Trojans at Ameche Field on Friday.

The Sabers (6-1 overall) stayed alone atop the SEC at 5-0. Ranked No. 6 in Division-1 in the latest WisSports.net state coaches poll, Franklin has now won 29 straight games against Kenosha County teams.

Franklin scored all its points in the first half against Tremper (2-5, 1-4) to institute a running clock.

Senior Justin Dierckens had four catches for 32 yards for the Trojans, while junior Tyler Santi hauled in six passes for 21 yards.

Senior Tyme Eppers gave the Falcons a 14-7 halftime lead with two first-quarter scores, one on a 74-yard interception return and another on a 14-yard run.

The visiting Eagles lost their fifth straight to drop to 2-5, all considered non-conference games.

Including sacks, CLS had minus-25 yards rushing on 23 attempts.

WIAC suspends all sports through Dec. 31

A structure for the spring semester has yet to be determined.

Spring Valley Country Club in Salem will be the site of the fourth annual U.S. Speedgolf Championships, scheduled for Oct. 10-11.

Waiting game over for Franz at Central

Tyrone White died in a crash in Florida on Sunday that left his wife and James' mother Lisa White in critical condition.

After the state events were ruled out at University of Wisconsin facilities in a decision last week, new sites were set for girls golf, girls tennis and girls swimming and diving this fall.

St. Joseph quarterback Jacob Ashmus looks to pass during a game last season. Ashmus started under center as a sophomore and will lead the Lancers’ offense again in 2020.