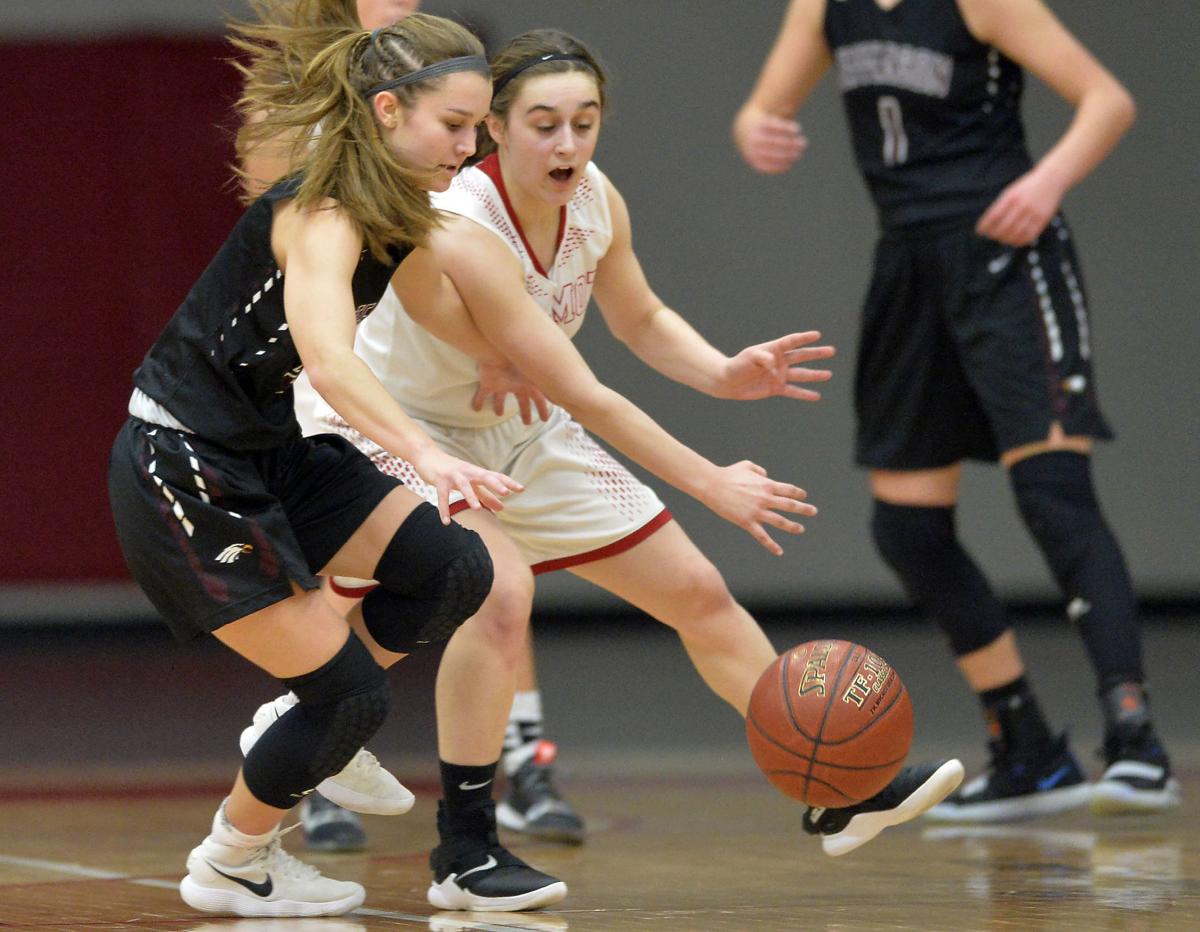 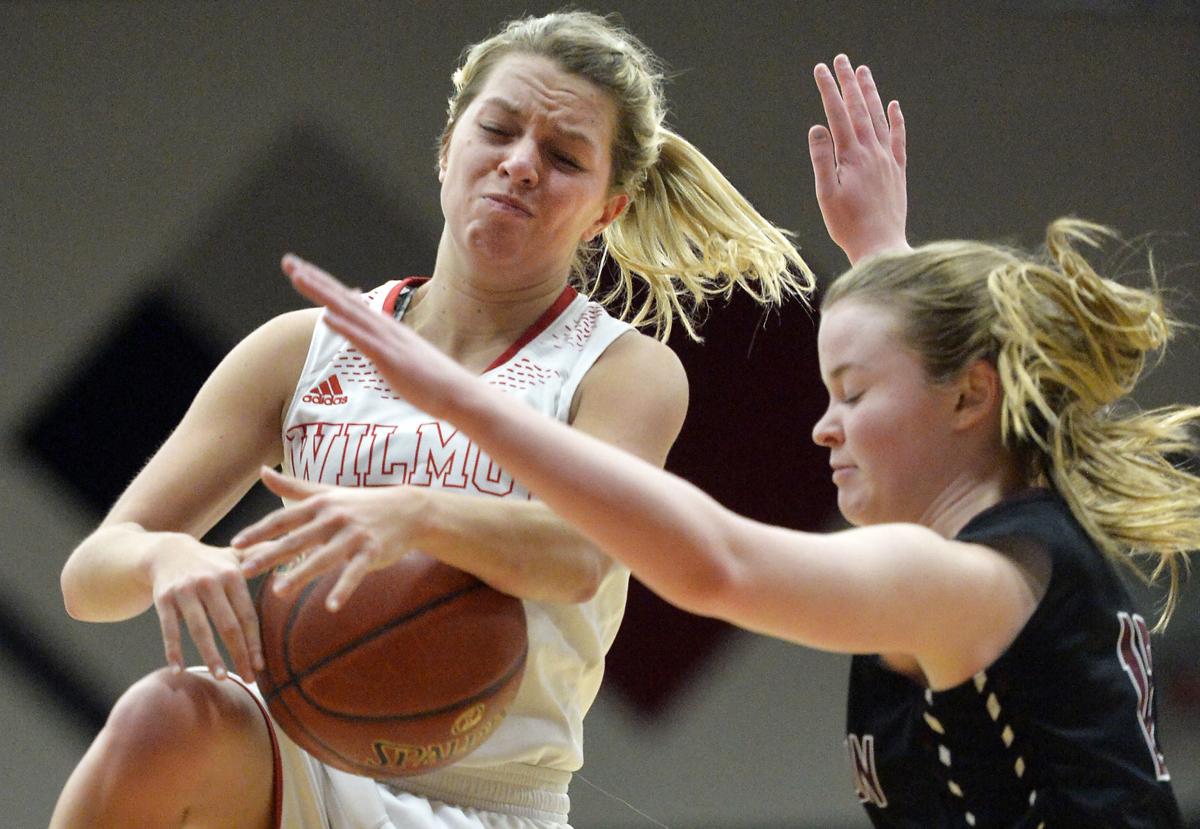 Wilmot’s Haley Lamberson drives to the basket, but is called for traveling during Friday night’s Division-2 regional semifinal against visiting Jefferson. 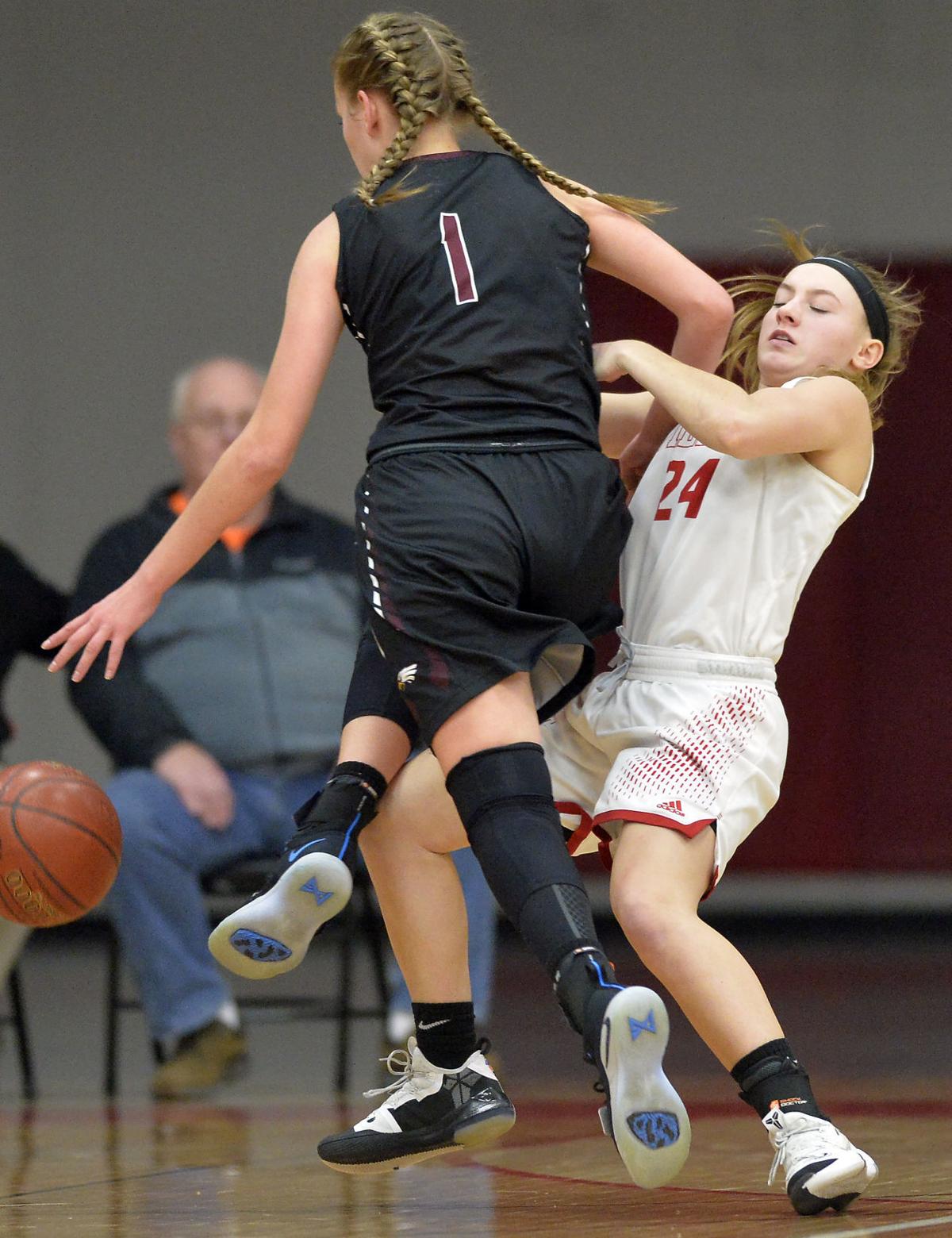 The Wilmot girls basketball team carried an 11-game winning streak into the postseason.

Unfortunately for the Panthers, it didn’t get to 12.

In an upset, visiting Jefferson, the No. 7 seed, notched a 56-52 win over No. 2 seed Wilmot in a WIAA Division-2 regional semifinal Friday night.

Jefferson (12-11) advances to play at third-seeded Milton in a regional final tonight. Wilmot finished its season at 15-7.

The 12th-seeded Trojans trailed 41-15 at halftime in their regional semifinal loss at fifth-seeded Madison East.

Madison East, which improved to 14-9 and will play at fourth-seeded Madison La Follette in a regional final tonight, got a game-high 21 points from Ashayla Moseberry and went 16-of-23 from the free-throw line to Tremper’s 1-of-6.

The 14th-seeded Red Devils wrapped up their season with a 5-18 record following a regional semifinal loss at third-seeded Madison Memorial.

The Cardinals (18-5) will host ninth-seeded Racine Horlick in a regional final tonight, while Indian Trail finished with a 4-20 mark.

Foster poured in a game-high 30 points, going 13-of-14 from the free-throw line, while Matrise went 8-of-11 from the charity stripe in scoring 25. Each player made three 3-pointers, as well.

The Lancers trailed just 25-19 at halftime to a team that swept them during the Metro Classic Conference season — including a 25-point decision on Feb. 14 — and hung tough in the second half but ultimately finished with a 6-17 record.

“... This was my first season as the varsity coach, and I love the improvement our ladies have shown, but the friendships are even more valuable. We are building something special at St Joe’s, and very soon others will notice and circle that date on the schedule when they play us.”

The state’s fifth-ranked Division-2 squad according to WisSports.net jumped out to a 15-point halftime lead and cruised past the visiting Trojans in the regular-season finale for both teams.

Jaeden Zackery poured in a game-high 28 points to lead the Falcons, followed by Joey Michelau with 14 and Adam Simmons with 13.

Tremper was led by Zach Johnson’s 18 points, followed by Jyon Young with 11, Jake Gross with nine and Zayshan Coleman with eight.

Andrew Alia led the Lancers’ attack with 20 points, while Caiden Lecce and Tim Berry each scored 14. St. Joseph went 26-of-34 from the free-throw line.

St. Joseph received a No. 7 seed in the WIAA Division-4 postseason draw and will host No. 10 seed Milwaukee Destiny in a regional quarterfinal at 7 p.m. Tuesday.

“Now that the regular season is over, the playoffs begin,” St. Joseph coach Brandon Morris said. “Hopefully we can make this one of the most memorable seasons our seniors ever had. Their commitment to hard work and dedication will leave an everlasting legacy.”

John Romano: 10 reasons the Buccaneers will beat the Packers

Green Bay began the week as a 3.5-point favorite in the NFC Championship Game, but a Tampa columnist provide 10 reasons the Buccaneers will win Sunday.

Green Bay's second-year coach took the ball out of the hands of Aaron Rodgers, the NFL's presumptive MVP, and put his trust in a defense that hadn't consistently delivered all season.

Exclusive: Aaron Rodgers — in his own words — on his ‘journey of self-actualization,’ why he’s kinder now, and why he’s not worried about how many more Super Bowl chances he has left

Packers quarterback Aaron Rodgers, who again has his team a win away from the Super Bowl, explains how he’s a different man than he was when he led Green Bay to the title after the 2010 season.

‘I hugged him, and I told him I loved him': How Aaron Rodgers said goodbye to Ted Thompson

“He was a really, really humble man, and I definitely appreciated that humility,” Aaron Rodgers said of Ted Thompson, the former Packers GM who died on Wednesday.

The NFL announced that 7,500 health care workers vaccinated for the coronavirus will be given free tickets to next month's Super Bowl in Tampa.

Wilmot’s Haley Lamberson drives to the basket, but is called for traveling during Friday night’s Division-2 regional semifinal against visiting Jefferson.