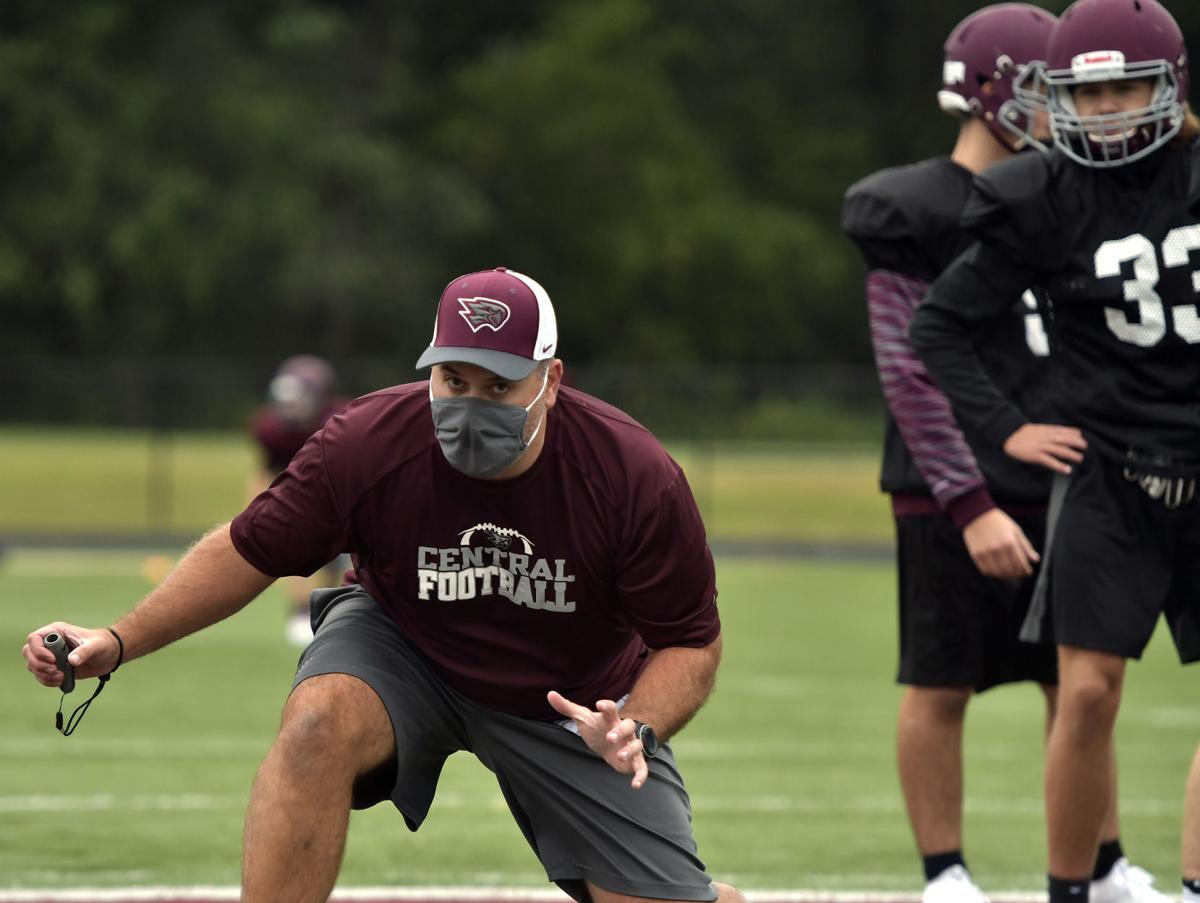 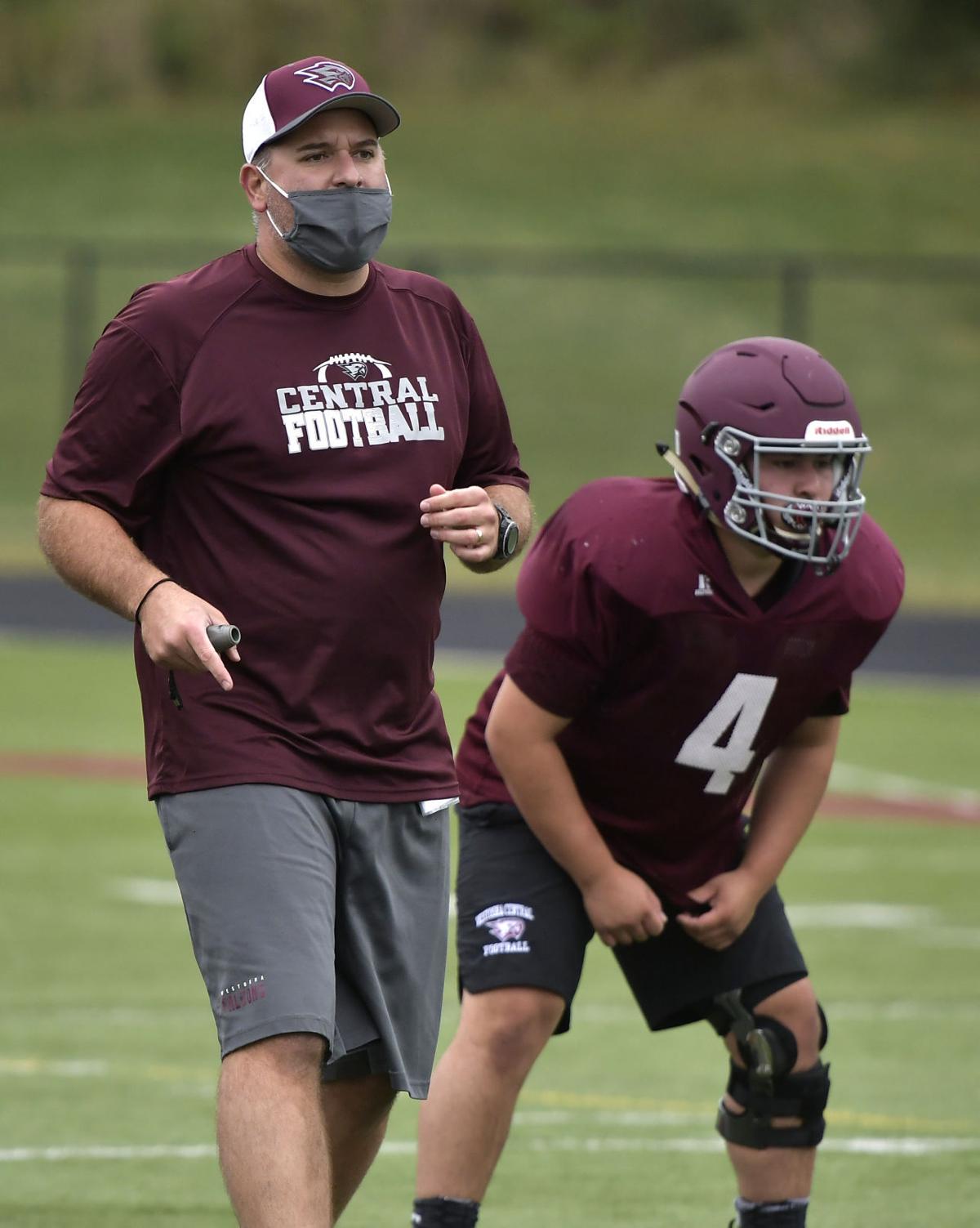 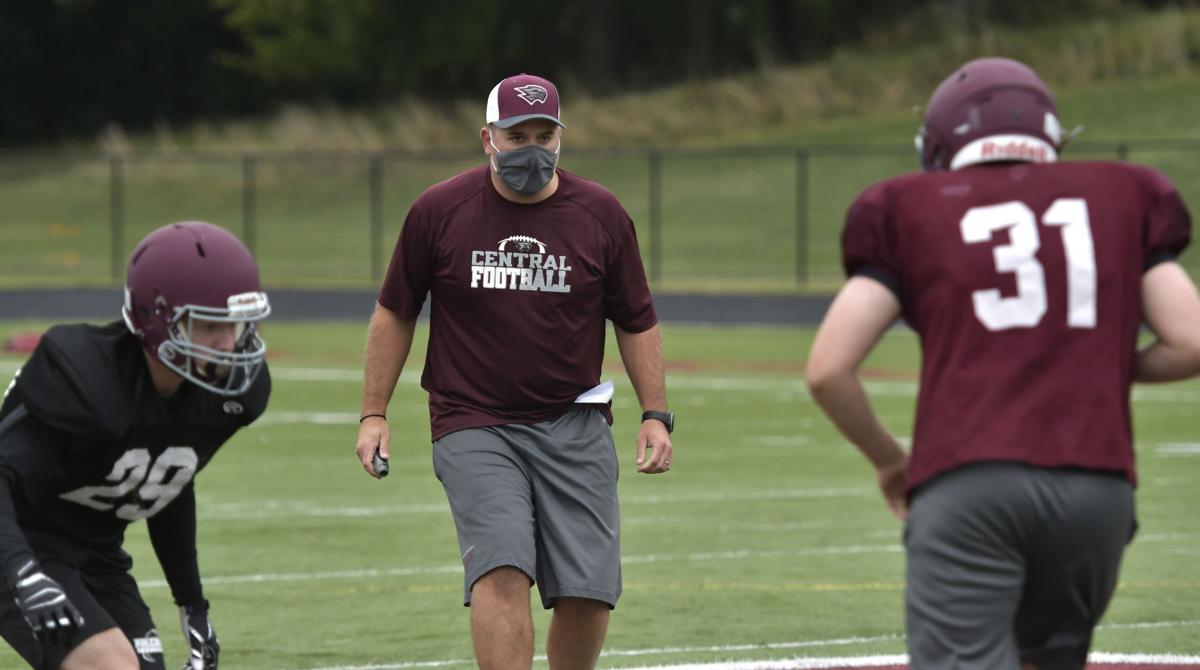 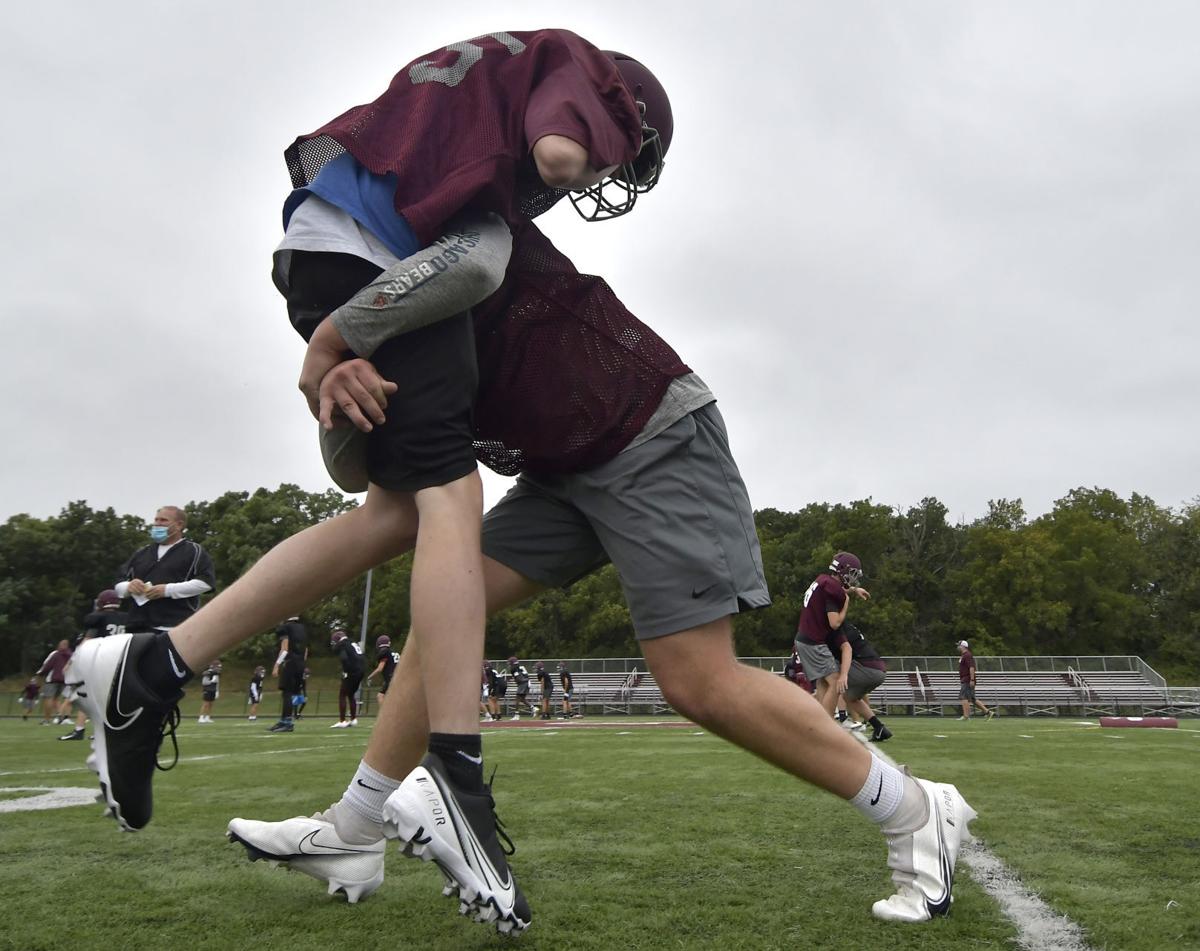 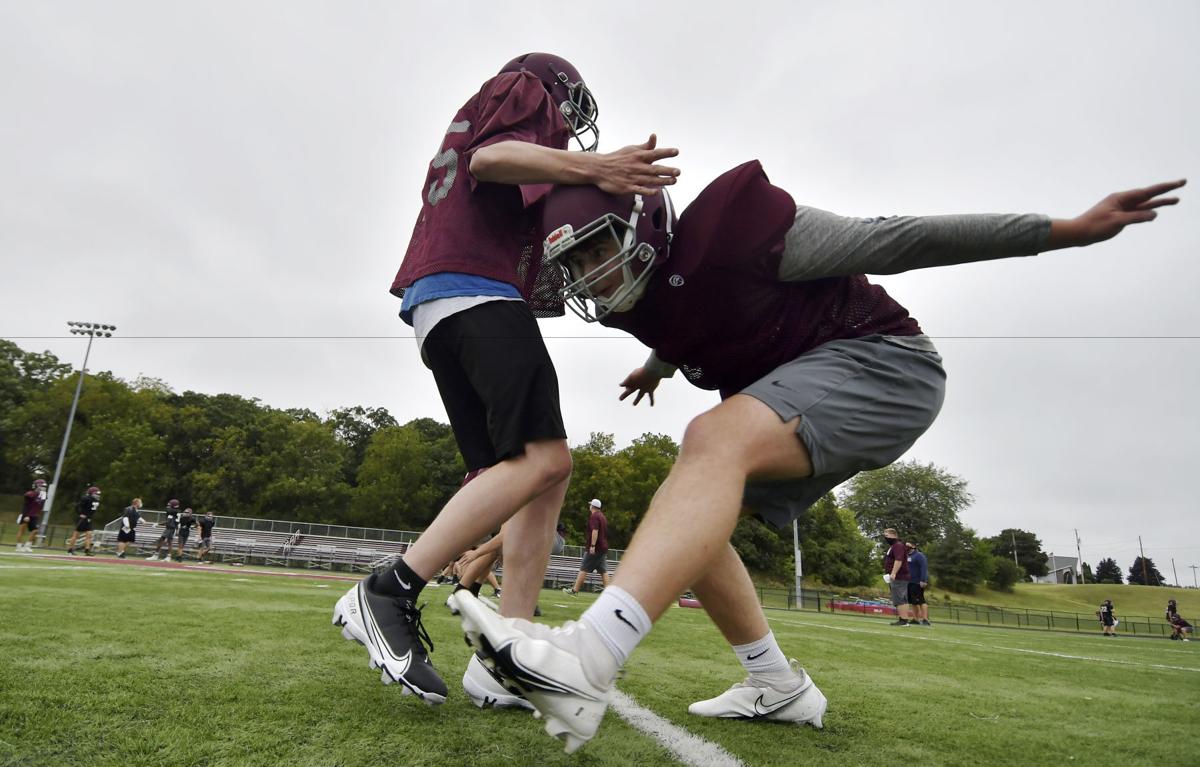 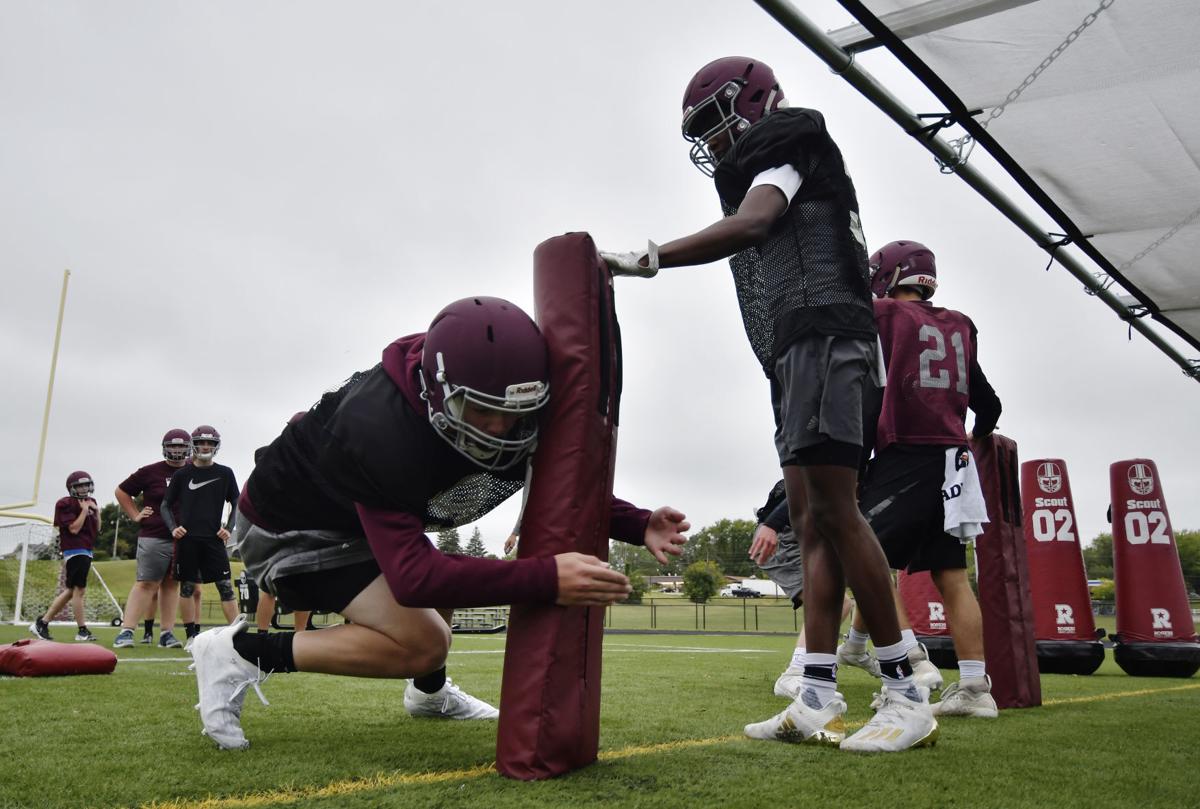 The Central High School football team practices for the delayed start of the prep season. The Falcons open play tonight at Lake Geneva Badger at 7 p.m. in a Southern Lakes Conference game. It marks the debut of Central first-year head coach Jared Franz. See more game previews for tonight’s kickoff week in Sports in Section C and at kenoshanews.com. 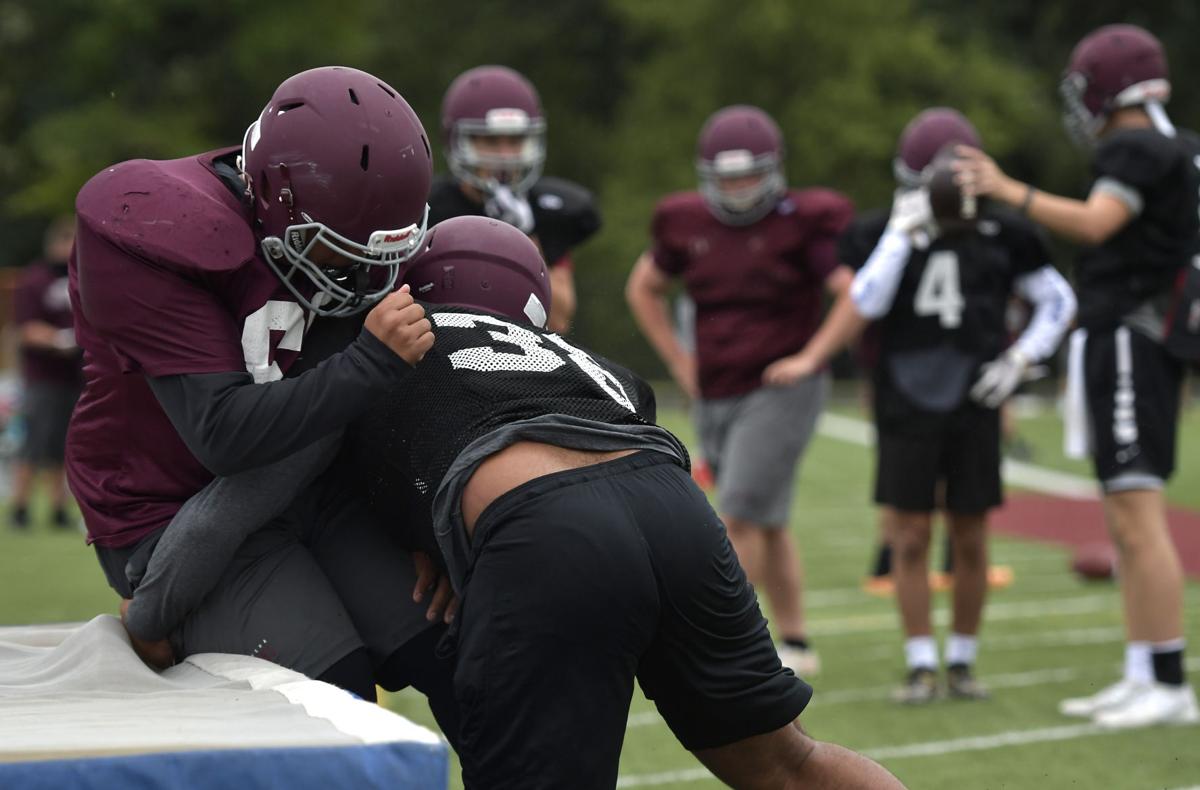 Shortly after Franz learned he was getting his first head coaching job when he was named Central's head man in early January, a former teammate of Franz's at Ottawa (Ill.) Township High School organized a luncheon to visit their high school coach, Tim Jobst.

Jobst, an Illinois Hall of Famer as a player and coach, had fallen ill. Sadly, he passed away on May 2, but Franz was grateful he had a chance to tell his mentor he'd gotten his first head job.

"I got to meet with him and say, 'Hey, I got to be a head coach,'" Franz said Friday afternoon at Central during the Falcons' fifth day of practice. "I look back at some of the things he taught me. He was always incredibly demanding but incredibly respectful and caring. He had a really great quote from his obituary about how he wanted to treat players in his program.

"He was an offensive guy and I was more of a defensive player, but the way he treated everybody was something that I try to emulate.

"... It kind of made me go back, and that has reinvigorated that belief in how I should be as a head coach."

Last week, Franz finally got the chance to start implementing those beliefs on the field.

Like all football programs in the state, per WIAA rules Central was allowed to start practicing on Monday. After months of speculation on when the season would begin — if it would begin — and endless time spent in weight rooms and preparing at home, the crack of pads was even more sweet this year than it usually is when practice starts.

"It was a long offseason for a lot of the coaches around the state, but to finally get out here, it feels like a dream. It really does," Franz said. "The enthusiasm is through the roof. The guys are excited to be out here. I think anytime something is taken away from you, or at least it could be taken away — every day we're out here, we don't know how many we're going to get.

Especially for a first-year head coach.

"You can talk about it all you want and think you've got all the pieces figured out, but then when we got out here and we got Monday done, I kind of looked around and went, 'Well, that wasn't that bad,'" Franz said. "And Tuesday was better than Monday, and so on and so forth. Day 5, our kids are sharp, they're coming out here, they know the expectations, and they're having fun."

Of course, even head coaches with decades of experience must feel like rookie coaches this season. So much is different, not the least of which is how late the season is beginning.

The Southern Lakes Conference is playing a conference-only schedule this fall, so the Falcons will play seven regular-season games instead of the usual nine and open Sept. 25 at Lake Geneva Badger. There was little time to ease even into the practice schedule, since Central began school the week before football practice started.

Franz pointed out that in a normal season, with practice starting in early August, there would be much more time to focus on just football with players still out of school. It's been especially taxing for the coaching staff, many of whom are also teachers.

"We were talking about how difficult it is," Franz, a social studies teacher at Central, said of his staff. "We were getting done with a full day of teaching, done with practice, getting home. We're all watching film and putting a couple clips together for our kids to watch on film. Some of us coaches are getting home to our families, eating dinner.

"... From the coaches who are here as teachers on staff, I really commend all the work that they're putting in."

But Franz pointed out that his players, who were out of school all spring and summer, benefit from being in school at the start of football. Franz had his players participate in "wellness challenges" — such as getting to bed by midnight and getting up before noon while getting eight hours of sleep — throughout the offseason, but he could only do so much to help maintain their schedules when they weren't in school.

And while Franz may be a first-year head coach, he's had a lot of experience and success in the high school coaching ranks.

He spent 12 years coaching all levels at Wilmot — minus 2016, when he took a season off to pursue an administration degree — and was a big part of the Panthers' perennial playoff runs under head coaches Mike Greinke, Erick Kaiser and Keiya Square. Franz then spent last season as Central's defensive line coach under Tyson Mengel, who resigned following the 2019 campaign.

Franz has credited Mengel with developing a positive character within the program, but it's no secret the Falcons are itching to win more. They haven't reached the playoffs since 2010, going 21-69 overall the last 10 seasons.

Franz is thrilled with the program's numbers, saying they're at 115 players now. He went to work with the program in January, talking to his players about how the program can get better, even sitting down and talking to the departing seniors from the 2019 team. Franz said the program held leadership meetings in the morning and developed a council of 12 players to communicate between their teammates and the coaching staff and make sure everyone was getting in the weight room and preparing.

Like every program, Franz and his staff have had to deal with much more than just getting ready for football. He credited Central athletic director Jon Lindh and school administration for helping him navigate through the offseason and implement COVID-19 safety procedures.

And now, as unusual as everything has been this offseason and as much as everyone is still taking things day-by-day moving forward, Franz can just run his program.

"All in all it's different, but at the end of the day, once the practice starts off, we're going," he said.

The Central High School football team practices for the delayed start of the prep season. The Falcons open play tonight at Lake Geneva Badger at 7 p.m. in a Southern Lakes Conference game. It marks the debut of Central first-year head coach Jared Franz. See more game previews for tonight’s kickoff week in Sports in Section C and at kenoshanews.com.