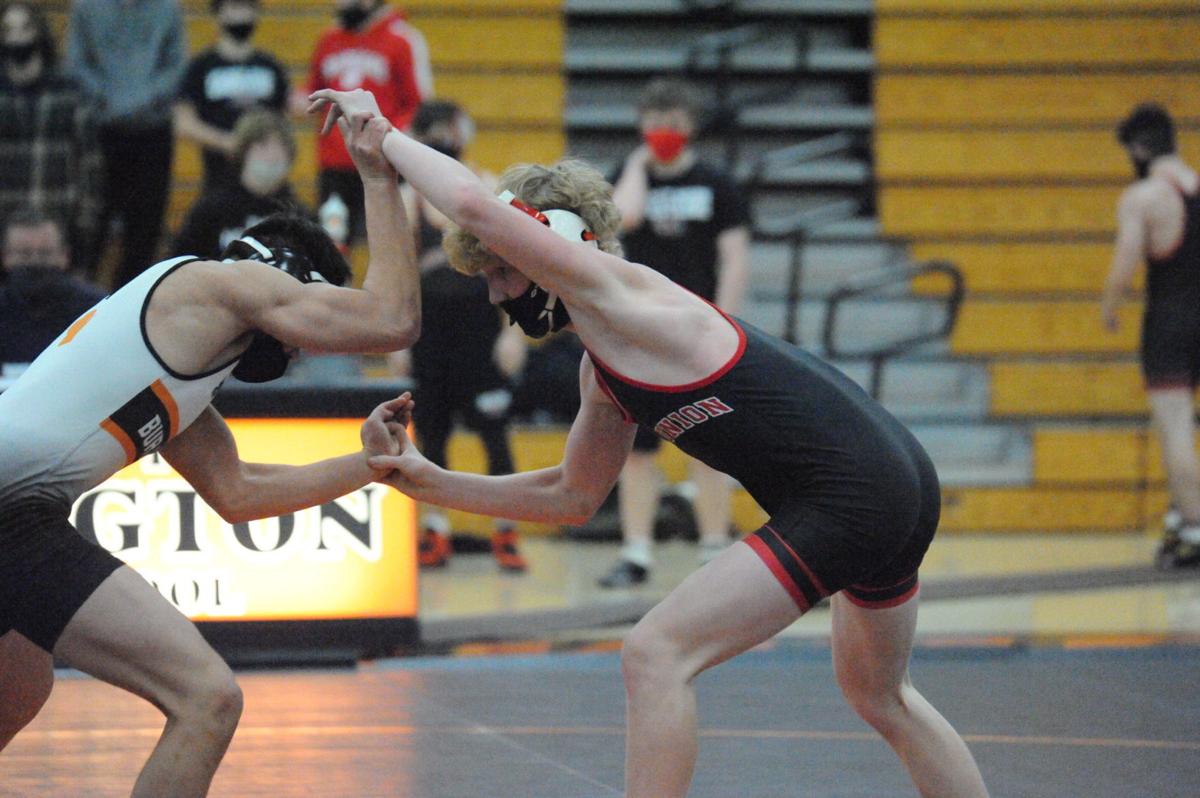 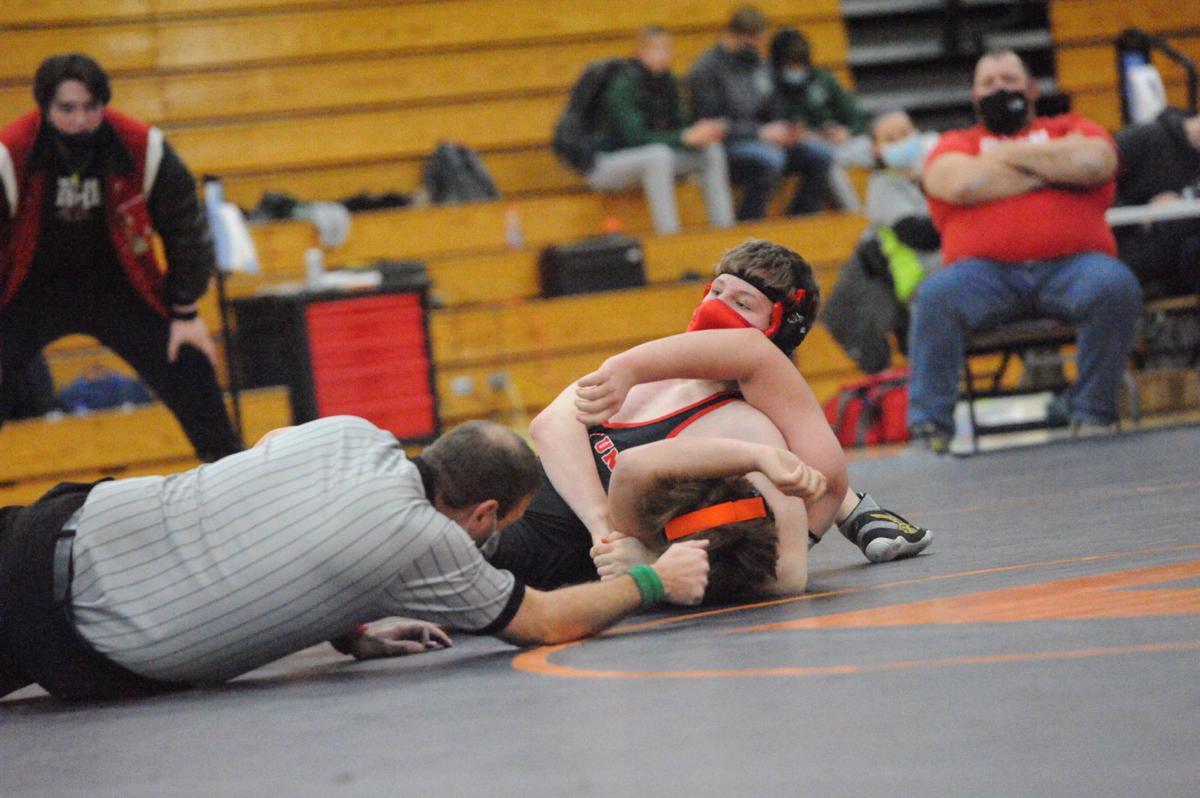 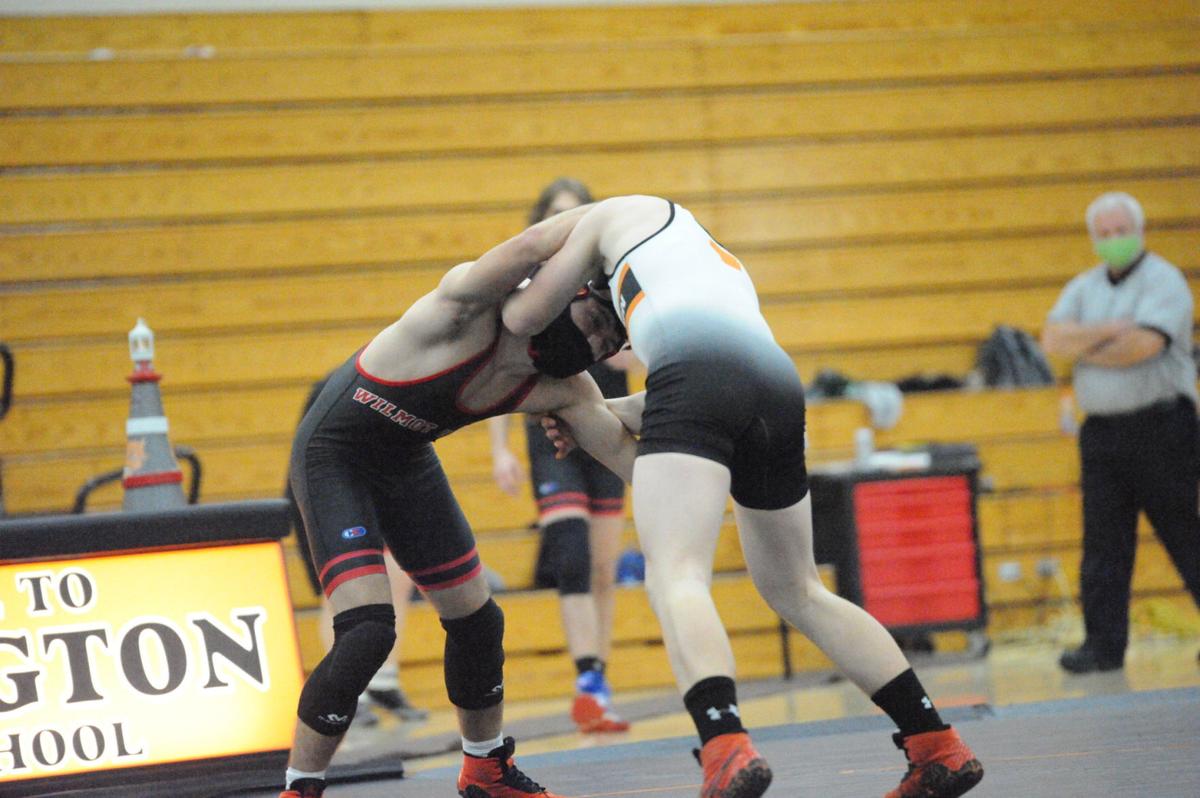 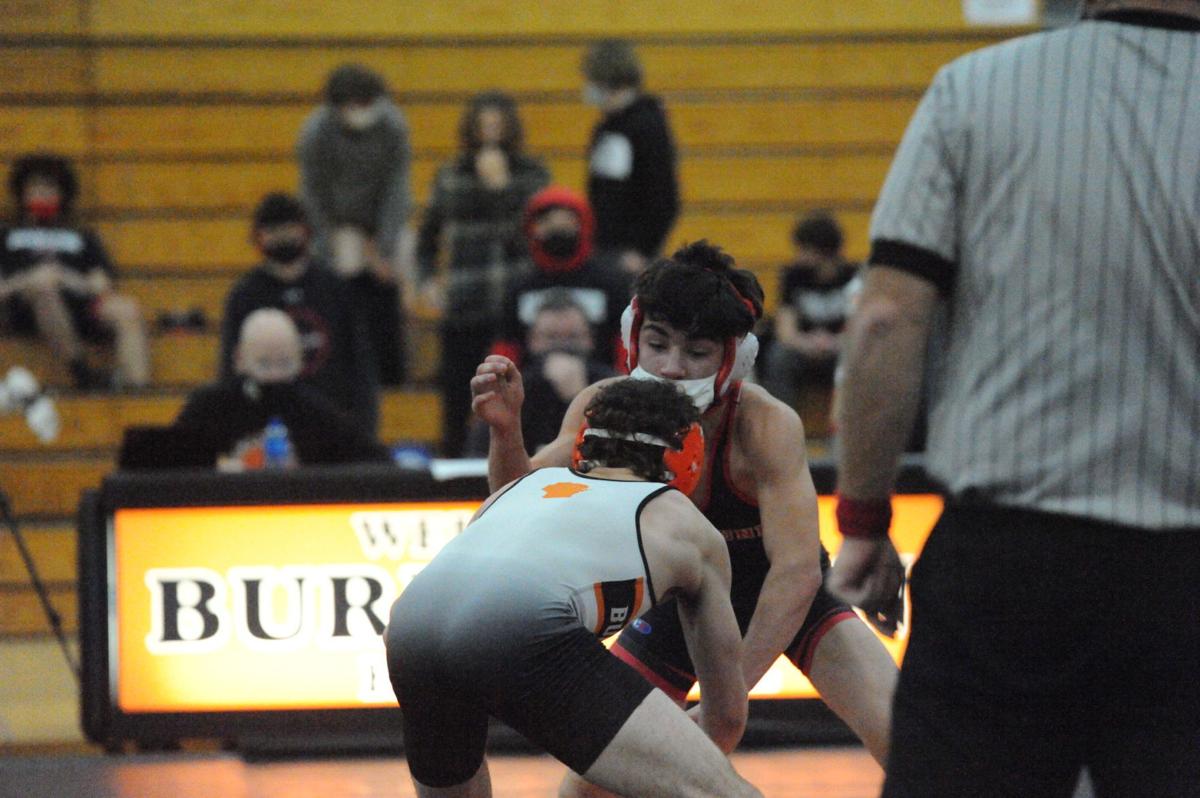 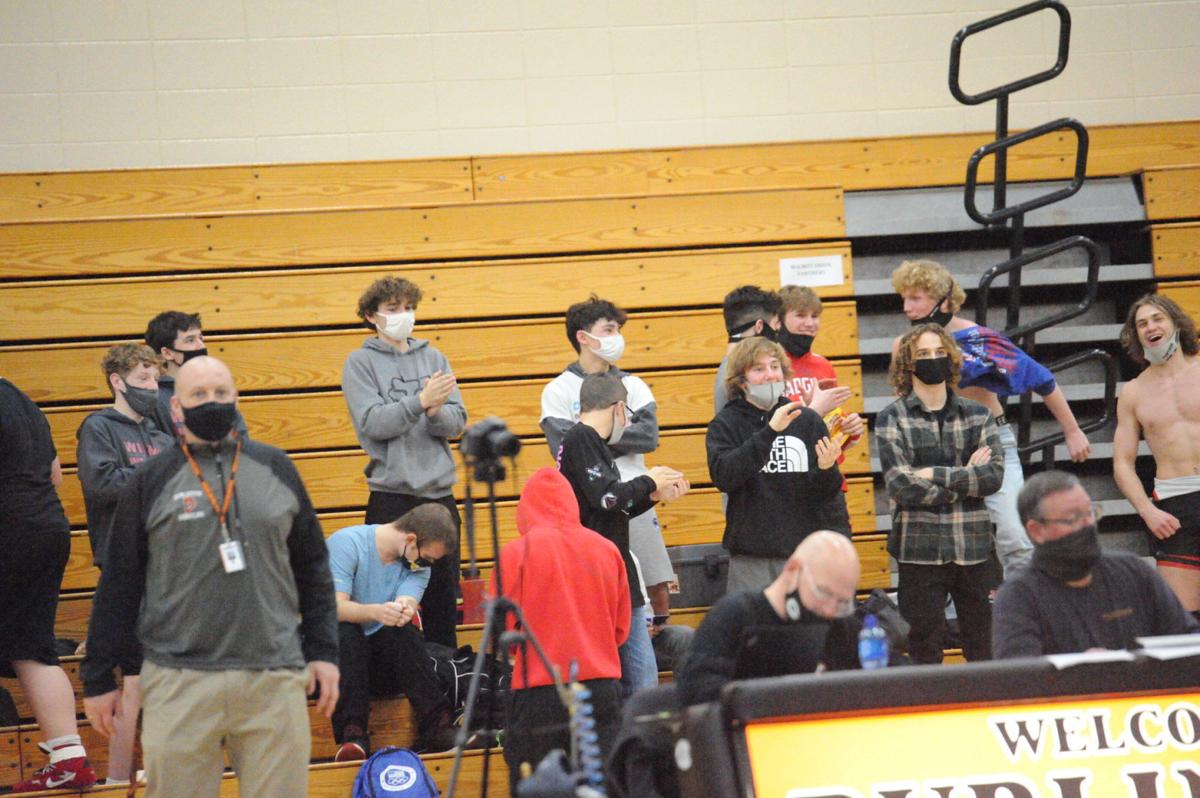 A sparse crowd watching a high school wrestling meet at Burlington on Thursday. For results, see Page B2. 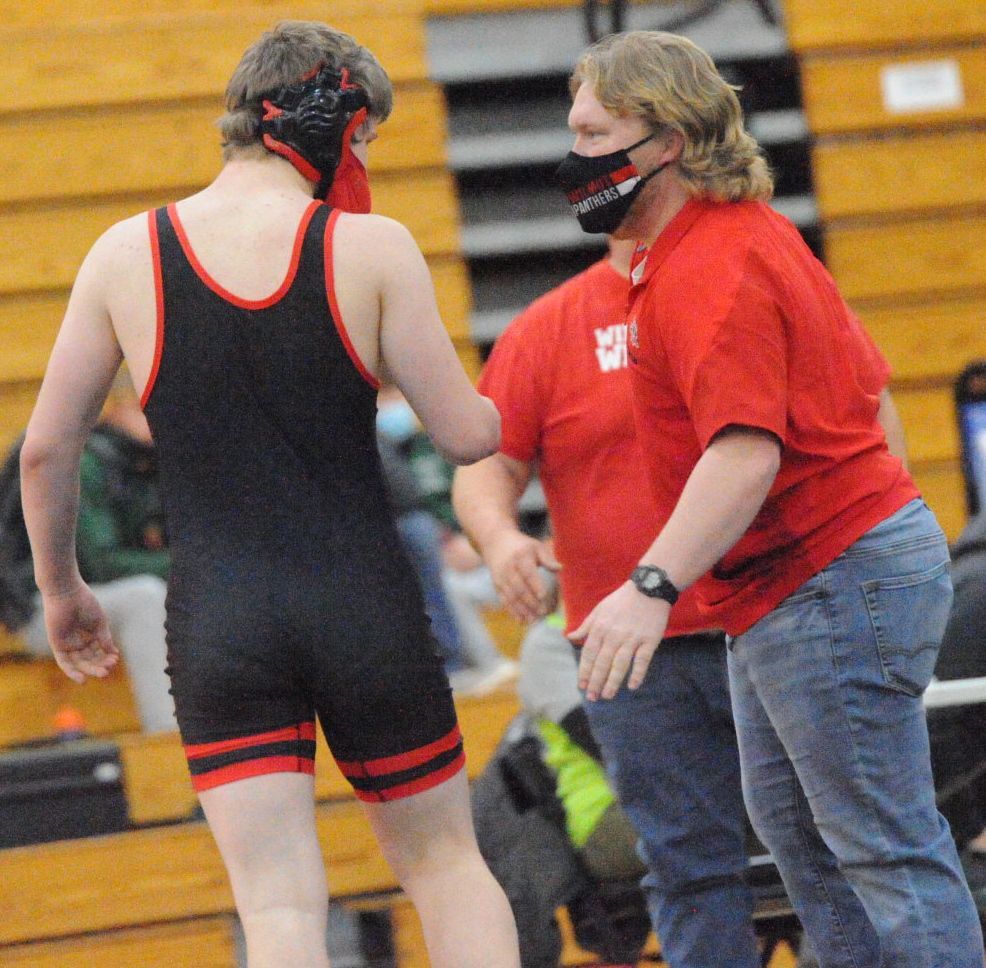 Wilmot wrestling coach Brian Hopkins, right, talks with Mitch Norvalis during a meet at Burlington on Thursday night. For results, see Page B2.

As normal as it sounds, there were four high school wrestling teams in the same place at the same time.

You may recall, however, that to begin the high school wrestling season there were strict rules on the amount of people allowed in a gymnasium at once, so only conference duals were allowed.

Well, in late December, the Wisconsin Interscholastic Athletic Association changed its social distancing rules for wrestling, allowing triangulars and quads, making it possible for three or four teams to compete in duals in one night at the same venue.

Now, student-athletes who’ve been starving for competition because tournaments aren’t allowed this season are finally getting a chance to have multiple matches in one night.

The change is paramount to success, said Burlington head coach Jade Gribble, because the WIAA maintained its rule of six days of rest between competitions.

“WIAA gave us rules, and then on Dec. 21 we found out we could do tris and quads,” Gribble said Thursday night after the final match. “You can host it because you can spread everybody out. All the parents I’ve talked to, they know their son wrestles and busts his butt every day, so I just want kids to have opportunities.”

A prime example is Burlington senior Zach Wallace, who at 195 pounds has only wrestled five matches this year after falling in the WIAA Division-1 state title match at 195 last season.

Whereas a wrestler of Wallace’s caliber and aspirations of state gold would have a good 15 to 20 matches under his belt by mid-January thanks to large tournaments and non-conference action, that’s simply not the case this year.

But the new rule to allow more people means more matches in one night.

At Burlington on Thursday, the wrestlers, coaches and two fans allowed per wrestler, along with various other students and maintenance staff, added up to more than 100 people in the gym. Still, the use of the entire field house allowed for three mats side-by-side and plenty of social distancing.

For Wilmot, the change in atmosphere led to its best night of the season.

The Panthers, under first-year head coach Brian Hopkins, won their first dual of the season, 45-30 over Lake Geneva Badger, before falling to Burlington later in the night, 53-27.

Wilmot (1-4) will host a double dual on Thursday night.

“COVID has put a hamper on a lot of things for these kids, and having their first win of the season was very fun to watch and really got them excited to keep getting better,” Hopkins said after the Burlington match.

Hopkins added that Sullivan is the team’s most complete wrestler and is fun to watch.

Captain Joey Devall, meanwhile, is 4-1 on the season at 285, and Hopkins calls him the “hardest worker in the room.” At 152, Mason Diedrich is a four-time varsity wrestler, while Gabe Handorf is a great role model for the underclassmen, according to Hopkins.

As for Thursday night, Jack Johnson went 2-0 at 113 pounds, including a pinfall victory against Badger in 3 minutes, 36 seconds. Against the Demons, Johnson battled Brody Toledo in a tight contest, edging him for a 4-2 decision.

“With COVID precautions, it’s always hard with a mask,” Johnson said. “Everything’s been pretty fluid. We haven’t had to do a lot of changes. We’ve been able to keep the season going. This is mainly my first year on varsity competing in duals. I’m going to try and win conference.”

Toledo said it’s exciting to have Hopkins as a new coach to take over for John Watson, who coached more than 30 years.

“Personally, I love ‘Hoppy,’ he’s a great motivator,” Johnson said. “He keeps us in shape. I am in the best shape I’ve been in at Wilmot, and I’m a junior. Not doing the tournaments keeps up the pressure for matches, but I can’t complain. We’re just trying to get in as much as we can.”

Johnson held a bag of what he called “Churro balls,” a treat given to him by a teammate’s mom after the match.

Nice gestures like snacks after meets and collaborating to roll up the mats and put them away after the event Thursday night made up for the fact that seating is still limited to two fans per student-athlete, making deafening student sections and packed houses a thing of yesteryear at the moment.

Hopkins was certainly pumped up himself after the Panthers got their first win.

“Every single match, we keep getting better and better,” he said. “It feels good. Big shoes to fill from John Watson — it’s difficult filling in for a great coach, but I have great assistant coaches around me. Jade Gribble has been a great mentor for me. He and I are on the phone texting and chatting pretty often. He wants to move wrestling forward.

“I thought it was a good opportunity for me to step up after coaching for Watson last year. We have a solid foundation and tradition built.”

Hopkins concluded with thoughts on the pandemic-altered season, where the Panthers have been lucky to compete.

“I like the double duals because it allows everyone to get their conference duals in,” he said. “As they see other sports be successful with the criteria and guidelines, moving forward we can keep doing these bigger events. We haven’t had to deal with coronavirus yet (among the team).”

A sparse crowd watching a high school wrestling meet at Burlington on Thursday. For results, see Page B2.

Wilmot wrestling coach Brian Hopkins, right, talks with Mitch Norvalis during a meet at Burlington on Thursday night. For results, see Page B2.